Dean Martin the titan of stage and screen was also a titan of the west Hollywood party scene in the 60s and 70s. This is evidenced by a quick look through his famous home in Palm Springs known eponymously as the “Tea Dance House.” We can almost hear the echoes of what might have been the most epic cocktail parties in America. 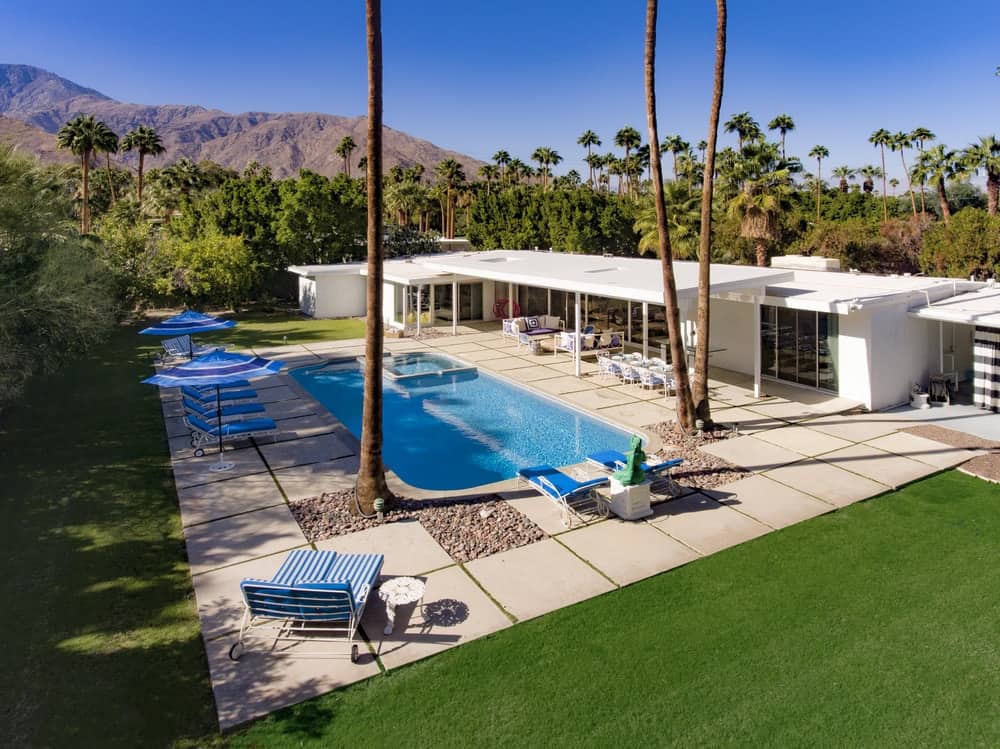 Anyone who knows the first thing about American comedy is familiar with the legend of Dean Martin. A star of the stage, screen, and a roast-primary supreme, Dean Martin has been called “the King of Cool” by his friends and contemporaries. He managed to walk the line between groundbreaking comedy and maintaining a place in the hearts of mainstream America in the 1940s and 50s.

Martin passed away in 1995 at age 78, but his legacy lives on- partly in the form of his $1.8 million home in Palm Springs, CA. Known as the “Tea Dance House,” the Martin home has a 2,342 square foot floor plan and has all of the markers of high style and class that were typical of the 1960s. It was a primary hangout for the “Rat Pack” of which Martin was a ranking member, and it’s easy to see why with its lavish and easy-going pool area, backed by the long profile of the building itself.

Stepping into the main living area, one gets the impression of having died and gone to heaven, and that God is a jazz piano fan. The room is big, wide, and open with white walls, floors, and ceiling, mirrored pillars and an arched ceiling reminiscent of a wooden longboat.

The long open room has a row of sliding glass doors which open to the pool area, making the barrier between the indoor and outdoor area vanishingly transparent. It has the effect of conjoining the indoor and outdoor areas, making them amenable to roaring cocktail parties with huge guest lists. It’s likely that every major celebrity of the time has walked these spaces at least once.

Aside, and naturally attached to, the living/party area is a brightly colored and glass-heavy sitting room. Ocean blues and foam whites swirl under the influence of a mural of the same color pallet. A simple, white brick fireplace stands at the far end to help ensure that this spot is for sitting- whereas the rest of the space is clearly intended for mixing things up.

Around a slight corner from the sitting area- though still firmly attached- is a dining area which is a little more grown-up than the rest, but not by much. The chairs are large, white, and cushy while the table itself is rather small. It’s an interesting contrast, considering the size and complexity of the kitchen.

A 15-eye gas stovetop stands on an island in the center of the kitchen and a two-stack of ovens is arranged off to the side. Clearly, this kitchen was designed with culinary showmanship in mind. It’s likely that many celebrity chefs had the honor of testing their skills here. It certainly would have been a wonderful thing to see.

A separate, finer dining area is around the corner, disconnected from the sprawling party area. With glass, wood, and tasteful lighting, this appears to be a place where the food matters most.

There’s no doubt, Dean Martin and his friends enjoyed the heights of style and society here. If only one could go back in time and be a fly on the wall…