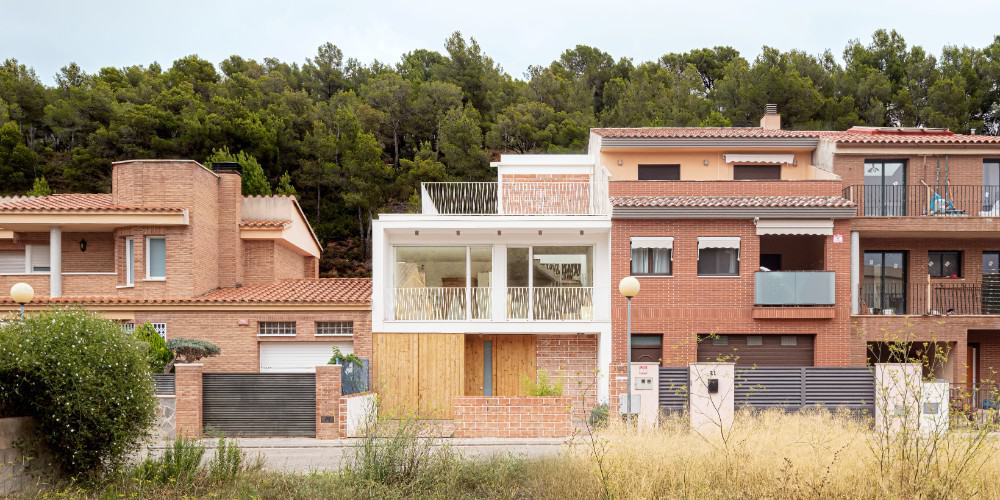 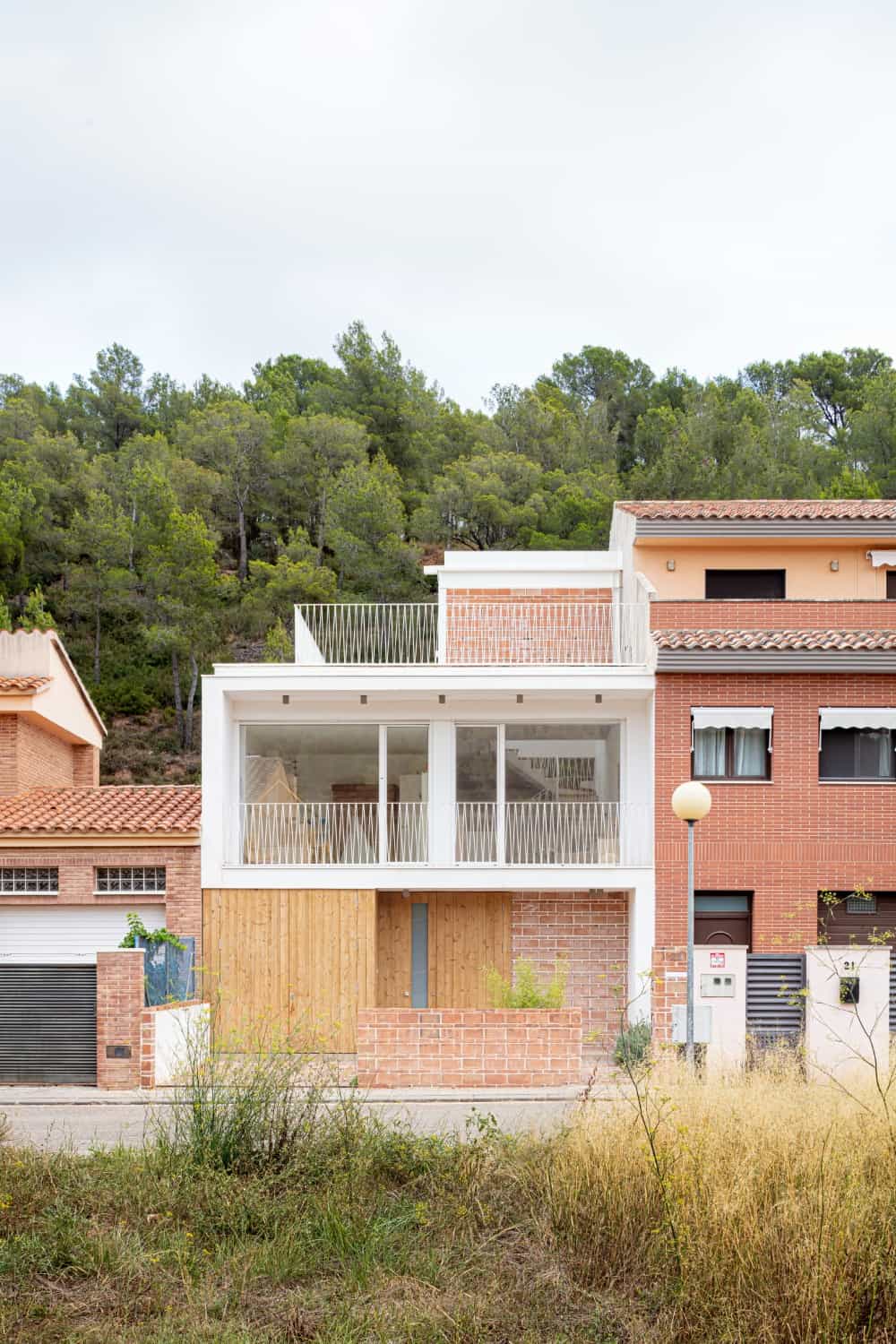 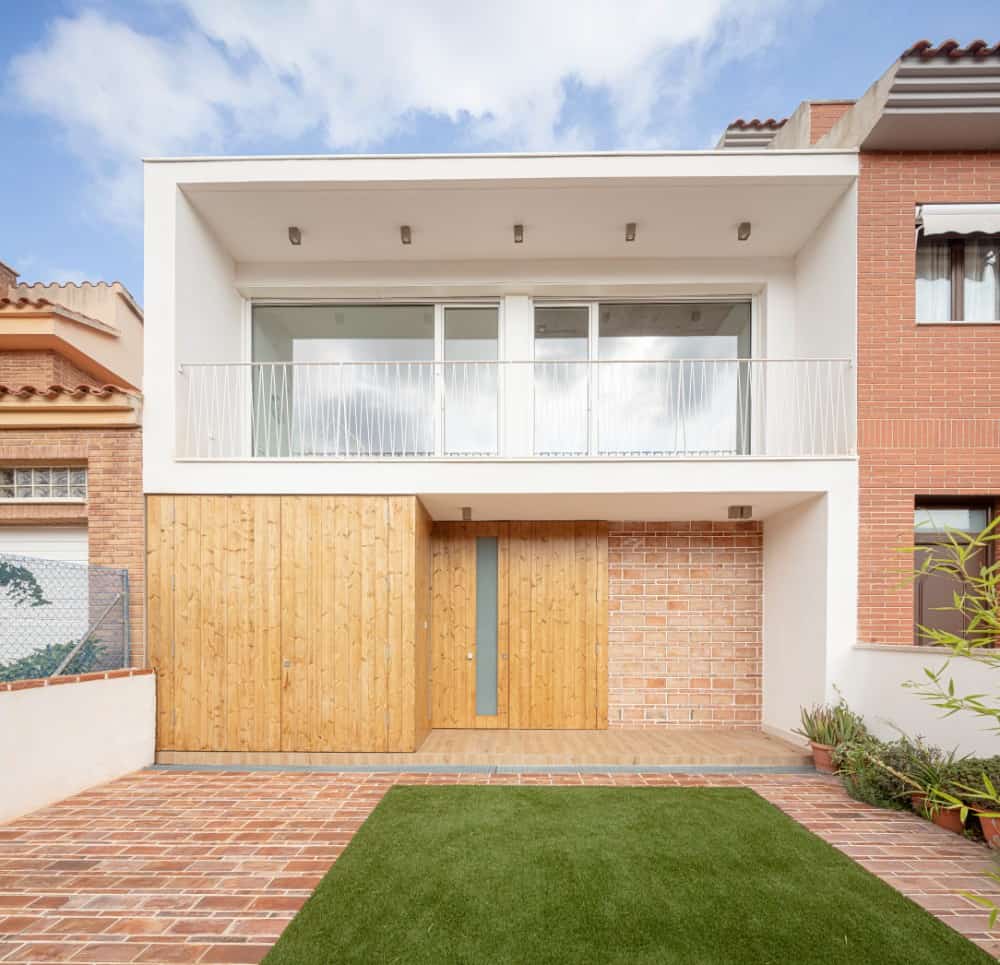 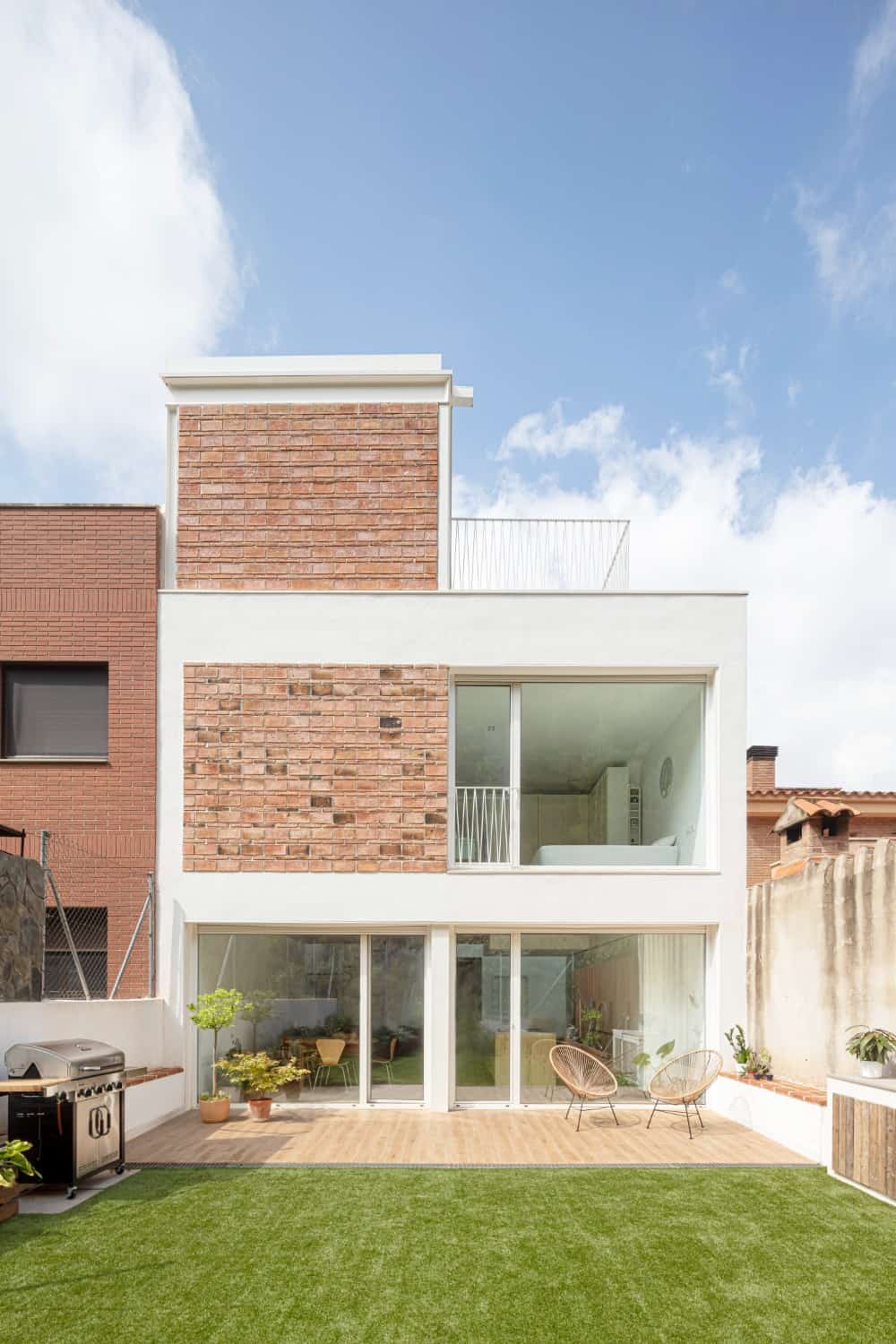 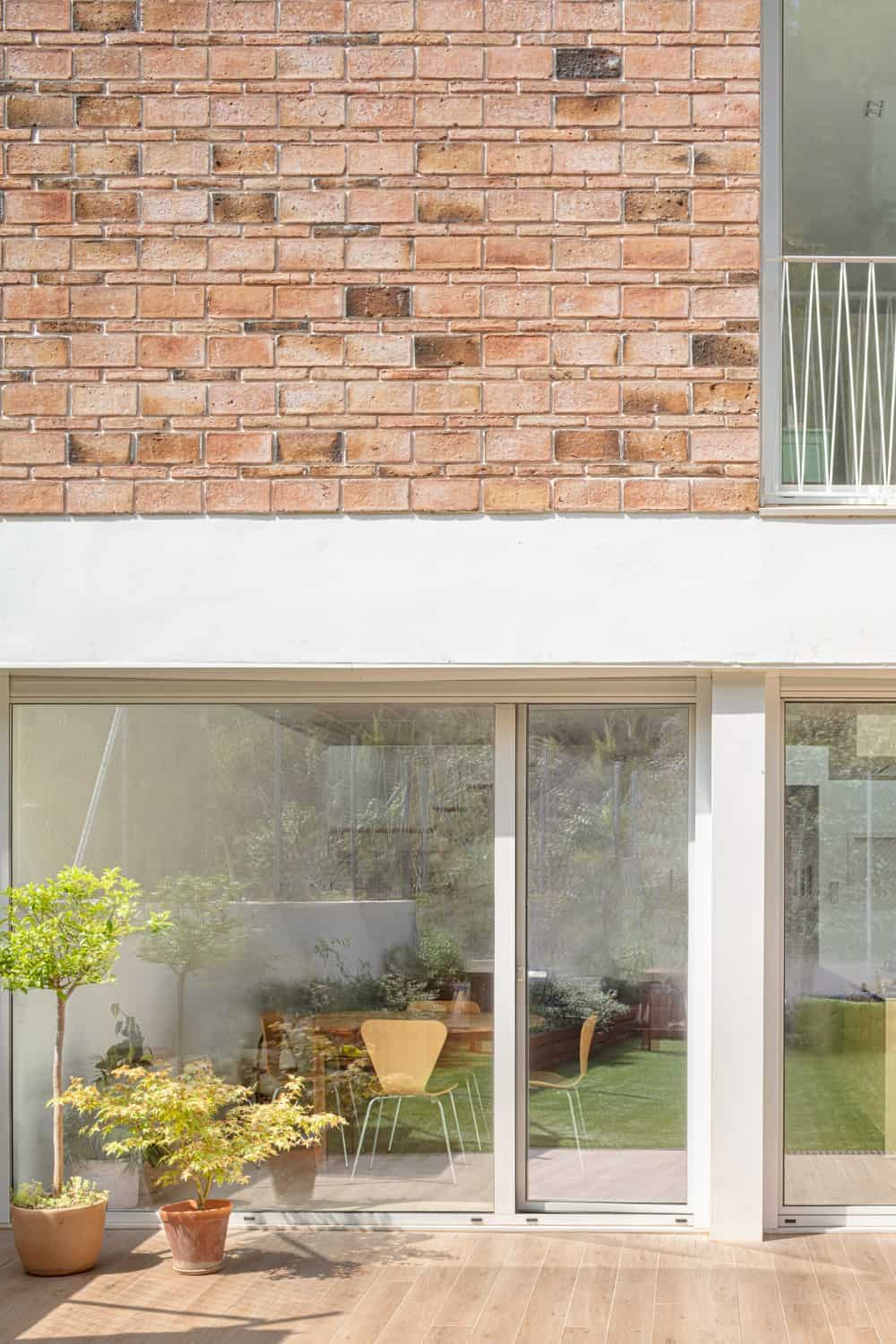 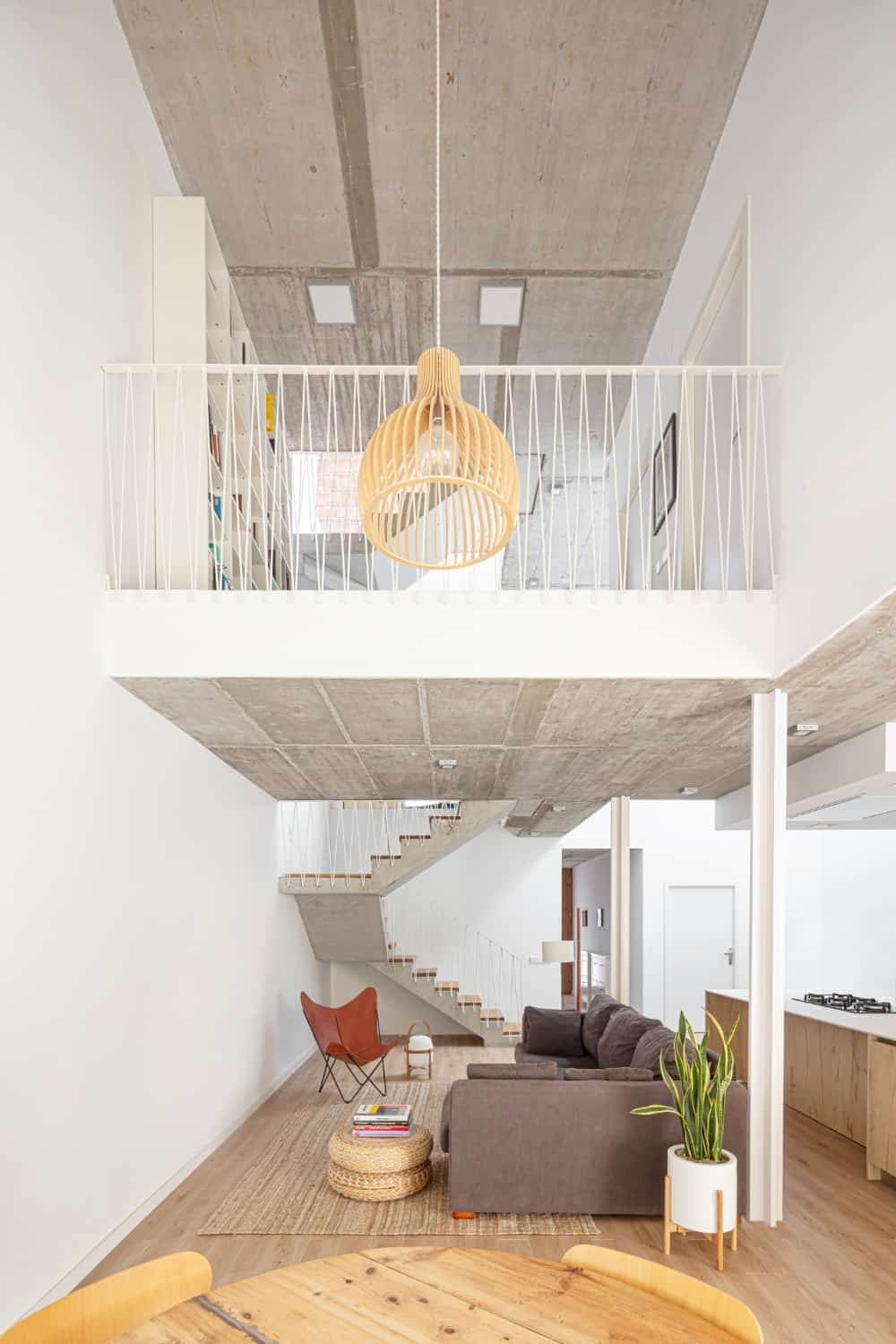 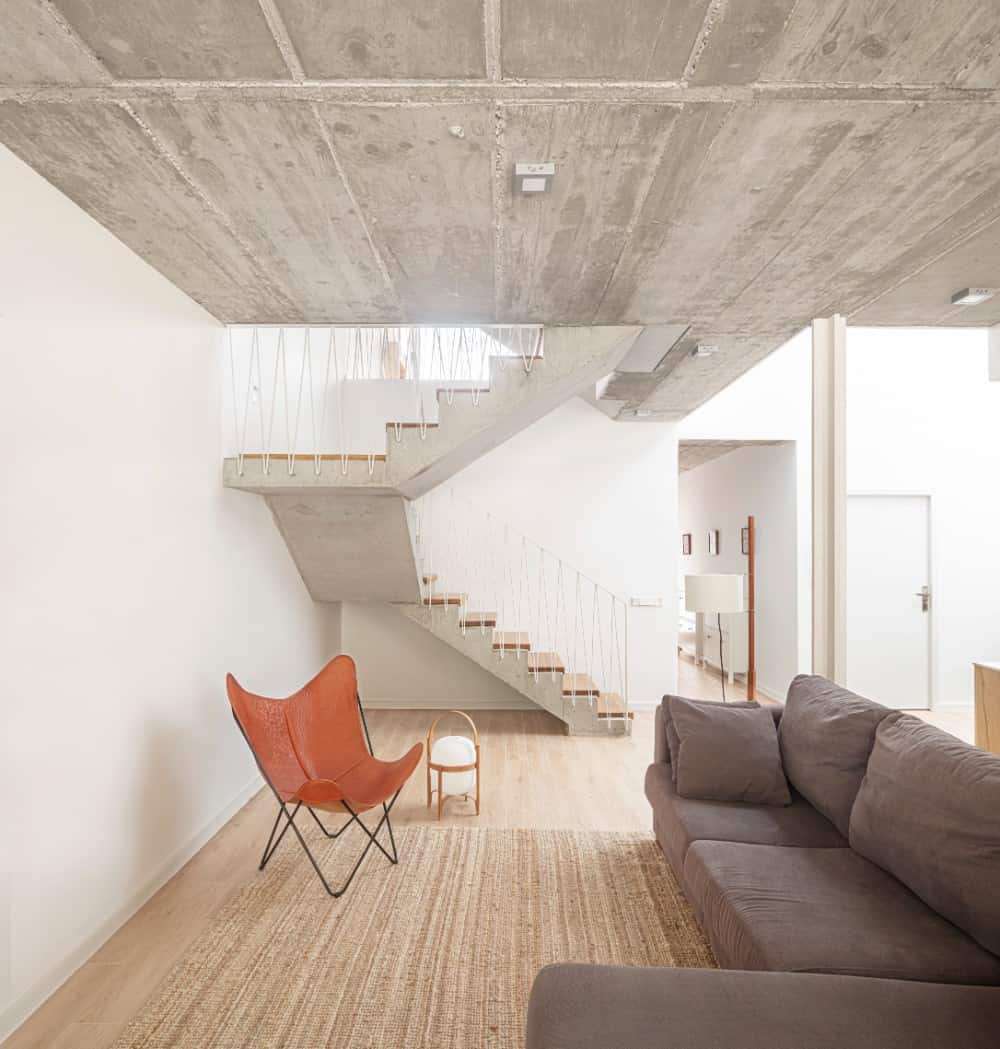 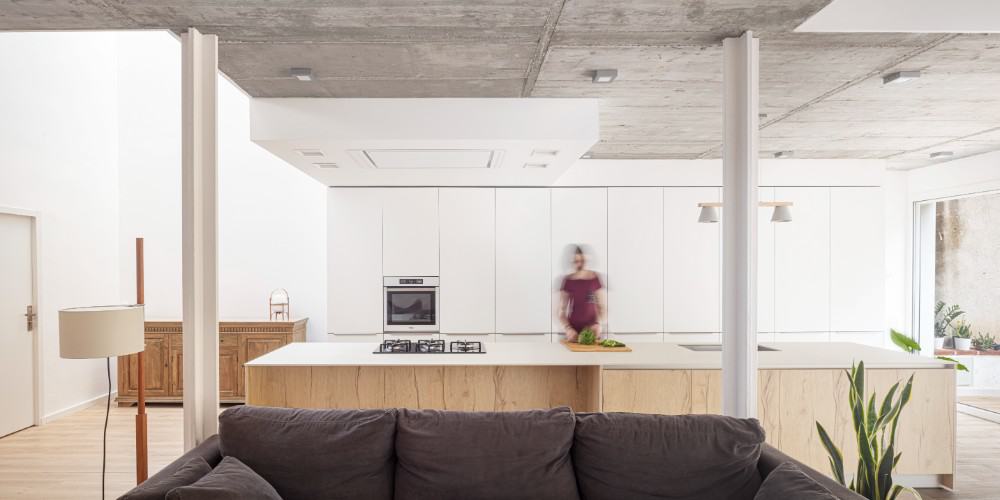 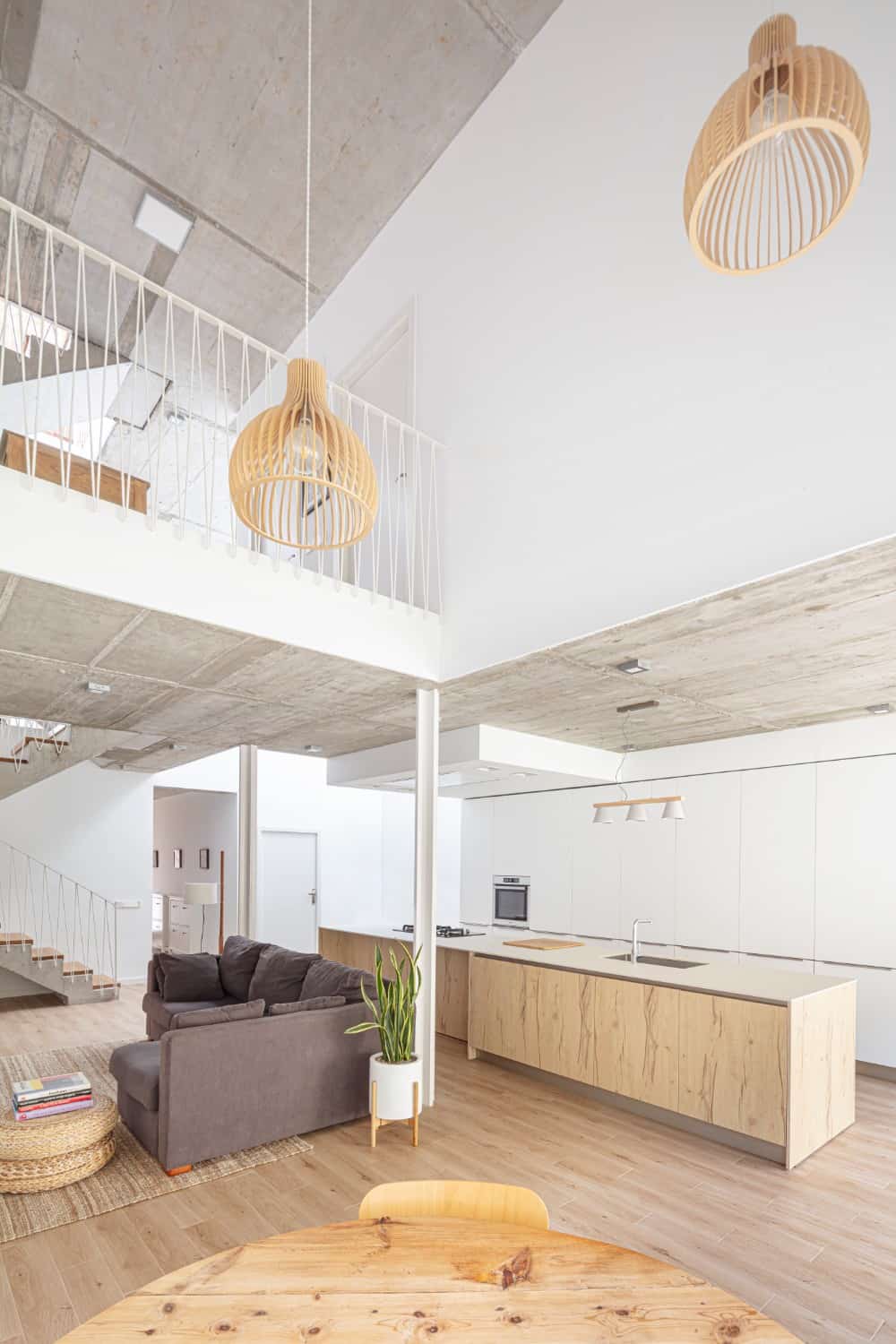 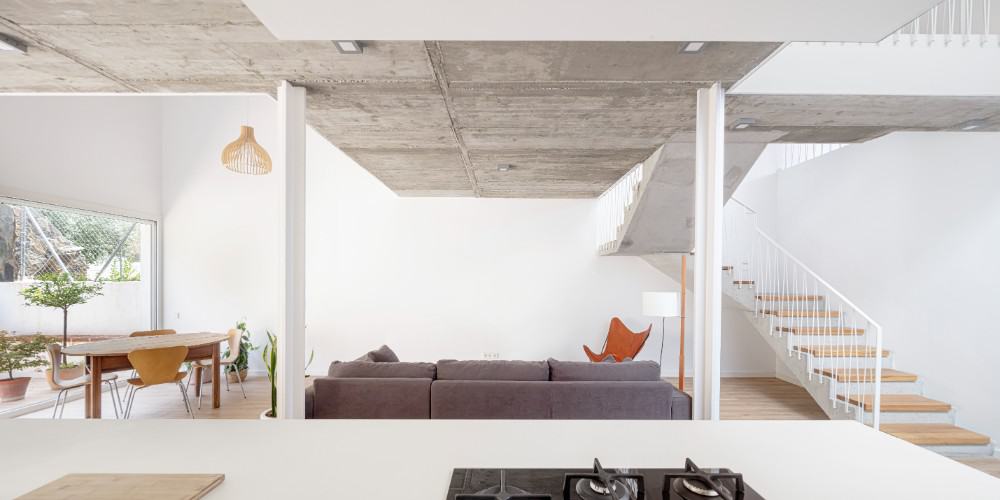 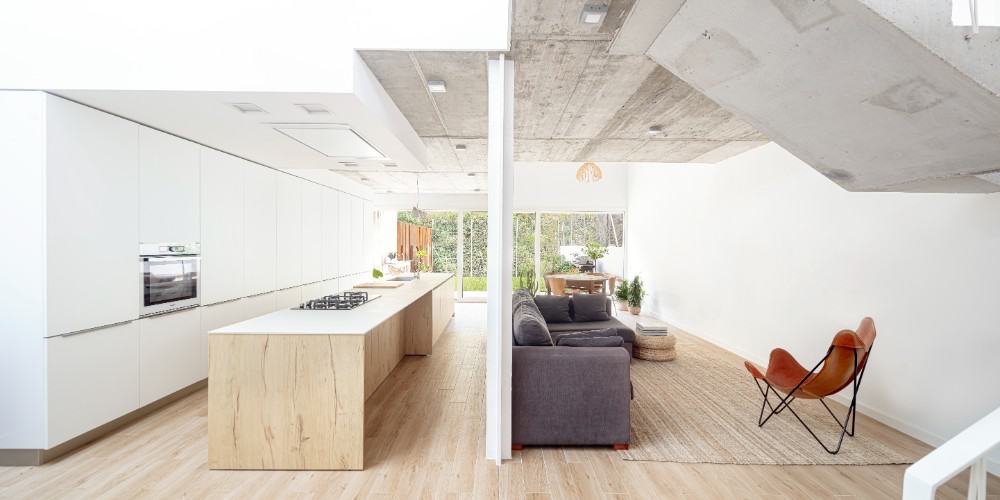 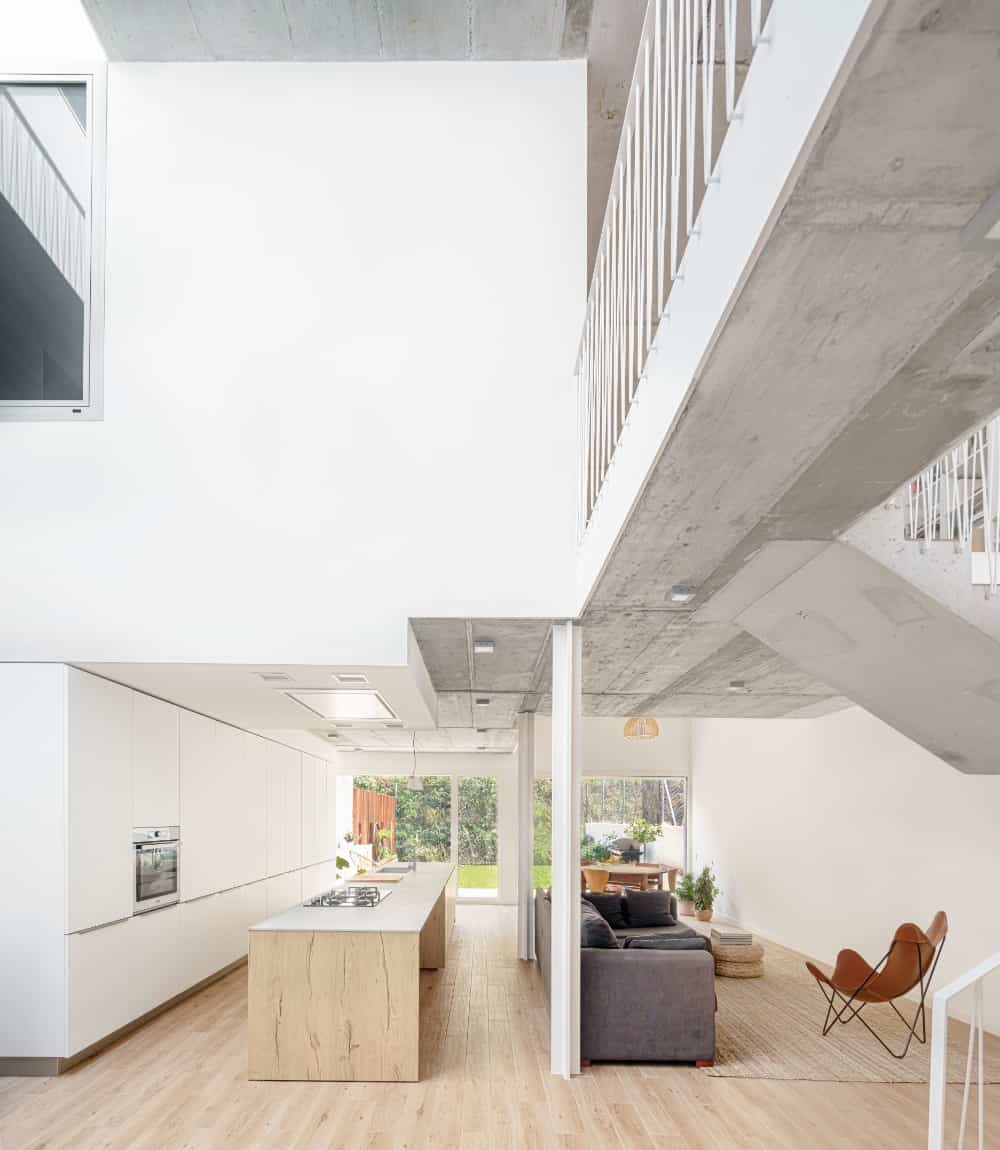 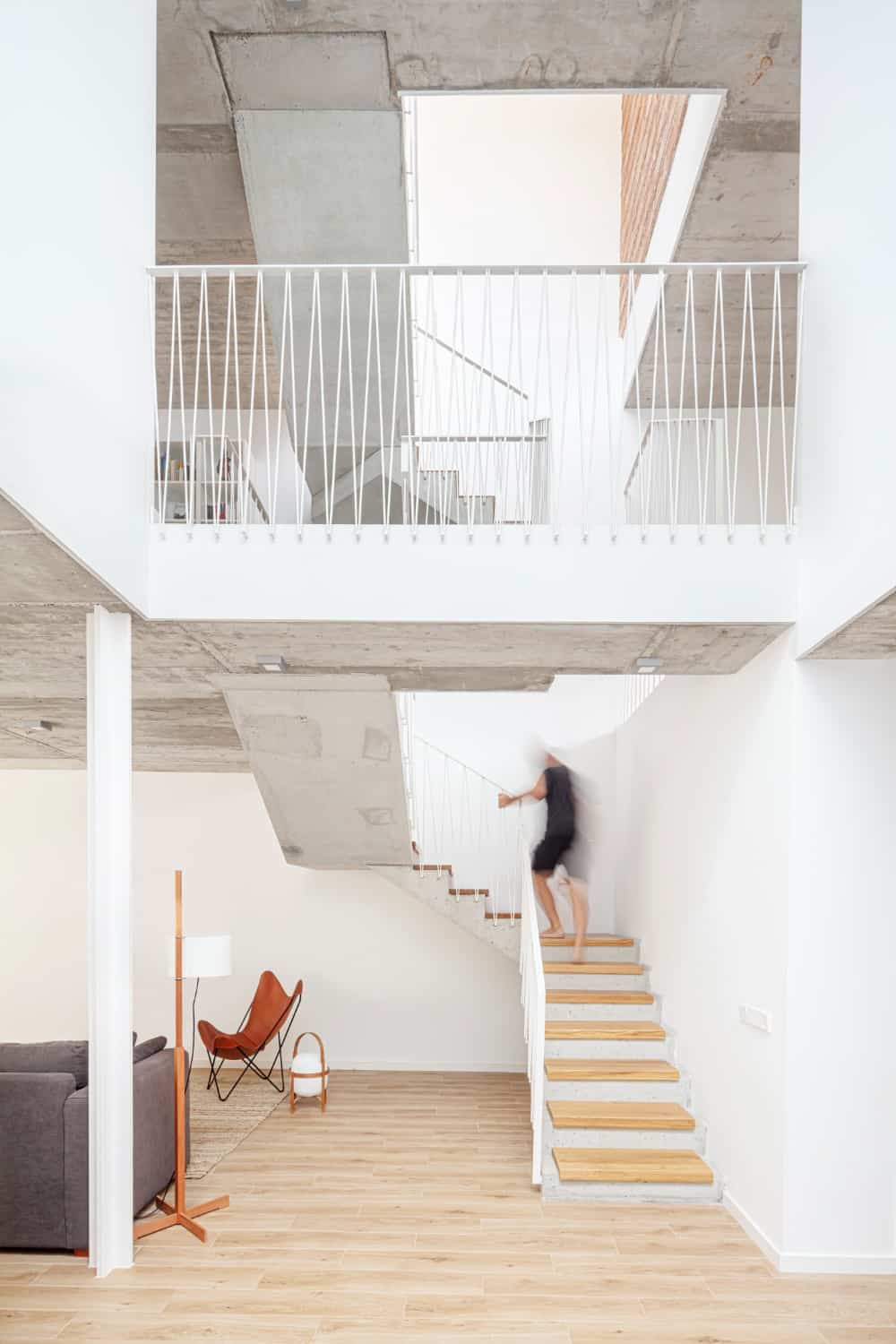 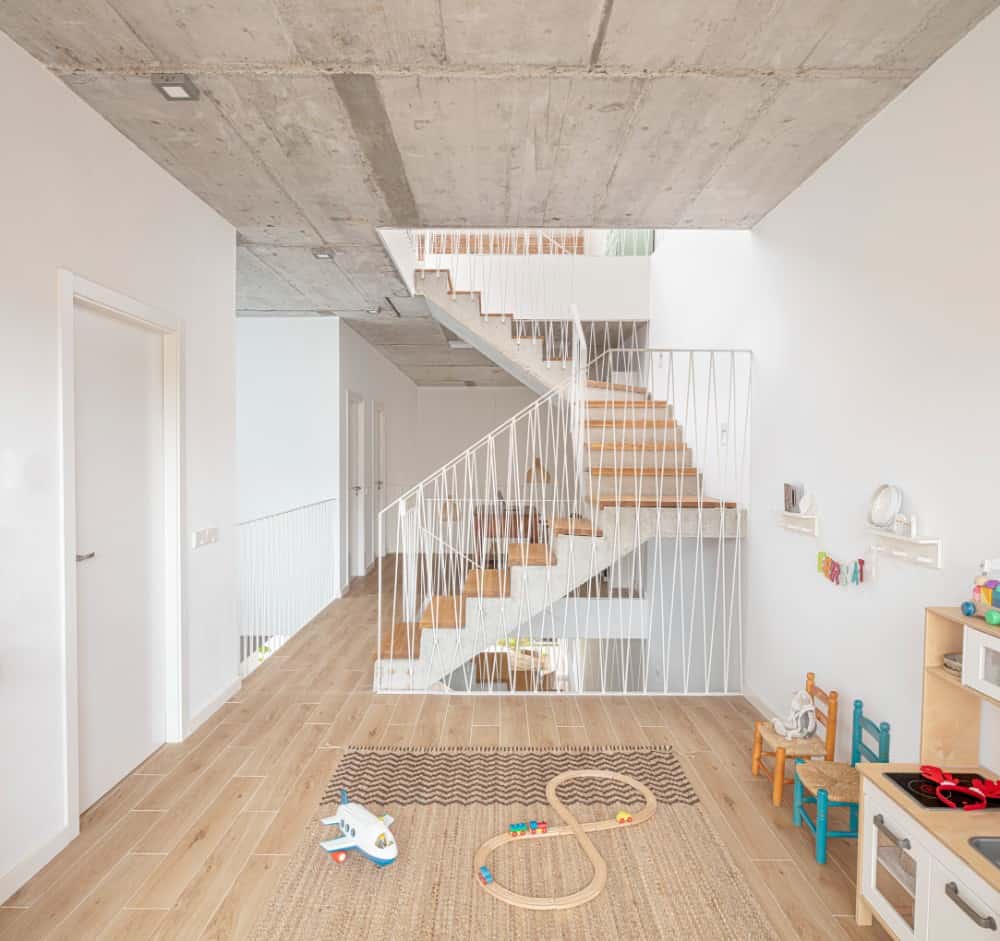 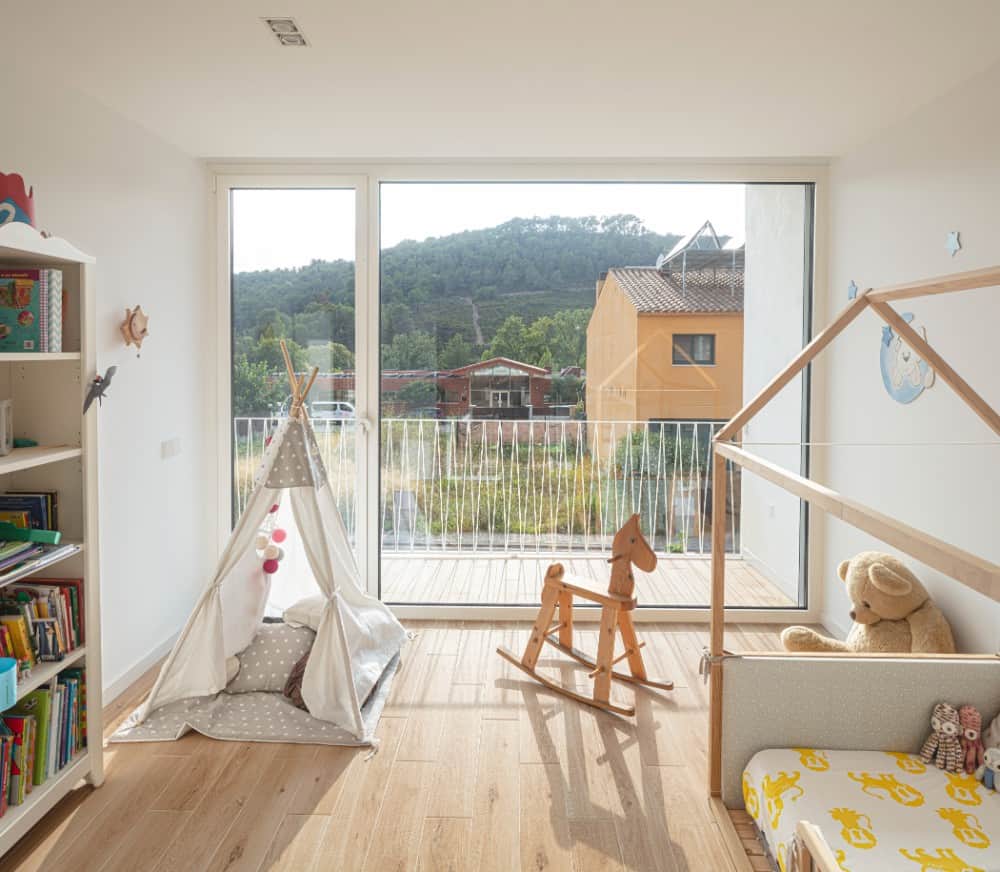 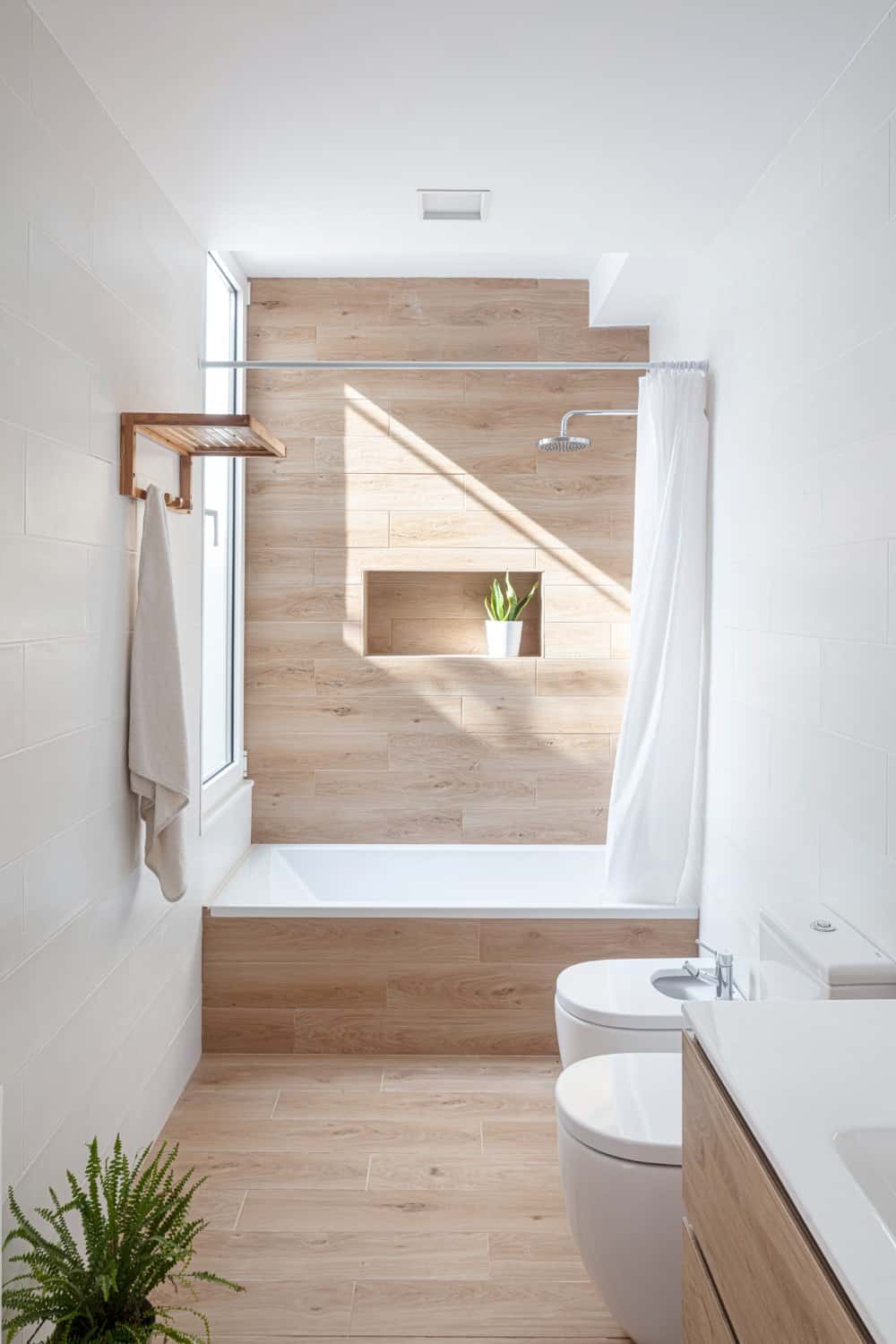 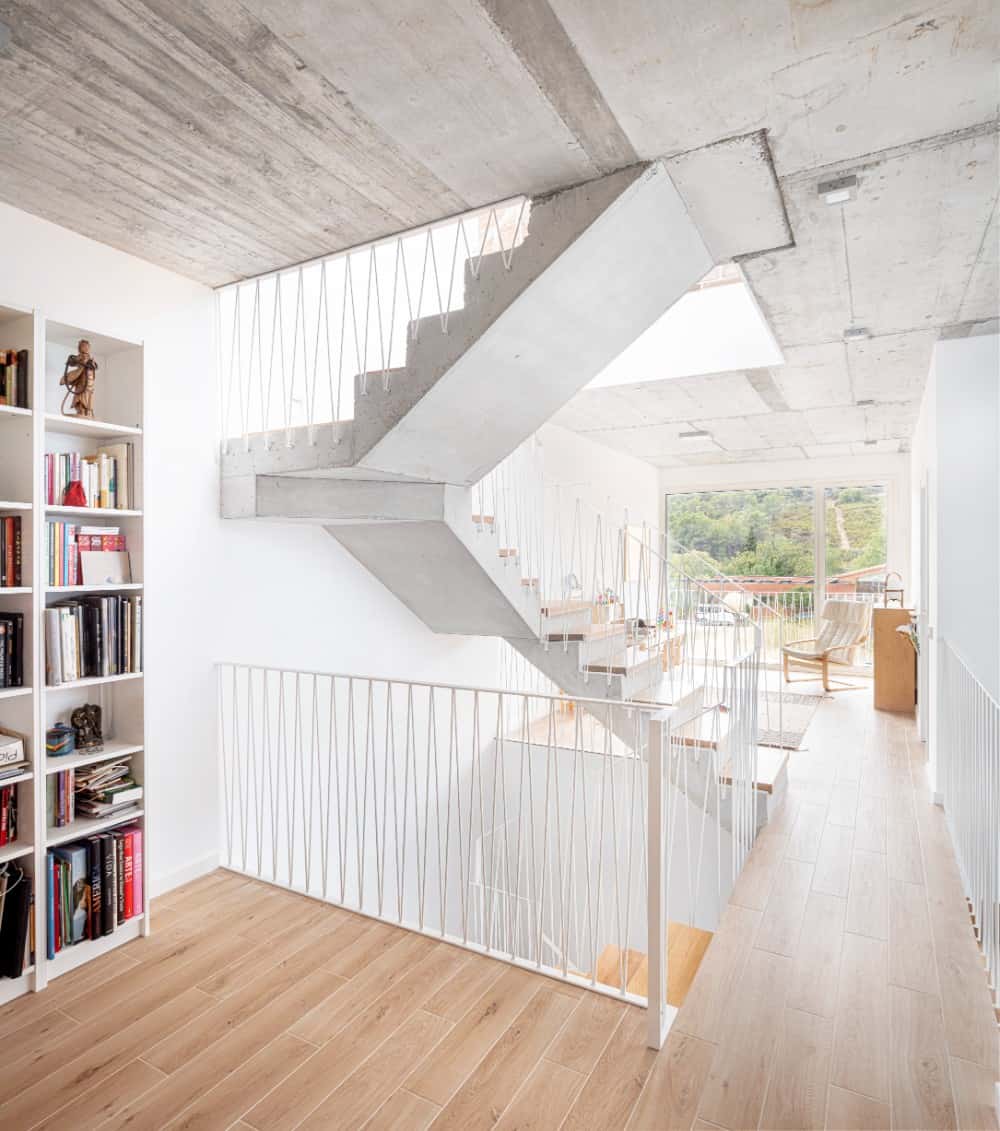 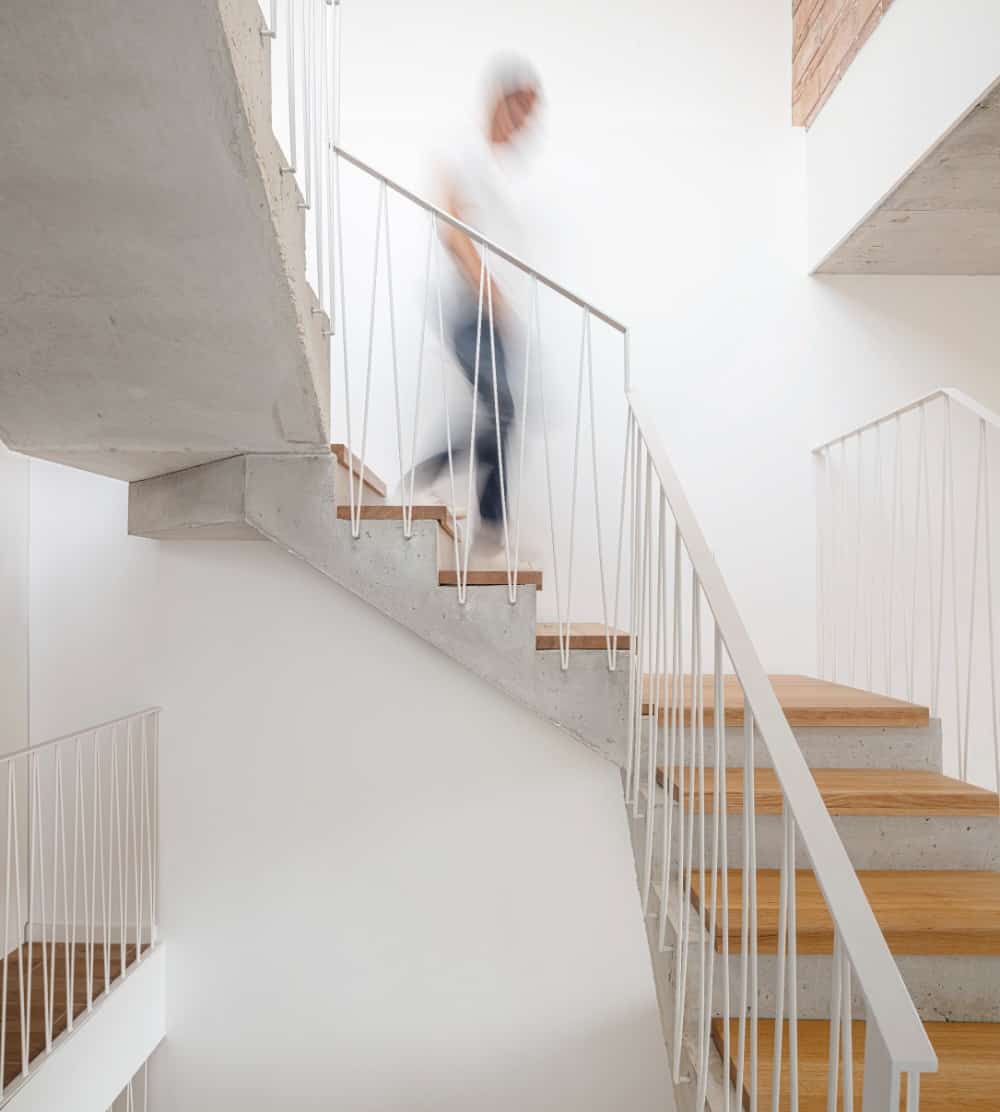 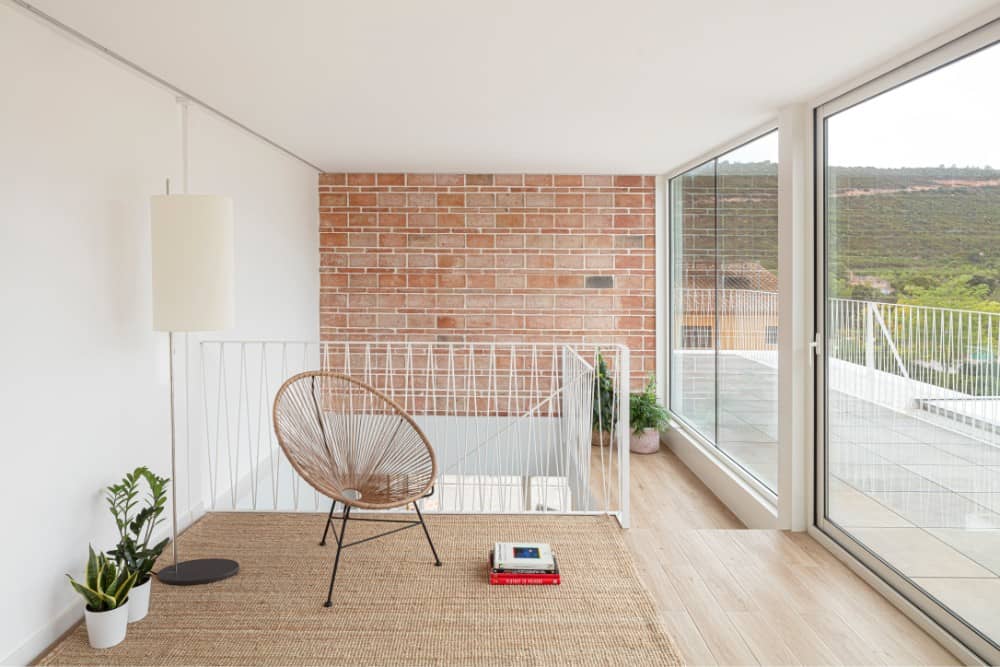 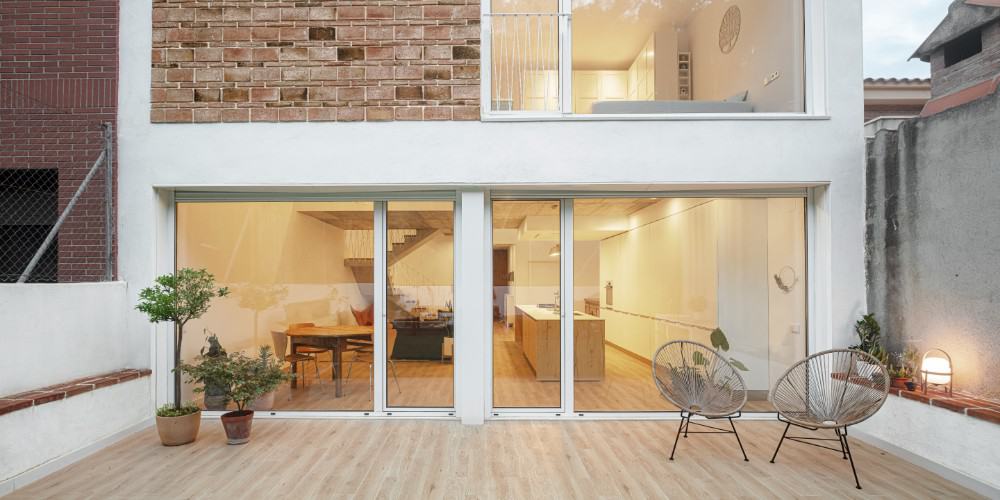 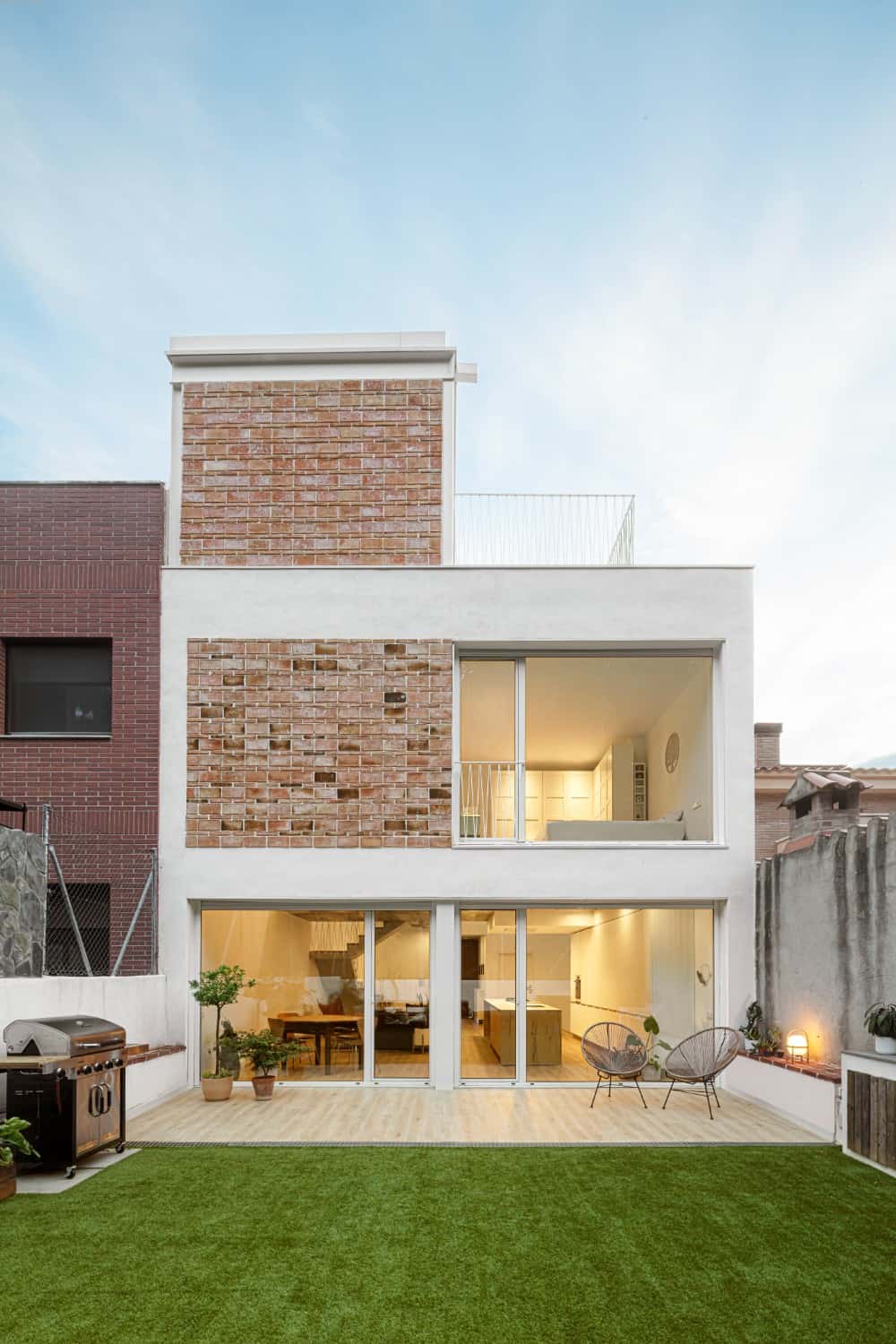 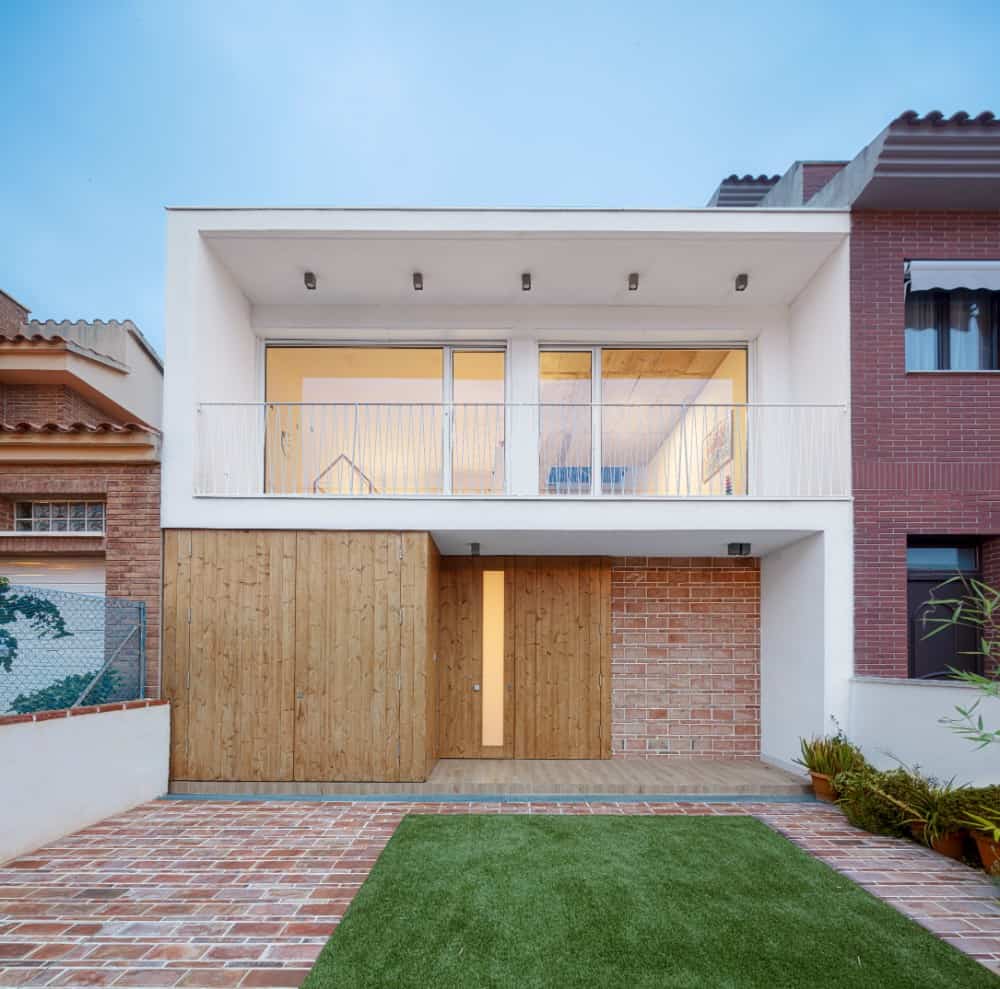 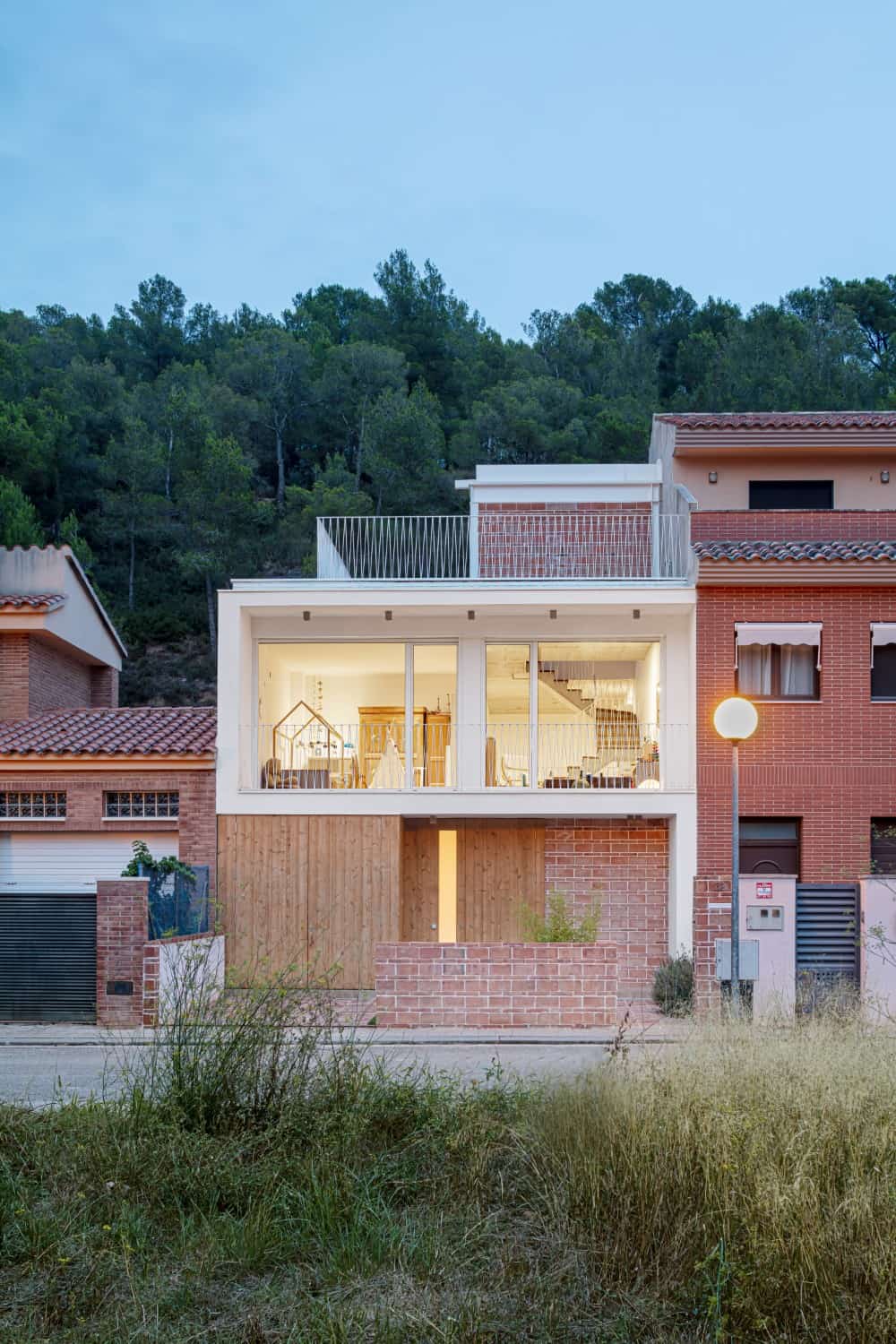 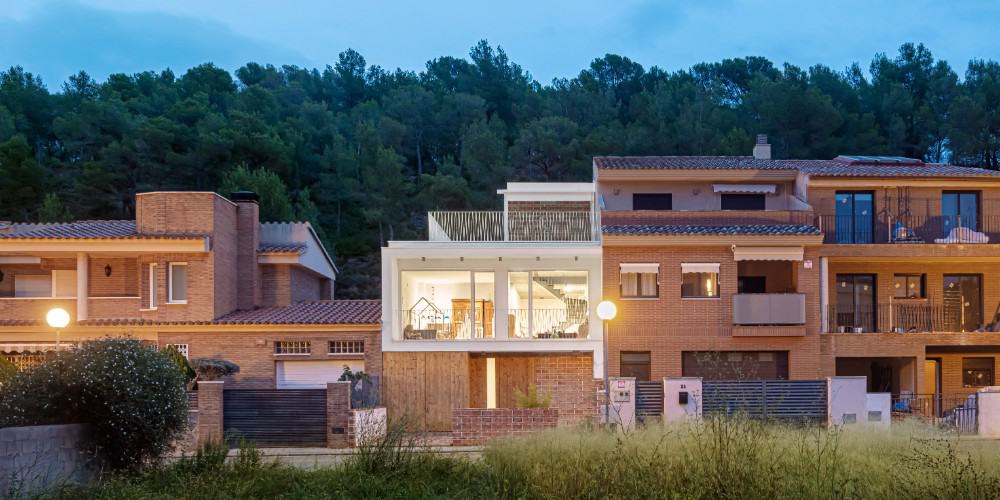 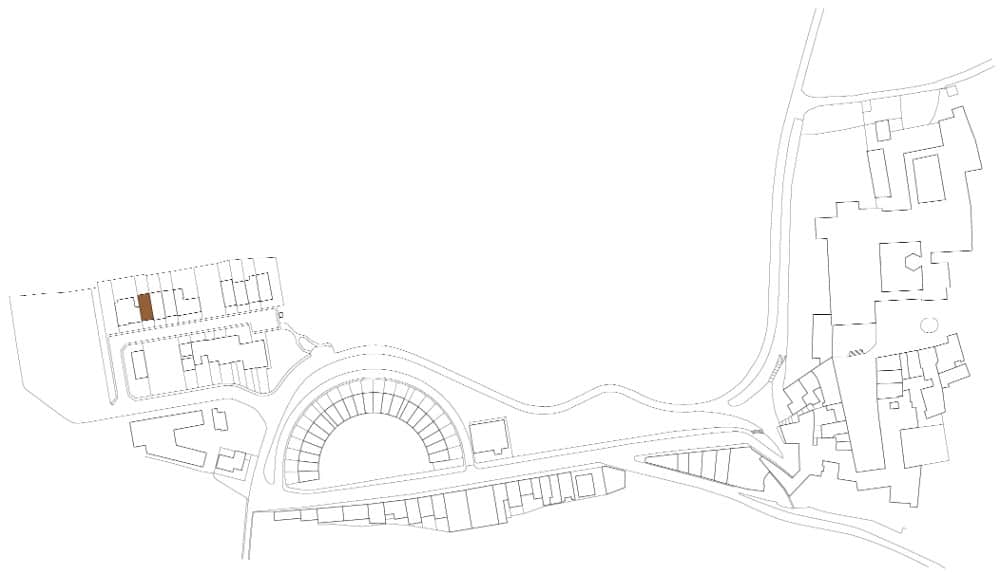 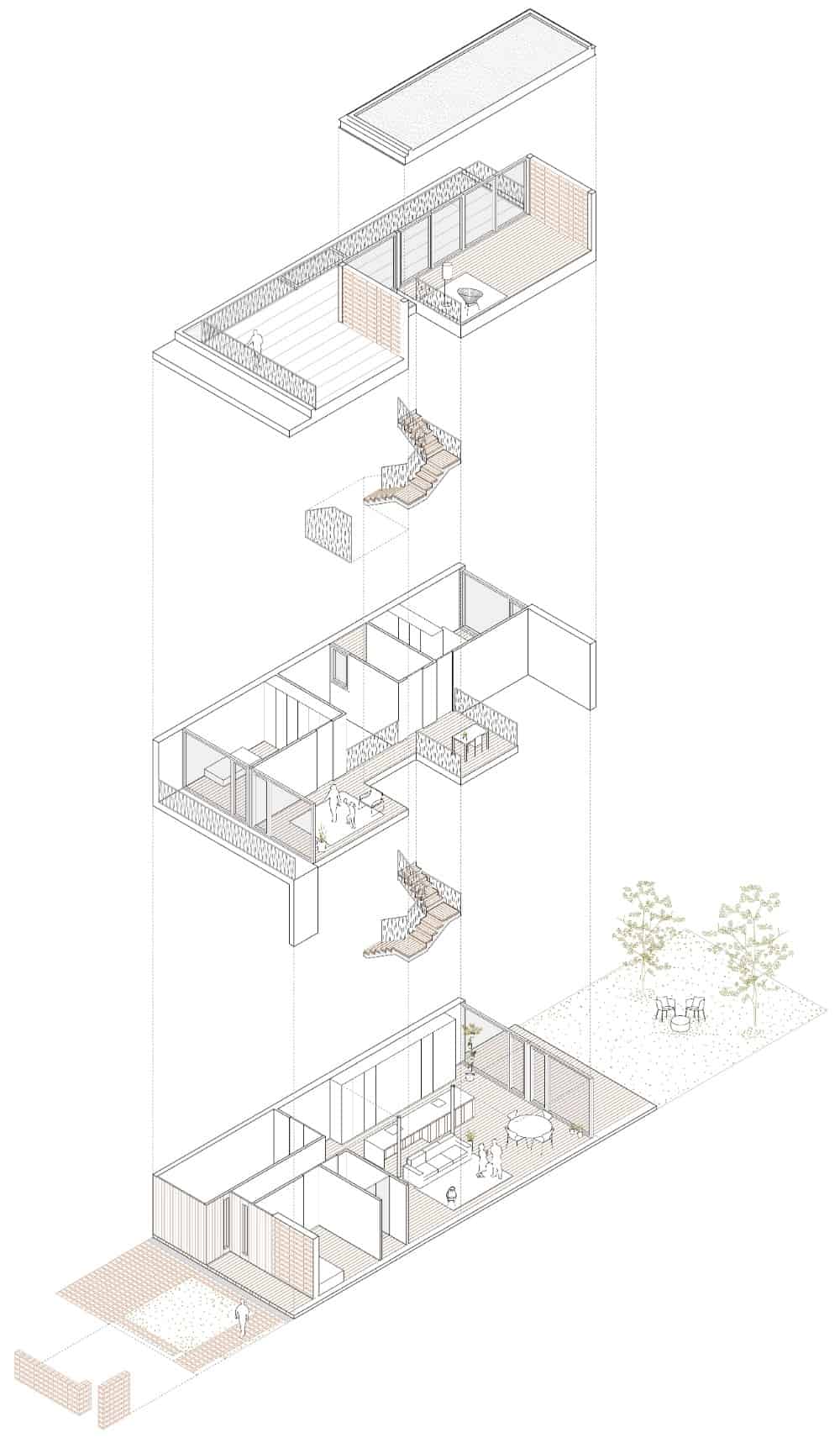 Santes Creus is the capital of the municipality of Aiguamúrcia. It is located on the left bank of the Gaià river, around the Real Monestir de Santa Maria de Santes Creus, one of the jewels of 12th century Cistercian art in Catalonia. Created in 1843 in the old monastery buildings, the town includes places of interest related to the monastic building such as the stone bridge, the Gothic cross, the small Baroque church of Santa Llúcia, and the old modernist cooperative winery.

Following the main street, which leads to the monastery, on the detour from where the Aiguamúrcia road leaves, there is the well-known Alameda de Santes Creus, unique as a riverside forest in all of Catalonia, declared a space of natural interest.

The location of this house is part of the expansion of the urban area that was developed in Santes Creus at the end of the 20th century and the beginning of the 21st century to obtain two public pieces for equipment and parking for visitors to the monastery. In addition, a new residential area of single-family homes was created between dividing walls, which has been consolidated over the last twenty years.

The observation and analysis of the two neighboring houses built in this area showed that the house located to the south makes optimal use of the property and the permitted building volume, therefore, largely covers the natural lighting perceived in our area. On the other hand, the house located to the north is built on two plots and has a shape and volume more typical of an isolated single-family house. For this reason, the widest views are the east view (the terrain borders on a mountainous elevation), the north view (because the neighbor has not used the entire volume and the buildable area, and therefore, from the second floor, the landscape of the area is widely perceived) and the western view (facing the street).

In response to this analysis, Casa 22 Avellaners has three unique strategies. First, placing a staggering volume that blends in with the different heights of the neighboring buildings. Secondly, connect this volume with the landscape through openings to the east and west views (on the ground floor and first floor) and to the north view (on the second floor, as soon as the height of the neighboring building is exceeded) in order to capture the natural light as well as possible and enjoy the best views.

And thirdly, create an empty and complete volumetric relationship between the different rooms inside the house, through the figure of three large cavities (two double spaces and one triple space) inside the full house (the built volume of the house).

This creates internal relationships, both spatial and visual connexions, which intend that the different spaces that make up the project are perceived as spacious, bright, and related to each other in an open and continuous way. To complement the natural light exposure, a skylight is placed on the roof of one of the double spaces, and the triple space where the stairs are located is visually connected to the multipurpose room on the second floor so that the central part of the house is naturally illuminated during the day.

The house articulates its vertical circulation structure through the staircase, which is the main protagonist inside. It is located in a specific place so that the connection with each of the three floors is optimal and this element participates in the differently designed spaces.

The ground floor contains access to the house and a linear connection on the visual and access level with the rear garden. On this floor we find a first strip configured by the garage, a room, and a bathroom; and a second strip that consists of a space that integrates the kitchen, living room, and dining room and also connecting with the second and third floors through the double and triple spaces, which visually and functionally connect the day area with the study and play area on the first floor and with the multi-purpose room on the second floor. Two rooms, a terrace and a bathroom on the first floor, and a terrace viewpoint on the second floor complete the program.

The volumetry was built in a mixed structure of concrete and steel without changing the original topography. On the outside of the house, materiality was chosen that results from the use of materials with traditional and proximity manufacturing and application techniques, such as lime mortar, artisanal ceramics, steel, and wood. The undeveloped areas were paved as little as possible in the areas near the house; otherwise, they were used for green spaces or for garden cultivation.

Inside the house, mostly exposed concrete has been left on the ceilings and internal stairs, which contrasts the thick texture of this material with the lightness of the steel that configures the transverse pillars on the ground floor and the railing. In addition to concrete and steel, various traditional wood and ceramic elements such as floors, wall tiles, and furniture are arranged, aiming to create bright, simple, practical, comfortable, and warm interiors that generate emotions for their users.

When designing this house, energy efficiency was a premise. This has been achieved through passive solar architecture solutions and indirect light detection which, together with the building system itself and an exhaustive study of the composition of the different skins of the building and its thermal behavior, have made this house has obtained an energy certification A.