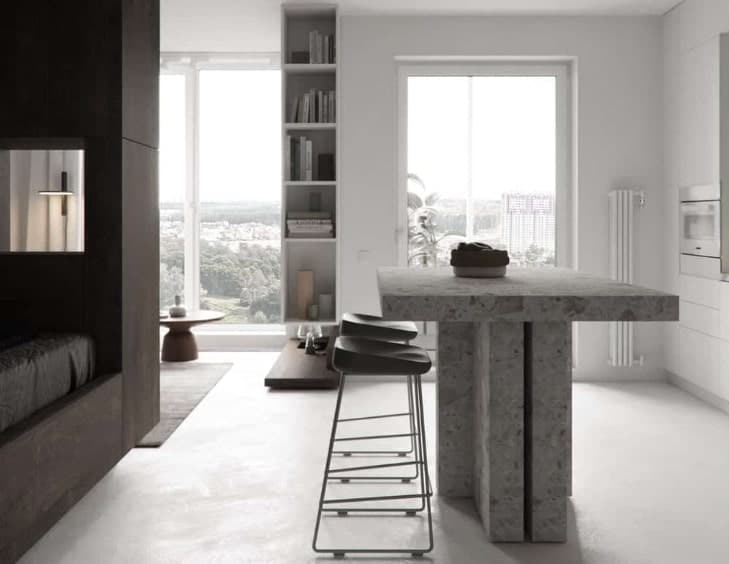 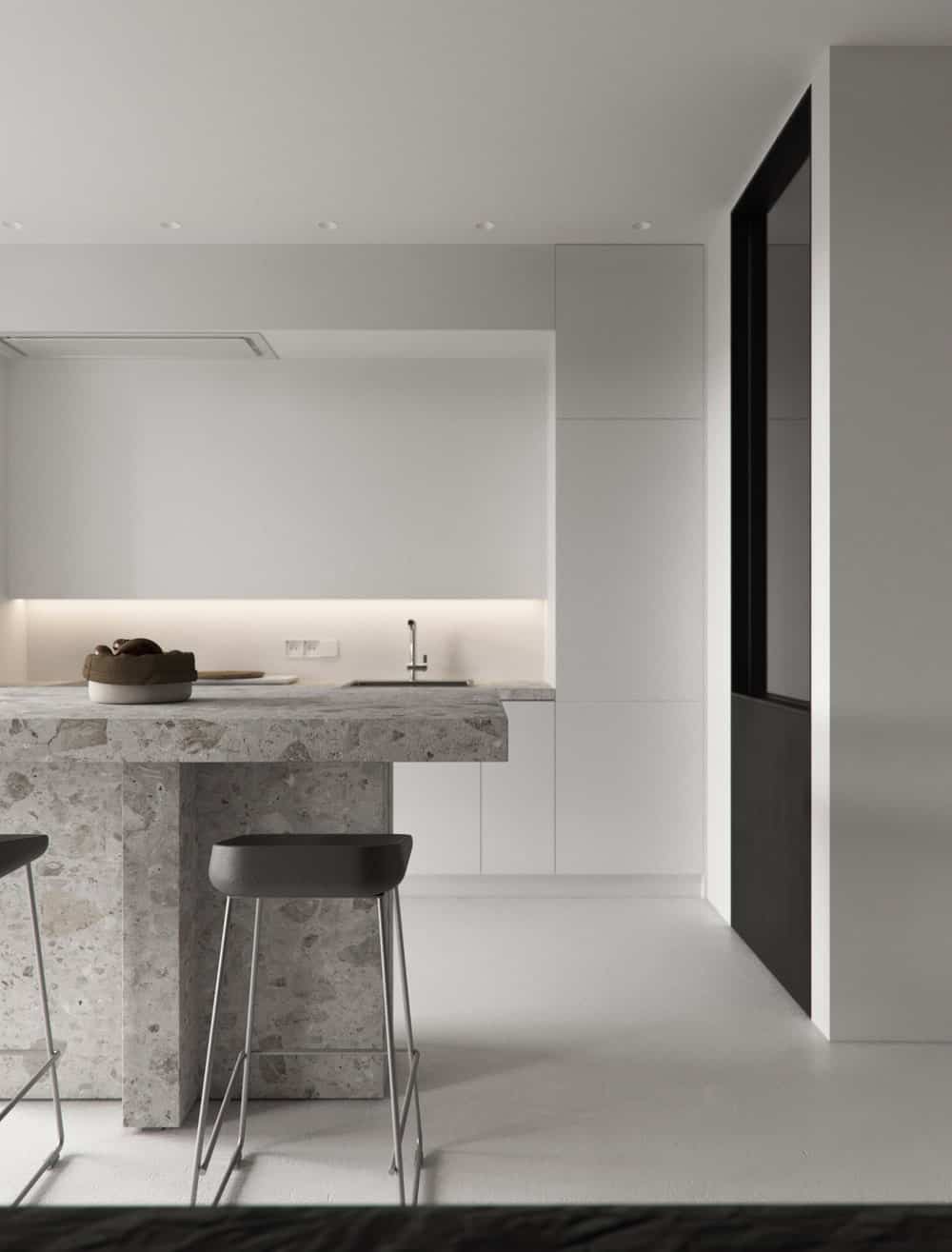 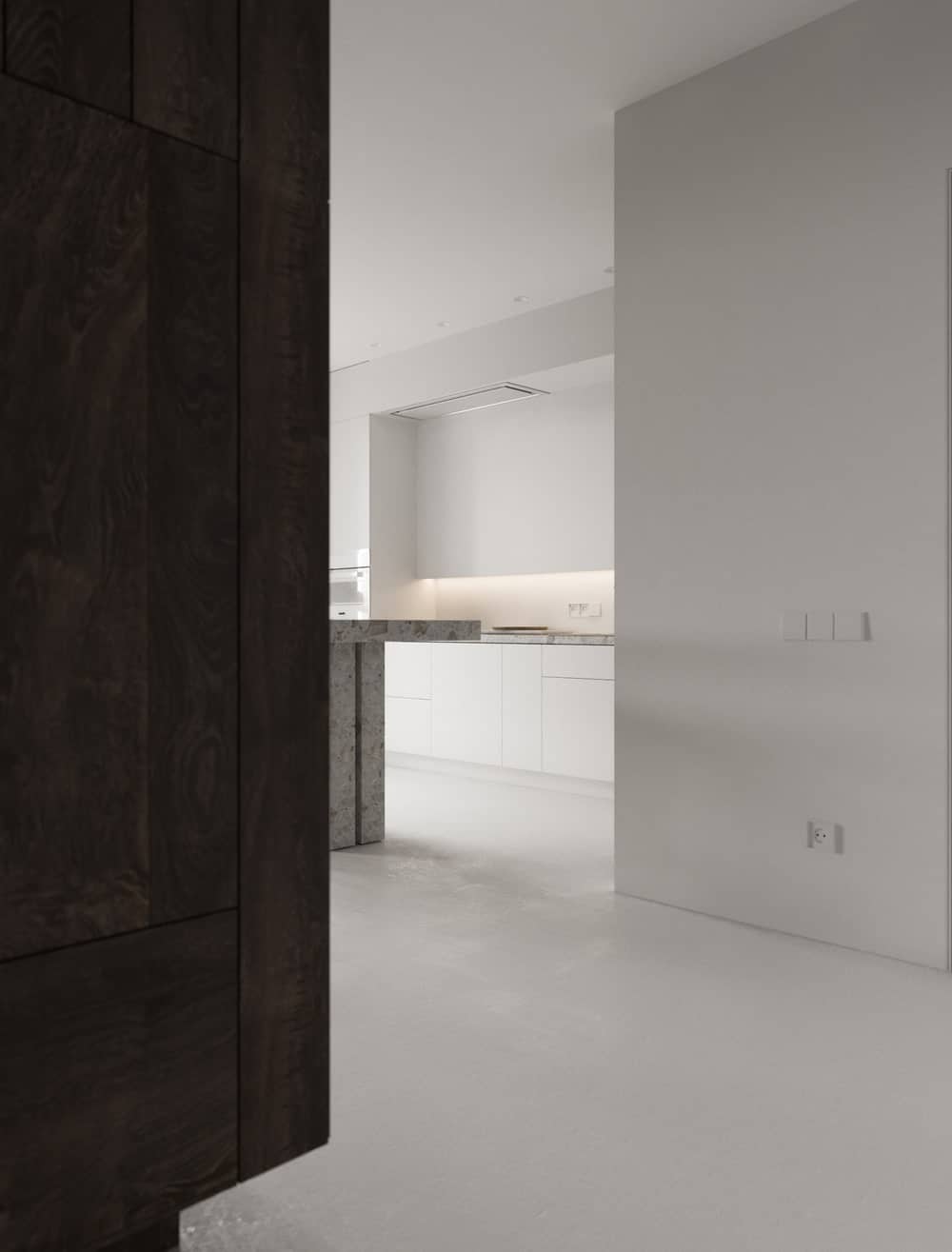 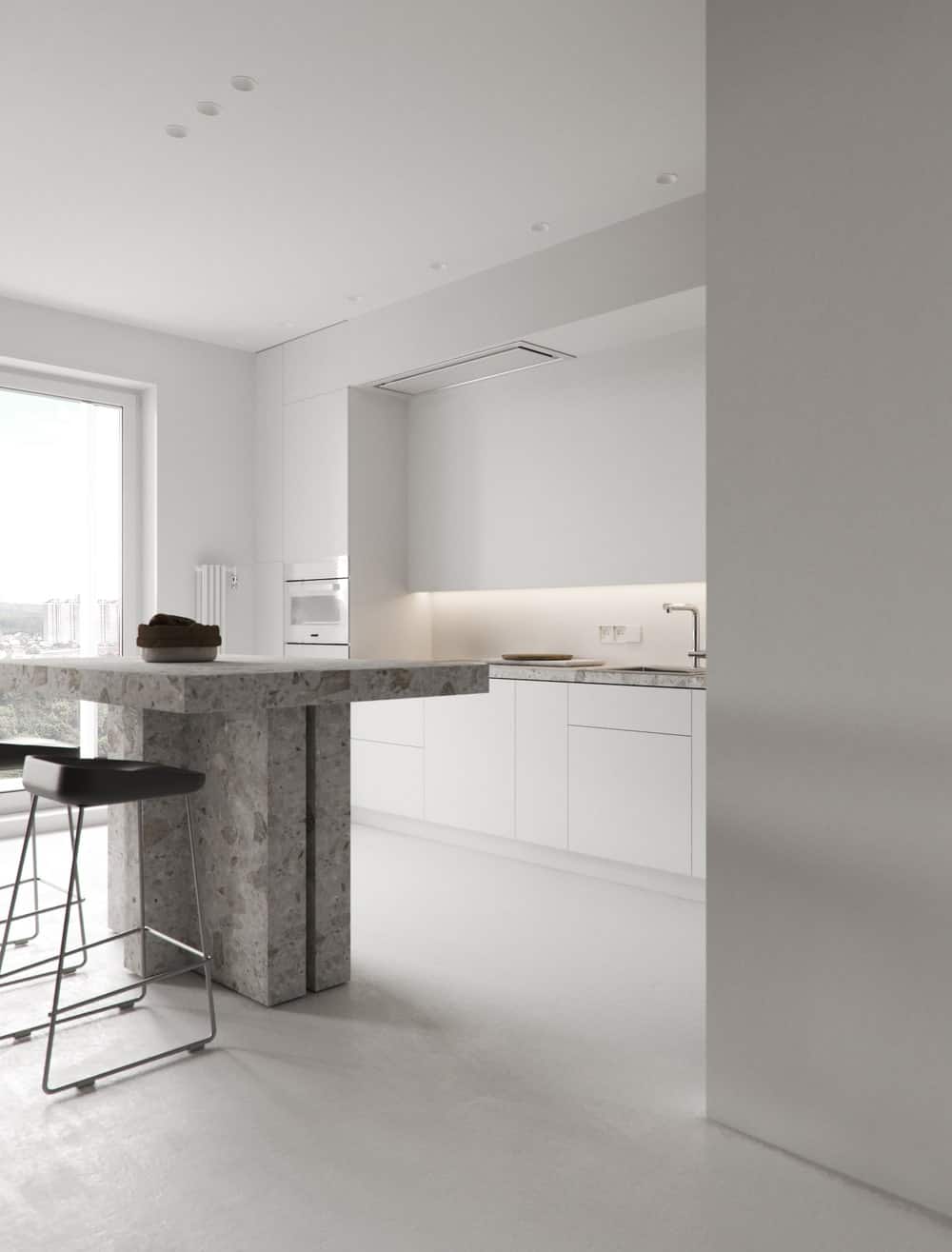 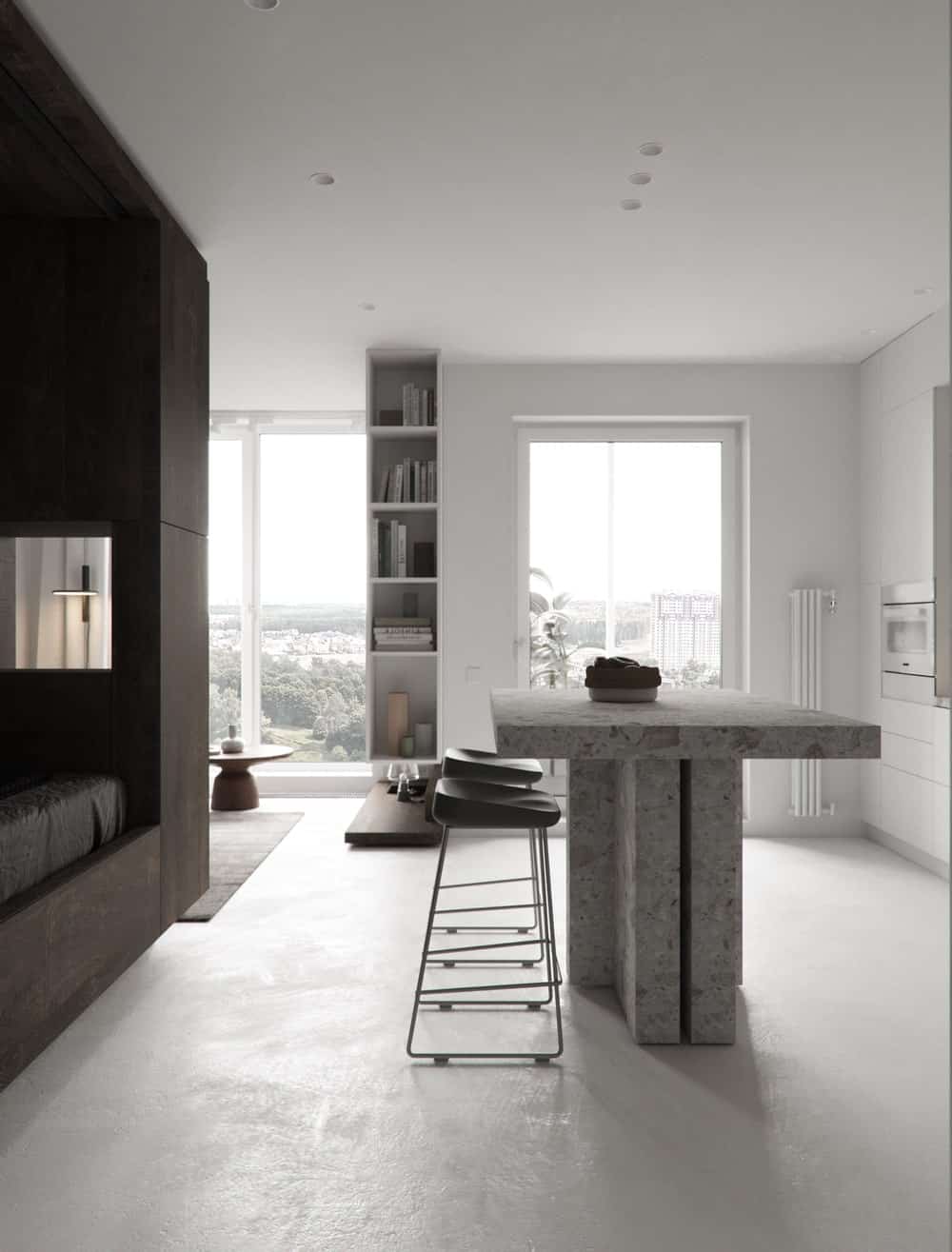 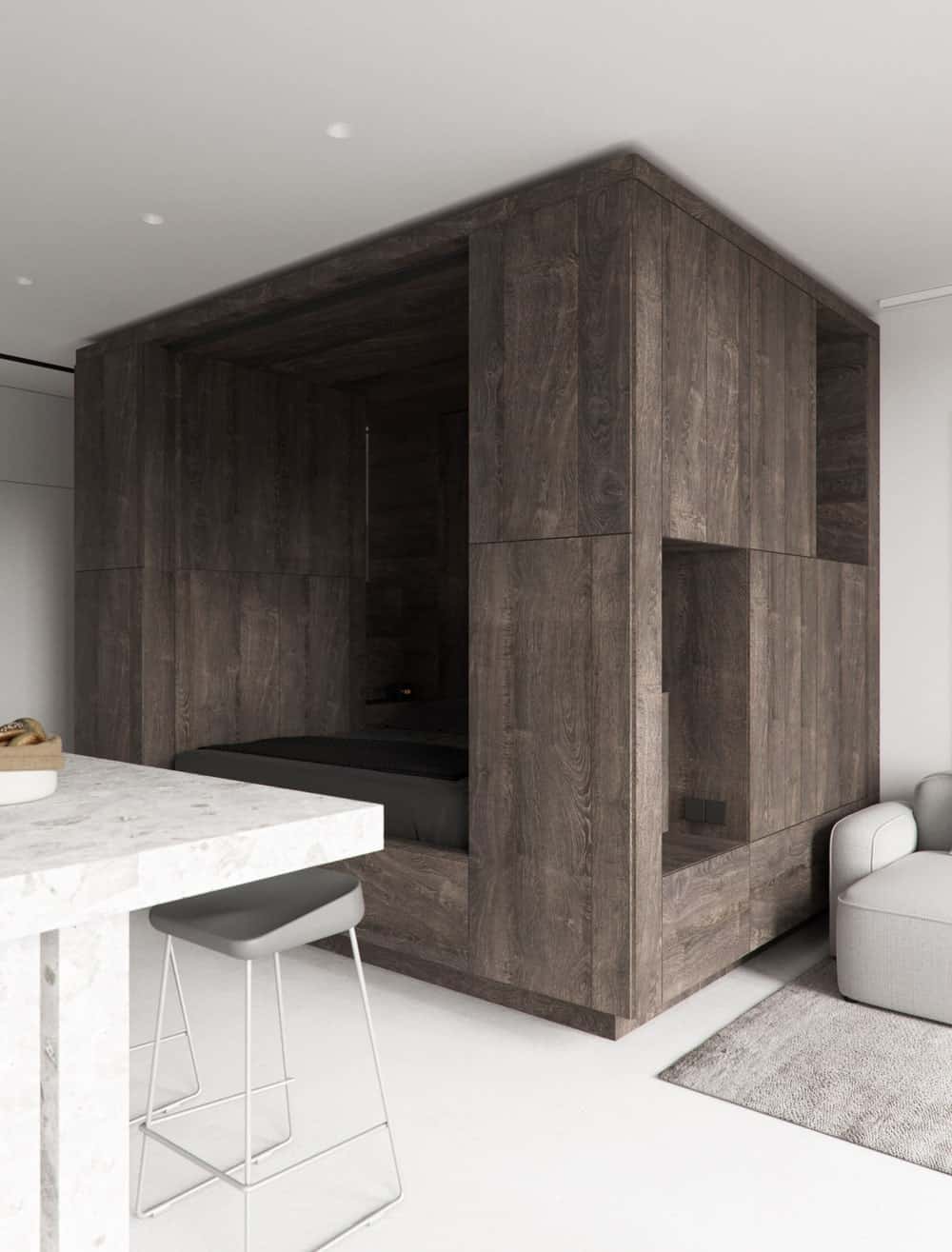 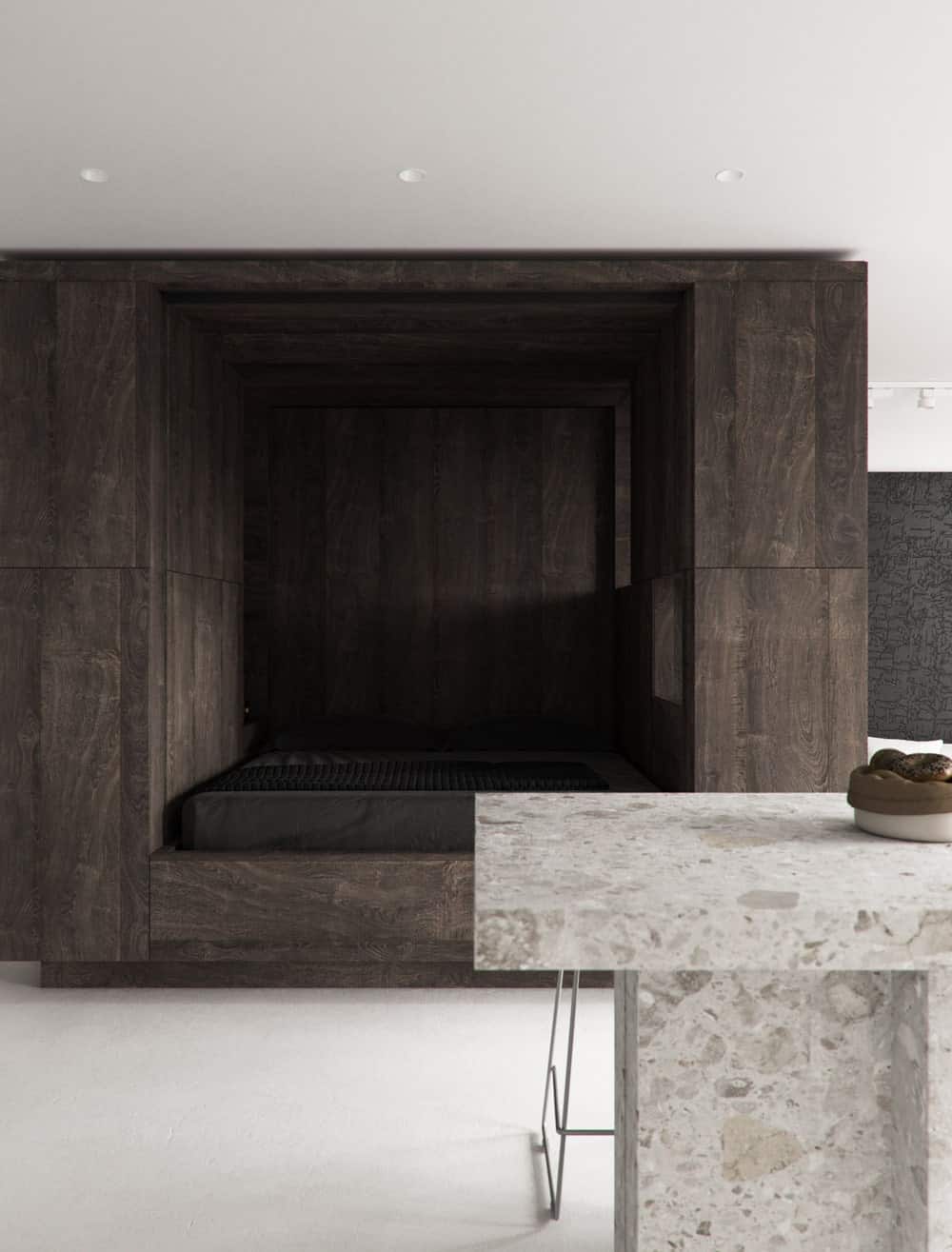 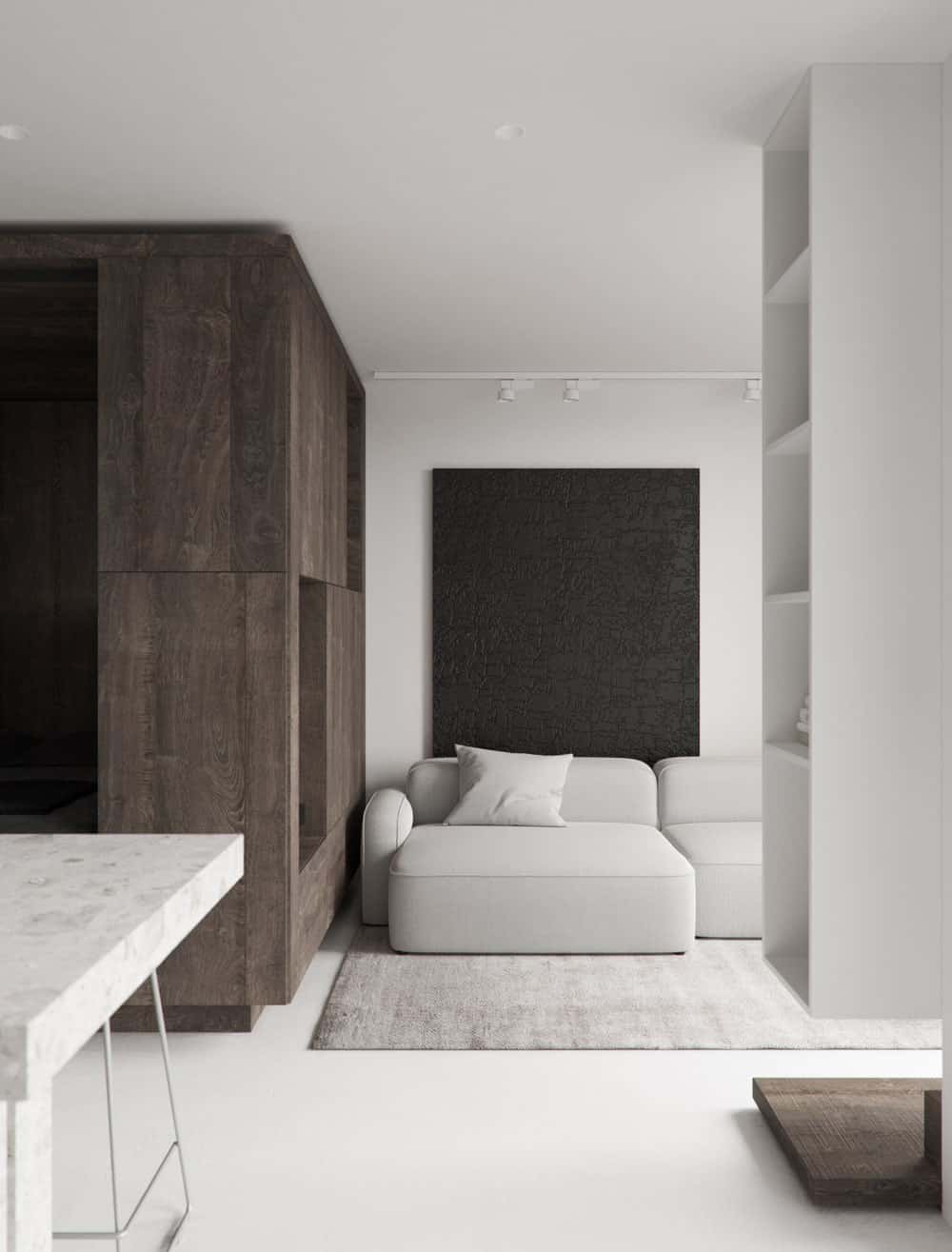 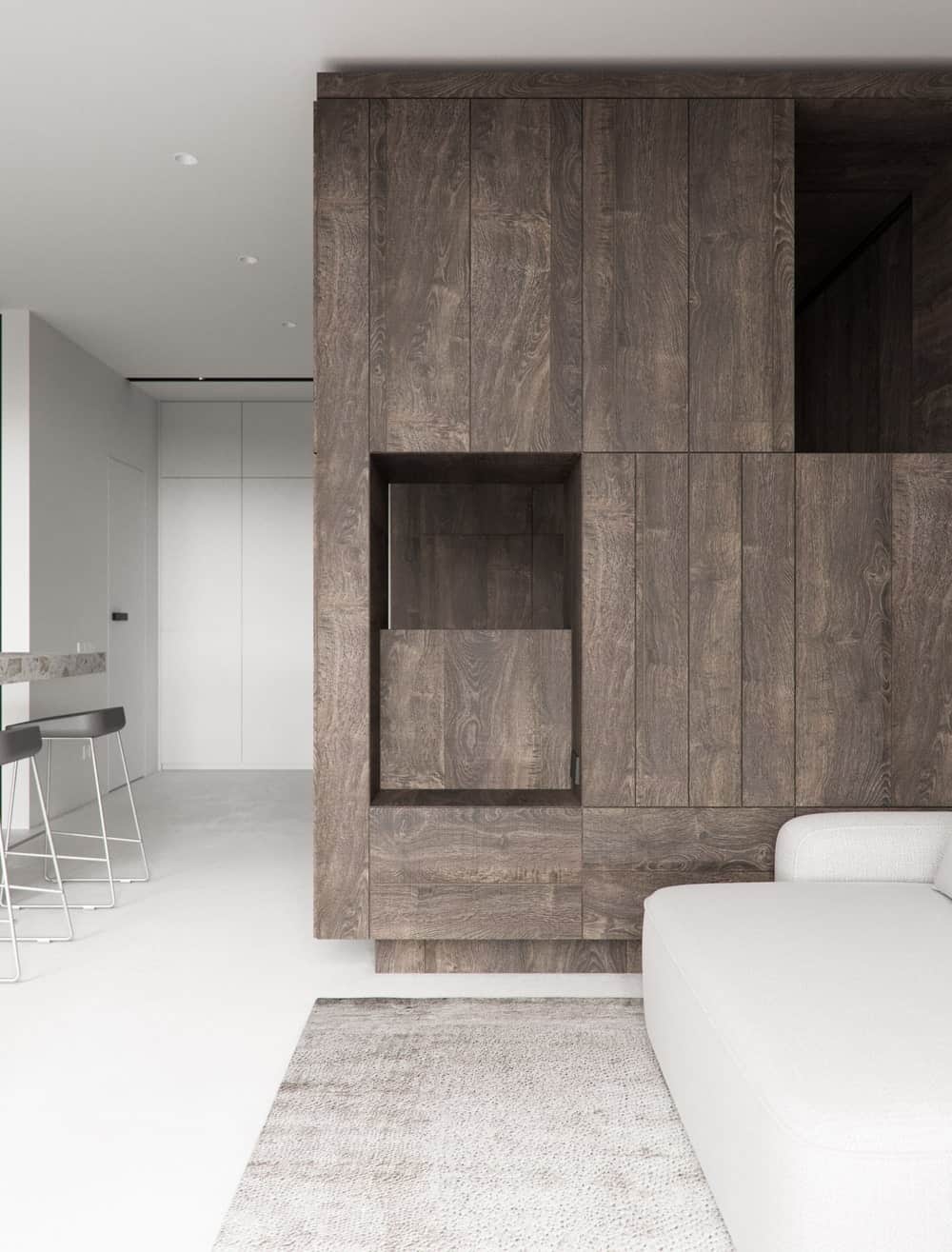 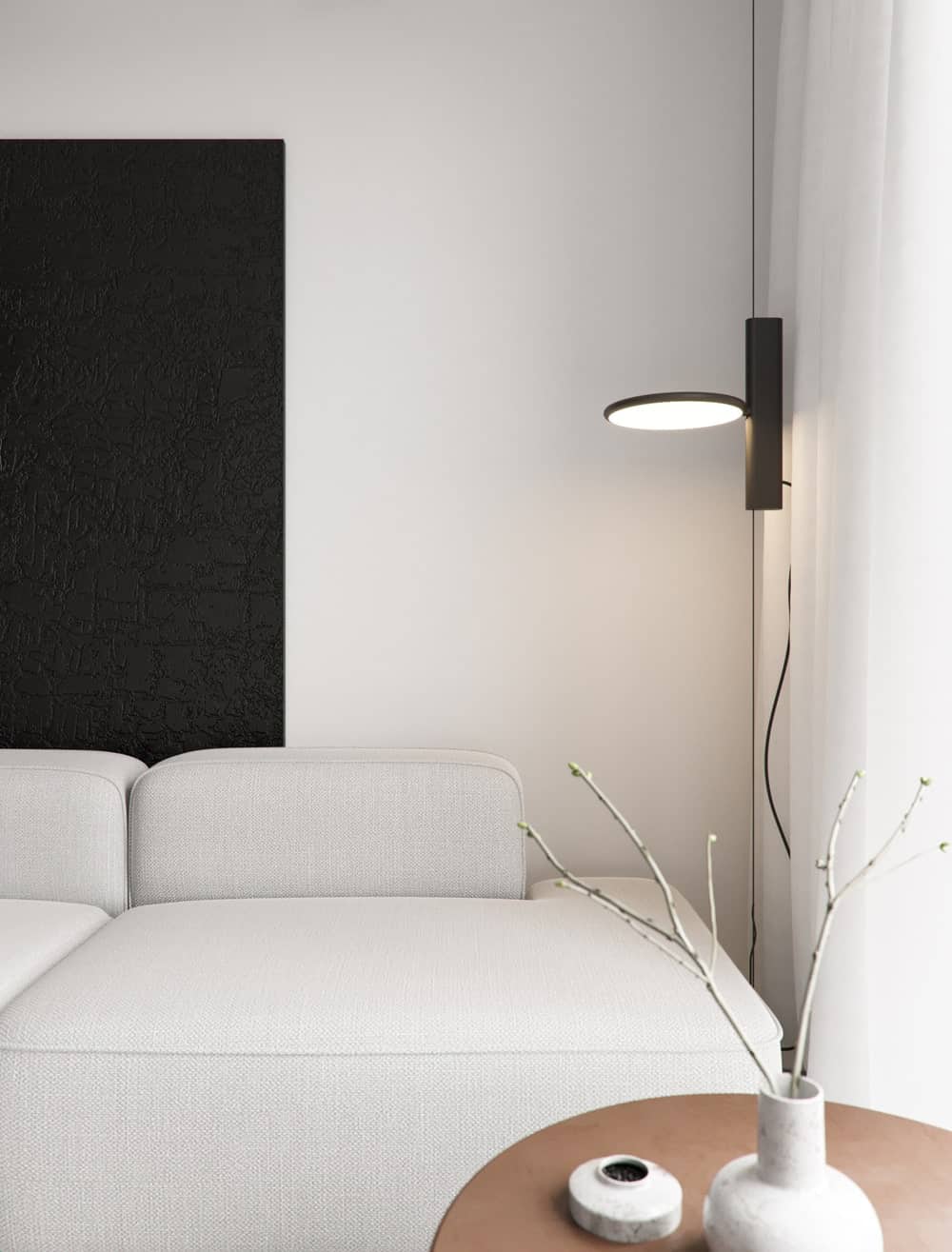 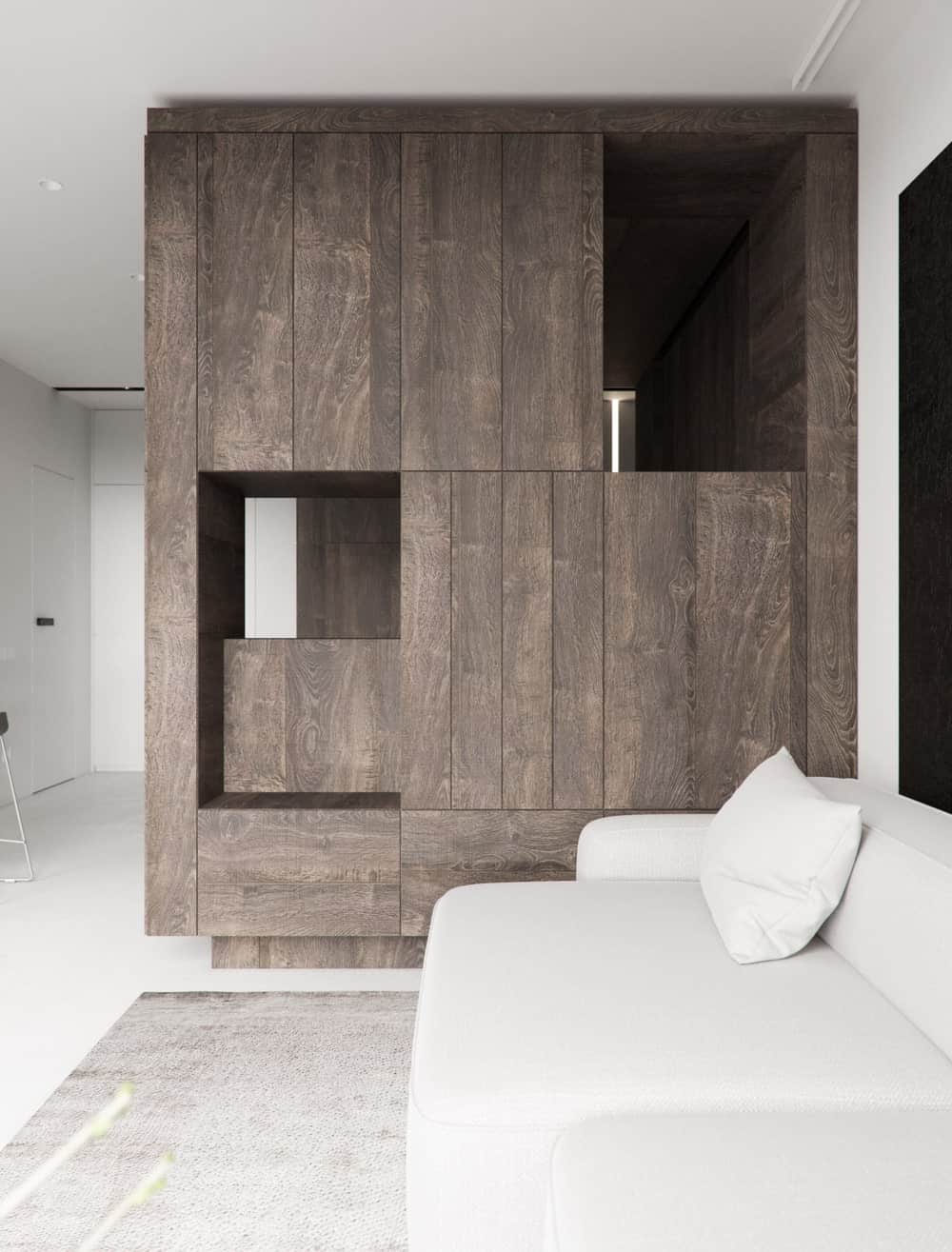 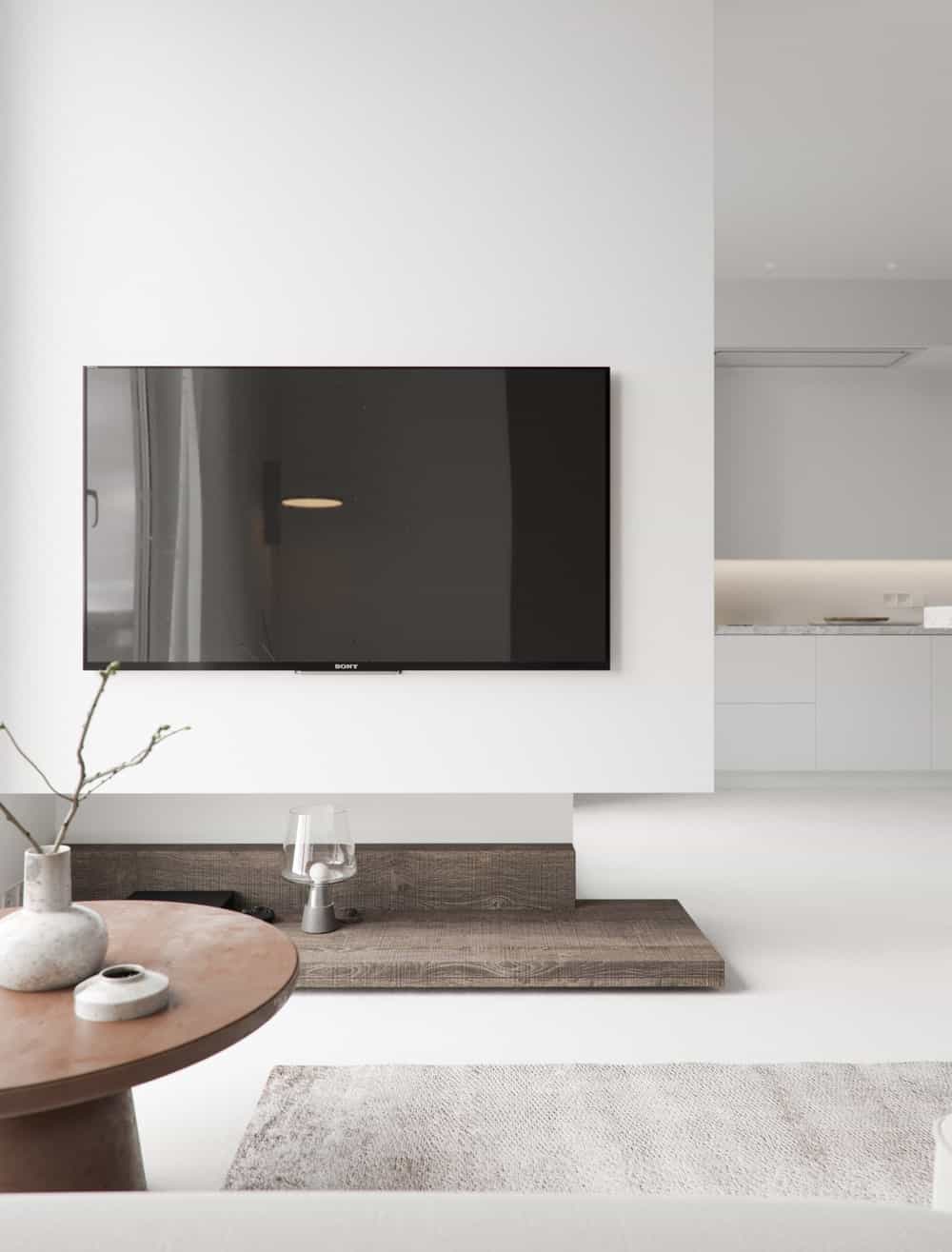 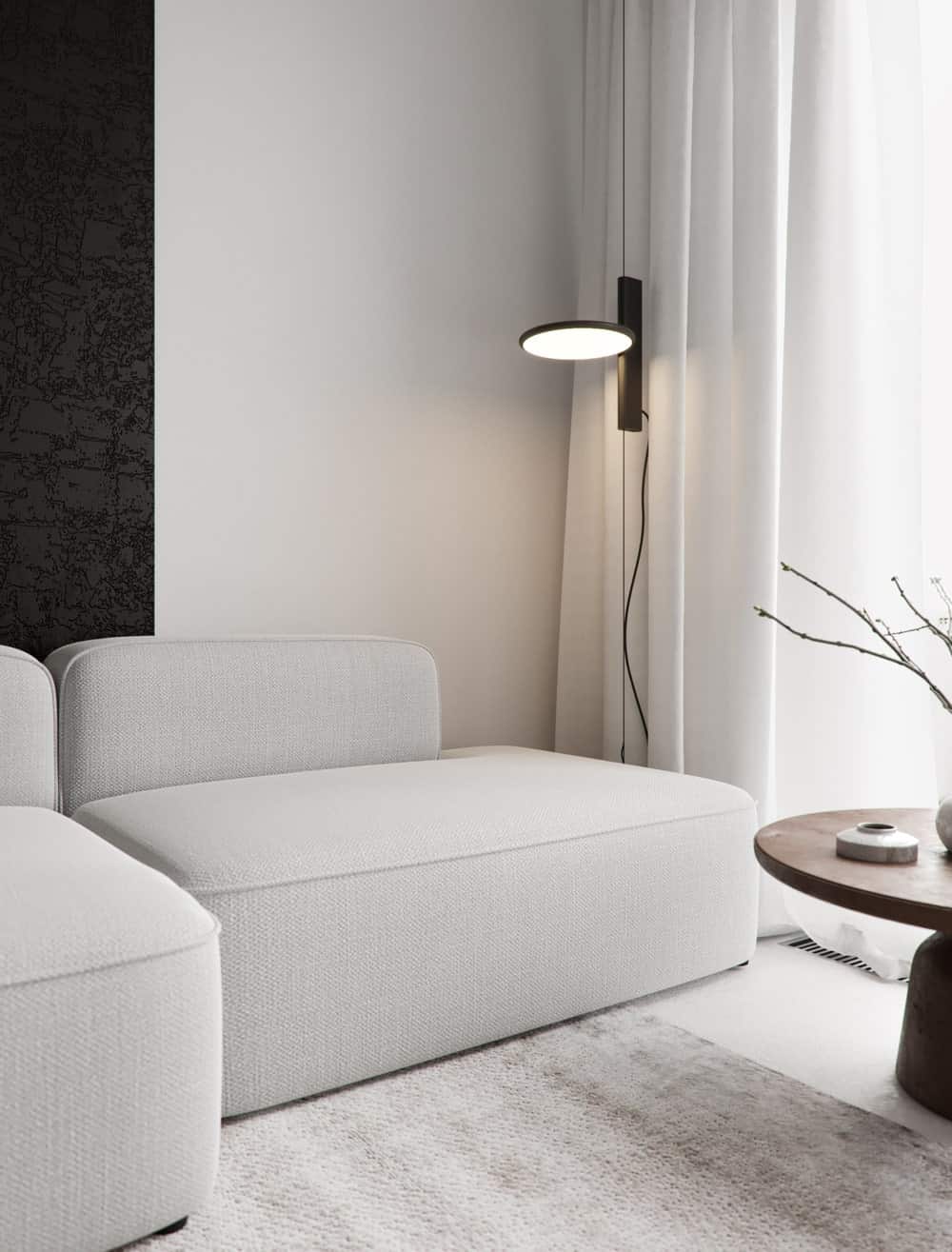 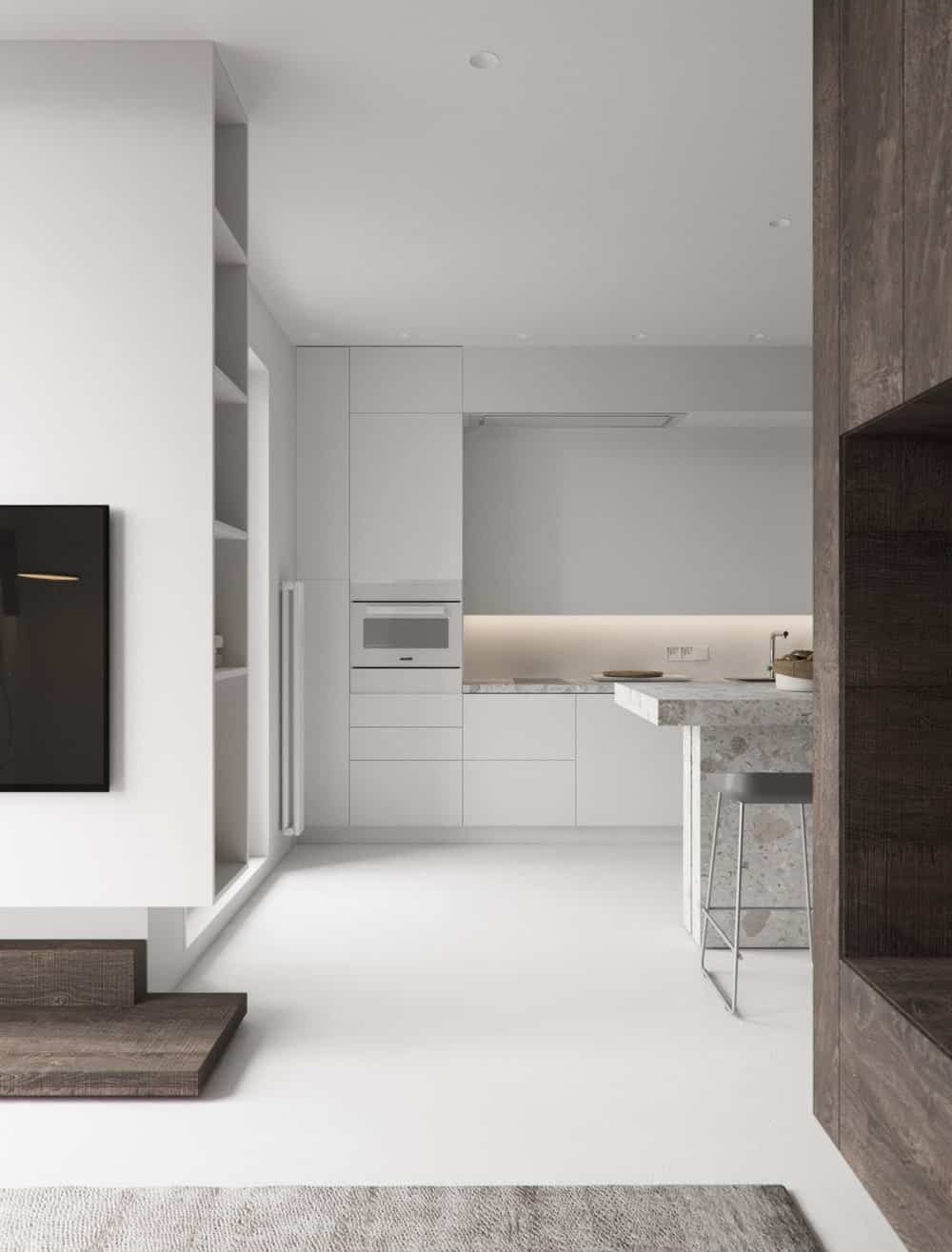 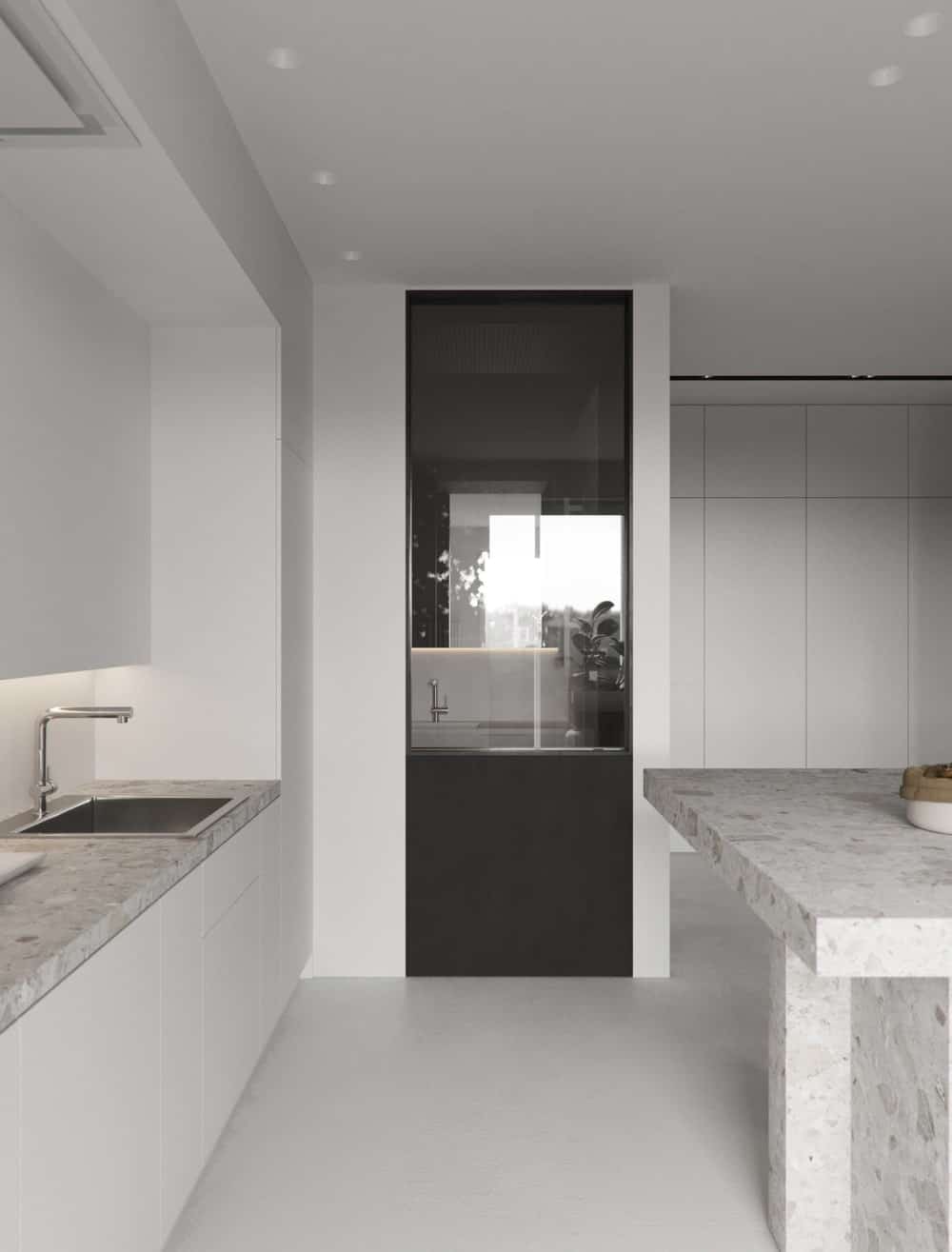 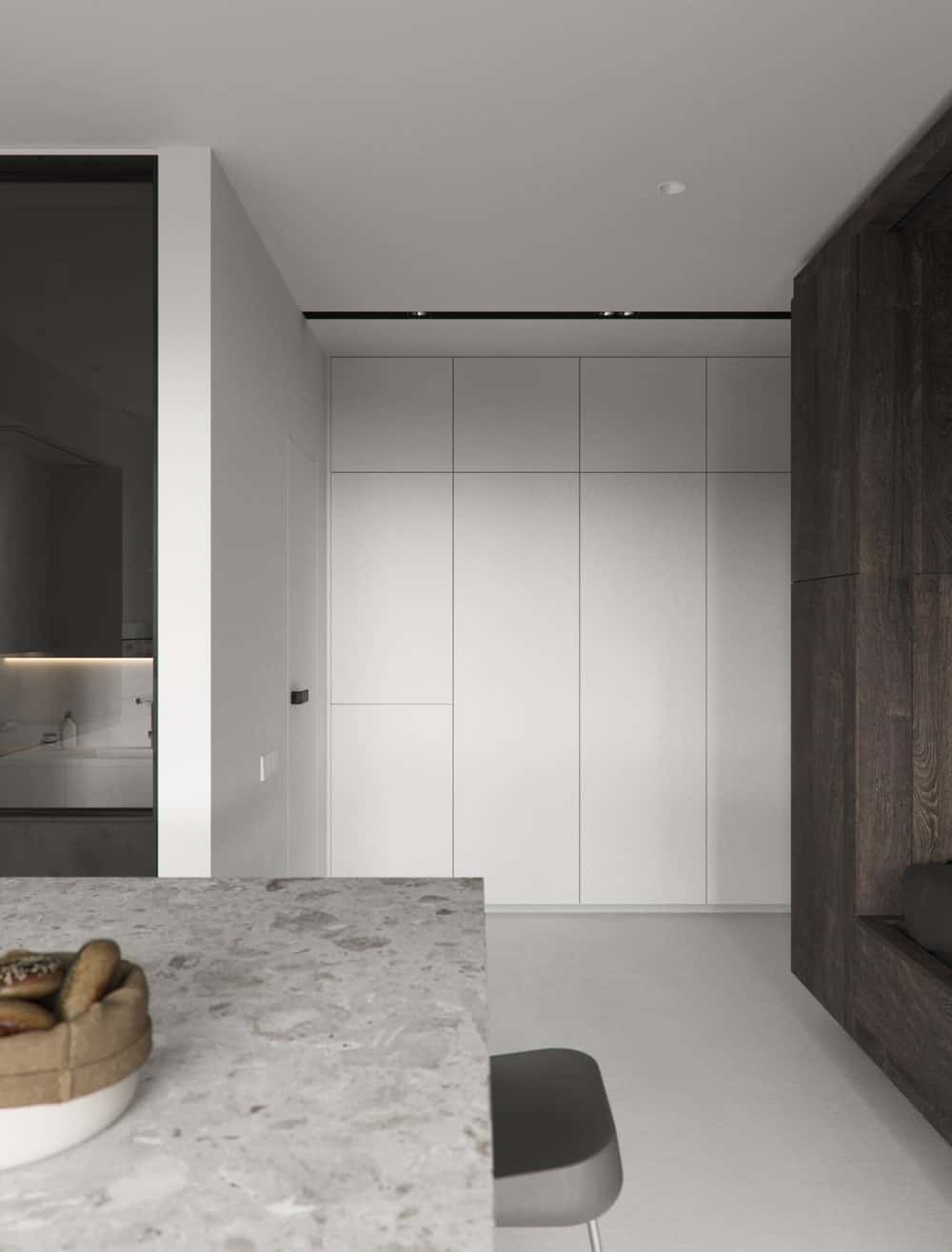 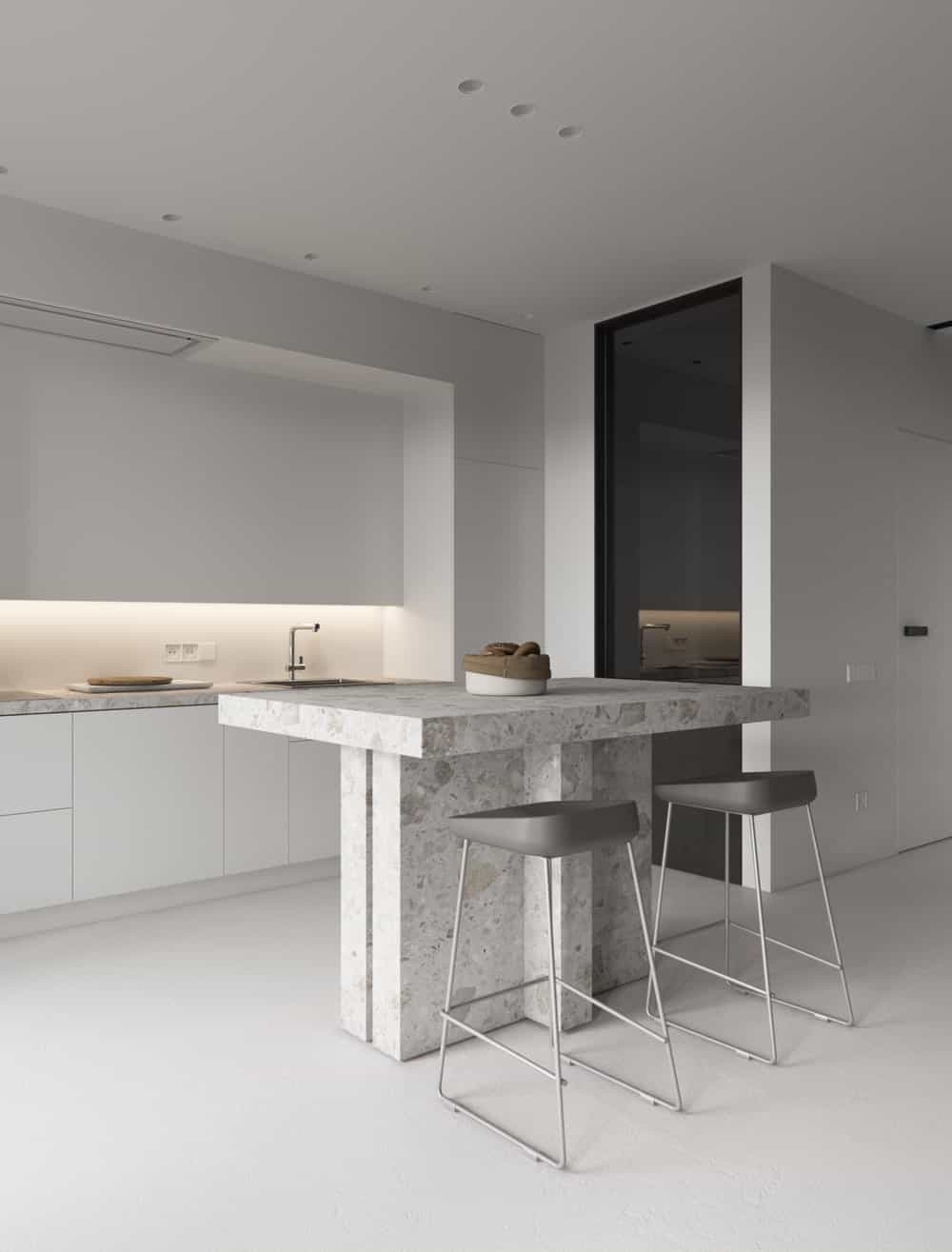 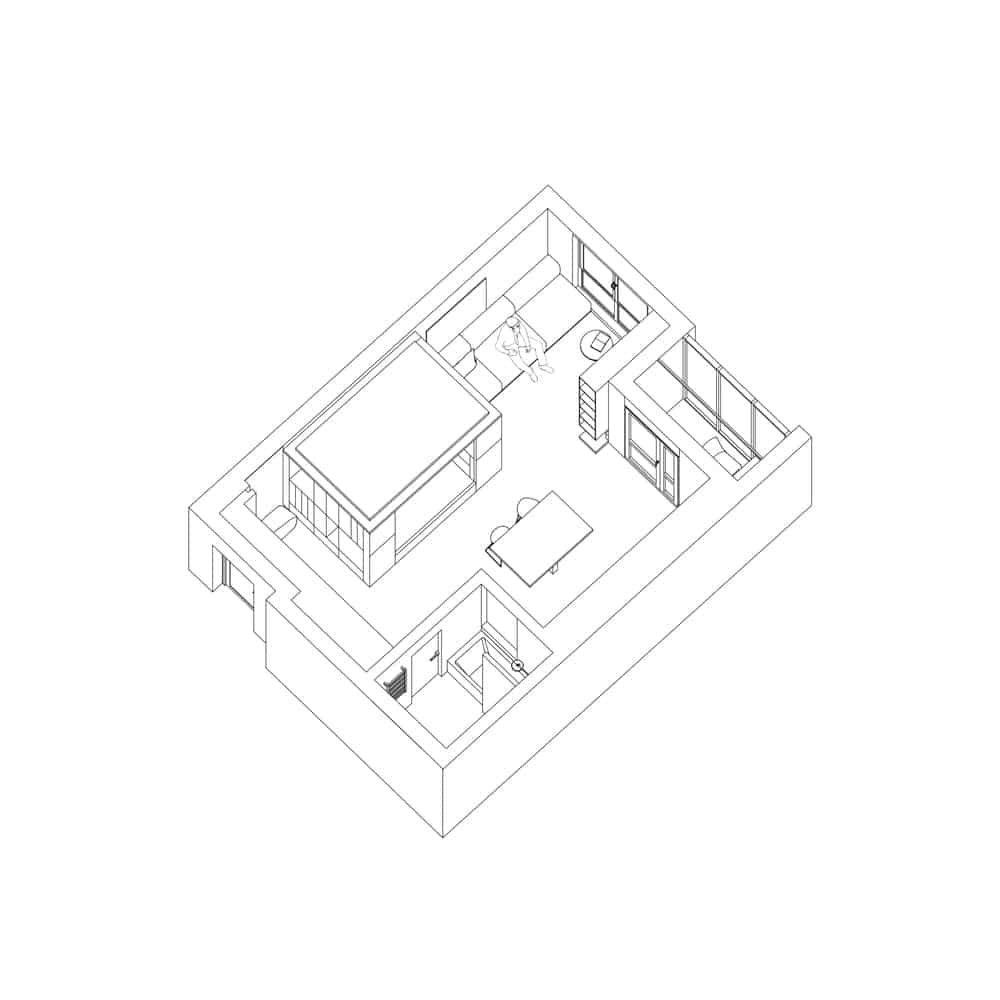 This is a small apartment for one person. Modest dimensions (41m2) and a set of functional zones, led us to create a “box” concept and became the first task with which we started the design process.

Functional zoning – we decided to divide the space of the apartment into three main zones: the living room zone, the kitchen area – the dining room, and the sleeping area. To create an isolated place for sleeping, but at the same time to preserve the free space of the apartment with its “air”, we decided to integrate the sleeping unit directly into the center of the room, without protecting it by stationary walls or partitions.

We have designed the “Box” like furniture, which serves as an isolated sleeping module, as well as the main place for storage in the apartment. With the help of the box, we visually separated the entrance area from the general space, as well as the living room area from the dining room and kitchen. In the end, we got interpenetrating spaces that visually contact, but do not mix with each other. Thus, the “box” solved a number of functional and planning problems and became the visual accent of the entire apartment space.

To further emphasize the new, “foreign” volume of the box, we decided to make the internal and external facades of the box in natural rough wood. The rest of the surfaces (floor, ceiling, walls, built-in-furniture) was made as laconic, smooth, and light.

This dialogue between the white, light background, and the accented volume of the “box”, creates a contrast dialog between colors, textures, and volumes, allowing to enhance the emotional perception of the interior and its basic materials.

In this project, as in many others, we paid special attention to the light, both natural and artificial. With the help of a well-thought-out lighting concept, it was possible to create a bright, airy, and visually permeable space, illuminated by natural light.

We also provided a lot of different scenarios of artificial lighting, which allows both to regulate the illumination of the premises, and easily create the right mood of the interior. Light and emotional perception are inextricably linked and our goal was with the help of light, to emphasize and supplement the restraint of the interior.

In a small space, the main resource is “air and volume” to achieve a sense of permeability and freedom, we cut the windows into a box and into the bathroom. These windows allowed us to distribute natural light into everything, even the darkest corners of the apartment. The windows allow illuminating the inner space of the box also the entrance area in the apartment.

We decided to follow the same principles for illumination in the bathroom. We cut through the portal between the kitchen and the bathroom, which allows us to illuminate the bathroom with natural light and create an additional visual dialogue between these spaces.

The window separating the kitchen and the bathroom is equipped with (smart glass) technology and allows, by pressing one button, to translate the transparent glass into a matte, opaque glass.