We already got quarantine purchases of actual chickens, so what about chicken dish towels as we shitpost well into the night months later? As the frenzied discussion about various chicken-themed household items and kitchen linens was met with many theories on Twitter, I decided to dive into some historical research and find some answers. 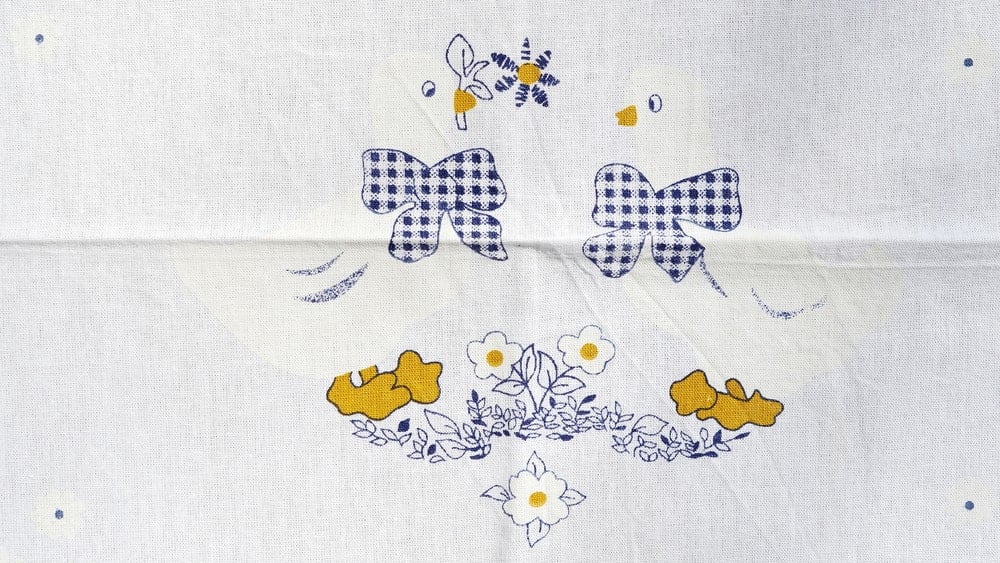 I was shitposting late in the lab one night (wait, no, I wasn’t, because it’s quarantine) when I saw yet another Twitter post that caught my eye. It was one of those things I realized I’d seen for years but didn’t really think about until someone pointed it out: namely, what’s up with all the chicken print dish towels? Why are so many kitchen items ensconced in chicken print, but especially linens?

Why are chickens a kitchen thing. All these chickens on these oven towels. You rarely see a hallway chicken. I have other questions that I will get to later, but for now it’s just this one

It’s just one of those things that didn’t strike me until I remembered how many chicken print things were in the kitchen growing up. I don’t have any myself–most of my dish towels are just random prints, a few frog ones given my love of amphibians, and the closest I got to chickens is a flamingo print towel that came with a matching oven mitt from Marshall’s.

But at some point in the mid-20th century, chicken-themed kitchen linens and tchotchkes were everywhere. There were these chicken paintings that came with the house I lived in, one in the entryway and another in the kitchen, and this completely batshit chicken in a dress. It sat on the dining rack next to the 16 cookie jars that housed a ragtag collection of hair ties and our Social Security cards (never cookies) and I don’t recall if it was my mom’s or the original owner’s, but it freaked me the hell out and I didn’t understand what would possess someone to place a chicken in one of those long 1930s farmhouse style dresses that even the Duggar family would find too conservative. So perhaps I’m unearthing some of my own repressed nightmares on this journey!

Well, we already got quarantine purchases of actual chickens, so what about chicken dish towels as we shitpost well into the night months later? As the frenzied discussion about various chicken-themed household items and kitchen linens was met with many theories on Twitter, I decided to dive into some historical research and find some answers. 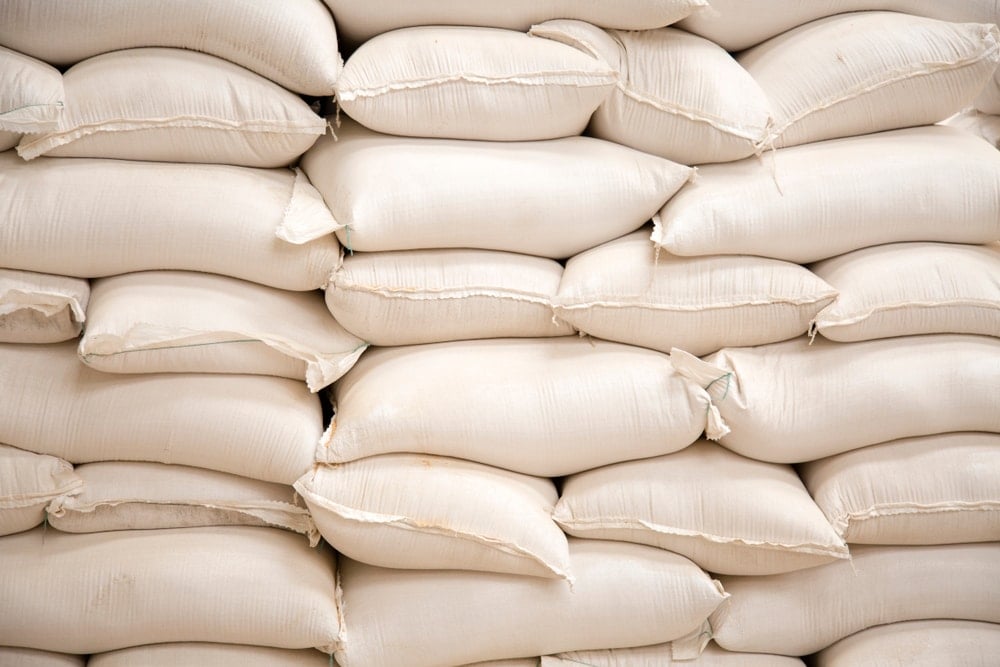 Before the chicken-shaped salt and pepper shakers and aforementioned completely batshit chicken in a dress doll, dish towels were unsurprisingly the chief progenitor of chicken-themed kitchen items. Namely because the sacks that were used to transport flour and chicken feed were incredibly durable, and perfect for repurposing into other household uses after the contents had been used.

Dish towels are believed to have been around in some fashion since the Middle Ages. While germ theory wasn’t around yet and hygiene practices weren’t the best as a result (think about our COVID containment efforts vs. the incalculable loss of life from the Black Death), people wanted to do their best to keep cooking and eating utensils clean. Because towels had a thicker pile than clothing and could be used to dry wet items faster, they evolved over the centuries to the point that “tea towels” became a thing in Victorian England. These towels were made of far less abrasive material that could dry tea services and fine china without scratching it, and provide a little traction for preventing tea-related spills and burns.

Around the same time though, flour, sugar, and other dry good manufacturers started changing the way that they shipped goods. Barrels were cumbersome and expensive, and these newfangled cotton sacks meant that more product could be shipped for less money.

Not only was this shift in packaging a win for the shipper, it was also a win for the customer because empty cloth sacks were easier to reuse than bulky wooden barrels (and with fewer painful splinters, to boot). Cloth sacks that once held flour, sugar, beans, chicken feed, and other dry goods began being repurposed into towels. People baked bread at home more routinely than nowadays, where it’s seen as a fun hobby that became a quarantine necessity. Before fancy Kitchenaids filled farmhouse and tiny apartment kitchens, families bought doomsday sized sacks of flour. Today, both wholesale and retail flour usually comes in paper sacks, or perhaps coated paper like Bob’s Red Mill or plastic bags if I’m getting fancy co-op flour. But for several decades, flour was sold in large cloth sacks that didn’t leave any lint behind. The material was incredibly durable and absorbent, which made the sacks ideal for both food prep (i.e. cheese-making and straining sauces) and reusing as dish towels. 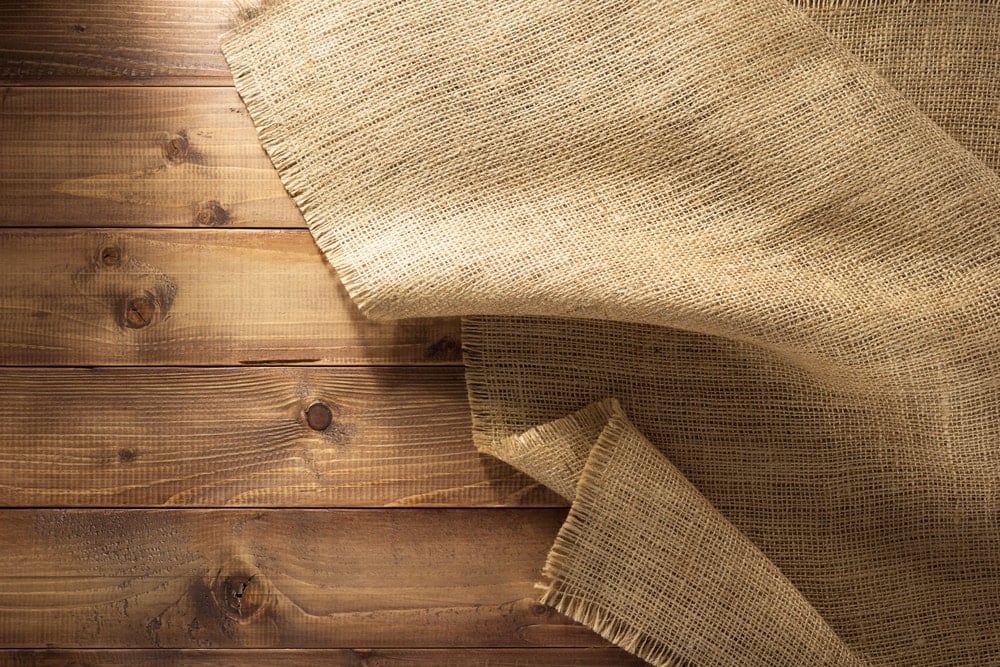 Sackcloth was an actual way to package dry goods before it was an aesthetic.

But while the packaging eventually shifted to paper and plastic, the capacity was roughly the same as modern flour sacks: 5-10 pounds. This meant that you had a huge collection of these sacks if you baked a lot and subsequently, the manufacturers decided to use this to their advantage by putting memorable slogans, mascots, patterns, and other imagery on them with hand-embroidered designs. Because they’d become so popular with homemakers of the 1920s who were hellbent on reusing every single thing, they even took this up a notch by retooling sackcloth patterns into designs that could be turned into dresses.

For women living on farms in particular during the Great Depression, they took extra care and pride into repurposing old flour sacks into other household linens aside from dishcloths. Quilts, bath towels, curtains, and even underwear were fashioned out of the former flour and feed bags. I’m sorry, let’s catapult back to 2020 for a second; I’m trying to imagine the embarrassing phone call that would ensue with a gynecologist trying to explain how you got a feed pellet lodged into your nether regions. And that just sounds itchy as hell. Anyway…

Because reusing sack cloth was even more ubiquitous on farms than it was in cities and the random patches of land that would become suburbs, sackcloth became known as “chicken linen” because sacks of chicken feed presented even more reuse opportunities than 5-pound flour sacks. Chicken linen became so popular that manufacturers realized that the very packaging would influence sales more than the actual product itself, so beautiful patterns and eye-catching images were a must for dry goods that were sold in sacks.

So how come even modern kitchens far removed from these rustic farmhouse roots feature chicken iconography here and there? 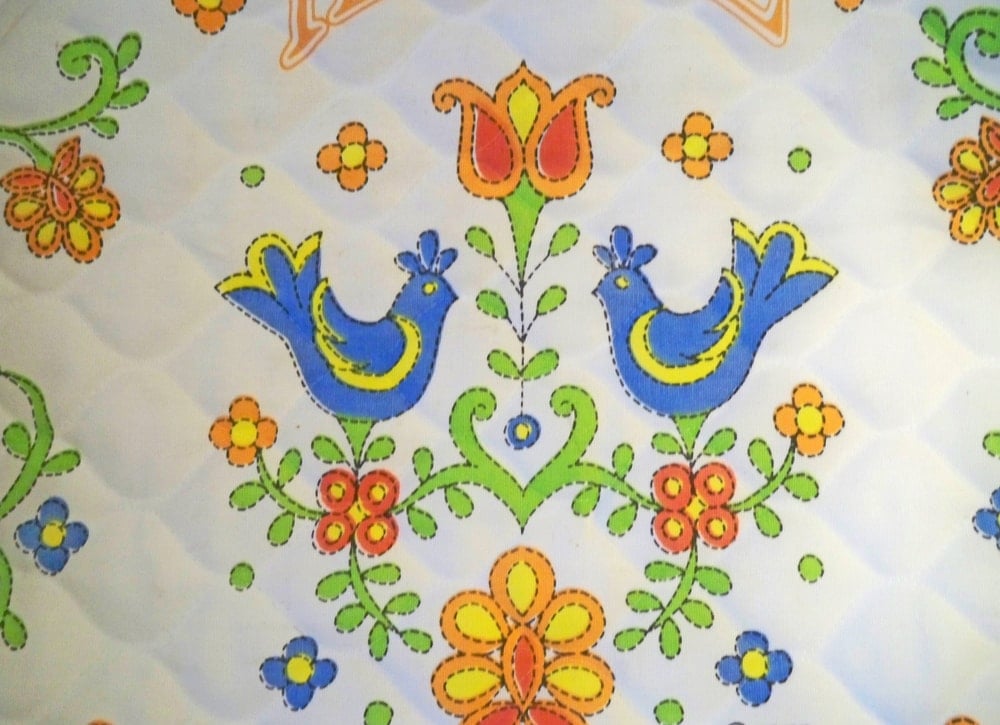 For a deeper dive into obscurity, the answer might lay within a hidden yet touristy enclave of America known as Pennsylvania Dutch Country.

I grew up taking frequent trips there and remember hex signs and the jokes about Intercourse, Pennsylvania, and sometimes I still make it to Shady Maple for my free birthday dinner if I’m visiting my family across the Susquehanna. The area is best-known for its Amish and Mennonite agrarian communities which are very religious and shun technology to some degree. The folk you see in all the tourism materials and riding horses and buggies on the same roads rife with outlet stores and antique shops run by Long Island expats? Are the “Plain” sect that live seemingly simple, Puritanical lives. Did you know that they also have a heathen counterpart known as the Urglaawe?

Sure, there’s the “Fancy Dutch” counterpart to the Plain who believed in bright colors in their art and dress, folk medicine, and Germanic polytheism. But Urglaawe is a heathen sect derived from Pennsylvania Dutch culture that also takes from Scandinavian cultures, folklore, and religious practices.

Of the various interpretations and religious practices of the Urglaawe, there is apparently some kind of vague history of venerating chickens. “Chicken dirt” is said to be holy with healing powers, and people would rub it on bruises while chanting. Chickens were also synonymous with home, the hearth, and health; and given that a lot of people see the kitchen as a central to one’s health and keeping the household running, it only makes sense that such a sacred animal would come to represent it.

While far lesser-known than the sacks of chicken feed that transformed into curtains and dresses in the Great Depression, it’s an interesting theory that holds up as Pennsylvania Dutch aesthetic was copied in other parts of the country after initial settlement.

Why Has the Chicken Persisted as a Kitchen Symbol? 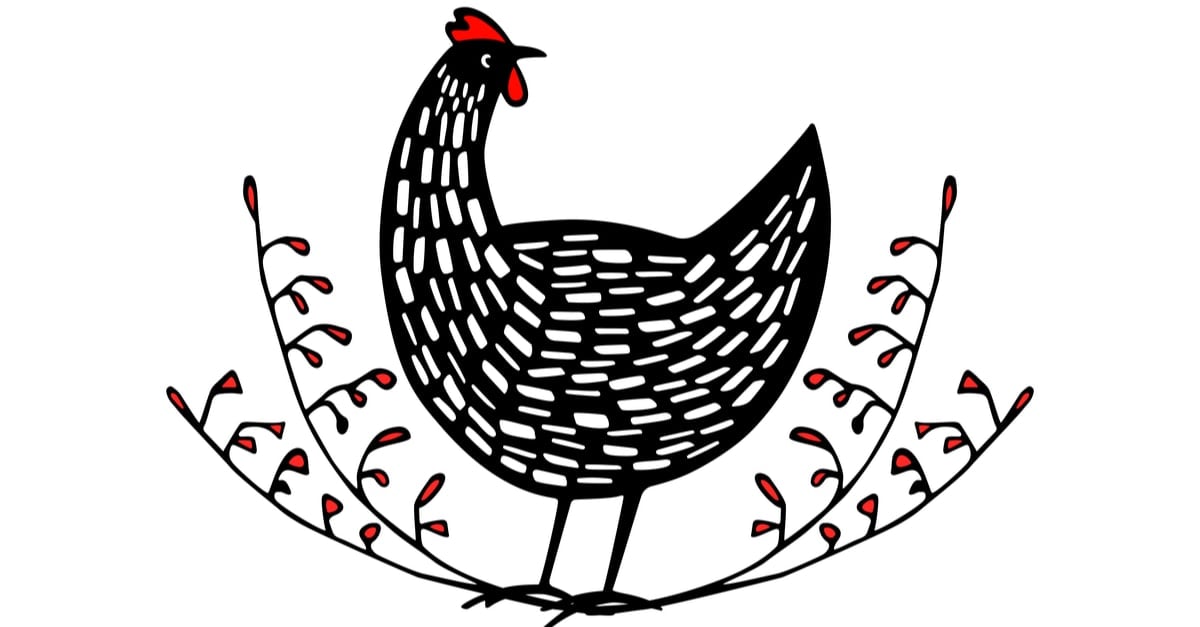 The trend of using sack cloth continued until the 1940s when the introduction of paper and plastic packaging began to phase out the cloth sacks, but the chicken-themed kitchens persisted. After all, chicken feed manufacturers would make sack designs that featured chicken-related imagery and this theme would bleed into other parts of the house once chicken-print curtains and dish towels had materialized.

So it just stuck ever since, and people added to the theme on their own to make it cohesive. It’s likely why that freaky as fuck chicken doll existed along with the chicken-print potholders and dish towels that came from a factory opposed to a repurposed feed sack.

There’s tons of options nowadays for home goods that may or may not be themed, but chicken theming is just deeply-rooted from those sack cloth towels and possible influence from an obscure Pennsylvania Dutch sect. After all, it was spying one sea-themed bathroom on vacation that led to a proliferation of this decorating style even when far from the beach cottages lining the coasts. People want to relax on the john and millions of Americans can’t afford to go on vacation, so having a beachy getaway in the toilet is the closest we can often get.

But while the sea-themed bathroom concept was seen once then wound up spreading, the chicken-themed kitchen goods are far more cohesive in rural areas where it was a major cultural force although they wound up as far as the suburbs of New York decades later. After all, people associate roosters with getting up in the morning even if you never set foot on a farm, and the kitchen is often the first room you’ll go to (if not the bathroom).

With the disposable nature of things today, it’ll be interesting to see if any artifacts from the 1990s-2020s will wind up theming kitchens of the future, that is if we’re not a bunch of 40-somethings sharing one gigantic dorm with a communal kitchen that a startup threw together at West Elm.