Need a sewing machine? Hold on! There are many different types, features and capabilities. Read our extensive list classifying your sewing machine options.

Although sewing machines are becoming a rare sight in homes, Gandhi, who eschewed all other technological advancements, called them “one of the few useful things ever invented.”

The sewing machine has been around for centuries and like many inventions, especially appliances, was not well-received at first. Nevertheless, it was successful in making a mark and is still the most important machinery in the textile industry.

History of the Sewing Machine

The English inventor Thomas Saint is credited with making the first sewing machine design in 1790. The sewing machine used the chain stitch method, in which the machine used a single thread to make simple stitches on the fabric. It was to be used on canvas and leather; however, Saint failed to properly market it. [Source: University of Houston]

Although many people built different versions of the sewing machine throughout the years, the first practical and most widely used one was invented by the French tailor, Barthelemy Thimonnier, in 1829. His machine utilized the same model as Saint and was patented on July 17, 1830. In that same year, he opened up the first machine-based clothing company to make uniforms for the French Army. However, the factory was burned down by rioting tailors who feared they would lose their livelihood in wake of the patent.

Then in 1844, English inventor John Fisher combined all the elements of the previous sewing machine to create modern innovation. Unfortunately for him, due to botched patent filings, he did not receive the credit for the modern sewing machine and instead Isaac Merritt Singer got the credit for it when he created and patented the most commercially viable sewing machine in 1951 and eventually created the industrial giant, the Singer Company.

Since then, sewing machines have taken the world by storm and changed people’s lives. 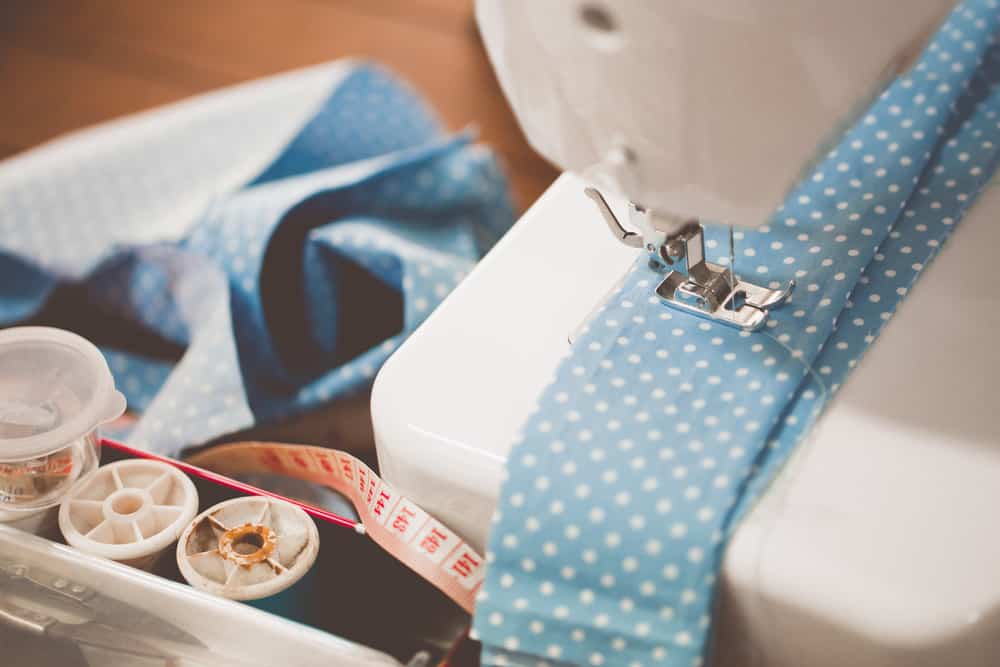 Unlike their industrial counterparts, domestic or household sewing machines are generally made of lighter material like plastic polymers and nylon. These machines are not as quick as industrial sewing machines, but they have a lot of features in a single machine. Since they are not made for hard use, the motors in these devices heat up after rigorous use.

Manual sewing machines are run by pedaling and therefore, no electricity or battery is required to run them. They have simple functions and basic features and hence are quite cost-effective. However, they are quite slow as compared to electronic or computerized sewing machines.

These machines have a single motor that runs on electricity. A worker can derive power from the motor by pressing on the foot pedal. A designated dial allows you to select the length and type of stitches. It also comes with several other features. 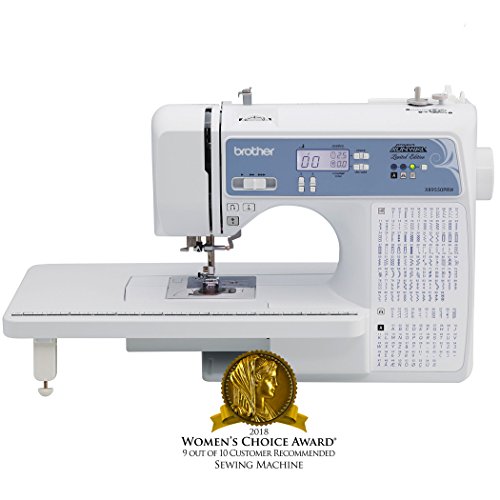 They are the most advanced sewing machines and come with valuable features that have revolutionized the sewing experience. They do not have any buttons or dials but are equipped with LED touch screens that help you select the required features. They also come with a Wi-Fi and USB feature so that you can download designs or extra features online. These machines are extremely precise and do not make any mistake in stitch length. 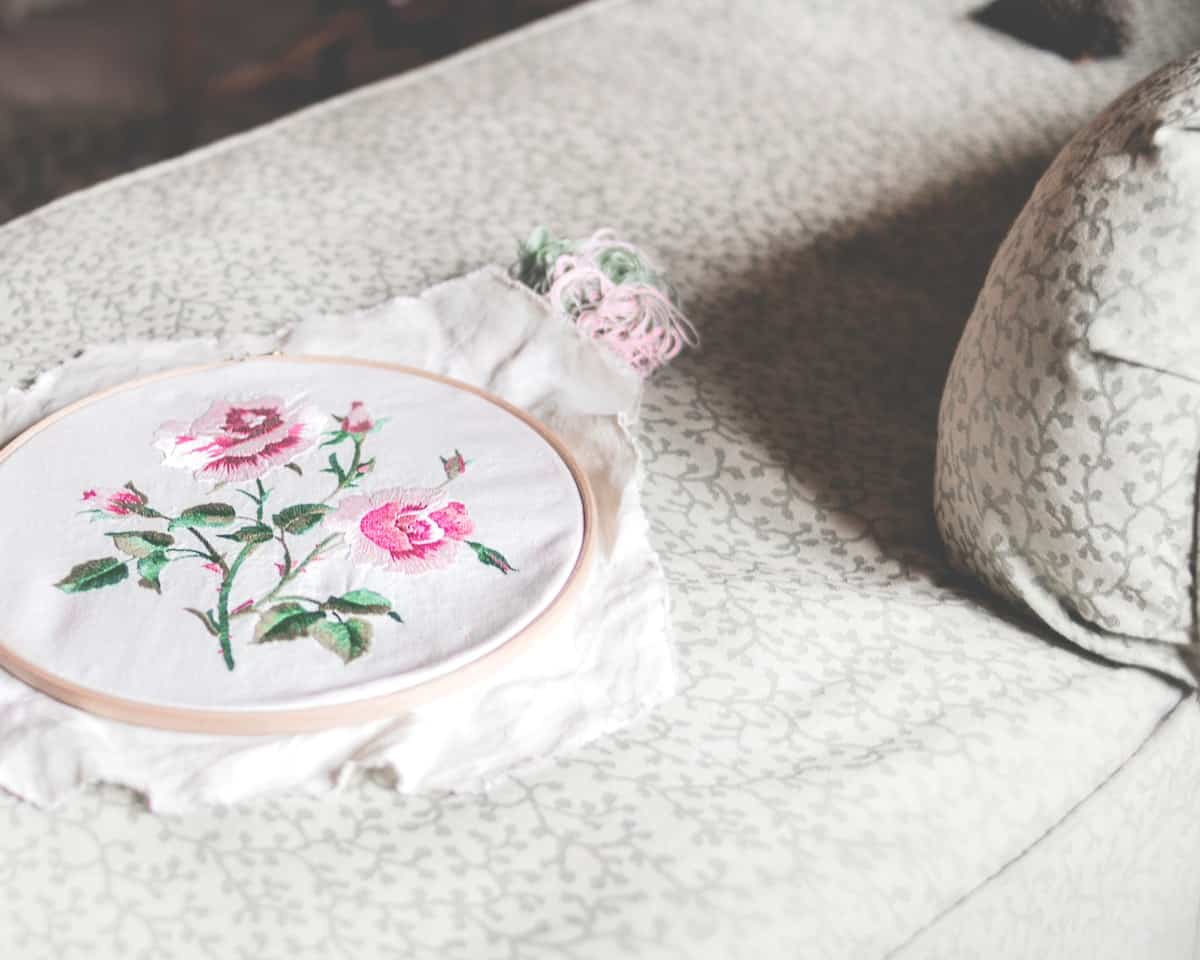 Apart from the above-mentioned sewing machines, there are several other machines that come with versatile features.

These machines make fine embroidery and are often fully computerized. These sewing machines are very quick and are valued because of their time-saving abilities, although hand-embroidered work is more favored.

People have been using the zigzag function in sewing machines to create embroidery; however, with these dedicated computerized embroidery machines, the former method is now used less frequently.

Embroidery sewing machines come in three types: ones with limited options, ones that give you leeway to make your own embroidery, and ones that allow you to download new designs.

Also known as “Sergers,” these machines are designed to create overlocked stitches on hems and seams to create tight and neat edges. These machines also have a cutter, which cuts the edge while creating a seam. Overlock sewing machines are extremely fast.

A machine that lets workers use two bobbins and two needles are called double needle or twin needle sewing machines. These machines sew in a parallel line of lock stitch and are used to make decorative stitching.

Bar tacking refers to a series of stitches to reinforce fabric that may be subject to wear and tear. Bar tacking provides durability and strength to the material and hence is used in joining belt loops, ends of blankets and zippers, and sewing the corners of the pockets.

Lock stitch is the most common and basic stitch found in every sewing machine. Lock stitch machines lock together two threads before they pass through the hole into the fabric. A lockstitch is found in the center of the thickness in the fabric.

With so many varieties of sewing machines in the market, it is not always an easy task to decide which one to buy. If you are a beginner, you need to buy a sewing machine that is easy to use and does not have too many complicated features. Hence, an electronic sewing machine is a good choice. It should be made of strong material so that it lasts for a long time. Moreover, it should be compact so that it doesn’t take up too much space. If you are an experienced seamstress and have the money to do so, you can go for a computerized sewing machine.

Regardless of what sewing machine you buy, make sure it offers you ergonomic comfort, ease in sewing, and is time-effective. 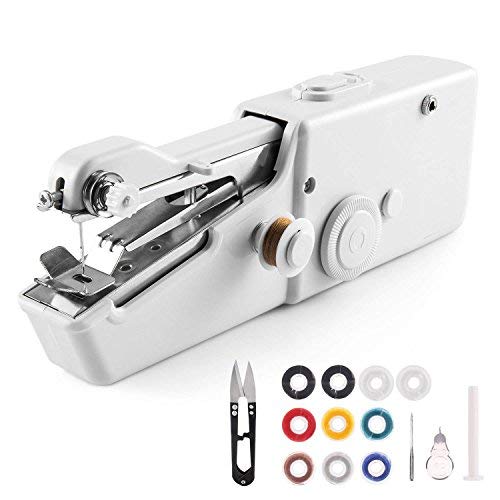 Above is a portable battery-powered mini-sewing machine with excellent reviews. If you travel and frequently need to sew something, this is a terrific little unit to get. 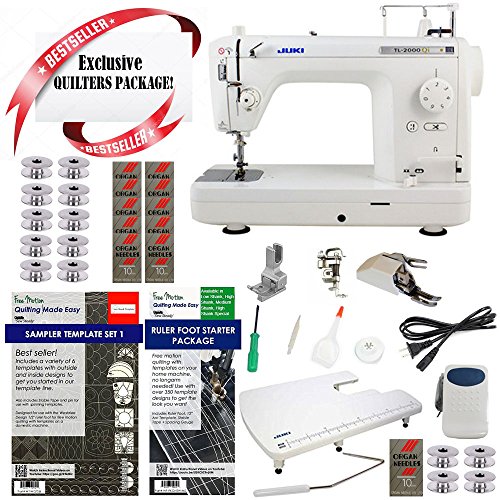 If you also quilt, you might want a machine that both sews and quilts instead of getting two machines.

Industrial sewing machines have the capacity to be used on the toughest of fabrics without experiencing wear and tear. As such, they are more powerful, tough, and durable. Moreover, major components like connecting rods, gears, housing, and body are all made of a strong material like aluminum and iron. 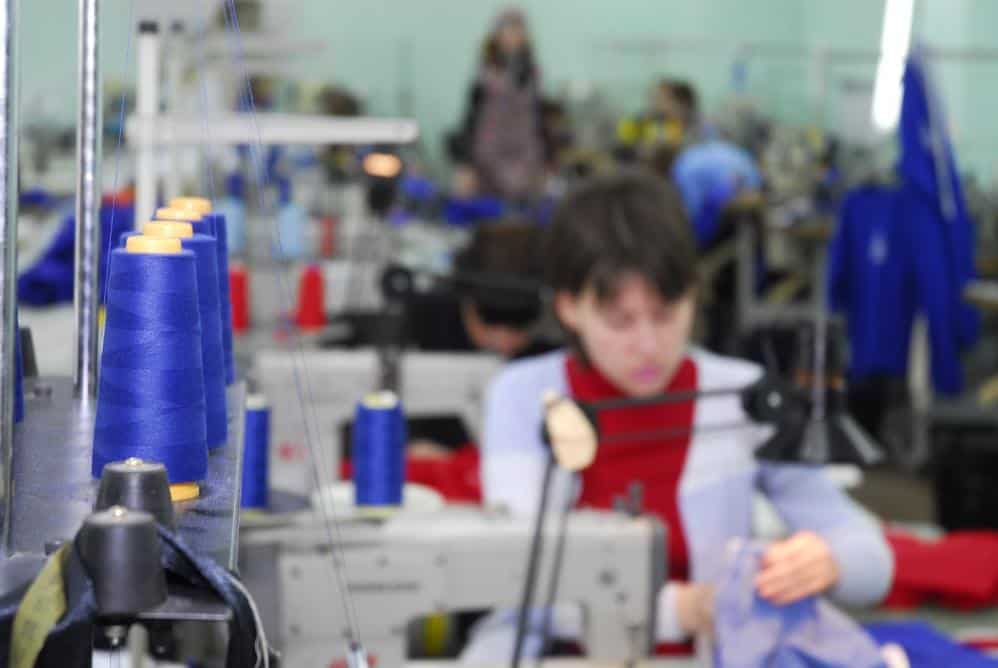 Here are some types of industrial sewing machines:

These machines consist of an extended needle arm, very much like the ones used in domestic settings. They are used in factories to sew together flat pieces of fabric and other simple projects.

Post-bed machines are fitted on a sewing table with an external motor. These devices consist of feed dogs, bobbins, and loopers in a raised vertical column above the flat base of the machine. The column may range from 10 cm to 45 cm in height. This type of machine is used to attach emblems and stitch boots, purses, hats, bags and gloves.

Unlike the flat-bed sewing machine, these devices consist of a horizontal cylindrical column instead of a flat base. The cylinder may be 5 to 16 cm wide and is used to sew cylindrical pieces like sleeves and cuffs as well as bulky items like shoes and saddles.

Free arm sewing machines come with a detachable flat-bed arm, which can give way to a free arm. A free arm is a much narrow working surface than a flat-bed and has space beneath it so that it doesn’t touch the sewing table on which the machine rests. You can use it to make sleeve or pant hems by inserting fabric around the arm, which will give you the edge and space to sew circular projects.

In this machine, two or three needles and loopers may be used and sewing may be done from four threads. The feed-off-the-arm machine produces two to three rows of parallel chainlock stitching rows. This machine is used for sewing light-weight to heavy-weight material like jeans, inside of knit shirts and T-shirts. [Source: FriedlanderSewing.com] 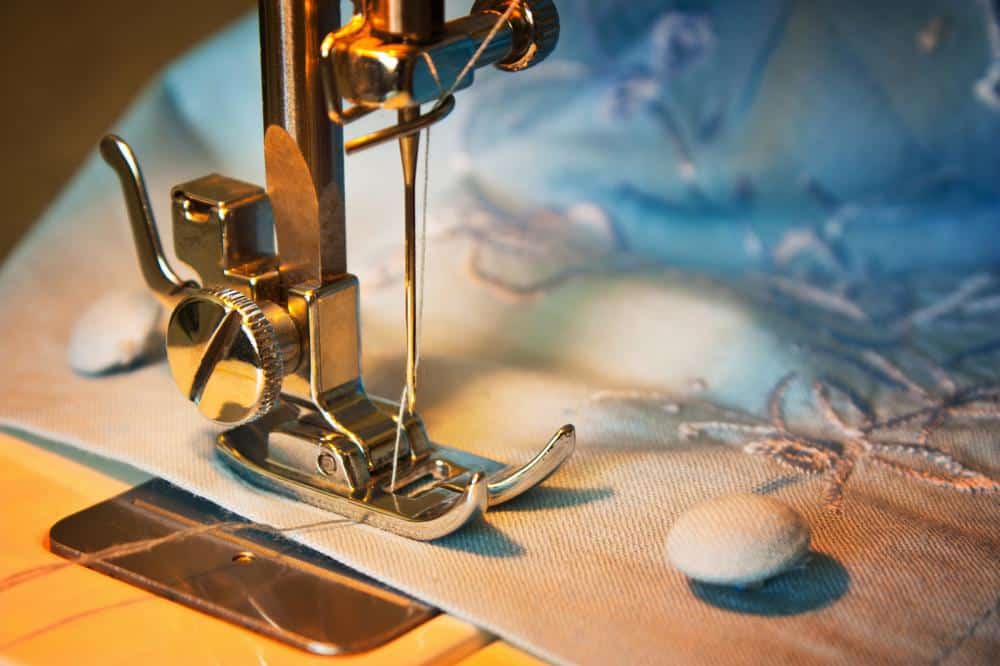 Once you have decided which type of sewing machine is required by your factory, you will need to decide which type of feed mechanism to purchase. Typically, industrial sewing machines have many types of feed capabilities and hence are quite expensive.

There are several dozen types of stitch methods when it comes to sewing and each requires about 1 to 7 threads. Simple stitches including loc, chainlock, overlock and coverstitches, are the most commonly used stitching methods in the industry.

The design and strength of the sewing machine varies and depends on the type of fabric you want to sew. For medium to heavy-duty materials like canvas, denim and leather, high-quality machines built with iron and aluminum are a good choice while basic-level industrial machines may be enough for light-weight fabric like cotton and silk.

Additionally, machines with a larger size will provide more surface area on the bed and more space under the foot. They will also be able to make more stitches per minute and hence are more expensive.

Check out our answers to commonly asked questions about sewing machines below.

Who, When and Where Was the Sewing Machine Invented?

Although many older machines are louder, most newer models are designed to be fairly quiet. Many newer machines can only be heard in the room used for sewing. If they do get louder, they probably need some routine maintenance or to be placed on more balanced work surfaces.

Are Old/Used Sewing Machines Worth Anything?

If you think your machine is valuable, check its model number and condition. Next, look online or at a local antique dealer to see how much similar machines are worth.

Most newer machines can sew buttons as long as they are capable of making a zig-zag stitch of medium width. If the button has eyes, then it can be sewn without much difficulty. You may, however, want to raise the machine’s foot slightly above the fabric. If a button has a shank, on the other hand, then sewing will have to be done by hand.

Can Sewing Machines Do Embroidery?

Most embroidery work is done by special embroidery machines. Embroidery requires unique stitches and movements that standard sewing machines aren’t capable of performing. Some sewing machines, particularly the more expensive ones, do come with a removable embroidery unit. This allows people to do all the work that’s needed without the extra space that’s required for a second machine.

Can Sewing Machines Do a Blanket Stitch?

Just like sewing buttons, most newer machines can do a blanket stitch since the requirements are similar. Since these tend to be more decorative, it’s a good idea to use thicker threads that can visibly stand out. You should also consider using an open toe applique foot, which will allow you to see where you’re going as you move the fabric. Thicker fabrics will mean thicker threads and needles.

Can Sewing Machines Do Overlocking?

Most sewing machines can sew paper, but you’ll need to do a few things to make sure your project is a success. First, use a slightly blunted needle since paper will blunt them further. You don’t want to waste your good needles. Second, use thick paper or card stock. Thin paper will easily tear and ruin your design. Finally, use bigger stitches. Bigger and wider stitches are less likely to tear the paper.

How Long Do Sewing Machines Last?

A modern computerized sewing machine can last as long as 25 years without any serious issues. Older and non-computerized machines can continue to work for decades. Some working sewing machines date back to the 1930s. If you want your machine to be one of them, then perform routine maintenance and have your sewing retailer perform tune-ups every couple of years. You can also send older machines back to the manufacturer for necessary repairs.

Return to all appliances