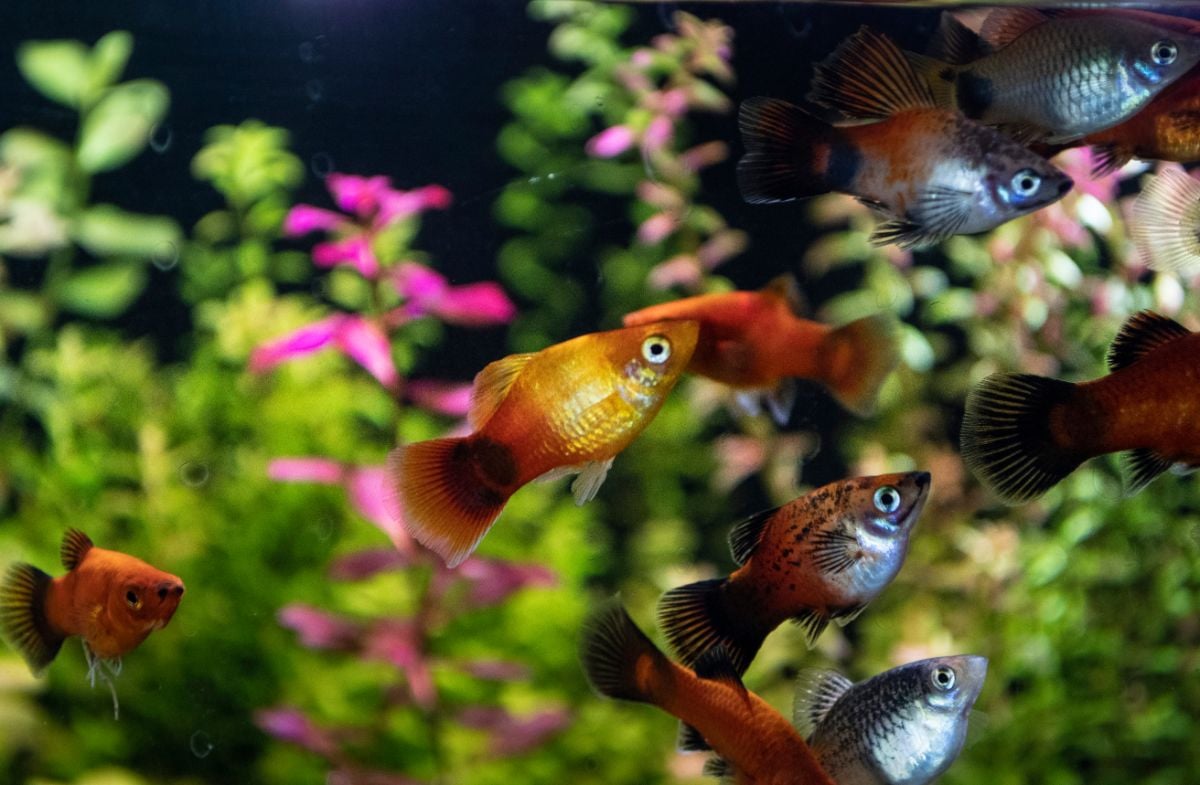 Platys are an easy fish to keep in your aquarium. They are docile, and get along with other types of fish. They also live bear their young, which makes them great for beginning breeders.

In fact, the ease of breeding likely plays a part in how many platy types are available today. They can be classified by color, pattern, and fin type.

Their bright colors and docile nature make them perfect for freshwater aquariums. If you don’t have platys in your tank, you are missing out. 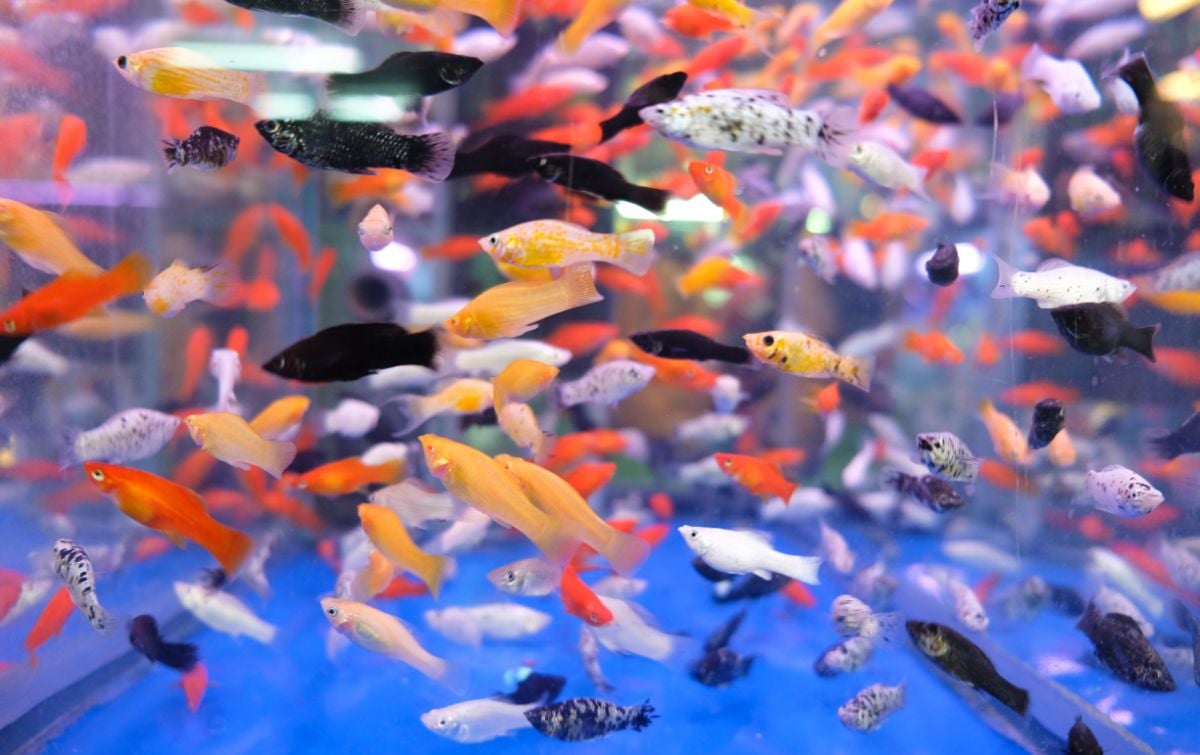 Platy fish are native to Central America and Mexico. There are two species of platyfish. The scientific names for them are Xiphophorus maculatus (southern platyfish) and Xiphophorus variatus (variable or variatus platyfish.

Most platys grow to 2-3 inches. Dwarf platys are smaller, at around 1 inch long. When they are taken care of properly, they can live for 3-4 years.

They do need a good size tank. They are happy in a 10-20 gallon tank. Organic plants can help keep the tank clean, and make the aquarium a bit more attractive.

Depending on the temperature inside your home, you may not need a heater. They need the tank to be between 70-82 degrees. If your home is cool, a heater is a good idea.

It’s a good idea to have between 3-6 platys, however they also do well solo. If you have males and females, be sure to have at least two females for each male. Males are prolific breeders, so extra females allows them to get a break from the male.

They are omnivores, and will eat just about anything you want to feed them. It’s best to feed them a varied diet for optimal nutrition. This can include fish flakes or pellets and freeze dried or frozen foods.

What to Keep With Platys

Platys love plants and other fish. When it comes to tank mates, you should consider other fish of a similar size and temperament. Some options are tetras, cory catfish, snails, bristlenose plecos, and rainbowfish.

Veiltail bettas can also be kept with platys. However, it’s best to avoid the more aggressive types of bettas.

Platys like the water to be slightly alkaline, and between 70 to 80 degrees. If you put plnats in yoru aquarium, you’ll need to choose plants that do well under these conditions.

Some of the best plants to pair with platys are hornwort, duckweed, and java moss.

When you are choosing a platy, it’s really all about looks. Platys have the same needs and temperament regardless of their coloring and pattern.

However, there is one consideration. If you plan to keep your platy with other fish, beware of tail nipping. Hifin platys have a larger tail. If your tank has species that like to tail nip, you should go with a pintail variety.

Platys are a vibrant colorful fish, which is one reason why they are so popular. In addition to different colors, there are different shades of colors that you can look out for.

Many platys have black coloring. They may be completely black, half black, or have a black tail.

Blue and green are popular colors as well. Yellow platys are often called gold or sunburst. Red platys are referred to as brick red, coral red, or velvet red. 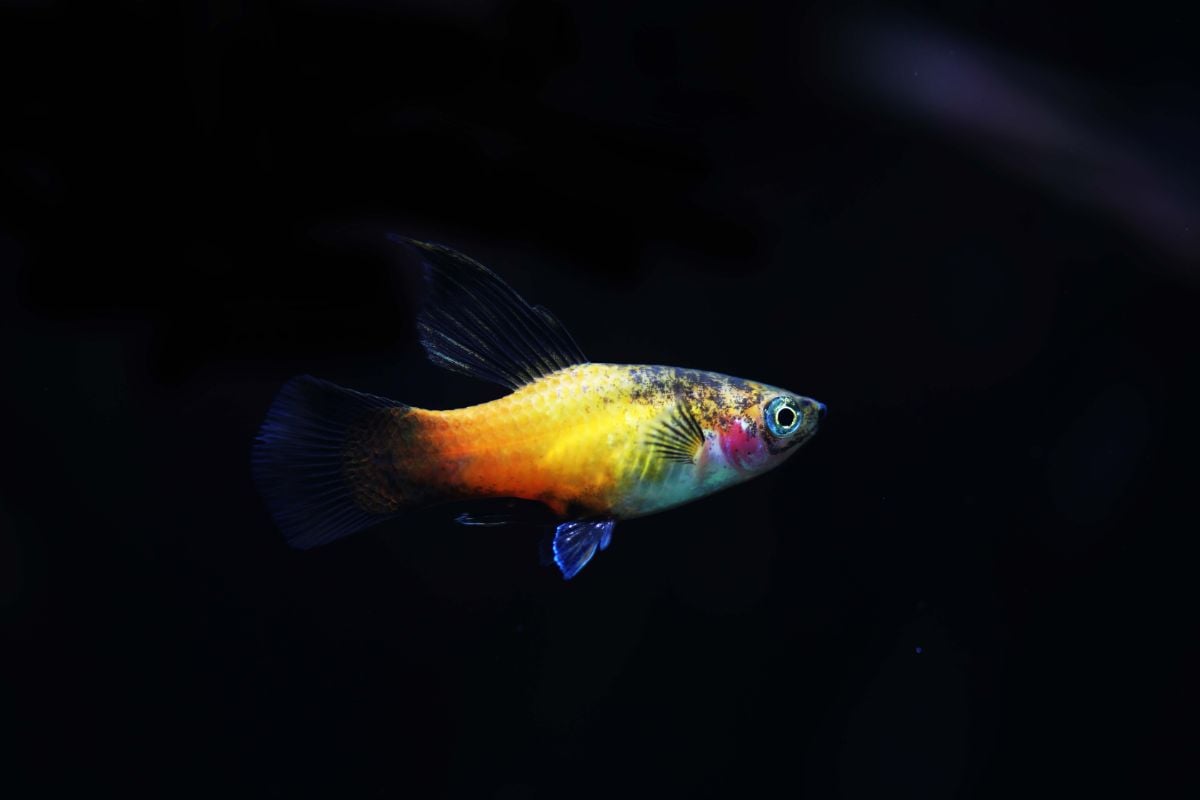 There are several popular platy patterns. The pattern they have is typically present in the name of the fish. For example, a wagtail sunburst would be a yellow fish with a wagtail.

Wagtail platy’s have a black tail and fins. Red and gold are the most common colors for wagtails, but they can be found in any color. They can also be combined with other patterns. A variegated wagtail, for example, will have the color pattern of a variegated platy, and the tail markings of a wagtail.

A variegated platy has large black splotches. They are sometimes called painted platys, because the black markings look like they were painted on with a brush.

The variegated pattern can occur with any base color, and other patterns as well.

The salt and pepper platy is similar to the variegated platy. Instead of having large spots of black, this fish has small black dots. Imagine someone sprinkled ground pepper over the fish, and you can picture this fish in your mind.

The calico platy is similar to the variegated platy. Instead of having black spots all over its body, the calico platy only has spots near its tail. This is a rare type of platy. If you can find it, you should certainly grab them!

Formal attire isn’t just for penguins. The tuxedo platy has a large swath of black running along each side. It’s often seen in red or gold platys, but can occur in other color combinations as well. It call also be combined with other color patterns.

The rainbow pattern means that the play has many different colors. These typically begin with dark colors and then light colors. They typically have a black tail.

This pattern is found on the tail. The tail has a black line on the top and bottom. This calls attention to the tail color. Like most patterns, this can be combined with other patterns and colors.

Some types of fish are easily classified by tail or fin type. Bettas, for example, have a wide variety of potential tails. Platys, on the other hand, only have two tail types. These are hifin and the pintail.

The hifin platy is the most common tail type. The tail and dorsal fins are longer than those of the pintail. This can increase the risk of disease. It’s important to keep the fish happy, stress free, and in optimal water conditions.

Larger fins are also more likely to be nipped. This can lead to disease if the tail is injured.

The pintail platy is easy to recognize. The middle of the tail fin extends out like a needle, or pin. They are often mistaken for their relatives, the swordtail, because their tails are quite similar.

Now that you know about the basic types of platy, it’s time to look at some specific platys. These platys are some of the most popular and well known. You may even find your new favorite right here. 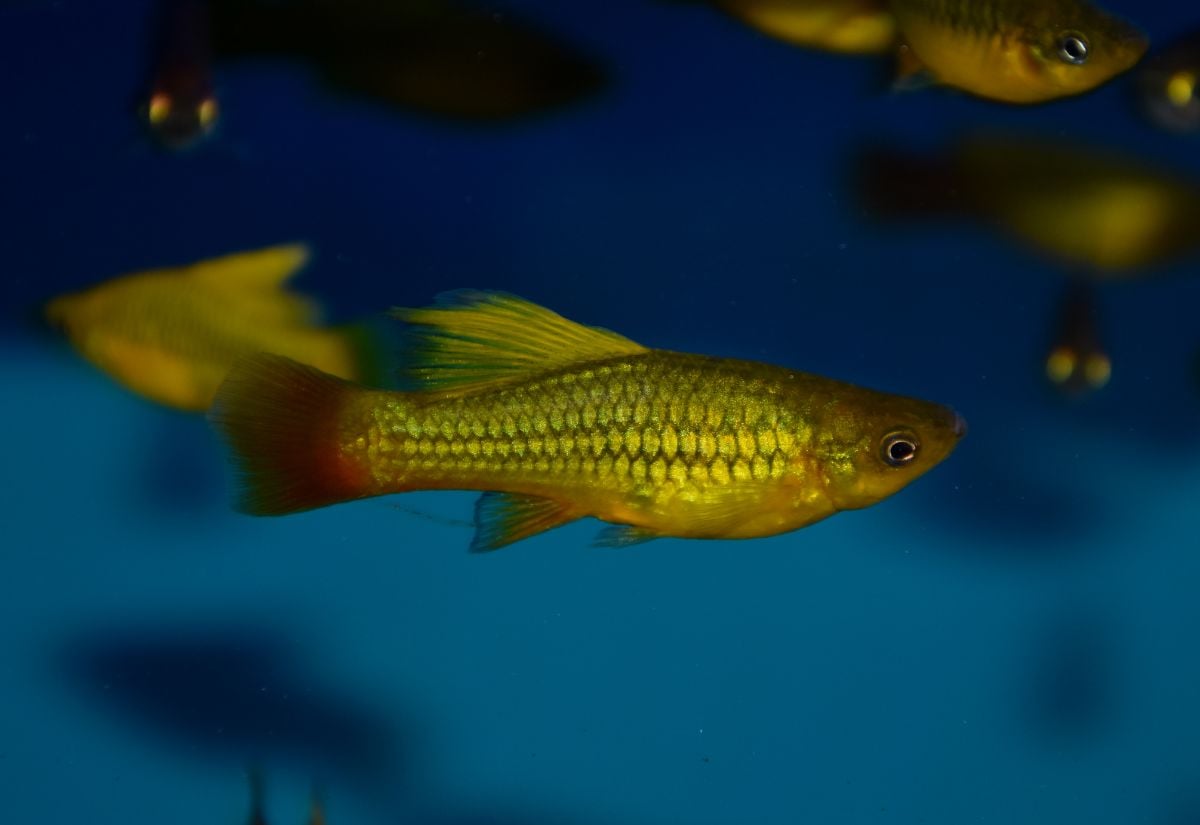 It may sound like something from a comic book, but the green lantern platy isn’t a fictional character.

It’s body is green and iridescent. The scales will shine blue, silver, and green beneath the lights of an aquarian, making it one of the most beautiful platy varieties.

It’s a rare species, which makes it highly sought after.

The panda platy is one of my favorites. As the name suggests, this fish is black and white like a panda. It has a charming appearance that is very popular with platy owners.

Some have blue or pink coloring around the gills as well. 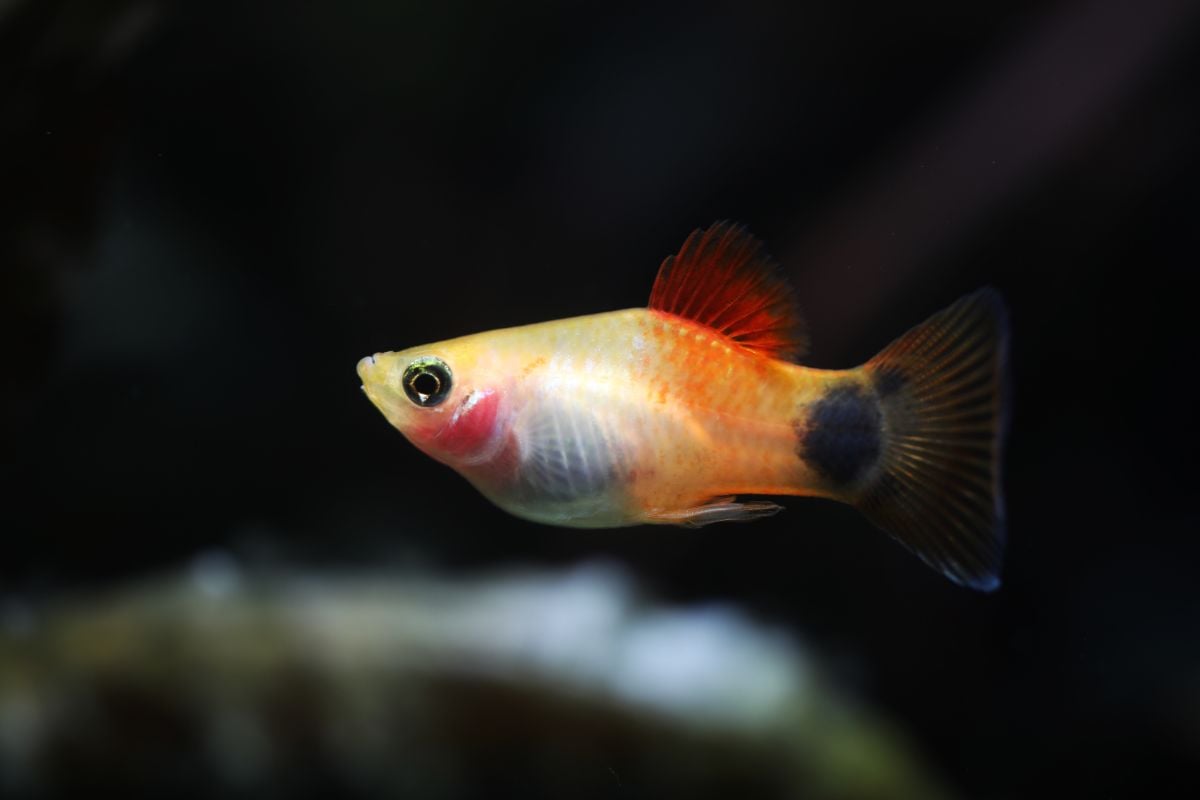 The micky mouse platy is very popular due to its pattern. The base of its tail has one large black spot, and two smaller spots. These come together to make a micky mouse logo.

The micky mouse platy can be yellow or gold, red or orange, or blue. The fins can be light yellow to red. Some are tinged with black.

The sunset platy resembles a sunset. It’s also known as the sunburst platy. The front half of the fish is a light yellow or orange. It becomes deeper and brighter, turning to a bright orange on the back half of the body.

You can find the sunset platy in wagtail, hifin, and pintail varietites.

The Malibu sunset platy looks like the moon and sun together. The front of its body is silver to neon blue, which blends into an orange around the tail.

The black hamburg platy is mostly black, with a few distinctive characteristics. The fins are clear, and the head and belly are a pale belly.

One of the best things about the black hamburg platy is its scales are iridescent. 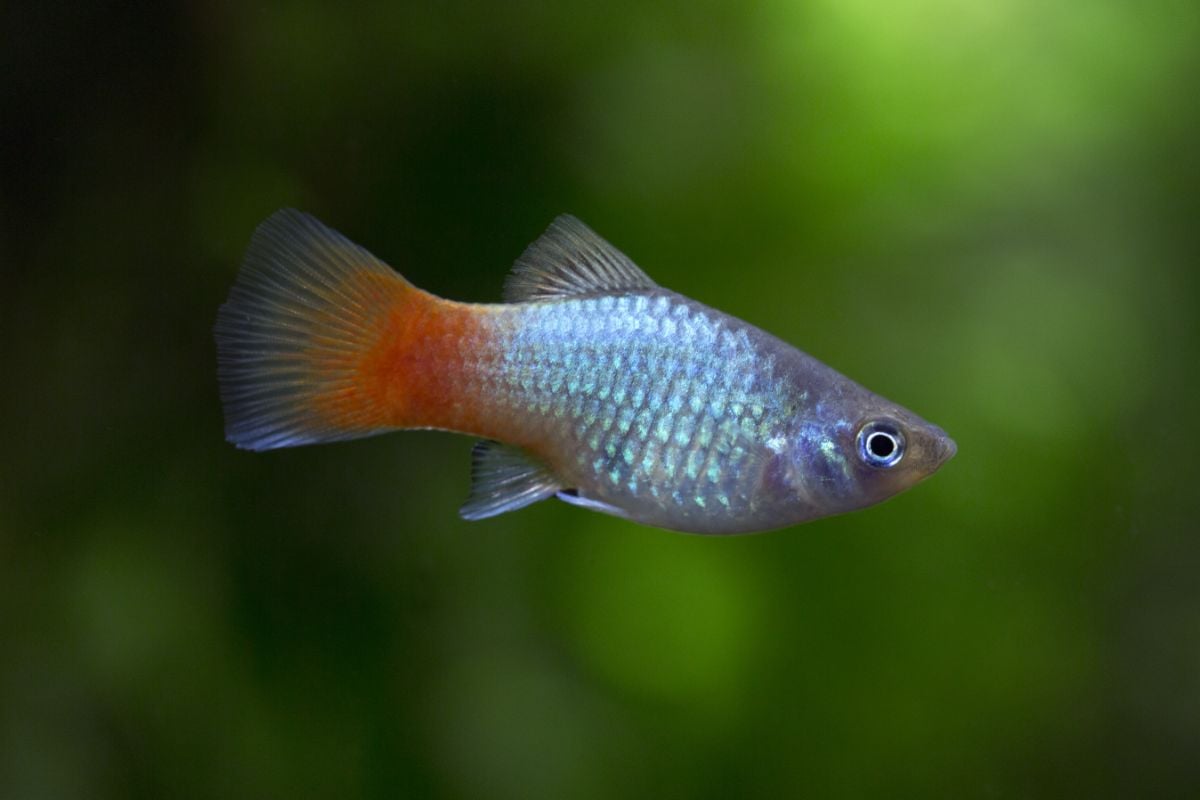 The neon blue wag is fairly self-explanatory. It has a black wagtail, and a light blue body. Many also have an iridescent sheen that makes them even more beautiful.

The coloring and pattern looks a bit similar to a koi fish. 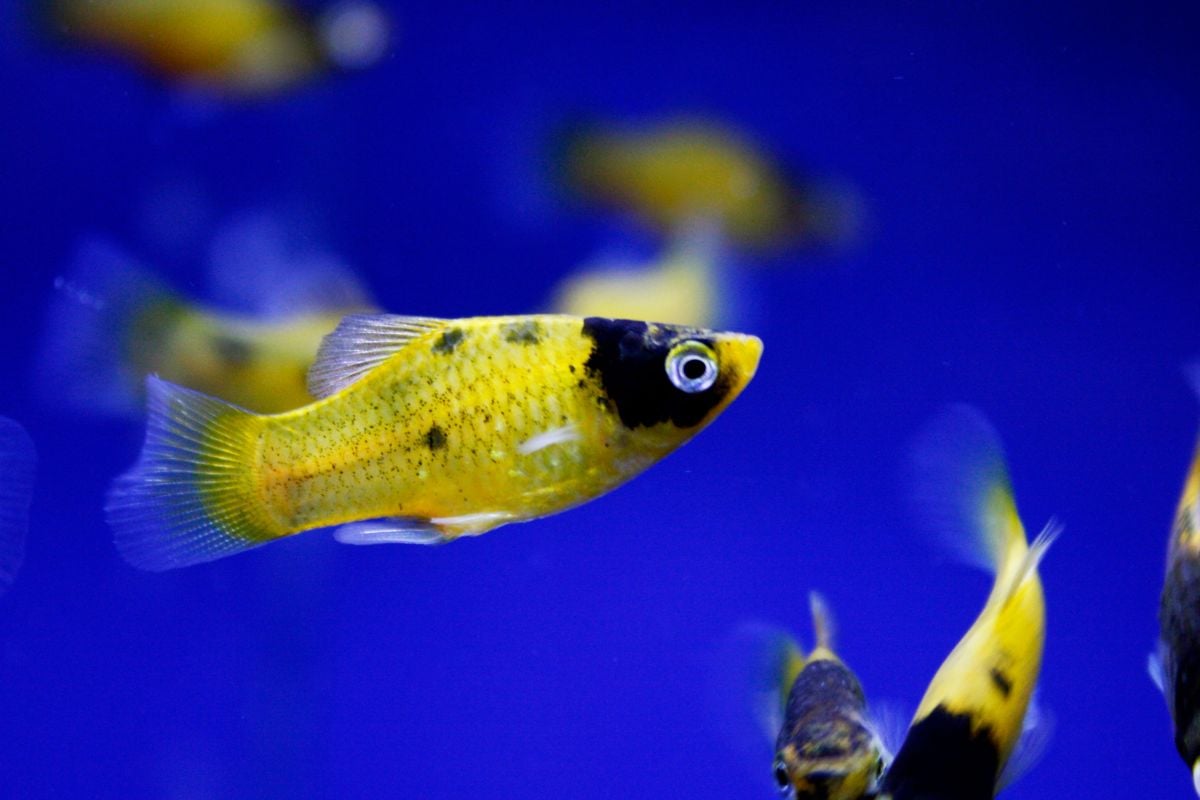 The bumble bee platy has black spots and a yellow body. It typically has a black head and a pale to bright yellow body. You’ll be amazed by this adorable fish.

The dalmatian platy is similar to the panda platy. Its body is black and white. However, instead of having white and black areas, the dalmatian patty has a white body with black spots, like a dalmation.

The swordtail platy is a hybrid of a platy and a swordtail. These are the rarest type of platy, because they have the elongated tail of a swordfish.

Most are green,with a distinct black stripe down their body.

They are a bit more difficult to care for than other species, because they require a water temperature of 70 degrees.

Platys and swordtails are closely related. In fact, they can easily interbreed. When you purchase a platy or a swordtail, it’s impossible to know if it’s pure, or a hybrid.

The only major difference between the two is that the male swordtail has a long sword shaped fin. Of course, this also resembles the pintail platy.

1. Are platy fish good for beginners?

Yes, platy fish are one of the easiest fish to care for. They are hardy, which makes them good for beginners.

Platys are schooling fish in the sense that they are social. They do well with other platys, as well as other species of a similar size and temperament.

3. Do platys require an air pump?

Yes, platy’s need an air pump to survive in a tank. They do not do well in a low oxygen environment. A simple air pump oxygenates the water, so the platys can breathe.