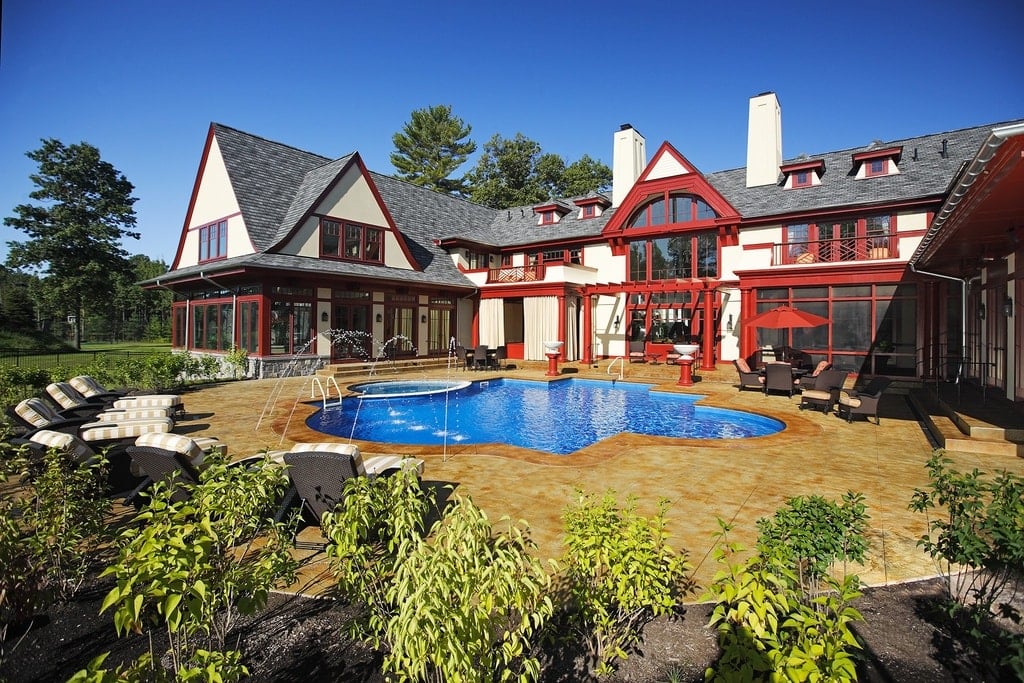 There is a mansion that stands on eight acres located in the upscale Saratoga Springs community of Meadowbrook Estates. This mansion is now up for auction on December 19th with the reserve set at $4.9 million.

The mansion is measured at 25,000 square feet with five bedrooms, eleven bathrooms, a marble-floored foyer with double staircases, a great room with a stone fireplace, a mahogany-paneled dining room, a gourmet kitchen, a multi-row home theater, and an eight-car garage. The property also showcases an indoor basketball court, fitness center with sauna, one-lane bowling alley, a game room, tennis courts, and both indoor and outdoor pools.

The mansion in Saratoga Springs that will go for auction on December 19th is being handled by Platinum Luxury Auctions.

Saratoga Springs is all about “Health, History and Horses,” as the local slogan goes. The many natural mineral springs, favored by the original Mohawk Indian tribe for their restorative properties are the only naturally carbonated mineral springs east of the Rocky Mountains. Each of the springs in the area has different mineral combinations and different springs were used in the hope of curing everything from skin problems to gout.

The springs were developed to vie with the most popular spas in Europe and received hundreds of repeat visitors each year who would come to “take the waters.” The first frontiersman to discover the springs was Sir William Johnson, Superintendent of all Indian affairs in the British Colonies, who arrived in 1771. Following behind Johnson, Gideon Putnam was a visionary who built the first tavern and inn in 1802, and from there sprang a string of important hotels and spas that catered to luminaries such as Susan B. Anthony, John Philip Sousa and Oscar Wilde.

Casinos were then built followed by the Saratoga Race Course, which is still considered one of the top ten best sporting venues in the country by Sports Illustrated even though it is the oldest racetrack in the country. The track traces its beginnings to 1863.

Coming up for auction on December 19th, this 25,000-square-foot mansion on eight acres is located in the affluent Saratoga Springs community of Meadowbrook Estates. Most recently listed at $8.6 million, the auction reserve is set at $4.9 million. Designed for a large family, the mansion has five bedrooms, eleven baths, a marble-floored entry with double staircases and a great room with stone fireplace and exposed beams.

There is a mahogany-paneled dining room served by a gourmet kitchen with large island, a multi-row home theater and an eight-car garage. Sports and fitness lovers will have an indoor basketball court, fitness center with sauna, one-lane bowling alley, tennis courts with both indoor and outdoor pools. There is also a game room with billiards and multiple lounge games.

Only an hour from New York City in the Adirondack foothills, the estate will go to auction on December 19th with reserve set at $4.9 million.