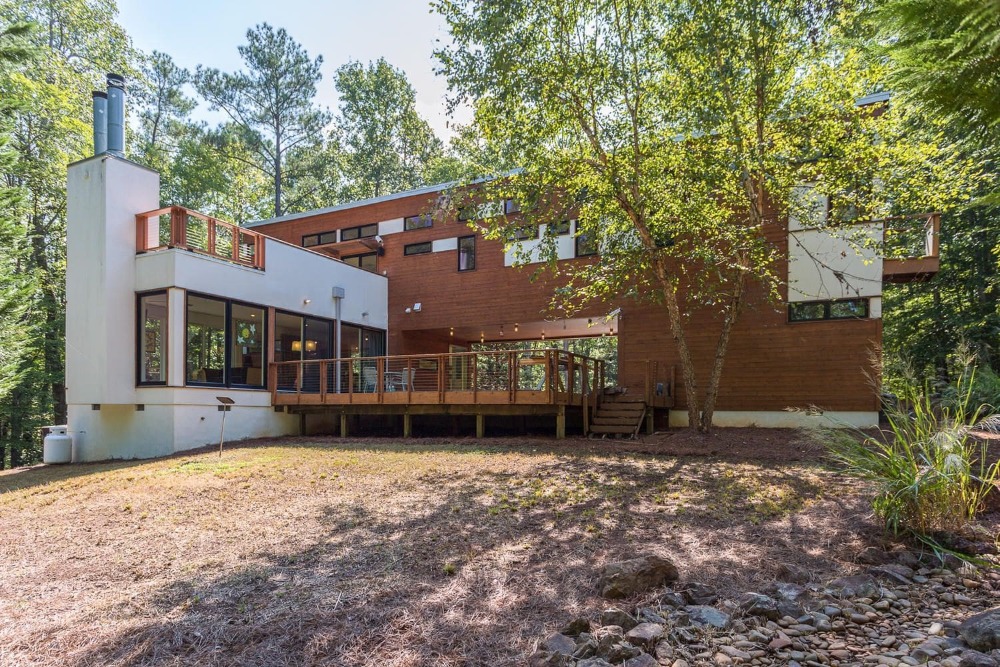 The stunning original contemporary Dwell House that was built through a challenge by Dwell Magazine is now going to auction!

The end product of Dwell Magazine’s challenge to 16 international architects to design a modern prefab home for $200,000 is now going to auction!

With over 3,000 square feet, this contemporary home surrounded by a magnificent natural landscape boasts open-plan living, dining, and kitchen along with a large island for gathering. The home also includes three bedrooms and three bathrooms along with a large deck area.

In 2003, Dwell Magazine challenged 16 international architects to design a modern prefab home for 0,000. The winning design came from Resolution: 4 Architecture of New York City. The modules were manufactured and shipped on five flatbed trucks to a hilltop site in Pittsboro, North Carolina where the home was assembled and finished.

The home created such a stir that more than 2,000 people came to view it upon its completion in the summer of 2005. The New York Times, Wall Street Journal, and Washington Post all carried major stories about it.

Although the first prefab home was documented in the late 1100s when an entire castle was built in panels with its pegs and hardware packed in barrels for transportation and the entire structure erected overnight, prefabs became popular in the United States when the first Sears prefab hit the market in 1902.

They have gained more sales in the current sluggish economy with many people looking for alternative housing that is more economically feasible than new construction. The trend in architecture for the new models is innovative and forms from domes to houses in the round to cutting-edge contemporary are available to meet various tastes.

On November 15th, the original Dwell House will go to auction. Located on a 9.14-acre hilltop surrounded by federal land, the contemporary home takes full advantage of the views of the surrounding countryside from its plethora of glass walls. At 2,121 square feet and an additional 1,854 square feet of deck space, the house has an open-plan kitchen, dining, and living room with fireplace open to woodland views and the layout is conducive to both family living and entertaining.

The cook’s kitchen is decked out in stainless with high-end appliances and a large island for gathering. Included are three bedrooms, three baths, two fireplaces, and four decks including a roof deck for sunning or entertaining. Used only as a weekend getaway by the owners, it is not much more than a stone’s throw from a boat ramp at Robertson Creek that feeds into Jordan Lake.