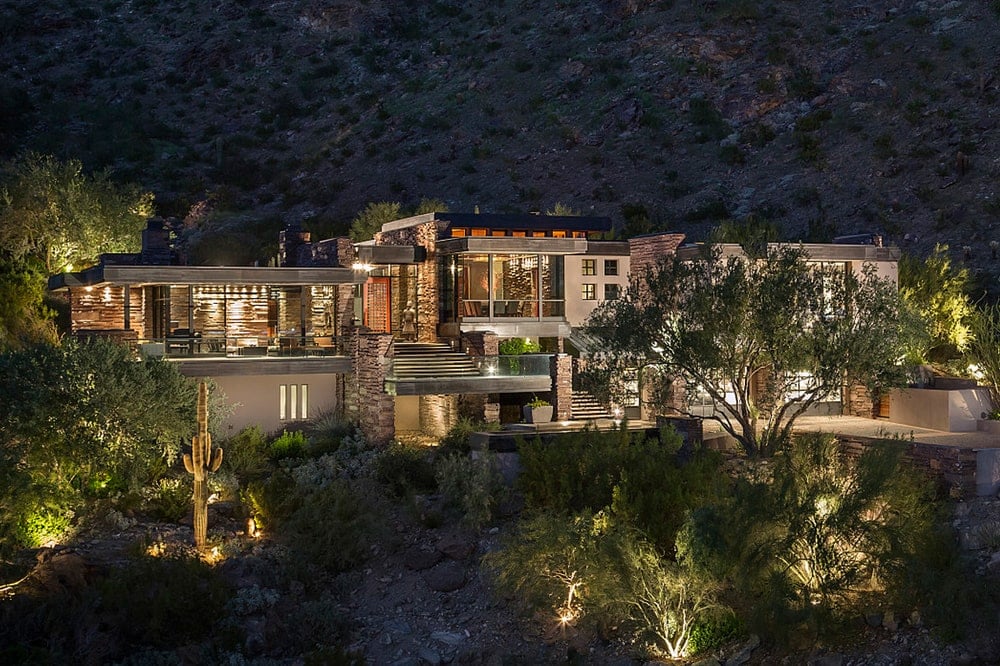 There is a mountainside mansion in Presario Point, an affluent suburb of Phoenix in the Ahwatukee Foothills that will go to auction with no reserve on February 12th.

The mansion is measured at 8,900 square feet with a pivoting front door, five bedrooms, nine bathrooms, a 12-seat theatre, a chef’s kitchen, an elevator, a safe room, and automatic shades and screens. It also boasts of vanishing glass walls, a heated diving pool, and an intimate family space with a warm fireplace.

The no reserve auction of the mountainside mansion in Presario Point, Phoenix is being handled by Supreme Auctions.

Had anyone bought this exceptional home just a little earlier, access to the Super Bowl would have meant a short hop in the car rather than a tedious round trip airline flight. With good weather, friendly people, and a vibrant economy, Phoenix has attracted Apple, Amazon and General Motors among many top corporations, so is it any surprise that the 2015 Super Bowl was also held there?

The city also has some of the country’s best mid-century and modern residential architecture – a legacy from Frank Lloyd Wright’s Taliesin School in nearby Scottsdale.

Situated on 10 acres in Presario Point, an affluent suburb of Phoenix in the Ahwatukee Foothills, against the 16,000 acres South Mountain Preserve, this 8,900-square-foot contemporary is impressive upon entering through the pivoting front door and doesn’t stop there. Filled with light and stunning views from every window, the estate has five bedrooms, nine bathrooms (five en suite), a 12-seat theatre, a chef’s dream kitchen with a walk-in refrigerator and a freezer, an elevator, safe room, and automatic shades and screens.

Glass walls open to create a vanishing threshold between outdoors and indoors, making it possible to enjoy the climate and hear the waterfall as it cascades into the heated diving pool. With lots of space for entertaining both indoors and out, the home also has intimate family spaces to cozy up in front of a cheerful fireplace on a chilly evening. For more information.