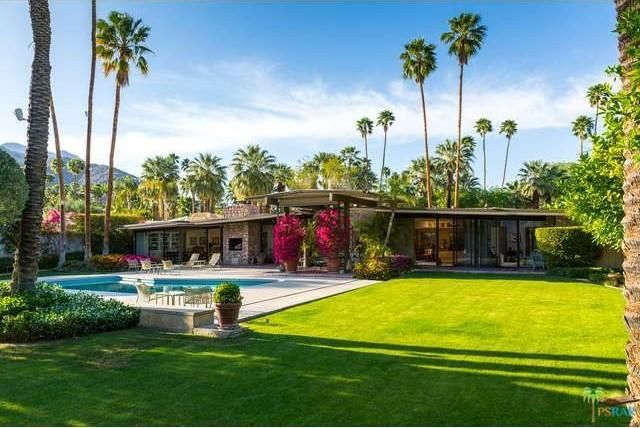 The 4,000-square foot ranch style house in Palm Springs where legendary actor Kirk Douglas and his wife Anne Buydens lived for over 40 years recently sold for $50,000 over asking price at $3.5 million. The architectural masterpiece captures a broad swath of Hollywood history both past ad present.

The Palm Springs house of legendary actor Kirk Douglas sold for $3.5 million, fifty thousand dollars over its asking price. Located in the also-legendary district of Las Palmas in Palm Springs, California, the Kirk Douglas house was steeped in Hollywood history.

The five-bedroom, seven-bathroom house backs up to an estate currently owned by actor Leonard DiCaprio. Before the house next door was bought by DiCaprio, it was owned by singer and actress Dinah Shore.

Douglas and Shore had a gate installed in their shared backyard wall so their guests could mingle. A plaque still maintained on the Douglas side of the backyard wall jokingly describes Shore’s tennis court as “the Douglas B-Court.

Kirk and wife Anne Buydens had many celebrity guests of his own at his Palm Springs house. Frank Sinatra purportedly enjoyed cooking in their kitchen. Real estate agent Jim Schwietz deemed one bedroom the “Kate and Spencer” room because Katharine Hepburn and Spencer Tracy allegedly carried on their affair there.

The Kirk Douglas house was the second house designed by legendary Palm Springs modernist architect Donald Wexler in 1954. Kirk Douglas and his wife Anne lived in their Palm Springs house for over 40 years. Kirk Douglas, who was the father of Michael, Eric, Joel, and Peter Douglas, died in 2020 at the age of 103.

The Douglas house stands on the south side of Via Lola, known as Millionaire’s Row in Douglas’ time. The neighborhood was also known as the Bel Aire of Palm Springs. It remains one of the most desirable districts in Palm Springs. Said realtor Jim Schwietz, “The are many houses in Las Palmas that are multi-million dollar celebrity homes, but only a few estates designed by famous architects and maintained by iconic celebrity ownership that honor the spirit of the integrity of the period.””

But the new buyer didn’t have to be satisfied with Hollywood history alone.

The Kirk Douglas house has a famous curb appeal. Visible from the street is a beautiful wall of flagstone and a roof with a gentle slope. The front gate opens to a post and beams ranch-style house. The interior is built on an open concept with living spaces divided by stone half-walls that are high enough to give residents and guests some distance from each other but low enough to let air circulate and let in light from the skylight and windows. Floor to ceiling windows affords a view of the grounds, which include a swimming pool and tennis court.

A private wing of the over-4,000-square foot house has four en suite bedrooms, sequestered from the rest of the house by butler doors. The capacious kitchen was completely redone in the 1980s. There is an additional bedroom and a guesthouse or servant’s quarters. Douglas expanded the original design to include a formal dining room in 1976.

Kirk Douglas did not spend his final years in his Las Palmas home. Kirk and Anne sold Las Palmas in 1999, but the new owners were careful to sell to the home to a “devoted caretaker” who appreciated the home and who would preserve its history.