In 2018, Kelly Clarkson and husband Brandon Blackstock bought an Encino “farmhouse” for themselves and their four young children. Notable for unpretentious design and thoughtful features for easy living, the house represents the ultimate in farmhouse living. But with the COVID-19 epidemic Clarkson and Blackstock have offered it for $9,995,000. 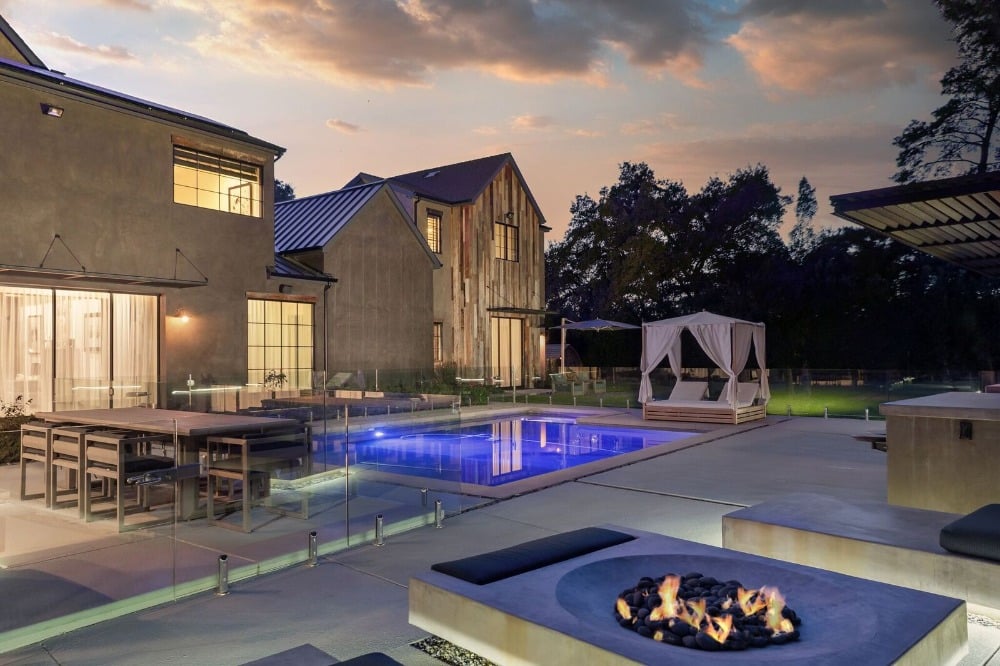 Kelly Clarkson is a singer, songwriter, actress, author, and television personality. The winner of American Idol and two Grammys, Clarkson’s debut single “A Moment Like This” shot skyward to the top of the US Billboard Top 200.

Clarkson has sold over 25 million albums and 40 million singles worldwide. She is a coach on NBC’s The Voice. And as a mom she has some of the same concerns as any other mother.

In December of 2017, the home Kelly Clarkson shared with her husband Brandon Blackstock and two small children was ransacked by a burglar.

“We got robbed just last night,” she told a reporter from Extra while she was walking the red carpet at the 2017 Billboard Women in Music event. “it was insane. We got home and our whole house was, like, bashed in.” Of special concern to Clarkson was the fact that her children’s bedrooms had received special attention from the home invaders.

So, Clarkson and her husband did what any other family of substantial means and rural roots might do. They bought an $8.5 million “farmhouse” in Encino, a district in Los Angeles, in June of 2018, paying the full asking price. And in May of 2020, they decided to offload it at an asking price of $9.995 million.

What kind of farmhouse do you get in Los Angeles for $9.995 million?

Clarkson’s home is located on half an acre in Encino, a neighborhood in the San Fernando Valley within the city limits of Los Angeles. Encino is known for its connections to nature. There are golf courses, cricket pitches, a sports complex, and an enormous, 6.5-acre leash-free zone for dogs. About 1 percent of the 40,000 residents of Encino have vegetable gardens in the second most populous city in the United States.

The Royal Oaks subdivision where Clarkson’s home is located has been popular with Hollywood stars for nearly a century. Once the home to John Wayne. Roy Rogers, and Clark Gable, it currently hides the homes of Samuel L. Jackson, David Hasselhoff, and Ice Cube.

The Clarkson estate consists of two buildings. There are eight bedrooms, eleven bathrooms, a home theater, a gym, and a temperature-controlled wine cellar in the 9,839 square foot main house. Its façade is described as “unpretentious.” There is a funky distressed wood motif with different shades of wood running up the sides of the house in a diagonal pattern. There are pitched metal roofs. The window frames and garage doors are black. There is also a two-story guest house.

Custom-built for Clarkson and Blackstock in 2018, the sleek, modern, highly functional house was designed to accommodate the needs of their four kids. The spacious kitchen sports seating for six with three kitchen islands. The formal dining room and sitting area have barn-style doors. And the kids have a study area with a row of four wooden desks.

Kelly Clarkson seems to be in a selling mood. Sheltering in place with her family at their ranch in Montana, Clarkson also has offered her20,000-square-foot lakeside country house near Henderson, Tenn., 25 miles outside of Nashville, for $7.5 million.