Check out this gorgeous Spanish-inspired mansion formerly owned by Holly Madison. It can now be yours for only $8.225 million. It's really nice. 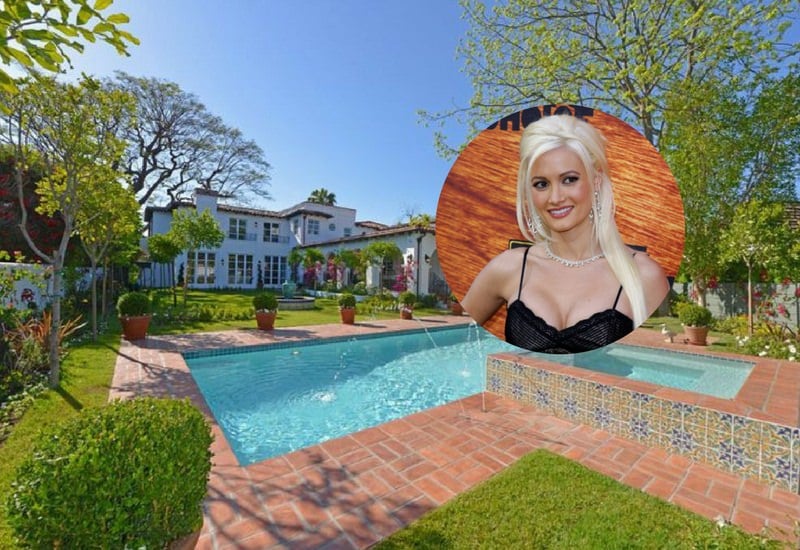 Having purchased it only 2 years prior for $7.1 million, she earned a tidy $1.125 profit (less transaction fees and real estate commissions). Not too shabby.

Holly started her career inside the playboy mansion as one of the stars in the reality show in E! “The Girl Next Door”, but Holly had bigger dreams. She was also Hugh Hefner’s girlfriend. She slowly boosted her career and became a junior photo editor during the third season of the show, she also became a part of the team that designed the show. Yet, due to her break up with Hefner, she quit the show.

She took different gigs, from being part of the “Dancing with the stars” show to having her own reality show but when everyone thought that she had all her talents showed, she published a book that became number one in the New York Times best seller list: “Rabbit Hole: Curious Adventures and Cautionary Tales of a Former Playboy Bunny” along with 2 other books. Her “Rabbit Hole” book stirred quite a scandal as it reveals some private goings-on inside the Playboy mansion.

I think this is a gorgeous home and can see why its sale caused a bidding war netting Holly an additional $225,000 (it was originally listed at $8 million even).

Also known as the “City of Angels”, but if we are to translate this Spanish to English “Los Angeles” means “The Angels”, such a beautiful name for a city. This city is the cultural and financial center of Southern California. Los Angeles was once part of Mexico but due to a treaty it was sold to the US.

Three of the major film studios can be found in Los Angeles: Paramount Pictures, 20th Century Fox, and Universal Pictures. This city is where culture, entertainment and performing arts come together to produce arts and movie. Needless to say that many celebrities live here and enjoy the scenic view of mountains and living the glamorous life.

Holly has done well for herself, leveraging her minor celeb status as a Hefner girlfriend into a best-selling author (albeit doing so by revealing some private happenings in the mansion).

CelebrityNetWorth.com reports her net worth at $6 million. Since that number was released before the sale of this home, we can add a cool million dollars to it since that’s approximately how much she profited. It pays to write a best-selling book. The question is what will Holly do next? She seems fairly savvy so it’s likely she will continue building up her career. With 10 million Instagram followers, she’s built up a platform from which anything is possible. Celebs with Instagram accounts can earn huge bucks with sponsored posts.