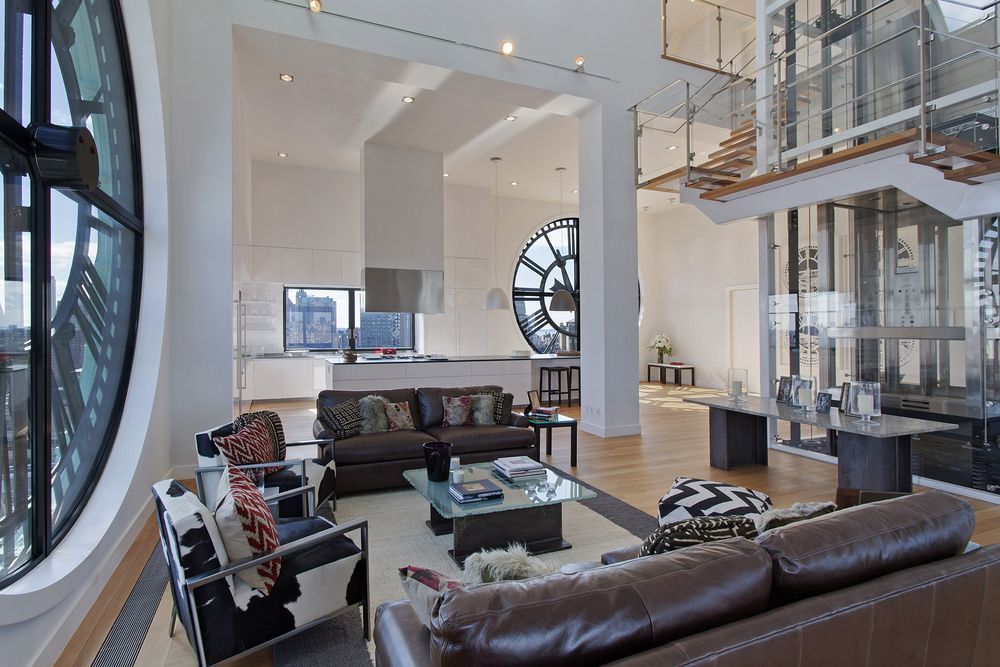 If "bachelor pad" makes you think of a messy, cramped "man cave," then you haven't seen Esquire Magazine's 2011 Bachelor Pad of the Year. Listed for $15 million, this 6,000+-square foot clock tower home has a glass elevator, a rooftop cabana, and more. Check out this charming penthouse for yourself.

When most people think of a bachelor pad, nothing fancy comes to mind.  But Esquire Magazine’s Bachelor Pad in Brooklyn, NY is another story.  This clock tower-mansion is now on the market, listed for $15 million.  It was named “Bachelor Pad of the Year” in 2011.

Originally built in 1914 as a factory, the landmark Clock Tower building was converted into luxury condos in 1998.  Designed for 21st-century lifestyles, this penthouse sports a contemporary look.  It’s a 6,813-square foot triplex with a living area that looks even larger than it is because of its open-concept floor plan and 14-foot, clock-face window.

There’s another living room situated cozily in a corner of the home.  This comfortable spot features large windows that look out on the bustling cityscape.  Throughout the home, 16 to 50-foot ceilings make the surroundings seem that much more impressive.

The galley kitchen is spacious and bathed in natural light.  Like many modern kitchens, it has an island that offers space for casual dining.  Adding to the room’s charm is its clock-face window.  Its gray countertops and light cabinetry go well together, giving the room a simple yet stylish appearance.  There is a separate dining area too.  To match the rest of the house, it’s decked out with a clock-face window too.  The outside of the building is equipped with four of these clocks, and they’re all fully functional.

This home in the Big Apple has three bedrooms, four bathrooms, and a home gym.  Here’s a look at one of the baths to give you an idea of just how lavish this pad is.  It’s equipped with two vanities.  At the end of the long room, you’ll find three steps leading to a platform, where a freestanding tub takes center stage, with a slanted window in front of it to welcome natural light into the room.

When you’ve seen all the living areas and sleeping quarters, you can take the glass elevator to the rooftop cabana and deck.  From there, you can enjoy views of the Empire State Building.  The deck is partially enclosed in glass railings, both for safety reasons and to give viewers an unobstructed view of New York’s picturesque skyline.

At least four features make the place unique.  First, there’s the three-story floating staircase.  Then, there’s Charlotte, the life-sized digital hologram.  She’s on hand to wow guests, and she keeps an eye on the premises at all hours of the day and night, drifting through the atrium, walking along the walls of the living area, and taking a seat at the bar.

Another innovation that sets this house apart is the Digital Loft.  It’s equipped with a 40-foot digital viewing system that displays regular doses of customized social media feeds.  Last, but certainly not least, is The Study, also known as the Office of the Future, which boasts a high-tech desk with a touch screen equipped with infrared sensors.

Esquire is a men’s magazine that offers articles on everything from cooking tips to fashion to politics.  Its original editors and publishers came up with the idea for the magazine in 1932.  The periodical’s moniker came from a letter that mistakenly gave editor Arnold Gingrich the suffix Esq.   The magazine’s designated “bachelor pads” are used to host charity events and other gatherings. 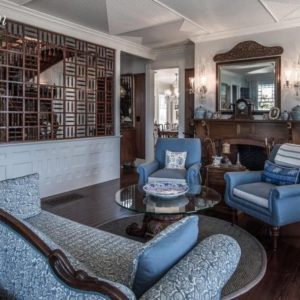 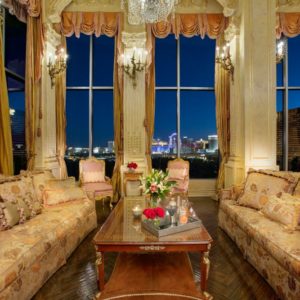