Edgar Bronfman, Sr. had contributed much to the business world in the form of Seagram Whiskey and he has helped a lot of Russian Jews in his term as president of the World Jewish Congress. His home along the Aspetuck River in Westport, Connecticut is now on the market priced at $7.995 million.

The house is measured at 9,000 square feet with seven bedrooms, nine bathrooms, and seven fireplaces. The house also boasts of a great room, formal dining, a family room, an office, a game room, a fully equipped chef’s kitchen, pantry, and staff quarters. The grounds include formal gardens, a three-car garage, a swimming pool with a spa, and a separate artist’s studio.

The Westport, Connecticut home of businessman and philanthropist Edgar Bronfman, Sr. is listed by William Pitt of Sotheby’s International Realty.

Businessman and philanthropist Edgar Bronfman, Sr. knew the warm and restful atmosphere he wanted to create on the 13 acres he owned along the Aspetuck River in Westport, Connecticut, and finding an 1832 chestnut barn in nearby Weston became his inspiration. He purchased the barn and had it moved to the building site and hired the architectural firm of Michael Greenberg & Associates to carry out the design of the estate using the barn as the central core of the main house and as the overall theme of the property.

Leading a busy life as president, treasurer, and chief executive of Seagrams, which was owned by his family, Bronfman wanted a retreat near his Manhattan home. While growing that business internationally, he was also the president of the World Jewish Congress, a position he held from 1981 to 2007.

Bronfman owned many luxurious private estates over the years, including estates outside Charlottesville, Virginia, and Westchester County, New York; a home in Sun Valley; and his main residence of 40 years – a co-op on Fifth Avenue that broke the Manhattan sales record in 2014 shortly after his death. New to the market is his Westport, Connecticut retreat.

An unusually large spread of land within the Westport community and with 759 feet of river frontage, the setting was perfect for developing a rustic, but elegant retreat. At the core of the 9,000-square-foot main house is the restored barn and also included are seven bedrooms, nine baths, and seven fireplaces. Additional rooms include a great room, formal dining, family room, office, game room, fully equipped chef’s kitchen, pantry, and staff quarters. The property also has formal gardens, a three-car garage, a swimming pool with a spa, and a separate artist’s studio. Priced at $7.995 million. 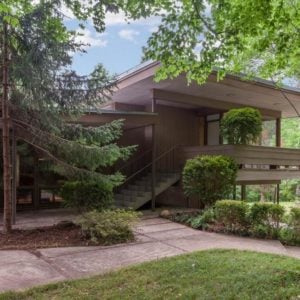 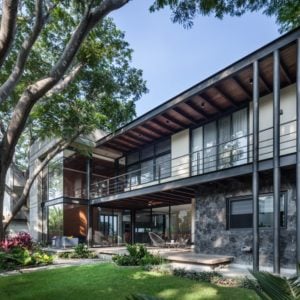