A Beverly Hills mansion once owned by former President Donald Trump is for sale. The Rodeo Drive estate boasts 11 bedrooms, 12 full baths, a swimming pool, sauna, and sports court. Get a closer look at this prime piece of real estate; it won't be on the market long. 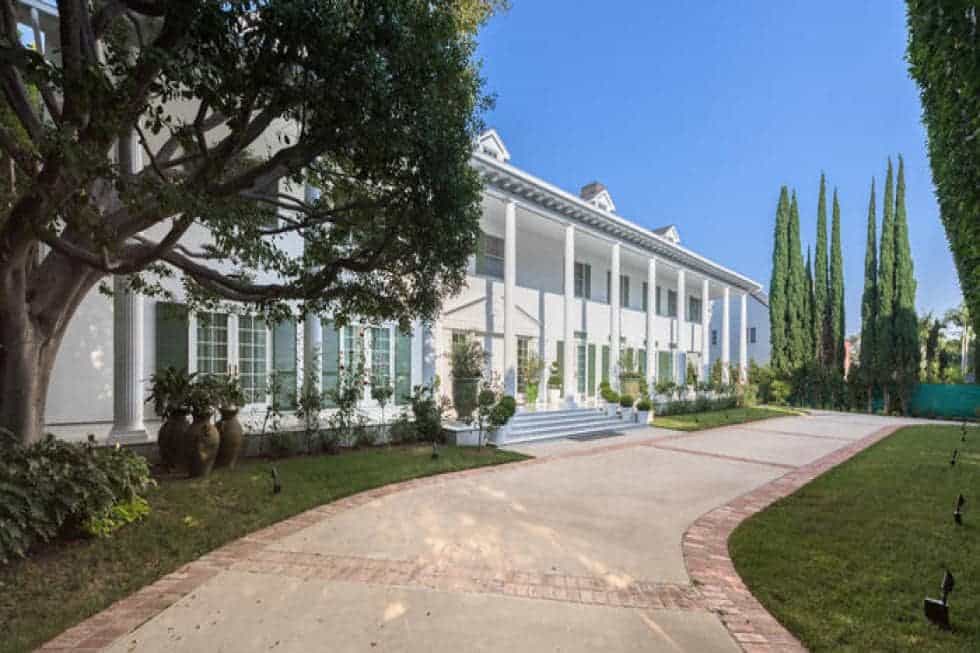 A Beverly Hills mansion once owned by former President Donald Trump is on the market for $29.995 million.  (He still owns the property right next door).  The lots are located in the 800 block of the iconic Rodeo Drive.

Trump sold the recently-listed home in 2009 for $12 million.  The current owner did some renovating and updating and put it on the market again.

The grounds take up almost three-quarters of an acre.  Modeled after the Greek Revival architectural style, the mansion covers two floors and measures an impressive 14,991 square feet.  The exterior columns give the home an opulent appearance befitting a President.  Step inside and you’ll find yourself in a huge white Thassos marble foyer.  An Italian crystal chandelier hangs from the high ceiling.  Immediately off the foyer are a reception room and formal dining room.

A marble staircase leads to the second-level bedrooms and other living areas.  However, the home also has elevator access.

Constructed in the 1980s, the mansion offers ample accommodations for formal gatherings, as well as family living areas for more casual or intimate get-togethers.  Additionally, there are 11 large bedrooms, 12 full baths, and a partial bathroom.  Some of the baths are decked out in Brazilian Azul Bahia granite, and nearly all have skylights.

The primary suite is large enough to include a fireplace, walk-in closet, and sitting area, with plenty of floor space to spare.

The kitchen provides lots of room for meal-prep and casual dining.  Its marble island could also serve as a dining table.  Across the room is a matching breakfast bar illuminated by spherical pendant lights.  An adjoining spice kitchen can be used for food prep, too.

When the current owner purchased the home, he rebuilt most of it and added about 5,000 square feet of living space.  The only room that harkens back to Trumpian days is the den.  Although it’s been refurbished, the original wood paneling remains.  It also has HVAC and exhaust systems separate from the rest of the home so guests may partake in cigars while allowing the rest of the rooms to be smoke-free zones.

One amenity a lot of people really like is the cedar-lined sauna.  It’s just off the backyard.

This place is ideal for entertaining.  An advanced sound system covers the whole property.  And there are plenty of outdoor amenities to enjoy.  At the back of the house, a Carrara marble patio leads to a swimming pool, complete with a fountain and waterfall.  The sprawling yard features a regulation-size basketball/tennis court.  All these outdoor additions were installed by the current owner.

Donald John Trump, also known as the 45th President of the United States, was involved in his father’s real estate business before turning to politics.  What many don’t know is that he had a stake in other ventures, too — furniture, clothing lines, and food.  He also starred in the reality series, The Apprentice beginning in 2004.  He had spoken publicly about running for president since the 1980s.