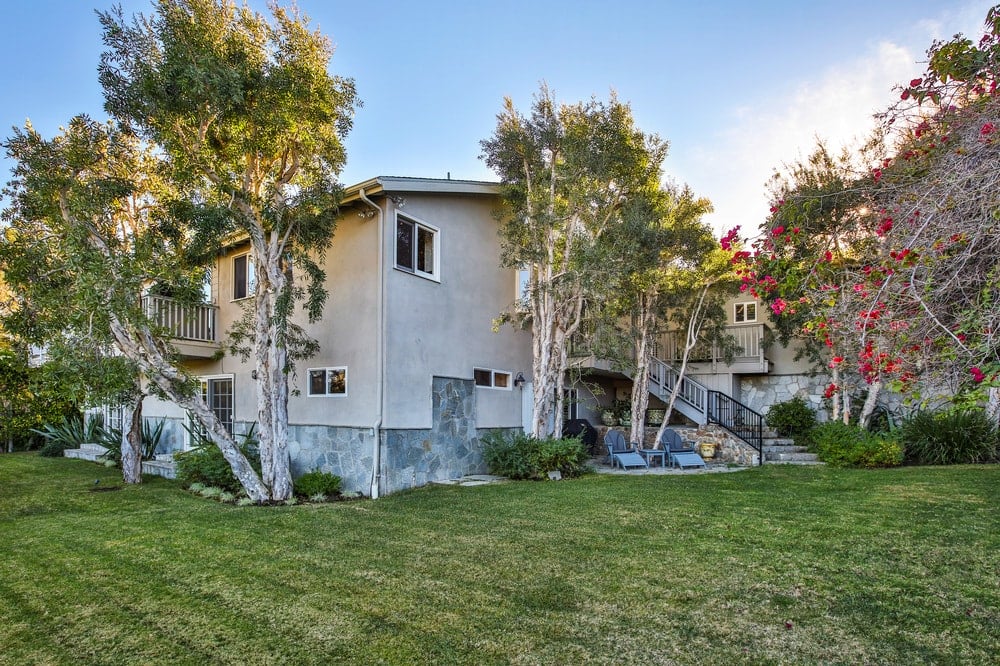 Don Rickles was the King of Insult Comedy, but no one would be offended by the beauty of his Malibu beach house. Located in prestigious Point Dume, it boasts a stylish natural look with exclusive beach access and ocean and mountains views. It's on the market for $7.995 million.

He was known as “Mr. Warmth.” From the time he burst on the scene insulting Frank Sinatra in a 1950’s night club act (“Make yourself comfortable, Frank. Hit somebody.”) until he passed away in 2017 at the age of 90, Don Rickles antagonized and delighted audiences everywhere. Well into the era of political correctness, he was slinging his barbs at fat people, women, famous stars and ethnic groups.

Now his Malibu beach home is up for sale at $7.995 million. It’s a 3421 square foot getaway with four bedrooms and five baths. The home rests on a one acre tropically landscaped lot with views of water, treetops and mountains.

If you’re looking for the residue of those classic Rickles insults bouncing about the interior of this home, you may be disappointed. The comedian kept at his craft, working TV shows and night clubs right up until his final years. As a result he could spare little time to enjoy his Malibu retreat. He put the property on the market shortly before he passed away.

The neighborhood is a special one. Point Dume sits on a promontory at the end of Santa Monica Bay, and has for decades been home to the Hollywood elite. Rickles’ friend Johnny Carson was only one of the celebrities who have lived there. It’s been home to Cher, Julie Answers and Dick Clark. All the residents enjoy the use of a gated private beach; you can’t get in unless you live there and have a key.

The Rickles property is built in a harmony with its surroundings. The hardwood floors have natural look wide planks, and there are plenty of generous windows to bring the best of the Southern California outdoors inside.

The living room features a fireplace to cozy up to at night. In the daytime, though, the log coffee table and the many windows let you feel you’re practically outside in the natural world.

The furnishing of the interior is a lot more tasteful than Mr. Warmth’s comedy was. The dining room and the kitchen are classic, comfortable and elegant without showing off. Natural wood, along with beiges and whites and soft blues, dominates throughout the home.

Outside, there are inviting walkways with trees, tropical plants and a lush lawn that beckons you to set up a game of croquet or bocce. There’s a tennis court and a swimming pool, with a small round Jacuzzi-style pool. The pools are surrounded by patterned terracotta brickwork. The patio terrace features a grill where you can admire the scenery while you flip your steaks.

There’s a walkway to the main entrance that passes an inviting natural space with a shared seating area and trees and shrubs elevated behind a circular brick wall. Wooden double doors with glass panels open into a foyer, With its tall ceiling, wide-planked floor and restrained decorative lighting, it previews the atmosphere that pervades the dwelling.

Perhaps the most pleasing feature of the home is the extensive porch, which along its length offers views of both mountains and oceans. It’s furnished with wicker rockers and a wicker dining set that matches the ambiance of the trees and landscaping on and near the property.