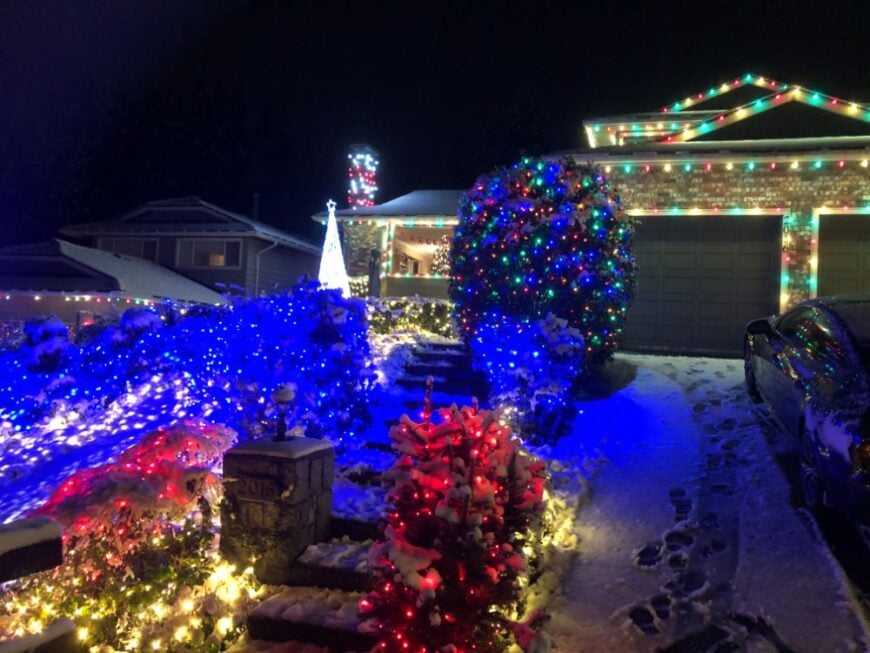 Up until last year, I spent one to two full days hanging Christmas lights.  I then spent another full day in January taking them down.  I had beome somewhat of a Christmas light expert over the years and became familiar with the many types of Christmas lights.

Some years I did all this in the cold rain. It was miserable work.

I did it because most of the houses on our street put up impressive displays.  We didn’t want to be the house that put in a lousy effort.  We wanted to be team players.

By impressive displays, I’m talking about traffic-attracting displays.  Word was out that our street was worth a look so throughout December we had regular Christmas Lights lookers driving down our street.  That made it worth it.

Last year (2020) many of the lights I had bought initially weren’t working.  I was faced with spending at least another $1,000 on subpar retail lights and putting them up myself or using that budget toward a Christmas light service.

I’m very grateful that last year I opted to hire a Christmas tree hanging service.  It wasn’t cheap.  It was a little nerve-wracking scheduling it since I called in late November… I wasn’t sure they’d get our house done in time (they did) but it was totally worth it.

This year we used the same service.  Because we’re now past clients, we could choose when they came well in advance so as of this article, our lights are on our house ready for display.  It’s a bit early so we just keep them off but we are ready to light up the street.

Table of Contents Show
Update 2022: We moved houses in 2022 and hired the same service. Here’s our new house all lit up for 2022:
1. Hire a service as early in the year as you can
2. Hire carefully – review their portfolios
3. If approaching the season when you start the hiring process ask if they can fit you in at a time that works for you
4. Ask for multiple quotes (although the cheapest quote isn’t necessarily the best option)
5. Ask if they will replace any lights that go out during the season (this is important)
6. Go with their lights which are superior in every way
7. Buy vs rent… best to buy the lights if you’re in it for the long run
8. You might end up having to store the lights at your place
9. It costs more than you expect… our budget tripled very fast
10. They’ll do those hard-to-reach places (so you don’t kill yourself)
11. A crew of two or three can hang a lot of lights in one day
12. Add your own if you feel like it
13. It’s totally, 100% worth every nickel 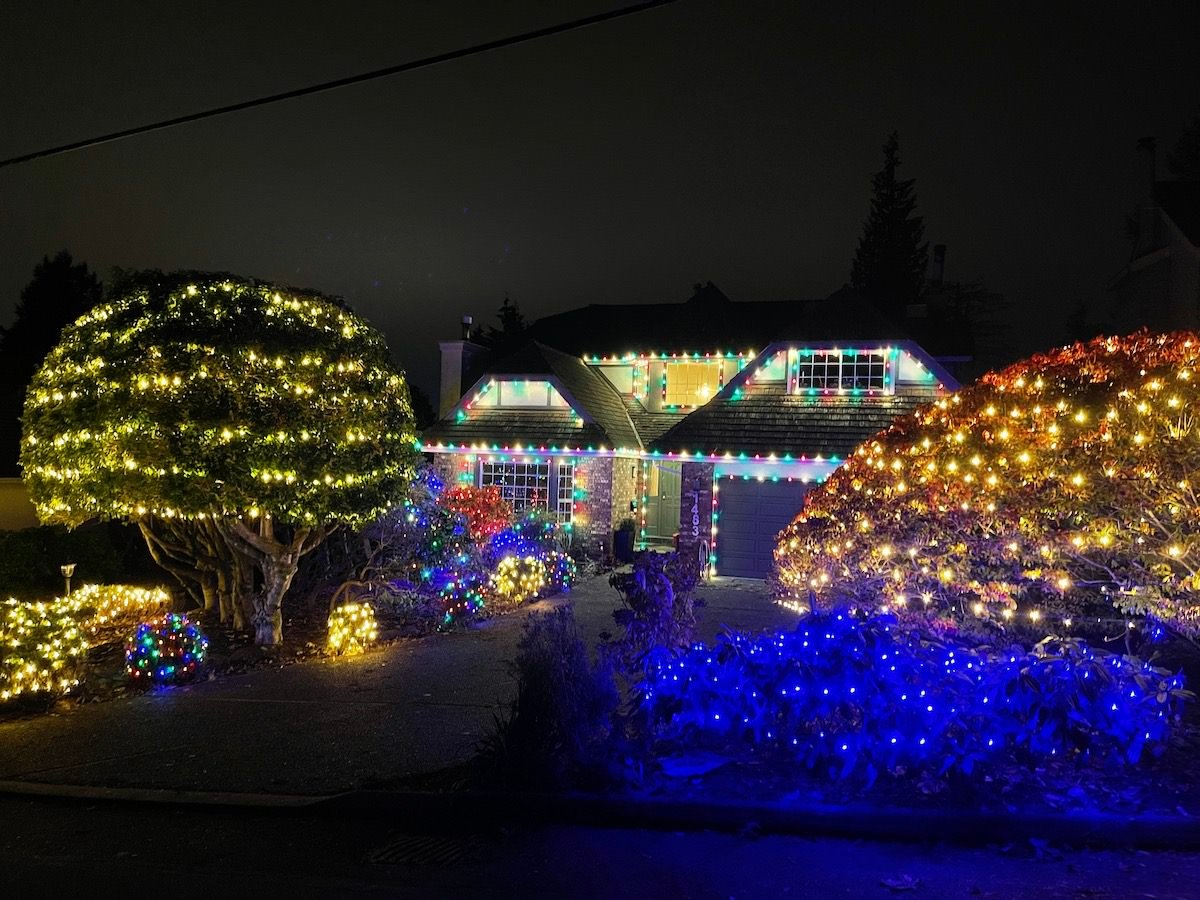 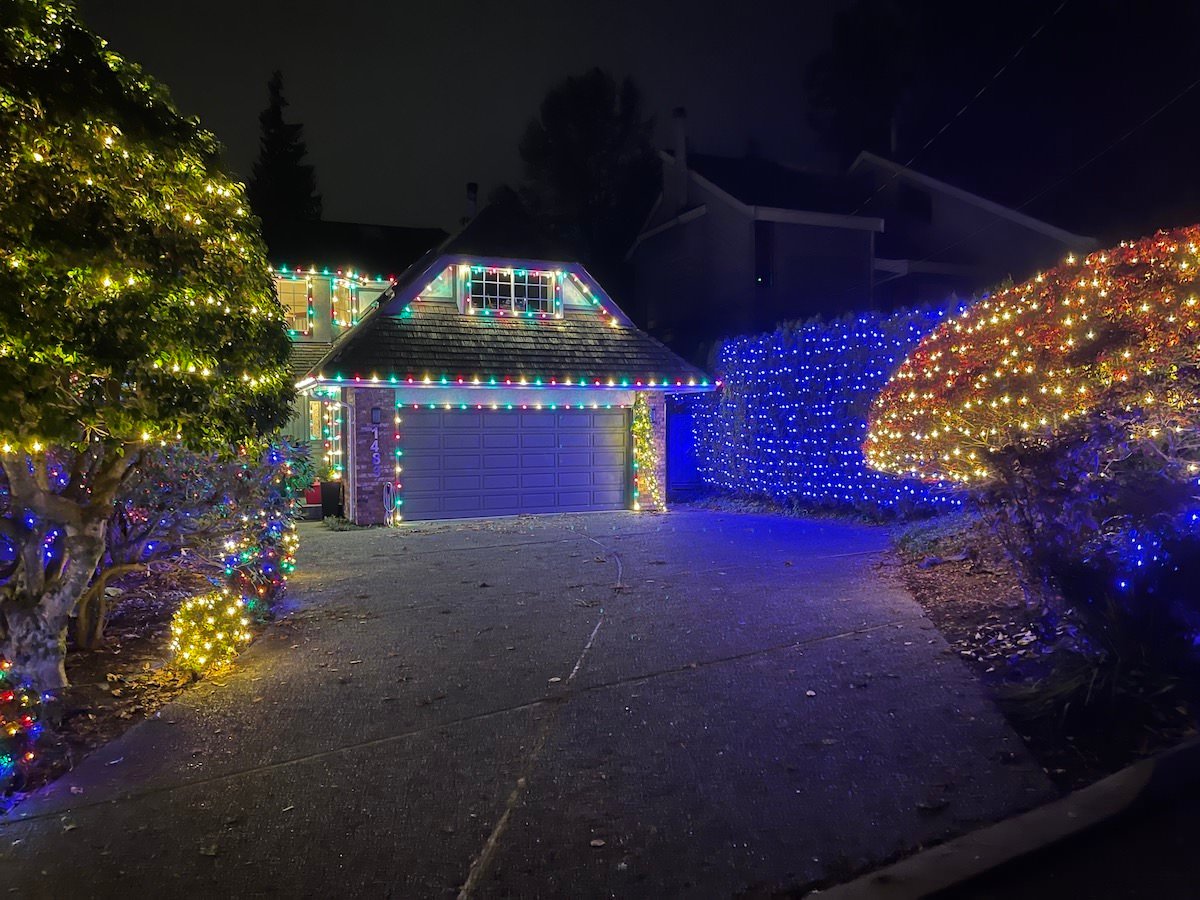 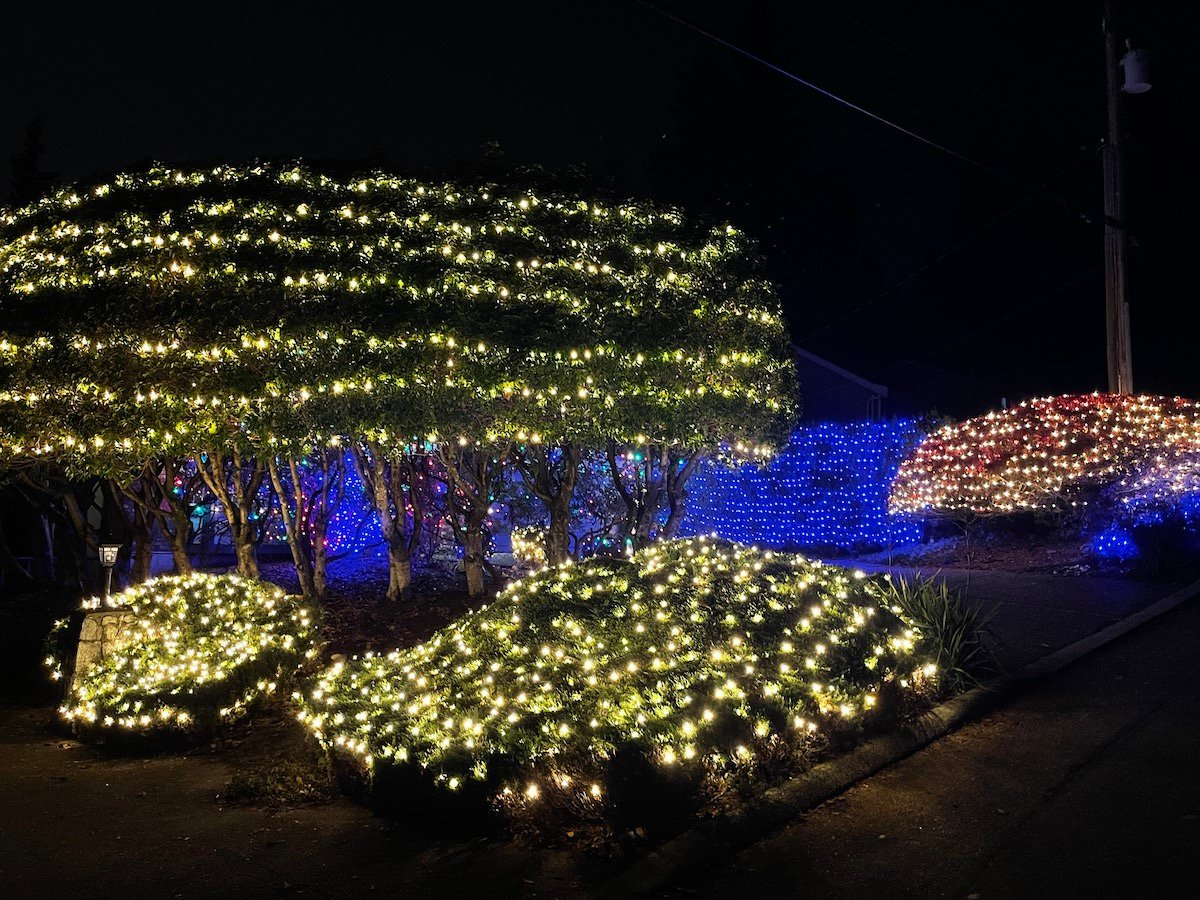 1. Hire a service as early in the year as you can

Don’t wait until December.  In fact, November can be too late as well.

Our first year using a service, I didn’t get the ball rolling until mid-November. That was way too late.  By that point, most services have their schedule pretty much jam-packed with existing clients.  Fortunately, I found a great service that could fit us in (probably because I had a huge budget) but seriously get on this project at the end of summer or even earlier.  The sooner, the better.

More and more folks, at least in our area, are using these services so the demand is high.  There are only so many services available so get on it ASAP.

Now that we’re existing clients, I schedule the week for the following year pretty much as soon as the service takes the lights down in January.  That way I know we’re all set and I don’t have to worry about it.

Often I don’t do due diligence when hiring services but in this case I did.  I reviewed 5 services in our area.  I reviewed their portfolios.  I contacted all of them. My opening contact email included the following:

What was interesting was the differences in replies from the several services.  The service I ultimately hired was awesome.   They called the same day.  They had already checked our house out on Google.  They explained their pricing which was a little confusing at first but I quickly figured it out.

Other services took days to get back to me.  The customer service was terrible.  It was a no-brainer for me who to hire even though they weren’t the cheapest.

I have to say I got lucky.  Not that they are in your area, but I have to give them a shout-out.  It’s Lumineer Light Installations which serves the greater Vancouver, BC area.

3. If approaching the season when you start the hiring process ask if they can fit you in at a time that works for you

If you’re going to spend several hundred or thousands on lights, there’s no point in not getting them installed until Dec. 20.  This was my main concern when I started reaching out to services last year in mid-November.  Fortunately, I found a great service that could fit us in early in December. Had that not been possible, I wouldn’t have bothered.

Be sure to ask upfront when they can get to you.  The last thing you want is to pay the deposit or sign a contract and then learn they can’t get to your house until just before Christmas.

4. Ask for multiple quotes (although the cheapest quote isn’t necessarily the best option)

While it took days for some services to get back to me, I did receive multiple cost quotes.  Most were pretty similar so I went with the outfit that provided the best customer service to that point.

5. Ask if they will replace any lights that go out during the season (this is important)

Most services offer this but you want to ensure that if any strands or lights go out during the season that they will send somebody out to fix or replace those lights.  Our service offers this.  It wasn’t necessary so far but it could happen.

Every service operates a little differently but generally speaking because these services customize the lights for your house you end up renting or buying the lights.  Renting is cheaper up front but buying is cheaper in the long run.

We chose to buy the lights.  It was costly in year one but now that we’ve paid for the lights and they are all cut to size, we need only pay for the service’s time/labor for installation.  To give you an idea how much cheaper it was the second year, here’s what we paid.  Keep in mind that we put up a ton of lights… most installations won’t cost anywhere near this much:

Both years we had the exact same number of lights and configurations.

That said, if you’re not getting too much done, you might be able to use a non-customized option.  This is something to discuss with each service.

6. Go with their lights which are superior in every way 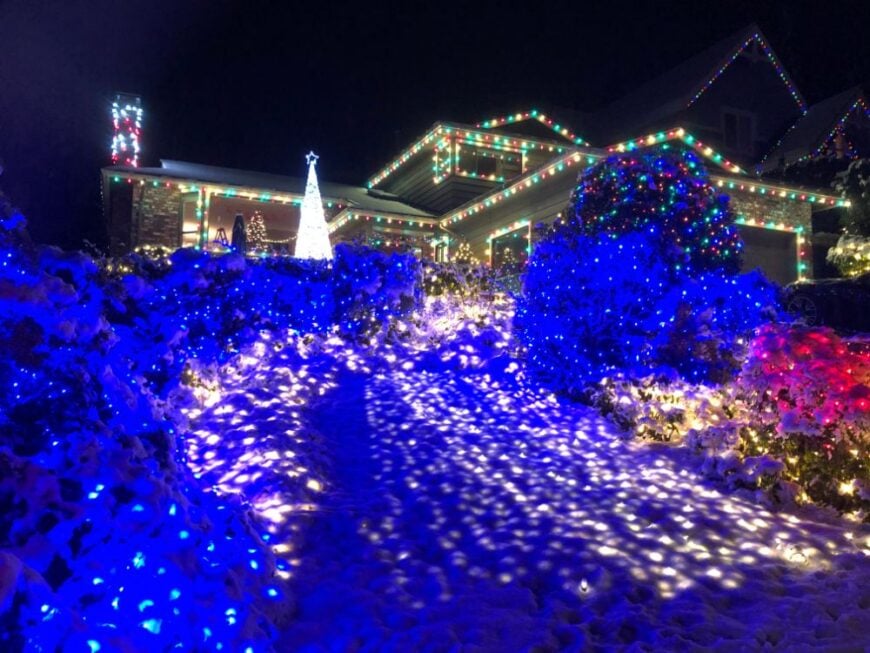 This is the Christmas light display on our house in 2020 by a professional Christmas light hanging service. We added some of our own such as the cone and the lights on the ground.

When I was discussing budget and our needs with the service last year, I kept pushing that the service use the lights I had in order to save money.  Moreover, I had already spent several thousand on lights and so not using them didn’t sit well with me.

I didn’t understand all that until I saw the result of them using their lights. I ultimately relented and agreed that they use their lights (which we purchased on a per-strand basis).  Once I saw how they cut and spliced everything so nice and tidy, I realized it was no comparison. Their lights were superior in every way.

7. Buy vs rent… best to buy the lights if you’re in it for the long run

We bought the lights and I’m glad we did (even though I expect to move before next year and so our custom cut lights won’t work… meaning we’ll have to buy again).  This year the cost was very low.

If you plan to stay in your house for a few years and plan to put lights up every year, buying the lights is the most economical option.

8. You might end up having to store the lights at your place

We store the lights.  When they take them down, they organize them in large rubber tubs that they leave with us. We just put them in the crawl space ready for use the next year.

However, other services might take them away… I suspect every service is different.

9. It costs more than you expect… our budget tripled very fast

As I worked with the service to put together a full property light display, our budget skyrocketed pretty fast.  Initially, I expected it to cost $4K.  When the smoke cleared we spent over $9K.  I was okay with that because I kept adding lights and the end result was spectacular.

No extension cords littered all over the property (it’s awesome)

This is one of the huge perks of using a service.  They cut the strands and splice them and staple all the cords to the house so that they all connect without any extension cords littering the property.  They conceal all the tree/bush lights as well.  It’s almost impossible to see the cords.

We have thousands of lights all over the house and gardens… and end up using only one outlet.  They feed everything into one outlet which is a feat unto itself.  This way we just set up one timer and we’re good to go.

10. They’ll do those hard-to-reach places (so you don’t kill yourself)

When I put up the lights, I just did the lower part of the roof.  The upper was too high. The chimney unthinkable.

But services have long ladders and are experienced going where I have no business going.  They put lights on every roof area as well do a “candy cane” wrap around the chimney.  It’s amazing.

11. A crew of two or three can hang a lot of lights in one day

These folks know what they’re doing. In year one, they completed our house in 1.5 days.  This included having to custom cut the strands and planning it out.

My kids like putting up SOME lights so we just added some of our fun light decorations when the service was done.  We had a tall cone and some branch-style lights we put in the front yard.  Kids love doing this but not for all that long… so it was a great way for them to contribute to the decorations without having to spend a day in the rain doing the heavy lifting.

Christmas is a busy season.  The lights they sell at retail stores and hardware stores are junk which I didn’t realize until we ended up with the commercial-grade lights.  There is no way I could put up lights in such a clean way as a service.  Best of all, my only involvement is scheduling a day and paying the bill.  They put them up. They take them down. It’s hassle-free which makes it worth the money.