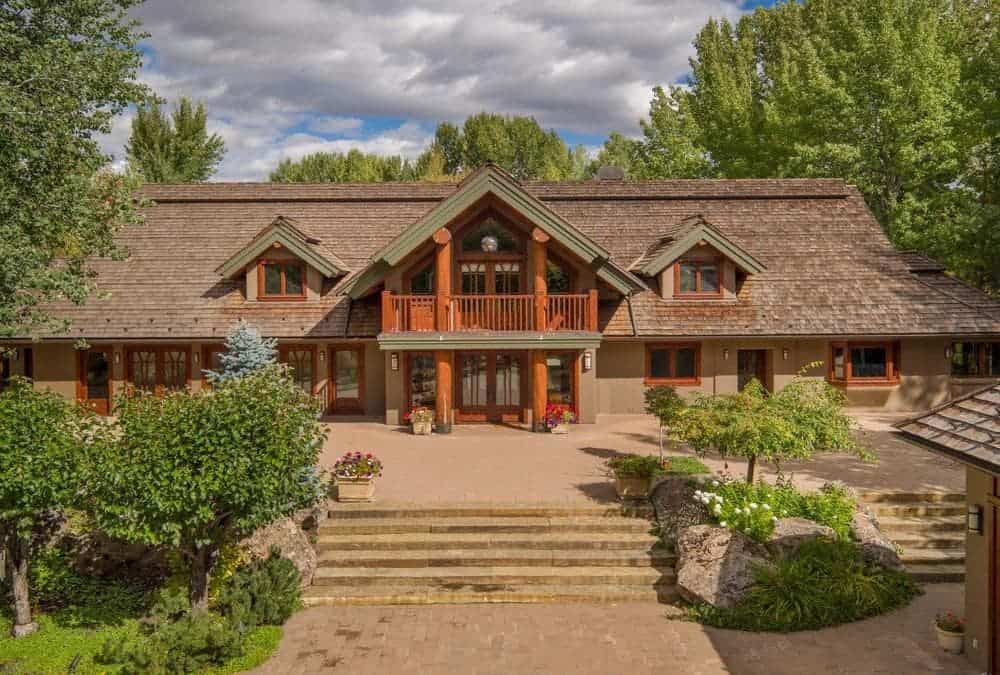 Bruce Willis is probably best known for his role in the Christmas action classic, Die Hard- a movie so satisfying to watch that the sequels seem to have made themselves. Of course, he’s also been in many financially successful and critically acclaimed films such as the iconic Pulp Fiction and Unbreakable. 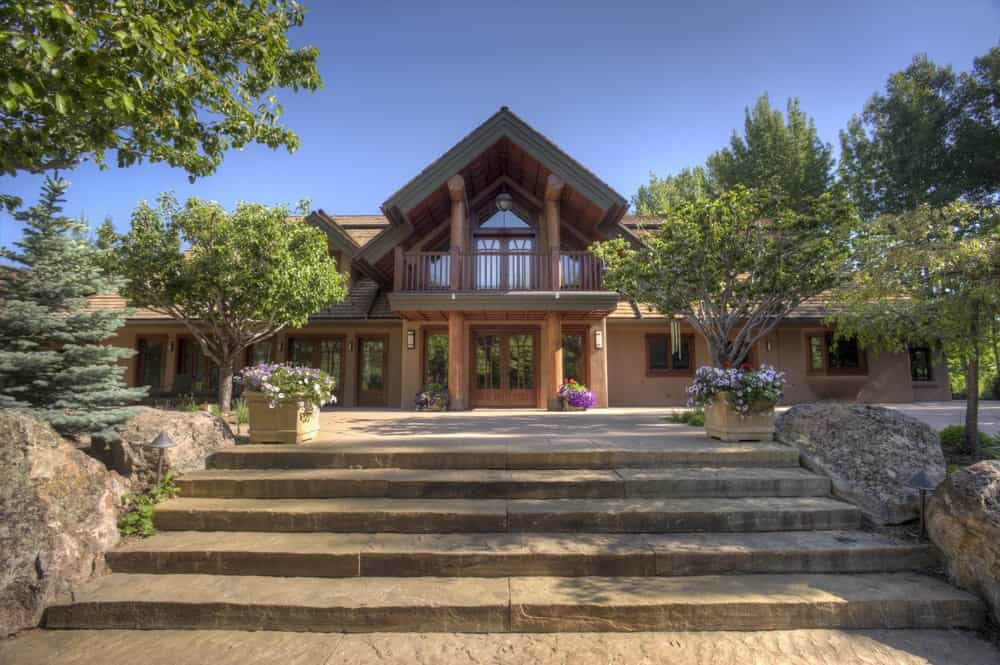 The front view of the house shows the complement of the large glass windows and doors to the wooden elements of the house that pairs well with the earthy concrete walkways. Images courtesy of Toptenrealestatedeals.com. 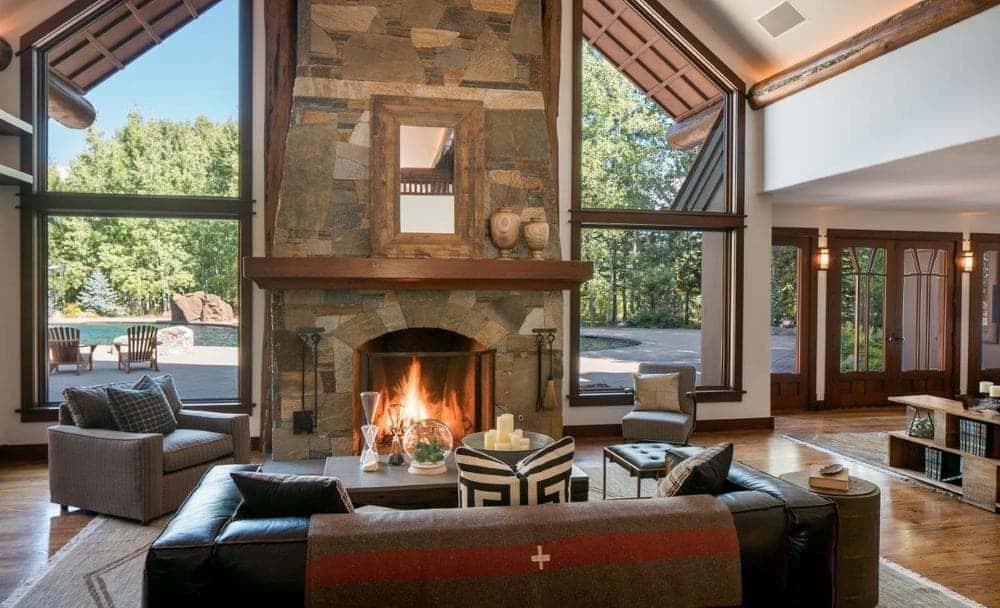 This charming and homey living room is dominated by the large stone structure that houses the large fireplace across from the comfortable black leather sofa. Images courtesy of Toptenrealestatedeals.com. 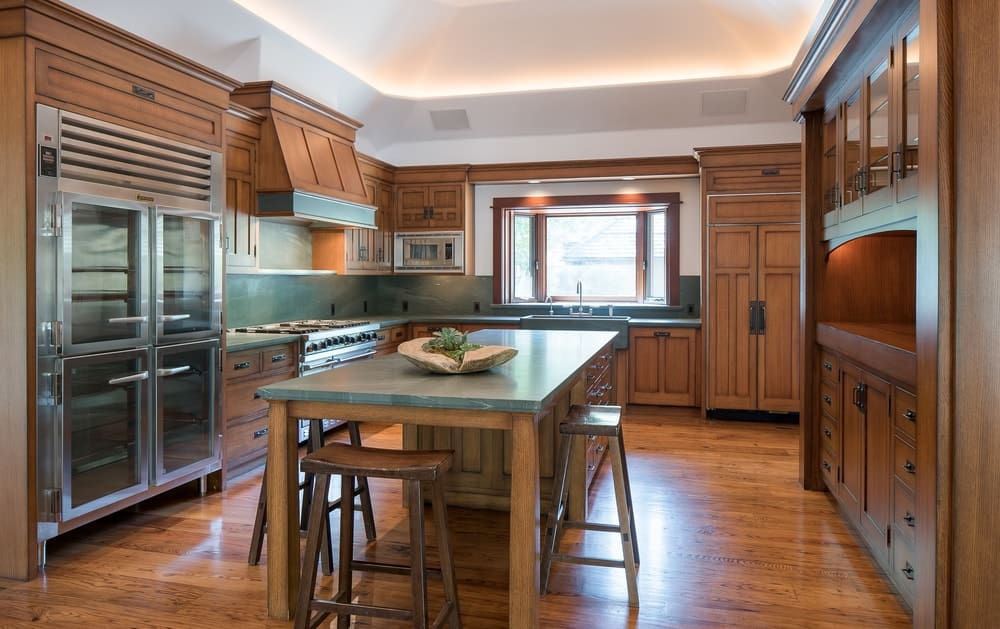 The wooden cabinetry of the walls in the kitchen matches perfectly with the hardwood flooring with a wooden table in the middle serving as a kitchen island. Images courtesy of Toptenrealestatedeals.com. 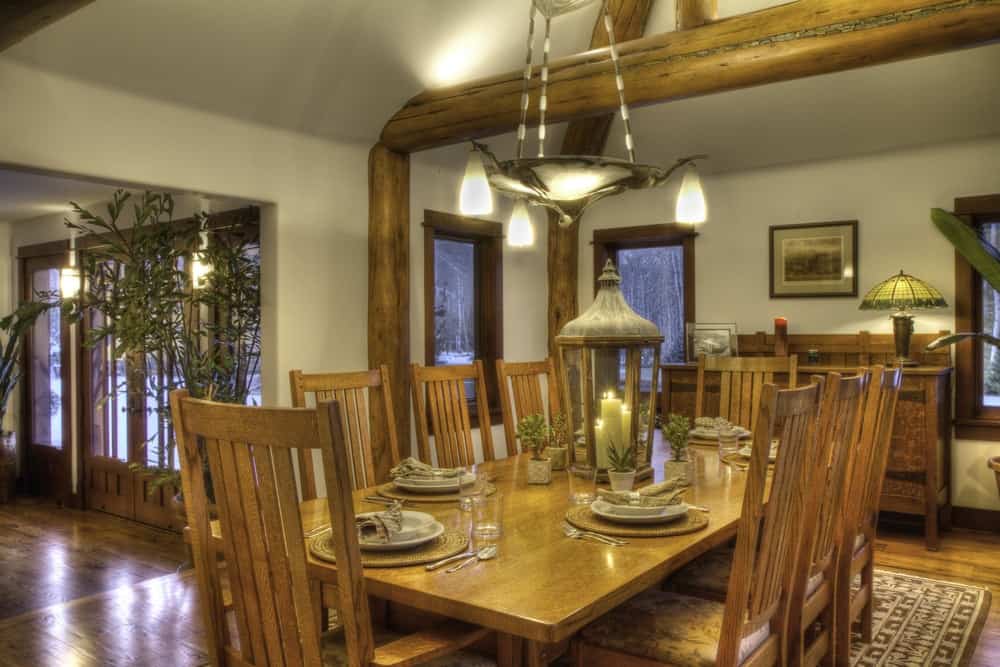 This charming dining area has an intimate and homey feel to its wooden dining table surrounded by matching chairs and topped with a simple chandelier. Images courtesy of Toptenrealestatedeals.com. 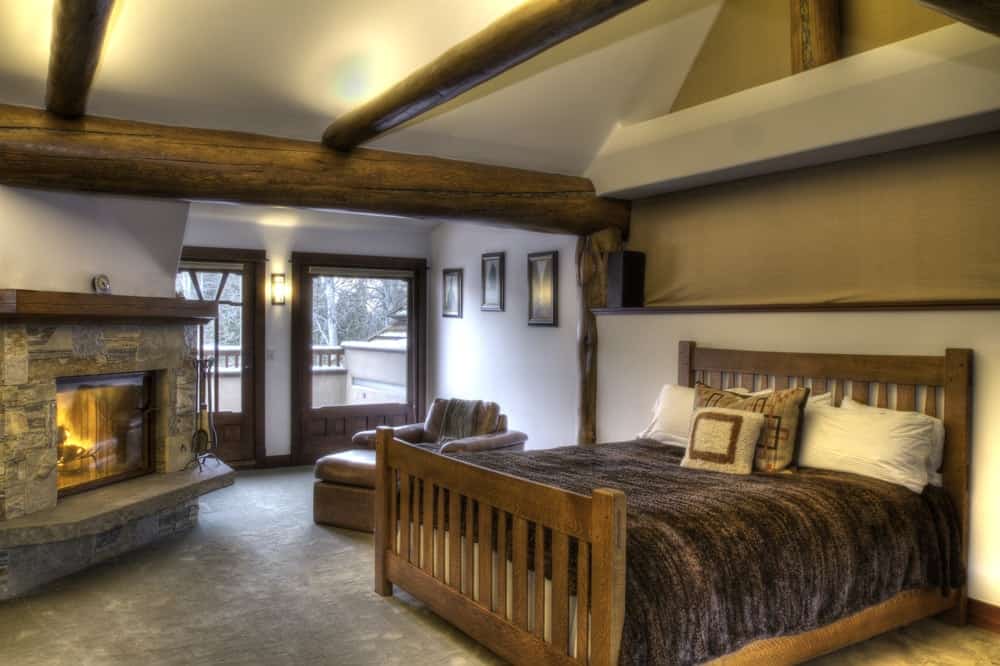 The bedroom’s wooden sleigh bed is a perfect match for the wooden exposed beams of the ceiling and the wooden frames of the windows and doors that complement the beige walls and ceiling. Images courtesy of Toptenrealestatedeals.com. 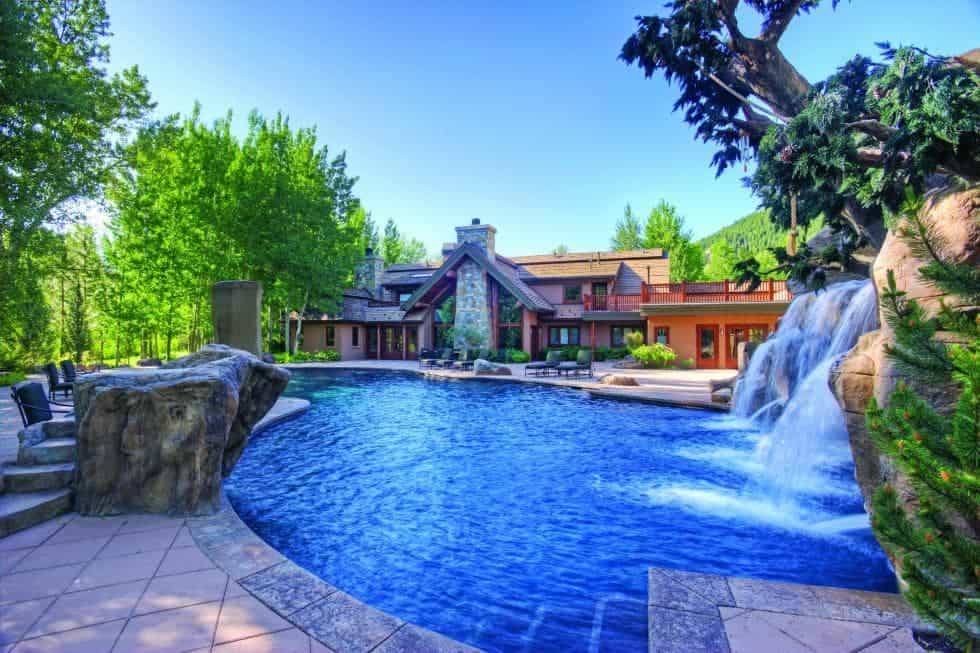 From this vantage point of the back of the house, you can see the beautiful stone and wood structures of the house at the other side of the large pool of the backyard. Images courtesy of Toptenrealestatedeals.com. 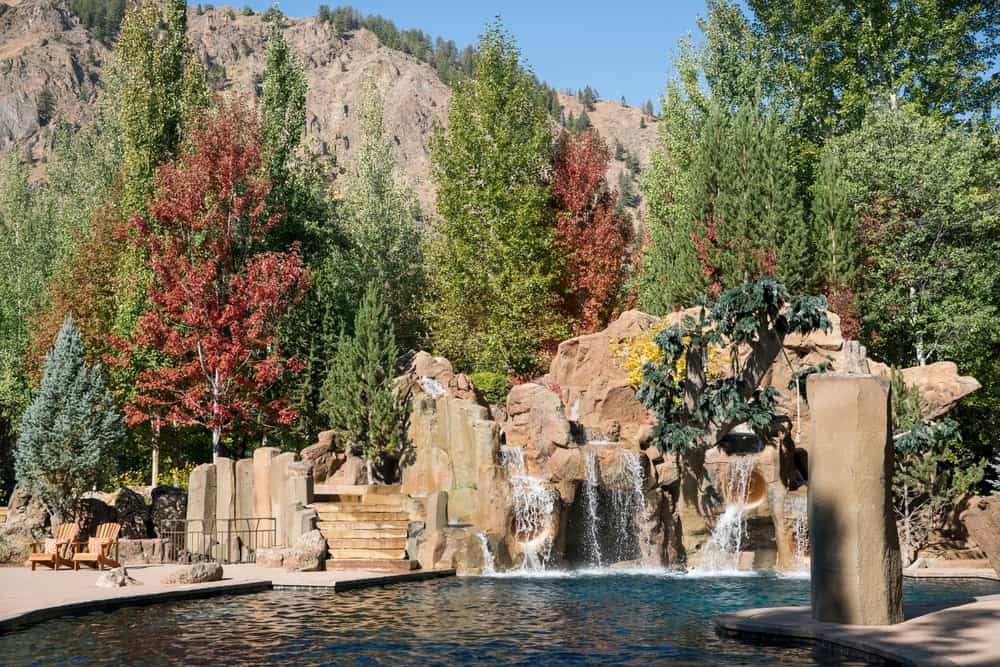 The large pool at the back of the house is complemented by the huge decorative rocky structure at the edge with natural-looking falls and tall trees in the background. Images courtesy of Toptenrealestatedeals.com. 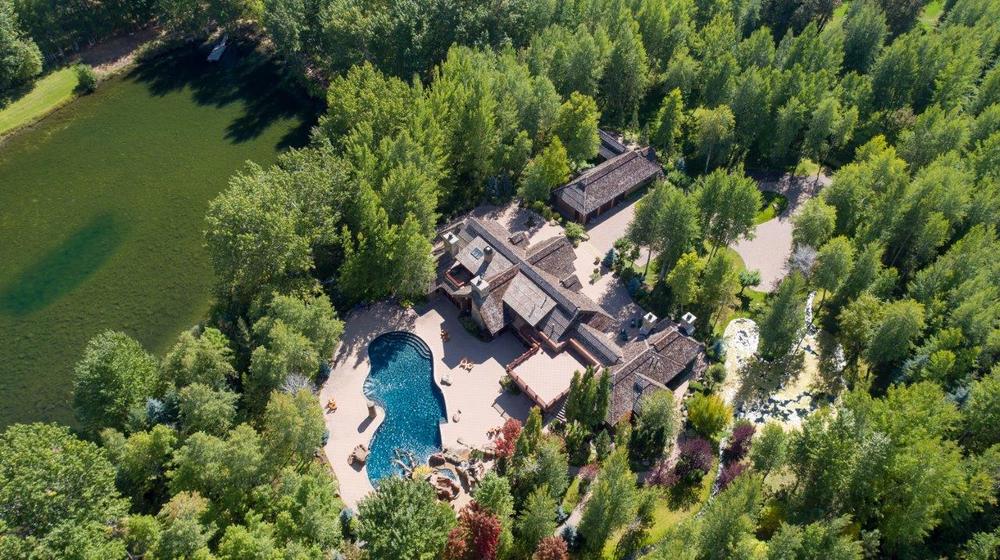 This aerial view of the house shows its isolation with the surrounding tall pine trees that complement the earthy tones of the roof as well as the walkways. Images courtesy of Toptenrealestatedeals.com.

Well, the action star’s action star has owned a ski home in Sun Valley since 2003, and he had been trying to sell it since 2011. The home finally sold in 2018, and Willis is still wiping his brow over it. The final selling price came in at $5.5 million, which is quite a markdown from the original asking price of $15 million.

The property is a 20-acre lot and the home covers 8,404 square feet. It offers soaring views of Flying Heart Lake and the surrounding mountains. It is surrounded in thick woods and has six bedrooms and seven bathrooms. Outdoors, there’s a huge swimming pool and hot tub.

Coming up the front step, the house is as impressive as some of the nearby mountains with its steep front steps and the centerline facade with its high a-frame ceiling, big windows and inviting double front doors.

Inside the living room, there are vaulted ceilings, high windows running from the floor to the apex of the a-frame, and a very large fireplace that is as tall as the house itself.

Every interior space is heavy on dark wood and stone texture. The dining room is very down to Earth with all wooden furnishings and a connected ceiling beam and load bearing beams down the centerline.

The kitchen is perhaps the most wood-heavy room in the house with hardwood floors, stained oaken cabinets and a marble-topped wooden table in the center. The kitchen is noticeably more shiny than the other rooms. This is always a smart touch in interior design as shiny things tend to connote cleanliness.

The primary bedroom features heavy load bearing beams along the ceiling and walls, denoting strength. The bed is massive, and two adjoining doors lead out to the pool area which is absolutely epic, to say the least.

The listing calls it an Olympic sized pool, but it is not the standard rectangular Olympic shape – and it might actually be larger than an official Olympic pool. A mighty waterfall pours in from one side, helping to keep the pool water fresh, and rock-like features make the area feel almost as rustic as a hidden swimming hole in the woods.

We don’t know why Willis was so eager to get rid of the property, but we’re sure the new owners are ecstatic over the nearly $10 million dollar discount they got on it!