This home is modeled after a fine Italian Villa and is sitted on the olive tree-lined private drive. Boasting a Tuscan-style architecture with a 17,100 square foot property, the mansion features 7 bedrooms, 13 bathrooms and a two-storey guest house. 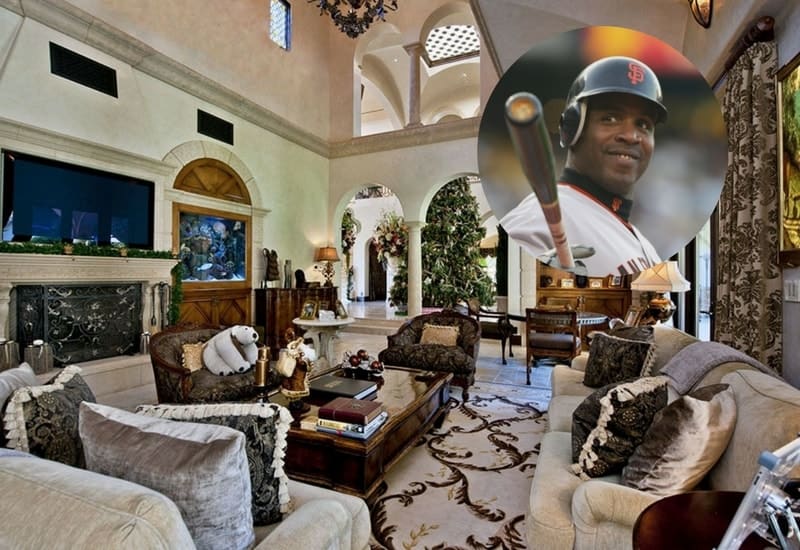 Barry Bonds was a professional baseball left fielder who played for 22 seasons in Major League Baseball and is considered as one of the greatest baseball players of all time.

Bonds was drafted by the Pittsburgh Pirates as the 6th overall pick of the 1985 MLB draft. Upon making it to the MLB, Bonds quickly made it to stardom, leading the National League rookies with 16 home runs, 48 RBI, 36 stolen bases and 65 walks. After his stint with the Pirates, Bonds signed a lucrative contract worth of a then-record $43.75 million ($74.1 million today) with the San Francisco Giants. Upon joining the Giants in 1993, Bonds prove that he’s worth the prestigious contract by breaking records in MLB. In 2001, he set a single season record with 73 home runs, bagging the Babe Ruth Home Run Award and lead the league in home runs.

He was named Baseball America All-Star 7 times, 14 time MLB All-Star, multiple MVP awardee, held the Major League career records in home runs with 762 and acquired many more accomplishments and awards such as setting an all-time mark with his 2,558 walks, leading his team to the World Series in 2002 and finished with eight Gold Glove Awards.

But his legacy was tainted by allegations of him using performance-enhancing drugs. Additionally, he was charged with perjury and obstruction of justice for his earlier grand jury testimony. Despite denying the allegations and pleading not guilty, no teams were willing to sign Bonds, forcing him to end his legendary yet confidential career.

The home is modeled after a fine Italian Villa and is sitted on the olive tree-lined private drive. Boasting a Tuscan-style architecture with a 17,100 square foot property, the mansion features 7 bedrooms, 13 bathrooms and a two-storey guest house.

The mansion features grand living spaces with high ceilings added by special details such as Italian floors and hand-painted murals. The gourmet kitchen connects to the dining room while the home theater boasts a large seating space that can accomodate 12 persons. Additional entertaining rooms such as a walnut-paneled home office and a steam room with jacuzzi and body theraphy rooms also exist in the house.

Outdoor space provides a good quality experience with its swimming pool with a cabana and multi-use sport. The outdoor kitchen features a pizza oven and a wet bar, along with a manicured lawn perfect for entertaining visitors.

Check out the full photo gallery below of Barry Bonds’ home.

CelebsNetWorthToday.com estimates his fortune at $80 million.