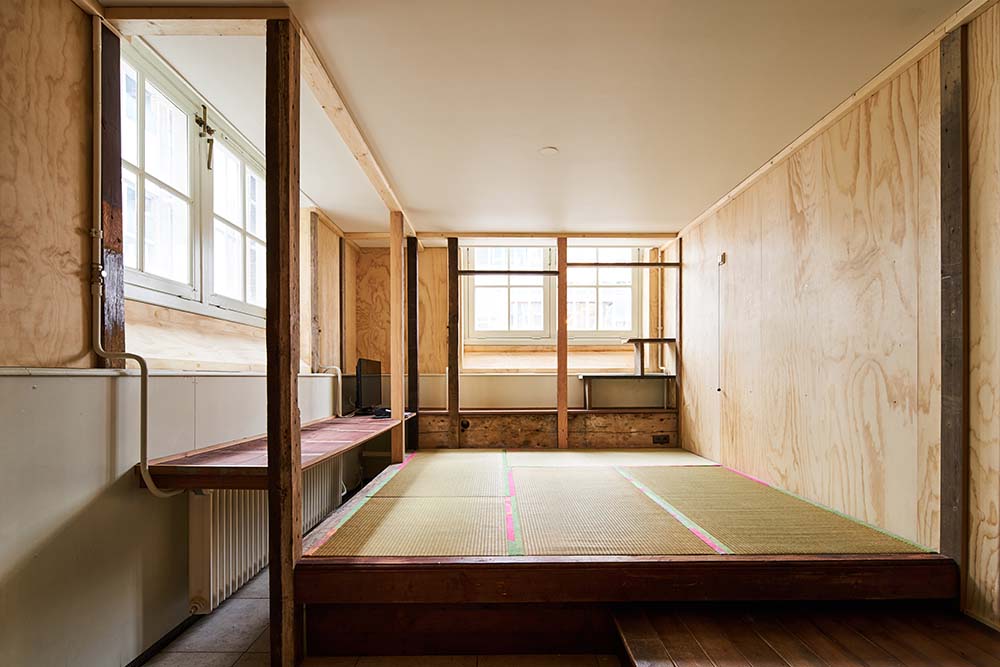 In 2016, Sano was designated as a cultural exchange Ambassador from the Agency for Cultural Affairs to be sent abroad for the agency’s cultural exchange program. As a concept, our firm began to design spaces for holding tea-ceremonies which would be created by local people, with local materials and cultural inspirations.

Located at the Lloyd Hotel in Amsterdam, our firm was tasked with designing and renovating the hotel’s guest room.

The original concept involved the idea of making an independent shed outside of the hotel. Suzanne Oxenaar, the artistic director, instead suggested renovating one of the guest rooms instead as it could be difficult to maintain the condition of the shed with the uneasy weather conditions and coastal location. The goal of the project eventually became the continual iteration of the hotel through different stages.

In the original guest room, every time the shower was used the room flooded between the entrance and the bed area. To prevent this, the shower was enclosed with a sliding door and the corridor was isolated with a Japanese-style alleyway. The bedroom was adjusted to about 9㎡ which is also the size of four and a half Japanese tatami pieces.

The number associated with the tatami mat was used to derive the name of the project. The display space (tokonoma) and small desk (shoin) provide an element of a Japanese tea-ceremony room.

Upon researching about local building materials in Amsterdam, old wood materials used for different buildings 200 – 300 years ago were found. Oak, pine, and teakwood beams, pillars, and flooring were brought into a workshop to be processed with both heavy machinery and Japanese hand tools.

The old nails were removed from the old piece of wood. After being cut and refurbished with an electric circular saw, the various pieces of the materials were placed back in. The new surfaces were finished with a Japanese hand-plane to embrace both old features with its original history and the newly created aesthetically. Tatami found in Amsterdam were refurbished in collaboration with local artists using the Lloyd Hotel original textiles as the trim of the mat.

Almost all of the materials used for the project were found and completed in Amsterdam. The majority of the work was undertaken by local artists, hotel staff, and the principal architect. The room is planned to be updated with each visit to Amsterdam, adding new pieces upon each occasion.

A Japanese tea-ceremony was held at the opening reception so guests could experience the Japanese tea tradition as a form of composite art. Yojo-Han serves as a venue created based on a combination of Japanese and Dutch design to hold a Dutch-style hospitality event in the future while learning about Japanese culture.