The bed, the embodiment of rest and relaxation plays such an important role in our lives as we spend about a third of our life in it. Beds today can be fine-tuned to fit any need we desire. Not too soft, not too firm, Tempurpedic, spring filled, or with the robotic ability to launch us out of bed if need be. But what did we do before modern beds? This desire for a comfortable place to rest at night has existed for as long as we have, but our standards for what constitutes comfort have certainly changed. Let’s discuss why beds were invented, and how the ways in which we sleep have evolved over time.

Before beds, early humans would simply sleep on the ground as far as we know. However, we eventually transitioned to the more comfortable option of sleeping on piles of vegetation and animal skins, sounds cozy. The oldest known mattress is dated 77,000 years old[3] and was discovered in South Africa. The mattress was made from vegetation formed into a matt that was an amazing “12-inches thick and a whopping 22 square feet, providing plenty of room for the entire family”[3]. Early humans were often nomadic, and therefore beds had to be formed wherever they ended up. Archaeologists have discovered these makeshift beds formed from shallow depressions in the earth filled with vegetation from about 8,000 B.C[3].

As humans began progressing from a nomadic to a settled lifestyle, more permanent furniture was produced to provide comfort in the home. One particular example of this was the invention of the raised bed by the Ancient Egyptians. The Egyptians are the first recorded peoples we know to have slept on raised beds. Common people at this time likely slept on floor mats, while the wealthy and royal slept on raised beds of gold, wood, or ebony. Atop these raised beds lived a mattress of cushions made from wool, as well as linen sheets[3]. The Egyptians however decided against pillows and preferred an unusual prop for the head and neck. These discomforting headrests had a shaft that protruded from the bed, with a curved neck rest, almost like a guitar mount. Many “historians speculate that the Egyptians used them to preserve their famously elaborate coiffures”[2], rather than pillows which would inevitably mess up their do’s. 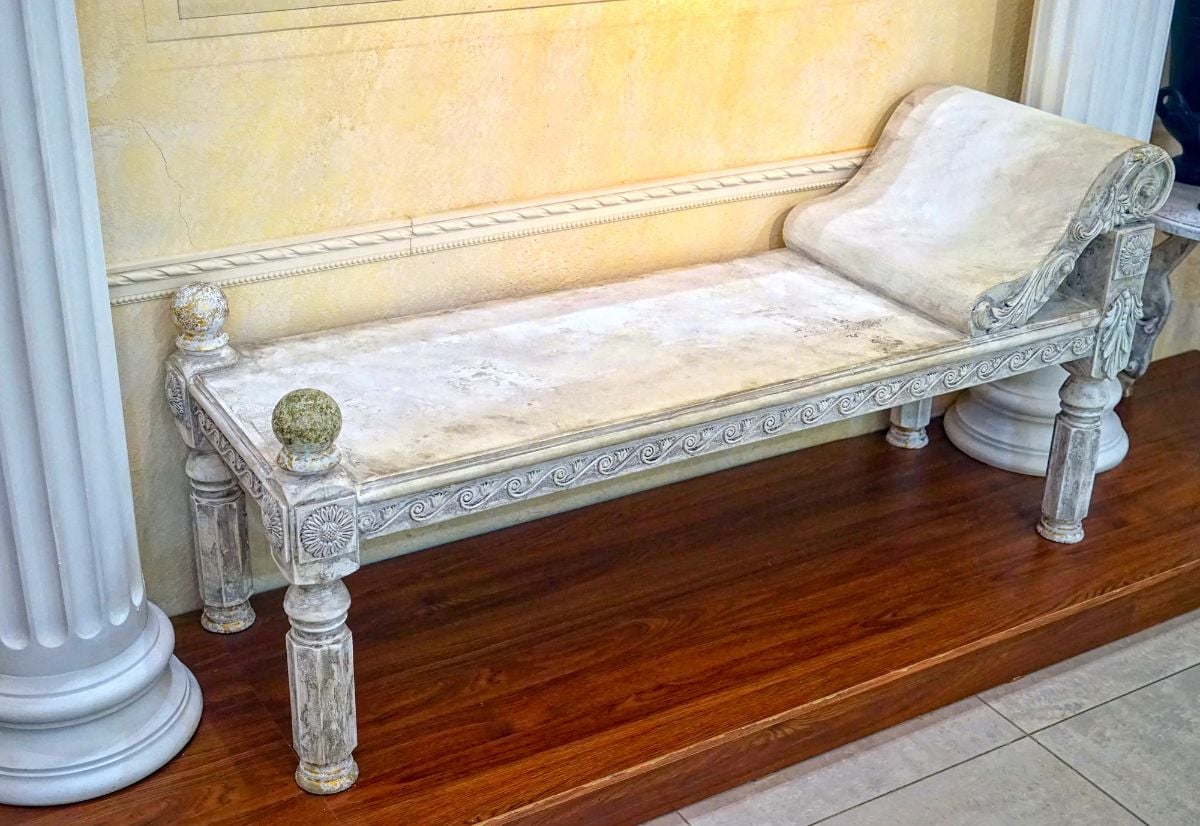 The Romans borrowed the raised beds design from the Egyptians “with the addition, in some cases, of paneling on three sides, which turned the bed into a sort of daybed”[2]. Roman daybeds were a cultural staple both in the home and in the public sphere as many of the activities of daily life, eating, reading, socializing, were enjoyed by the Romans in a prone position. The Roman bed was still a luxury item, and many commoners slept on the floor on hay-filled burlap sacks.

Why Was the Raised Bed Invented?

So why exactly was the raised bed invented? While sleeping on the floor did the trick for many centuries, as humans began to evolve to a settled lifestyle, our standards changed, and sleeping on the floor invited a number of creepy crawlers to cuddle in with you. Transitioning into villages and metropolises also increased the number of pests that would hang around to pick up the scraps of condensed human life. Therefore the raised bed for the Egyptians, in particular, was a simple way to avoid the snakes, mice, and insects that scurried on the ground as you slept. This avoidance of often disease-carrying animals on the ground was attractive to many as humans began to seek out a more sterilized lifestyle. 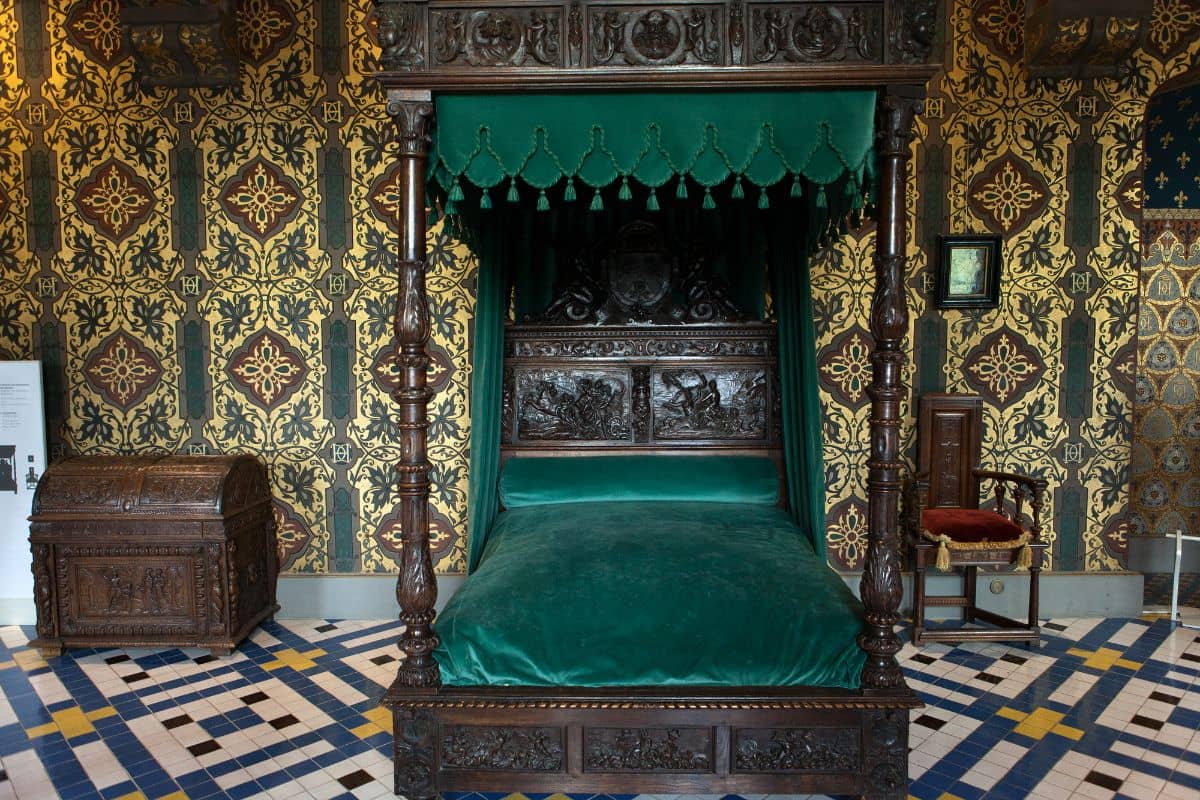 Evolution of the Bed

The nightmare-inducing beds of the past would begin to take a more familiar form in the Middle Ages, though they came with their own set of issues. The raised bed topped with a mattress was the standard, but beds increased immensely in size compared to Egyptian and Roman beds. Like many things in the Medieval period, the bed was a status symbol and indication of wealth, and therefore beds were made of opulently carved hardwoods, adorned with luxurious quilted duvets in exotic colors, bed skirts, and even canopies. Beds also thankfully included pillows instead of wooden and stone headrests. Beds at the time were some of the most expensive pieces of furniture one could get their hands on, or, heads on.

Beds during this period were much larger than what the norm is today. In fact, beds were made so large in order to accommodate entire families. While beds by today’s standards are a place for solitude and privacy, beds in the 15th and 16th centuries were essentially a sleeping dog pile for your entire family. In fact, it was unlikely to ever sleep in a bed alone unless you were on your death bed, both literally and figuratively. 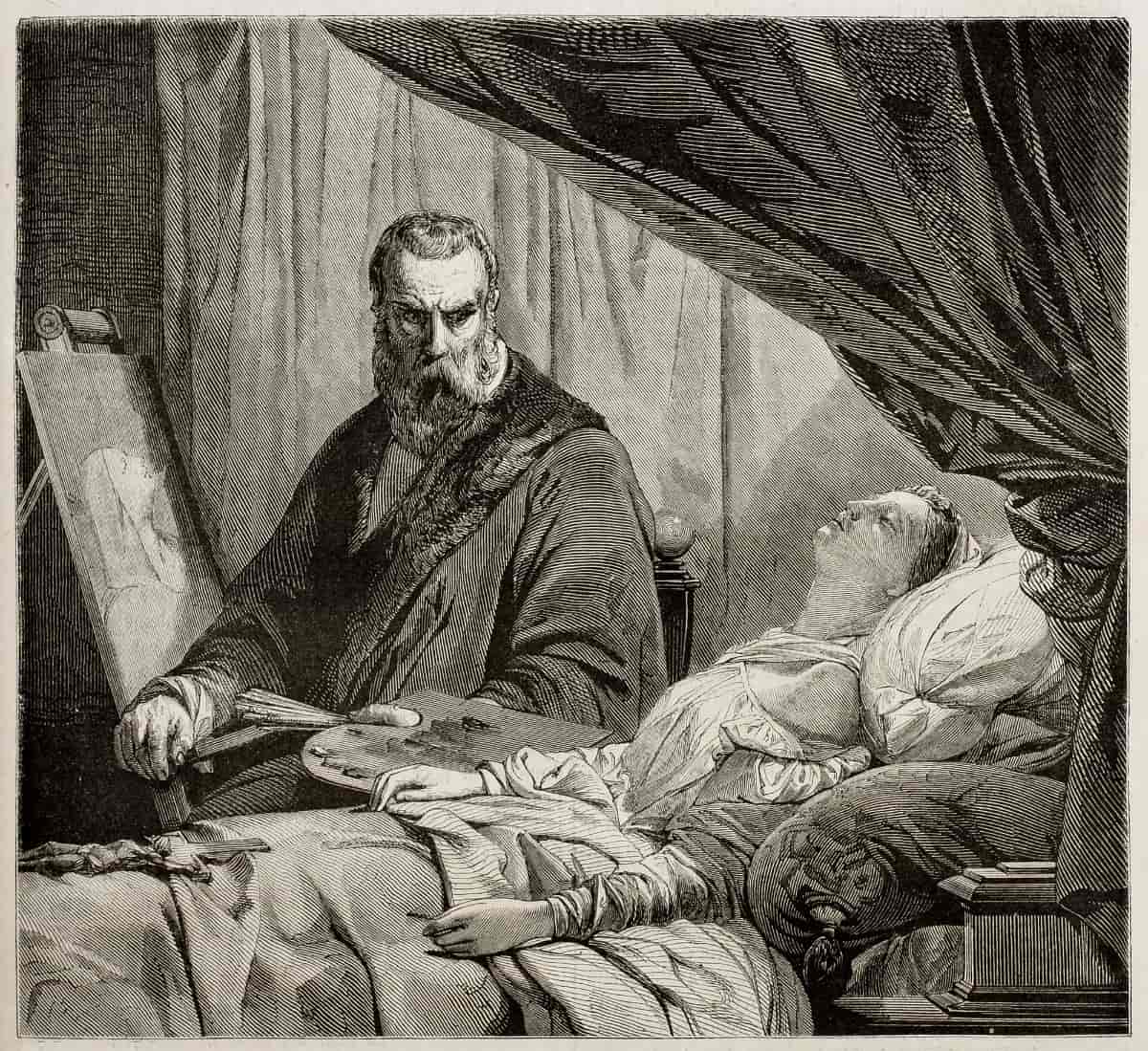 Common people during the Middle Ages continued to sleep on woven mats, or wool and hay stuffed burlap with the other members of the household. Sleeping on floor mats was a breeding ground for lice, ticks, and the spread of disease. Therefore the invention of the raised bed wasn’t just for show, it also contributed to the health and well-being of those that used it. Unfortunately, it wasn’t until the 16th century, as the middle class grew, that simple wooden raised beds would become available to the masses, and common people in the western world could stop sleeping on the floor. The 16th and 17th centuries also saw more middle-class people having separate sleeping quarters, or bedrooms, something that was previously a luxury available only to the upper class. Regardless, while beds for the rich were grander and more luxurious than ever, you still had to do a bit of fighting over the covers.

Into the 18th century the design of beds became more simplified, usually made out of carved wood in a four-poster style, devoid of the monumental canopies of the past. Separate bed chambers were also the new norm, and families slowly started to divide into their own bed chambers.

It wasn’t until the Victorian Era that sleep became an activity done in solitude. Thank you Victorians! No longer did people have to sleep in the same bed with mom, dad, brother, sister, maid, butler, and dog. However, the Victorians were so insistent on the importance of prudish privacy, that even married couples were not to share a bed. This trend of separate marital beds would stick around for some couples well into the 20th century. While social norms surrounding the bed, and its form had evolved through to the 19th century, mattresses still weren’t by contemporary standards, very comfortable.

To alleviate the discomfort of lumpy organic mattresses, the Victorians invented the spring mattress. In 1899 Canadian-born James Marshall invented the spring pocket mattress, and this new innovation would soon spring into popularity around the western world. The goal of the spring coil mattress was for the coils to act as “an independent suspension system that contoured to each person’s form and weight, providing unsurpassed support and comfort”[1]. Marshall’s invention would become the global standard for spring mattresses and would transform the way we sleep forever. The Marshall mattress company still operates today. 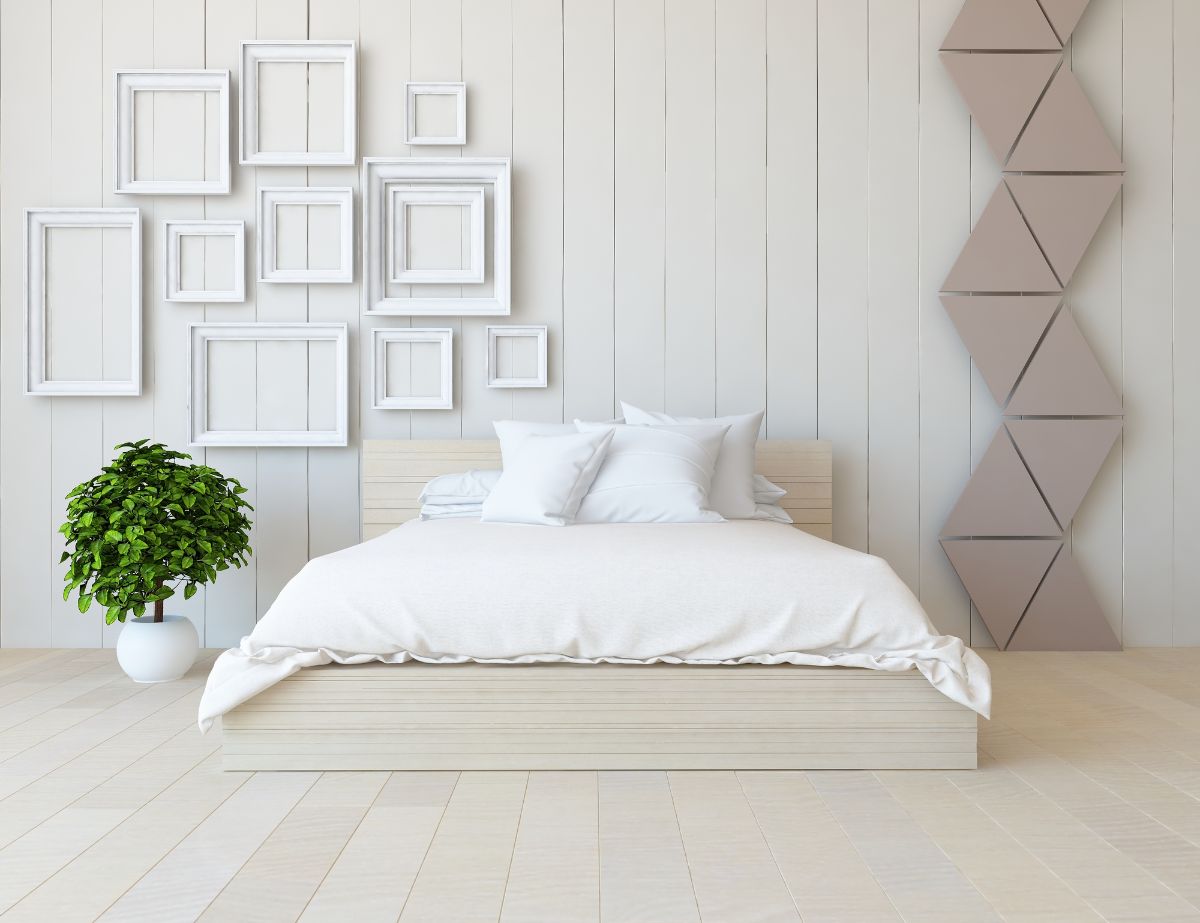 The spring mattress dominated the market through the 20th century, but innovation of course continued and new inventive ways to sleep were dreamed up. With the now endless options, you can choose to sleep in a bunk bed, a loft bed, a circular bed, a waterbed, a murphy bed, or even a racecar bed. The 20th century also saw the invention of the memory foam mattress, which still holds popularity today.

While the beds from the Middle Ages through to the 19th century were at times monumental in scale and weight, and highly decorative, modern design in the 21st century has gone back to basics in a way, with many beds now not even including as much as a headboard. A contributor to this minimalism was the “invention of rolled steel, which made possible the creation of what we call a bedframe”[2]. This makes it possible to simply have a mattress on top of a steel frame with steel or wooden slats for support. Many beds with a simple (or no) headboard more closely resemble ancient Egyptian and Classical Roman beds than the more recent Medieval and Renaissance bed frames, with the exception of stone pillows, thank gosh. 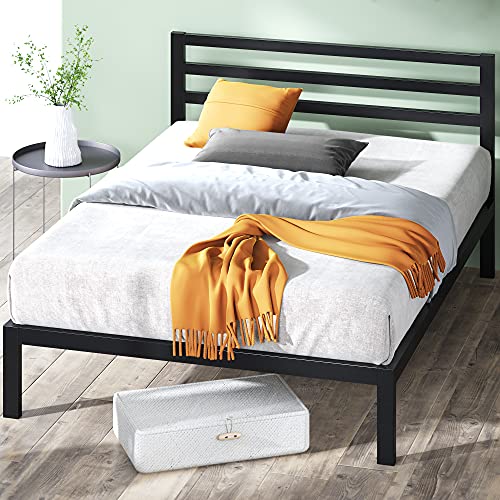 Nowadays you can build an IKEA or Wayfair bed in an afternoon. We’ve certainly come a long way from sleeping on sacks of hay in a relatively short amount of time. And thanks to the Egyptian invention of the raised bed, you can hopefully rest well tonight without any unwanted pests tucking in next to you.