Actor, director, and producer Tyler Perry constructed a magnificent mansion near Atlanta, Georgia, that has been sold two times in the past few years, once to televangelist David Turner and now to actor and comedian Steve Harvey, for $15 million, making it the highest real estate sale in Atlanta history. 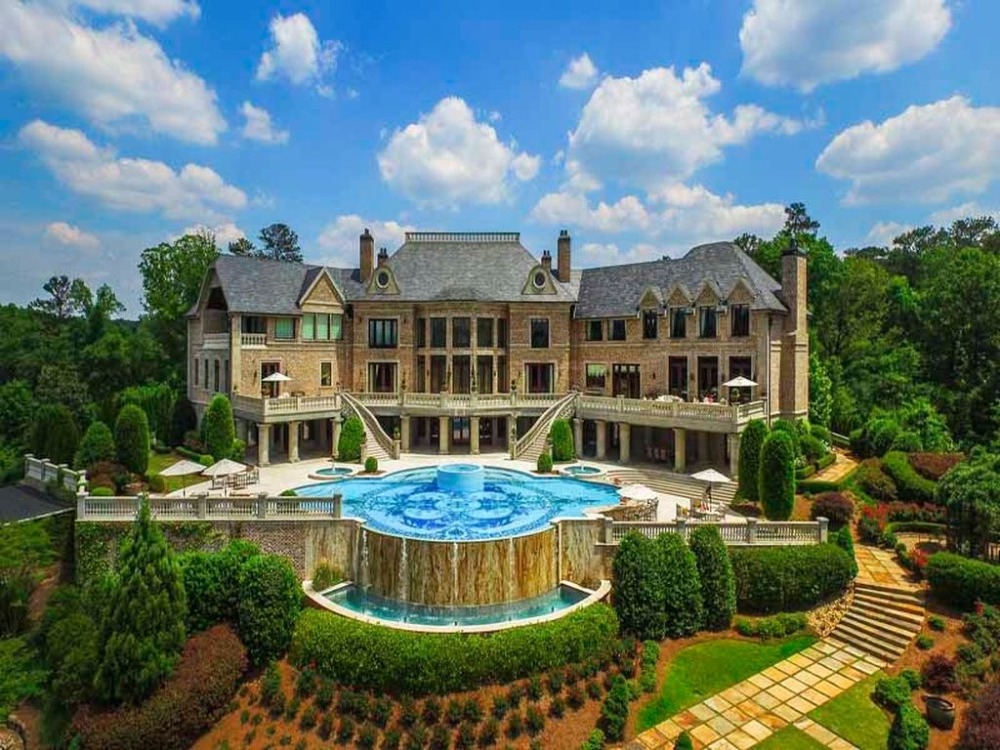 One of the highest-paid people in the entertainment business, Tyler Perry is famous for his creation and acting abilities as Madea along with numerous movies and TV shows he has produced, created, written, directed, and acted in. His latest hit is the TV series, “The Have and Have Nots” and over the years, he has amassed a  fortune of around $600 million, all before his 50th birthday.

While he has homes in numerous locations, including Wyoming, Texas, Los Angeles, and the Bahamas, he has always chosen to spend most of his time in Georgia.

Tyler Perry spent several years living in his longtime home near Atlanta that he built in 2007 on 17 acres of gorgeous land in the Paces Ferry community of Buckeye. The property boasts a scenic view of the Chattahoochee River that allows for plenty of stress-free living, relaxation, and creativity.

The design of the home was created based on the Palace of Versailles, but Perry added several features, including a helipad and infinity-edge swimming pool. The 34,688-square-foot home offers seven bedrooms and 14 bathrooms along with several formal rooms.

A two-story library, indoor resistance pool, a two-story parking garage with a lighted tennis court on top, a gym and spa area, movie theater, and an underground ballroom complete with a catering-style kitchen round out the property.

He even added a hobby house for good measure. Both formal and informal gardens are strategically placed throughout the property that is protected by a security system fit for a president. A guardhouse is also located on the property along with a full-scale generator and caretaker’s suite.

Tyler Perry threw down about $40 million to construct the property and a chunk of that budget was spent to purchase the gorgeous trees, full-grown plants, and topiary shrubs. The lush greenery spills out into the beautiful gardens from the house that has enough room to accommodate more than 100 guests at any given time.

Tyler Perry sold the property for $17.5 million in 2016 and the buyer, David Turner, recently sold the house to comedian and television host, Steve Harvey, for a whopping $15 million. The house has sold for the largest sum in the Atlanta area.

When David Turner lived in the home, he created a production studio so he could broadcast his network, Jesus Live TV. Atlanta Fine Homes Sotheby’s real estate agent Chase Mizell was the listing agent for both the sale to televangelist David Turner and comedian and actor Steve Harvey. Whether using the property to film TV shows or simply to reside there in style, there is no denying the fact that the house and its grounds are spectacular.

To this day, the sale of this property remains the highest home real estate sales in the Atlanta area. From the amazing indoor and outdoor swimming pools to the luscious grounds, this property is work every penny.