How did it come to be a brand that people aspire to shop from yet is still accessible? How is Crate & Barrel still holding up in a world where cheap and disposable is king because American incomes and spending power are declining? Let’s dive right into one of those sigh-inducing bedroom displays and find out. 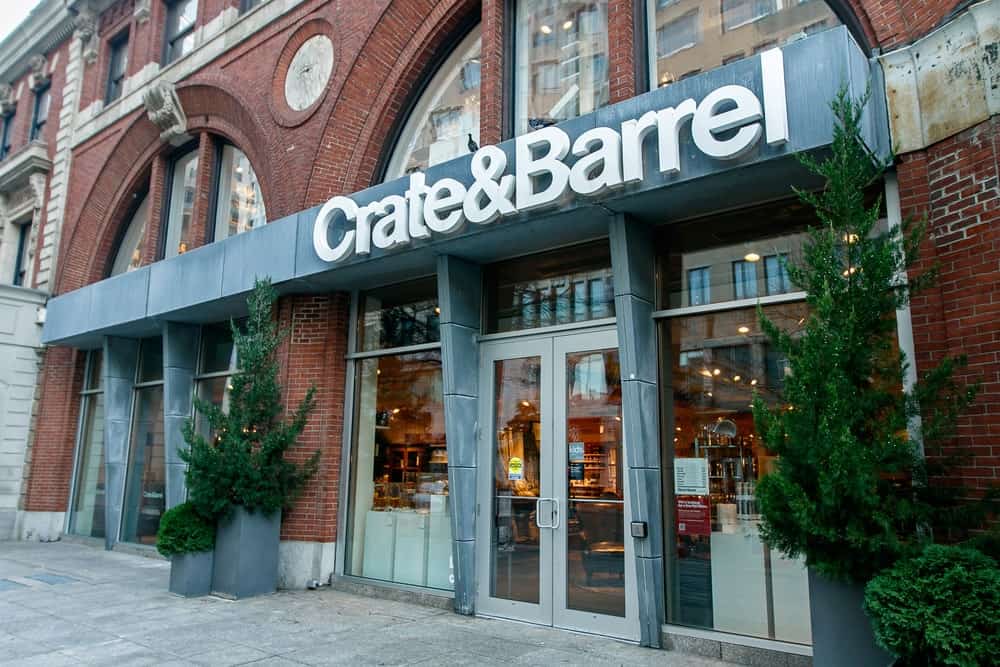 Ah, Crate & Barrel. IKEA’s cooler older sister who’s far removed from Billy bookcases littering college dorms and shitty ramshackle apartments with ancient plumbing, where you can see the fold lines in the cheap clapboard backs. No, Crate & Barrel doesn’t grock with tables that chip like dollar store nail polish and hit-or-miss kitchen detritus and closet buddies  that costs less than a beer nowadays. No, you’re going to pay $10 for that single spork and you’re going to like it. She’s a fancy bitch. This is where you get home goods when you’ve moved up in the world, far from the purview of the trash and treasure within Marshall’s.

How did it come to be a brand that people aspire to shop from yet is still accessible? How is Crate & Barrel still holding up in a world where cheap and disposable is king because American incomes and spending power are declining? Let’s dive right into one of those sigh-inducing bedroom displays and find out.

Humble and Eponymous Beginnings in Chicago 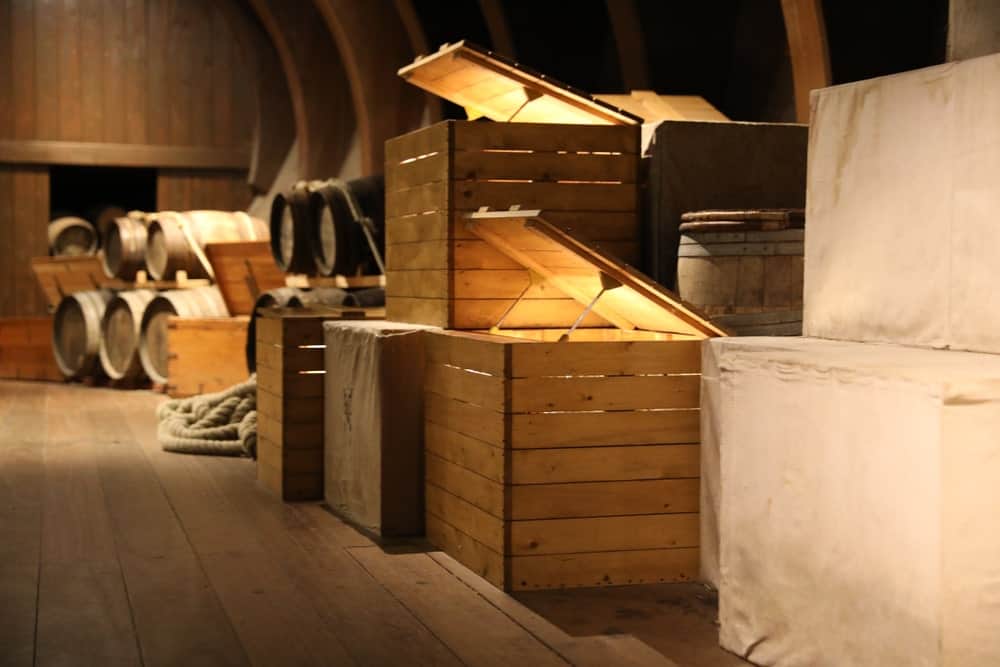 Crate & Barrel was not like many of the rapidly-grown startups that you see today where the founder sets out to build this huge chain or become like, the Uber of couch and kitchen gadget sales. It was founded by Gordon and Carole Segal in 1962, as a small shop in Chicago’s Old Town neighborhood.

The couple was in their twenties and had no knowledge of running of a retail business. It didn’t stop them from putting $17,000 of their personal savings (per a retelling of the store’s history by Gordon Segal at a retailer conference in the early aughts) into finding interesting and high-quality home furnishings that fit inside the 1,700 square foot former elevator factory that they rented. The shop got the name Crate & Barrel because that’s what they literally used to display their goods.

This has an interesting dual layer in and of itself because their business model was quite subversive in comparison to other retailers at the time, whether they were also mom and pop shops or large department store chains.

The Segals were intrigued by the beautiful designs and high quality of various home goods that they saw on their honeymoon. They went to small factories and skilled craftsman in Sweden, Belgium, and France to check out glassware, enamelware, copper pots, and other goods that were of unsurpassed quality because they figured that other young couples would be interested in outfitting their homes with these incredible finds that didn’t break the bank. 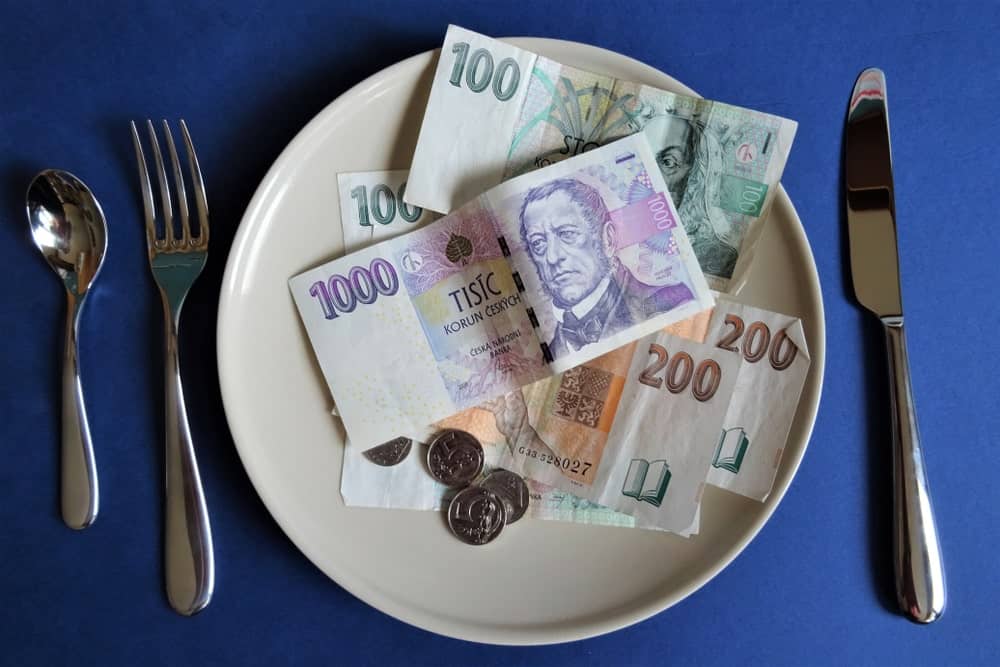 Although you might break your teeth on those coins. Czech bank notes: it’s what’s for dinner.

So, they didn’t make a big deal out of the fact that their goods were direct imports and not the same cookie-cutter merchandise that dozens of other home goods shops ordered from the same middlemen. European imports were rare and expensive treats from catalogs, or only the wealthy could afford them at specialty shops and high-end department stores. Bringing the product directly as the consumer, with the retailer acting as the importer, was a totally new concept in the early 1960s.

See also  Is Tile Bad for a Staircase?

The merchandise was displayed by simply turning the very crates and barrels they arrived in upside down, which turned out to delight their customers who were amazed that they could find glass from Scandinavia and innovative kitchen gadgetry from Western Europe in this tiny Chicago shop. Ergo, the Segals named their store Crate & Barrel.

This is long before being able to just open up lines of communication with factory owners in a snap on platforms like Ali Express, a young couple with no experience selling retail or importing were just living the American Dream: taking a huge entrepreneurial risk, cutting out the middleman, and getting devoted customers who’d excitedly tell other people about this place in Old Town.

Primarying the Art of Store Displays 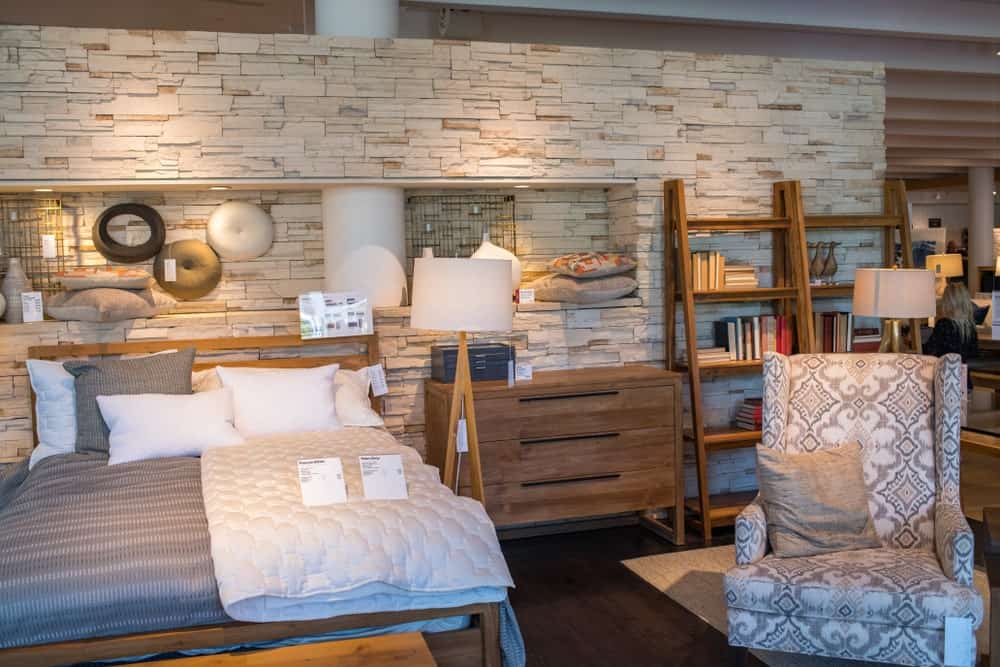 It goes without saying that every retailer needs to make the stores look appealing to get people to come in and stay. Even without accounting for how much digital noise and signals take up our headspace today, store owners and managers have always had challenges with artfully arranging merchandise and making really cool displays that get people’s attention. Some retailers create displays purely for functionality, such as grouping by product type or theme and showing how a garment looks on, while others go out of their way to make these fantastic window displays and store scenes that make you feel like you transported somewhere else.

Crate & Barrel displays today entail a mix of both the practical and the fantastical. But those impeccable living room simulations plopped between the high-quality bakeware and dreamy California king beds that cost three mortgage payments? Their origins lie within the same European shops and vendor displays that the Segals originally bought from. They paid close attention to how light and color created this cohesive and ethereal experience that lured customers off the streets and into the shops, and it wasn’t always about having this practicality that American shoppers ran their lives by, like “I need to go to a clothing store for new pants or the grocery store for tin foil.” In recalling Crate & Barrel’s early days, Gordon Segal recounts being in awe of this shop on Rue de Sienne in Paris that was nothing but green. The store didn’t specialize in home goods, apparel, textiles, or any other particular merchandise category although it wasn’t as disorganized as your average junk store. There was simply nothing but green wares, and that was the whole theme of the store. 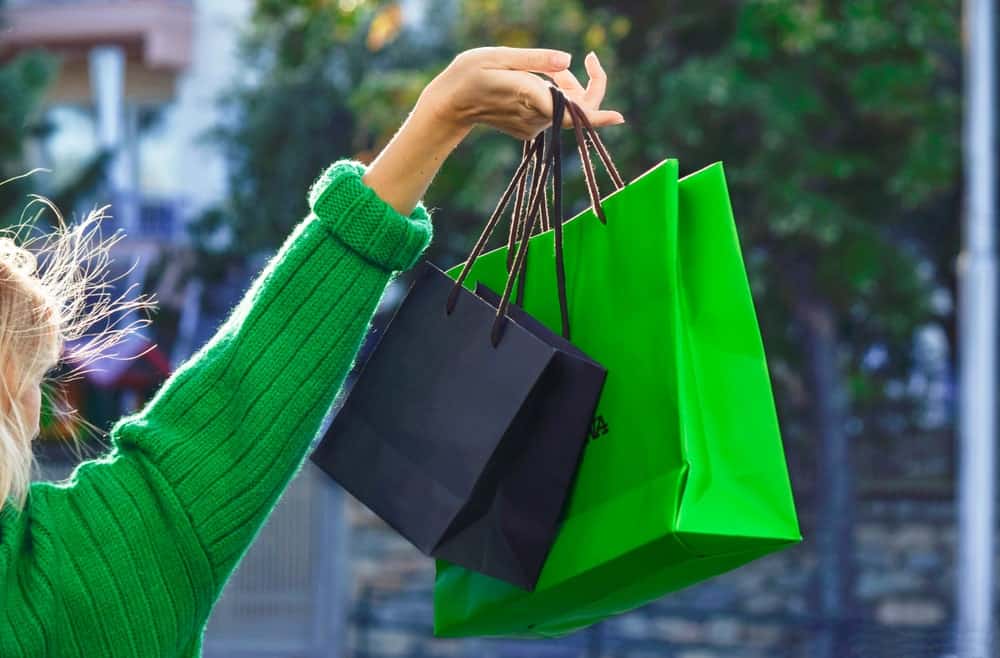 I assume this was a happy patron. It ain’t easy being green.

Segal wanted to bring that concept to America where people weren’t necessarily looking for something particular, like a new stew pot, but were drawn in by the beauty of light, color, and design. Inversely, he also wanted to bring that practicality front and center but without sacrificing aesthetic because these were products not meant to gather dust. This wasn’t your great-aunt Sally’s cheap serving tray from a pushcart on the Lower East Side that you kept in the top shelf of the kitchen cabinet because you can’t reach the damn thing, and only brought out when she occasionally came over. That Crate & Barrel mug? It’s not the mug you reluctantly keep because you can still use it, oh no, that’s a mug you drink from just about every day and look forward to it. They strove to make their whole product mix utilitarian, but of superior quality to the stuff ordinarily peddled in American home goods shops and department stores.

When building the flagship Crate & Barrel in-store displays, the Segals were as meticulous about the process as Hollywood set dressers. Not a single glass wouldn’t sparkle, not one rug tassel out of place. Gordon Segal decided to take the shop to the next level when he did some charity solicitations going door to door in their neighborhood, one that was nestled in the affluent Illinois suburb of Wilmette. He was surprised to find that despite having nice cars and enviable homes, the furniture wasn’t exactly show-stopping. So, he saw a market here: these people had money to spend, yet they weren’t spending it on the kind of furniture they could show off.

Then in 1967, Crate & Barrel created and mailed their very first catalog to extend their reach. This was followed by opening a larger store in Wilmette in 1968 that could accommodate the furniture and elaborate displays, and eventually had their own building designed on Chicago’s Magnificant Mile on Michigan Avenue (it was taken over by Starbucks in 2018). This move proved so successful that by 1971, the Segals opened another new store in a huge shopping center in Oak Brook, Illinois. Passion was poured into those displays that really showed off the furniture and various accouterments that were supreme quality but not overly expensive, and had minimalist appeal yet conveyed this fanciness that no other brand had been able to imitate.

Staying True to the Customer and Image 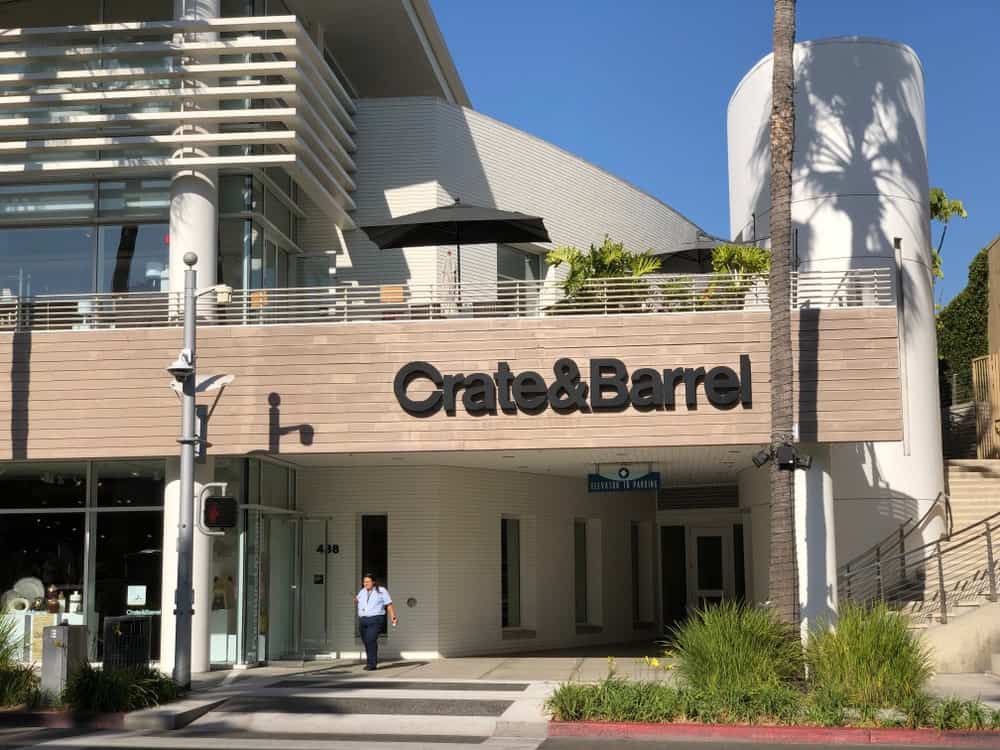 Today, Crate & Barrel operates over 100 stores throughout the world. A majority are concentrated in the continental US but there are also stores in Canada, East Asia, Latin America, and the UAE. Gordon Segal retired from his own company in 2008, although not much is documented about his wife Carole’s involvement over the decades– even though she was clearly instrumental in building the company, and was actually behind the name. A friend of hers suggested “Barrels and Crates” because they couldn’t afford display fixtures, but she switched it around to “Crate and Barrel” because she thought it sounded better.

See also  You Laugh at Gamer Chairs, But Your Back Will Thank You

Nevertheless, the company never became a public-traded one constantly being gobbled up and vomited back out by countless private equity firms, as is common for several chains that began with innovative concepts in the mid-20th century then experienced rapid growth. True to its roots in European product design, the still-private company is now owned by Hamburg, Germany based Otto Group under its Euromarket brand, but still doing business as Crate & Barrel. Interestingly, despite the company’s prestige and international presence, there were never any Crate & Barrel stores in European countries at all.

The bright colors, clean lines, simple font, and somewhat minimalist aesthetic that was harmonious with more abstract designs and traditional patterns from both Europe and the Middle East wound up being influential on designers and retailers alike. While product was definitely prioritized and Crate & Barrel management challenged their buyers to tow the line between mid-market and upmarket home goods that were sourced predominantly from European countries? They stayed alive and prestigious for so long because they put the customer experience first. 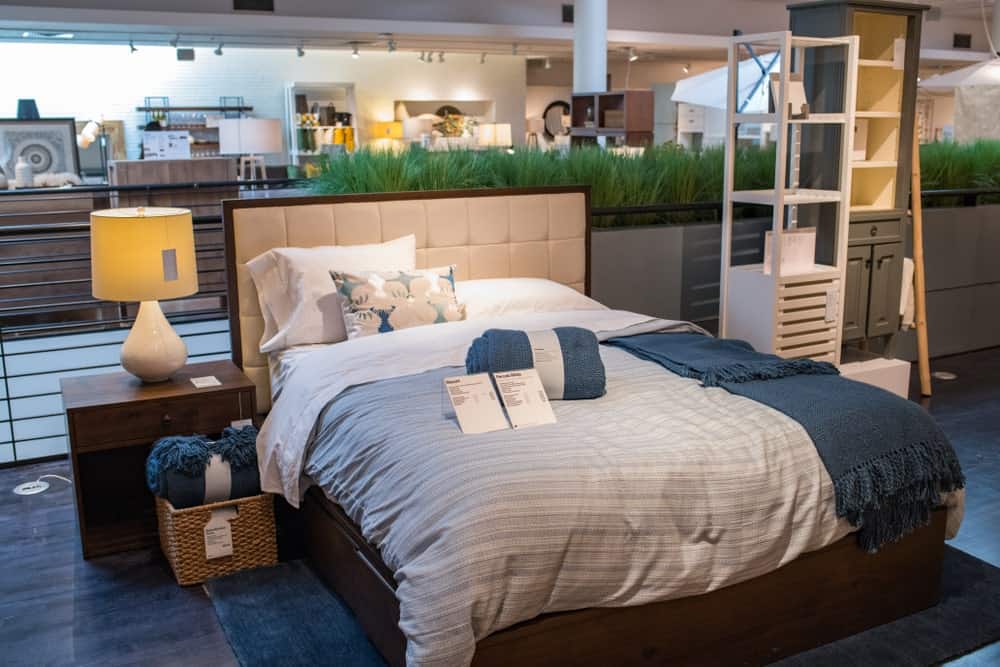 By the time other home goods shops and department stores could give Crate & Barrel some serious competition, they didn’t pay as much mind to what these stores were doing and just focused on their customers. Taking a page from the European retailers who inspired him, Gordon Segal prioritized customers over the product by making the stores theatrical but still open and practical, unlike the “boxed-in” customer experience you get at IKEA where you’re somewhat forced to immerse yourself in their displays, or the maze-like wandering at department stores. You can walk into this breathtaking bedroom display on the floor and give that bed a test drive, but then easily walk to the door or to that espresso maker you were eyeing.

I remember when I first had a little money in grad school, and was so excited to see if I could afford anything at the huge Crate & Barrel on 59th Street that was better quality than what my broke ass could only get at Target or, if I had a ride, IKEA. The furniture was still out of reach to me at the time, but I still have various bowls, ramekins, and plates that didn’t bankrupt me and have held up for over 10 years. All of them were made in Portugal or Italy, and must’ve held thousands of meals and enough coffee to get an entire graduating class through finals week. Even though it was clearly upmarket, it still felt very accessible and hey, what’s $9 for a mug when I must’ve accidentally broken at least eight of those shitty $5 mugs I’d get at the grocery store because I had a hard time finding ones big enough for making huge cups of super strong tea?

Even though some of the major flagship stores and expansions like the Michigan Avenue location and that 59th Street one I mentioned are gone now, you can still order from Crate & Barrel online today and that practicality masked in upmarket fanciness still lives on.