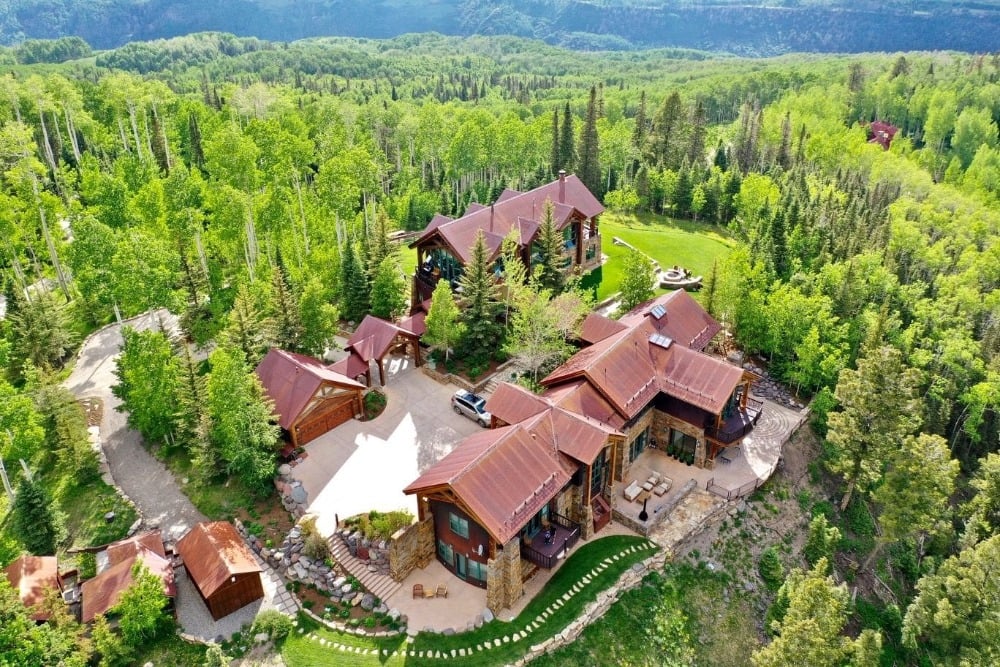 Unmatched natural beauty met by unquestionable luxury is the theme of the 10,000 square foot on 69 acres near Telluride, Colorado offered by producer Barry Sonnenfeld and his wife Susan Ringo. Glass walls offer unobstructed views of towering mountain peaks and sunset vistas stretching over 125 miles, with every amenity Hollywood royalty expect.

Hollywood producer Barry Sonnenfeld and his wife Susan Ringo have offered their Raspberry Patch Estate in Telluride, Colorado for $13.25 million. Many observers would say that would be a fair price for the views alone.

Tiny Telluride, Colorado hasn’t always been a mecca for megamillionaires. Located in a box canyon with a floor at 8700 feet, Telluride first got on the map as a gold mining town. The miners had to carry everything they needed to and from Telluride on pack mules because there were no roads.

A toll road and later two state roads made Telluride accessible to the outside world, but when the mines petered out, there was nothing to do — until about 1970, when somebody realized that this cold Rocky Mountain valley is the perfect place for skiing. The second wave of settlers and frequent visitors to Telluride, including the writer of this article, were ski bums who appreciated those rare snows in June and August that made Telluride an ideal spot for nearly year-round winter recreation.

In the late 1990s, Telluride was discovered by the rich. The little town had long cultivated an attitude of keeping daily life positive. After all, you could be snowed in with your neighbors for months on end. This ethos of live and let live in a fantastically beautiful setting attracted Tom Cruise, Oprah Winfrey, and Oliver Stone, along with thousands of endurance athletes and fans of Rocky Mountain beauty. And it became the year-round home of Barry Sonnenfeld and Susan Ringo.

In the 1980s, Sonnenfeld was a producer of independent films. Then he caught a break by becoming the cinematographer for the Coen Brothers’ production of Blood Simple. You may be familiar with Barry Sonnenfeld through his movies Addams Family, Throw Momma From the Train, Get Shorty, Lemony Snicket’s A Sequence of Unfortunate Events, and the Men in Black trilogy. By the time Barry and Susan arrived in Telluride, they fit right in.

The Sonnenfeld and Ringo estate on 69.23 acres on a knoll on Raspberry Patch Lane offers easy access to State Highway 145 for easy access to transportation. The 10,900-square-foot home boasts seven bedrooms and nine bathrooms. There is a living room with glass walls for unobstructed views of the surrounding mountains and a kitchen with two islands and a loft to the side. The screening room features cozy leather-upholstered sectional furniture. There is a two-bedroom home for the property caretaker and a luge course. The property even features a labyrinth and an outdoor amphitheater. There is a heated garage, city services, and high-speed Internet.

The Raspberry Patch Estate is at the end of a road leading to the very top of a knoll overlooking thousands of acres of Telluride scenery. It borders a national forest, open fields, and a river. It has unobstructed views of 14,000 foot Mount Wilson and unobstructed views stretching 125 miles to Utah. In May of 2020, this property had been on the market only a few days, so if you are interested in the premier estate in Telluride, you’re in luck. The Sonnenfeld Raspberry Patch Estate is listed with Patrick Pelisson of Telluride Properties.