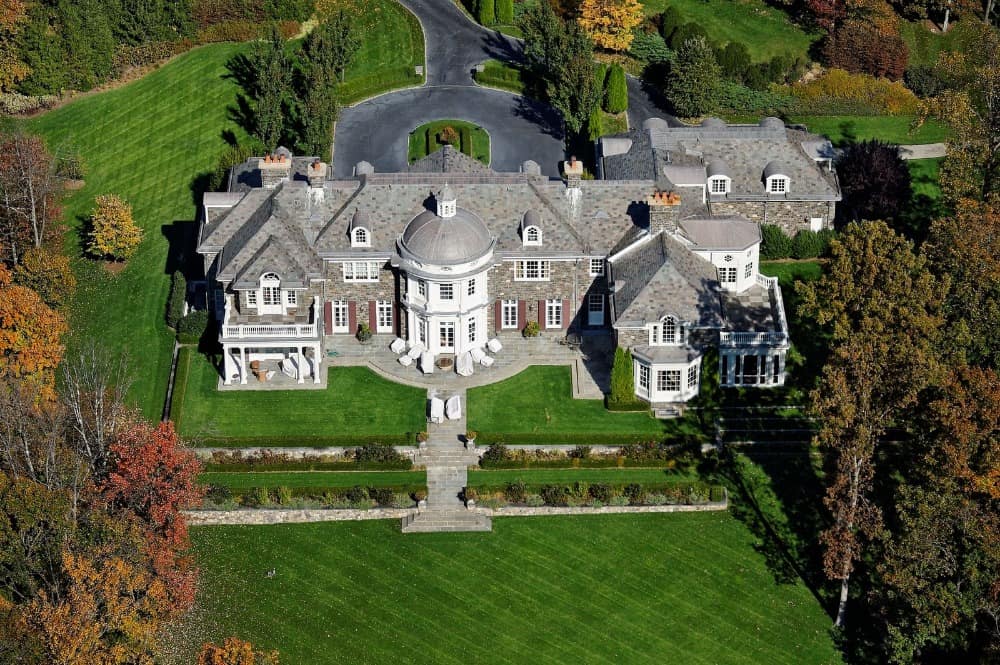 Are you looking for a little place in the country convenient to metropolitan New York? This six-bedroom, 20,000-square foot Georgian mansion in Westchester County features a full basketball court in the basement, a two-story library with a hidden staircase, an infinity pool, a tennis court, 86 acres of woods for privacy, and its own lake.

That’s what is waiting for you at 48 Haights Cross Road in Chappaqua, New York, which is actually an exclusive area of the town of New Castle in Westchester County, about 30 miles north of New York City. And even though Zillow tells us that there are not enough comparable homes even to guestimate this mansion’s value, reports are that it brought a cool $27.5 million at auction last year.

What do you get for $27.5 million in Chappaqua besides some celebrity neighbors? Let’s do an imaginary tour.

For a little shy of $30 million dollars, you can buy lots of privacy. This Westchester property sits on 86 wooded acres with its own lake.

This Georgian mansion was custom-built for the former chairman of Customer Speaks and CEO of Vision Financial Corporation Stewart Dauman and his wife Debra in 2004, about five years after the Clintons moved in nearby. The home was featured in a Wall Street Journal article entitled “A Timeless New York Mansion” in November of 2014.

The home was designed by architect Boris Baranovich, famous for his projects in The Hamptons, the East Village, and Greenwich, Connecticut. Baranovich built the house to look like it was constructed 100 years ago and to maximize privacy.

The mansion is appointed with a slate roof and custom stonework and millwork through the interior. The grand entry is bathed in light from its domed ceiling. A spiral staircase leads four stores upward to the dome.

The two-story library is paneled in rare woods and includes a hidden staircase behind shelves of books. The game room doubles as a theater with a drop-down projection screen and an impressive full bar.

The home has eight fireplaces. The chef’s kitchen has Wolf and Subzero appliances and a breakfast room. The basement features not just a wine cellar but also a tasting room, and a sauna, a large gym, and an indoor basketball court.

The primary bedroom occupies its own wing. It has its own balcony, sitting room, walk-in closets, and almost-unimaginably spacious bathroom decorated in marble.

Behind the house is an infinity pool that is beyond Olympic size. The pool house has a full kitchen and two full bathrooms. Also behind the house are a gazebo and a tennis court.

Finding a new owner for this magnificent house has been a difficult process. The Dauman’s put the house on the market in 2010, asking $30 million. Still unsold in 2018, the house has been listed for a relative bargain price of just $13.5 million, but after the most recent owners’ bankruptcy efforts to sell the house was finally successful in 2019.

But if you are in the market for a $30 million mansion within easy commuting distance of New York, don’t despair. Celebrities are always looking for something more elegant that makes a stronger statement — or going broke because they spend too much on their houses — and in a few years, this wonderful house will no doubt be on the market again.