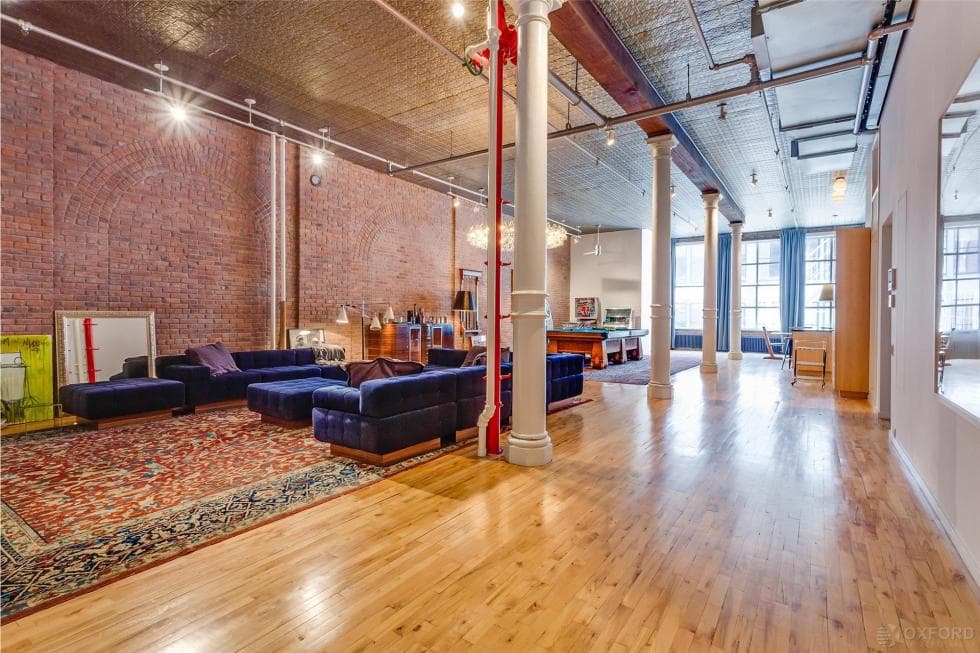 Adam Levine's one-bedroom New York penthouse has sold for $5.4 million. The 2,800-swuare-foot loft-style home comes with a 60-foot living room and a luxurious bedroom suite with a jacuzzi. Brick walls, arches, and columns add an extra dimension of elegance and style. Discover the charm of this one-of-a-kind home.

Ever wonder where Maroon 5 member Adam Levine went home to after finishing up a road tour with the band?  Until fairly recently, one of his homes was a penthouse in New York City…until he put it up for sale.  If you were thinking about buying his SoHo pad, we need to tell you that it’s already found a buyer — shoe designer Nick Lucio.  The luxurious loft-style apartment sold for $5.4 million.  Let’s take a look around.

This home is huge, especially for a big-city apartment.  It spans 2,800 square feet.  The original floor plan included three bedrooms, but Levine converted two of them into open space, leaving him with one impressively-sized primary bedroom.  This luxurious suite features the types of amenities you might expect to find in a celeb house — a large walk-in closet, dressing area,  and a hot tub with a separate shower.

The home was built in the 1990s.  Throughout, you’ll find wood floors and brick walls with arches in them.  Large windows fill the home with natural light and give picturesque views of the cobble-stoned street below.   Decorative lighting shines down on you from 13-foot ceilings.  Six columns around the expansive living area give it the feel of a grand ballroom.  The 60-foot living room is furnished with cushioned couches and a coffee table.

Beyond the living room is a small open area with a cabinet.  This spot leads to a game area, but with the open floor plan, it’s not actually a separate room.  A pool table occupies most of it; its wooden perimeter matches the tone of the floor.

The living area is one of the best features of this home because it’s so open.  The possibilities of how you could use the space are virtually limitless.  And if you don’t mind swapping out or rearranging furniture from time to time, this space definitely gives you some flexibility.  If you like to entertain, you can easily accommodate a small crowd here.  You could also partition off a section of it to use as a home office or art studio.  If you’re a musician like Levine, you can turn part of the living area into a media room.

In the kitchen, light wooden cabinets line one wall.  In the center is a large island, complete with granite countertops.  Chairs surrounding the island suggest that it also serves as a dining area.  The stainless steel appliances are clearly high-end.

Adam Levine has worn many hats over the years.  He’s probably best-known for being a judge on The Voice and the lead singer of Maroon 5.  He’s also served as the band’s guitarist and songwriter.  When he was in high school, he and some of his friends formed a band they called “Kara’s Flowers.”

They signed their first record deal when a producer heard their performance at a house party.  The band even made an appearance on Beverly Hills 90210 in 1997.  Kara’s Flowers eventually broke up but got back together in 2000 as Maroon 5.