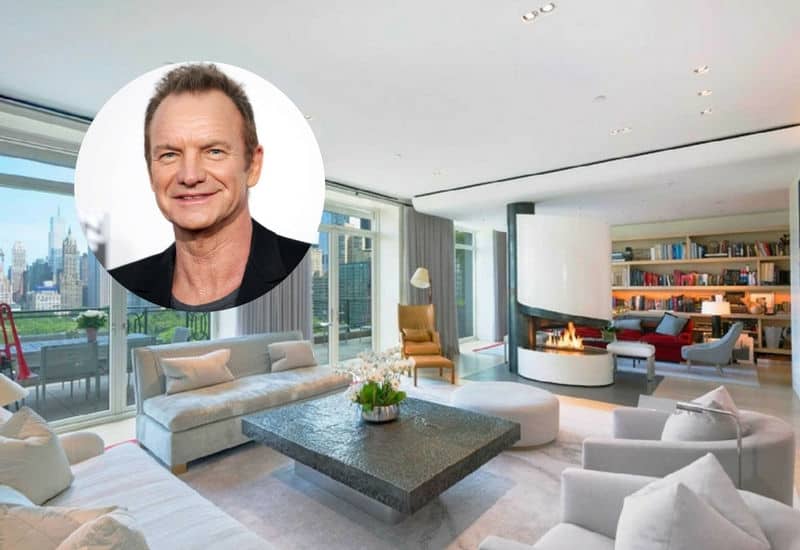 Singer/musician and philanthropist Sting, best known for his hits with the Police and solo career in the 1980s, has put his Central Park West penthouse up for sale.

Sting and his wife Trudie Styler bought the apartment two years ago for $30 million, and are now selling it for $56 million. The 5,417-square-foot residence, located at 15 Central Park West on the Upper West Side of Manhattan, has four bedrooms, four full bathrooms, and two partial baths.

His birth name was Gordon Sumner, but he adopted the moniker Sting broke into the music biz with his bandmates in the Police in the late 1970s. By the mid–80s, he ruled the charts with solo songs such as Fortress Around Your Heart and If You Love Somebody, Set Them Free. His successful solo career continued in the 1990s with the albums Soul Cages and Ten Summoner’s Tales. He continues to write and record and received a Kennedy Center Honoree Medallion in 2014 for his work in the performing arts. 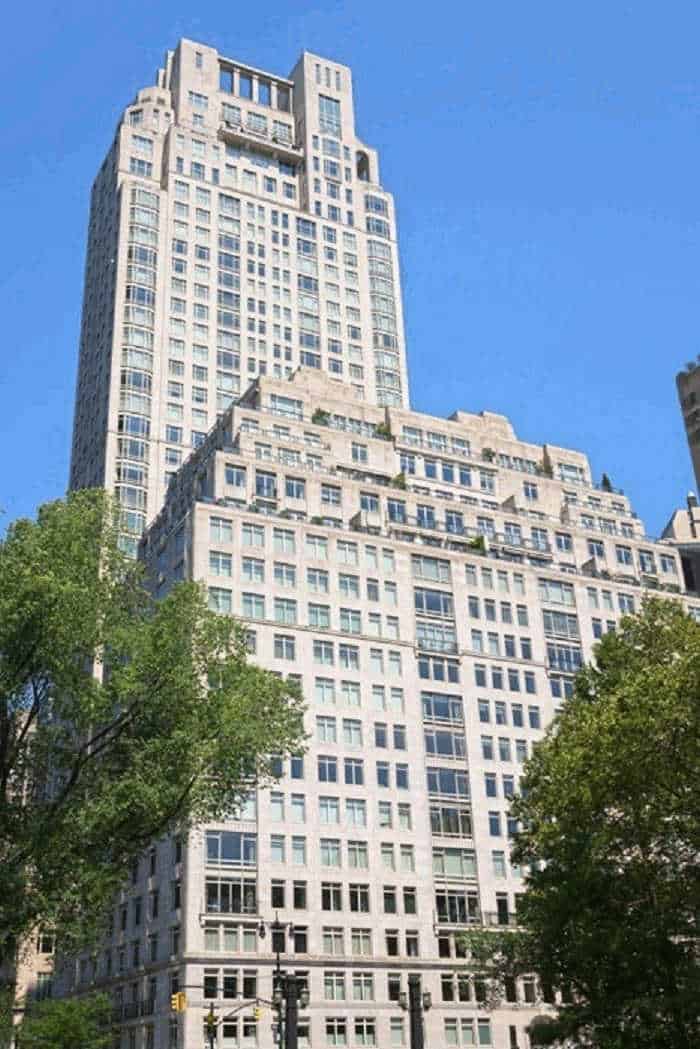 This tastefully decorated duplex penthouse offers a view of the park from almost every room. 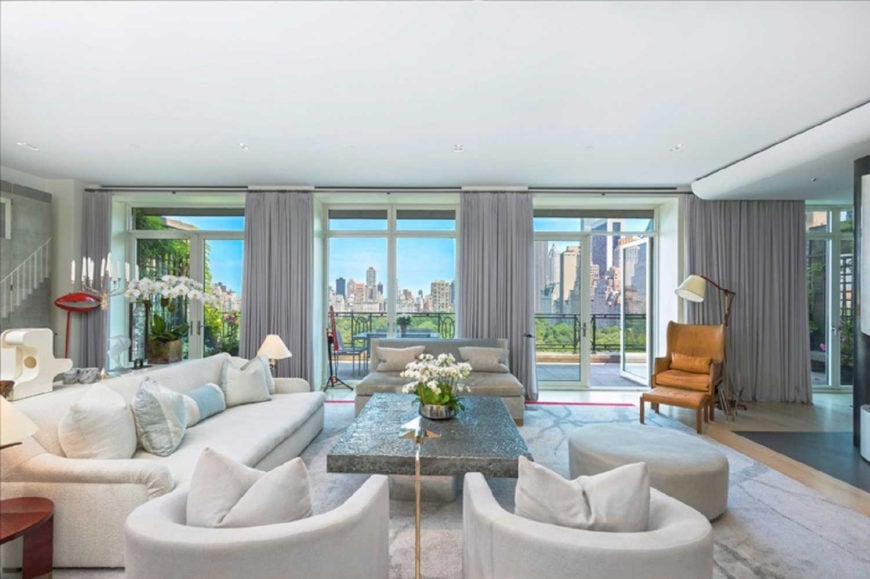 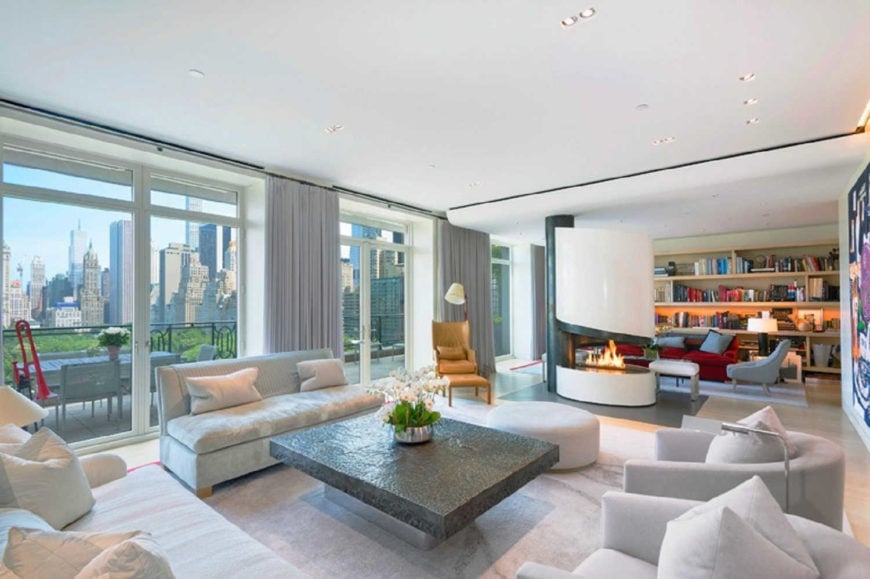 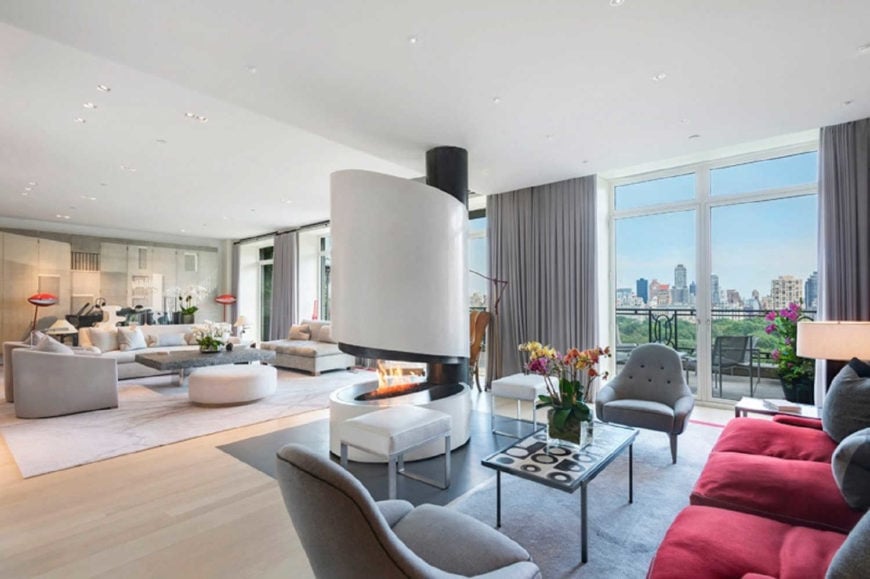 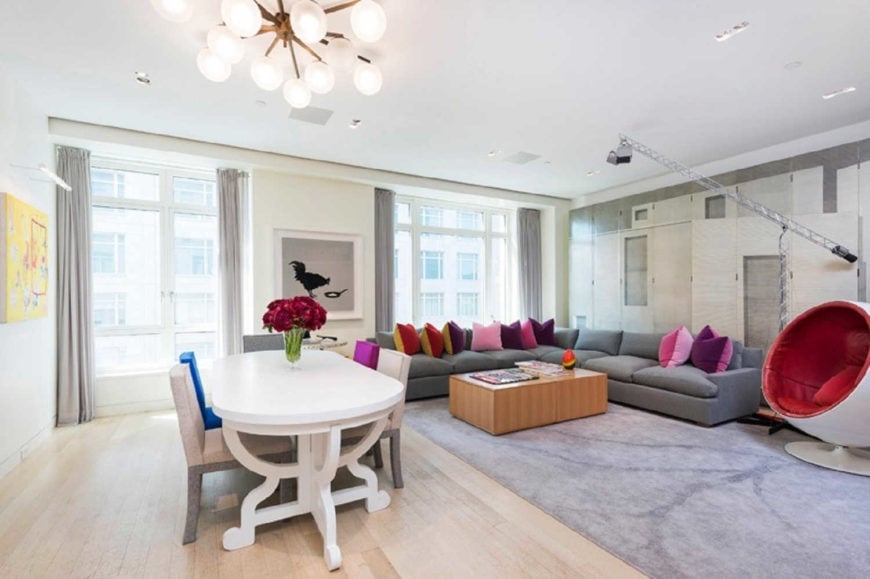 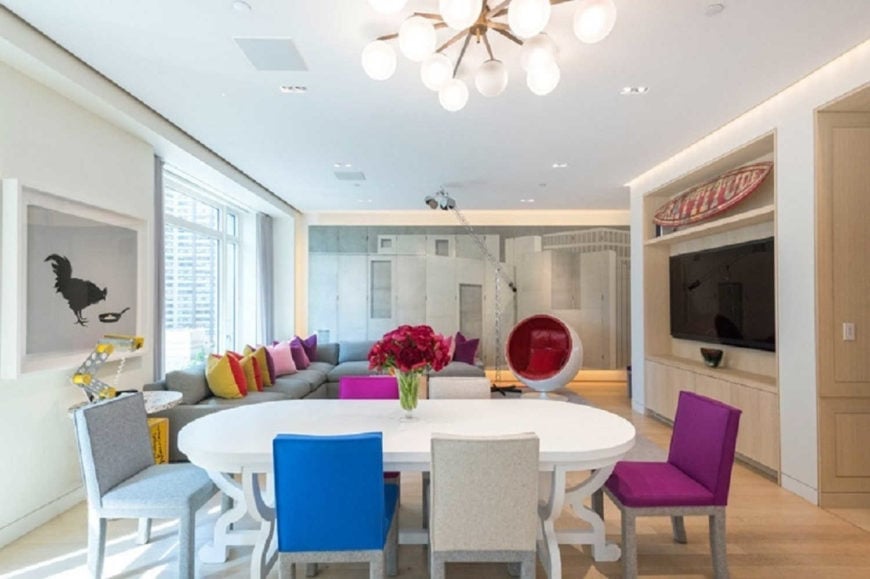 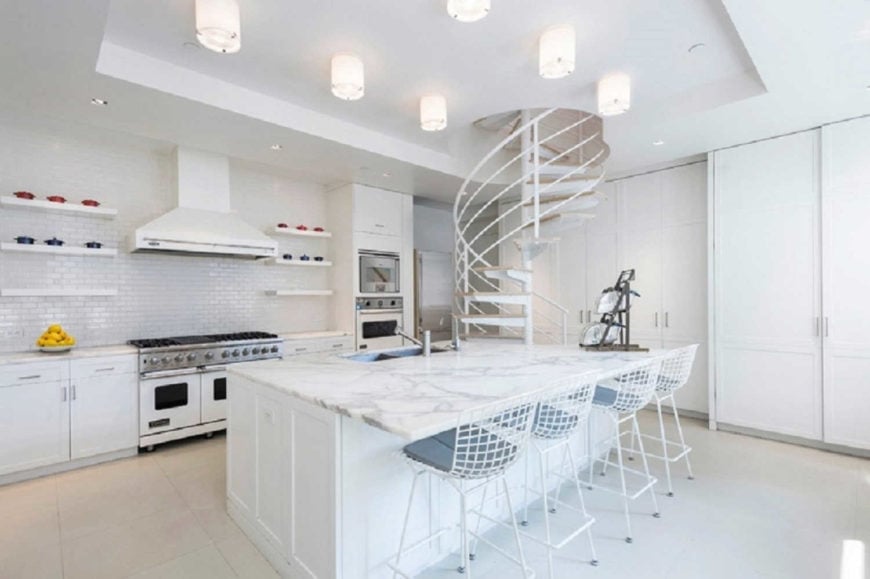 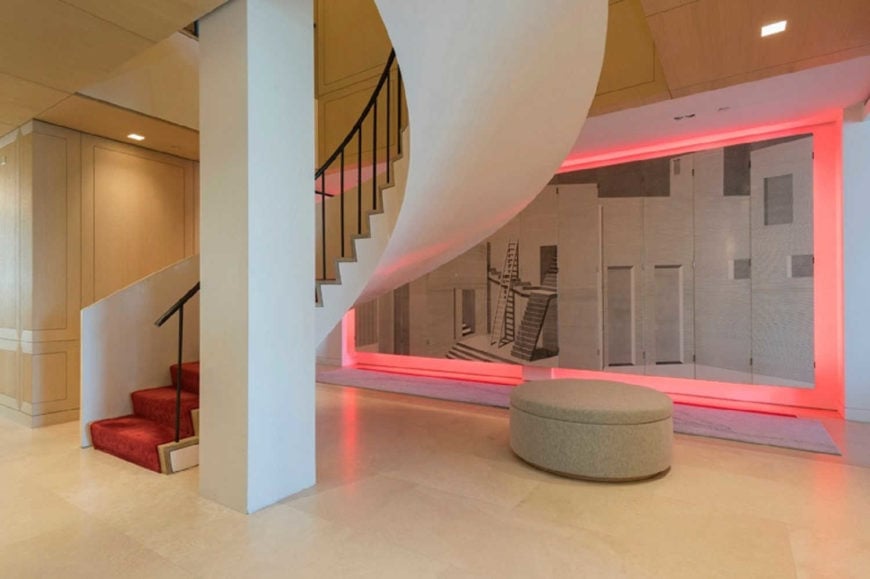 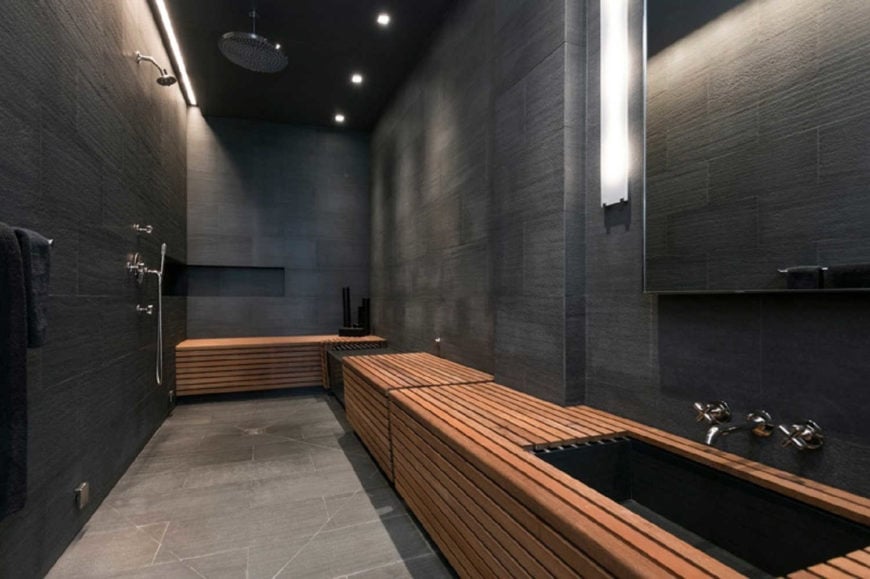 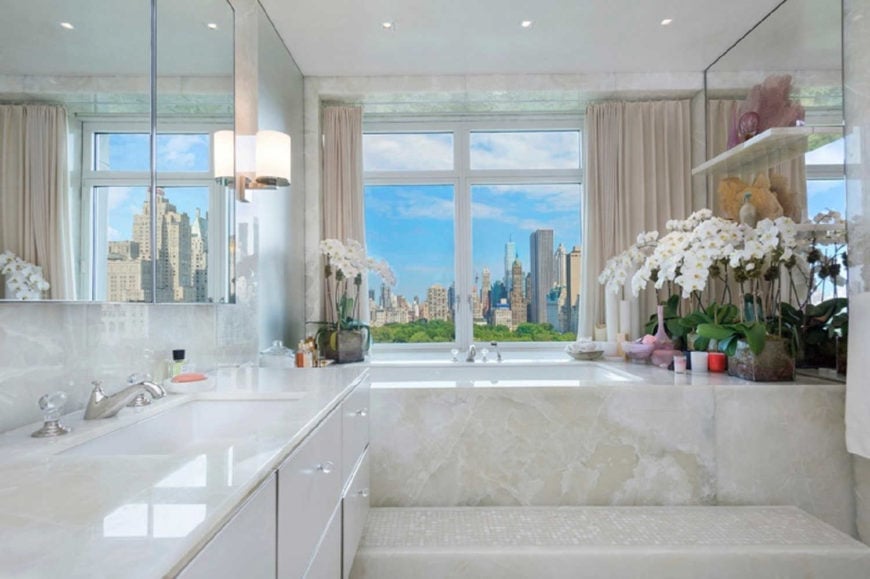 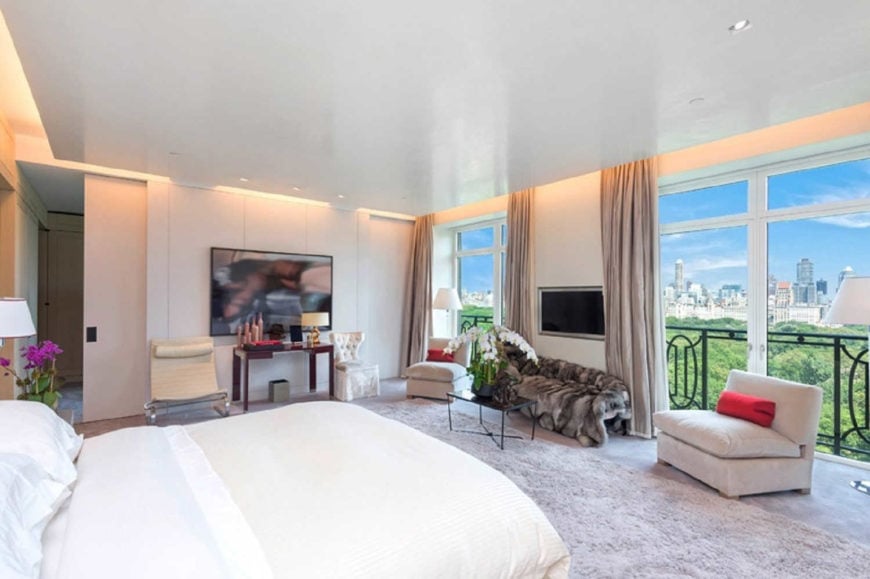 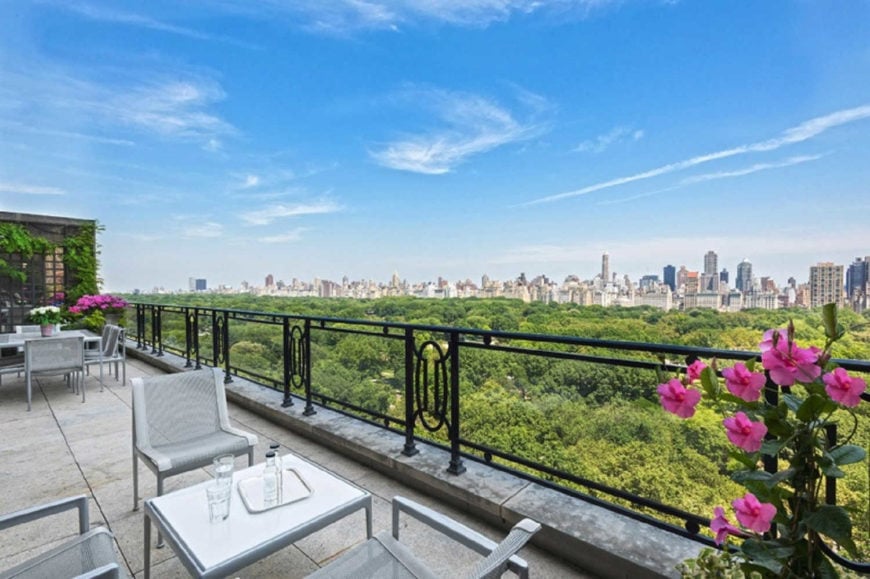 A winding staircase in the foyer draws attention the ten-foot high ceilings. A multi-panel wooden screen by Italian artist Piero Fornasetti graces the area behind the stairs.

The living room, framed by floor-to-ceiling glass, overlooks Central Park. The sliding glass doors open out to a 400-foot terrace with an even better view of the park.

A curving Fibonacci fireplace splits the large living room into two distinct areas. The reading area with built-bookshelves provides a perfect respite for quiet times. The entertainment area offers comfortable, stuffed white armchairs and sofas for after-dinner relaxing. It has a view of the park on one side and a pop-art mural on the other.

The all-white kitchen has built-in appliances and a marble-topped island. A few steps away from the island, a curved staircase snakes its way upstairs.

A dining area features a white table on an immaculate blond wood floor in one-half of the room. A gray sectional sofa and retro 1960s “ball” chair perk up the other half of the room.

The second floor, accessible by a separate entrance off the elevator, has an opulent primary suite looking out at the park. A flat screen TV is embedded into a side wall, and two stuffed white chairs flank a small sofa with a fake fur covering.

The white marble bathroom has a built-in tub. His and Hers dressing rooms and dual spa baths and sauna complement the primary bathroom.

If you can make it to 15 Central Park West, you can make it anywhere. Often called “the world’s most powerful address,” the building has been home to many famous actors, musicians, athletes and public figures over the years. Current and former residents include Robert DeNiro, baseball player Alex Rodriguez, Denzel Washington, Norman Lear and many financial and hedge-fund executives.

Amenities at 15 Central Park West include:

Residents can purchase one of the wine rooms for $80,000. The staff consists of more than a doorman and a few concierges. The building has three package room attendants, eight porters, and a full-time administrative assistant.

About the Upper West Side of Manhattan

The Upper West Side, a primarily residential area, is situated between Central Park and the Hudson River. It runs from West 59th Street to West 110th Street. It’s considered one of New York City’s wealthiest neighborhoods. The UWS features some of the best cultural institutions in the city, including the Lincoln Center for the Performing Arts, the New York City Ballet and the Metropolitan Opera House. It’s also home to the American Museum of Natural History, New York Historical City and several other academic and historical points of interest

Check out some more photos of this luxury residence below.

Home Expert (Bot)
Hello, how are you? Ask me anything about interior design, home improvement, home decor, real estate, gardening and furniture.
98 shares