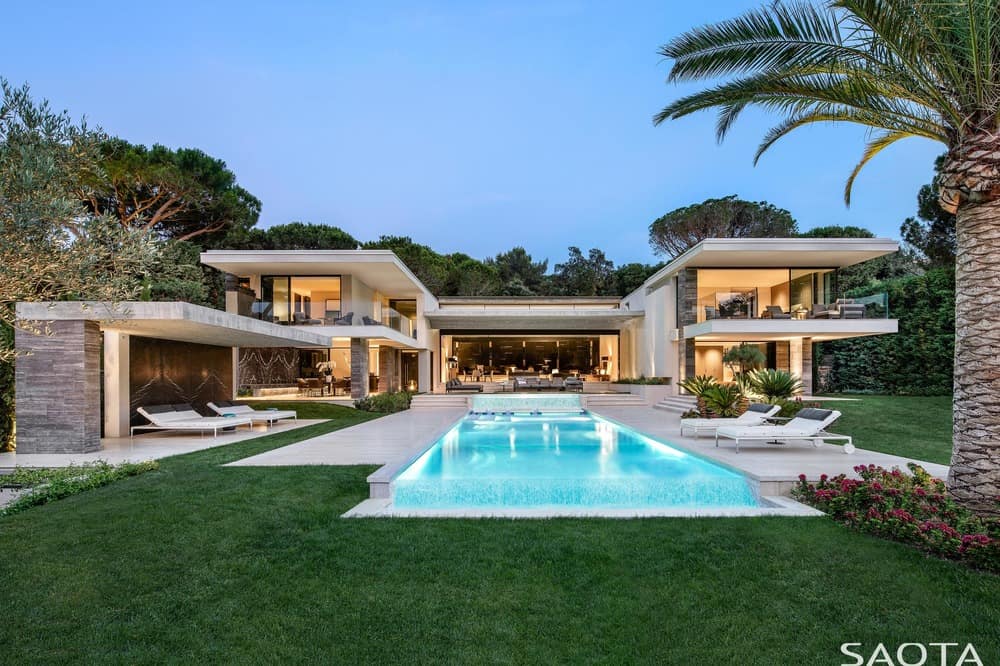 This family summer house in Saint Tropez, France designed by SAOTA, is a contemporary interpretation of traditional Mediterranean Riviera architecture. Free from the constraints of the historical vernacular, the project became an opportunity to advance the expression of form, space, and lifestyle associated with the location.

The long, narrow site backs onto a glade of pine trees to the south. “When we first went onto the site, we found it lovely that you could look up into the pine forest and experience those amazing volumes under the canopies of the pines,” says SAOTA Director Stefan Antoni. “That became an important cue when we developed the design.”

“Our first objective was to try to maximize the perception of space,” says SAOTA Director Phillippe Fouché, lead architect on the project. “We did that by creating generous outdoor covered spaces, which make it feel as if the interiors spill outwards and extend to the front of the site.”

The house is arranged between two rectilinear side wings that embrace a central courtyard. The bedrooms occupy all of one wing, plus the top level of the second, while the kitchen and dining areas are located downstairs. The main suite has a dedicated staircase that provides access from a double‐volume private lounge. The main living and entertainment areas are positioned in the central high‐volumed void between the wings, capped with a dramatically folded floating roof, which imparts a sense of grandeur to the interiors. The folded shape of the roof, formed using raw wooded planks in a subtle reference to the pines, not only echoes the cascading terraces of the landscape but also contrasts with the straight‐lined geometry of the wings on either side. Fouché adds that the fold in the roof plays a structural role too, enabling a 12‐meter span without any columns.

Positioning the house towards the back of the site created the opportunity for the living spaces to step down with the terraced landscape, seamlessly extending the useable space. SAOTA’s approach explored various strategies to maximize the perception of space, such as cavity doors to blur the distinction between interior and exterior spaces and allow the cool summer breezes to flow through the house.

The central pool, which cascades down an incline linking a martini seating area with the main swimming pool together with the clean lines of the side wings, accentuates the lines of perspective, exaggerating the length of the property, leading the eye to the horizon and further contributing to the illusion of space.

Along its eastern side, Le Pine riffs on the local architectural vernacular, which typically features thick walls and an emphatic distinction between interior and exterior. Where the entrance path ascends from the off‐street parking area below the house through floating platforms in the garden, the house presents an exaggeratedly weighty, solid façade with only small apertures. Not only does this create privacy for the rooms in this wing, but it also leads residents and guests on a journey of discovery towards the threshold. Fouché points out, however, that these heavy walls float above the ground in a contemporary interpretation of the traditional typology, hinting at the modern, open volume beyond the relatively understated entrance. Beyond the pivot door, the light‐infused living and entertainment space is revealed in a moment of drama and surprise.

The interior was conceived as a gallery‐typed space, which involved not only creating clear open areas but also inviting the light in, particularly from above. “Wherever we could, we tried to drop light into the volumes,” says Fouché. Carefully placed clerestory windows wash the interior with natural light and provide framed glimpses of the canopy of pines on the slopes above the property, which also helped determine the section of the undulating ceiling. Other frameless windows and apertures capture views of surrounding courtyards, further integrating interior and exterior and knitting the house into its setting.

The interior finishes contrast raw, expressive concrete on the soffit, for example, with dark marble cladding on the rear walls, lighter stone towards the front of the house and vein‐cut travertine floors. The natural materiality emphasizes the architecture as an extension of the landscape, while the dark stone towards the back of the living area accentuates the illusion of depth, further enhancing the sense of space.

Architecturally, Le Pine explores the potential for a new expression of the spirit of Saint Tropez, drawing on SAOTA’s insights earned over decades of designing houses along Cape Town’s Atlantic seaboard, liberating its interior spaces and enabling a refreshing indoor‐outdoor lifestyle. 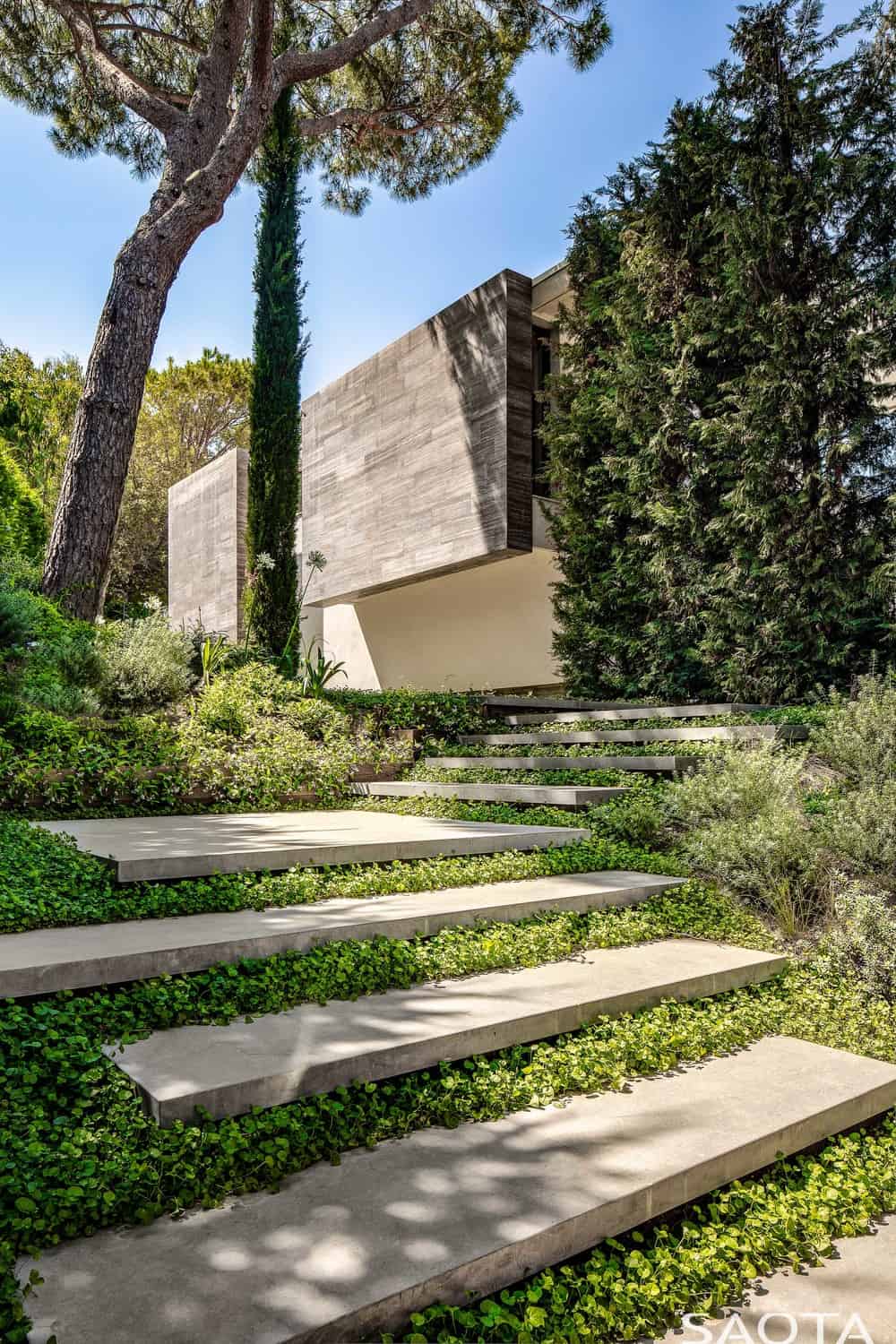 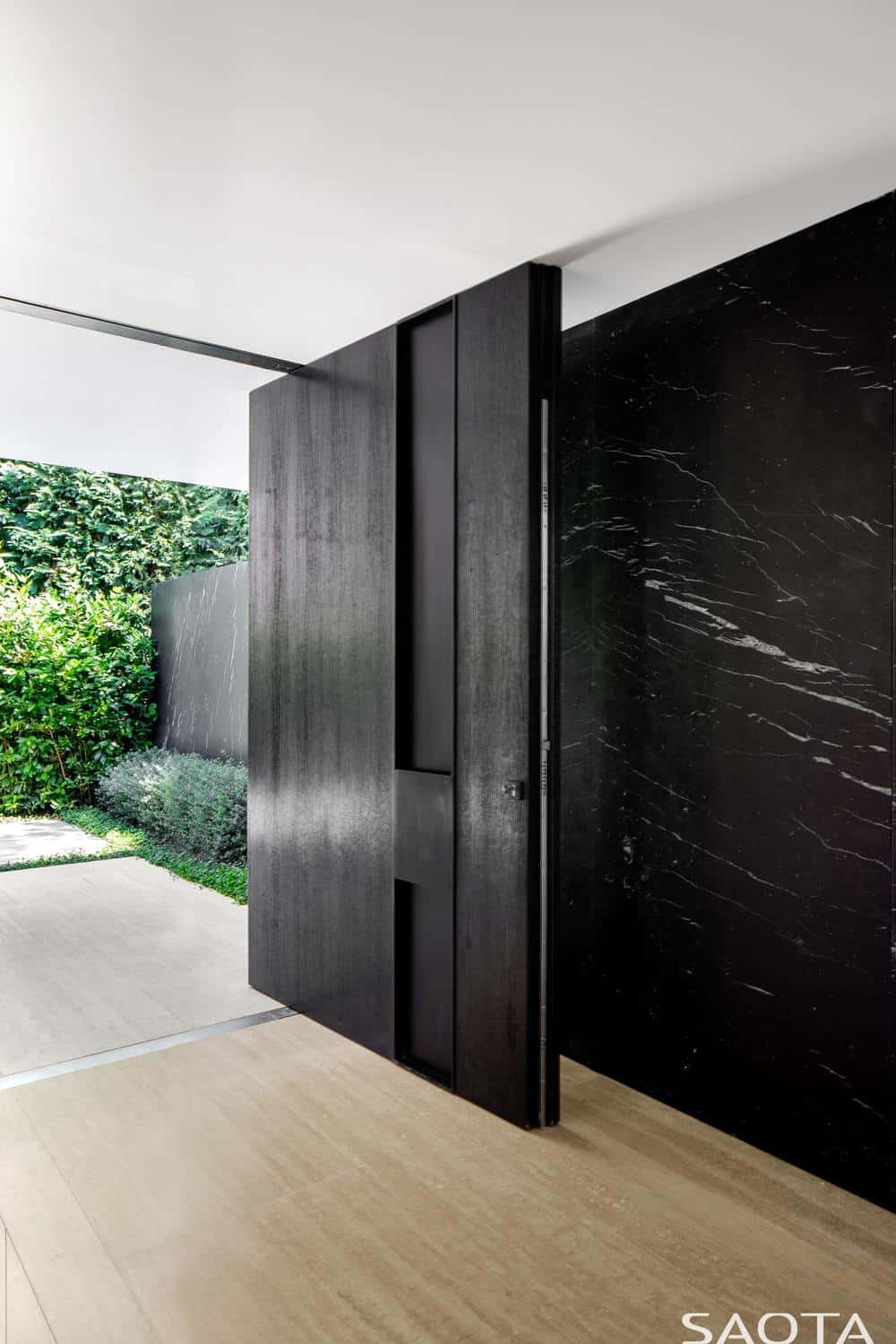 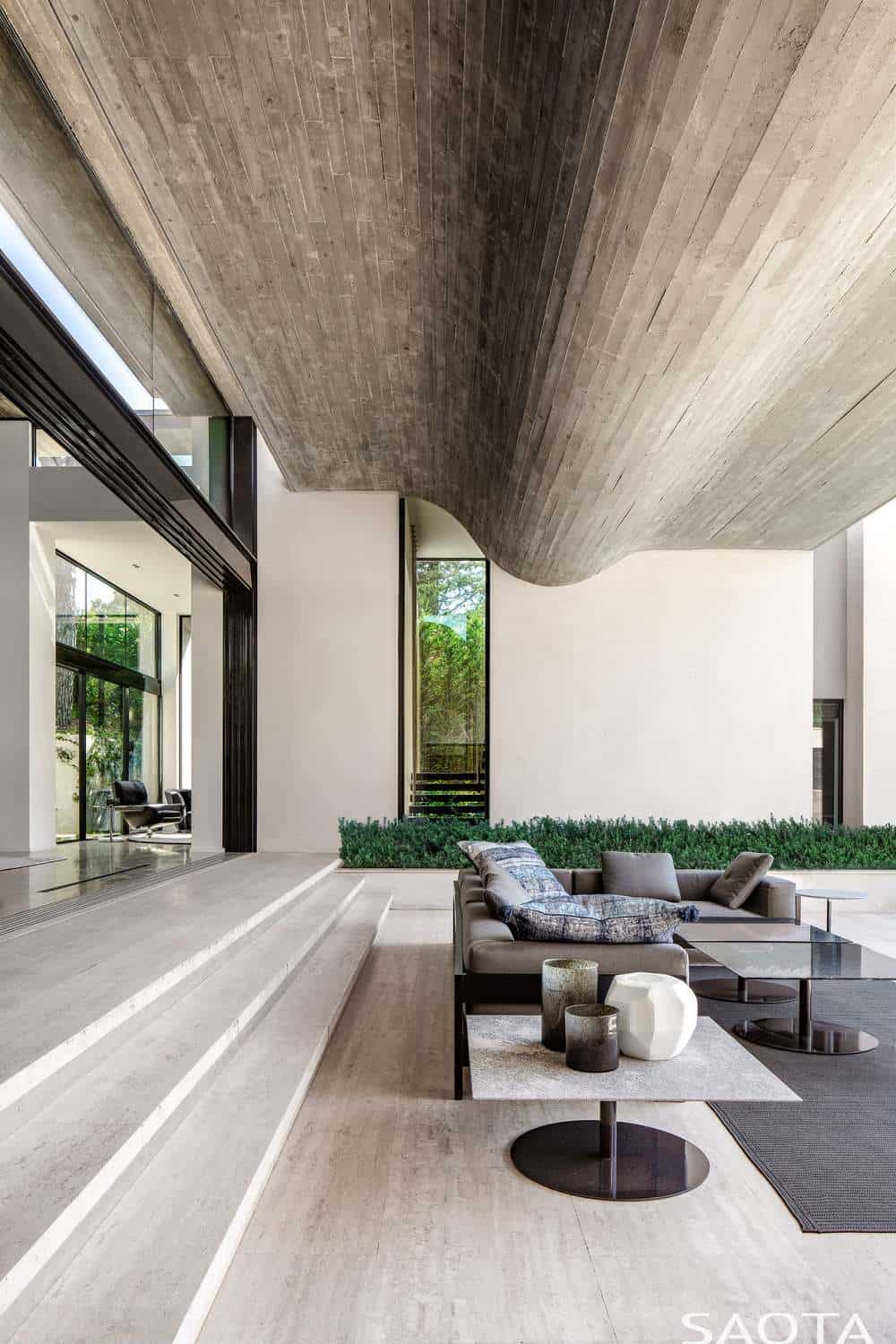 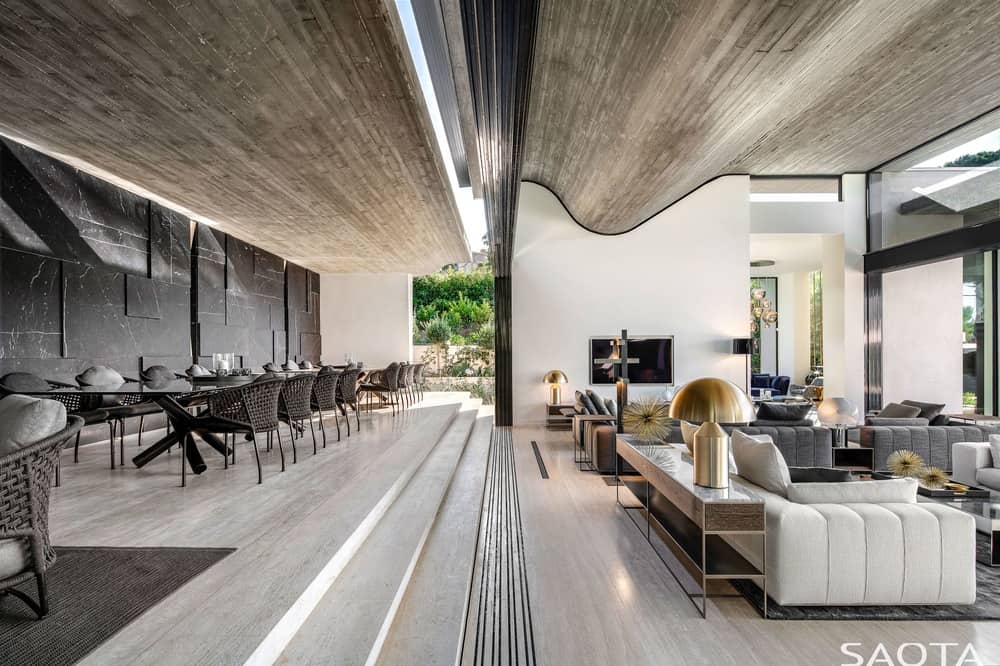 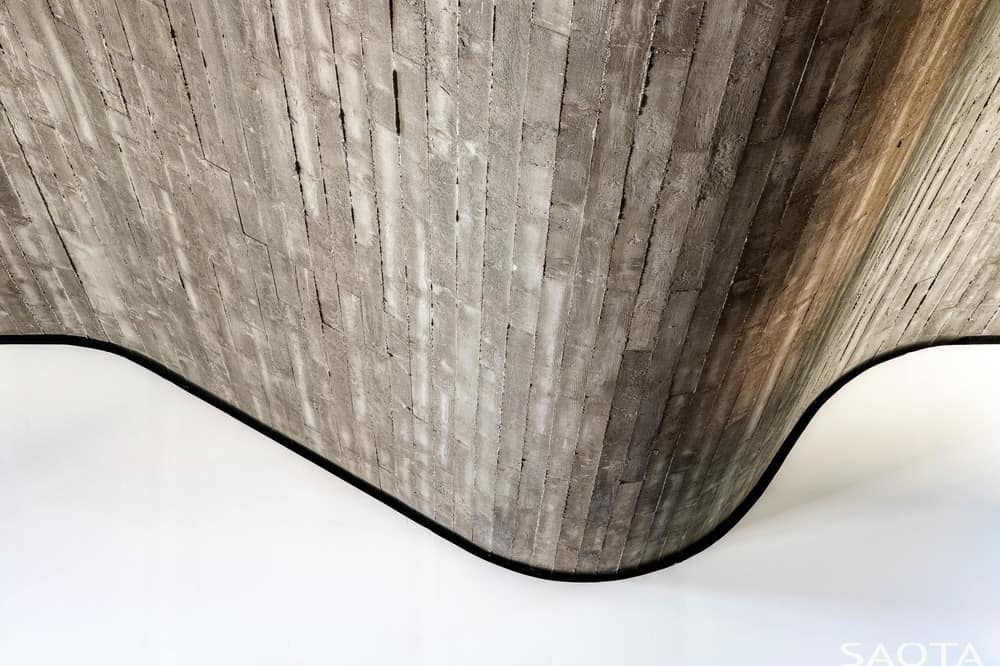 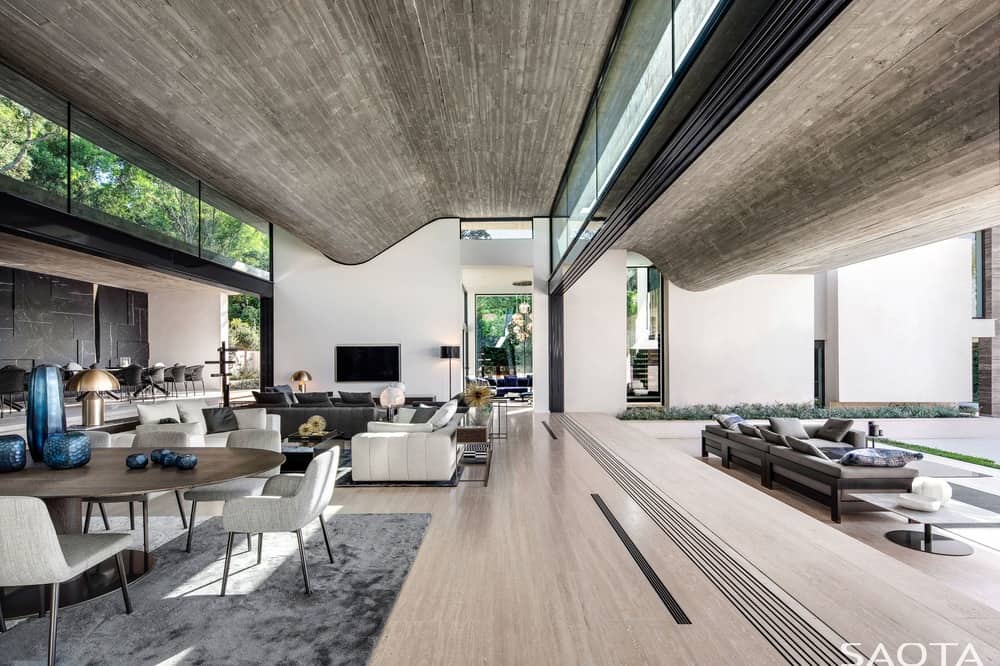 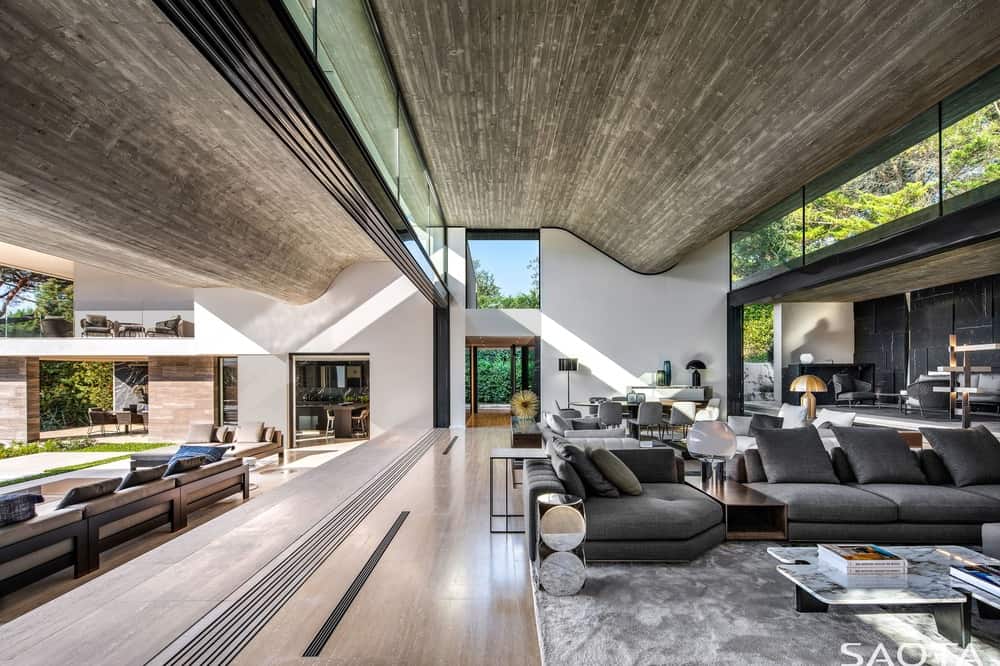 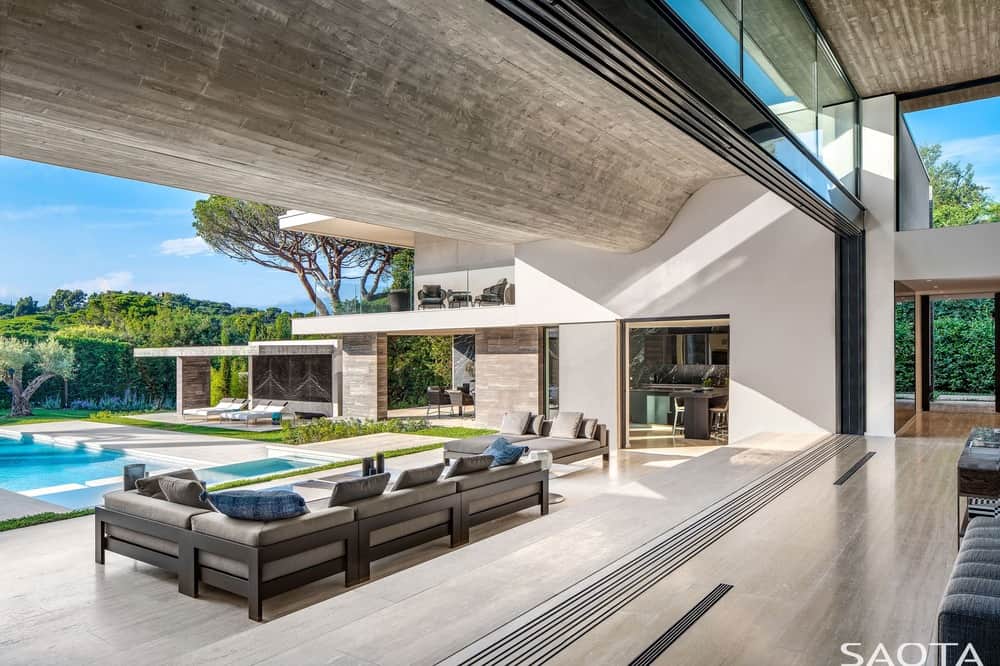 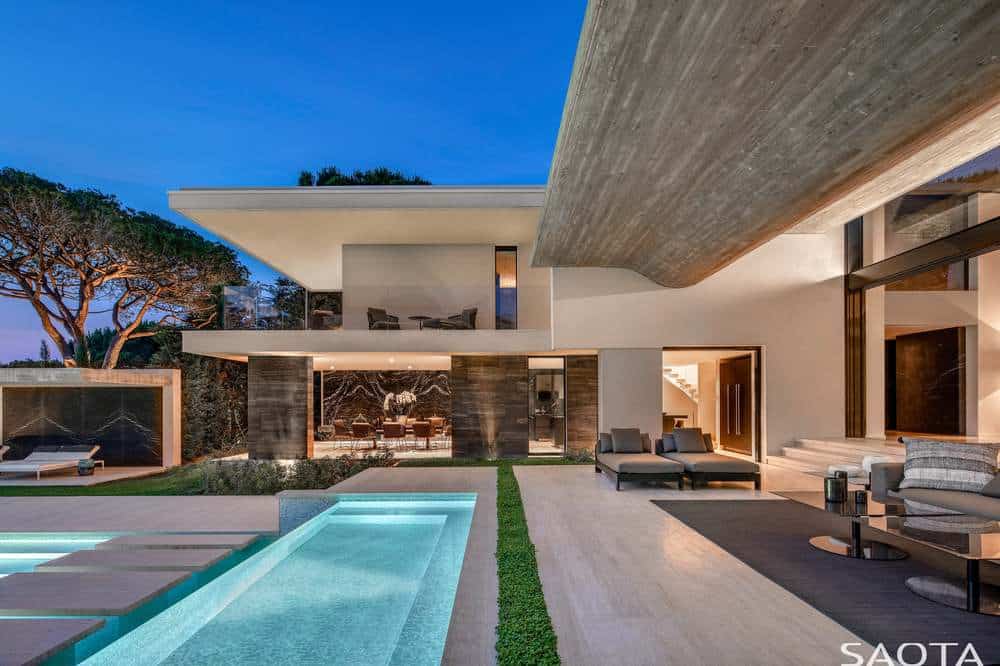 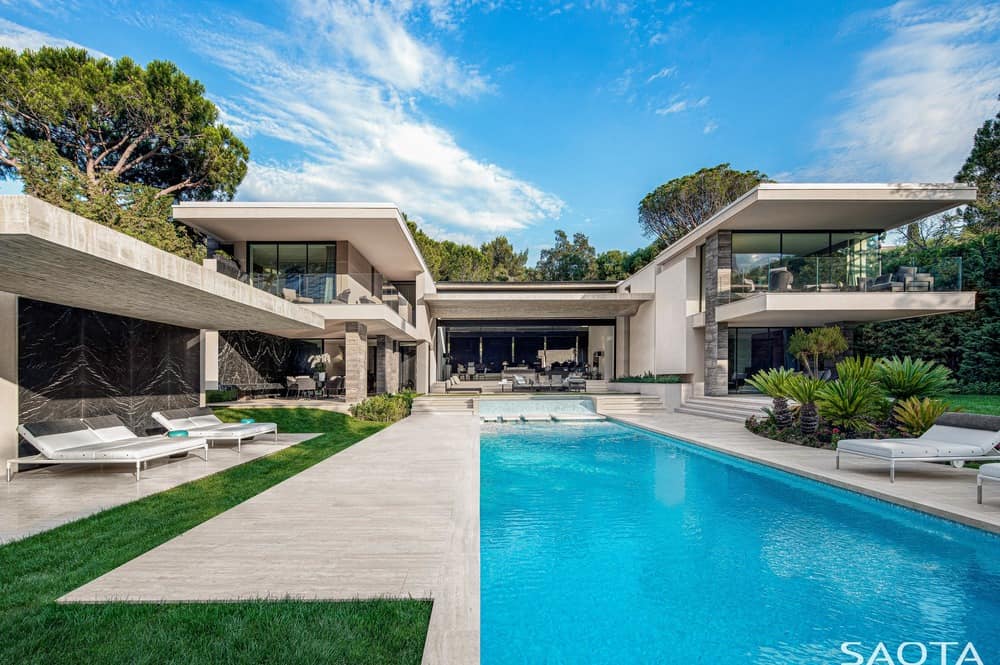 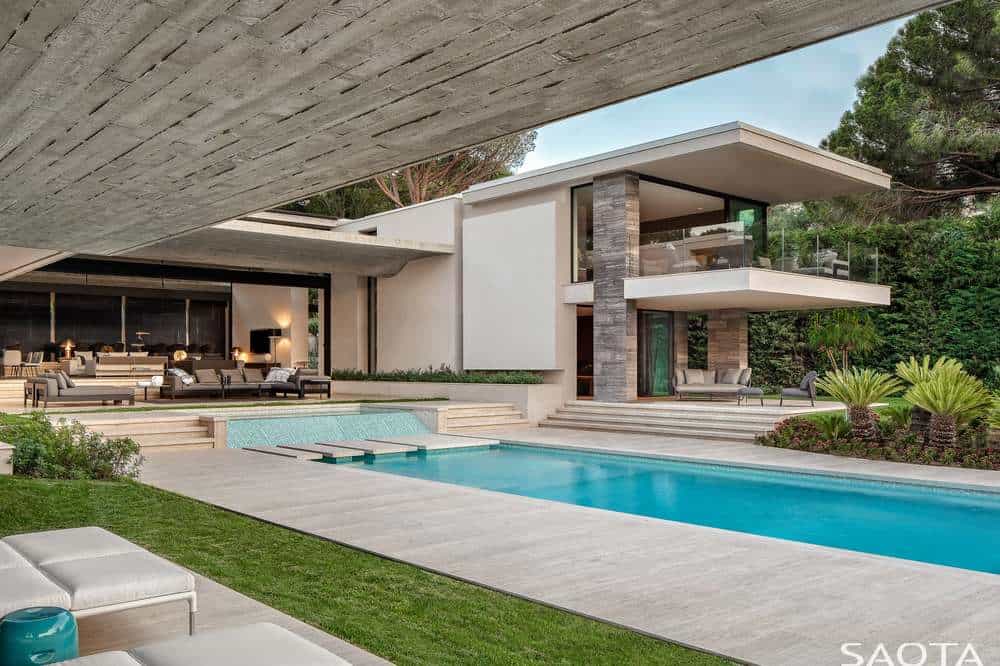 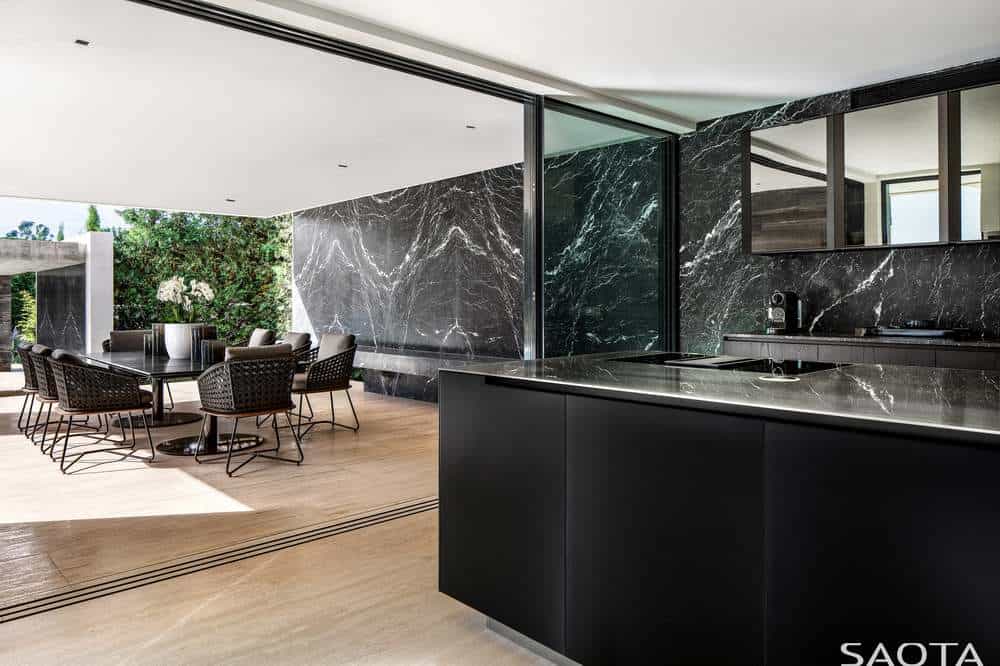 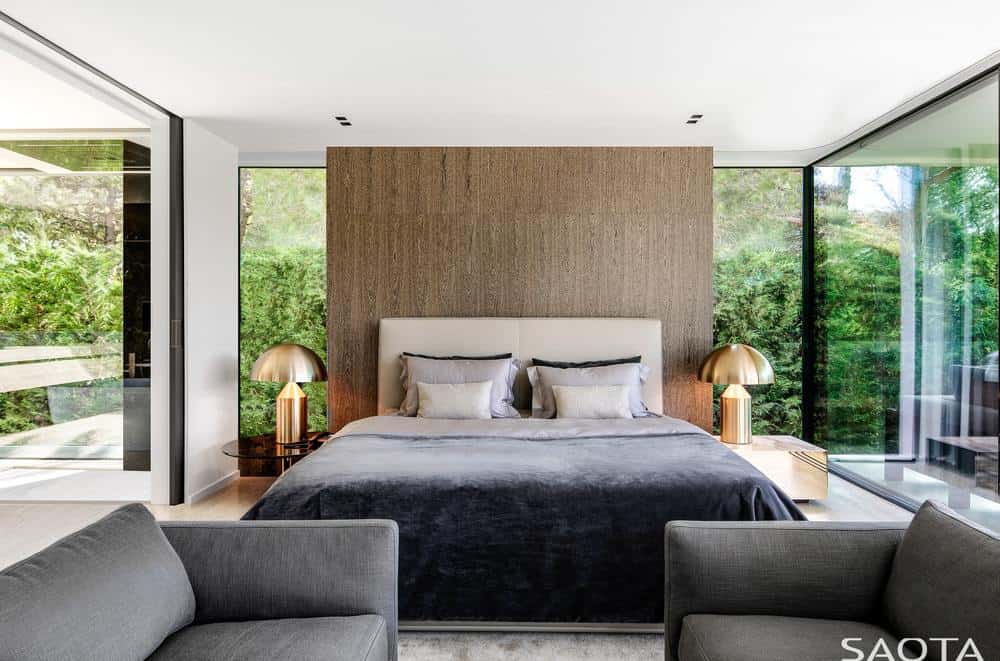 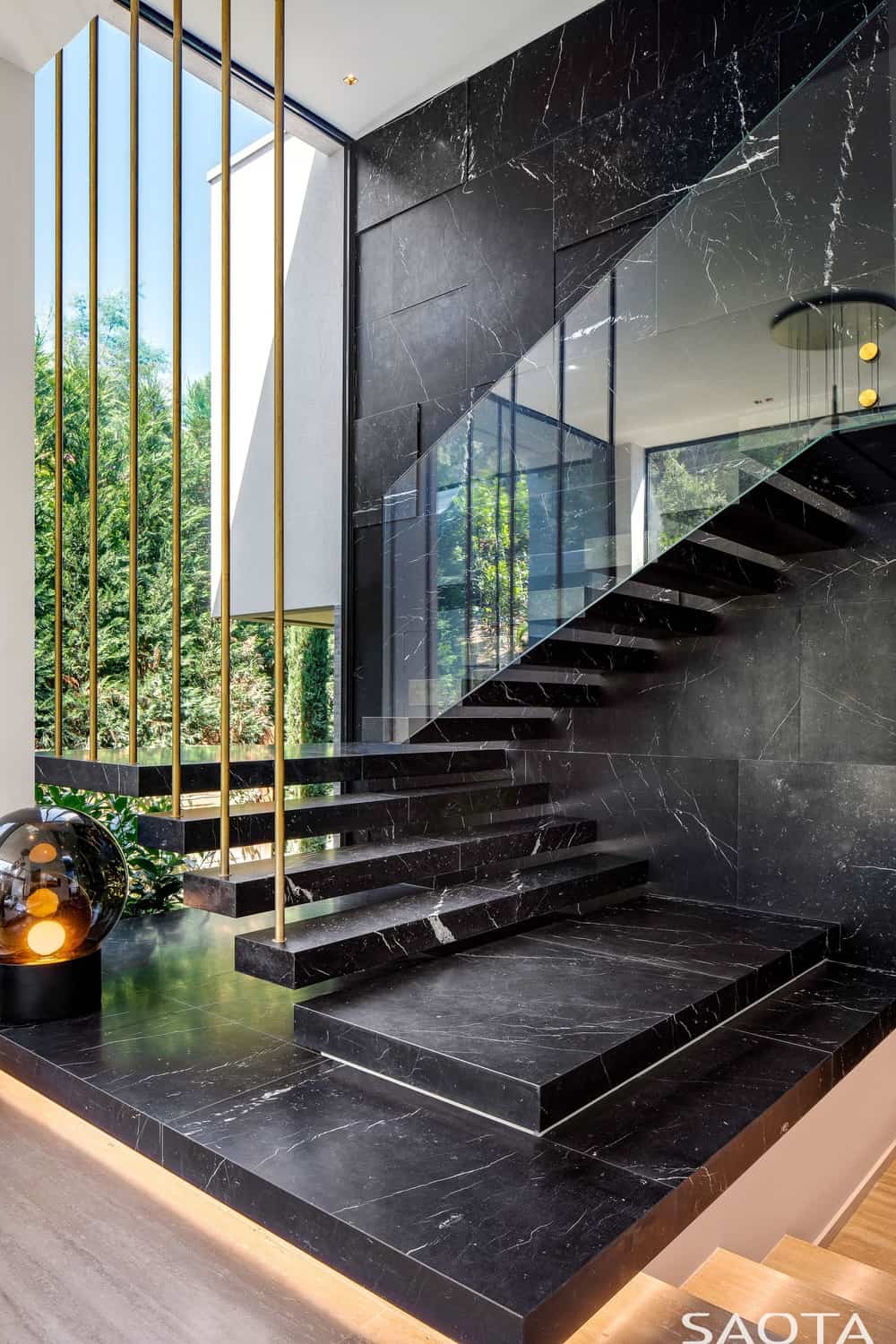