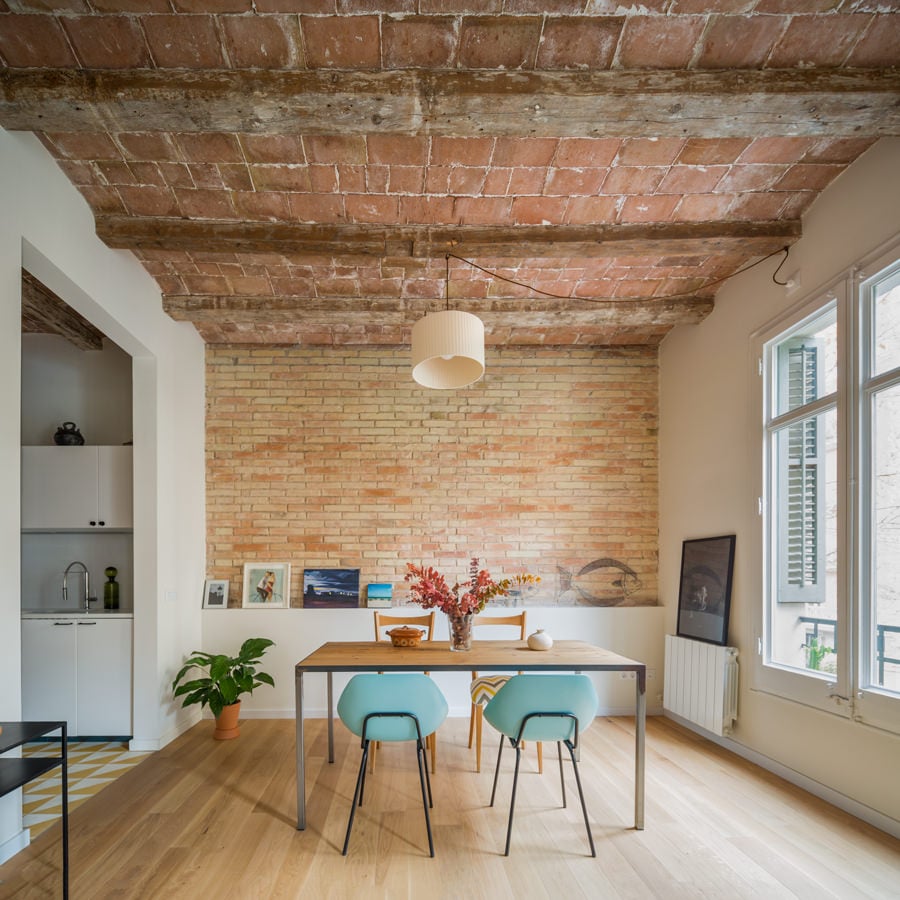 A century old structure turns into an explicitly magnificent overhauled dwelling in Barcelona’s Eixample District. With all the interior arrangements redeveloped, a more functional and ornate form was crafted – better than its original structure. The old construction of the house is still preserved though.

The chamfered façade has put this into one of the most constructive ornate homes in the location and it has situated the living room and the primary’s bedroom on the other end with a narrow way connecting the small and dim kitchen. The kitchen is the only accessible passage to the bathroom while the house has only one shower located in front of the third bedroom. The set up and distribution of the rooms were somewhat unideal for the house’ illumination and fixtures.

The reconstruction of the dwelling’s interior required some of improvements specifically on the kitchen and living room given the improved lighting and passageway due to the added vertical opening on their load-bearing wall in between them. The once kitchen area turned out as the main bathroom’s spot with a polycarbonate panel door, which helps in expanding the room’s natural view and lighting with its sliding panel. While the second bedroom and water closet stood still in its original positions with utterly amazing touch ups.

Additional arrangements were done, such as the mirrored walls for an outspread illusion to the surface, untainted wood flooring and tiled mosaic for the living room/bedroom and bathroom and kitchen, respectively. The natural tones of white, ochre and grey were also used to cover the entire house. Among this refurbishing, the windows were preserved and restored with lacquered paint and double glazed glass panels on the old single glass.

This project was done to further preserve the dwellings structure and let it adapt in the present’s modern living. 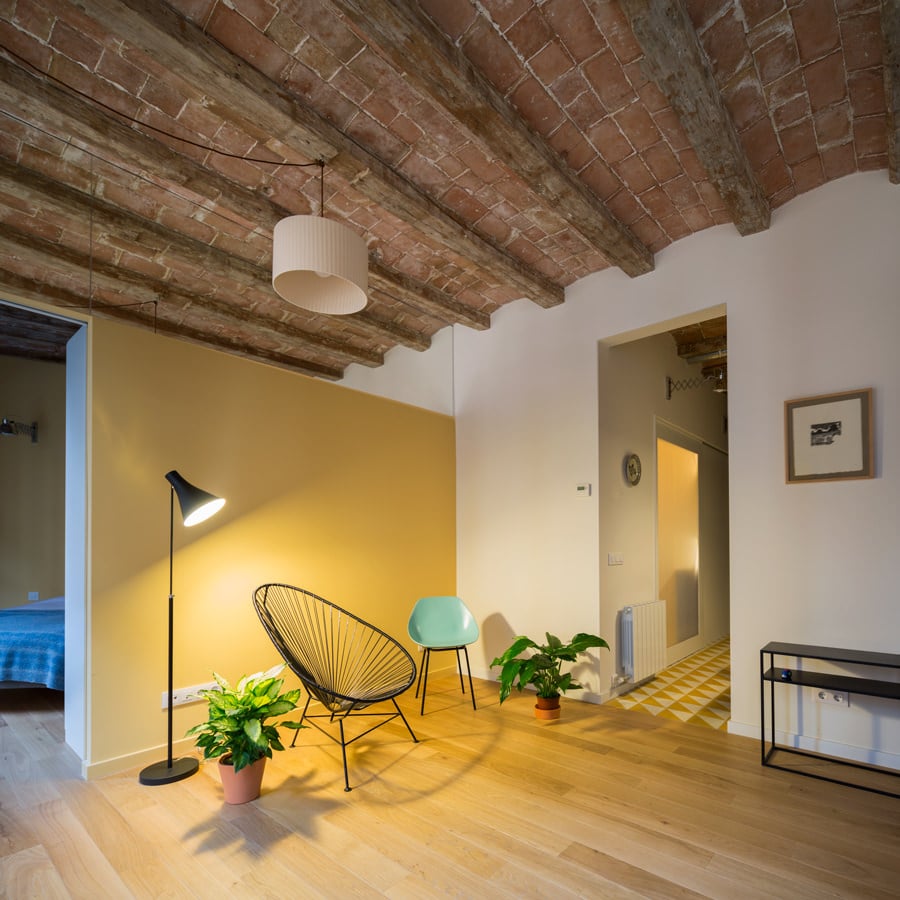 The untainted floor is indeed spectacular allowing the brick stone ceiling and perpendicularly designed wood beams to match on a comtemporarily designed look despite their traditional touch. 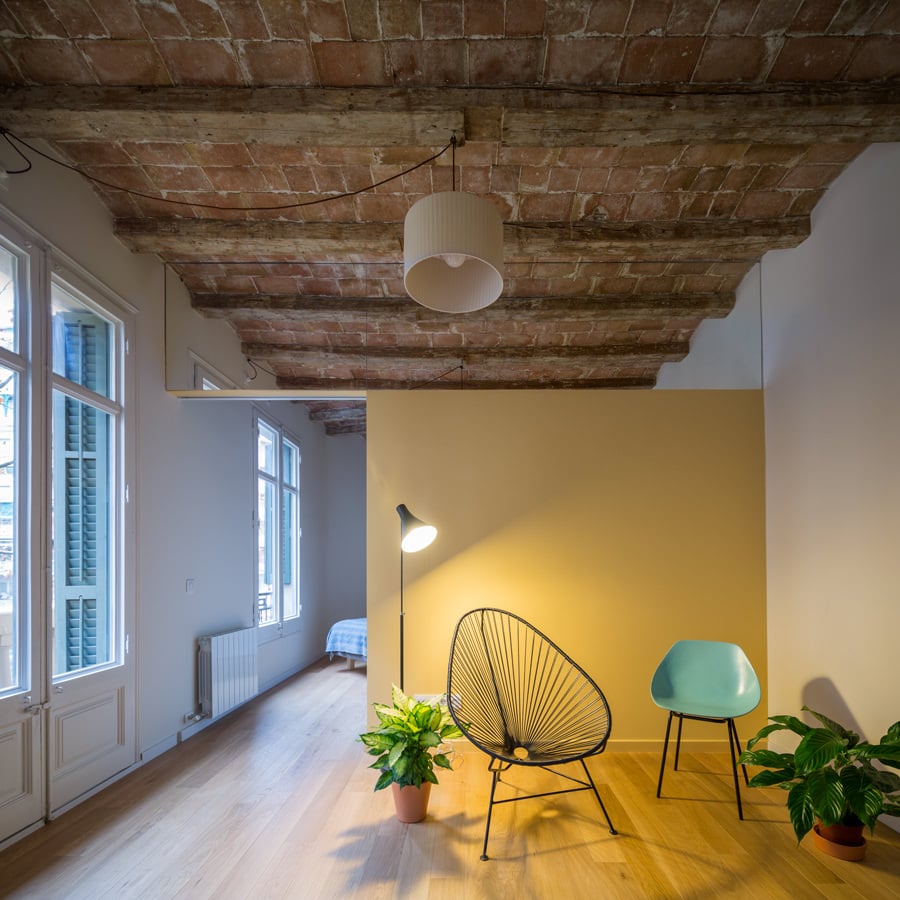 The lamp has been more functional to the living room’s set up and it does gives extra light to the passage way connecting to the bedroom. 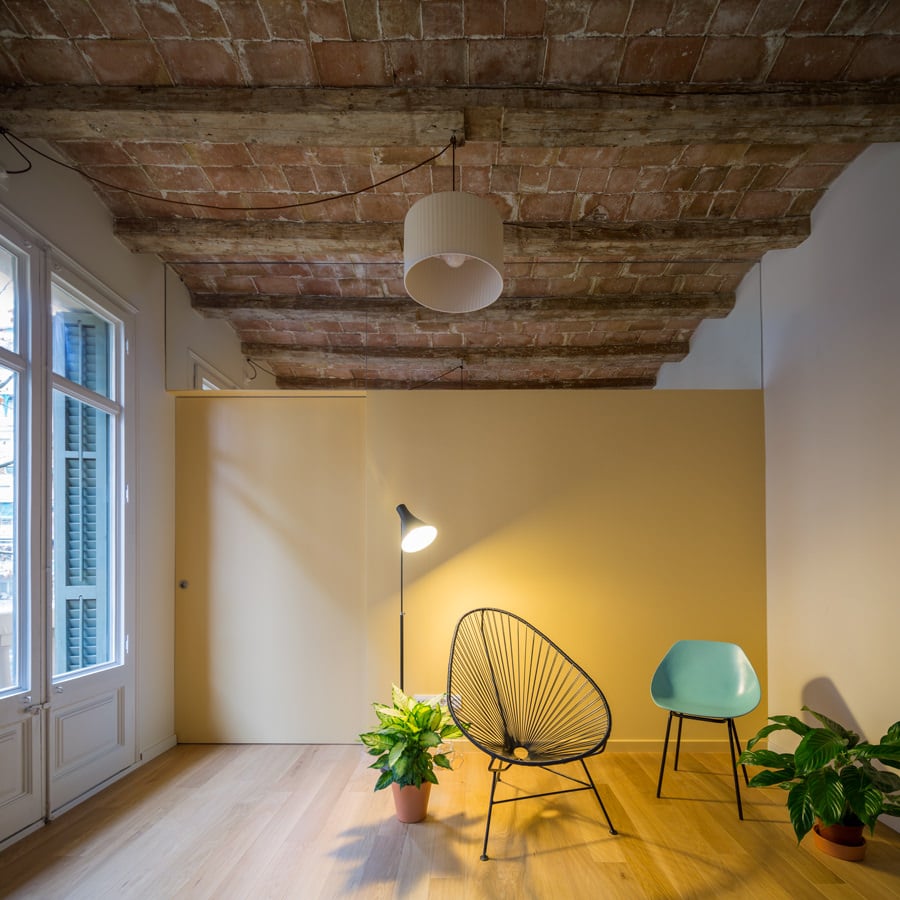 The touch of white and ochre walls are indeed illuminating, giving the space a cool and neat modern look despite the traditional touched ceiling. 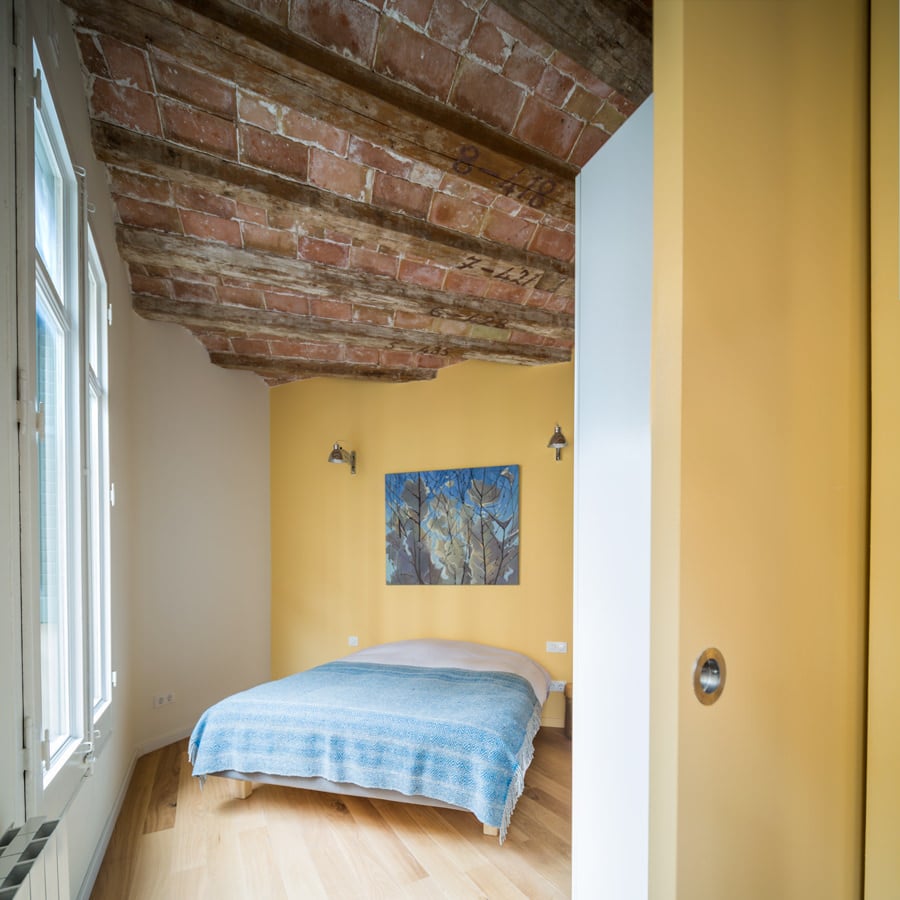 The chamfered ceiling is indeed a fascination to this house. The bedroom is designed at its most modest way showcasing a simple and neat space. 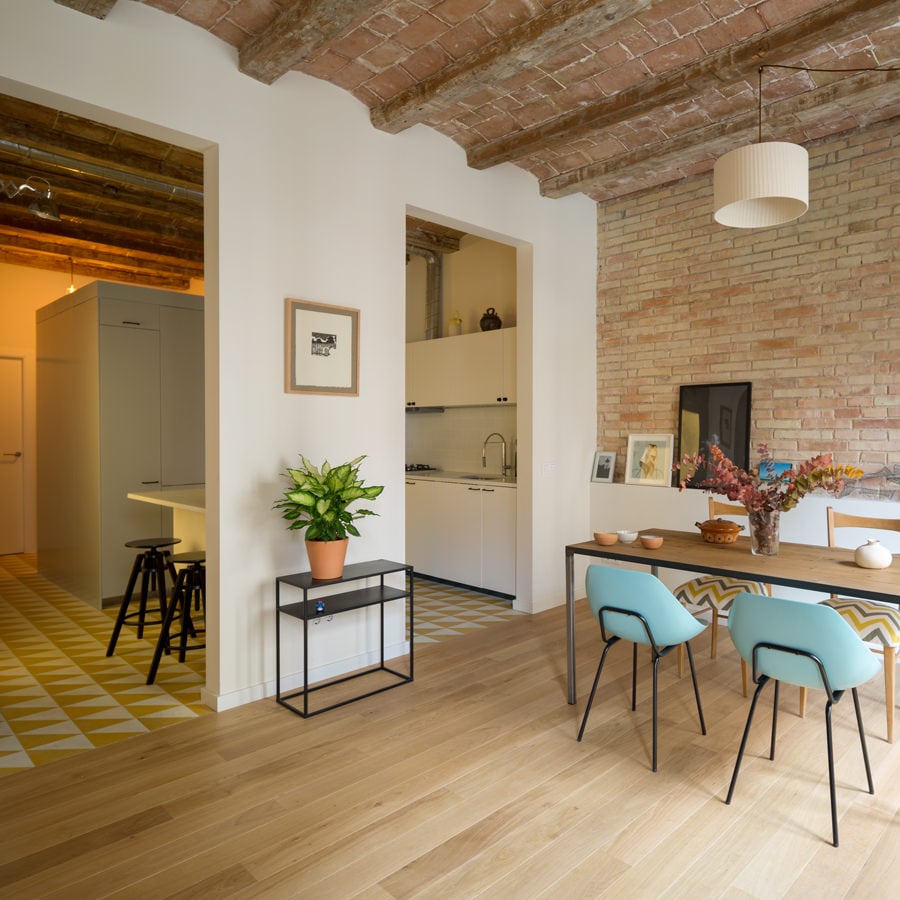 The dining area adjacent to the kitchen is quite accessible and stylistic with its cool wood palette and bright colored patterned floor design. The brick stone wall and ceiling preserve the interiors original construction. 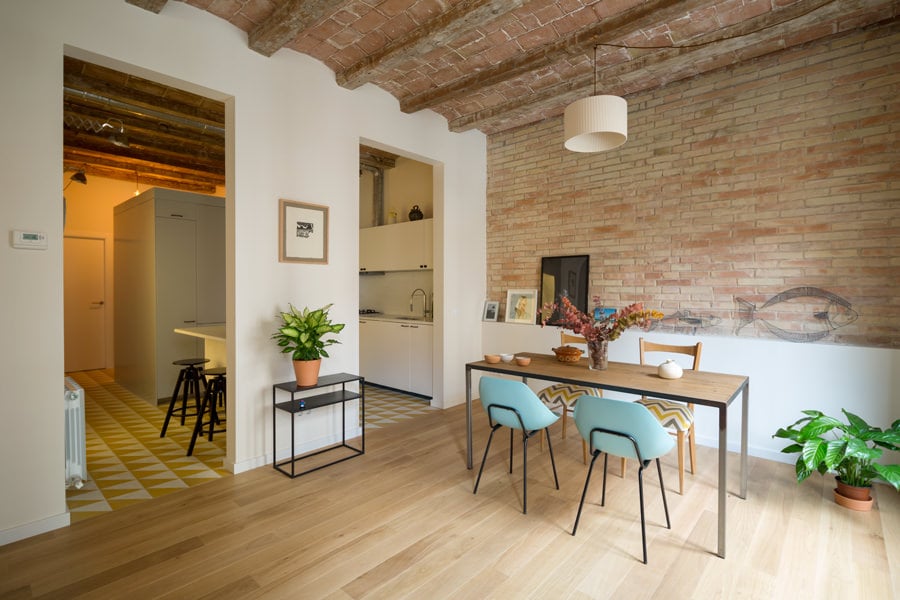 This newly renovated traditional designed wall and ceiling is hyped up on a modernized theme kitchen and dining room. 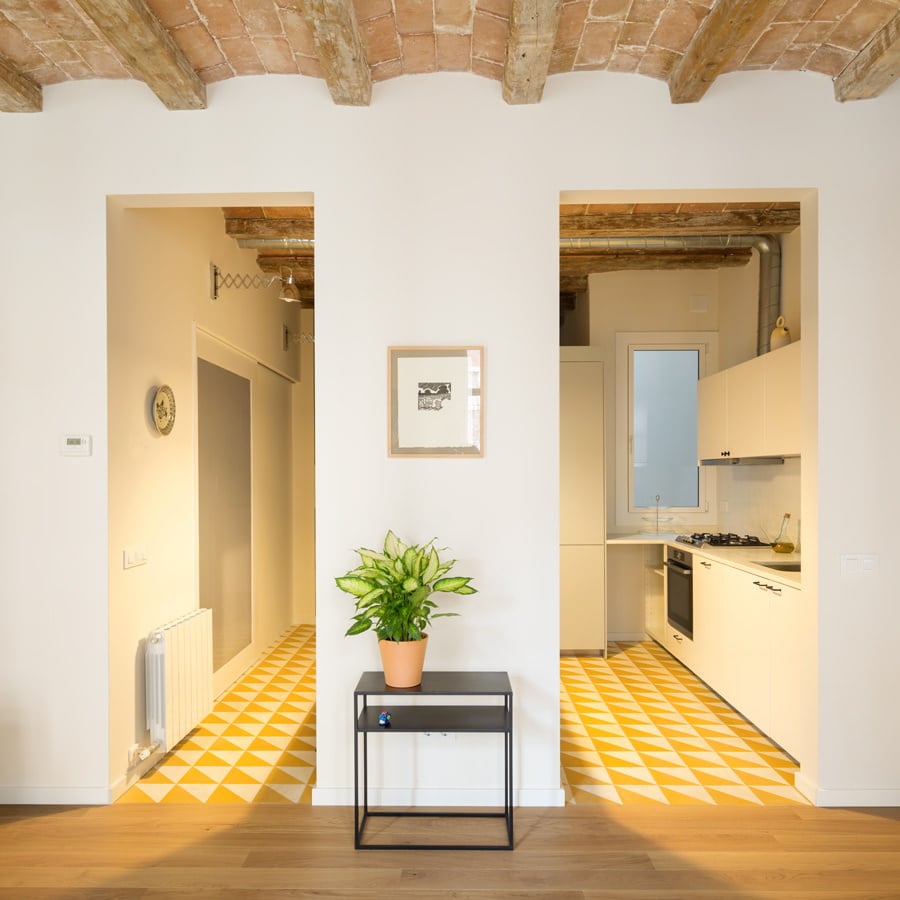 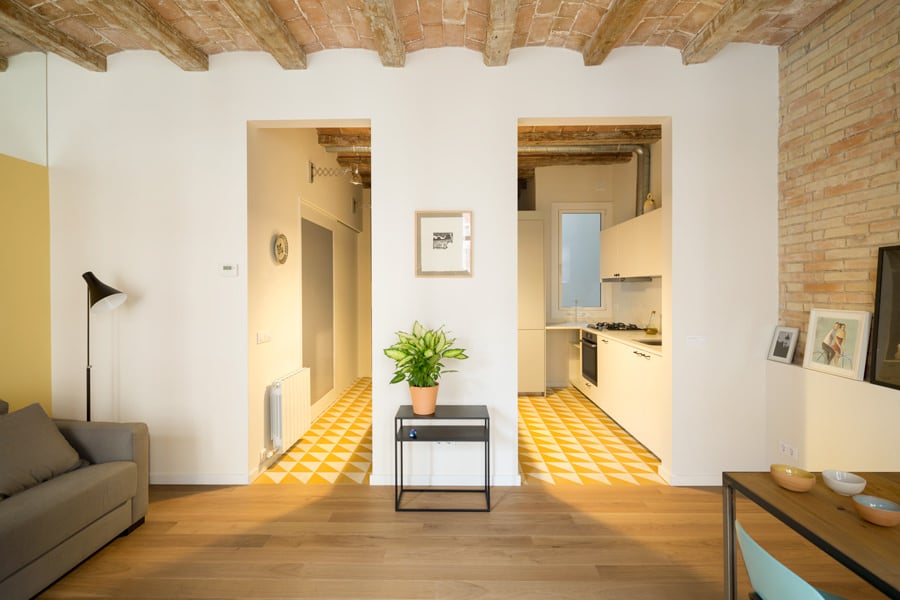 The living room’s new set up brought more functionality and accessibility to the kitchen and dining area. 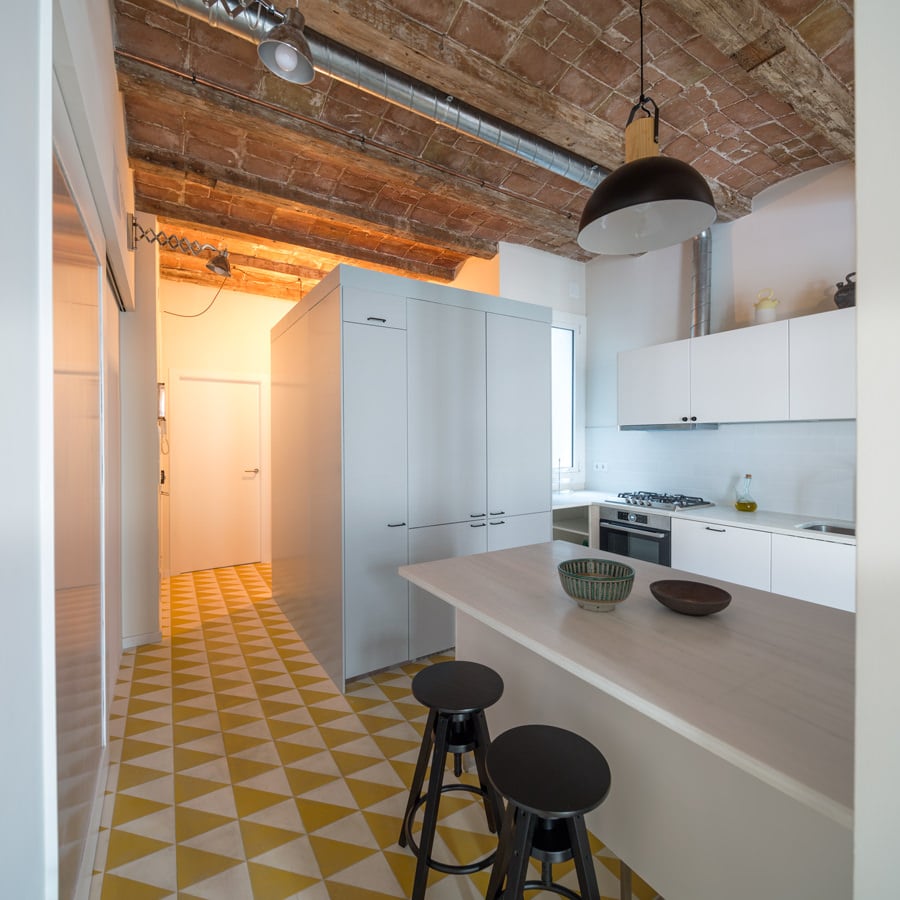 This is quite a space-wise idea as it has utilized the smaller space for passage way going to another door while the center part is assembled with a kitchen working table. 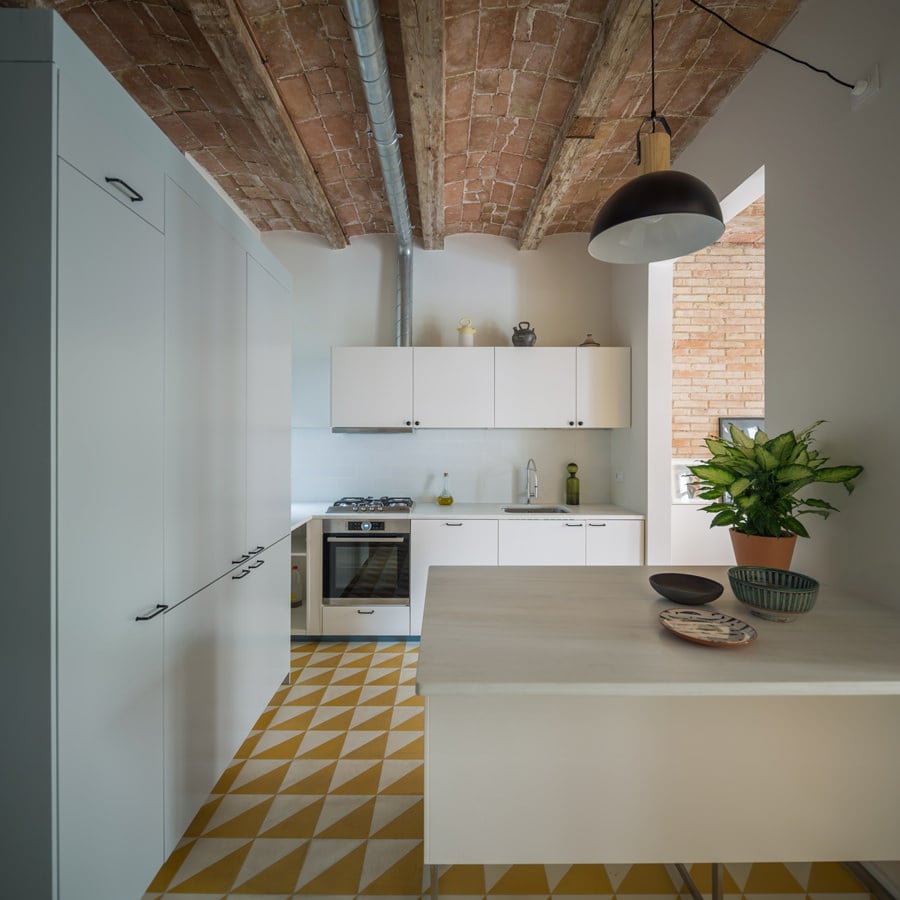 The floor to ceiling cabinet and storage is quite functional as this saves extra space for kitchen clutter. 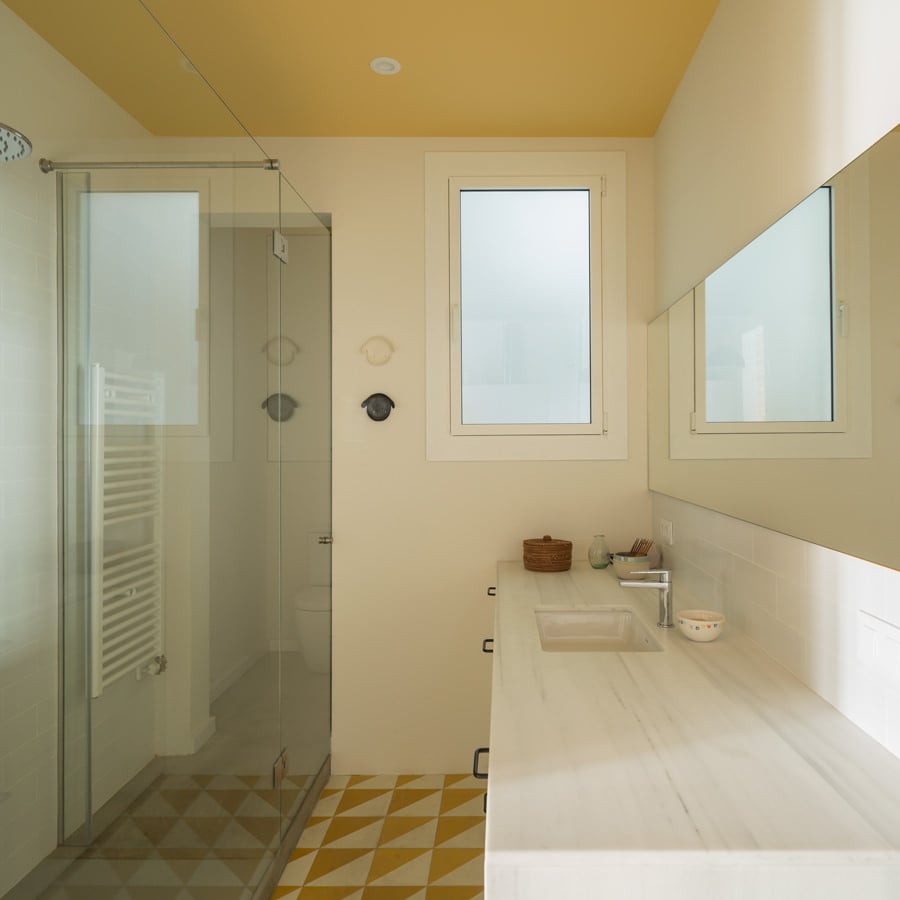 A conventional bathroom turned into a transitional and functionally styled one, with a working fixture and sink plus the sliding glass panel that saves space. 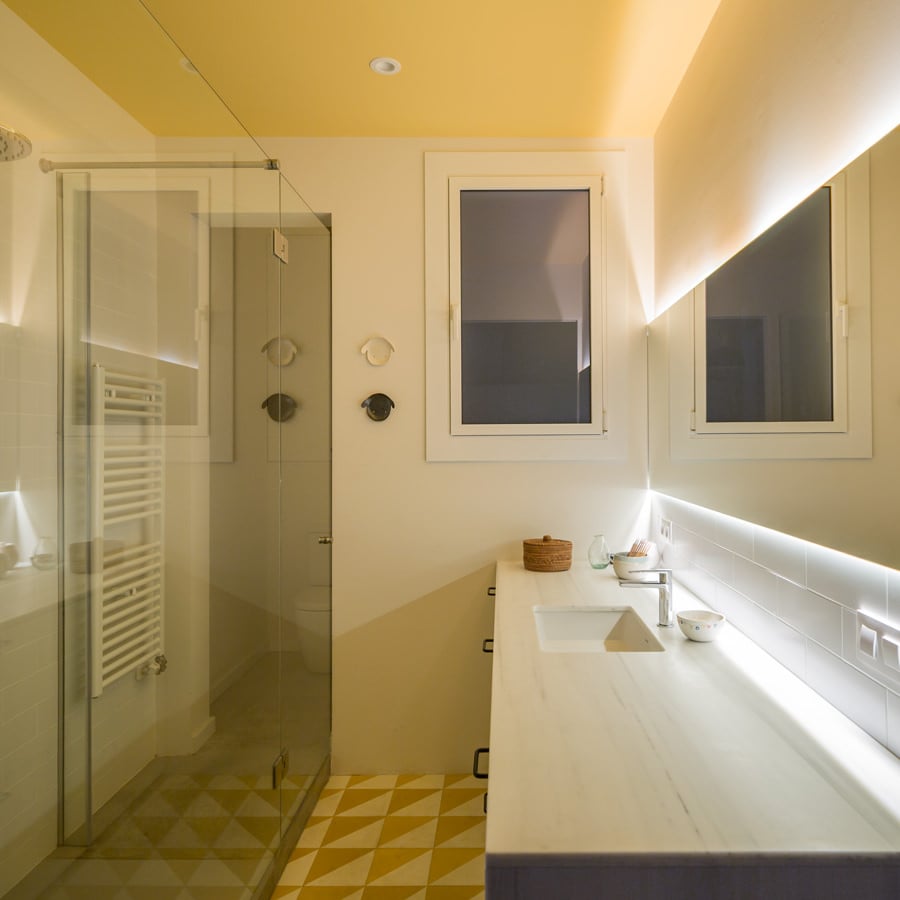 The lights installed on the mirror corners illuminate the entire bathroom at night. Moreover, the lights reflecting on the mirror provide an extra-bright bathroom. 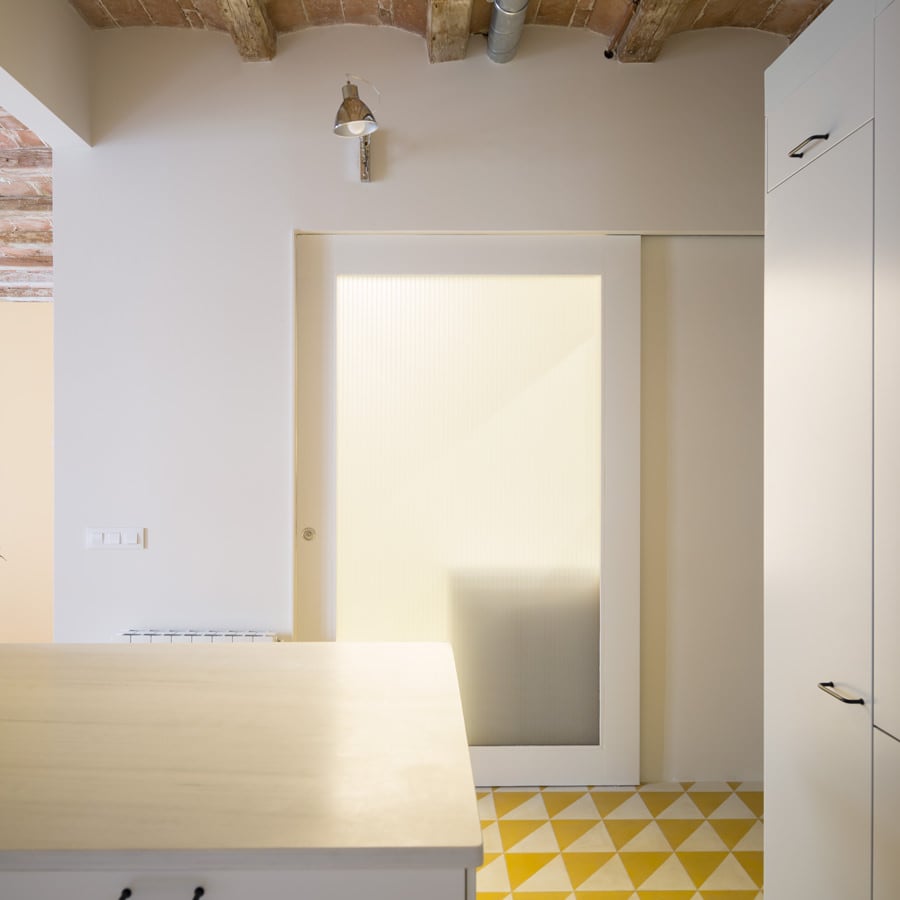 What else could give an added light and brightness to your space other than the polycarbonate panel door. The impact of the effect also glides through the white tints. 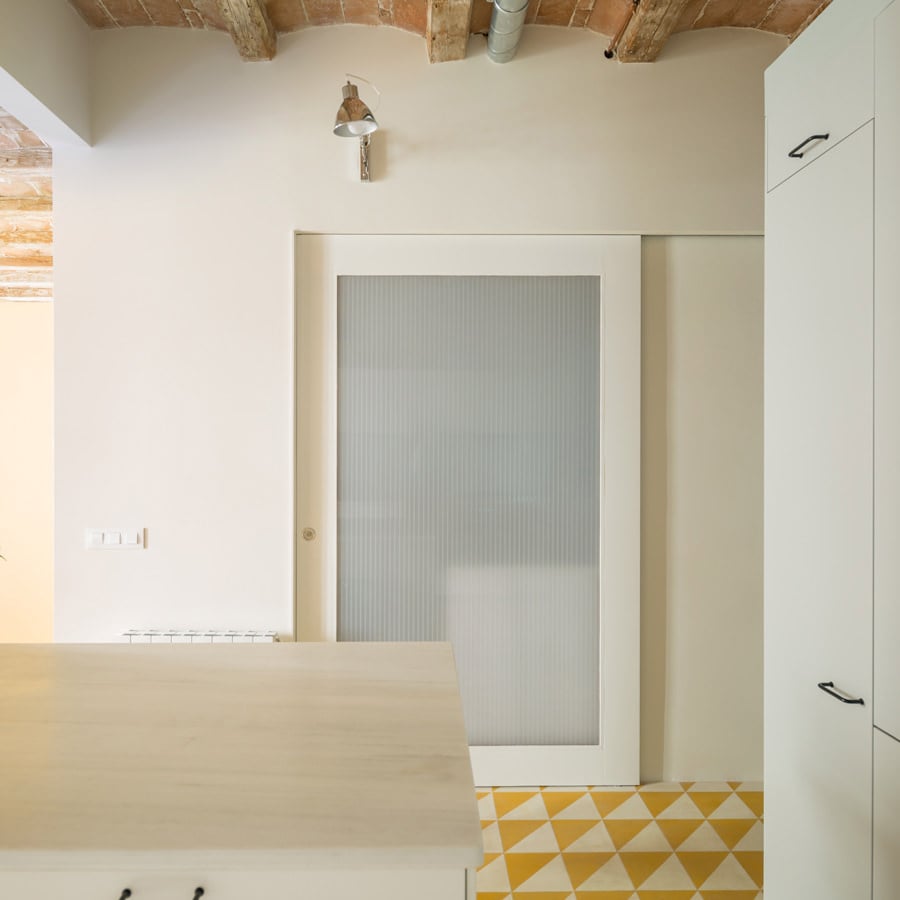 The polycarbonate panel door with daylight, matching the other white vanities and wall touches. 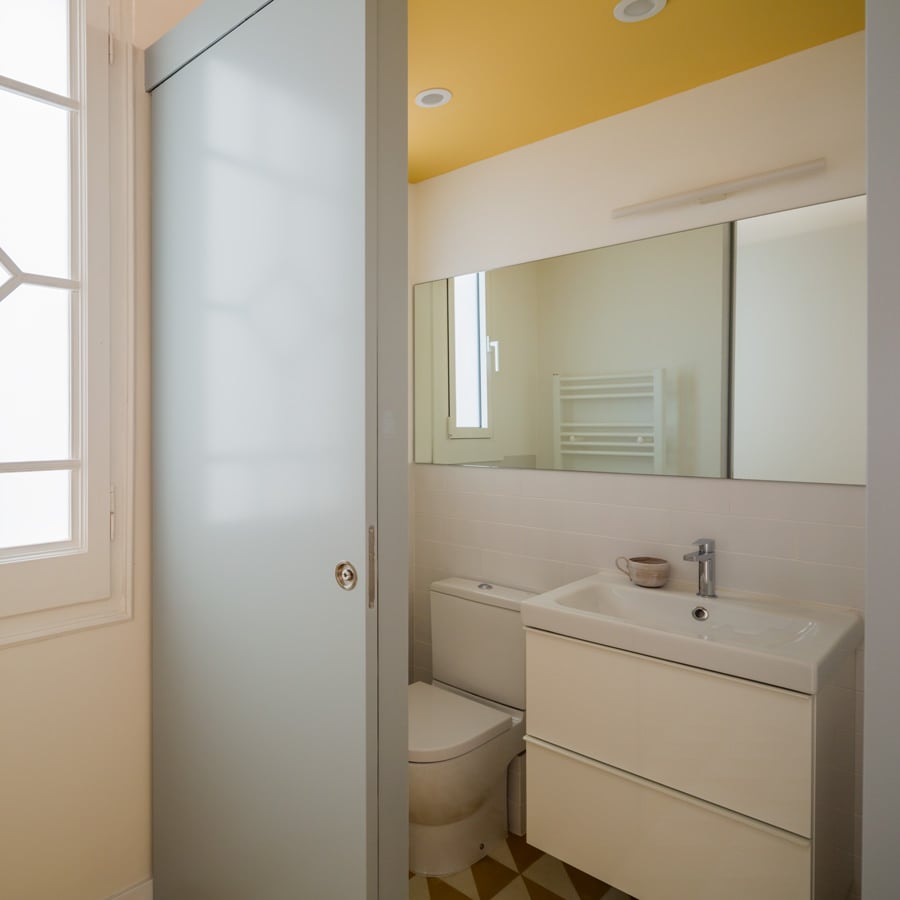 Compact restroom complete with a sink and storage underneath, while the toilet bowl rests between the sliding door and an extra wide mirror for an added space illusion. 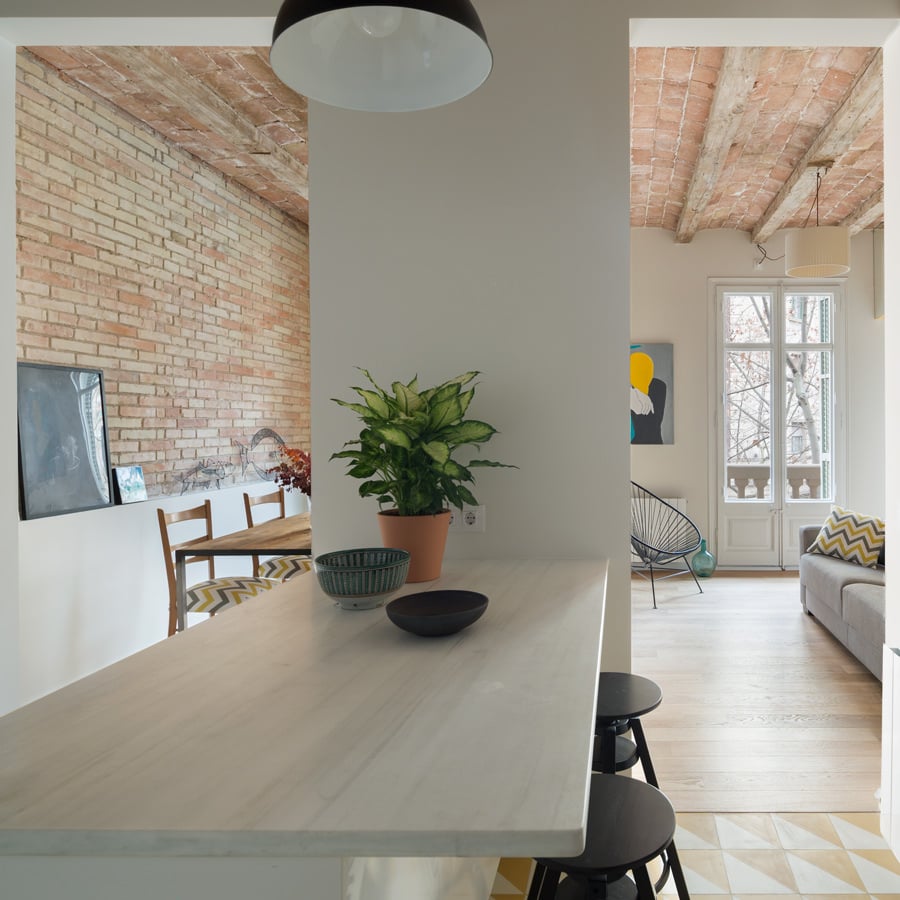 A functional kitchen working table hiding in between two passages from the dining area and living room.

The design turned out to be more brilliant and bright compared to its original version. The rustic brick wall and ceiling remains fabulously traditional though. 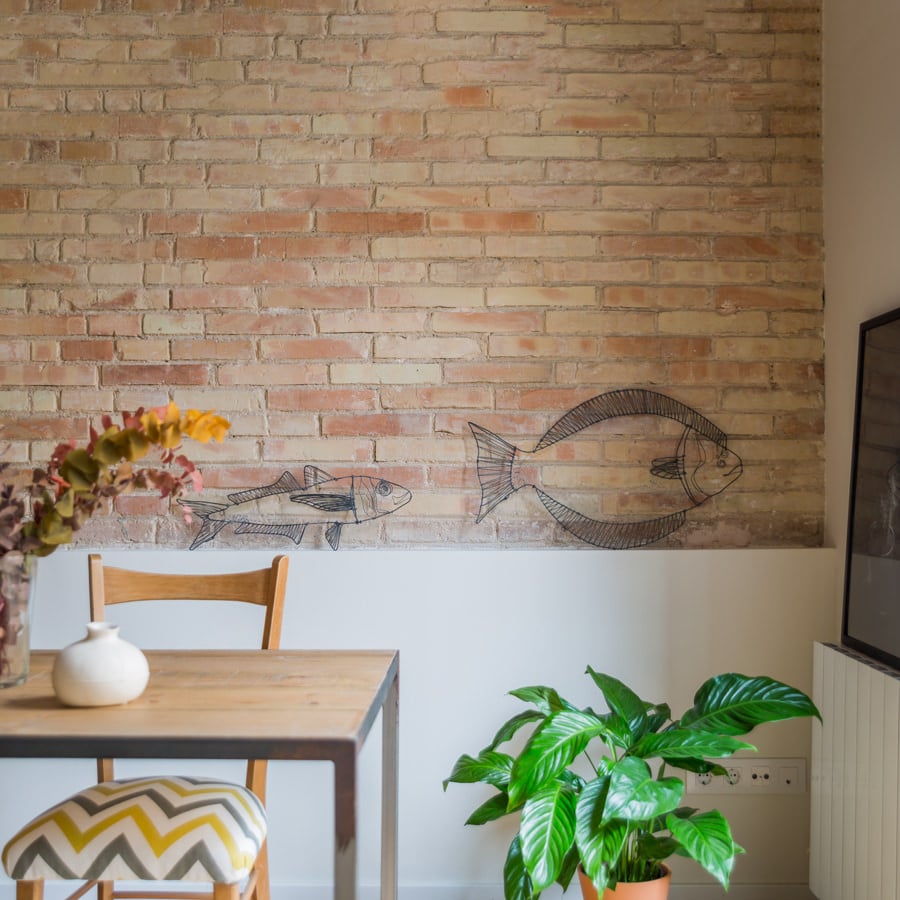 The rustic brick stone walling turned out cute and fun with the fish form sketches on them. 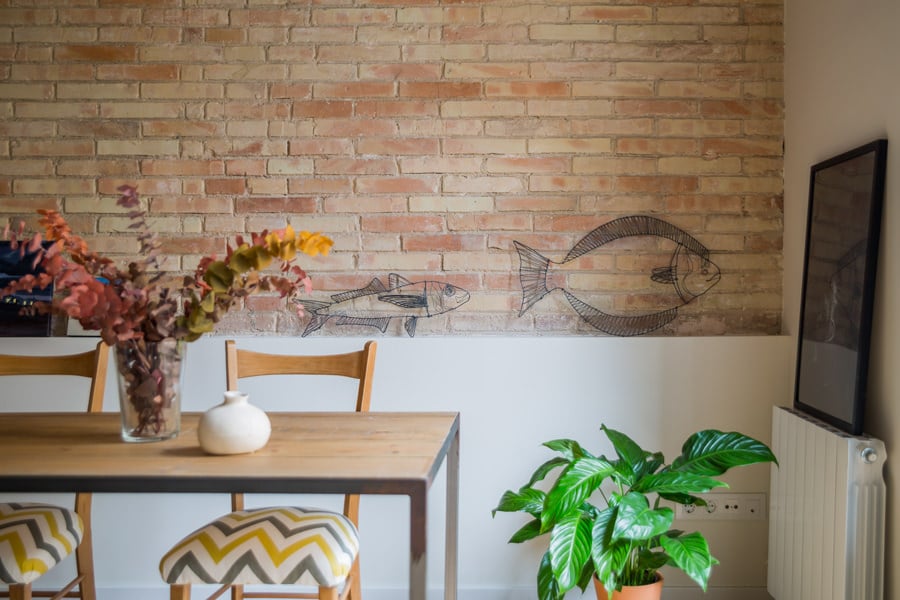 The live plants in pots and table top vase gives life to the rustic view of the area. The frames and pattern designs on cushioned chairs are add-ons to the plain touches of the color tones.