Discover 6 reasons rural living in the USA is on the rise. I think you'll agree there are compelling reasons for a small town life. 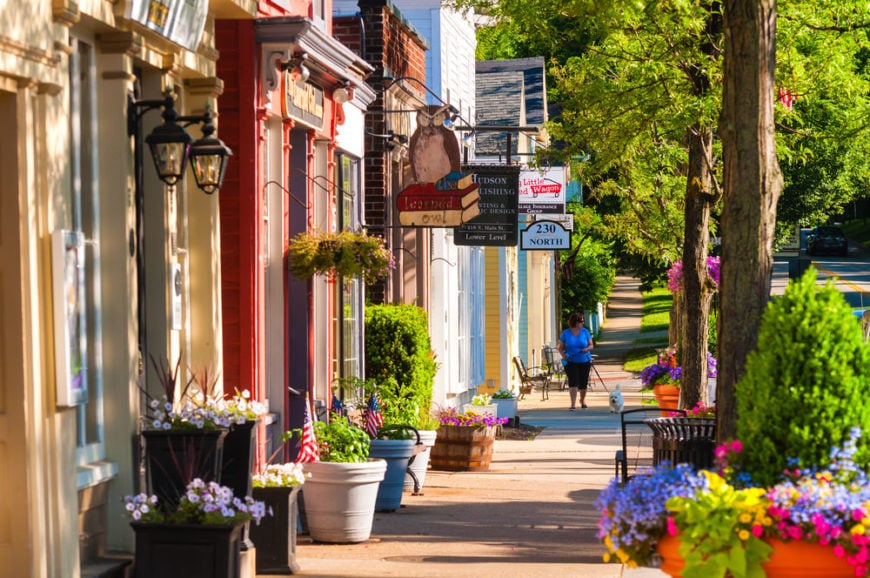 In 1999, while in between college and graduate school, I decided to take a 3 month road trip of the United States. I had a mileage efficient Honda Civic hatchback, a few dollars in my bank account and thought it would be fun to zig-zag across America staying in Youth Hostels along the way.

I had a game plan. Instead of hitting urban areas, I focused on visiting smaller towns. I like small towns and I enjoy visiting them. Looking back, making the trip about small town America was a great decision because it was so much fun checking out the very many different small towns in every region.

But what exactly is causing that?

We decided to do some research to get to the bottom of it.

We found 6 main factors resulting in the increase in rural living.

6 Factors as to why rural living is on the rise

If you compare the way that American’s chose to live 50 years ago to the way they do today, you will be startled to find out that there has been an incredible shift in our preferences when it comes to rural living and urban living.

In 1953 there were a total of 54 million people living rurally (which made up 36% of the population). Rural towns were identified as being those with surrounding open countryside and towns that were made up of fewer than 2500 people; however, this was not to say that they were living on farms, as the 1950 census revealed.

Fast forward to the present day and you will see that the rural population is rising, with 59 million Americans (that’s 21% of the now much larger US population) opting for a life in the country and in smaller towns. The change we are witnessing in the USA is also reminiscent of other parts of the world, too.

Fenn Wright (a letting agent in Sudbury in the UK) are also experiencing an increase in demand when it comes to people choosing to live on the outskirts of big cities like London. So, what is causing this significant shift when it comes to choosing a rural lifestyle as opposed to an urban one?

While in the past it was commonplace to associate rural living with farming and persons on the lower rungs of the income ladder, over the last 50 years this stereotype has become less prevalent.

Of course, rural poverty exists in some areas (as it does with urban ones), but there is a far more enriched and diverse economy than we might have expected 50 years ago. Local economy has improved and amenities typically associated with urban living have become more available in many rural areas, which means that living out in the country does not require you to sacrifice niceties.

Many property owners today want to find homes away from the stresses of city life that allow them to maintain a modern and fruitful lifestyle. As a result, there is a greater attraction in the present day to move to the country, which offers them almost exactly what they want.

Perhaps one of the reasons why we are seeing larger numbers of people being placed into the ‘rural living’ bracket is because The Census Bureau now offers a different measurement when it comes to identifying a ‘rural’ location.

The modern definition of a rural location is one that lies ‘outside of urban clusters’ of 2500 people or more. This definition also takes into account the population density in any given area which has caused there to be a significant re-classification process in parts of the US that is less densely populated.

In contrast, an urbanized area is now identified as one that has at least 50,000 residents living there and is spread out to county lines so that fringe counties are also included. With that being said, 46% of rural property owners still live within metro areas or at the very least within close proximity to metro areas.

This allows both rural and urban living individuals to have access to urbanized jobs, services and amenities. Living in a rural place now no longer means being miles and miles away from sprawling cities. Now you are able to experience the best of both worlds, with access to both the city for work and the countryside for raising a family.

Another shift happening in the United States when it comes to the increased appeal of rural living is the fact that ethnic and rural diversity is no longer only attributed to large cities and the west and east coasts of the country.

Demographers have created a type of classification equation that allows us to see the diversity of ethnic and racial variation of both urban and rural environments. Essentially, when more people from various ethnic and racial groups are found in a community and the more equal in size these groups are, the more diversity you can accredit to the area.

As a consequence of this, the USA has seen an estimated 98% rise in diversity rates in metropolitan areas and a 97% rise in smaller cities of America since the 1980s. This has also been evident in rural locations, with nine out of ten tested rural towns witnessing an increase in diversity levels between 1990 and 2010. Between 2000 and 2014, studies saw an incredible increase in diversity in locations across America, which has been helping to eradicate the generalisation of rural areas being culturally undiversified.

While some rural locals commute into cities for work, others are able to make the most of their surroundings. For example, millions of people have benefitted from finding work in manufacturing and have even been able to create new modern businesses in areas which were previously devoid of contemporary career opportunities, such as tech and digital media.

The growth in the number of casinos across America is said to be a contributing factor to the surge of American s migrating to more rural areas, as people are able to access urban forms of entertainment in a different setting.

In 1987 we saw a brand new federal Indian gaming rule passed which saw casinos being built in rural areas. The 140 rural casinos built since this law are spread out over 23 states and are able to provide not only employment for the local communities, but also develop the tourist trade. The knock-on effect of an increased number of rural casinos has meant that new opportunities for creating wealth have been and continue to be established.

Something that is proven to have massive appeal when it comes to relocating to a rural area is the fact that the overall cost of living is significantly lower. From grocery shopping to purchasing land, rural areas offer more for your money in almost every aspect.

In 2015, the median monthly housing costs for rural property owners was almost $300 less than property owners living in urban areas. When it comes to establishing which way of life will be the best option for you, it is important to weigh up how important the quality of life is in relation to the amount of amenities and work opportunities there are in the area.

It is not purely by chance that we are moving more towards a rural way of living. There has been evidence of some rural communities taking actions in the push growth to increase the rate of development but also to allow for there to still be a distinctive rural feel. Here are just some of the ways in which this is being pursued:

While doing research we read about many towns and rural areas experiencing growth, which of course is a bit ironic since too much growth will push them from being a small town to a large town or even small city. Nevertheless, we thought it would be fun to include a list of the 10 best rural towns in America as indicated by their fast growth rate.

The desire to live away from busy cities is set to become a continued feature in the future of America. If you are interested to know which rural counties are experiencing growth in population count and are flourishing, take a look at the following top 10 fastest growing rural counties:

These have been compiled after consideration for the quality of life they provide, alongside offering value for money and their future prospects when it comes to commerce.

So what does the future hold when the trend of moving to the countryside is likely to continue? The continuation of this trend is expected to encourage not only an increase in productivity in rural areas, but also encourage new jobs (and new types of jobs) and a continued pursuit to preserve and protect the natural landscape.

There is also set to be greater innovation, new exports and growth of industry start-ups occurring in rural areas. It seems that the previous stigma and stereotypes that caused many people to avoid settling in small rural towns has been turned on its head, which is why we are experiencing the shift towards a more county-led lifestyle.