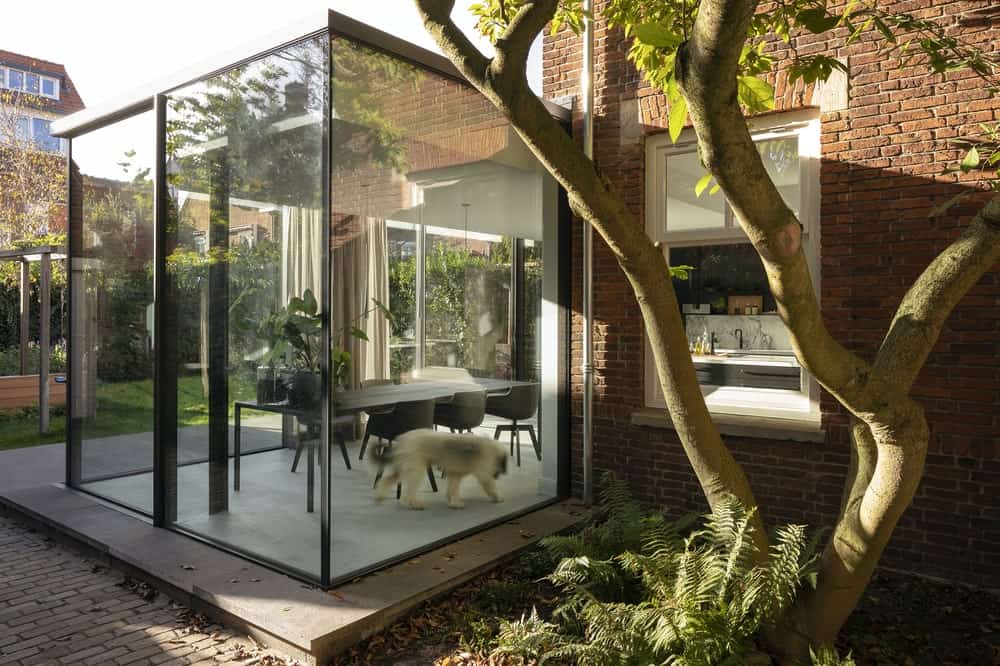 In The Hague’s Vogelwijk district in The Netherlands, a minimalist house extension contrasts sharply with the expressive brick architecture of a 1927’s house, exposing the ‘hidden’ qualities.

The house has an original annex at the front side with behind it a beautiful fig tree in the garden that was not visible from inside the old house. Because the new extension extends beyond the existing width of the house, the glass extension is going into a relationship with the existing annex. This creates a semi-enclosed outdoor space around the old fig tree. By widening the extension, a third world arises around the hidden fig tree alongside the old and the new world.

The design for the extension of the house balances between a sharp contrast and the relationship it has with the existing ‘hidden’ qualities of the house.
The existing architecture from 1927 has elements of Art Nouveau and the Amsterdam School. The new addition adds a sharp contrast to the expressive brick architecture through minimalist detailing. The fully glazed façade has a minimal roof ledge and glass that runs to the level of the garden. From the inside, there are virtually no visual barriers to the outside, to which view and daylight are given free rein. The construction of the extension is kept out of sight but for one plus-shaped column, which makes the roof of the extension seem to float. The glass facade can open up to a large open corner, which makes the dining table feel as if it is in the outside space. This is in contrast to the modest kitchen and dining room with less natural light in the original house.

In the interior the concrete floor and the new kitchen wall have been used to connect old and new. The floor and the kitchen penetrate into the existing home and in this way mix old and new through sharp lines. 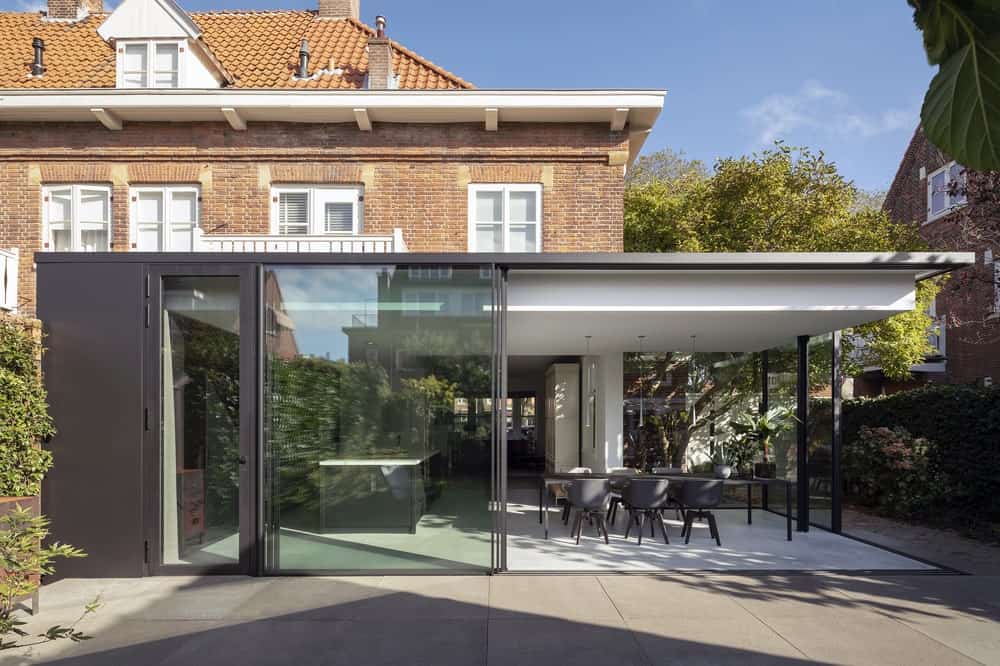 The modern extension contrasts sharply with the old red brick brick home with its tall glass walls, flat roof and steel elements in comparison to the homey exteriors of the brick house. 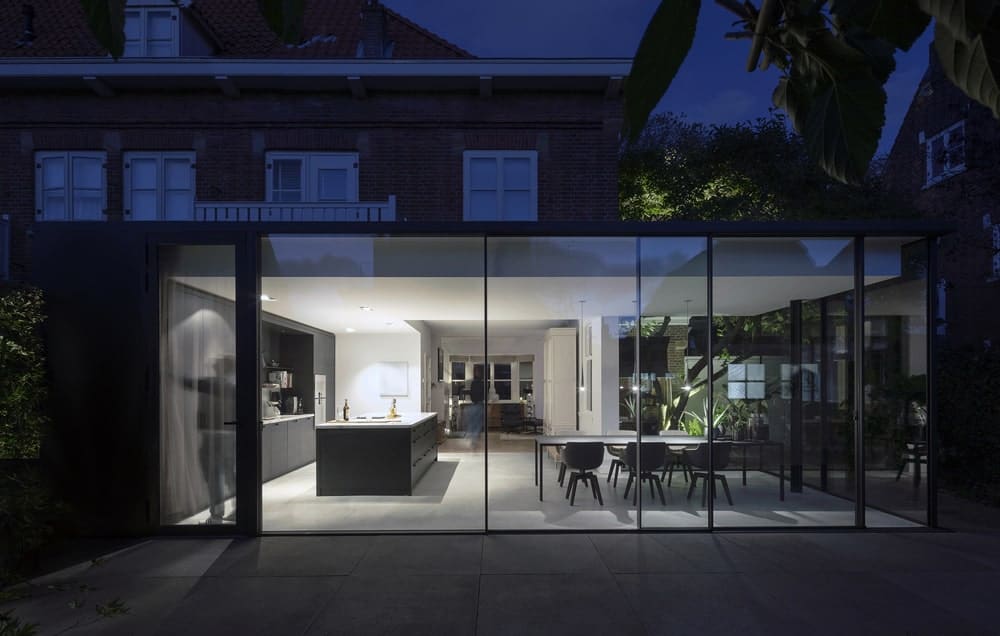 At night, the extension glows from the interior lights giving a clear view of the kitchen and dining area just inside the large glass windows that slide to open to the backyard. 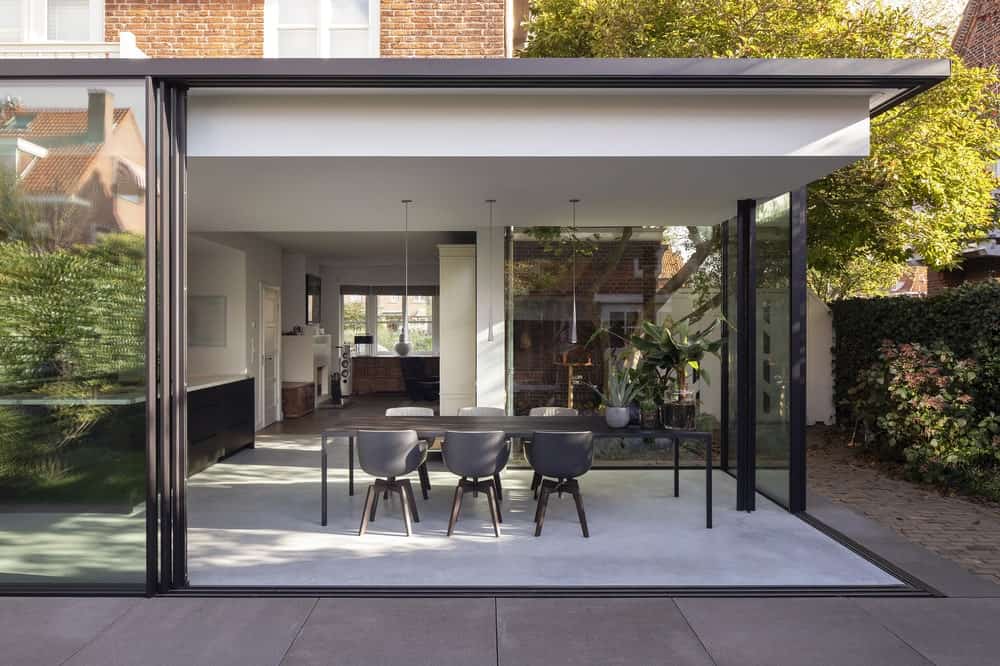 The modern house extension has a bright and light tone to its flooring and ceiling that are brightened by the abundance of natural lighting coming in from all sides. 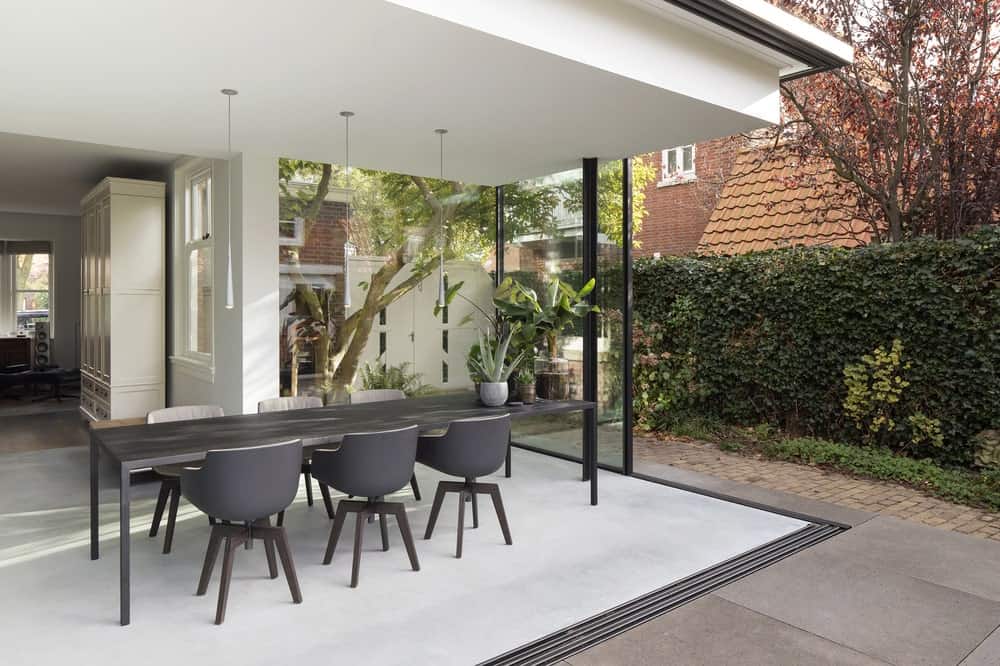 This side of the modern extension has the dining area with its surrounding glass walls giving the dining area a nice background of the beautiful landscaping with trees, potted plants and a wall dominated by creeping plants. 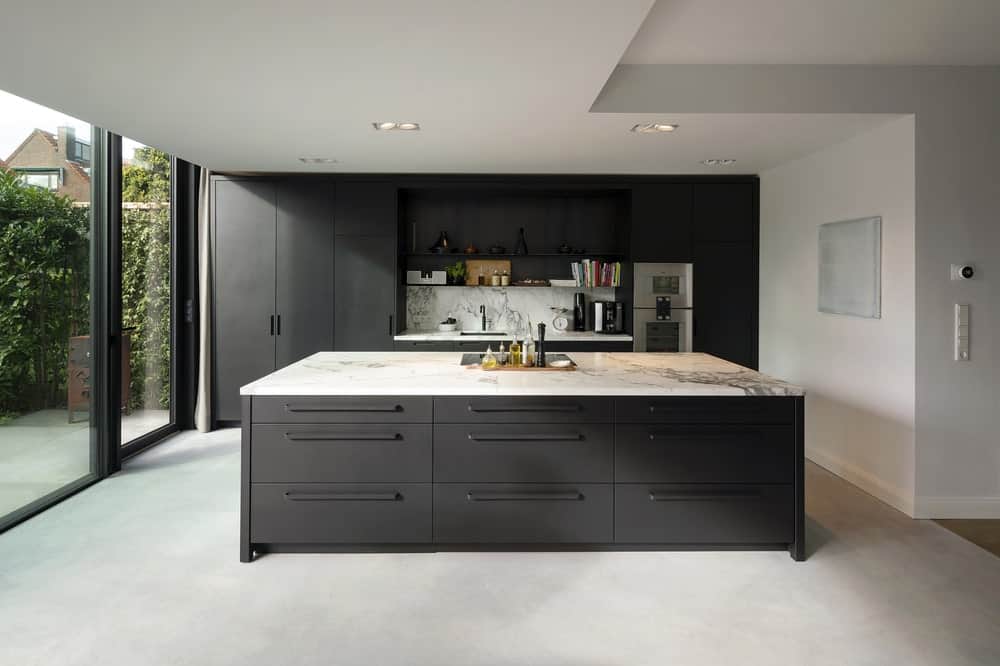 This is the kitchen area of the modern extension. It has a large black kitchen island in the middle contrasted by the light tone of the countertop. This black island matches with the cabinetry placed against the far wall contrasting the bright white ceiling that has recessed lights. 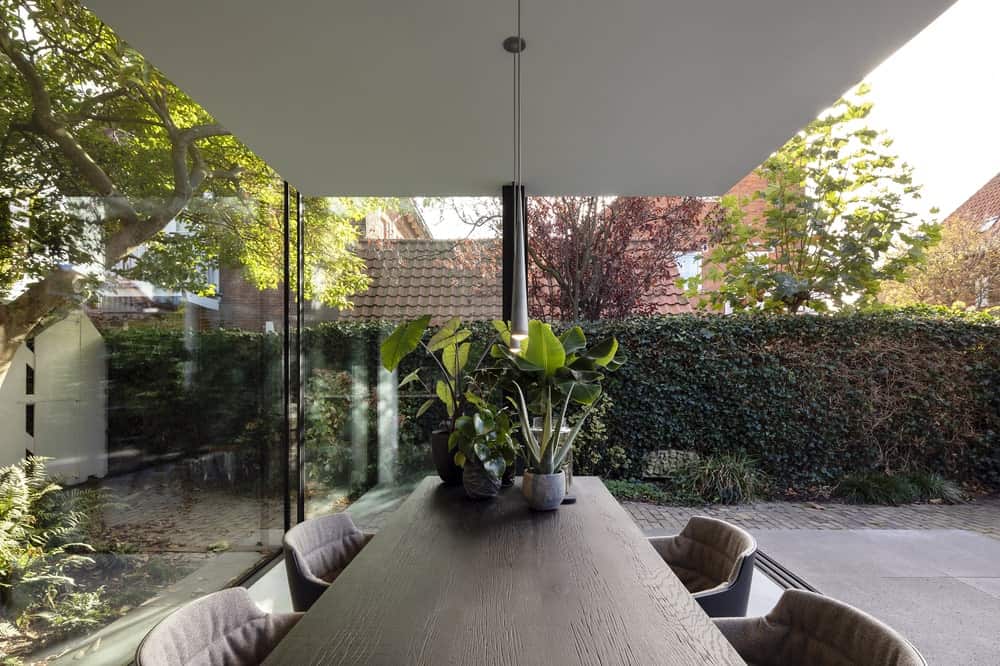 This is the view from the head of the table. The dining area has a large rectangular dark wooden dining table topped with a lovely centerpiece of potted plants and a few sleek modern pendant lights hanging from the white ceiling. 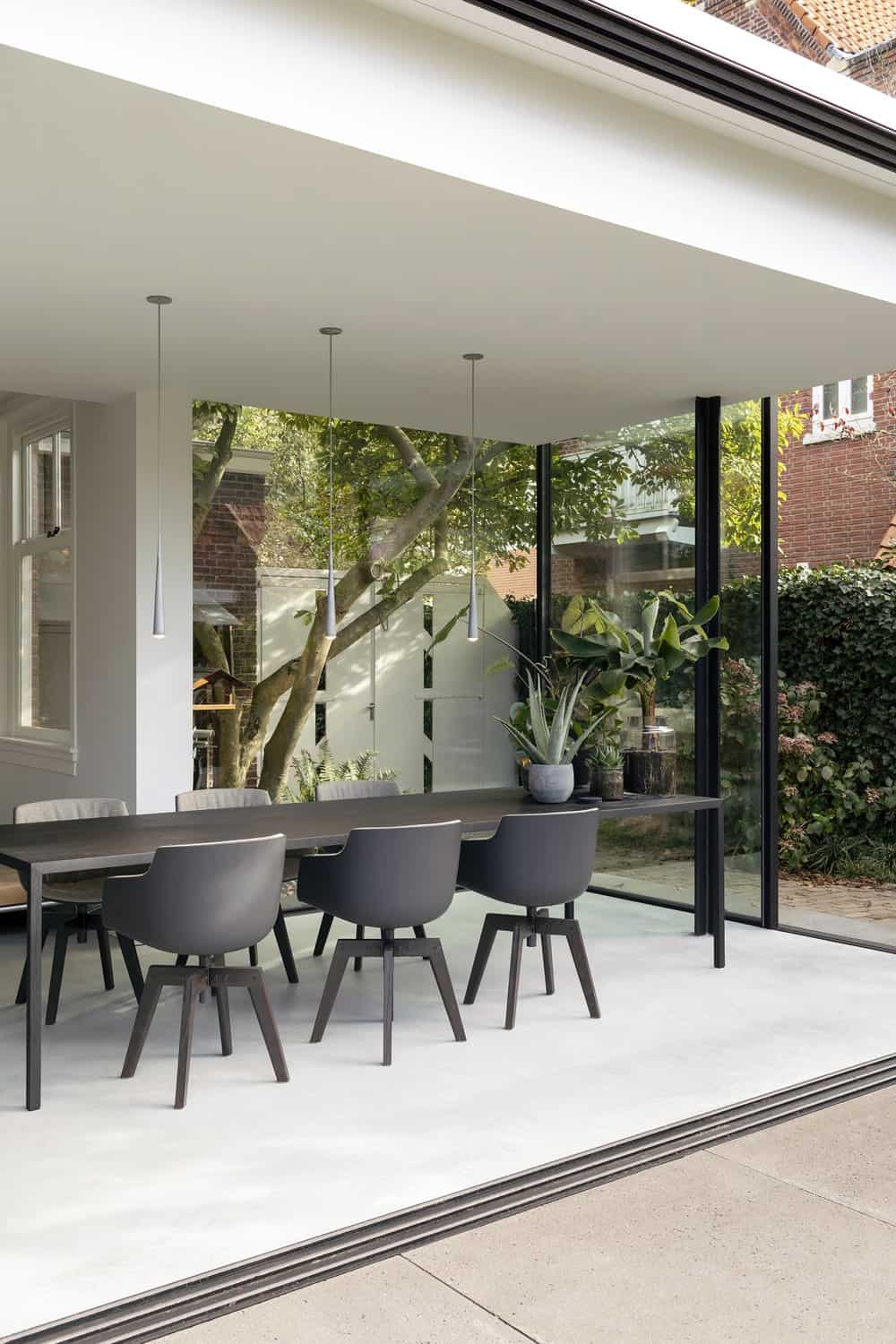 The large dark rectangular dining table is surrounded by a set of dark gray modern chairs with inner cushions and dark legs that stand out against the white flooring. 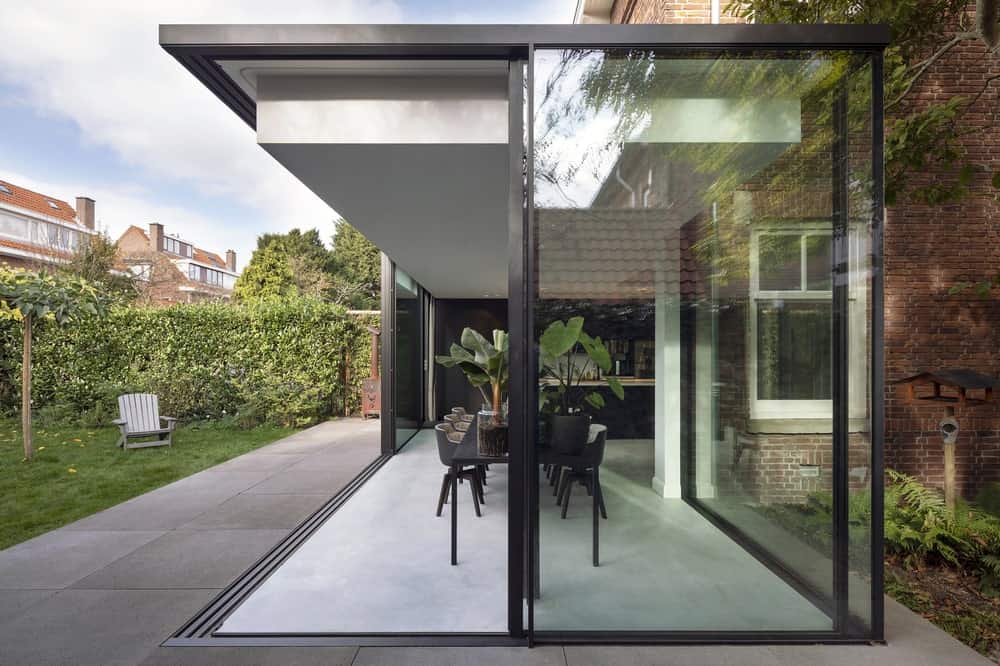 This is a closer look at the large sliding glass doors of the modern extension. It has a dark steel frame to match with the those lining the roof. You can also see here that the extension ends with a lush lawn of grass in the backyard surrounded by walls that are dominated creeping plants. 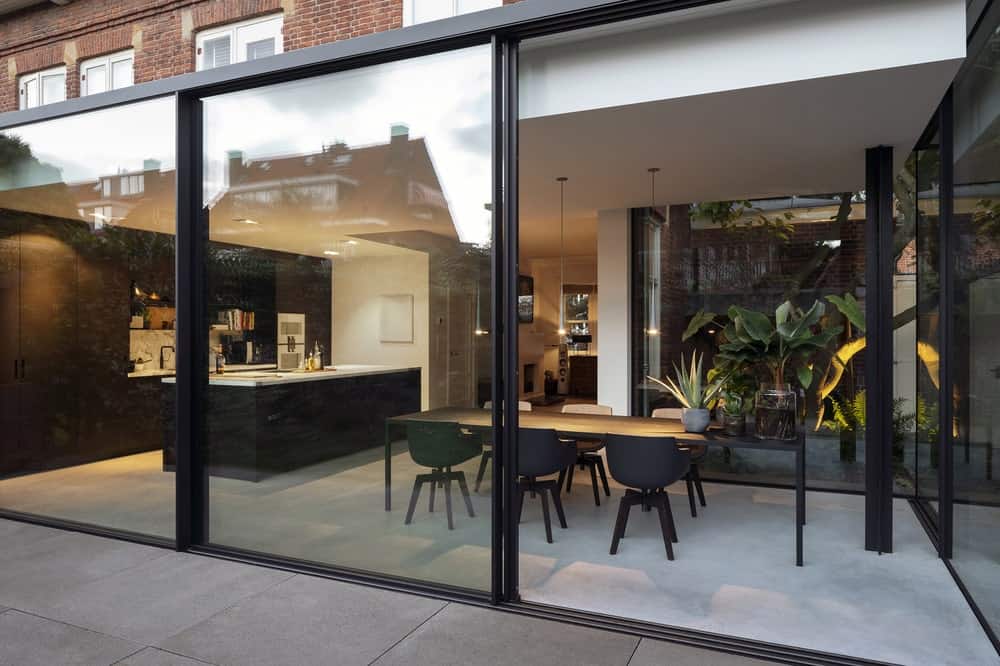 This close view of the modern extension makes you appreciate the craftsmanship and aesthetic of the design. The sliding glass walls a nice touch that gives the whole area a sense being in an even larger area than it really is and it also conserves energy with the amount of natural lighting it lets in. 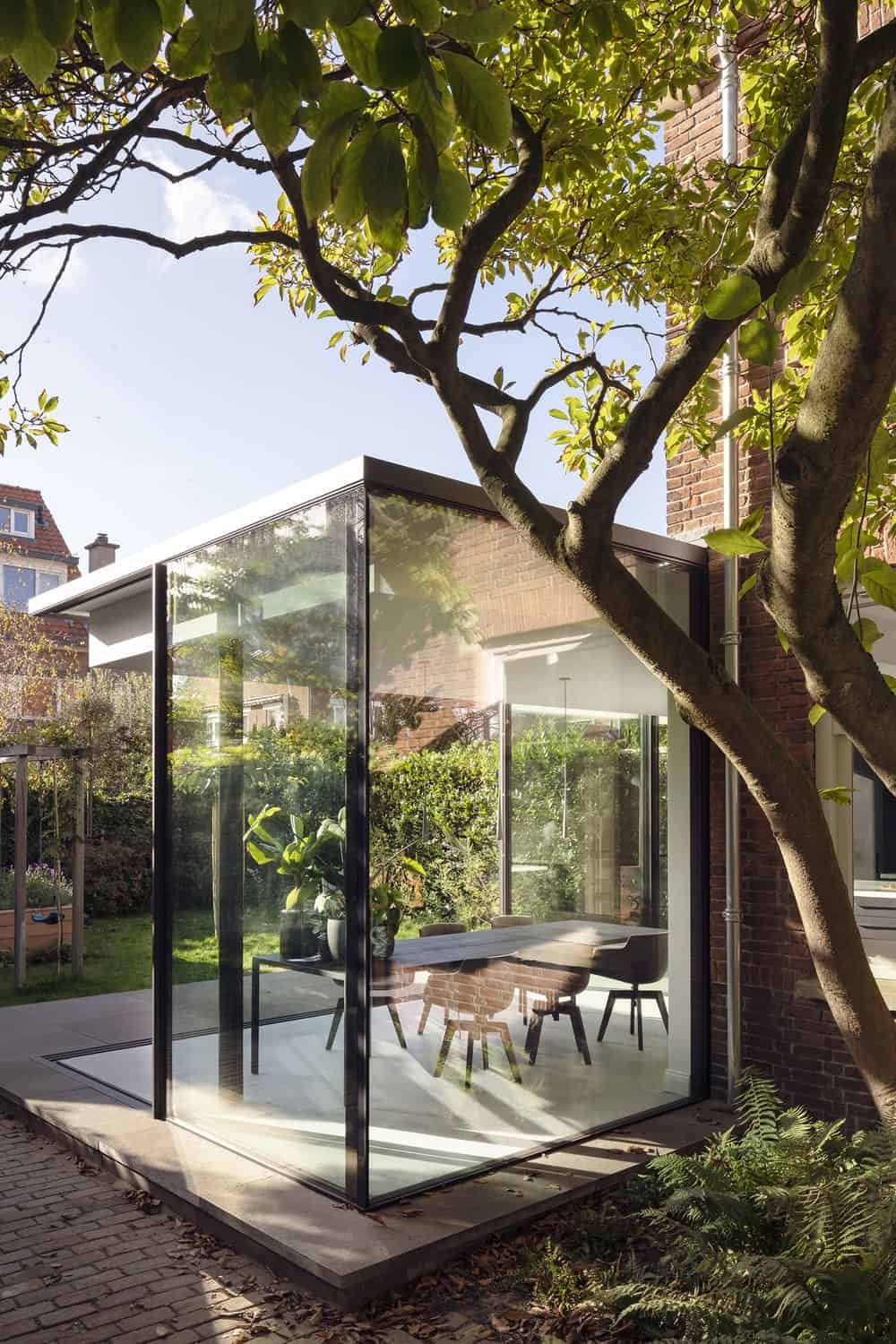 This view at the side gives you a clear view of the contrast between the old red brick house adorned with a gnarled tree and the modern glass and steel elements of the modern extension that has a sleek surface. 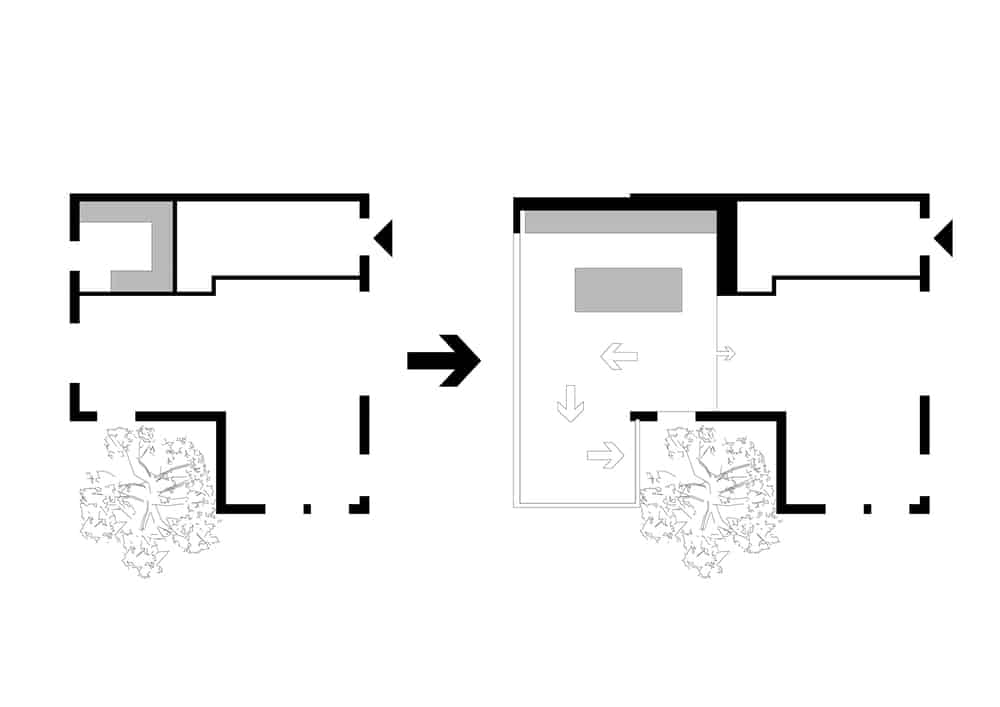 This is an illustrative representation of the amount of renovation and addition that the area underwent. 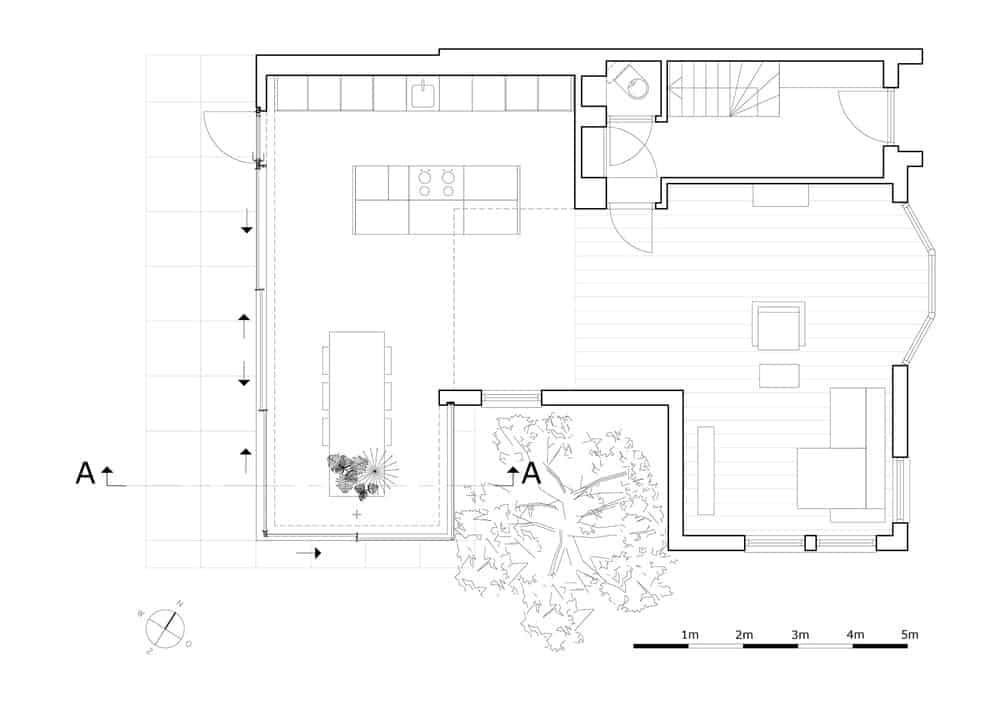 This is the floor plan of the main level depicting the modern extension as well as the directions in which the sliding glass doors go to open the area. 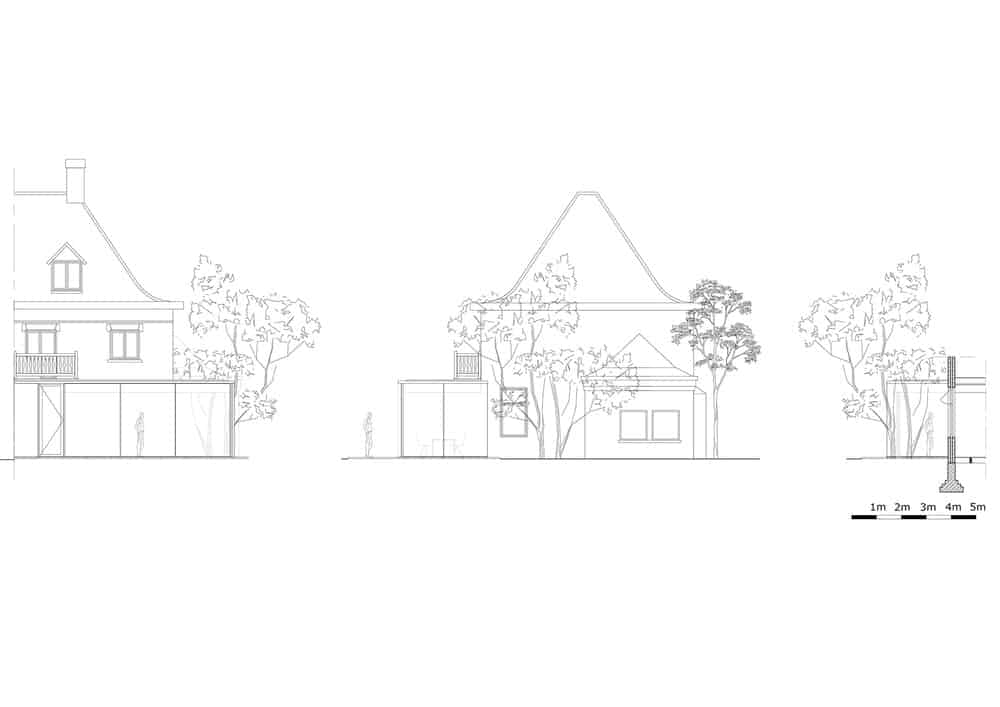 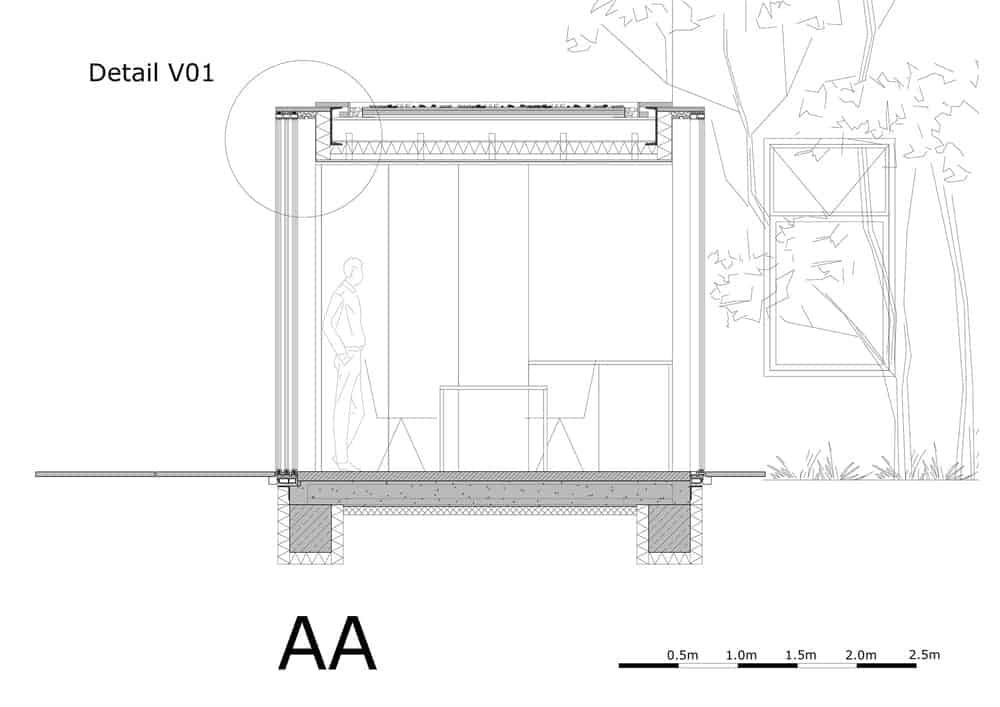