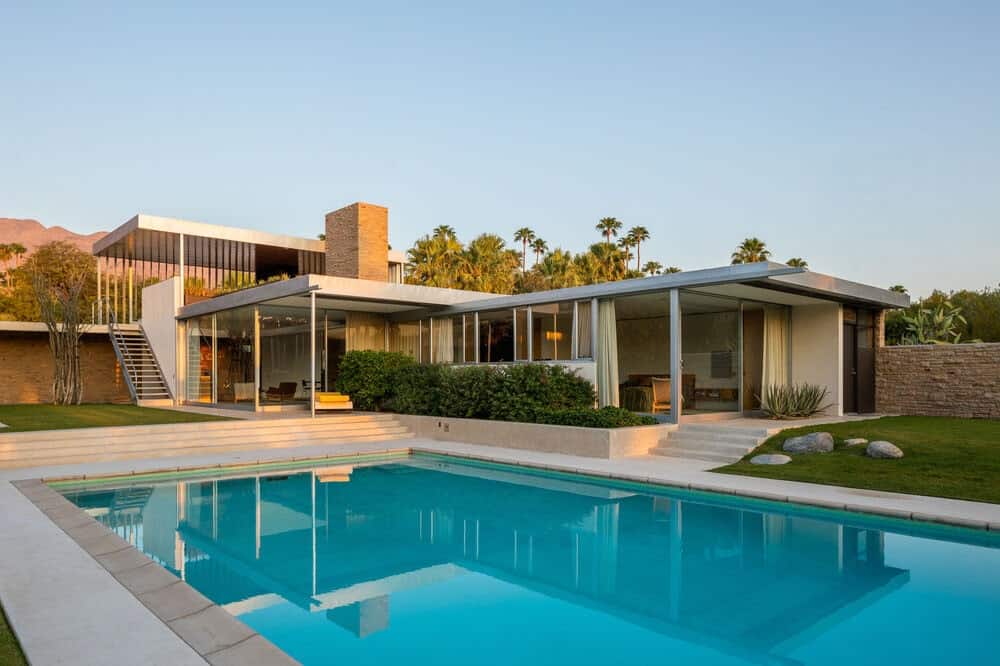 The newly renovated historic Desert House in Palm Springs was created by Richard Neutra and formerly owned by Edgar J. Kaufmann. This home is now on the market priced at $25 million.

The house is measured at 3,162 square feet with 2 acres of land that has a desert garden, emerald green grass, plantings, and a large pool terrace with stunning mountain views. The house has five bedrooms, six bathrooms, a living room with a floor-to-ceiling stone fireplace, an entertainment lounge with a bar, and California-style vanishing thresholds. The house consists mostly of steel, glass, and stone on an open floor plan.

Edgar J. Kaufmann made architectural history twice. First, when he hired Frank Lloyd Wright to design his home, Fallingwater, in Pennsylvania in 1935 and again in 1946 when he commissioned Richard Neutra to create his famed Desert House in Palm Springs. After undergoing a five-year restoration by Marmol Radziner, the Desert House is on the market at $25 million.

Kaufmann, the owner of Kaufmann’s department store in Pittsburgh, which later became Macy’s, was a patron of the arts in the Steel City and contributed heavily toward their advancement. A prominent leader in the retail world, Kaufmann took over the family business at age 28 and quickly tripled the flagship store’s sales, eventually expanding the number of stores to 59 across five Midwestern states.

Kaufmann led the good life of great wealth which allowed him to give back to his city by making large financial contributions to develop its cultural offerings including opera, building the city’s Civic Center, and supporting local artists by commissioning their work.

After Kaufmann died in 1955, the home went through a series of owners including singer Barry Manilow and Gene Klein who was one of California’s most successful used-car dealers and owner of the San Diego Chargers. After some questionable renovations and years of neglect, the home was purchased in 1992 by an architectural historian and her husband who spent years restoring the home to its original design.

Measuring 3,162 square feet with the San Jacinto Mountains as its background, the Desert House was one of Palm Springs’ earliest modern-style homes that have now grown to the largest collection in the United States including John Lautner’s Hope Residence for Bob and Dolores Hope and his Elrod House as seen in the James Bond flick Diamonds Are Forever, Frank Sinatra’s Twin Palms, the Elvis Presley honeymoon home, and the Dinah Shore Estate that is now owned by Leonardo DiCaprio.

The Desert House has five bedrooms and six full baths – a good size to accommodate family and friends who crave a vacation in the California sunshine to escape the snow and sleet of the northern cities. The house itself became a celebrity only a year after its completion when architectural- photographer Julius Schulman created a black-and-white photograph of the house, which gave it international attention and praise.

Over twenty years later in 1970, society-photographer Slim Aarons’ photo “Poolside Gossip” of two women talking by the home’s pool has become a classic as popular today as when it was taken. Constructed of steel, glass, and stone on an open floor plan, almost all Desert House rooms open to attractive outdoor scenery.

The living room has a floor-to-ceiling stone fireplace and the entertainment lounge has a bar and is also open to the outdoors, all in California style with vanishing thresholds between indoor and outdoor living space. In addition to a desert garden, the back opens to emerald green grass and plantings surrounding the large pool terrace with stunning mountain views, all sited on over two acres.

The Kaufmann Desert House, having undergone a five-year restoration by Marmol Radziner, is now for sale at $25 million. It is listed by Gerard Bisignano, a Partner at Vista Sotheby’s International Realty, Palos Verdes Estates.