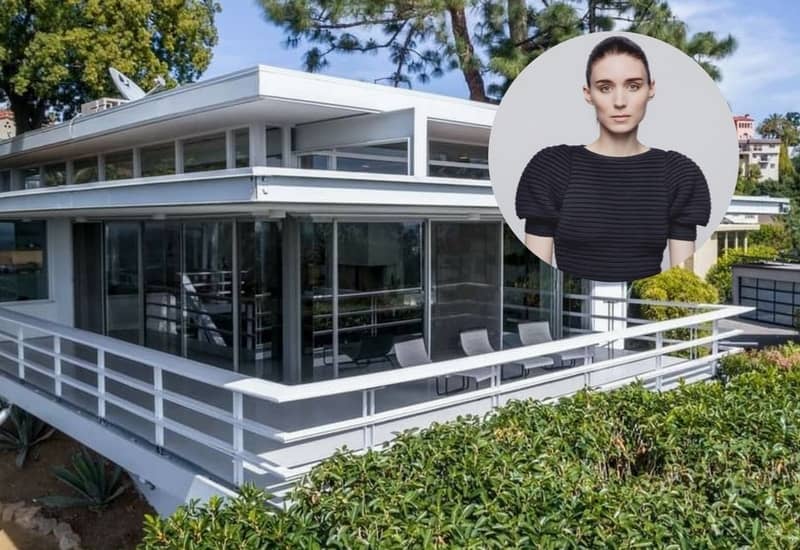 Listed as one of the epitomes of the modern sophisticated homes, Rooney Mara's 1963 Mid-Century Modern glamour boasts an open floor plan with stunning views of the Los Angeles bright lights and rolling hillside.

Patricia Rooney Mara, best known as Rooney Mara was born into an influential Football family but followed a path into acting career. Her success began with the U.S. version of ‘The Girl With the Dragon Tattoo’ and ‘Carol’.

Although their family already had a company waiting for her, Rooney Mara decided to walk on her own path pursuing a career in acting. Appearing as an extra in films with her sister Kate, she billed herself as “Patricia Mara”, then later on changed it to “Tricia”.

Upon winning her first lead role in the film ‘Tanner Hall’, she once again changed her screen name, dropping the “Tricia”, stating that “Rooney” was more memorable. After that, Rooney Mara finally got her breakthrough appearance in ‘The Social Network’ in 2010, as the girlfriend of Mark Zuckerberg, the co-founder of Facebook (played by Jesse Eisenberg). That same year, Mara starred in the remake of ‘A Nightmare on Elm Street’, then she auditioned for ‘The Girl With the Dragon Tattoo trilogy’, outshining stars like Natalie Portman and Scarlett Johansson.

Upon that breakthrough in 2010, Mara’s star shone brighter, as she was nominated for both a Golden Globe and an Academy Award in the lead actress categories for her performance in the film based on Stieg Larsson’s bestselling novel portraying Lisbeth Salander, a genius computer hacker. In 2015, following the success in ‘Peter Pan’, Mara also starred in acclaimed romantic drama ‘Carol’, receiving Golden Globe lead actress nomination and the second Oscar nomination of her career for the role.

Listed as one of the epitomes of the modern sophisticated homes, Rooney Mara’s 1963 Mid-Century Modern glamour boasts an open floor plan with stunning views of the Los Angeles bright lights and rolling hillside.

Featuring a full Mid-Century Modern style, the 2340 square feet home has a stylish living room with a fireplace and lounging space, leading to the dining area. The open kitchen includes a large center island and offers a beautiful pale, seafoam-green cabinets. The home feature two bedrooms as well as a home office.

The outdoor area of the home is surrounded by over-sized lounging decks while the hillside garden is populated by mature trees.

Check out the full photo gallery below of Rooney Mara’s home.

CelebsNetWorthToday.com estimates her fortune at $8 million.