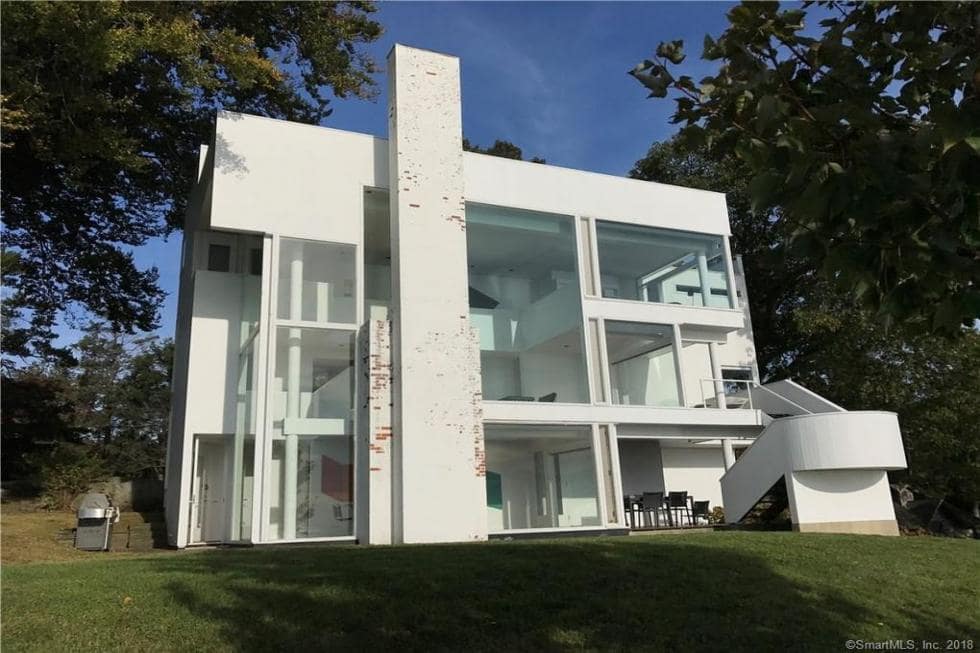 A graduate of Cornell University, Richard Meier started out by designing homes after the Modernist style.  He spent much of his early career working for the prestigious architectural firm Skidmore, Owings, and Merrill in New York City.  In the mid-1970s, he began working on larger, public buildings, such as the Contemporary Museum of Art in Barcelona and the Getty Center in Los Angeles.

His works, characterized by white or light-colored exteriors and geometric features, have earned him considerable recognition over the years.  He’s gotten accolades from several architectural associations, such as the American Institute of Architecture.

In 1984, he received the coveted Pritzker Architecture Prize, often called the Nobel Prize of architecture.  In 1997, he was awarded the Praemium Imperiale Prize for architecture by the Japan Art Association. 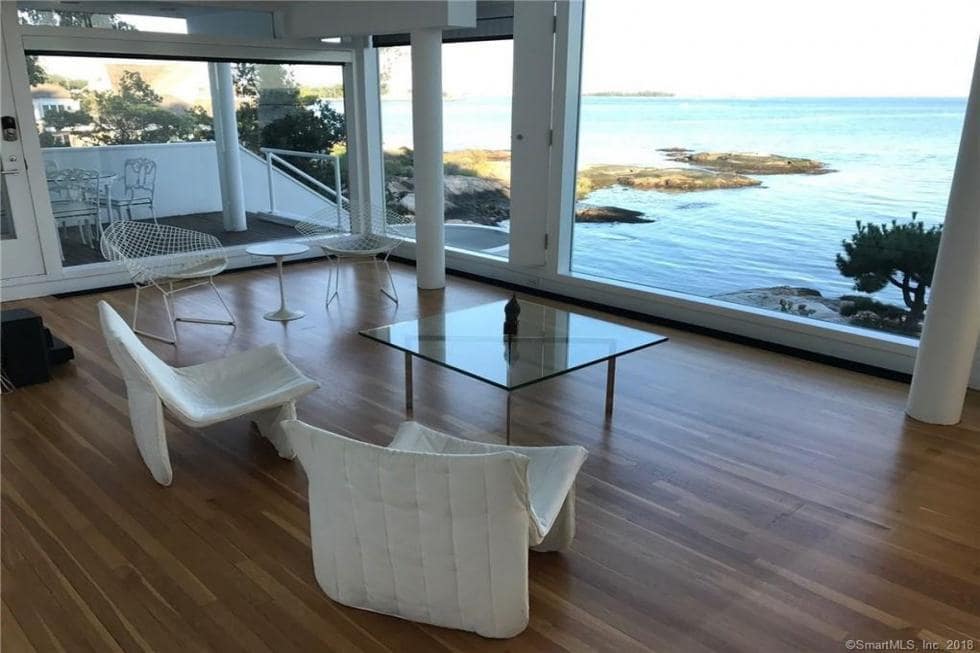 This is the living room on the first floor with a simple setup of two comfortable chairs and a glass-top coffee table to highlight the landscape outside the glass walls. Image courtesy of Toptenrealestatedeals.com. 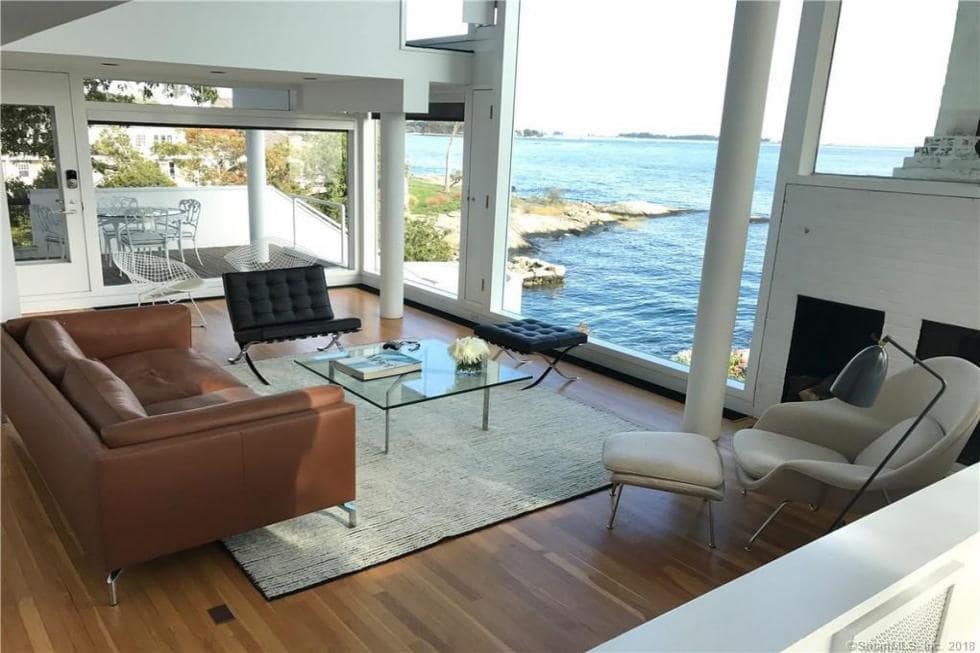 This is the living room on the second floor with a large leather sofa facing the glass wall. There is also a balcony and a fireplace. Image courtesy of Toptenrealestatedeals.com. 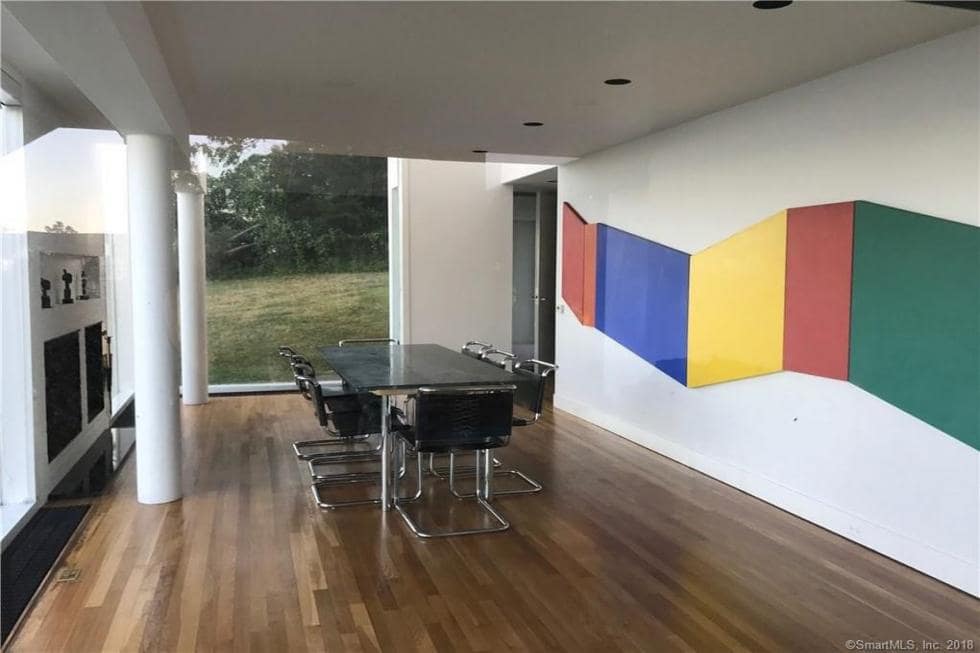 This is the spacious dining room with a black modern dining set to stand out against the white walls and glass walls. These are then complemented by the colorful accent of the wall. Image courtesy of Toptenrealestatedeals.com. 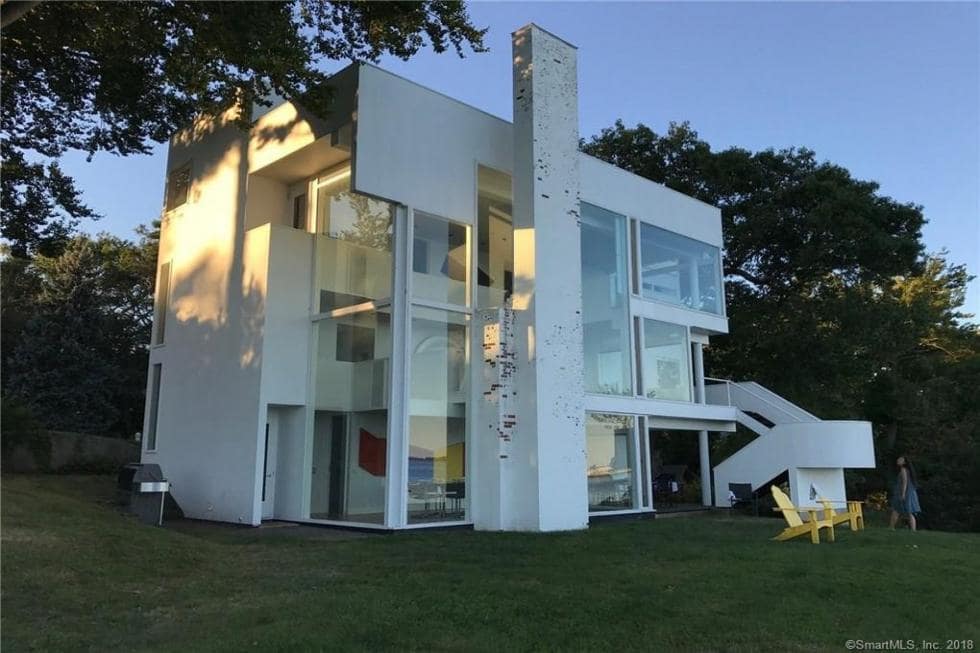 This is the back of the house with a wide grass lawn just outside the glass walls. Image courtesy of Toptenrealestatedeals.com. 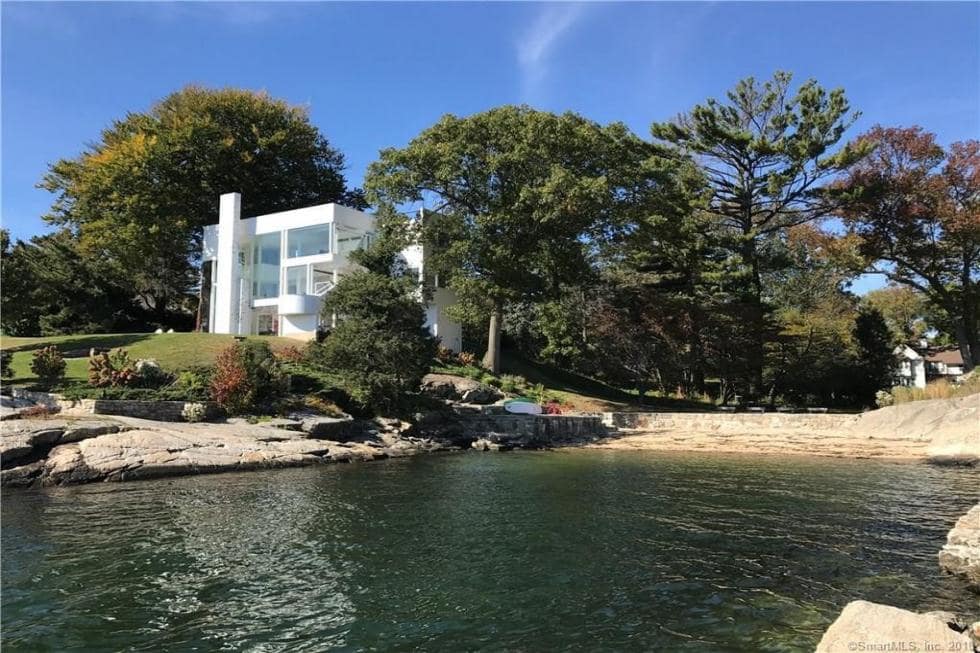 This is a look at the back of the house from the vantage of the beach. You can see here the house standing out with its white exteriors against the green landscape. Image courtesy of Toptenrealestatedeals.com.

On the lookout for one-of-a-kind architecture?  Then be sure to check out one of the homes designed by architect Richard Meier.  It’s located in Darien, Connecticut, with the ocean as its front yard.  By the way, it’s for sale, listed for $14.5 million.  The iconic structure was built in 1967, and this is the first time it’s been on the market in roughly half a century.

Taking even a quick glance at this home will likely bring back memories of high school geometry — lots of planes, right angles, squares, and rectangles.  But the only math you’ll need to know about for this house, besides its price tag, is its square footage:  3,930.

The dwelling, which is also called the Smith House (named after the family it was built for), is one of Meier’s earlier designs.  It spans three levels.  Most of the exterior is white, with plenty of windows.  A few accents here and there are designed to make the building less stark.  Its admirers love how it stands out in gleaming contrast to the blue of the water and the surrounding greenery.

Whoever buys this house will probably want to spend most of their time in the living rooms.  Yes, there are two, one on the first floor and one on the second.  With floor-to-ceiling windows, they offer breathtaking views of Long Island Sound.

Sitting in the first-floor room makes you feel almost as if you’re actually on the water, especially if you step out onto the adjoining deck.  The second-floor living area is complete with a balcony and fireplace.  (There’s another fireplace on the first floor; you’ll see it as soon as you walk in).

This “waterfront wonder” boasts four spacious bedrooms and three baths.  In addition to the aforementioned living and dining areas, on the first floor, you’ll find a renovated kitchen and en-suite bedroom.  The second level is home to the upstairs living area and primary bedroom.  On the top floor is a “Jack and Jill” set-up — two bedrooms that share a bathroom.

The home sits on 1.5 acres of natural landscaping, including a stretch of private beach and rock formations.  At the back of the house is an expanse of a well-manicured lawn.