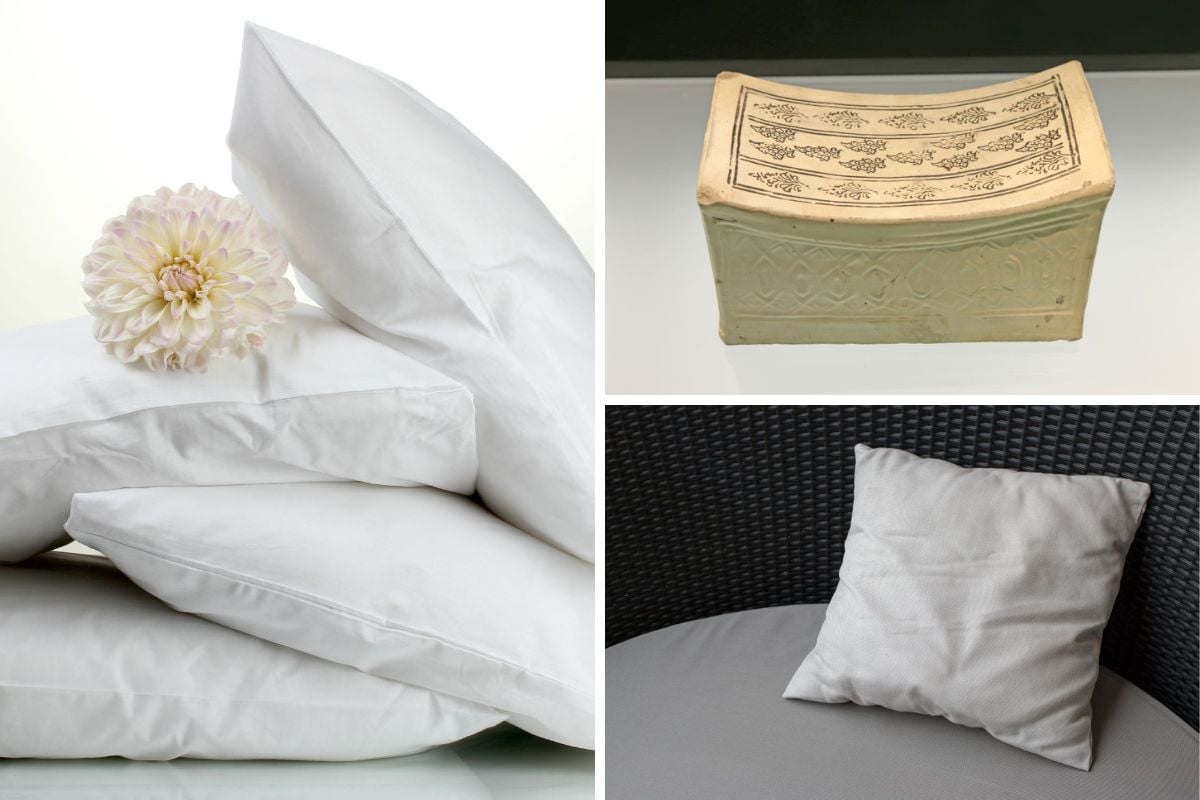 Ahhh! The feeling of your head nestled into a soft pillow for the night or after a long day at work. I purchase queen-sized pillows labeled extra firm for my ultimate restful night of sleep. Do you have a favorite pillow? How soft is it? Would you like to trade it for a wood pillow or a pillow made of stone?

Who made the first pillow? Were they widely distributed among the masses to give everyone a comfortable night when they lay down to go to sleep? Did the rulers of some countries reserve pillows for royalty?

Related: How Long Do Pillows Last | How Many Pillows Should You Put On a Couch | How Big are Standard Pillows

Who Invented the Pillow?

The popular pillow manufacturers of today did not invent the pillow. It is not a newfangled product from the turn of the 20th century. The Mesopotamians invented the first pillow. Some sources indicate that evidence shows the creation of the first pillows occurred 9,000 years ago.

People of the Mesopotamian Culture apparently did not have cushy comfort in mind when they made early pillows, or maybe they did not have the materials to make soft, comfortable pillows. Did you know that the ancient Mesopotamians of present-day Iraq made pillows out of stone?

They carved it into a cradle shape, or a half-moon shape, in order to make a place for a person to lay their head. The reason for the invention of the pillows was not for comfort while sleeping.

Sleepline indicates that they made the pillow to elevate the head to keep insects from crawling into their eyes, nose, and mouth. I cannot imagine laying my head on a stone pillow at night and expecting to get a good night’s sleep.

Ancient peoples did not make pillows for the masses. Wealthy and influential families had stone pillows. The average Mesopotamian did not have the wealth to afford the pillows.

Ancient Pillows in Other Cultures 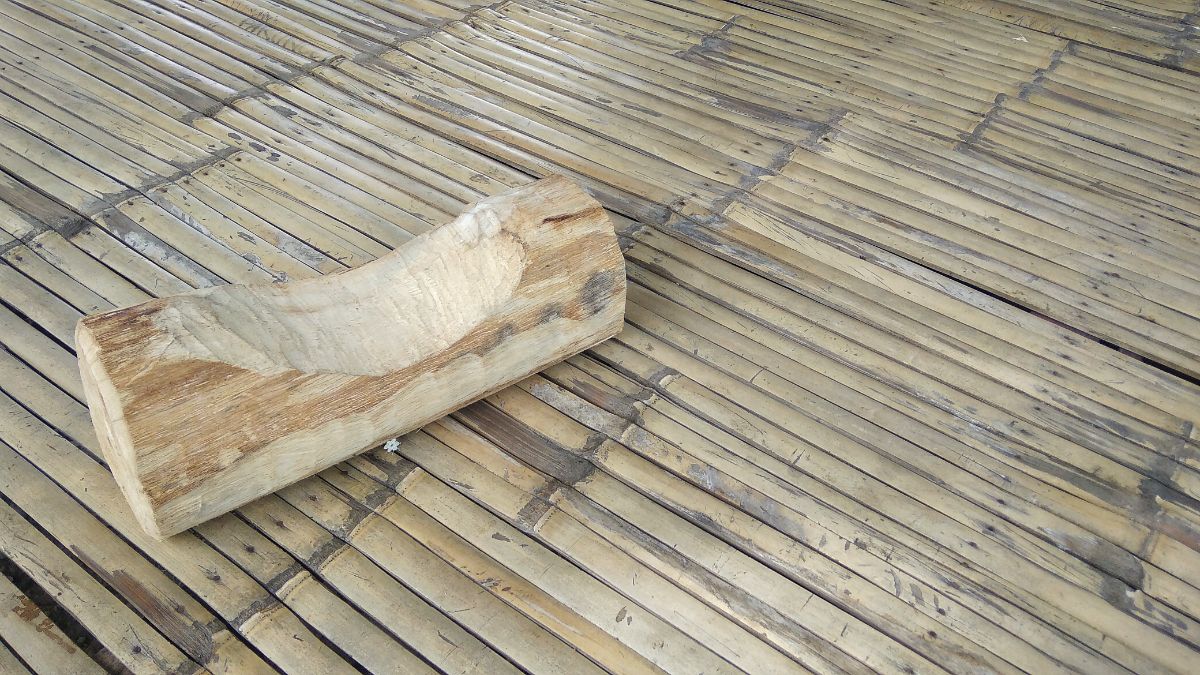 Once the Mesopotamians created the first pillow, as far as we know it today, other cultures developed pillows for their own reasons and beliefs. Comfort was not among the reasons that people from other countries invented their own pillows.

The ancient Chinese people had the knowledge and ability to make soft pillows. They chose not to make their pillows soft but to make them of hard materials. People of ancient China made pillows of highly decorated stone, jade, bamboo, porcelain, or wood.

Why would anyone who had the materials and ability to make a soft pillow make it using hard materials? It has to do with cultural beliefs.

The ancient Egyptians had pillows that were primarily made out of stone, ivory, marble, or wood. Egyptian people, like the Mesopotamians, carved out the top to accommodate the head.

Hankering for History explains that they made pillows to hold the head since it was, in their belief, an “important spiritual and life center for the body.” Wealthy people owned pillows, not ordinary Egyptians.

The wealthy, who had the means to purchase them, placed a pillow that had carved images of the gods under the heads of their deceased loved ones. 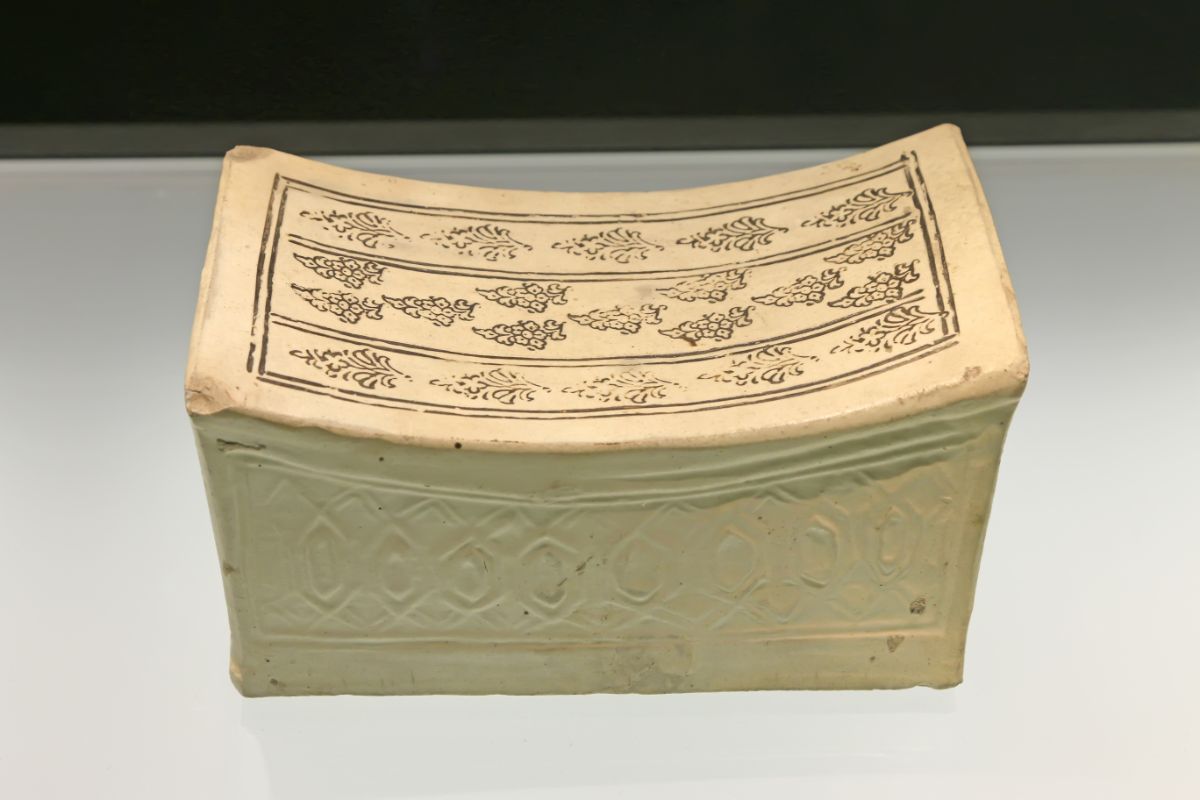 The Romans and Greeks had pillows in ancient times. They used materials such as straw, feathers, and cotton stuffed into a bag to make their pillows.

Do not think that this led to the Romans and Greeks modernizing the pillow over time and making it the soft, comfortable pillow that we know today. They made pillows more affordable, which led to ordinary citizens using them.

Pillows Through the Middle Ages

Do you believe that pillows likely experienced refinements during the Middle Ages that eventually led to manufacturing pillows as we know them today? The truth is that, during the early Middle Ages, many men saw pillows as a sign of weakness. The belief resulted in pillows losing their popularity.

Pillows made a comeback before the end of the Middle Ages, but primarily only for people who had an illness or pregnant women. King Henry VIII banned the use of pillows for everyone except pregnant women.

People believed in the idea that people should not lie around or sit around for long periods of time. The pillow, whether used for resting or supporting the head or for sitting on, once again fell out of favor.

Pillows and the Industrial Revolution 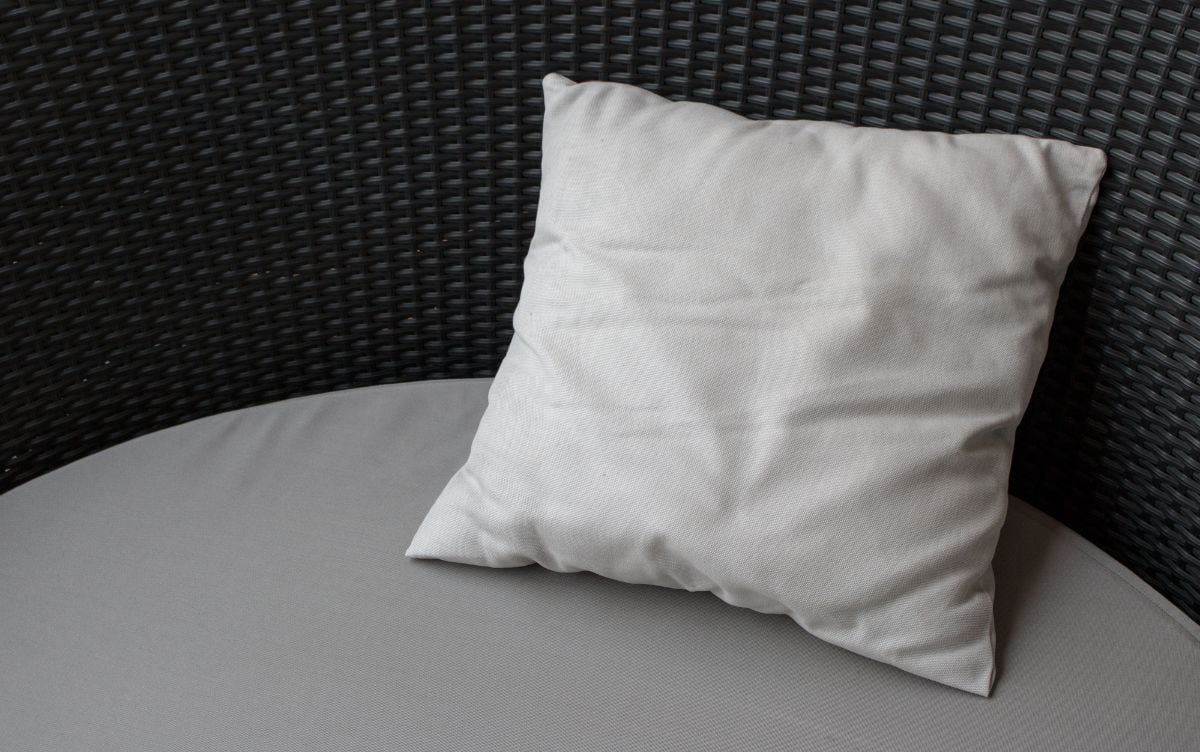 The Industrial Revolution started in the late 18th century and lasted through the early 19th century in Great Britain, the United States, and throughout continental European countries. The period resulted in a change from an agrarian society to one an industrialized, urban one.

The increased use of steam and water power and the invention of machines that helped nations go from handpicking to machines are examples of changes during this period. Factories sprang up, which started mass production of goods. One product that brought pleasure to many people during this time is the pillow.

A surplus of textiles available during the Industrial Revolution meant that companies had more goods available for the common people and wealthy people. That does not mean that the ordinary person and the wealthy individual enjoy the same type of pillow.

Wealthy people slept on pillows made of goosedown. The issue with this type of fill was that goose down sometimes led to the development of mildew or mold. Pillows initially had a filling of chicken feathers or clean hay for the ordinary person at the start of the Industrial Revolution.

Modern technology led to the production of soft, cotton-filled pillows.

Cotton-filled pillows still let many a person have a good night’s sleep. They remain the most common type of pillow sold today.

Modern technology has helped to bring pillows to the forefront of comfort. We use pillows for more than just to sleep on today. The pillow placed behind the back, the floor pillow, and the pillow behind the neck while traveling all serve the purpose of helping us experience comfort.

Pillows that manufacturers make for beds allow people to choose the ideal pillow for their needs and desired comfort level. You no longer have only one or two pillow options. 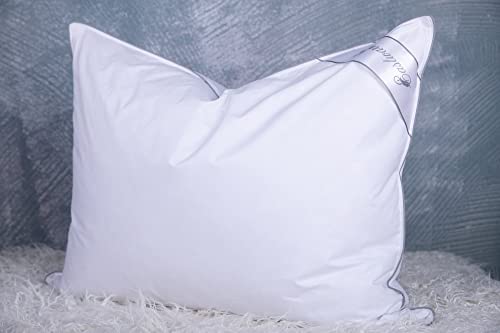 Consider feather pillows if you want softness and higher loft. You have to frequently fluff the pillow to maintain that higher loft. 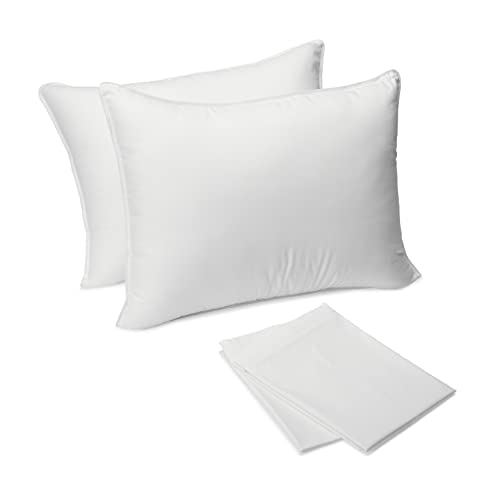 Do you wonder if there is a difference between feather pillows and down pillows since they both use down as the filling for the pillow?

Down alternative pillows provide the softness of down in a synthetic version of the down pillow. Manufacturers usually fill these pillows with polyester materials. 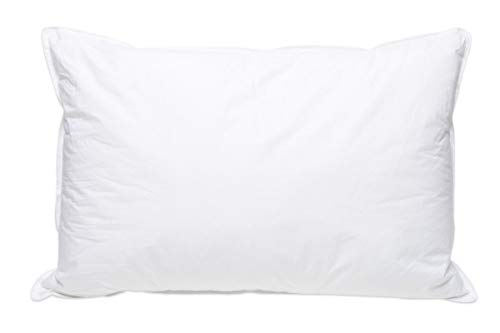 Polyester pillows are a budget-friendly pillow option. The polyester pillow has some downsides, including that it becomes lumpy faster than some other types of pillows. The good points, besides affordability, include that they have hypoallergenic properties and that they are lightweight pillows.

They come in a variety of firmness levels, allowing for a customized sleep experience. 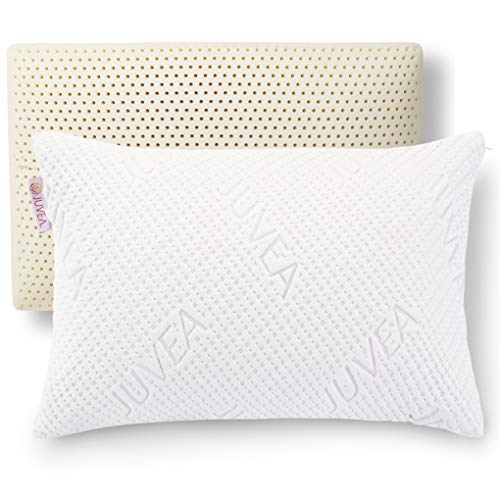 The latex pillow provides a high level of support while maintaining softness. They are breathable, durable, moldable, and biodegradable.

Latex pillows are good for back and side sleepers. They are not recommended for stomach sleepers because of the higher-than-average loft. 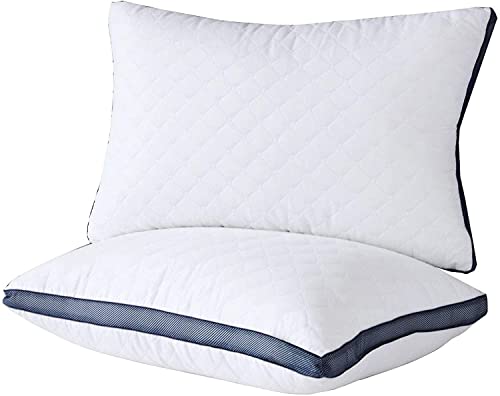 Many people like gel pillows because this type of pillow keeps you cool while you sleep. Manufacturers of gel pillows combine a material such as latex or foam with the gel, which provides the coolness of the gel with the softness that people want in a pillow.

Gel pillows are more expensive than most other types of pillows. 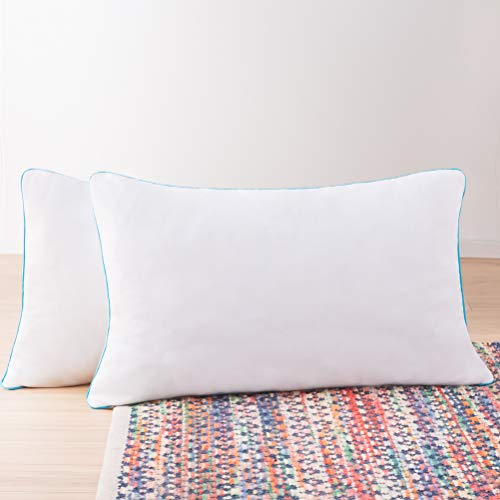 The downside to memory foam pillows is that they retain heat. Some side sleepers find that the pillow is too firm to provide them with ultimate comfort. 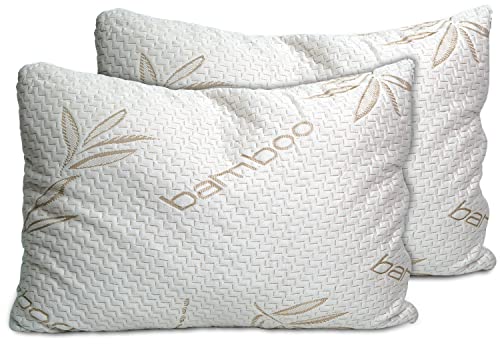 Bamboo pillows are an eco-friendly pillow choice. People who have allergies or sensitivities to certain pillow materials often find that bamboo pillows allow them to breathe and have a comfortable night’s sleep.

The rise in bamboo pillows also comes from their anti-microbial properties and the fact that they do not retain heat. Companies usually make a shredded foam interior and a bamboo viscose shell when making bamboo pillows.