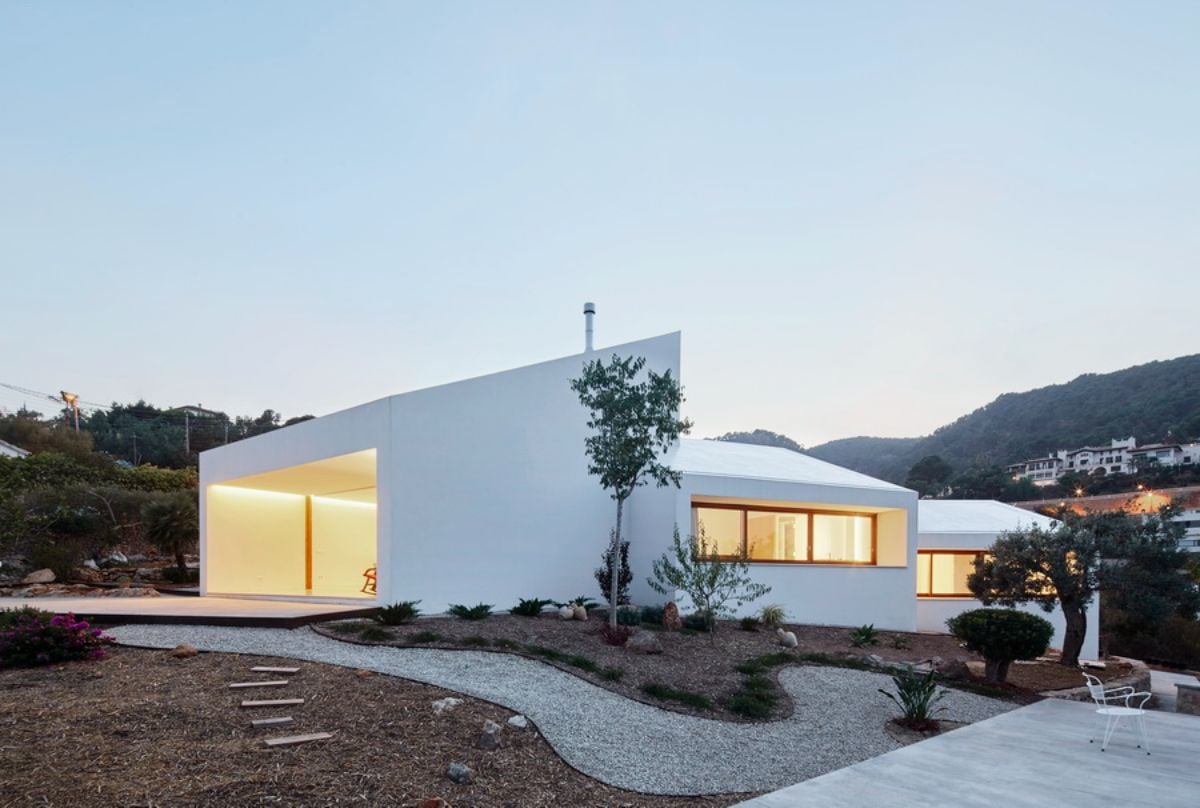 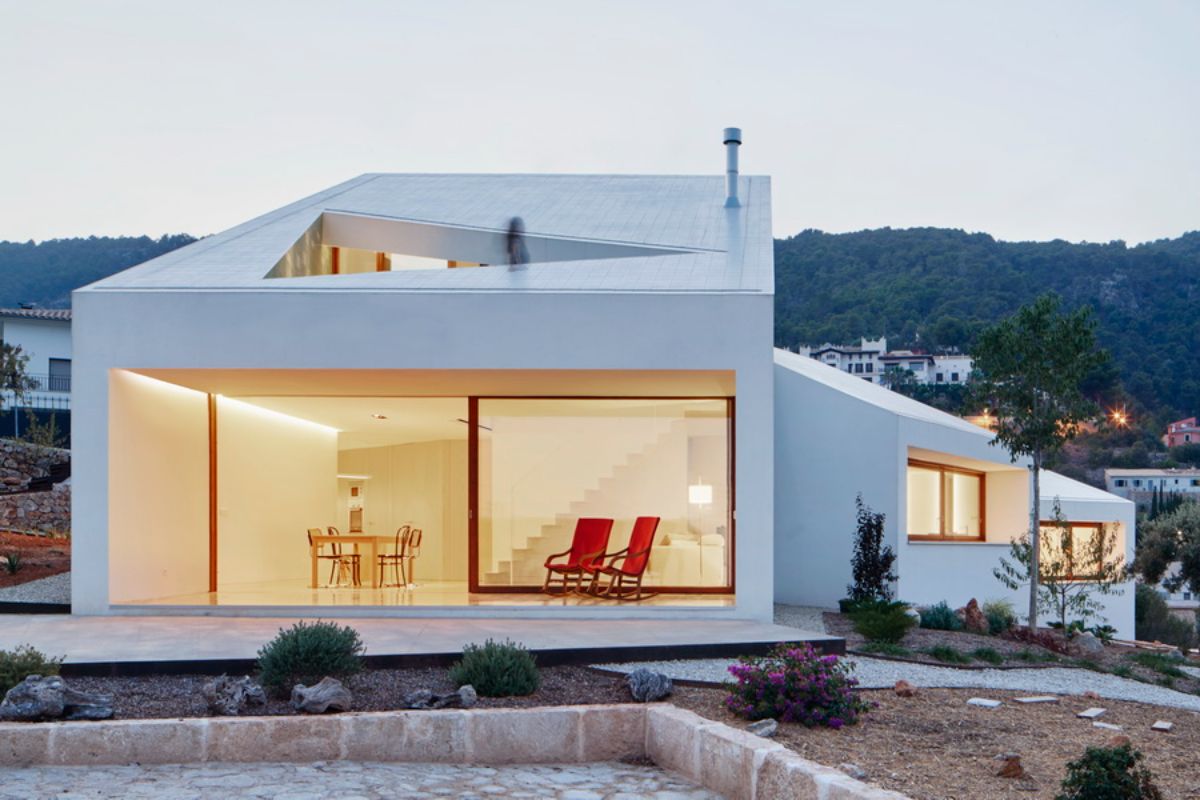 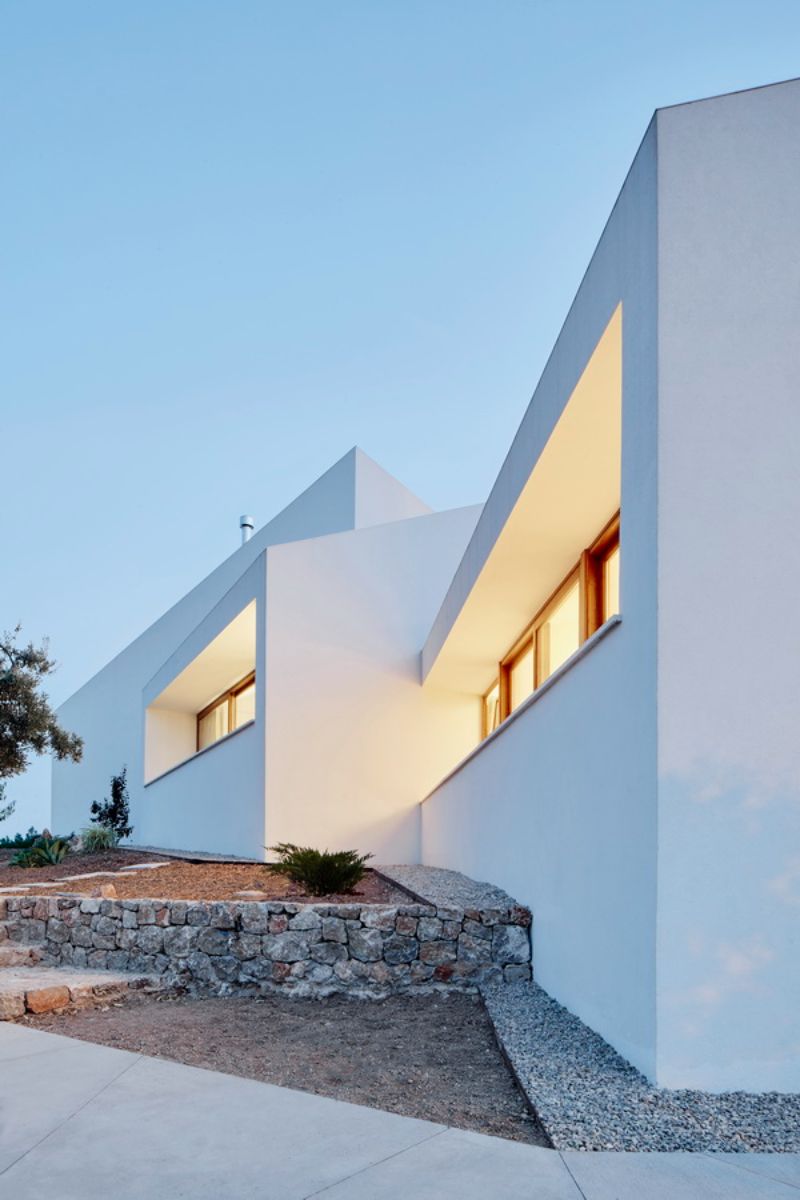 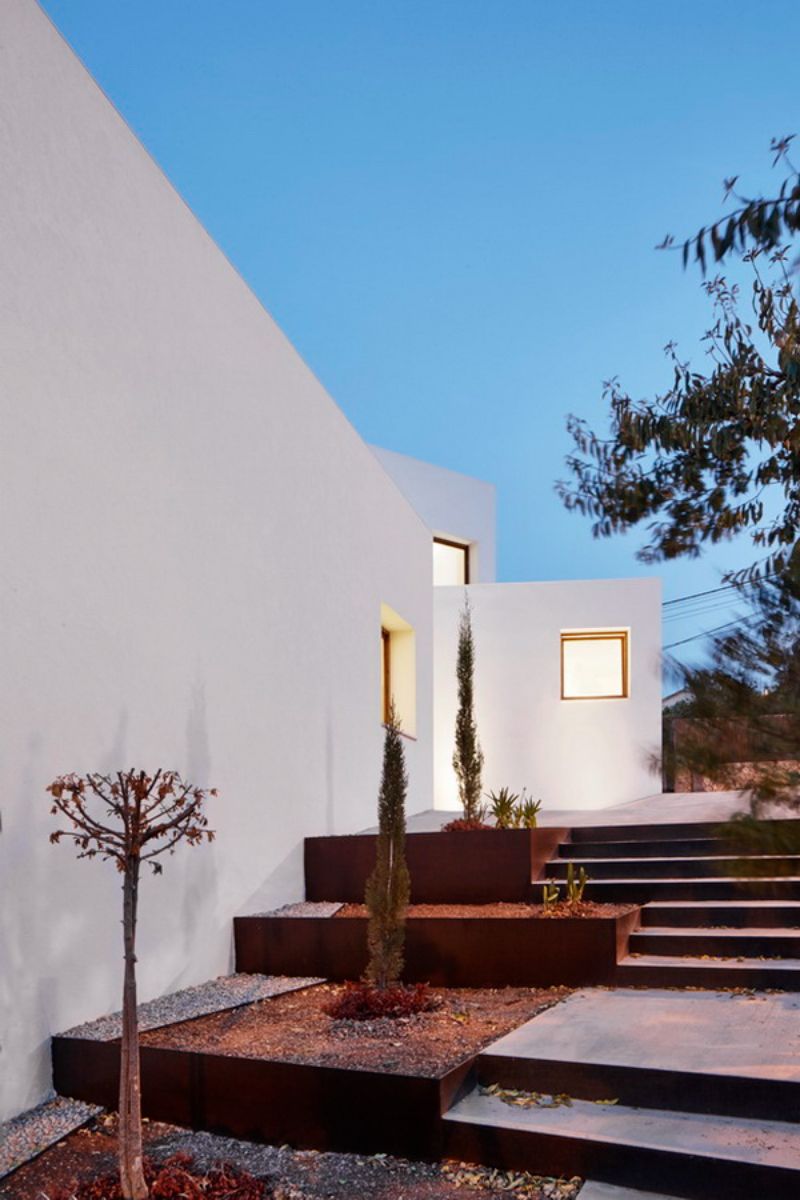 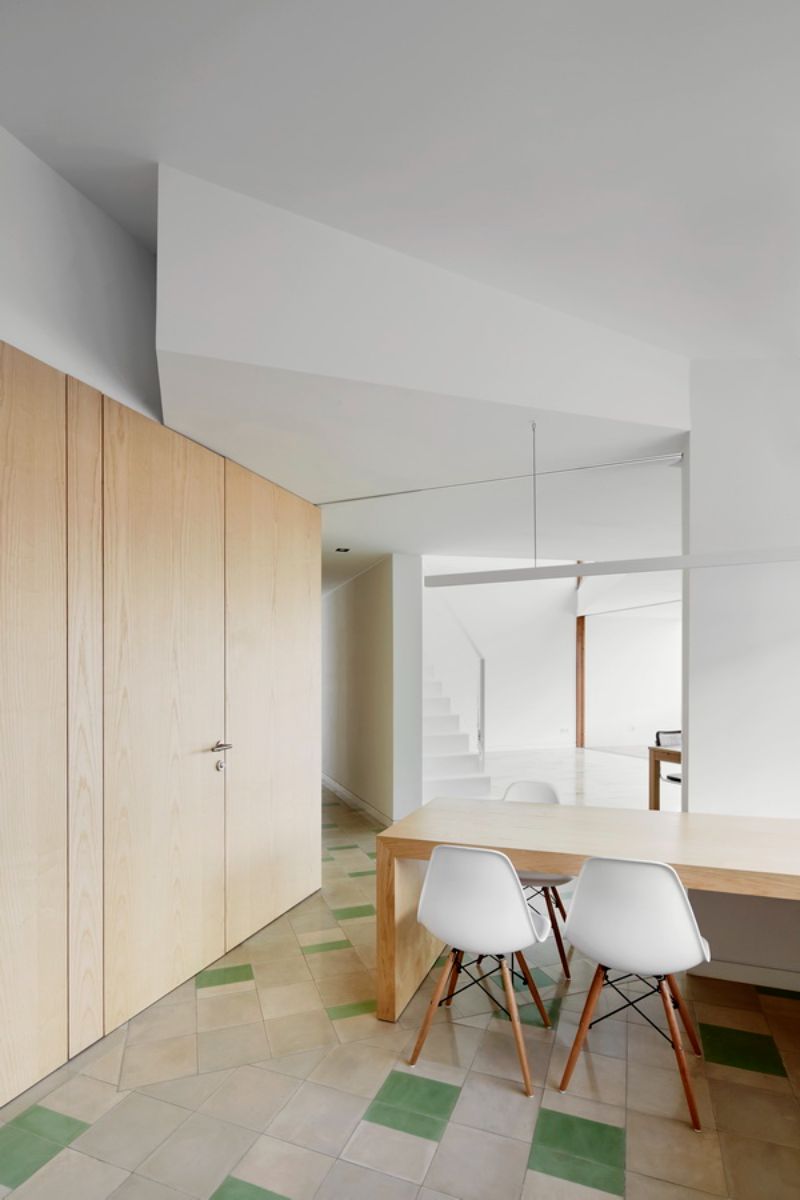 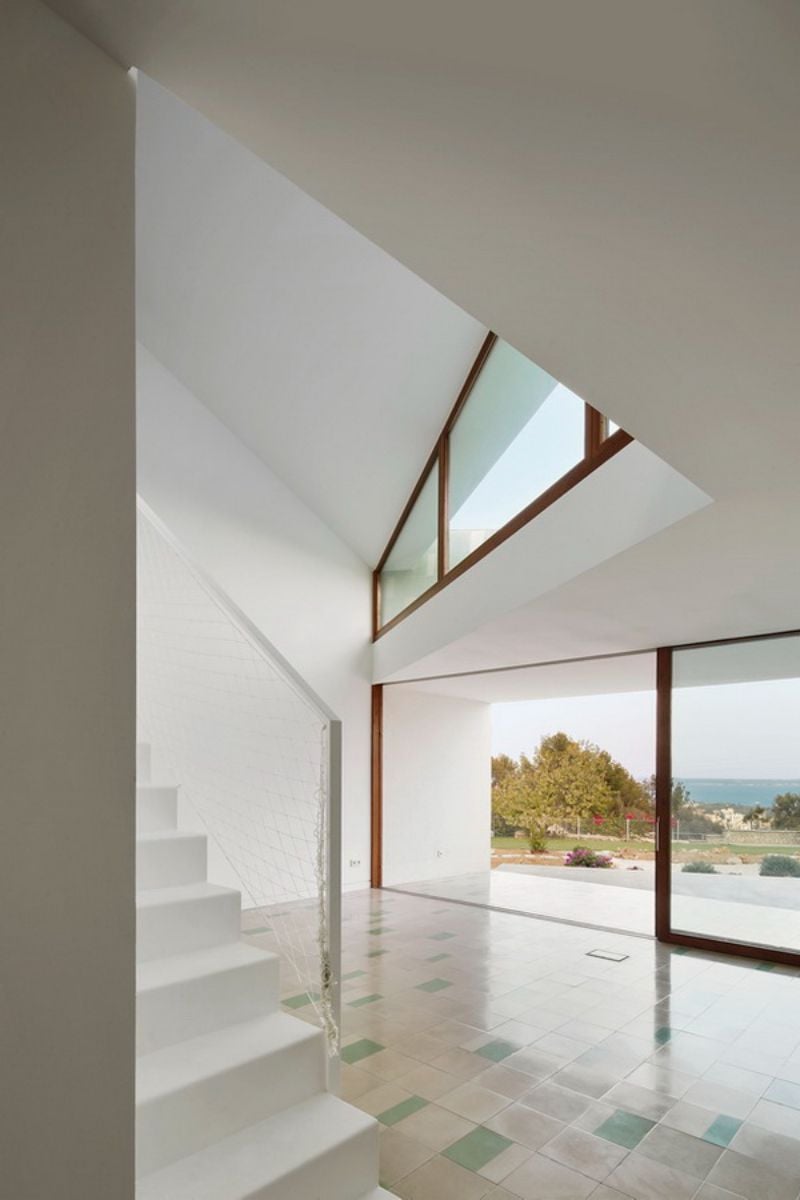 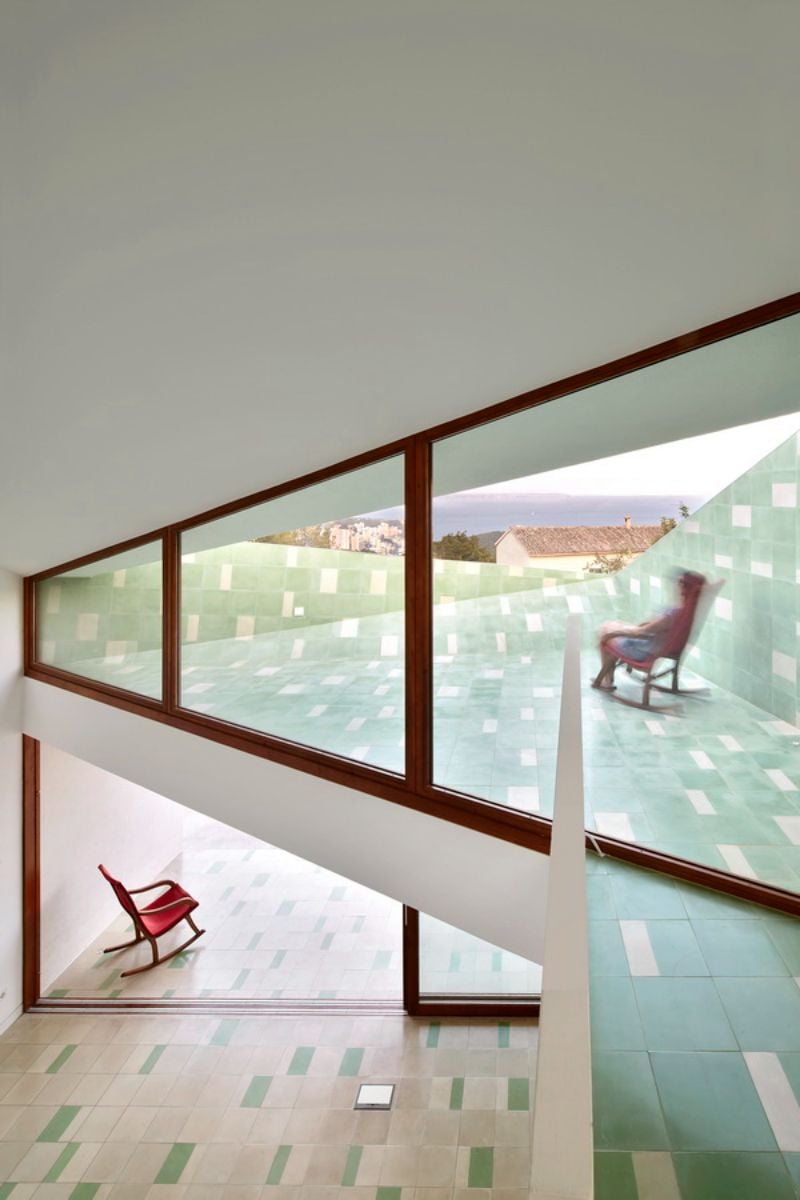 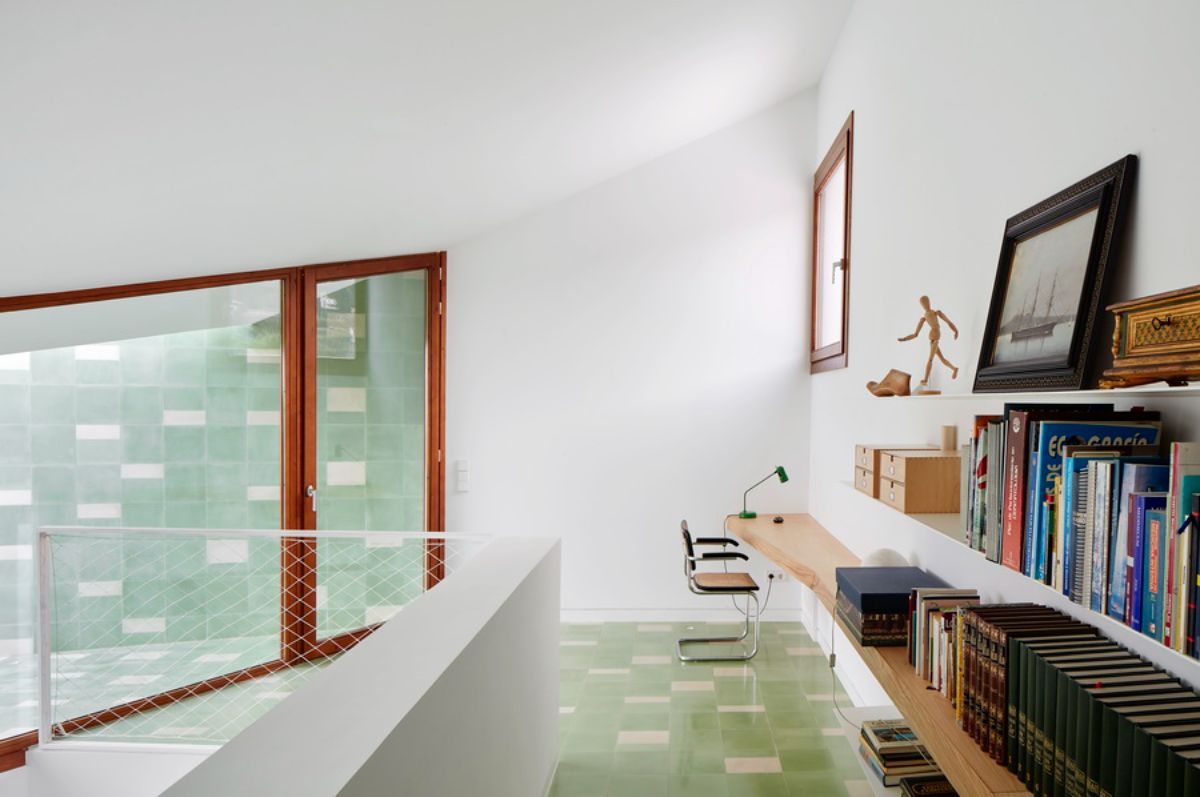 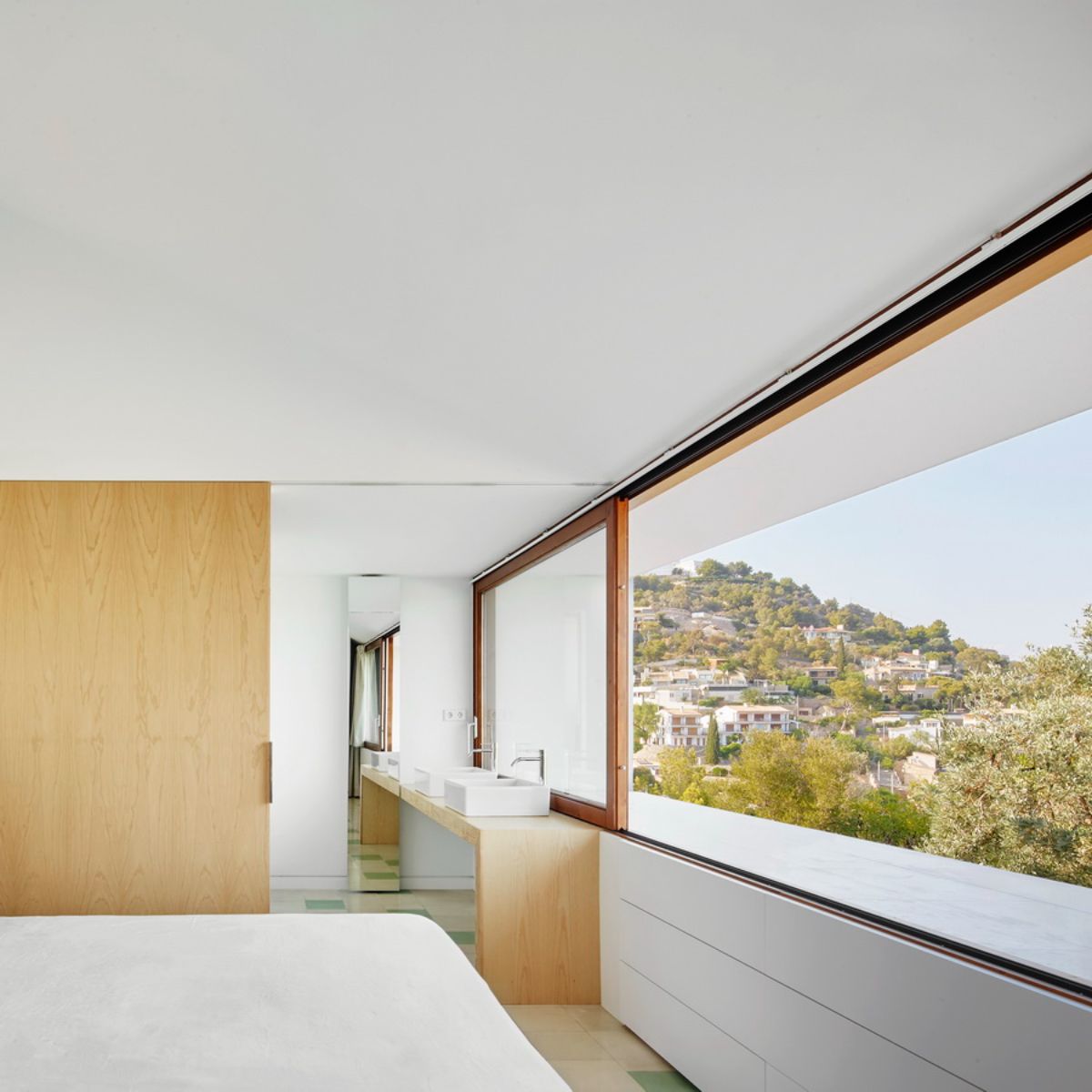 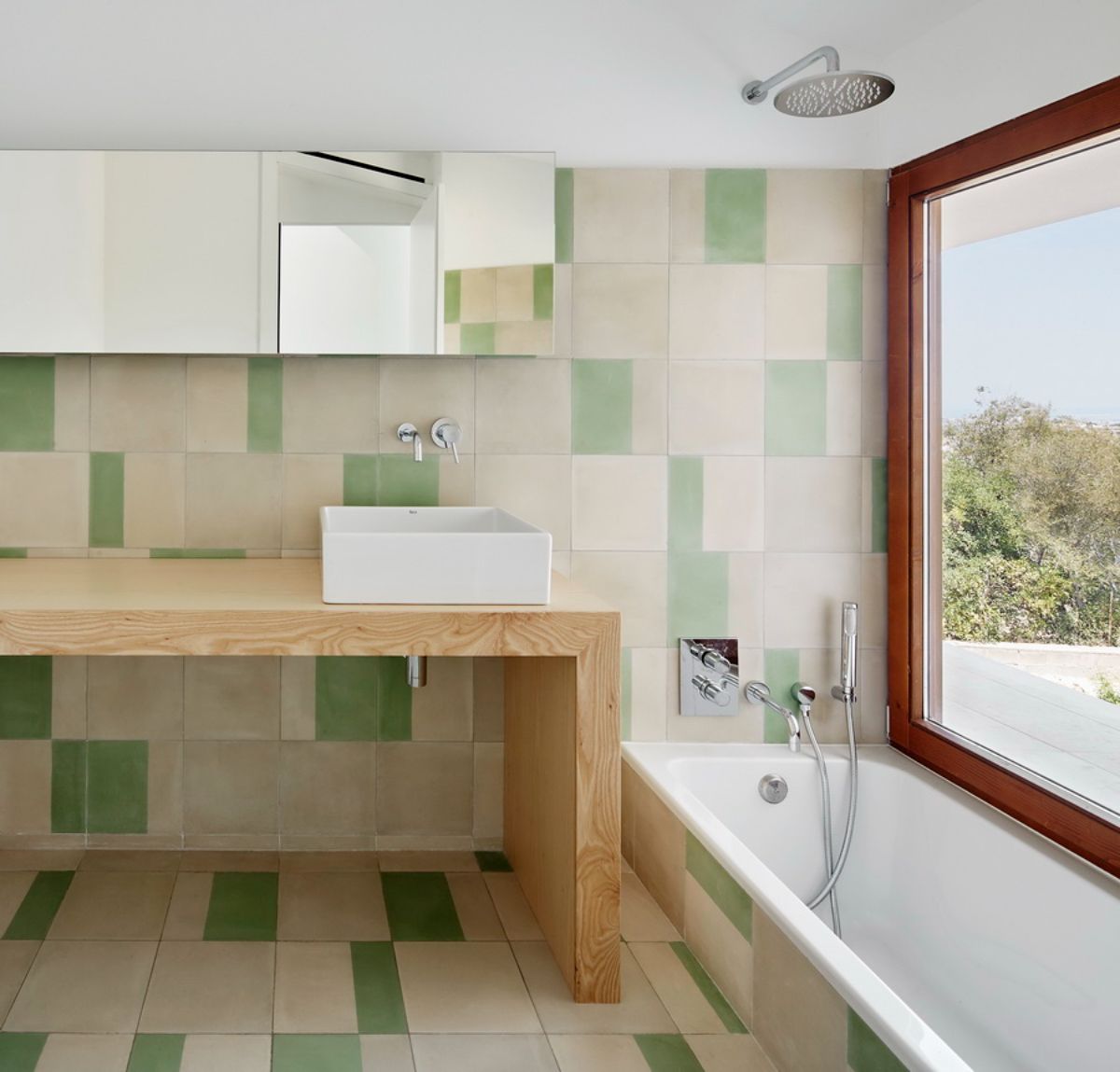 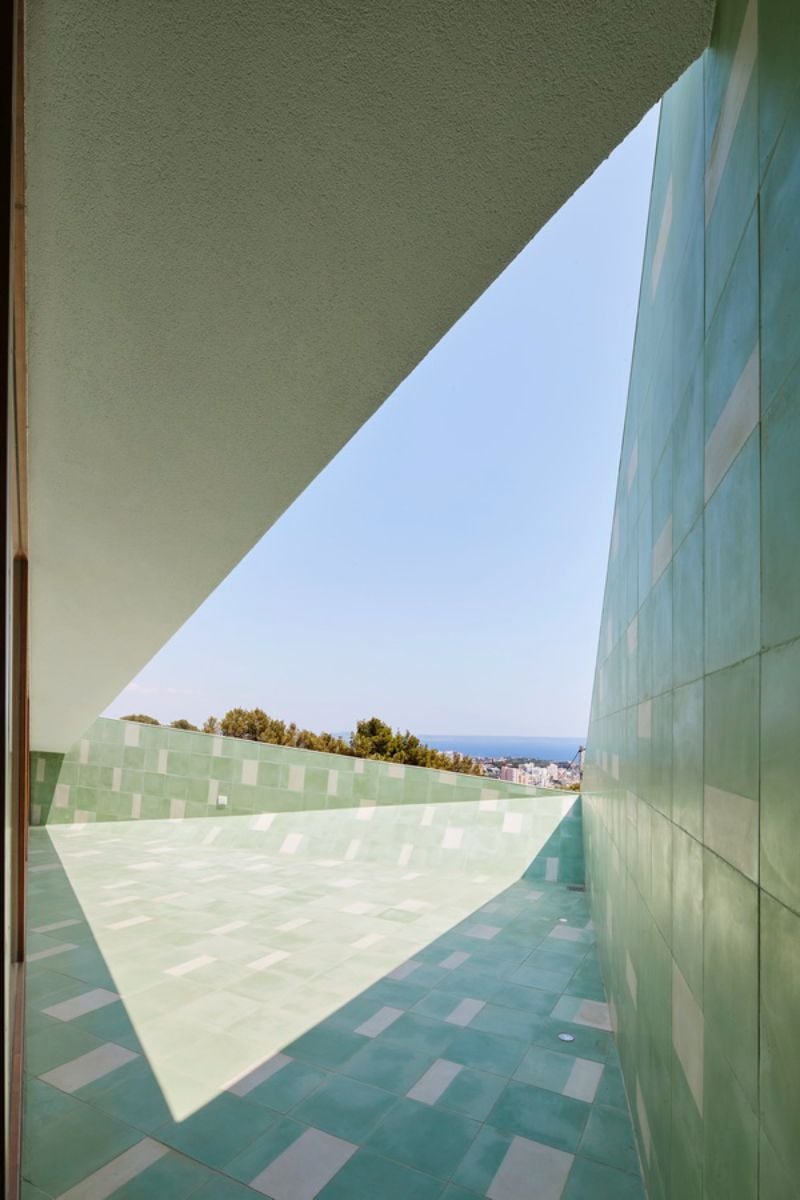 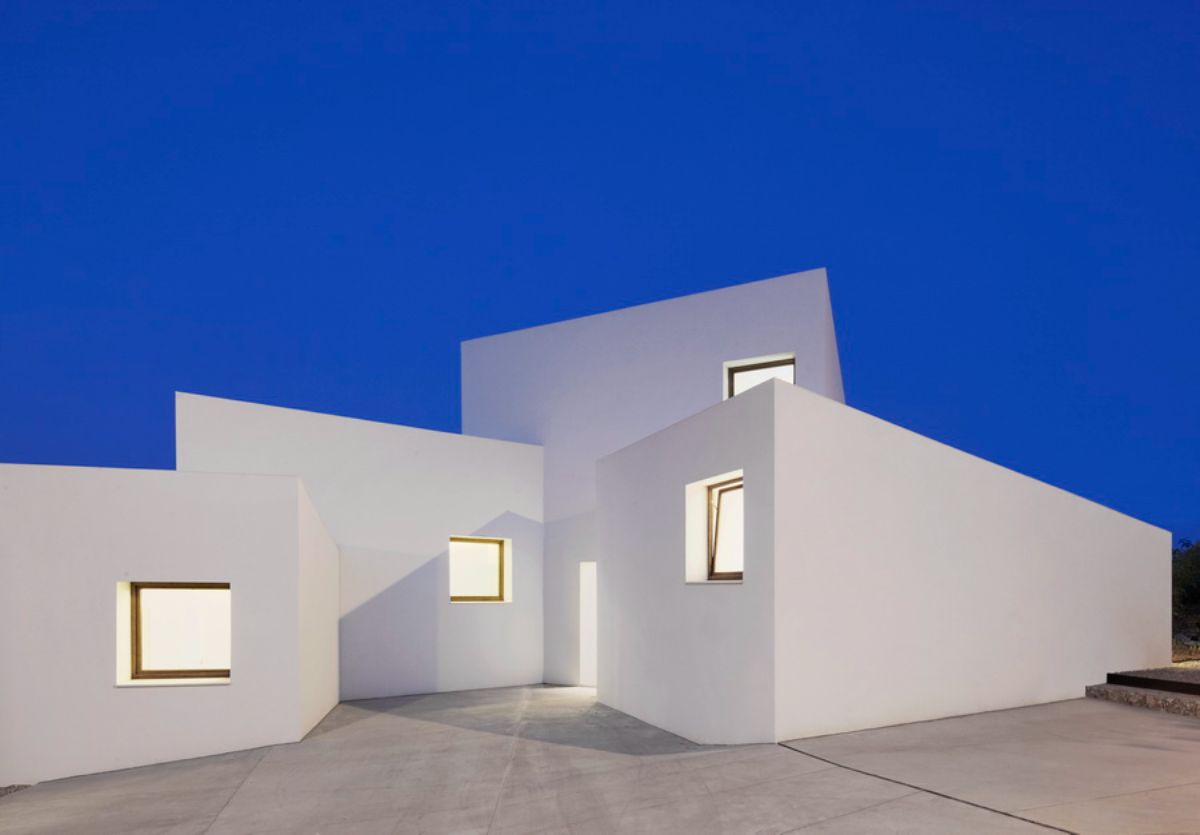 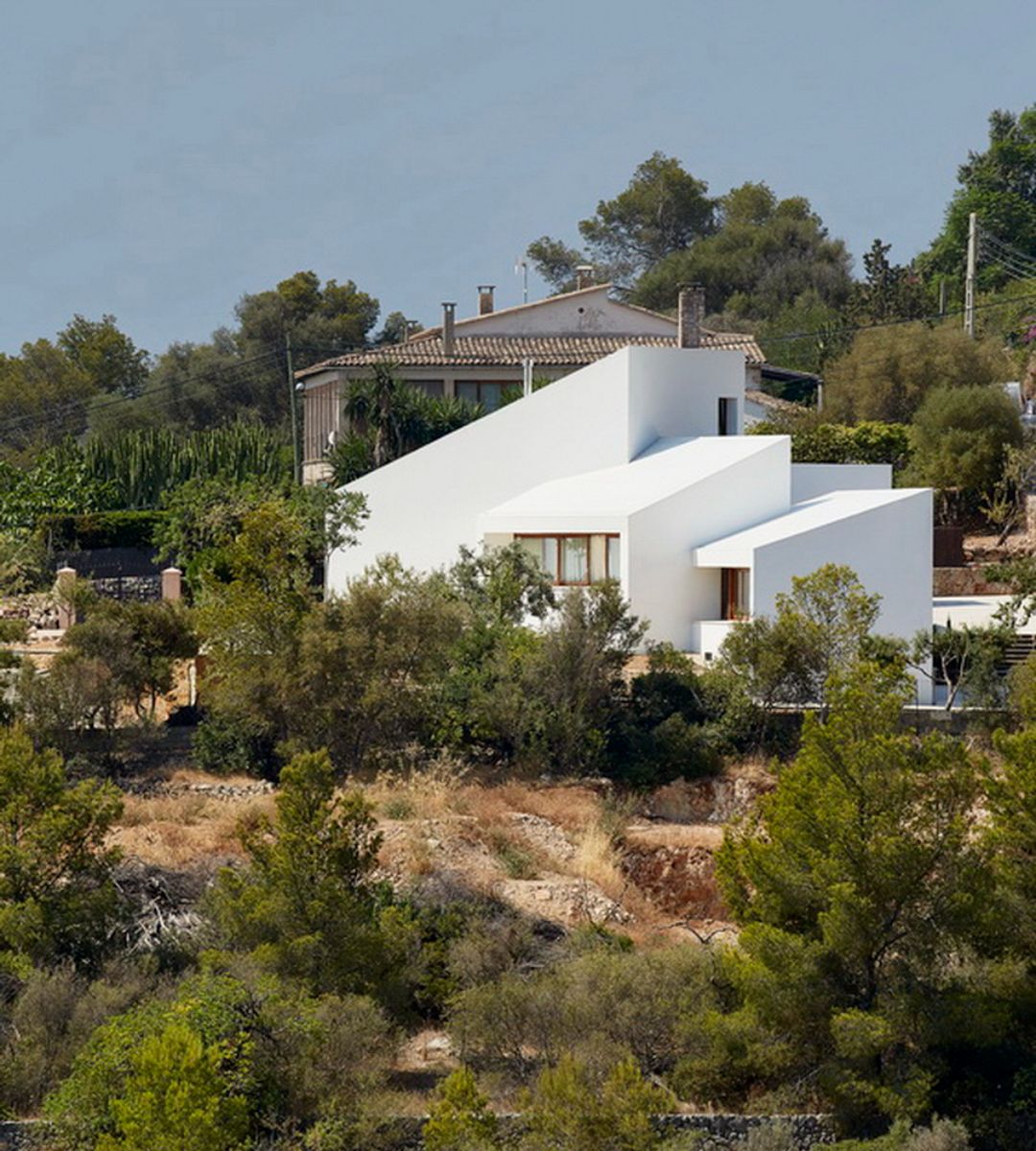 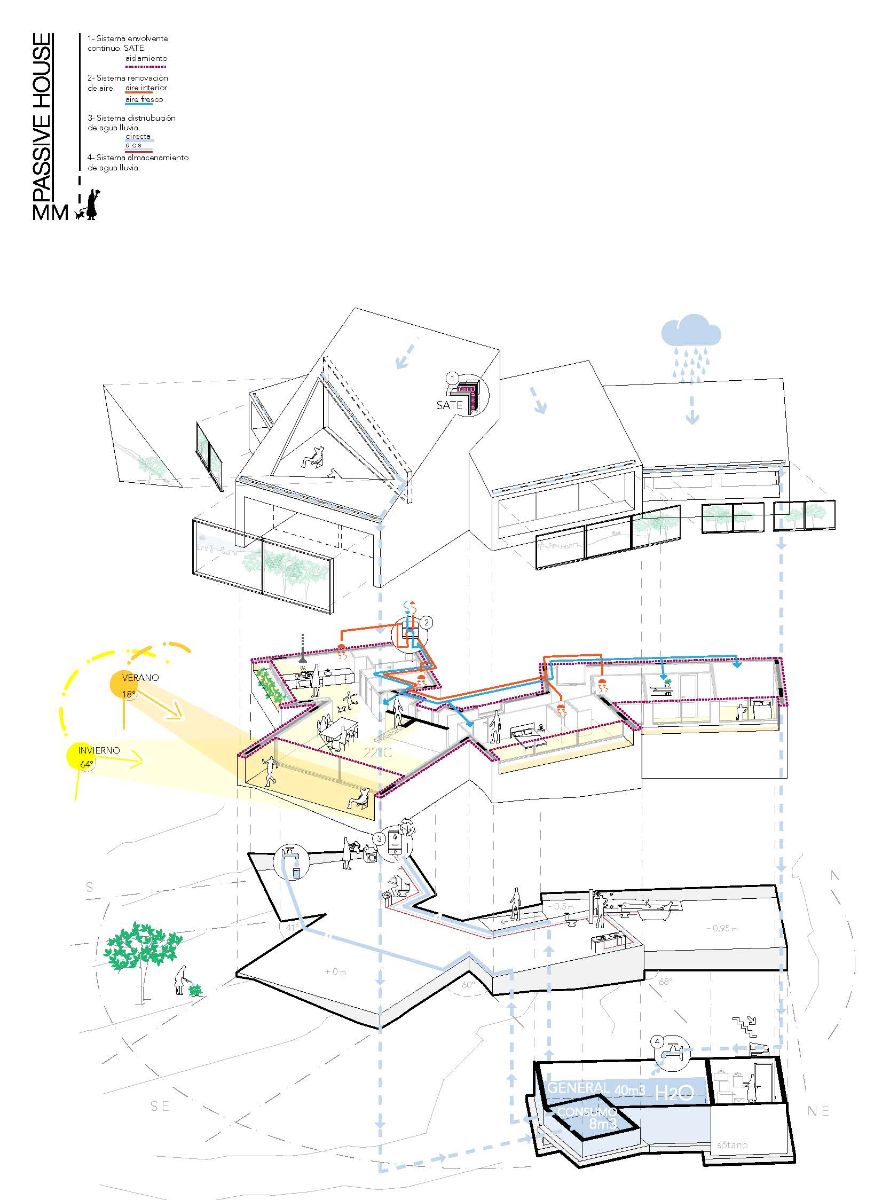 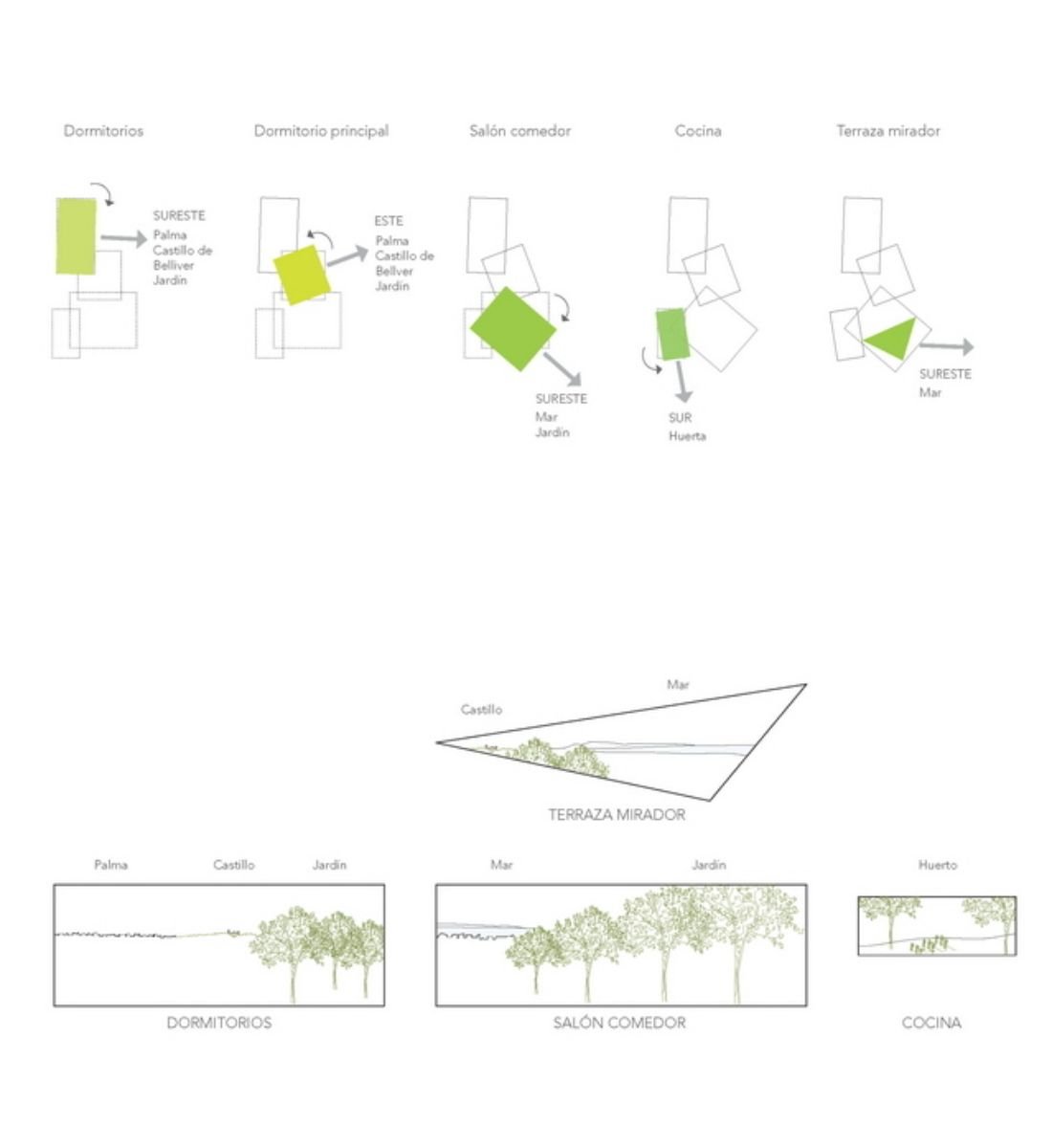 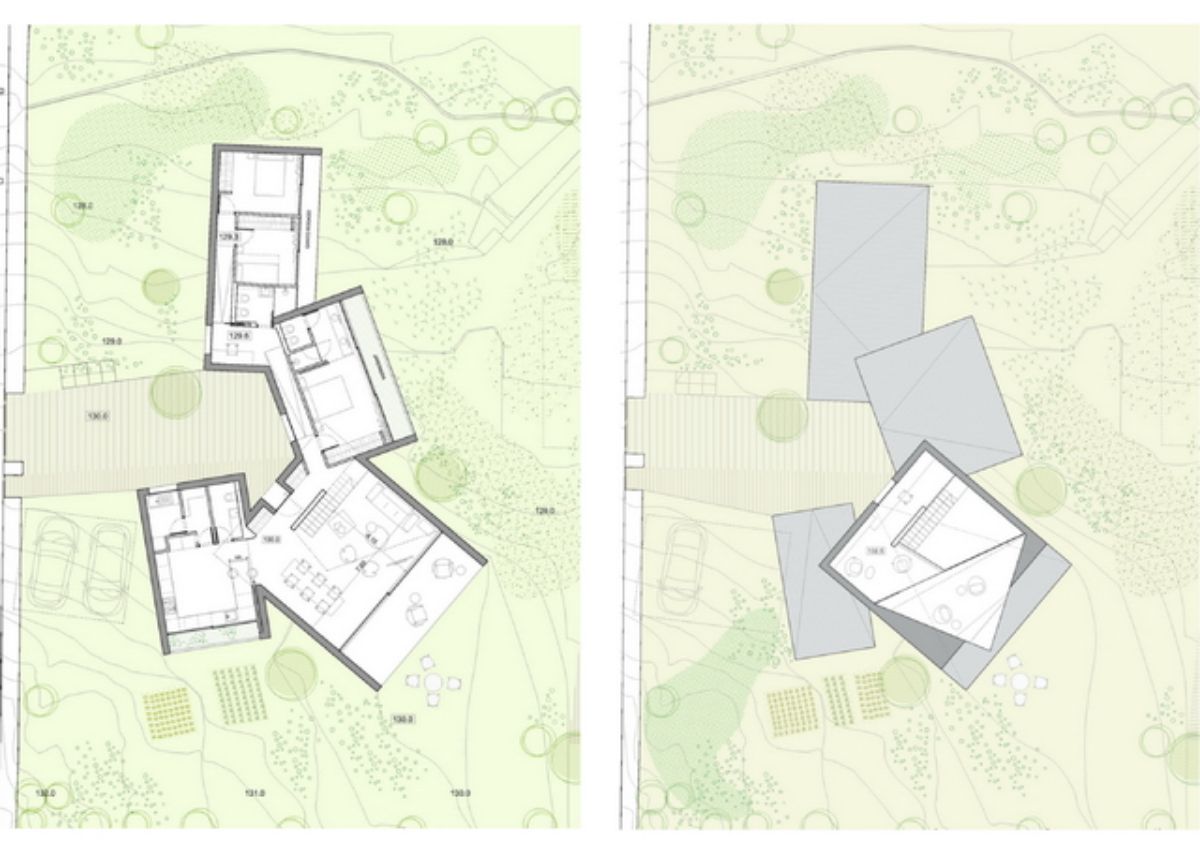 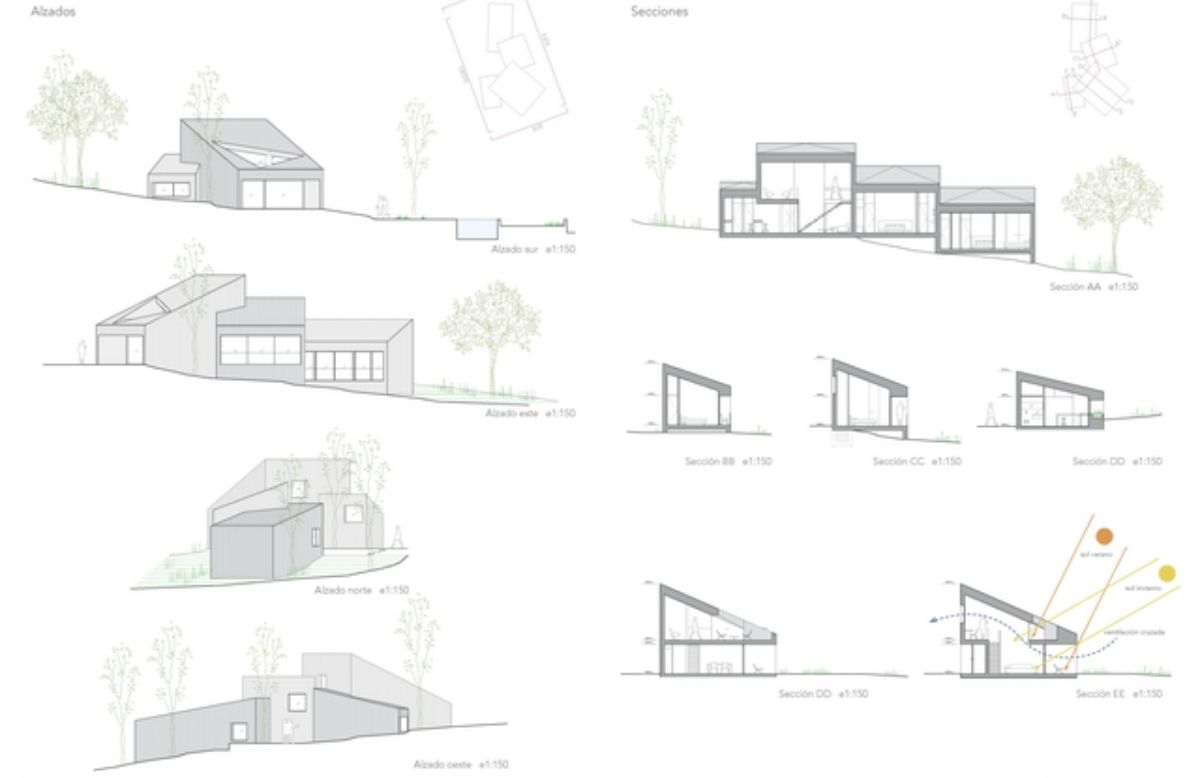 This house looks for the maximum energy efficiency adapting itself to the program, the solar orientation, the views and the slope of the terrain.

The project optimizes the program grouping it in four boxes –kitchen, living-dinning, main bedroom and guest bedrooms- which can be used together or independently.

Each box is placed carefully on the ground and rotates on its axis with precision to find the best views and orientation for their use.

The bedrooms face the East, the garden and the Bellver Castle; the living and dinning room face South-east, the sea and the garden; the kitchen faces South and the vegetable garden; and in the attic over the living room, the terrace looks towards the view of the sea and its big window over the living room faces South allowing the winter sun to warm the main space of the house while the eaves of the roof protects from the summer sun.

Each box has large openings towards the best orientations and sights, and smaller openings on the opposite façade allowing cross ventilation and taking advantage of the East-West breezes of the place.

The South openings are recessed to let the sun enter in winter and block it in summer, while the East and West openings have exterior shutters. The house has been designed according to PASSIVHAUS standards to achieve the maximum energy efficiency.

A rigorous infographic and thermal study has been made to ensure an optimal heat input, maximizing it in winter and minimizing it in summer.

The façade has an exterior insulation system that increases the insulation thickness up to 15cm and strictly guarding all joints to completely avoid any thermal bridge.

The infiltrations through the façade have been reduced to the minimum, and the hermeticism of the enclosure has been maximized to overcome pressurization tests in every space.

The heat exchanger ensures air renovation wasting no energy and it is optimized to use the heat generated with showers’ steam and cooking to transform it into heating.

Thanks to this design cooling is not necessary, which is typically an issue in the hot days of Mallorca’s summer, and the heating demand is only 11kWh/m2a (a typical house of this characteristics in Mallorca would have a heating demand of 85 to 100 kWh/m2a) which is solved with a small perimeter underfloor heating circuit.

The energy to heat the hot water is obtained almost entirely from the solar thermal installation. The pitched roofs have a system for collecting rainwater, three of them get water for irrigation and general use while the fourth roof is “the clean one” and collects water for consumption.

For this purpose two separate tanks, one of 40 m3 and another 8 m3, are arranged taking advantage of the gaps created between the housing and the slope of the terrain. With this measures the house is completely autonomous in terms of water.

The garden includes a vegetable patch, low maintenance native vegetation and deciduous trees along the south of the house to protect from the summer sun. The project has been made with a low construction budget and a very low cost of energy maintenance.

It is a home that promotes environmental and sustainability values, reporting savings and comfort without incurring additional economic effort.

The house was finished last September and monitoring its performance has been key to value the results beyond the happiness and satisfaction of the clients.

As of April the clients have not turn on the heat at all reporting an interior temperature (measured daily –day and night) for the winter between 21ºC to 24ºC, with exterior temperatures between 5º to 15º.