The home that actress, songwriter, singer, and musician Miley Cyrus once owned near the Disney Studios in Toluca Lake, California, recently sold for 5.995 million. It features six bedrooms, seven bathrooms, a large swimming pool, home theater, and a large chef's kitchen with plenty of space for entertaining. 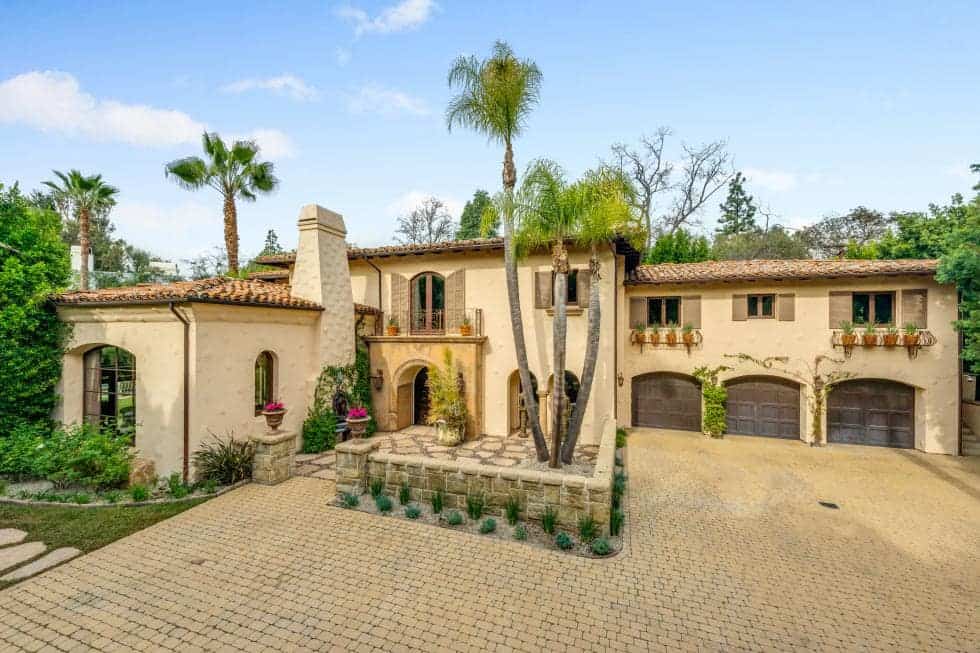 Born in 1992 to Tish Cyrus and country superstar Billy Ray Cyrus, Miley Cyrus propelled to fame as the child star of the Disney hit series, Hannah Montana. Miley, who is the God-daughter of country music legend Dolly Pardon, has penned, sang, even played guitar, on her many hits in an array of genres, from country to pop, hip hop, experimental, and rock music.

Some of her most recent hit songs include, “The Climb, “Wrecking Ball,” and “Party in the USA.” She has landed several music awards, including MTV’s Best Artist of 2013 Award and an MTV Movie Award for Best Song From A Movie for her song “The Climb” in 2009, along with tons of nominations for more of her amazing songs. 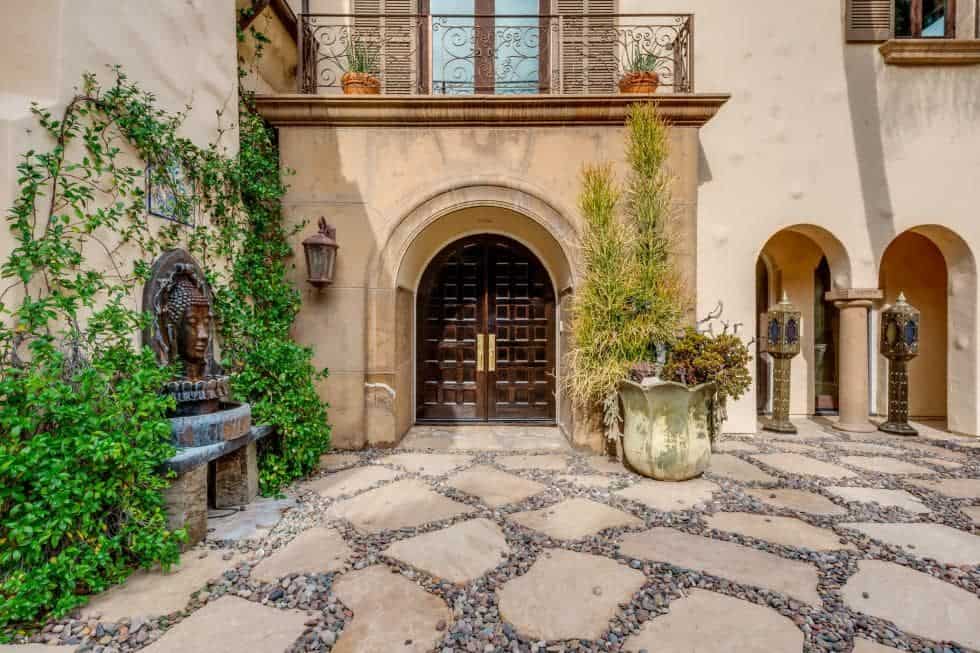 This is a close look at the main entrance of the house with an arched entryway fitted with dark wooden double doors. This is then complemented by creeping plants and potted plants on both sides. Image courtesy of Toptenrealestatedeals.com. 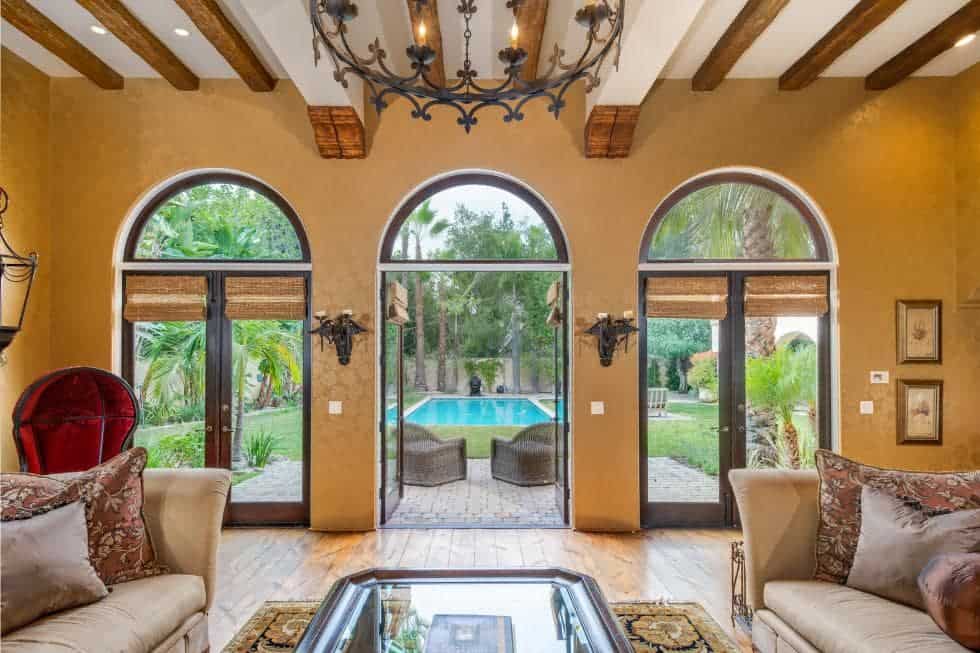 This is the bright and airy living room with a row of tall arched entryways fitted with glass doors that lead to the backyard. These serve as a nice background for the pair of beige sofas flanking a glass-top coffee table. Image courtesy of Toptenrealestatedeals.com. 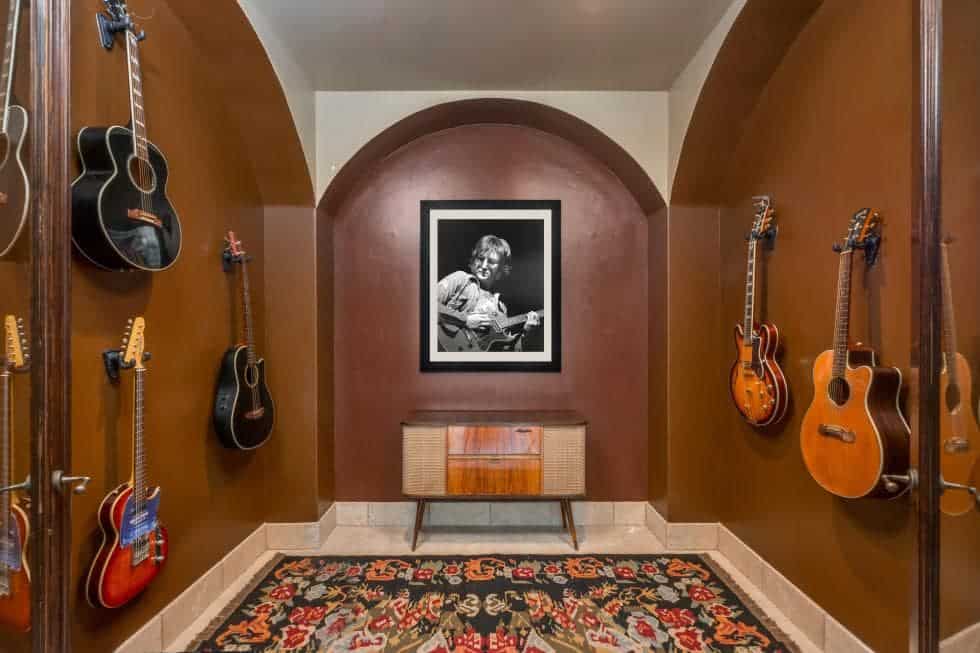 This is the guitar display room with various guitars mounted on the dark brown walls with arches and alcoves. Image courtesy of Toptenrealestatedeals.com. 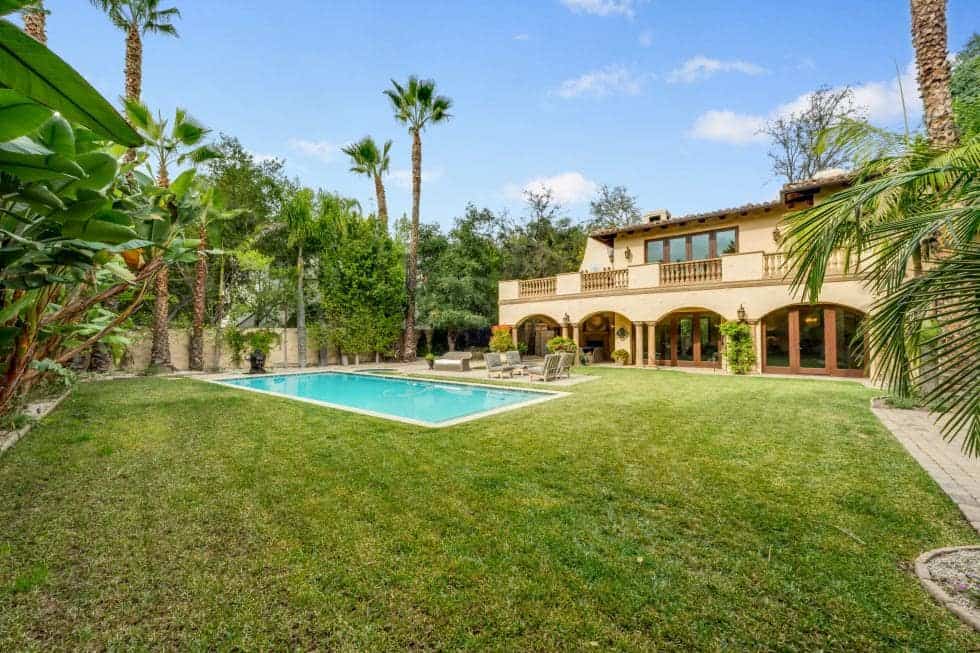 This is the back of the house with a large grass lawn that surrounds the swimming pool. You can also see here the tall trees that complement the beige earthy exteriors of the house. Image courtesy of Toptenrealestatedeals.com.

Miley was actually named Destiny Hope Cyrus at birth but gained the nickname Smiley Miley because of her happy disposition. She was born in Franklin, Tennessee, and raised on a farm outside of Nashville. She legally changed her name to Miley Ray Cyrus in 2008. She bought a gorgeous property in 2009 that was once owned by actor Freddie Prince Jr. The home, located in Toluca Lake, California, recently sold for at the initial asking price of $5.995 million.

To enter the beautiful 8,700 square-foot Tuscan-style home, you walk through an arched entryway that is adorned with large, double doors made of dark wood that is surrounded by greenery. The large, open living room features glass doors that allow plenty of natural light into the room. A guitar display room features a variety of different types of guitars that are mounted on the dark-brown walls that feature an archway and several alcoves.

The six-bedroom home, including a primary bedroom that features a roof-top terrace with a large fireplace, a walk-in dressing room, and a master bathroom, offers six more bathrooms along with the grand entry foyer and a curved staircase with wrought iron railings. Several formal rooms allow plenty of space for entertaining and any cook would be happy to create delicious dishes in the huge chef’s kitchen with granite countertops. Friends and family can hang out in the family room or catch a movie in the home theater.

The large glass doors in the living room lead to a beautiful backyard that features a swimming pool and plenty of outdoor living areas. Gorgeous trees align the long, brick driveway and motor court area and are very welcoming to visitors.

The house, which was designed by architect Bob Easton, offers an Old World look and feel with vines that creep up the side of the main house and a red-barrel tile roof. This property is located in a secure gated community on about an acre of land. The studio is located close to the Disney Studios where Miley once worked on the set of Hannah Montana. She placed the house on the market in 2015.