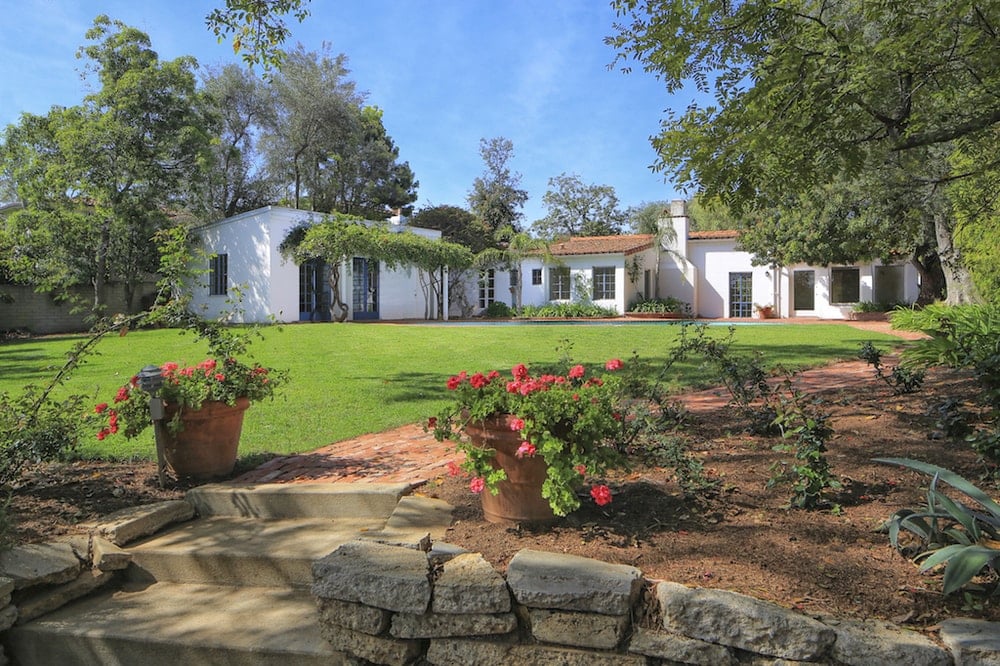 If you had to write a list of top Hollywood icons, Marilyn Monroe would be close to the top. The blonde bombshell was only a star for about a decade, but her spirit captured the attention of the public. Own a piece of Hollywood history with her L.A. estate.

These days, movie stars are a dime a dozen. While some actors can rise above the fray, they don’t command as much of a following as they did during Hollywood’s golden age. Although her filmography only spanned a decade, Marilyn Monroe quickly became an icon. She was the “it” girl of the 50s, and she showed poise and grace at all times. Now you can own a piece of L.A. history by buying Monroe’s former estate.

What We Liked Most About the Home

If you had to picture what an Old Hollywood home looked like, this property would be it. Pristine white stucco walls, earthy brick tile patios, an outdoor swimming pool, a small orchard, and plenty of space inside. It’s no wonder that the blonde bombshell fell in love with this house at first sight. Interestingly, this was the only property that Monroe purchased, which she did shortly before she died in 1962.

Although this estate isn’t as flashy as newer homes in Hollywood, it still maintains much of that Golden Age charm. Few elements have been updated since Monroe lived here, so you can get a sense of the history within its walls. The home was built in 1929 in the hacienda style. We appreciate the blending of southwestern architectural elements, such as vaulted ceilings with exposed wood beams (called vigas), and multiple fireplaces. One of the central fireplaces has Mexican tiling around the edges, adding some cultural flair to the otherwise bare walls.

This estate does come with a citrus orchard and a guest house, making it a perfect summer getaway. The pool is small but not too much and is ideal for relaxing under the L.A. sun. Overall, we appreciate this house for what it is and what it isn’t. Simple, elegant, and classy, just like Monroe herself.

Monroe’s story doesn’t start with glitz and glam. In fact, for much of her adolescence, she had it pretty rough. Born in L.A., Monroe’s original name was Norma Jean Mortenson. She spent most of her childhood in orphanages and foster homes until she got married at 16. Her rise to stardom began with a chance encounter with a photographer in 1944 at her factory job. Although Mortenson didn’t look anything like what she would become (she was a natural brunette), she had plenty of potential.

Her early career wasn’t exceptional, but once she crafted her “dumb blonde” image, her star began to take off. One of her first high-profile roles was in the 1950 film All About Eve. Her turn in that movie and The Asphalt Jungle (1950) earned her a seven-year contract with Fox Studios. Even with some acclaim, Monroe’s talents were underutilized, as the studio leaned into her sex appeal more than her acting ability.

By 1954, Fox was unsure if they wanted to continue her contract, so Monroe founded her own production company. In 1955, she starred in The Seven Year Itch, which became one of the biggest box-office successes of her career. She continued to work on her craft and broaden her range. Even though the studios didn’t care much about her talent, she forged ahead and got rave reviews for many of her films.

Monroe’s star status was hot off the screen as well. She divorced her first husband in 1946 as her career started, and then married former New York Yankee Joe DiMaggio in 1954. Their marriage lasted less than a year. Her third and final marriage was to Arthur Miller in 1956, although the couple split in 1961. After that divorce, Monroe bought her Brentwood home. Despite being tabloid fodder for most of her career, Marilyn Monroe continues to be a Hollywood icon. She showed the industry what women were capable of, and she’s an inspiration to women everywhere.