A two-story Brooklyn mansion once owned by nineteenth-century entrepreneur John Tracy is now on the market for a mere $13 million. This elegantly-designed home boasts 23 rooms and nine bathrooms. It even comes with a billiards room. Check out the highlights of this historic home and discover its charm. 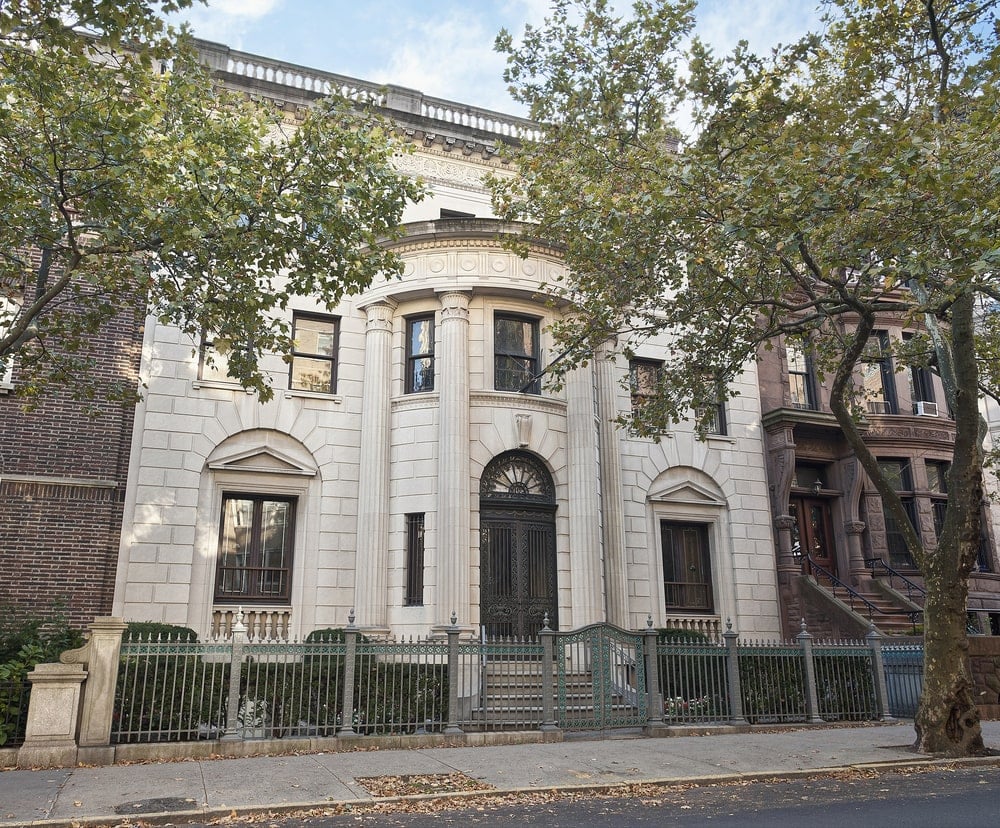 $13 million. That’s the asking price for late nineteenth-century entrepreneur John Tracy’s behemoth home in Brooklyn, NY. By the way, in case you’re curious, the pad was originally listed at $25 million, so it’s come down a bit to attract more prospective buyers.

The 9,788 square-foot home has 23 rooms — and nine bathrooms. An iron gate opens onto the palatial main entrance. Circular steps lead to a wrought-iron door, which is flanked by four Corinthian columns. With its elaborate design, the front of the house is somewhat reminiscent of ancient Greek architecture.

The transom window over the door adds an extra element of style to the exterior. With its beige walls, the small marble foyer highlights the dark outlines of the door, accentuating the natural light that pours in between the grillwork.

A set of French doors connect the foyer to the living room. Here, black leather chairs and sofas form a cozy semi-circle around the fireplace. A dark-paneled staircase leads to the home’s second floor. The other end of the room leads to the rest of the first floor. First-floor common rooms are decked out with book-matched Honduran flame mahogany paneling. The second floor features flame maple paneling.

The family room, which would have been called a sitting room in the nineteenth-century, also comes with a fireplace and is furnished with sofas, chairs, and end tables.

In the high-ceilinged formal dining room, you’ll find hardwood floors, dark wood paneling, and similarly-toned ceiling beams. The dining set matches the walls and floor. A light area rug matches the color of the sections of the ceiling that aren’t intersected by beams.

What makes this home somewhat unique is that it has a billiards room, with a chandelier hanging from the ceiling. The floor is dark hardwood, and the darker-hued walls go well with the rest of the room.

John Tracy was originally from Kingston, NY but spent most of his adult life in Brooklyn. Alongside his two brothers, Thomas and Michael, he got involved in shipbuilding and towing businesses. He also helped to organize the Maritime Association of the Port of New York.

In the 1880s, he and his brothers found incredible success with their enterprise,  M&J Transportation Company, a firm that operated barges and tugboats. Besides his business accomplishments, he also had a reputation as a philanthropist, giving away sizable sums to hospitals and entities serving seniors and the poor. He died in 1931 at age 76.