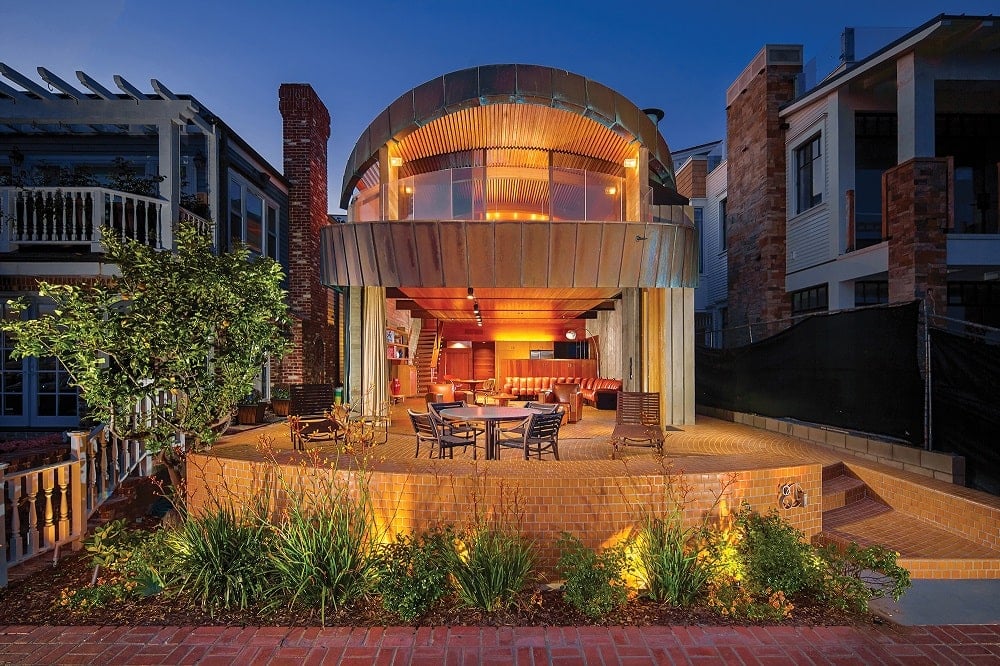 Looking for a house on an island? With a must-have elevator? Are you a fan of midcentury modern and Googie architecture? Look no further than the iconic John Lautner "Jaws" house on Balboa Island in sunny Newport Beach in CA. Read on to find out how much this stunner is worth.

When it comes to unique, iconic examples of midcentury modern homes, it’s hard to find one quirkier than John Lautner’s “Rawlins House” on Balboa Island in Newport Beach, CA.

Built in 1979 as a retirement home for physicist Bob Rawlins and his wife Marjorie, a musician, who both loved the midcentury style, but were looking for something a bit more interesting when they moved out West, the one-of-a-kind Rawlins House is now referred to fondly as the “treasure of Balboa Island”.

Due to its whimsical design, often described as looking like an open-mouthed shark or whale, it’s also called “Jaws” by neighbors.

John Lautner was their architect of choice for many reasons. He had studied with the renowned world-famous midcentury modern visionary architect Frank Lloyd Wright in the 1930s, but more importantly, the Rawlins liked his specific architectural style, especially his Googie designs.

Googie style is kind of a mash-up of classical midcentury modern style and futurism inspired by the Atomic Age and the Space Age. The Rawlins house meshes both design styles with its bold use of glass and wood, its curvaceous exterior aesthetic, the spare, sleek minimalistic lines, the open concept, and its celebration of indoor/outdoor living.

The Rawlins House is considered one of Lautner’s most memorable urban designs by architectural critics. Located on South Bay Front in Newport Beach Harbor, the modernistic domed residence, sporting notable architectural features like a stunning copper balcony and roof, is the perfect retreat for entertaining friends and celebrating the sunset beach-side over dinner and drinks or welcoming overnight guests.

The futuristic midcentury 2,100 square foot home boasts three bedrooms and two and a half bathrooms with an open floor plan. The spacious living room is built around a massive curved sofa that faces a sleek wall with hovering wood shelves and a direct view of the water through a floor-to-ceiling glass wall.

Just steps from the living room is an impressive floating staircase with wood banisters and glass railings that showcase the Douglas fir ceilings, receding glass walls, and ceramic floors. The primary bedroom features a slatted wood coved ceiling that matches the wood walls and floor.

Love indoor/outdoor living? With a touch of a button, the glass walls facing the harbor recede. Designed to be the ultimate getaway, the home is the epitome of zero-transition living, with a brick patio sprawling seamlessly directly from the interior open floor plan out to the perfect spot on the 35-by-80-foot lot to watch boats cruising in the harbor. Need to get to the main floor quickly, or want to head out to the beach before the sun goes down? Don’t worry, there’s an elevator to get you from here to there fast.

John Lautner’s House was privately owned by the original owners until 2010. Since 2014 it has been listed for sale by real estate agents in the Beverly Hills and Orange County areas. Originally listed at $5,395 million, the water’s edge residence has been reduced multiple times over the years.

It was eventually purchased in 2017 for $3.772. New homeowner, Michael LaFetra, had been eyeing the property for years. LaFetra is a preservationist and architecture restorer as well as a movie producer of horror films such as Stag Night and Night train.