The Elrod House in Palm Springs is famous for many reasons like its design by John Lautner, appearance in the James Bond Film, and it was owned by Arthur Elrod. This was listed for $8 million and was purchased by fashion designer Jeremy Scott for $7.7 million.

The flower-like house is measured at 8,901 square feet on 1.22 acres of land overlooking Coachella Valley. The house consists of five bedrooms, six bathrooms, and a two-bedroom guest house with a gym. It also boasts of rosewood walls, herringbone slate floors, a great room that has a 60-foot circle with curved glass, a terrace, and a swimming pool.

The Elrod House that was designed by famed architect John Lautner and was featured in a James Bond film is listed by Kilroy Southridge Properties.

Architect John Edward Lautner was famous for his Southern California space-age designs. Perhaps the leading American designer of space-age homes, Lautner got his start working for Frank Lloyd Wright in Wisconsin and Arizona, moving to Los Angeles in 1938. He designed homes for a number of Southern California celebrities, including the Bob and Dolores Hope UFO home in Palm Springs, and was the chief architect for the 1984 Summer Olympics in Los Angeles.

One of Lautner’s most seen works was commissioned by interior designer Arthur Elrod in 1968 and used in the 1971 James Bond film, Diamonds are Forever. Built high up on a ridge in Palm Springs, the house is built around the rock ridge itself with rock rising into the interior.

Views overlook the Coachella Valley and nearby mountains. Built like a flower with opening petals rising above it and offering space for light to wash over the interior from above, the great room is a 60-foot circle with curved glass disappearing walls that open the house to the outside through a vanishing threshold. It was always party time at Elrod House.

Locally known as the ultimate bachelor pad, the house was used as a venue for many events such as a Bill Blass fashion show and a 1971 spread in Playboy, called Pleasure on the Rocks. It was a time when the bohemian lifestyle was transitioning into the Yuppie lifestyle and society partied from one end of the transition to the other. Elrod House was the perfect stage.

At 8,901 square feet on 1.22 acres, the five-bedroom, six-bath home has rosewood walls and herringbone-black slate floors in the great room where walls open to a terrace and swimming pool. There is also a two-bedroom guest house with a gym.

Originally priced at $13.89 million in 2009 and with previous price cuts, it was last listed at $8 million. The new owner, fashion designer Jeremy Scott, is reported to have paid $7.7 million for the home. 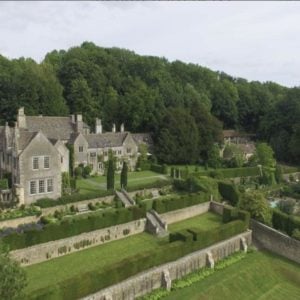 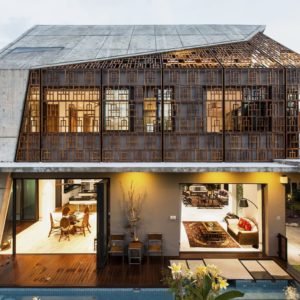