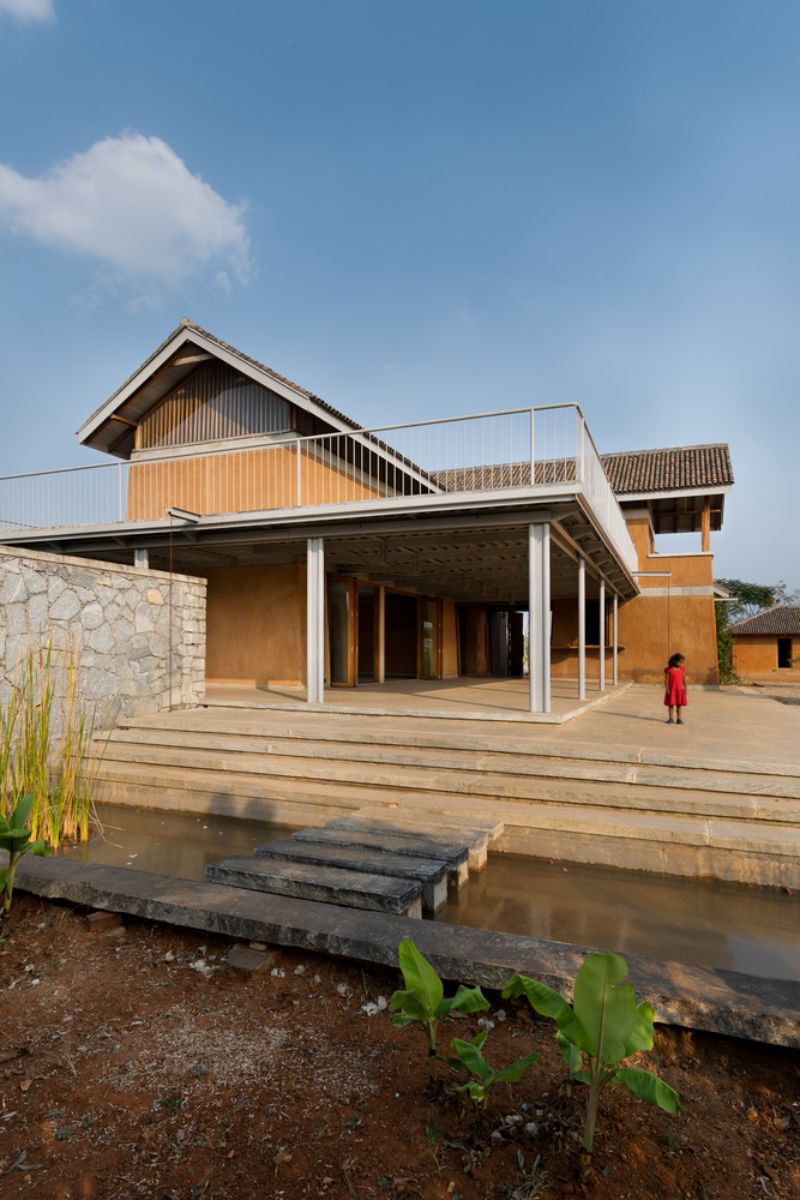 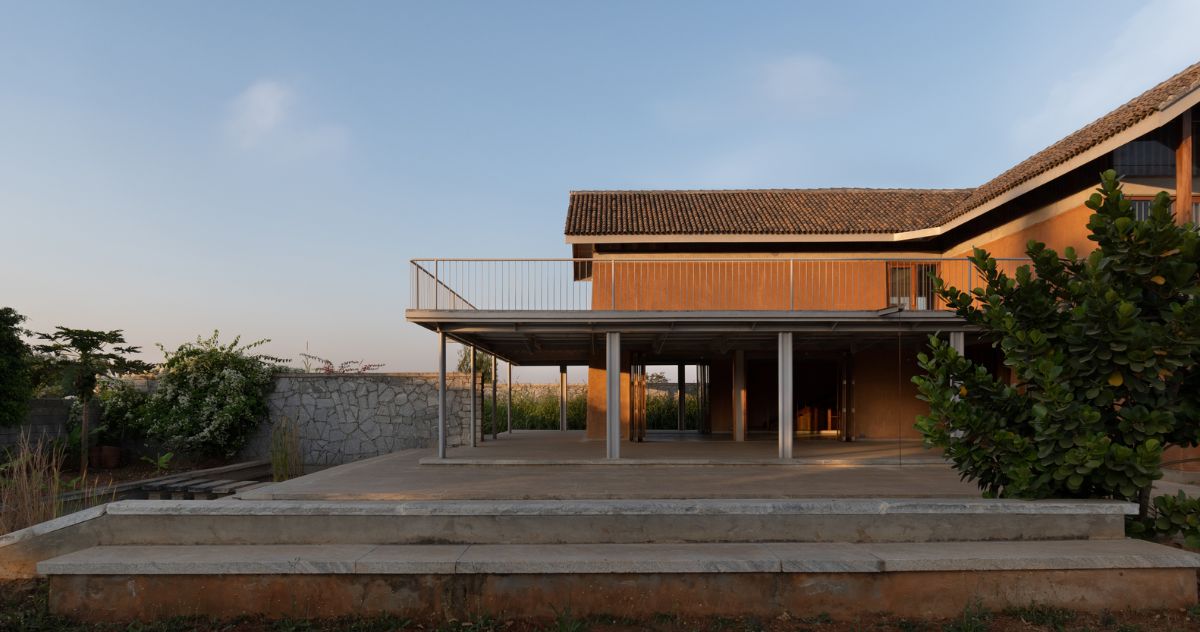 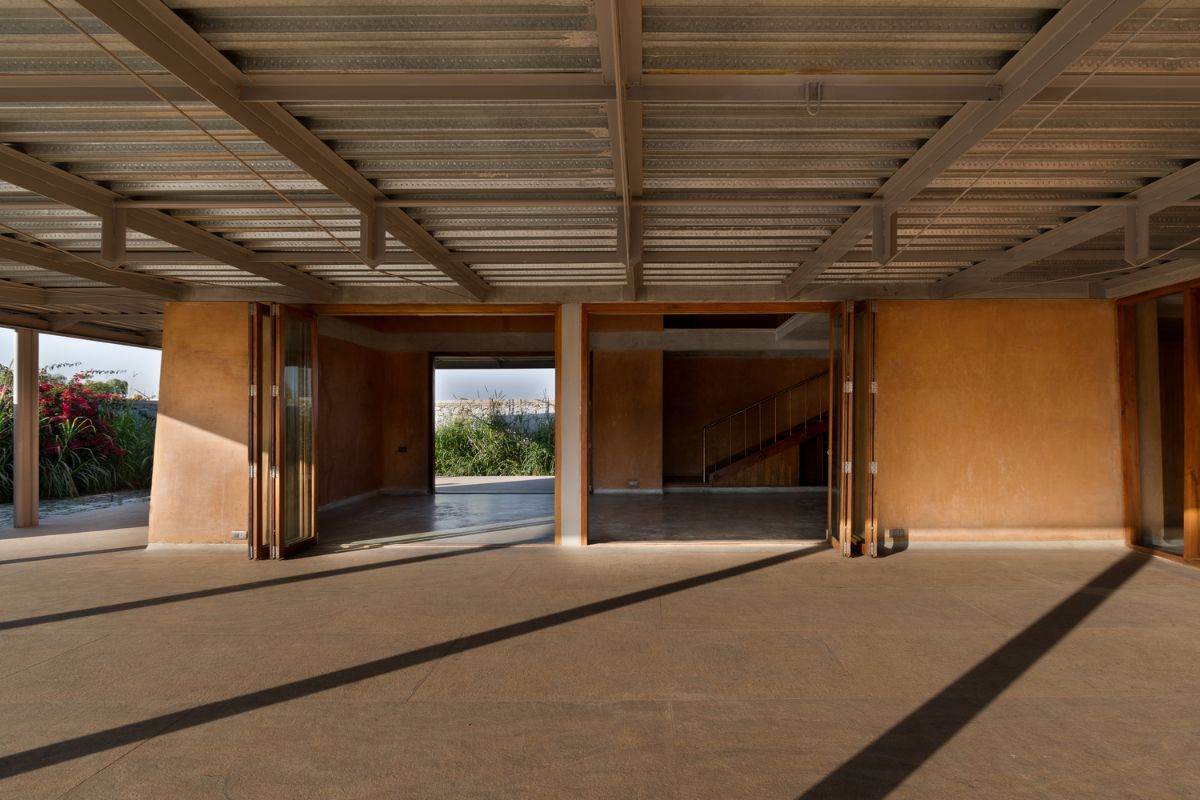 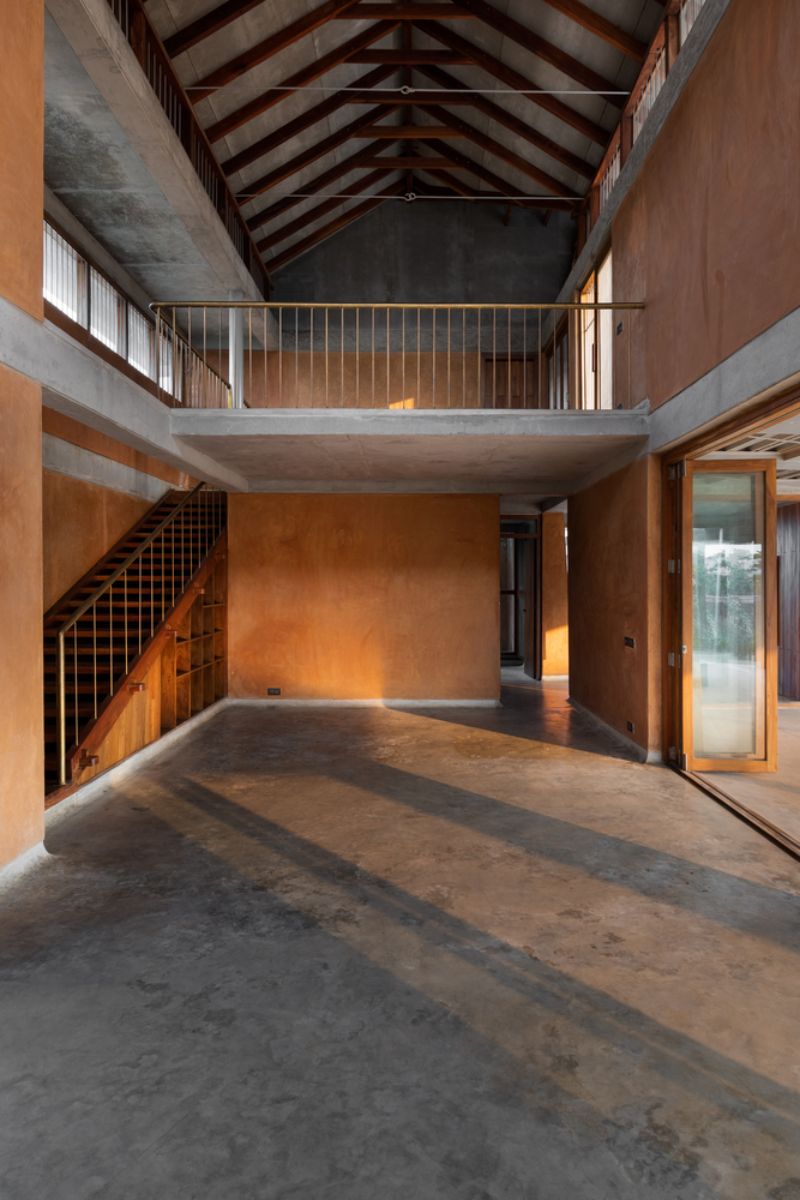 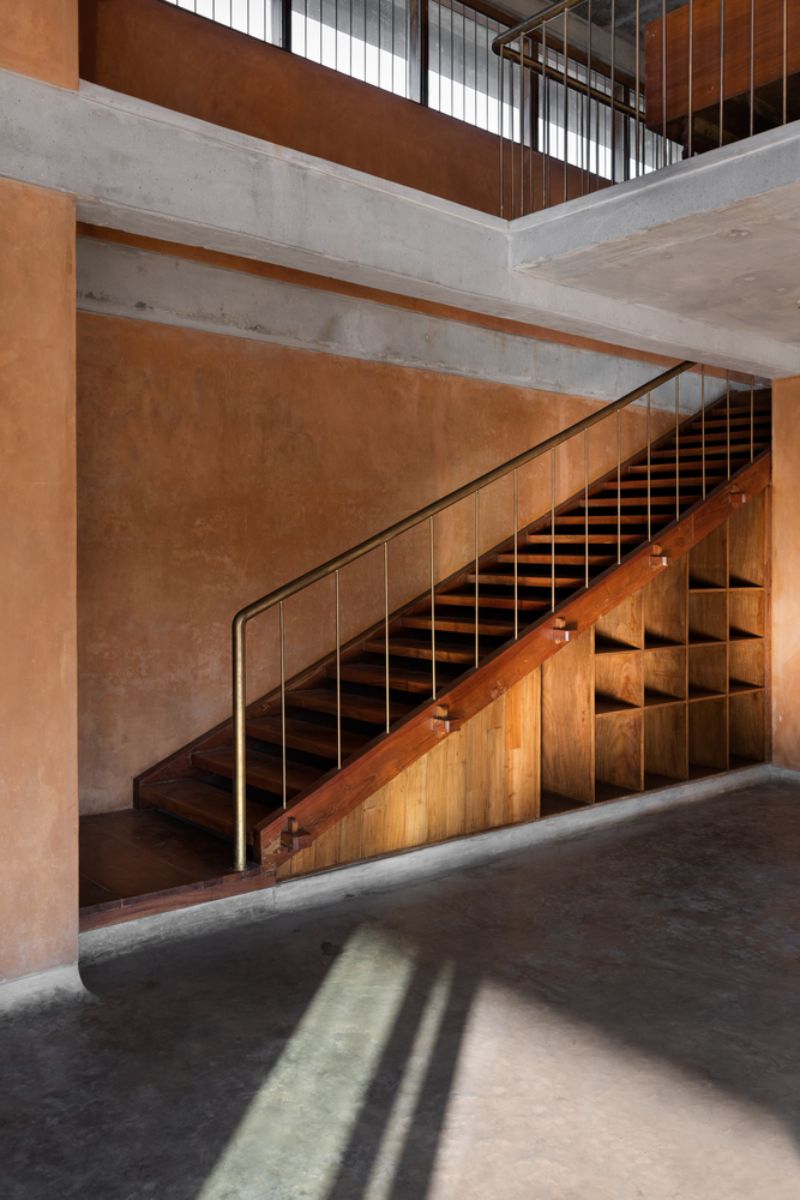 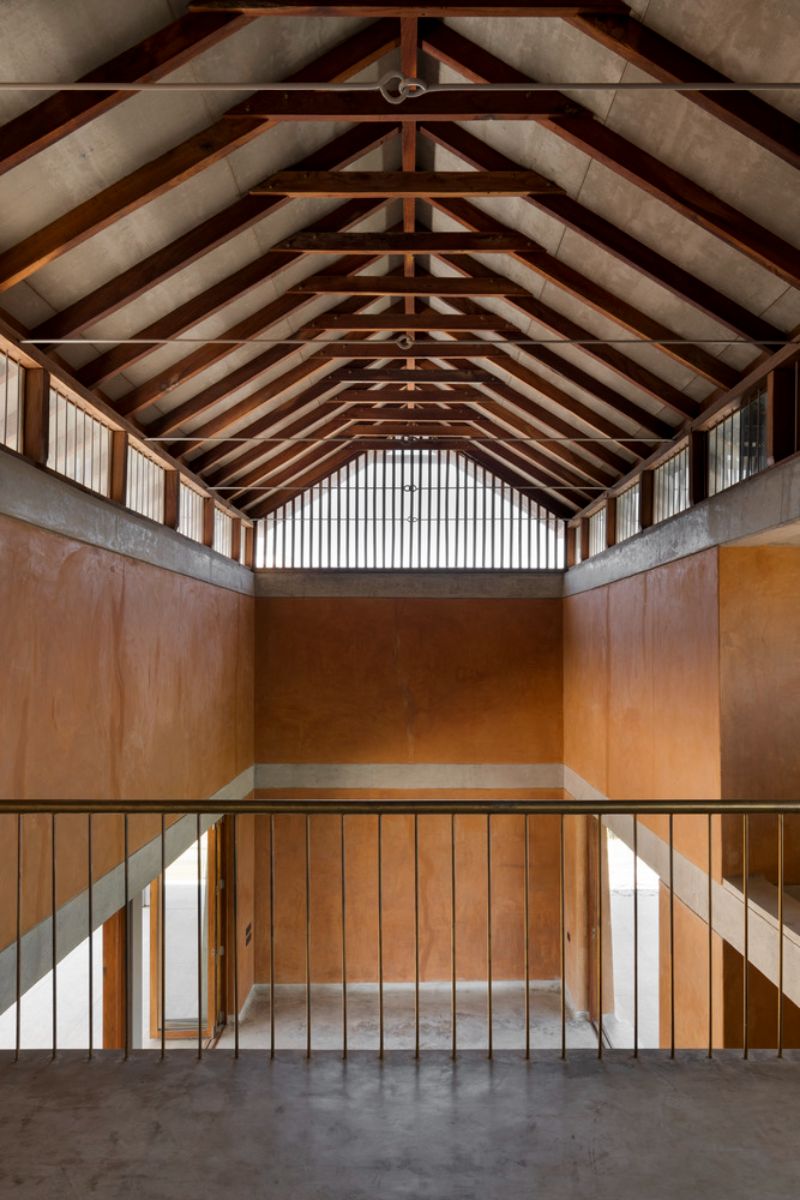 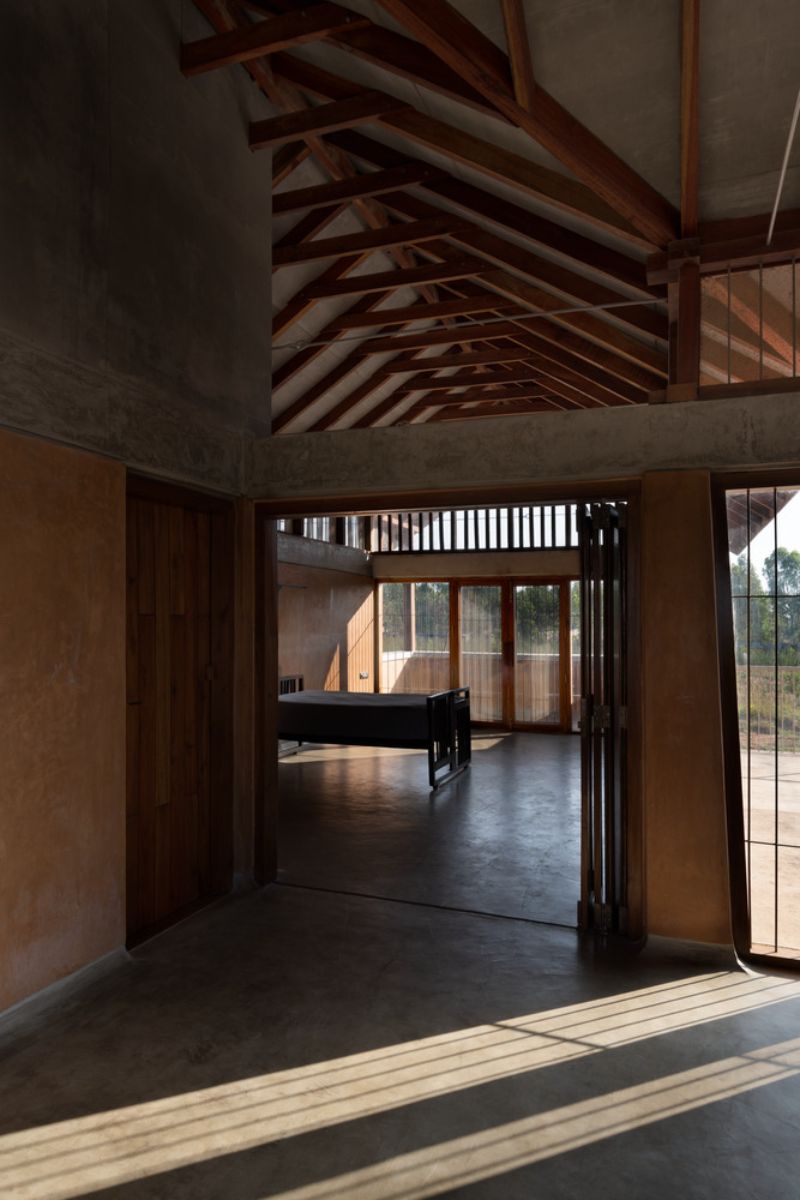 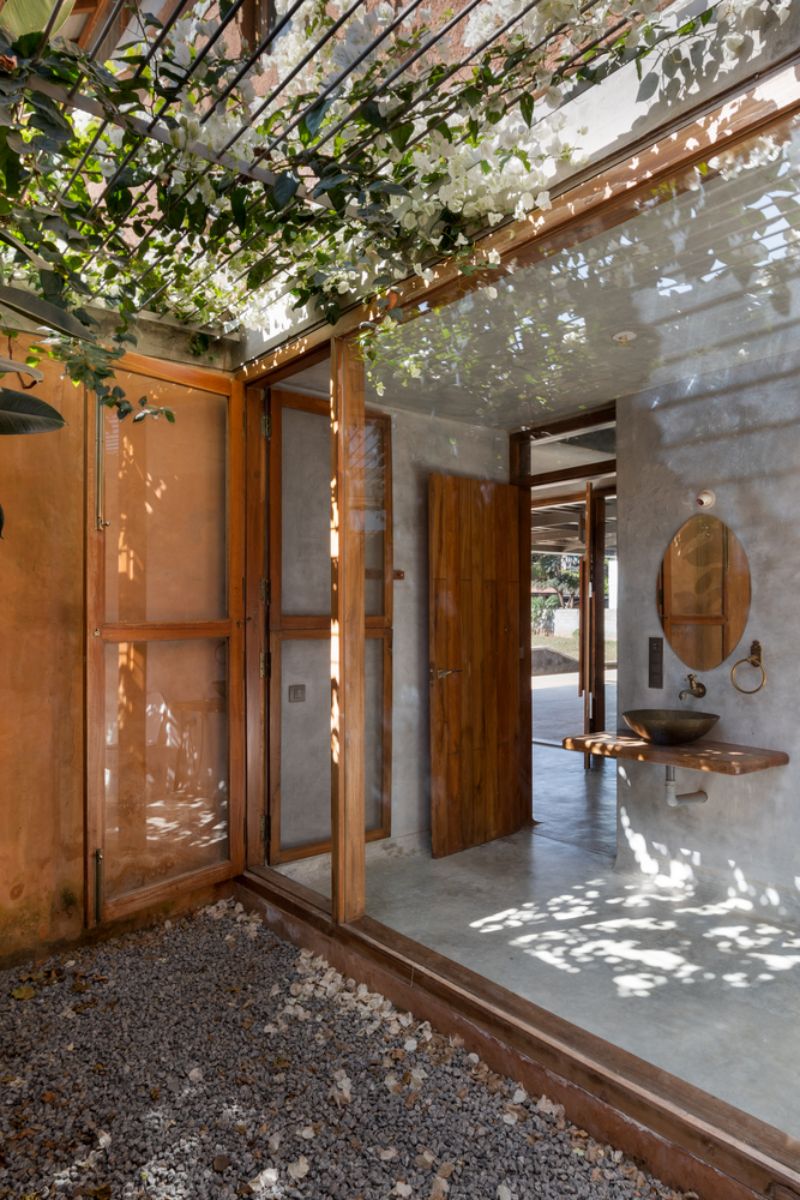 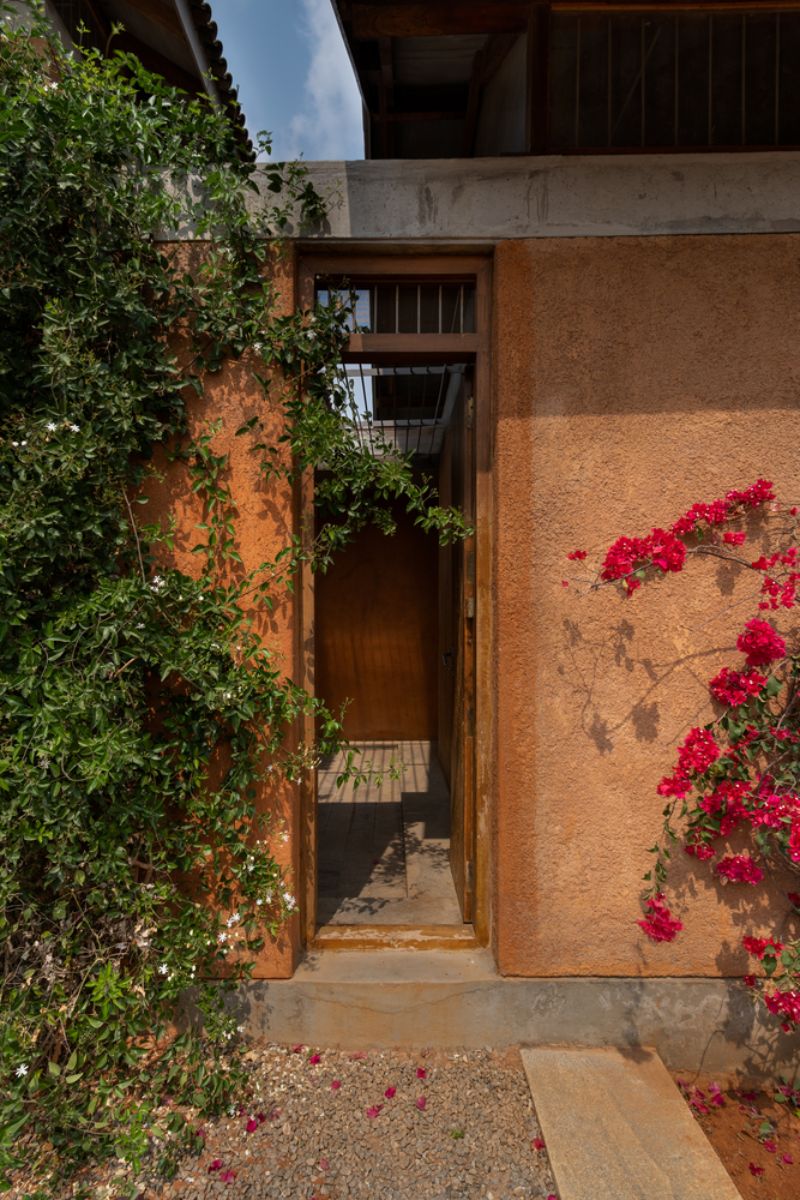 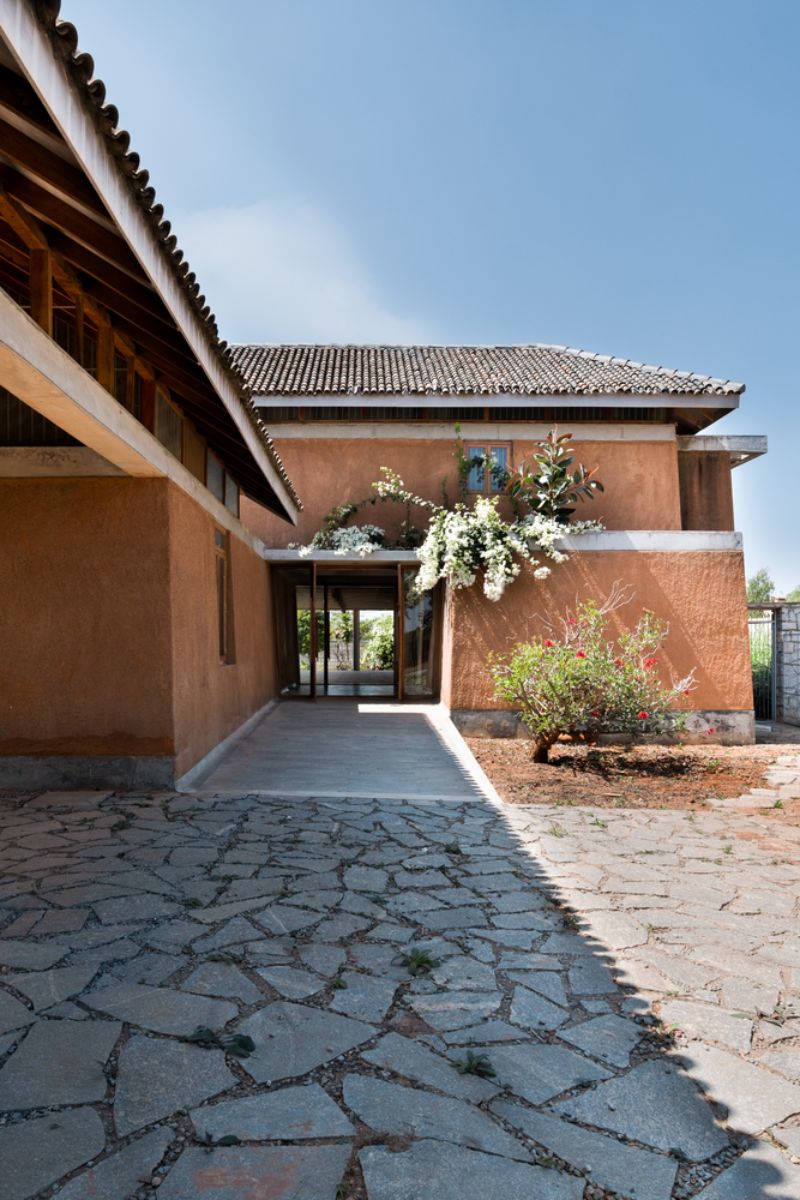 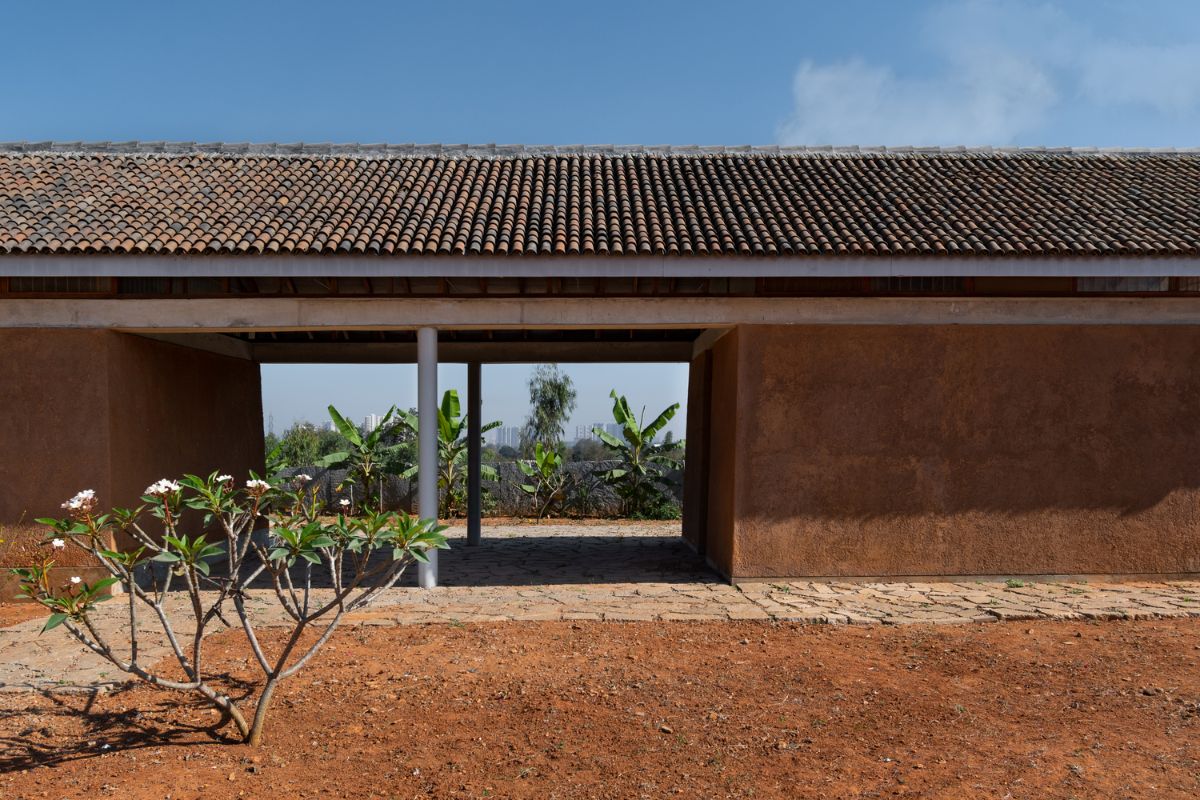 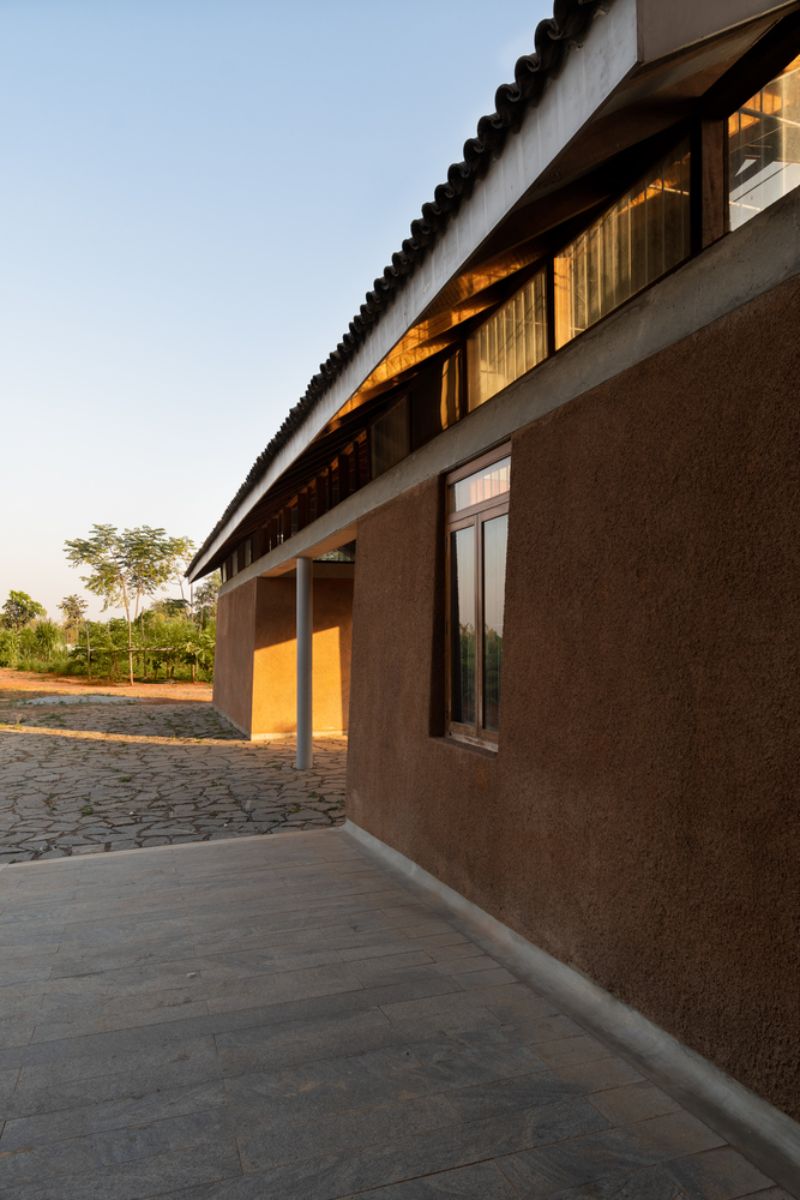 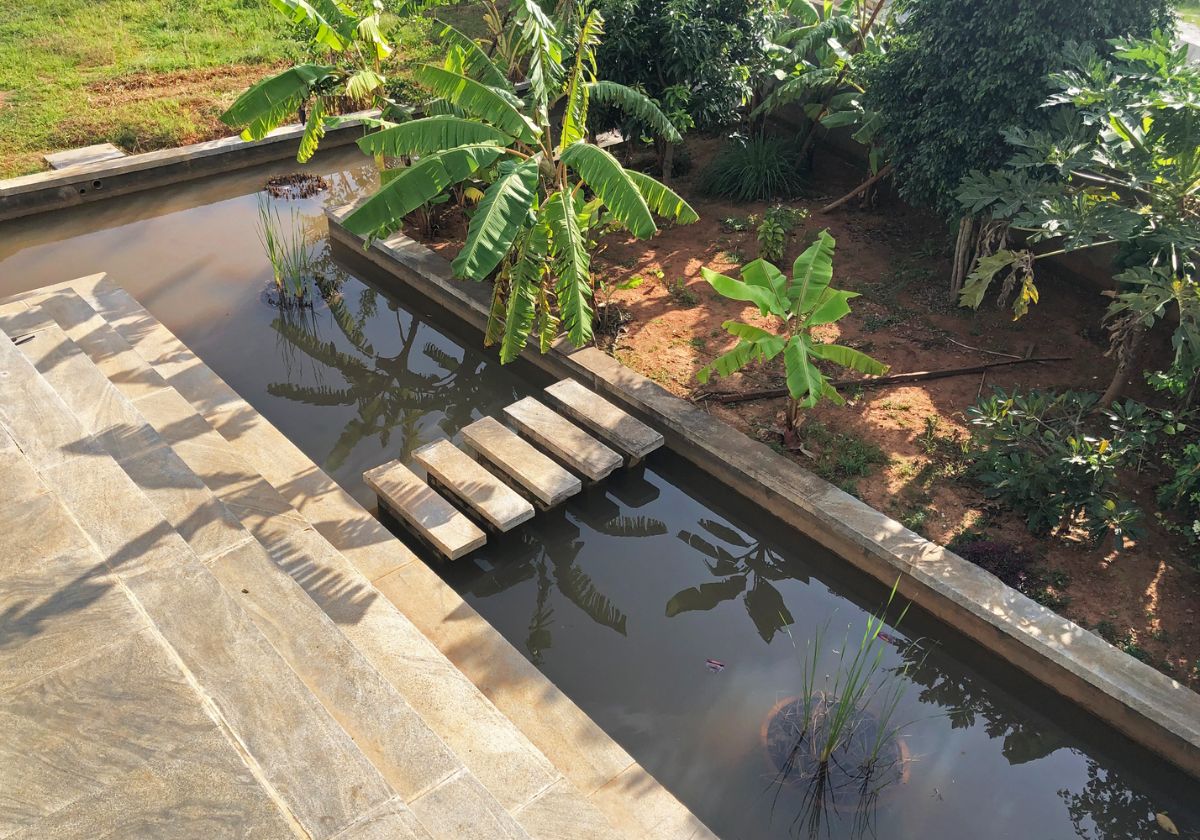 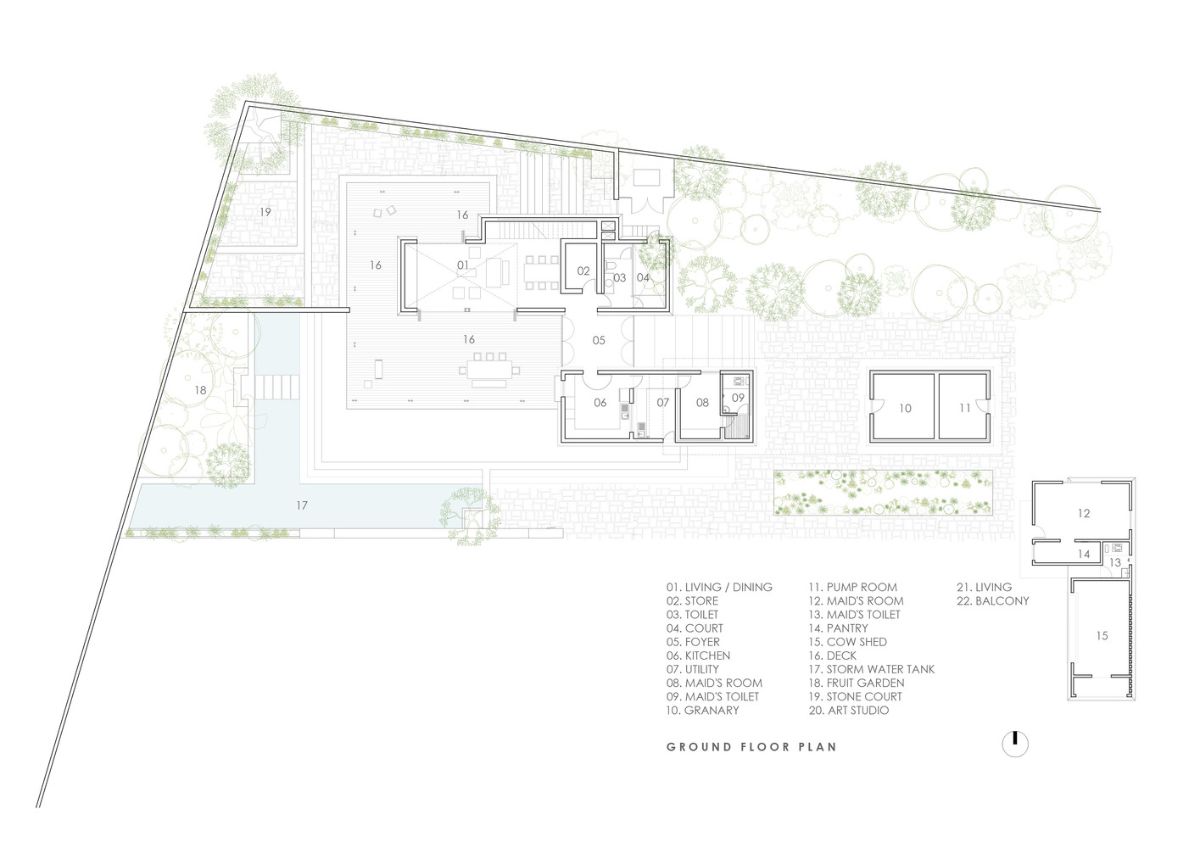 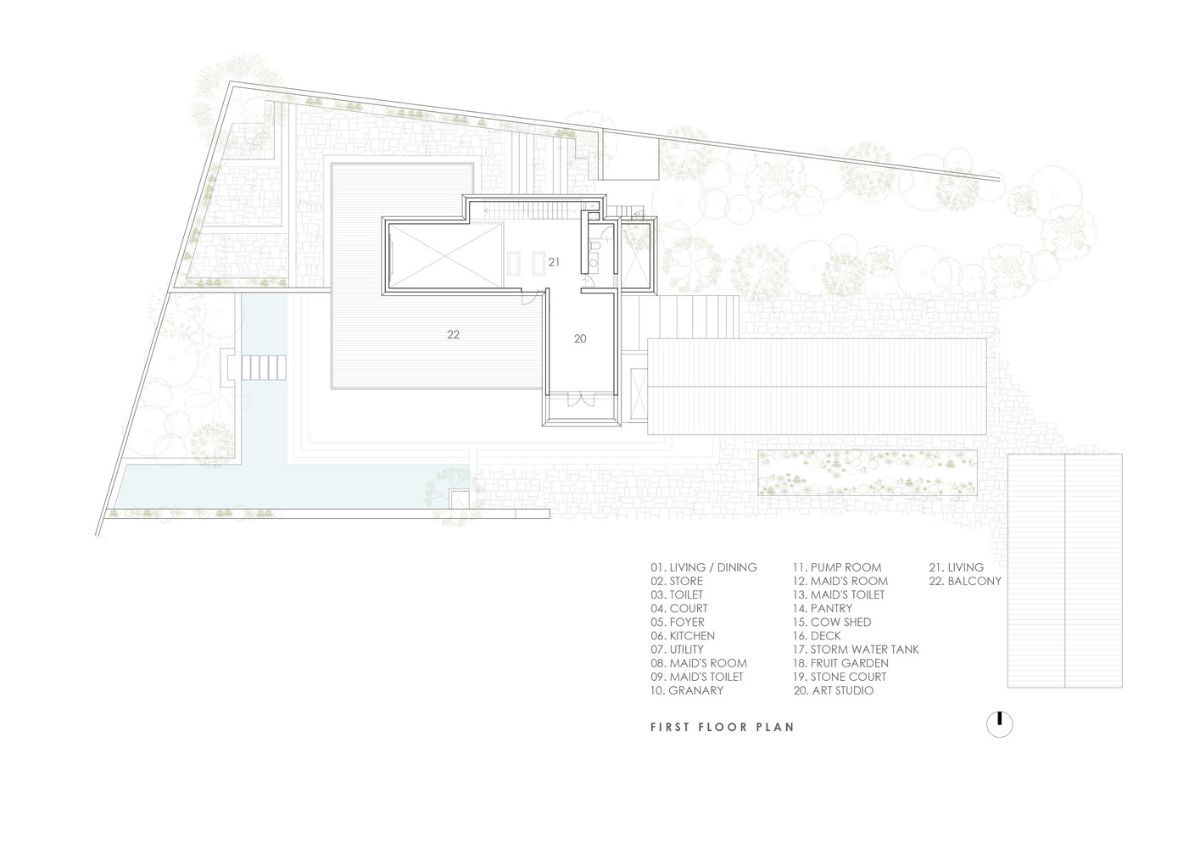 The client’s brief was an unusual one. While on the one hand, they wanted to host parties and extended family gatherings, they also had it in mind to use it as a weekend getaway for just the four of them, to experience the outdoors, to farm, and connect with each other.

As such, there were to be no bedrooms at all, just a few living spaces, opening out to each other and spilling out to the outdoors. There is just one space on the first floor, with sliding folding doors, which could potentially provide some privacy when required.

So, our approach was to create a relatively small house but with large semi-covered areas which could house the larger gatherings. As the discussion about the building grew, the idea of the farm was elaborated, so we included a space for storage of the farm produce and also a cowshed, which is to house 2 cows along with a caretaker’s lodging.

The idea here was to use simple, traditional techniques for construction with all the inherent benefits of passive systems to ensure comfortable living.

The basic premise for the farmhouse was that while we are providing shelter, we are nonetheless made aware of the natural surroundings, climate, and elements. The house encourages this engagement with the outdoors with an elaborated threshold between the inside and outside- a large verandah that wraps around the main living area.

The building has been positioned towards the northern, and lower, end of a gently sloping site. An open tank, which receives the stormwater runoff from the entire 2-acre site, is placed between the farm and the house, which is to be used for the ongoing extensive vegetation and landscaping.

The natural slopes and drainage patterns of the site have been retained and any excess rainwater is directed from the open tank into the nearby bore well. The plan takes the form of two rectangular volumes, housing the main living areas and the service wing, which are staggered with respect to each other creating a sequence of verandahs, entrances, and courts.

The walls, built out of the excavated earth, have an inclined profile and are finished in natural mud plaster. The roof consists of wooden trusses, made using red cedar, and handmade country tiles with cement sheets for the ceiling. Grey oxide for the flooring and a solid wood staircase and a brass railing complete the palette of natural materials.