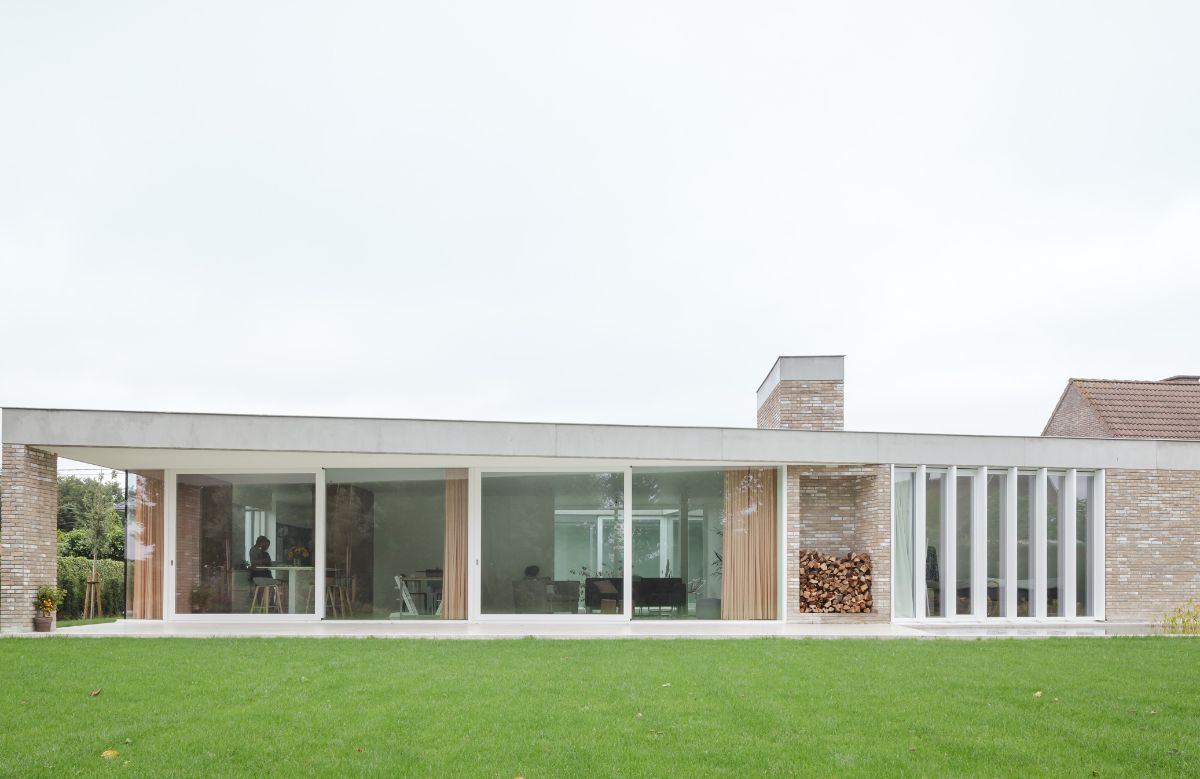 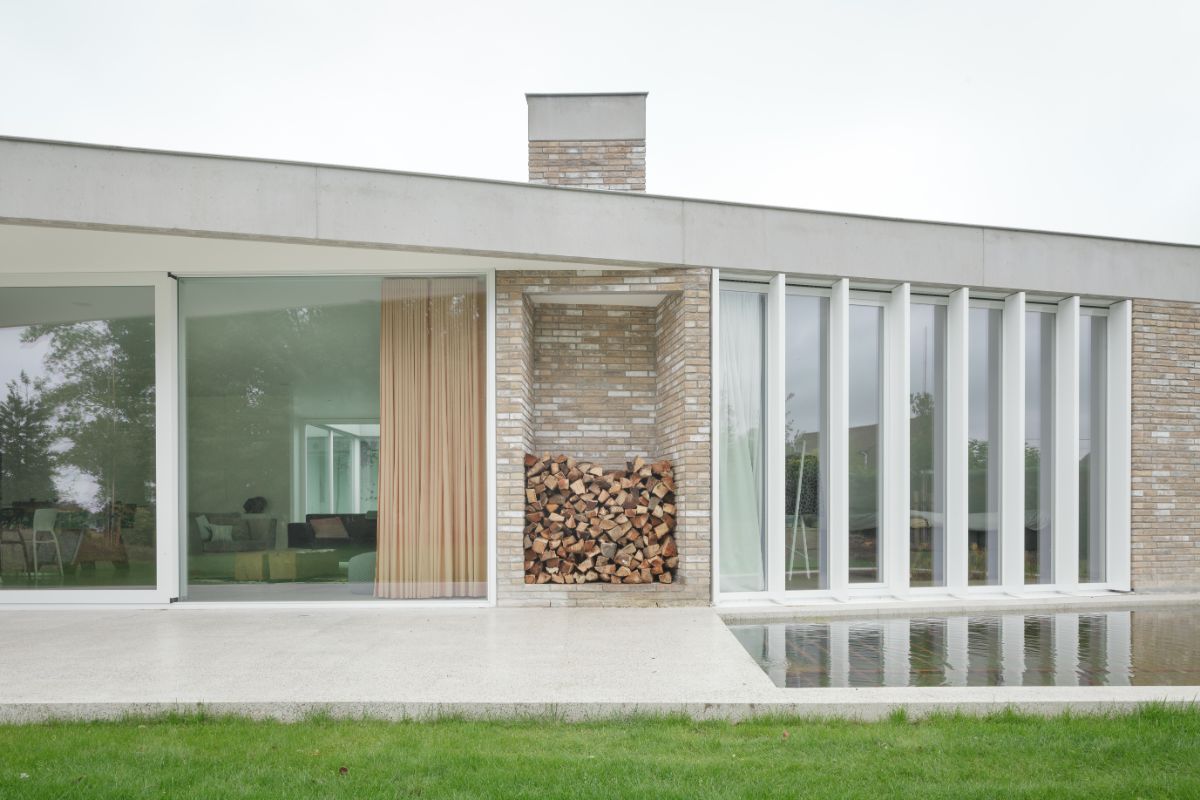 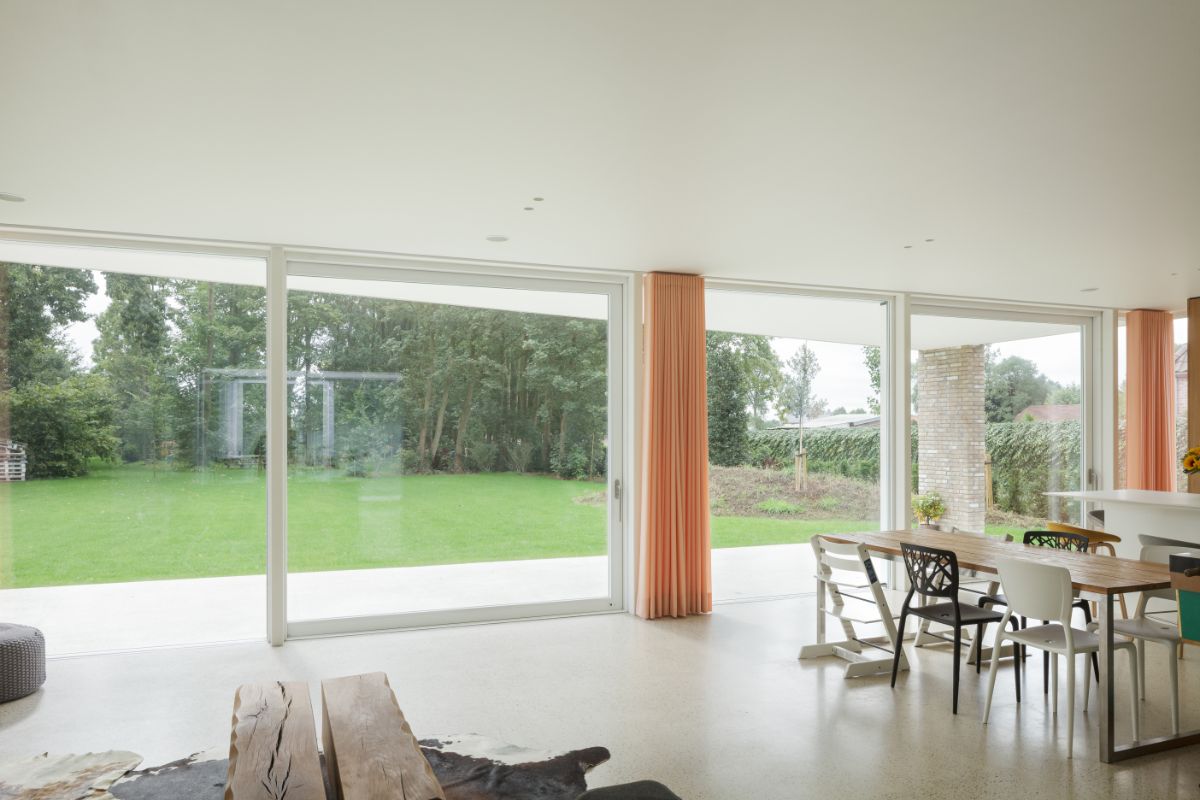 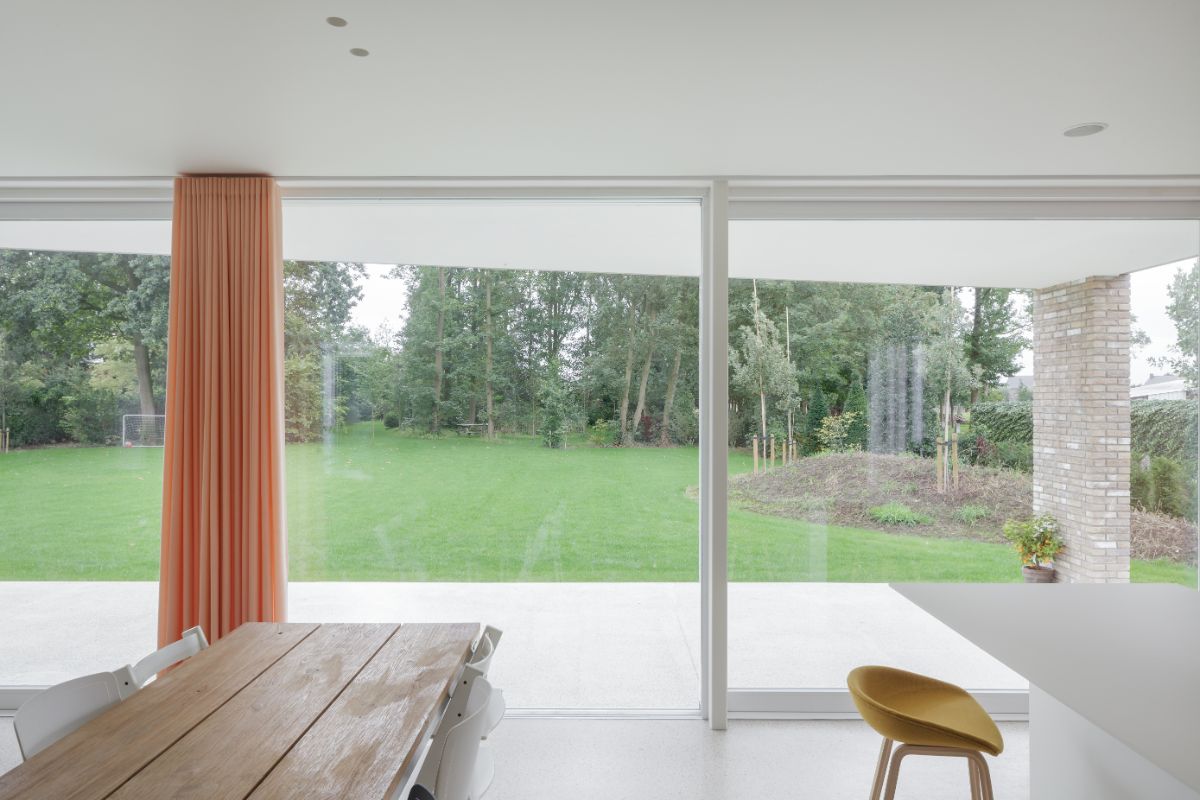 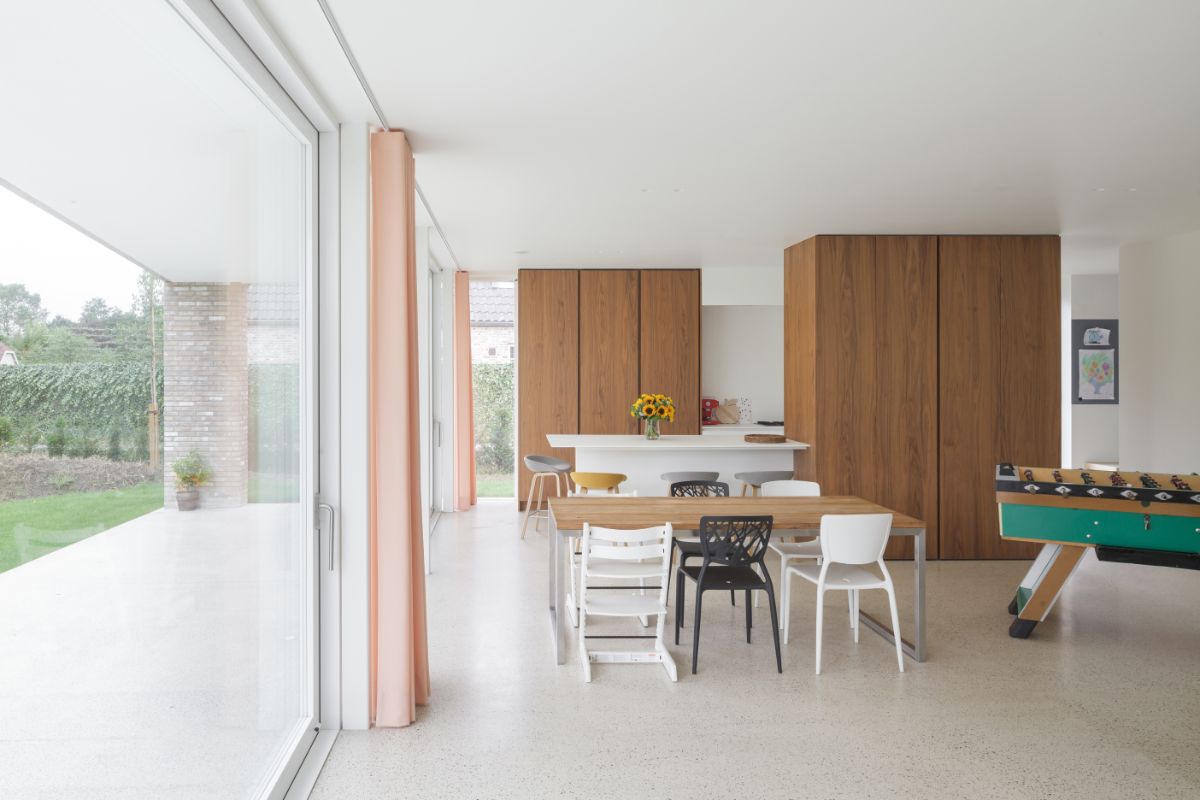 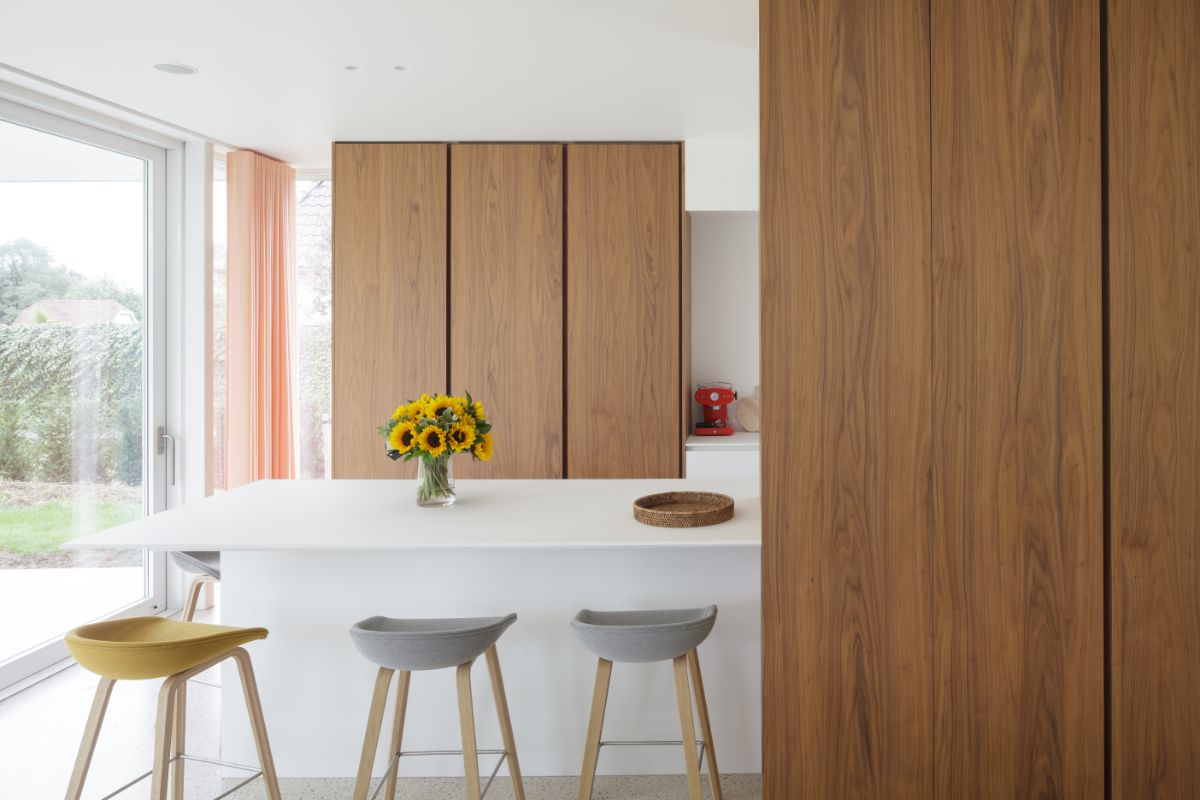 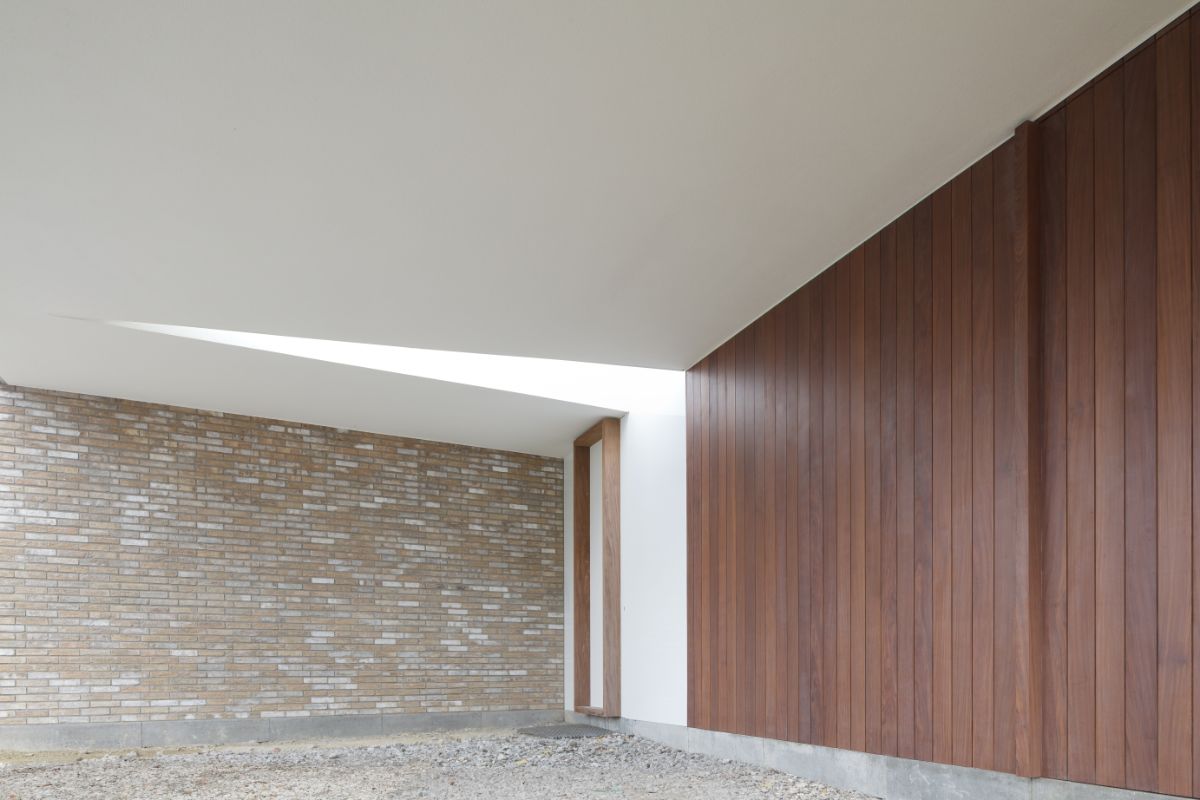 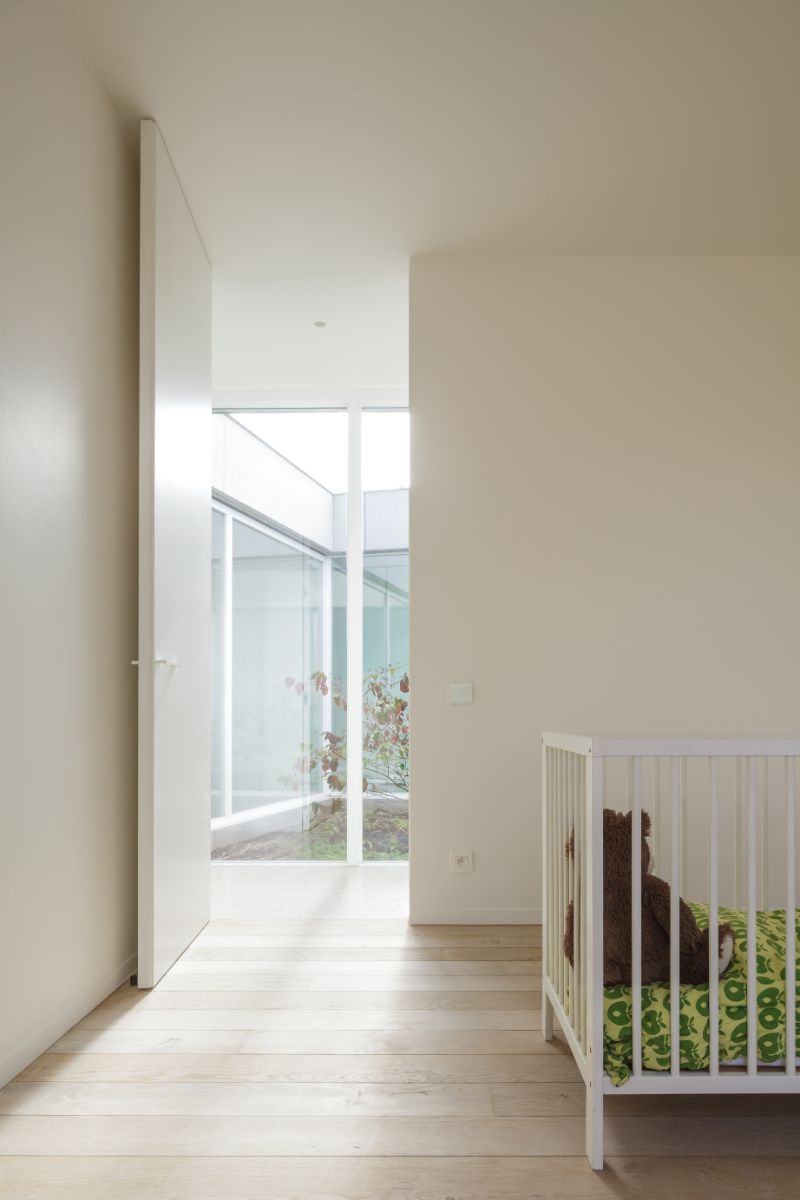 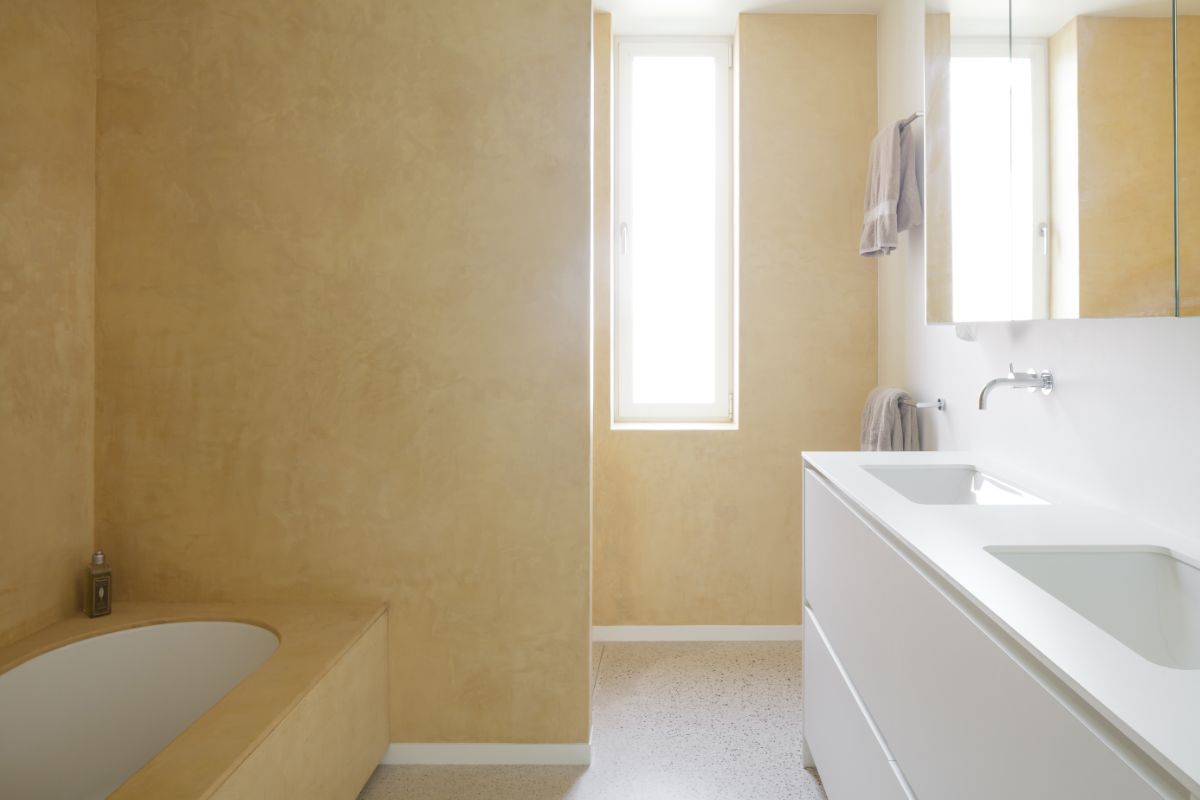 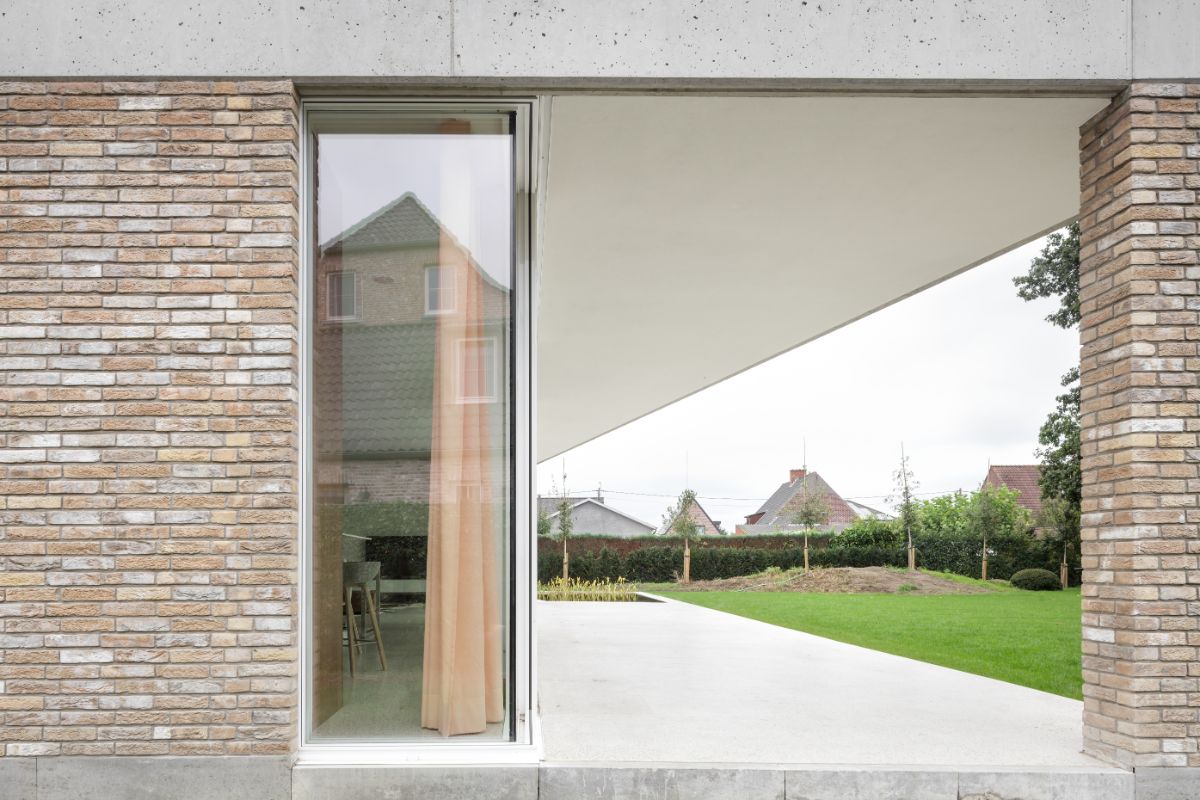 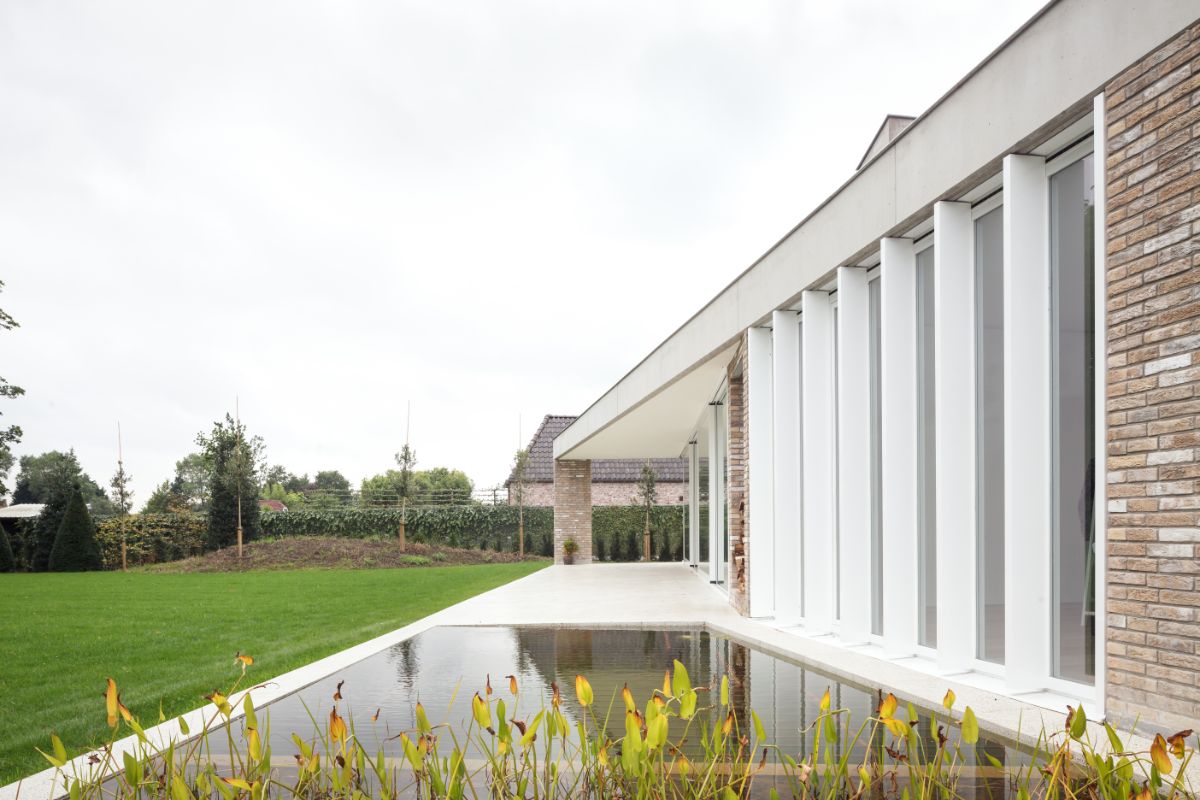 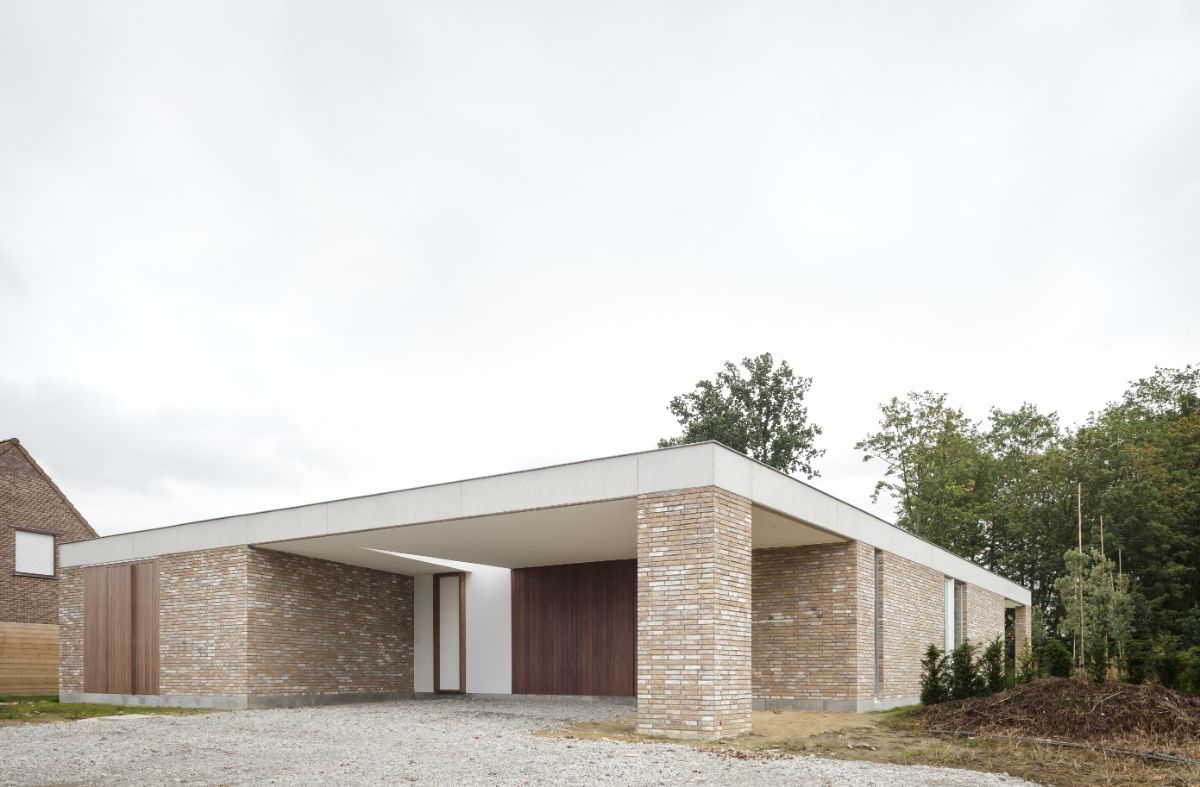 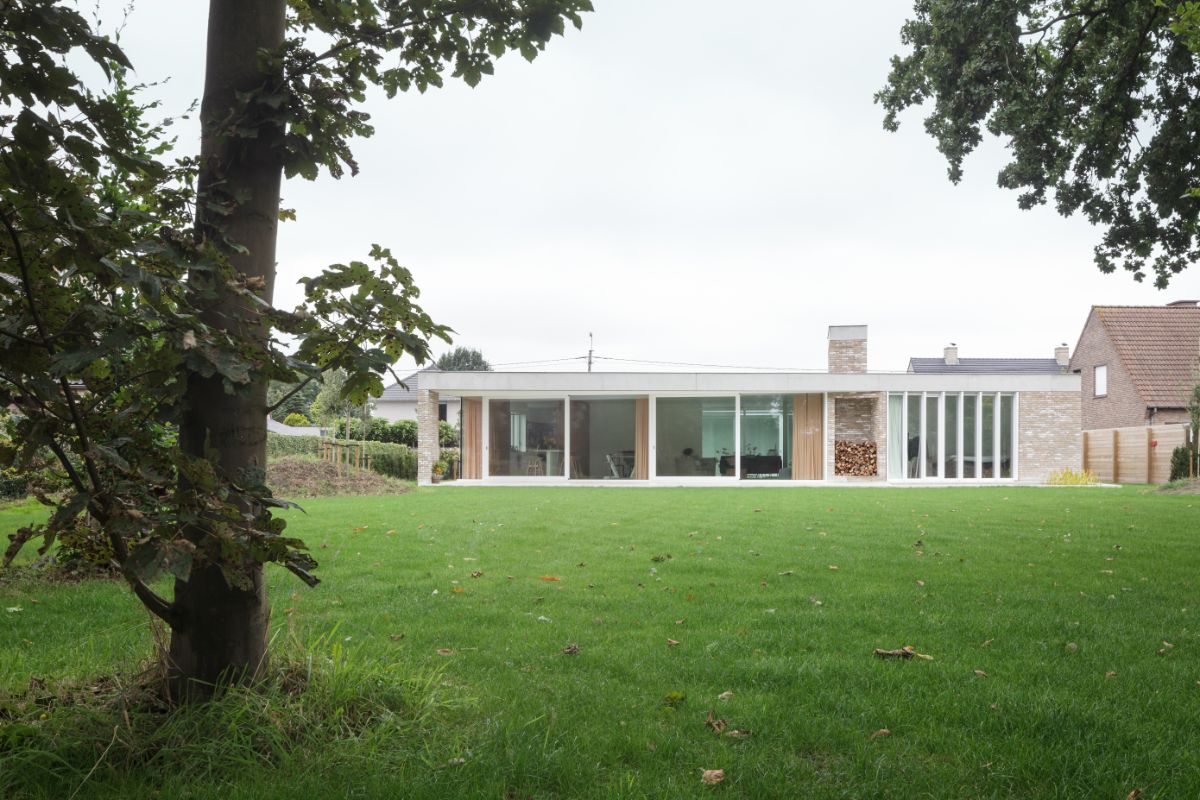 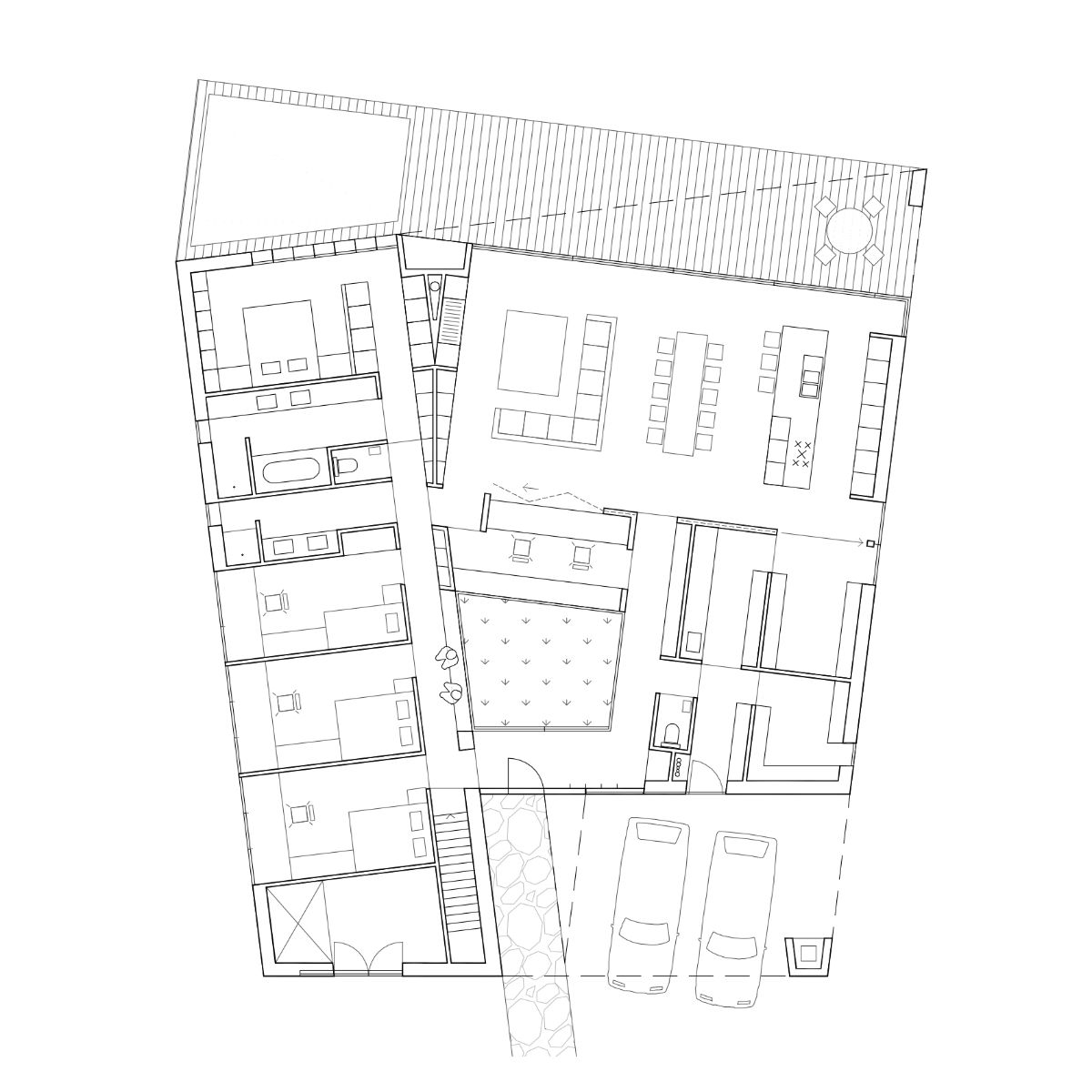 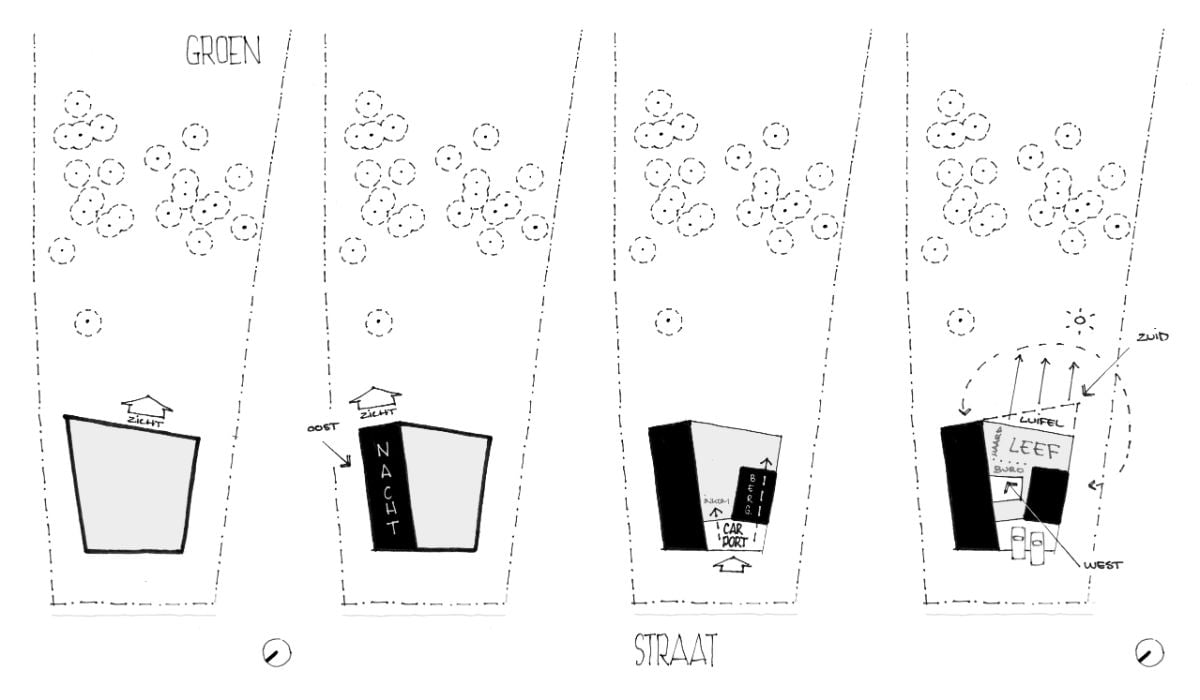 This single-family house is located in Nazareth, a municipality in the Belgian province of East Flanders. It is situated in a street with a variety of housing typologies nearby a big natural pond. The site has a great depth running from the permitted building zone up to an area of trees and dense vegetation in the back.

The main idea behind this project was to give the owners an optimal view on those trees and taking advantage of the orientation to fill the house with natural light according the needs of the different spaces.

The choice was made not to compete with the other typologies and architectural styles of the neighbouring buildings, but to create a discrete one story house referring to a former demolished construction built on the plot.

The floorplan of the bungalow follows the lateral plot boundaries and thereby gradually opens towards the back. This way the view to the garden and trees is maximized.

First a patio at the heart of the house brings light to the more closed parts. It visually connects the entrance, home office space and night hall. They are developed around the patio responding to their need of intimacy.

Due to its irregular form the sun reflects in different directions illuminating the adjacent rooms. As a bonus; the circular pathway around the patio invites children to endless games of tag.

Secondly a triangular volume between the living area and master bedroom doubles as fireplace on one side, and a dressing cupboard on the other side. The shape translates to the form of the chimney above it.

At last another triangular form is one made of air: a skylight opening in the carport marks the front door At the entrance visitors already see a glance of the tree tops through it.

The back facade folds out towards the garden with a concrete awning, terrace and a pond. These elements make, as a part of the architecture, the transition between inside and outside. The different lines of the plan create the awning so that it casts the most shade when the sun is at its highest.

At the crossing point the façade bends, turning the windows of living area and master bedroom away from each other. This way they can both benefit the same view without compromising their mutual privacy. The pond and aluminium blinds of the master bedroom window enhance this.

Despite of its size, the house makes a modest appearance from the street view. Seen from the back the bungalow evokes the atmosphere of a vacation house from times gone by, with its canopy, chimney and even a place to stack the woodblocks for the fireplace.