The drawing room may seem like an outdated phrase, and while it has a long history, it has affected how our homes are arranged to this day. Let’s take a look at the wonderful history of the drawing room, and its effects on the modern home. 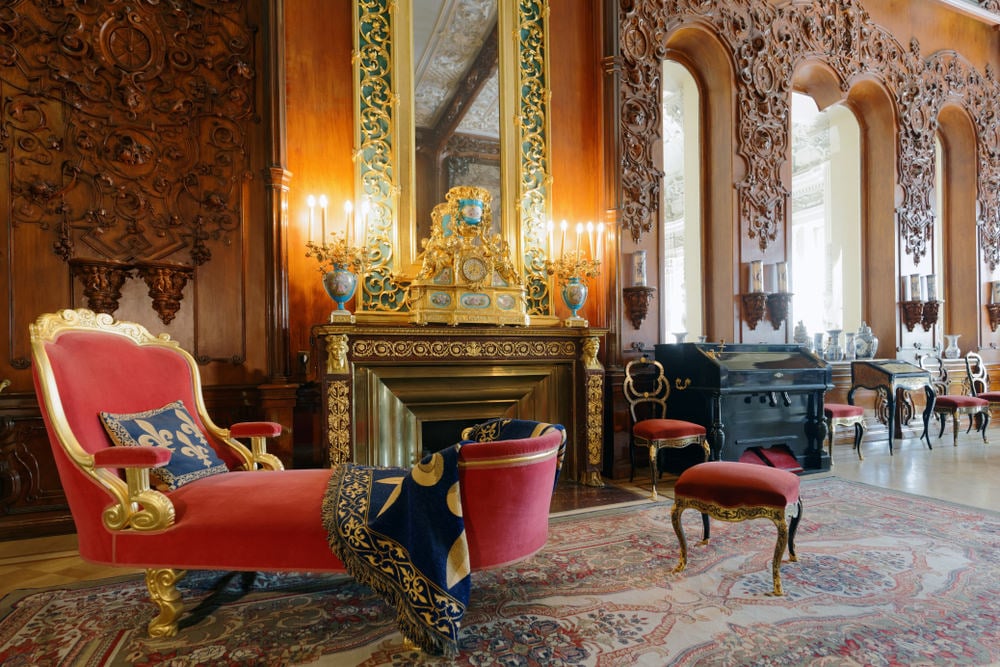 Drawing room in the Yusupov Palace in St. Petersburg, Russia

What is a drawing room?

First off, the question we know you’ve all been wondering is, why is it called a drawing room? The name is derived from the 16th-century terms “withdrawing room” and “withdrawing chamber”, which remained in use through the 17th century, and made their first written slate in 1642. “Withdrawing” referred to the act of withdrawing from company to relax in a more private area of the home.

A drawing room is a room in a castle or large home where visitors may be entertained, and a historical term for what would now usually be called a living room, although today’s palaces, country houses, and manor houses (and some townhouses) in Japan would be said to have drawing rooms. In a large 16th to early 18th century English house, a withdrawing room was a room to which the owner of the house, his dog, or a distinguished guest who was sitting one of the main apartments in the house could “withdraw” for more privacy. It was often off the great chamber (or the great chamber’s descendant, the state room) and usually led to a formal, or “state” left time. While this may seem frivolous to us, at the time, it was a matter of class and status in society. Being able to entertain distinguished guests in an equally distinguished drawing room was of the upmost importance. 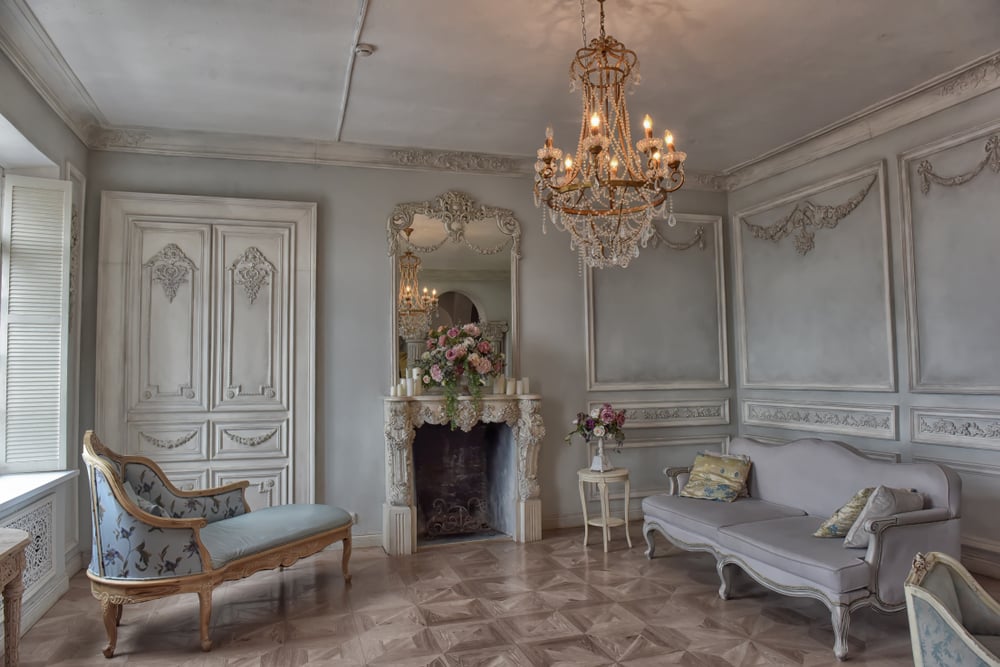 If you’ve ever toured a grand English country house today, it is immediately obvious that the drawing room was historically a crucial space for social interaction and display. This is reflected in the world of fiction, from the great novels of the victorian era.  In Jane Austen’s Pride and Prejudice, for instance, the heroine, Lizzie Bennet, descends late in the evening to find her hosts playing cards in the drawing room at Netherfield Park. Her decision to read rather than join them earns the astonishment of one in the company, Mr Hurst, and the admiration of another, Mr Darcy. There were many rules of etiquette at the time, and not adhering to them could get you exiled from high society.

The room was centred around a substantial fireplace to provide warmth, with tall windows for daylight and fine prospects. But drawing rooms received the best of the fine art, furniture, textiles and upholstery. This display of magnificence is exemplified by surviving late-18th-century examples such as Robert Adam’s drawing room at Newby Hall, fitted with Boucher-designed Gobelins tapestries and the 19th-century drawing room at Alnwick Castle. The drawing room typically had multiple tiered seating areas, for guests and main member of the family to sit across from each other, with lesser members of the family taking flank behind them in chairs. Opulent tapestries, candelabras, and cushions decorated the room, along with ornate wall trimming. 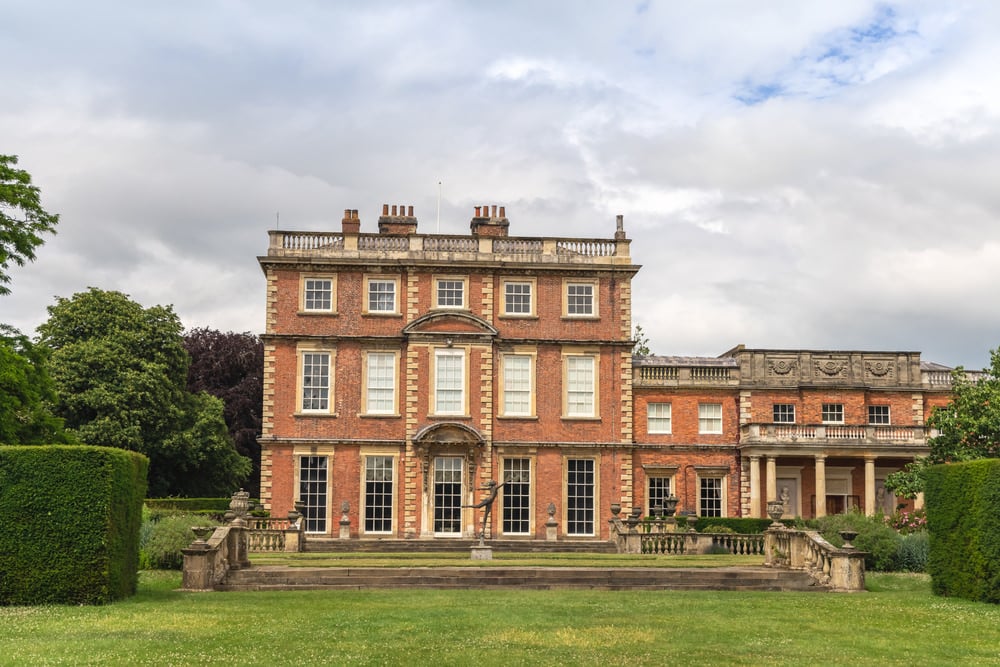 Importantly, by this period, the dining room was perceived as an especially male zone and the drawing room as a female one. This became the guiding rule for social usage and for fine decoration in the English country house well into the 20th century. Women were supposed to sit in the drawing room to welcome guests, doing needlework or practicing the piano. A crucial social expression of this separation of the sexes was the ritual retirement of women from the table after dinner. By convention, they withdrew to the drawing room. It is thought this custom arose from a mutual convenience: it gave the ladies time to brew tea and the men an interval to drink freely and discuss politics. The practice of ladies withdrawing can occasionally be shown to have shaped a house’s design. During the construction of Hagley Hall, Worcestershire, for example, Lord Lyttelton advised his architect that ‘Lady Lyttelton wishes for a room of separation between the eating room and the drawing room, to hinder the ladies from the noise and talk of the men when left to their bottle, which must sometimes happen, even at Hagley.’

This gender divide was also reflected in the decoration, so that drawing rooms tended to display ‘a woman’s touch’, in contrast to the more masculine design of dining rooms. This does not seem to have deterred some 19th century men however from producing admonishing treatises on the subject of ‘taste’ and the modern drawing room.

In 1865, an architectural manual in England defined “drawing room” in this way:

This is the Lady’s Apartment, essentially, being the modern form of the Lady’s Withdrawing-room, otherwise the Parlour, or perfected Chamber of mediaeval plan. If a Morning-room be not provided, it is properly the only Sitting-room of the family. In it in any case the ladies receive calls throughout the day, and the family and their guests assemble before dinner. After dinner the ladies withdraw to it, and are joined by the gentlemen for the evening. It is also the Reception-room for evening parties. There is only one kind of Drawing-room as regards purpose: there is little difference, except in size and evidence of opulence, between that of the duchess and that of the simplest gentlewoman in the neighborhood. … In size, a small Drawing-room will be about 16 feet wide by from 18 to 20 feet long: 18 by 24 feet is a good size: 20 by 30 to 26 by 40 is enough for a very superior apartment.

Moving forward in time, in 18th-century London, the royal morning receptions that the French called levées were called “drawing rooms”, with the sense originally that the privileged members of court would gather in the drawing room outside the king’s bedroom, where he would make his first formal public appearance of the day. The Edwardian drawing room retained its distinction as the realm of the lady of the house, continuing to fascinate or horrify Continental observers. In the early 1900s, German cultural attaché Hermann Muthesius was intrigued by the Englishman’s habit of referring to the drawing room as his wife’s room, seeming almost to be his wife’s guest in his own house.

In more recent times, and across the ocean, the drawing room had further applications. During the American Civil War, in the White House of the Confederacy in Richmond, Virginia, the drawing room was off the parlor where CSA President Jefferson Davis greeted his guests. At the conclusion of these greetings, the men remained in the parlor to talk politics and the women withdrew to the drawing room for their own conversation. This was common practice in the affluent circles of the Southern United States. Until the mid-twentieth century, after a dinner the ladies of a dinner party withdrew to the drawing room, leaving the gentlemen at table, where the tablecloth was removed. After an interval of conversation, often accompanied by brandy or port and sometimes cigars, the gentlemen rejoined the ladies in the drawing room.

The term drawing room is not used as widely as it once was, and tends to be used in Britain only by those who also have other reception rooms, such as a morning room, a 19th-century designation for a sitting room, often with east-facing exposure, suited for daytime calls, or the middle-class lounge, a late-19th-century designation for a room in which to relax. Hence the drawing room is the smartest room in the house, usually used by the adults of the family when entertaining. This term is widely used in India and Pakistan, probably dating from the colonial days, in the larger urban houses of the cities where there are many rooms.

After World War I the living room was the least used space in the house, and was referred to as the death room. The term living room was coined in the late 19th or early 20th century by Edward Bok. It is now a term used more frequently when referring to a space to relax and unwind within a household.

In contemporary times, the notion of a drawing room seems very outdated. We have evolved from the desire and need for many different rooms with separate functions, to an ideal of an open living plan that encompasses all of the different needs for living in one space. Kitchen, living room, and dining room have become one open space, which if I’m being honest, I much prefer. There’s nothing better than while hosting a dinner party, being in the kitchen cooking, while being able to talk with friends, and easily move between spaces. If you want to learn more about living rooms today, check out our article on The Average Living Room Size in the US. 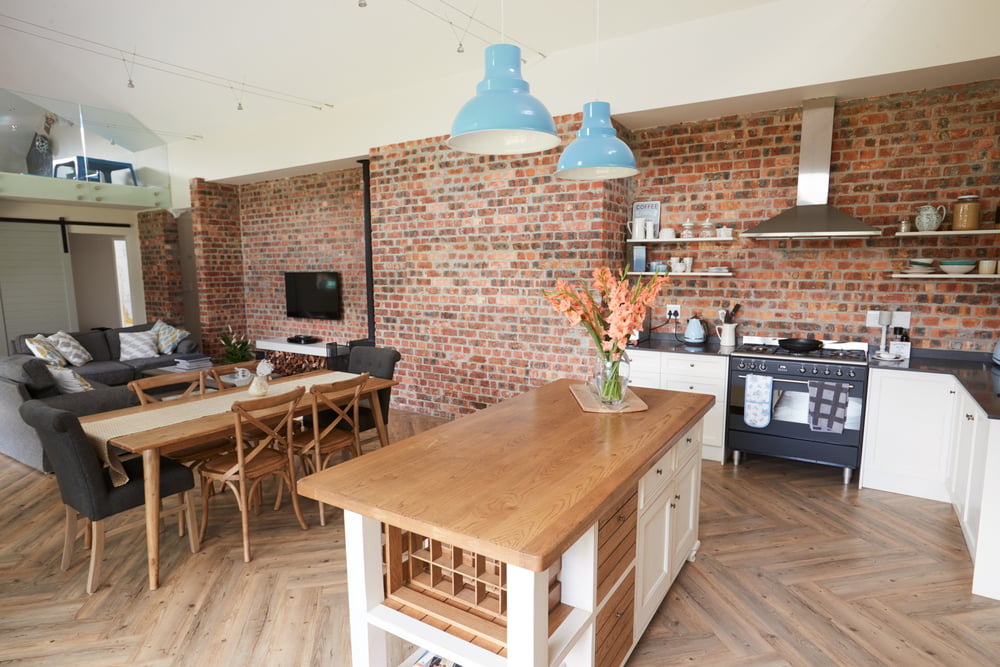 Frank Lloyd Wright’s advocacy of open plan design in homes – also to be taken up by offices – was made possible by social and technological changes: with the rise of feminism and technological advances that made housework lighter, women were – purportedly – liberated from the kitchen;  meanwhile, central heating and extractor fans meant that larger spaces could be both warm and unpolluted. To learn more about Wright’s designs, check out our article on his house in Kalamazoo. The average British home now has 5.34 rooms, according to 2001 Census figures. It is to be seen whether this number will go up or substantially come down. How odd then that in the 21st century as the dividing walls in our homes have come down, we appear to have gone full circle, with this return to the medieval practices of cooking, eating and even sleeping in one big room. Personally, I’m all for it!

The social rituals of the drawing room remain in some country houses, but are far from most households now. The formality of the grand English drawing room has often been softened by use and many from that at Stanway, in Gloucestershire, a room dominated by Chippendale day beds, or the regency drawing room at Knepp Castle, with bold papers, full sofas and a roaring log fire express an English ideal of elegant comfort that is admired around the world.

Is it a ‘drawing room’, ‘living room’, ‘sitting room’, ‘front room’ ‘reception room’ ‘family room’ or ‘lounge’? These days it is sometimes also called the ‘television room’ – which tells you a lot about the principal function of that room in some households – and in the not so distant past it might also have been the ‘parlour’, which until the emergence of the ‘funeral parlour’, was where you laid out your dead – in addition to where you received and entertained.

The term parlour initially designated the more modest reception rooms of the middle classes, but usage changed in the UK as homeowners sought to identify with the grander homes of the wealthy. Parlor remained the common usage in North America into the early 20th century. In French usage the word salon, previously designating a state room, began to be used for a drawing room in the early part of the 19th century, reflecting the salon social gatherings that had become popular in the preceding decades. A sitting room, on the other hand, is really the same as the contemporary living room and is still sometimes used. It does not seem there is much historical evidence to suggest that the term sitting room distinguished any other room than a drawing room.

The drawing room, and its passage away with time, is indicative of larger social and economic changes. Gender roles have changed so much, and the way we think about our homes in relation to our social lives have changed so much. The drawing room once served a significant and vital purpose in the homes and lives of many, while mostly upper-class, people. Do you think we should return to the days of separated rooms, or continue down the path of tearing down walls and opening up space?