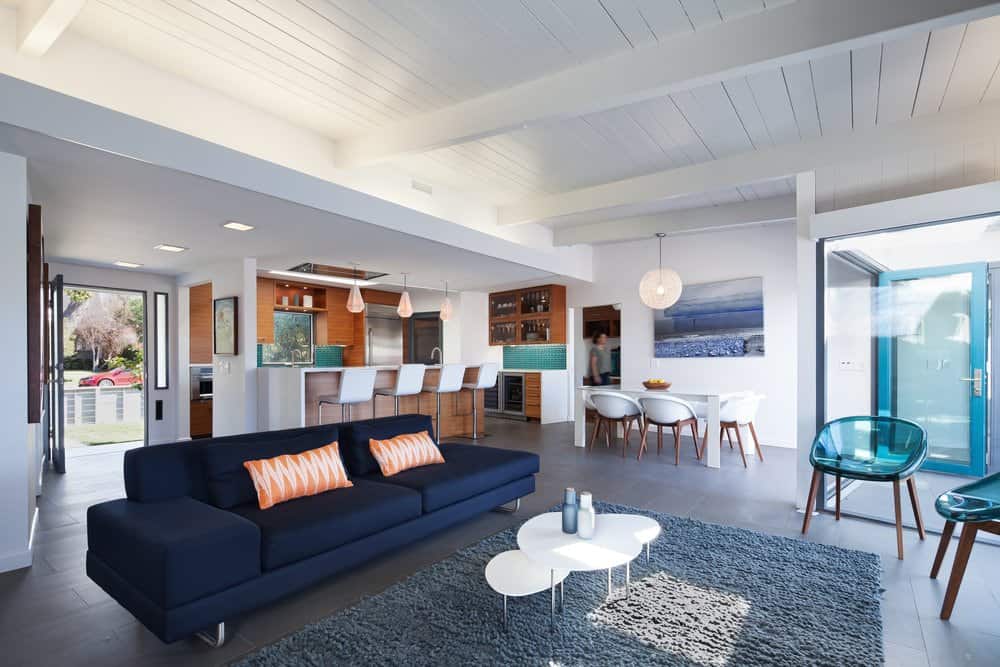 In 2013, homeowners Elaine and David contacted Abeer Sweis wanting to expand square footage to meet the needs of their growing family and to make updates. Sweis designed a new wing that provides two additional bedrooms, two bathrooms, and a den, using leftover space for a laundry room and pantry. Sweis also expanded the dining area and renovated the main living space with the exception of the original brick fireplace.

There were four specific elements driving the design: indoor/outdoor living, utilizing natural light, having an open floor plan with continuity of space and views, and the use of modern materials that fit seamlessly into the midcentury architecture.

Indoor-outdoor flow both to the patio and the den on the other side was created with the use of folding doors and large windows, and by carrying the tile from the interior living space out to the patio and spa area. The hall, typically simply a circulation space, became one of their favorite rooms in the house. It ties together the spaces in the new addition and accentuates the intersection of the angles existing and new.

The clients lived in the home during this phase of construction.

The north wing of the home is undergoing renovation now in construction. An accessory dwelling unit (ADU) will replace the existing one-car garage and guest room. The challenge was to add more square footage without sacrificing the outdoor living space. Although built with contemporary innovations, the green roof design of the accessory structure compliments the original home.

The green roof now under construction is one small way the homeowners hope to increase biodiversity, reduce ambient temperature, and help purify the air. Abeer Sweis, who teaches architecture at UCLA and runs SweisKloss, is using mostly recycled materials for the rebuild.

Abeer, Jeff and their team did an amazing job expanding and renovating our mid-century modern architectural home. The design process was a true partnership-Abeer listened to our needs and incorporated our preferences, while executing an incredible design vision for our home. We enjoyed the process very much. Jeff did an exceptional job leading the construction process. Every detail was addressed and the end product is truly amazing. Every aspect of our new home meets our needs, both in terms of form and function. We highly recommend [them] and would hire them again without reservation.” – David + Elaine 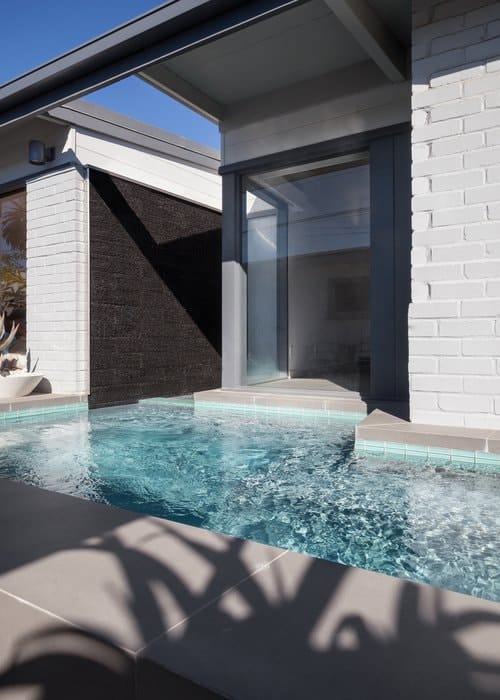 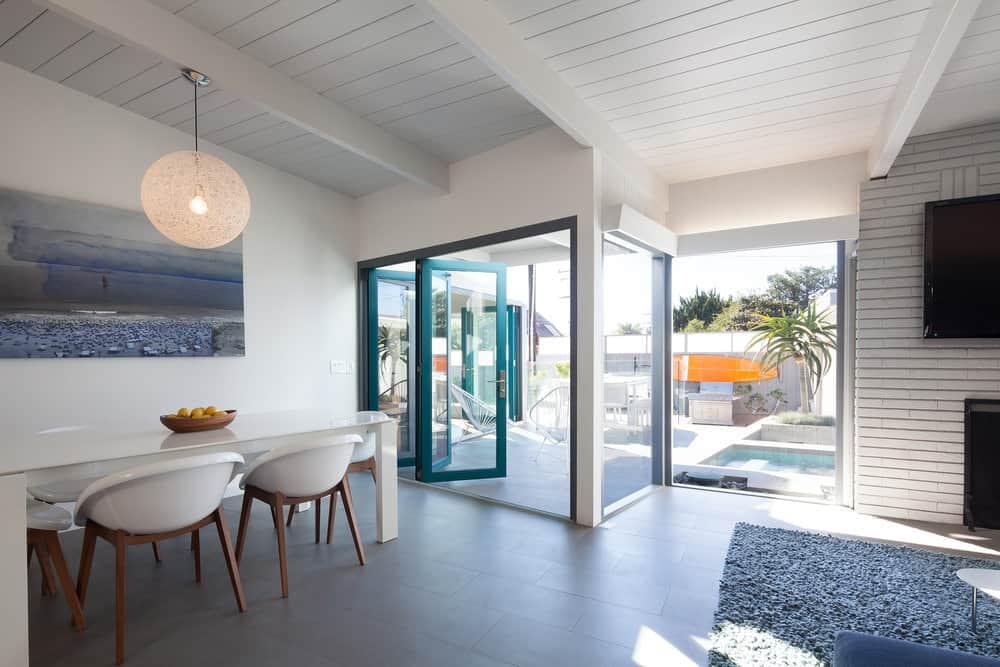 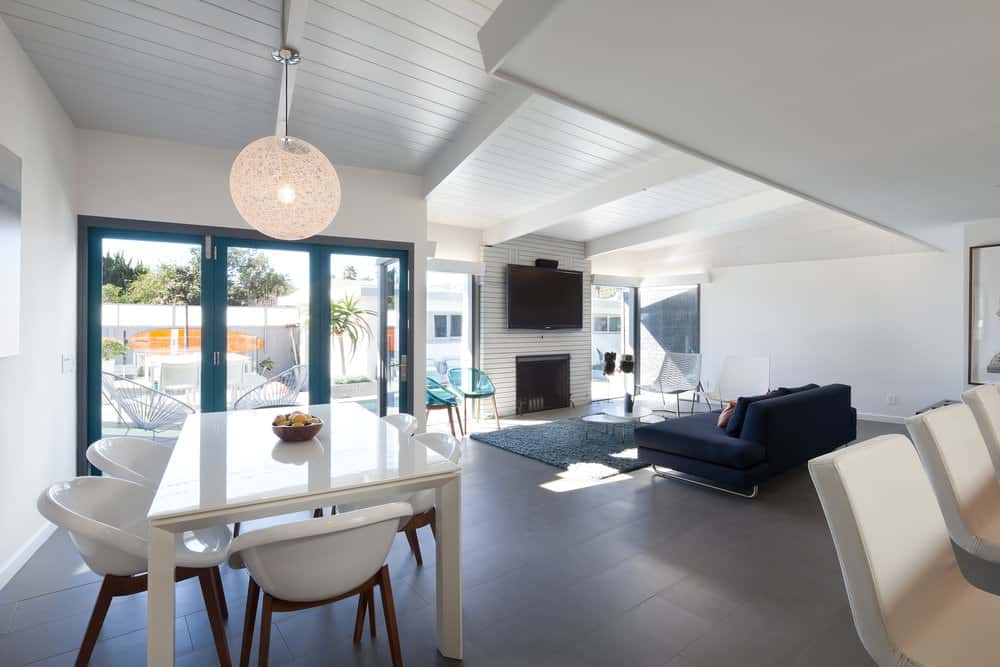 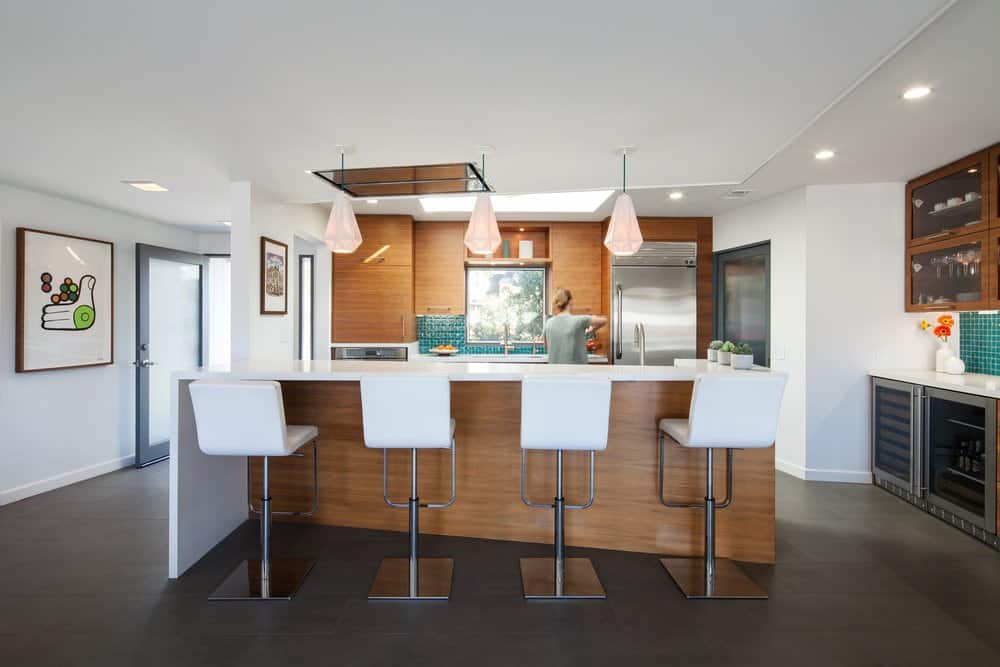 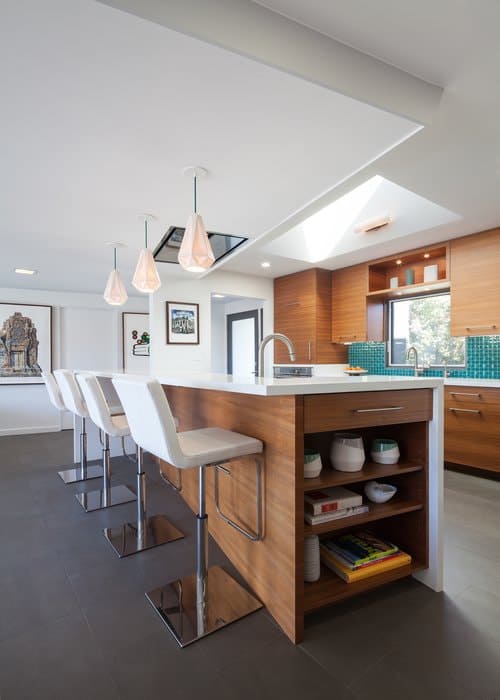 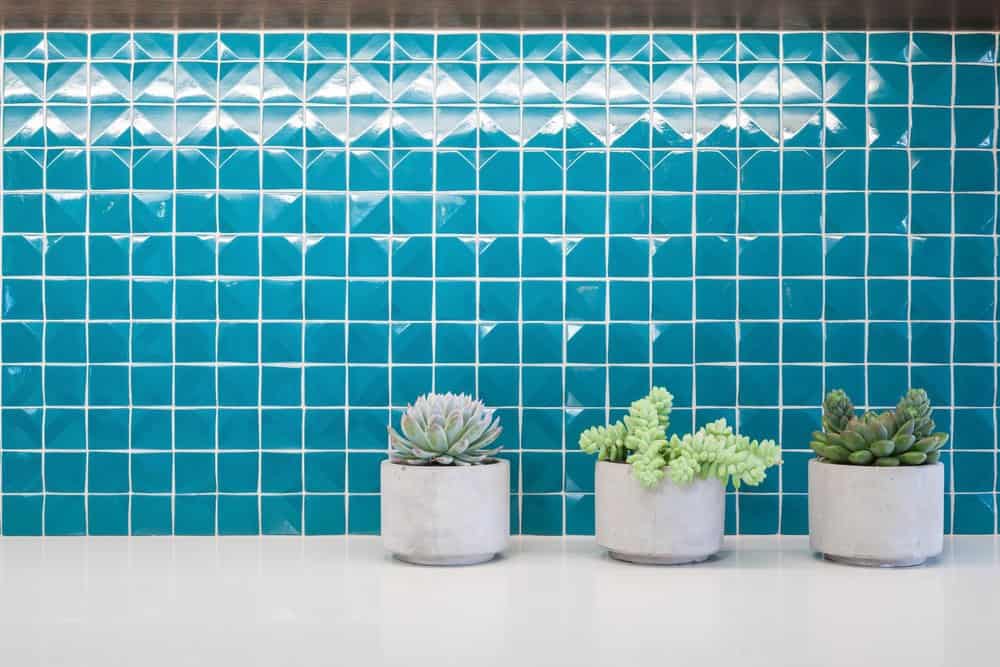 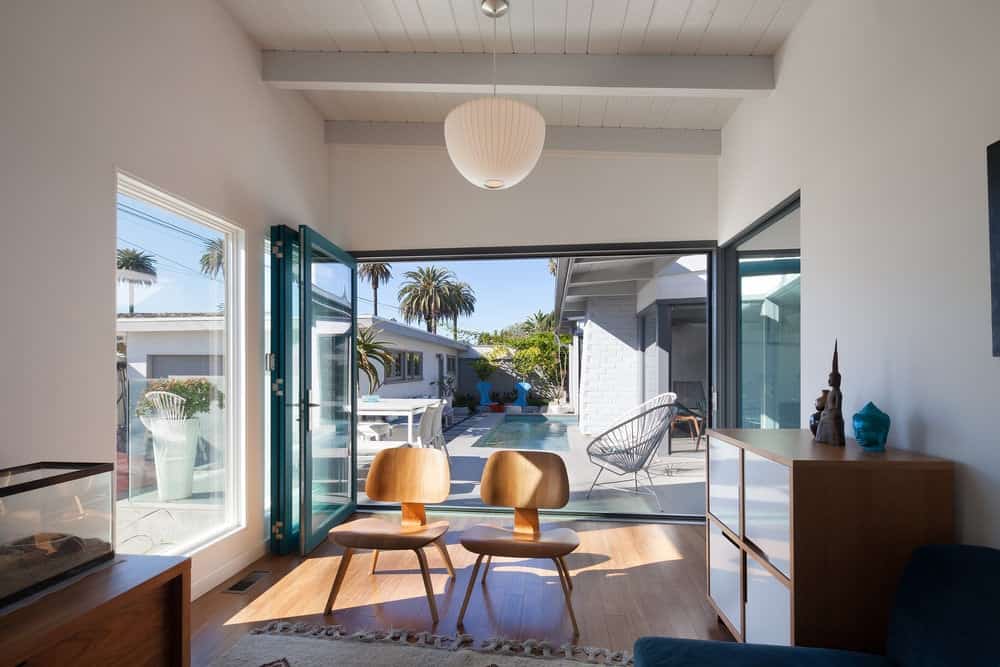 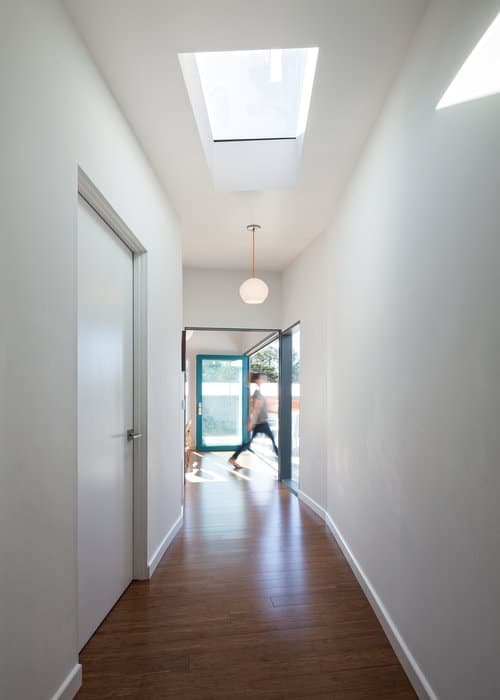 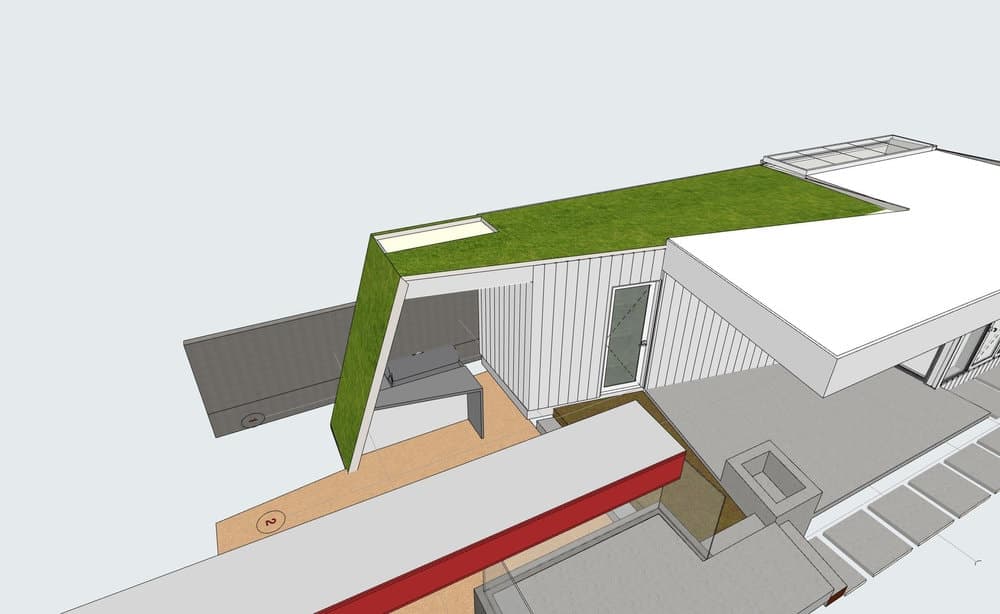 At heart, Abeer is both an architect and an interior designer. While she also has intimate knowledge of construction and structural engineering, it is her innate ability to look at a potential project and see the myriad of design possibilities that have helped make her company a success.

Abeer knew at a young age that she wanted to be an architect. When she was 10, her family moved from her native Amman, Jordan to Los Angeles, where she went on to receive her Bachelor of Architecture degree from Woodbury University. While working as a designer at a small architecture firm, she acquired the technical knowledge and business skills to build her own company. In 1998, she started her own design firm, and in 2006 she partnered with her husband Jeff Kloss to create the construction side of the company, fulfilling their design + construct vision.

Since 1995, Abeer has taught at UCLA Extension, Cal Poly Pomona, Pierce College, Woodbury University and other Los Angeles area design schools. A leader in her community, she is a distinguished past president of the Kiwanis Club of Santa Monica and an involved parent of two rapidly growing children.

A licensed general contractor and go-to guy for all things construction, Jeff has a Bachelor of Architecture degree from Woodbury University where he and Abeer met. While he was pursuing his degree, he worked for a local construction company and discovered his appreciation for building.

Jeff went on to manage the construction of exclusive restaurants, high-end retail projects and custom homes for the Marshall Group before leading institutional projects at CW Driver such as The Cerritos Public Library, Jewish Home for the Aging and the Torrance YMCA. He also oversaw multiple modernization projects for the La Crescenta Valley and El Segundo School Districts.

After learning all aspects of construction on a variety of large-scale jobs, Jeff started to miss collaborating with a team and working on projects that were more intimate and personal for the end-user. Thus, the perfect opportunity presented itself to join forces with Abeer to create their full-service design + construct firm. Jeff is an active parent, coach, and mentor in Boy Scout Troop T2 and AYSO Soccer. From leading a hike or canoe trip to refereeing soccer games, he enjoys spending time with his son and daughter.