Frank Sinatra's Malibu Beachfront home was recently snapped up for a reported $9.55 million. Imagine owning this cherished piece of property built and lived in by the Chairman of the Board himself. The property is said to now be owned by actress Mindy Kaling. 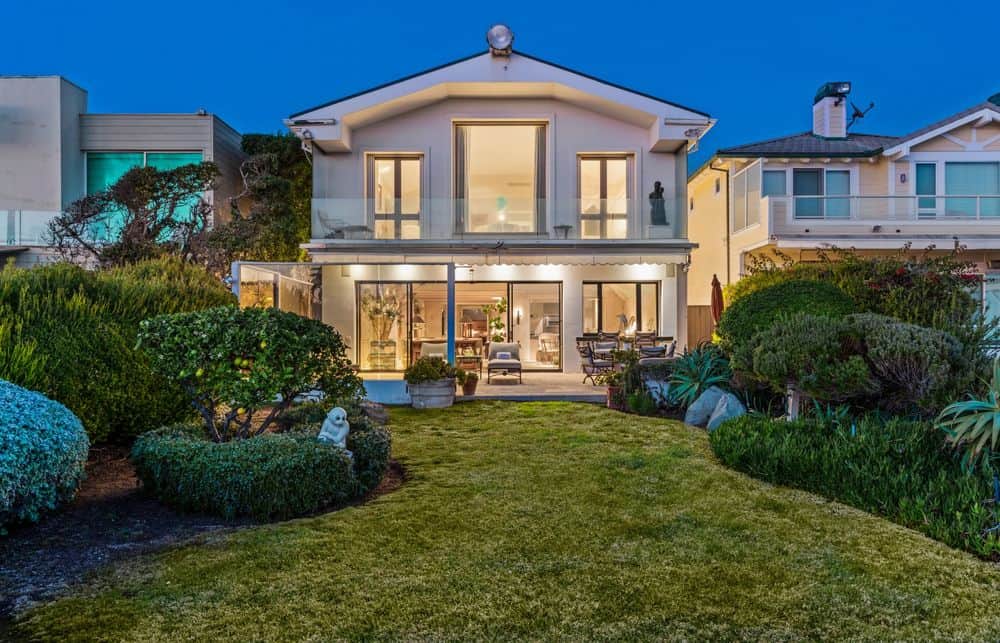 There probably isn’t anyone, anywhere who hasn’t dreamed of moving to the beach, especially when it means living in an enclave as exclusive as Malibu, California. If that describes you to a T, why not live there in style by owning the beach house of the man who invented the style, old Blue-Eyes himself, Frank Sinatra?

That’s right. For a mere $11.5 million you could have owned the beach house of the “Chairman of the Board.” This home that Frank Sinatra and his wife, Barbara, built in Malibu in 1997 was sold in January 2020. 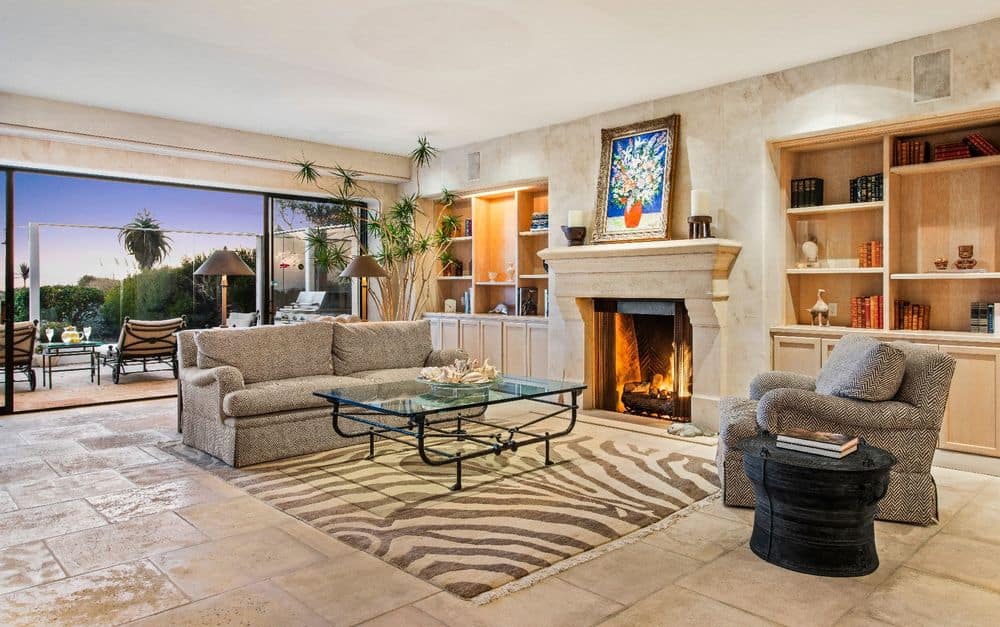 The cozy home has a living room dominated by the large wood-burning fireplace with a beige mantle that matches well with the beige walls, beige flooring and beige ceiling. This living room has a clear view of the backyard through large sliding glass doors on the side. Images courtesy of Toptenrealestatedeals.com. 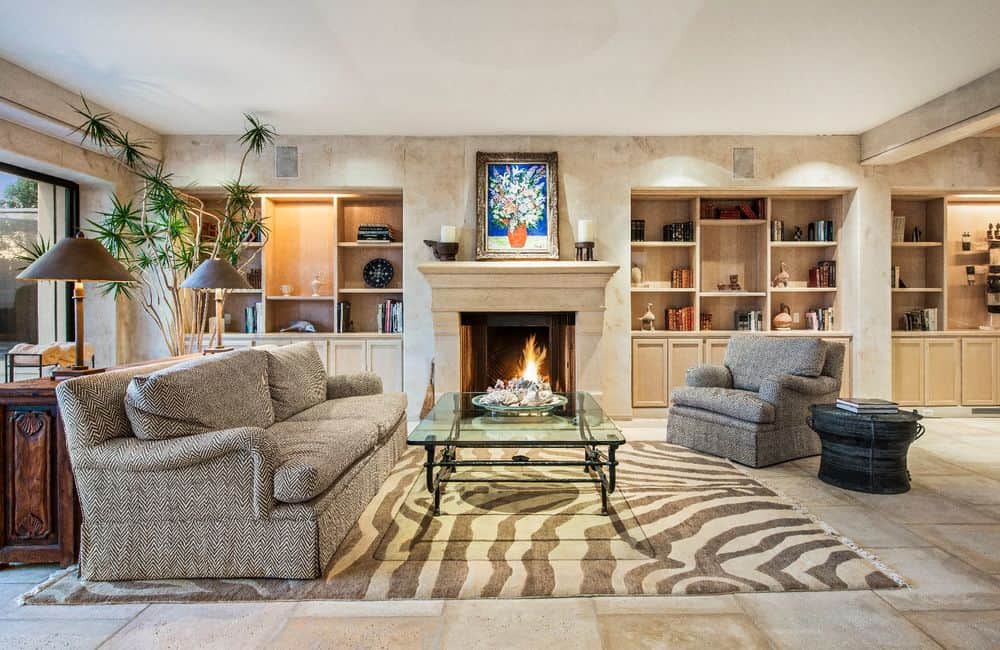 The fireplace of the living room is flanked by embedded built-in shelves and cabinetry making the gray cushioned sofa set stand out paired with a glass-top coffee table on a brown patterned area rug underneath. Images courtesy of Toptenrealestatedeals.com. 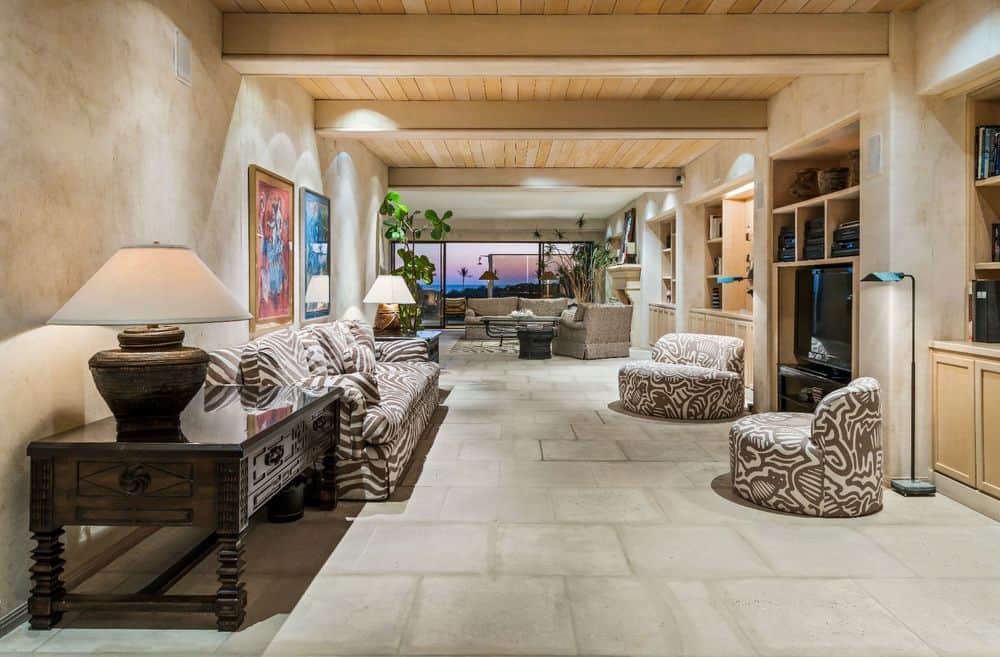 Just a few steps from the living room is this entertainment area complemented by a wooden ceiling with exposed wooden beams. The patterned sofa set of the area is adorned with a couple of artworks and dark brown side tables bearing table lamps. This setup is facing the TV that is housed by a wooden structure built into the wall across from the sofa. Images courtesy of Toptenrealestatedeals.com. 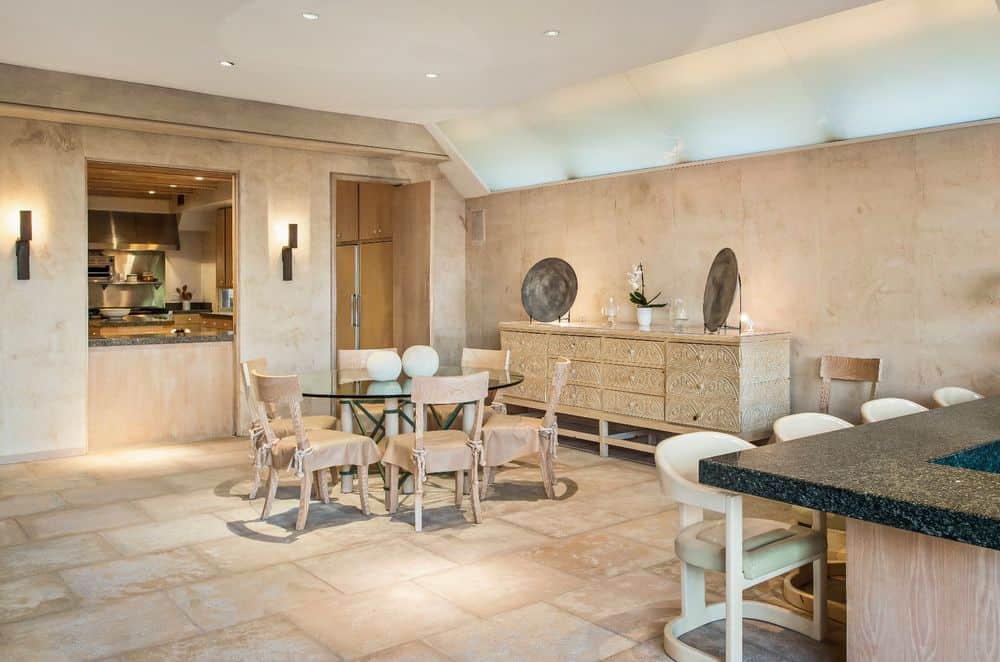 The dining room is just beside the enclosed kitchen with wooden cabinetry and stainless steel elements. The dining room area has a cove ceiling paired with beige walls and beige flooring that has a textured sandy tone that complements the glass-top round dining table and its beige cushioned chairs. Images courtesy of Toptenrealestatedeals.com. 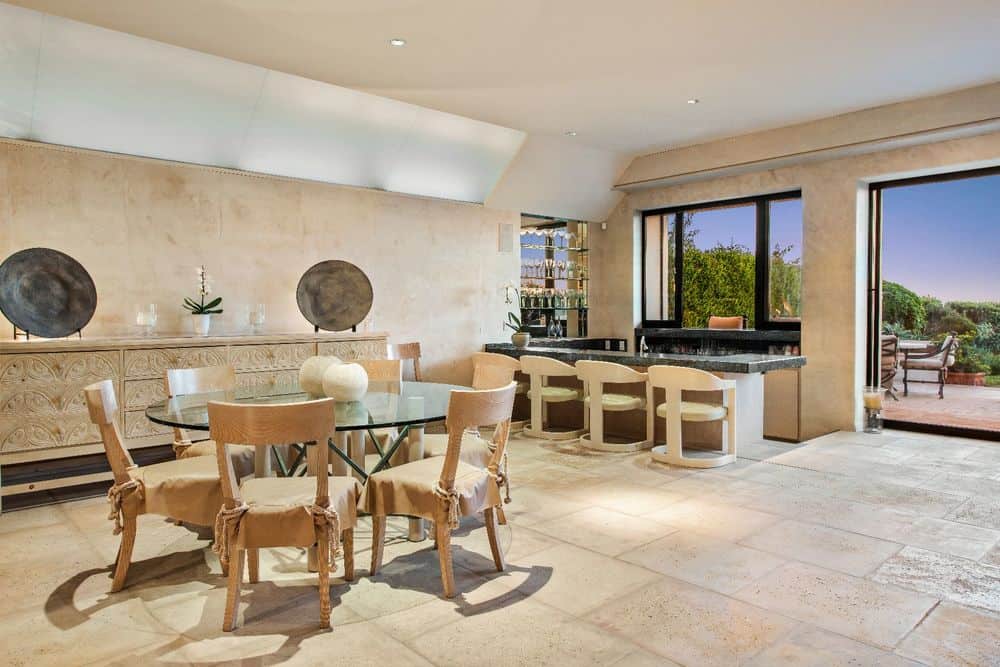 A few steps from this dining area is the wet bar that has embedded glass shelves on a mirrored wall and dark gray countertops paired with charming beige chairs. This area is illuminated by the sliding glass doors and windows that bring in an abundance of natural lighting from the backyard. Images courtesy of Toptenrealestatedeals.com. 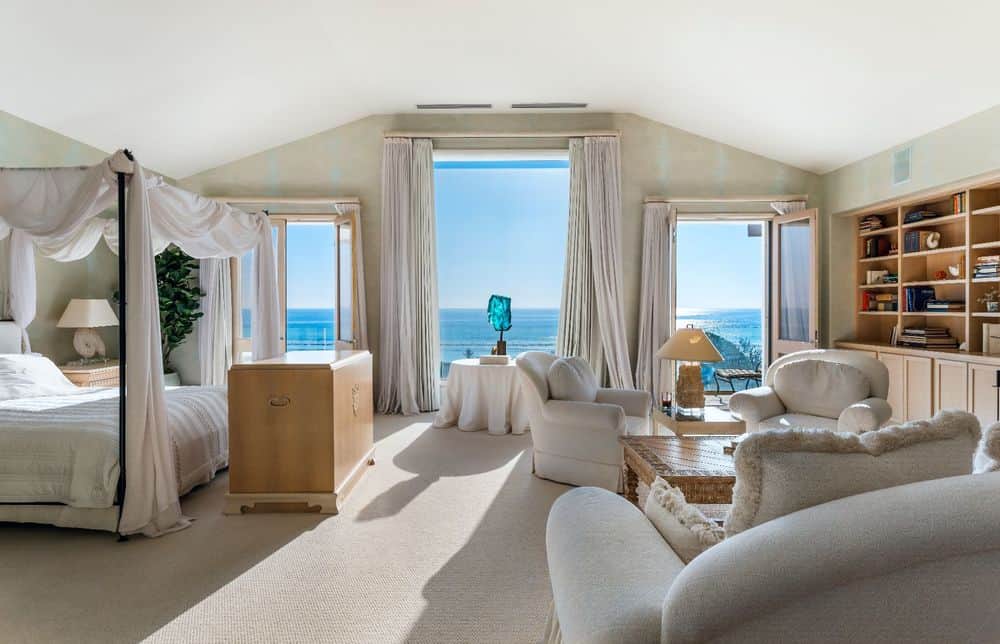 This bedroom has a bright cove ceiling and beige walls that are brightened by the large glass windows that bring in natural lights as well as provide a gorgeous scenic views of the ocean beyond. Images courtesy of Toptenrealestatedeals.com. 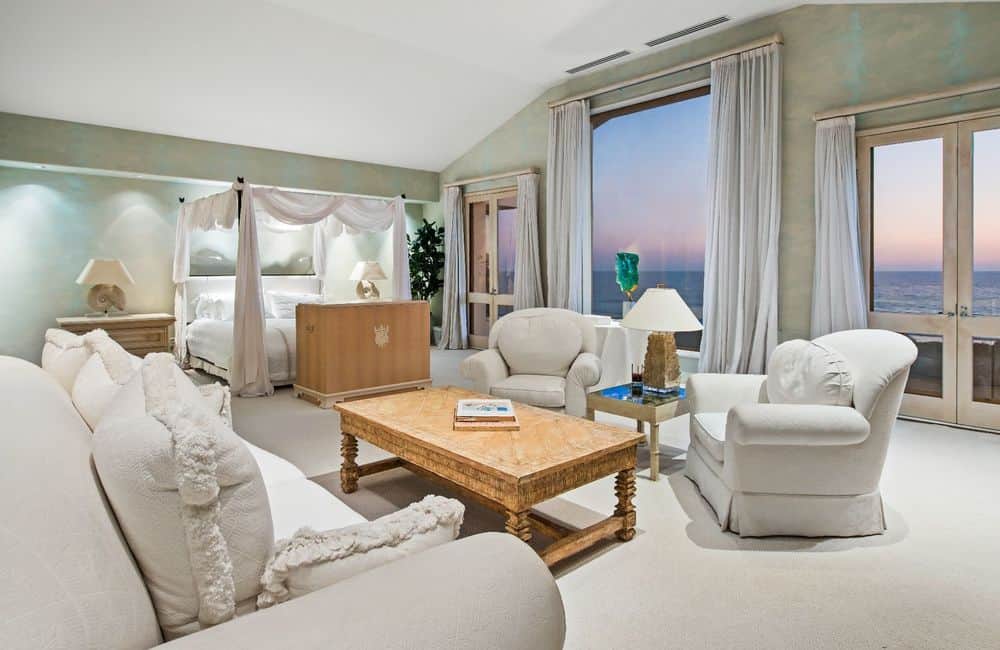 This bedroom has a large sitting area across from the wooden cabinet at the foot of the bed. It has a wooden rectangular coffee table that matches with the cabinet an it is surrounded by a comfortable sofa set. Images courtesy of Toptenrealestatedeals.com. 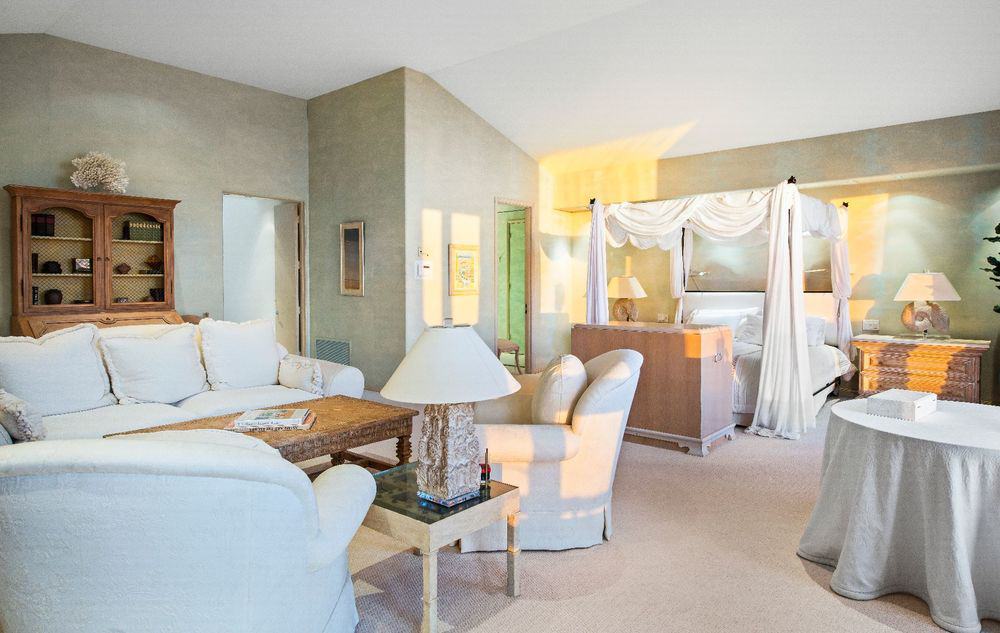 The light gray sofa set of the bedroom sitting area matches perfectly with the light tones of the four-poster bed and its sheets that match the bedside curtains. Images courtesy of Toptenrealestatedeals.com. 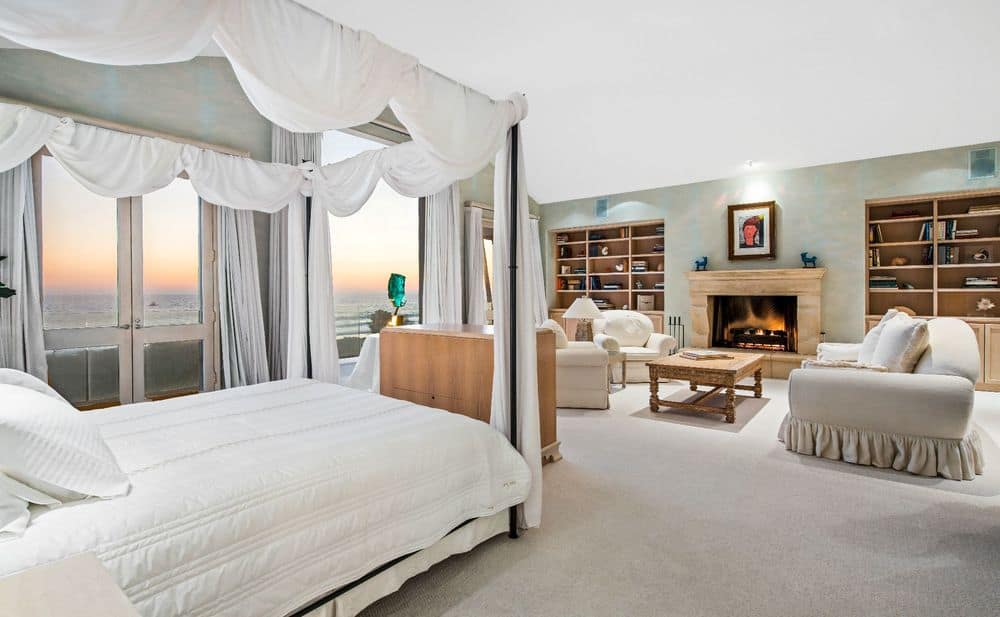 The sitting area of this bedroom is warmed by the large fireplace with a beige stone mantle to counter the cold ocean breeze coming in from the large window that also presents a wonderful scenic view of the ocean. Images courtesy of Toptenrealestatedeals.com. 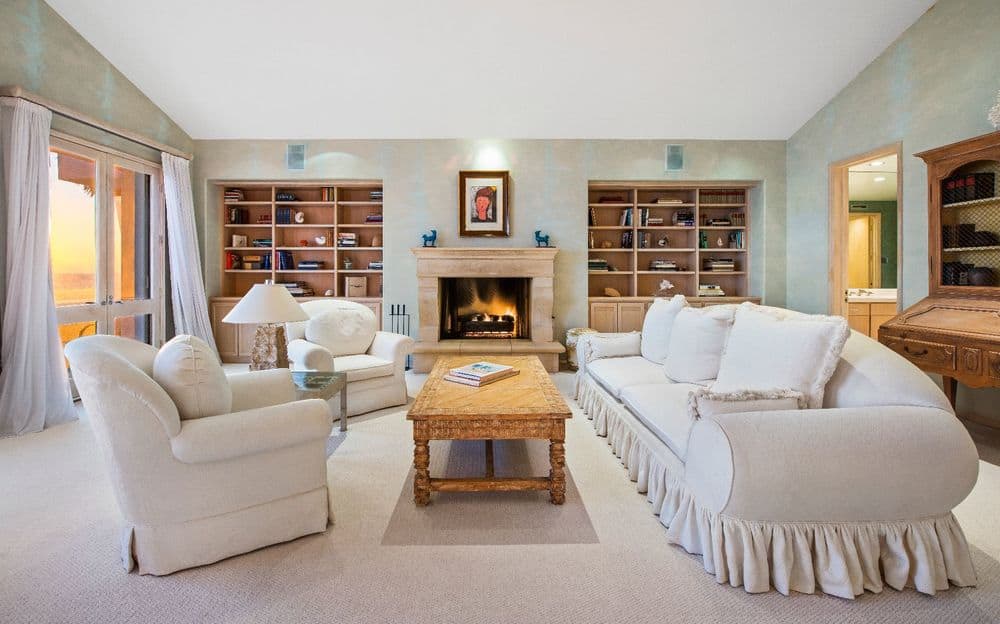 This fireplace at the sitting area is topped with a charming wall-mounted artwork and flanked by two large wooden structures that are embedded into the wall. These structures have shelves and cabinets for books and various decors that add to the homey quality of the comfortable sofa set. Images courtesy of Toptenrealestatedeals.com. 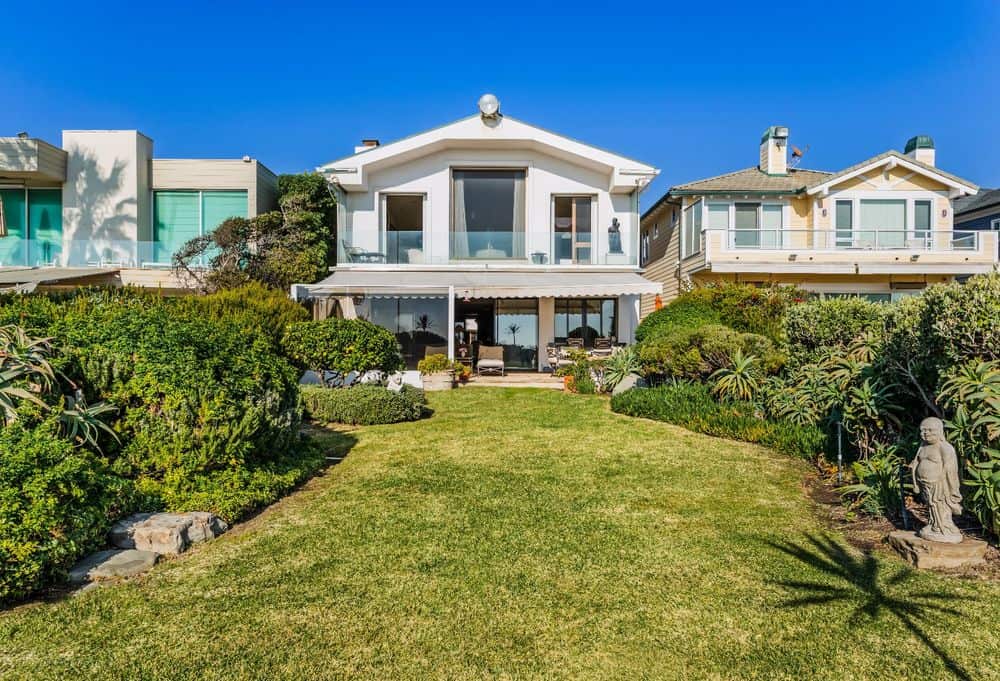 This daytime view of the house from the backyard shows more of its outdoor areas like the patio on the main level and the balcony at the second level just outside the primary bedroom. This balcony has waist-high glass borders to maximize the view of the ocean as well as the lush greenery of the landscaping applied to the backyard filled with medium-sized trees and shrubs to pair with the lawn of grass. Images courtesy of Toptenrealestatedeals.com. 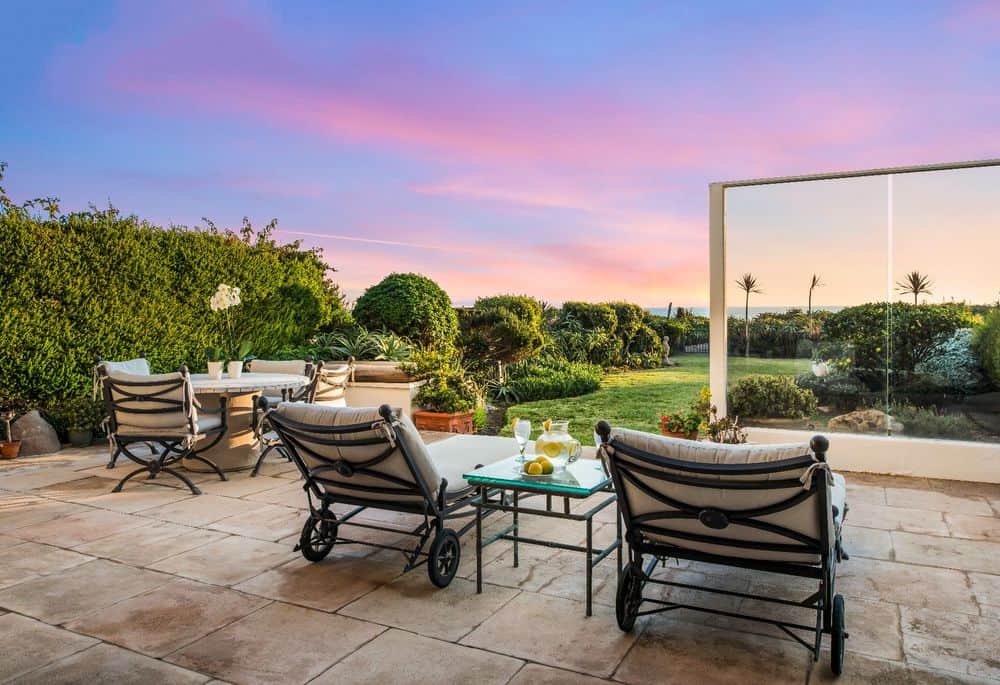 This is a closer look at the patio of the main level that has a couple of comfortable cushioned lawn chairs flanking a glass-top side table. Beside this is the outdoor dining area with a round dining table with a background of tall shrubs. Images courtesy of Toptenrealestatedeals.com. 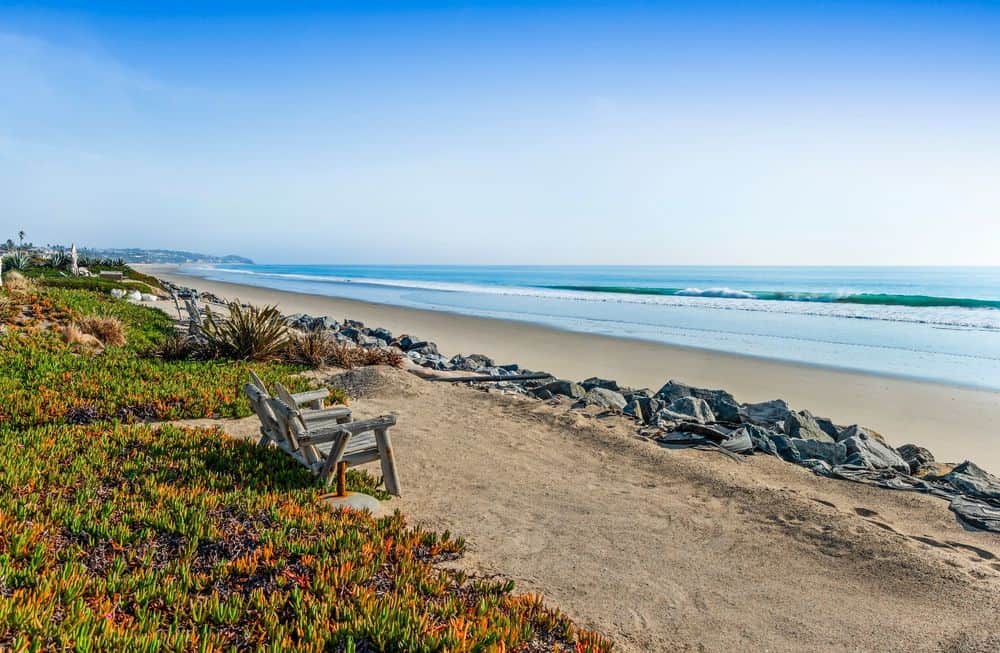 Just a short walk from the backyard is the beach front of the property fitted with a wooden bench perfect for a relaxing view of the ocean amidst colorful flowering shrubbery and rocks. Images courtesy of Toptenrealestatedeals.com.

The seven-bedroom, nine-bathroom house consists of 5,800 square feet of living space and more than 40 feet of beachfront, a pool, and an elevator. Not only that but practically everywhere you look you can almost see the famed Rat Packer himself lounging about and enjoying the relaxing space with his wife by his side.

This home features all sorts of amenities, including modern fixtures and appliances throughout the house. The house also features a large primary suite with a lounge, fireplace, sauna, and even a hair salon. Each bedroom is tastefully decorated for the heavy beach atmosphere where comfort and convenience reign supreme. You can almost rest assured that whatever you want you could probably find it nearby at your beck and call.

The house features decorations that reflect the life and legend that was Frank Sinatra, with not only pictures and mementos, but furniture as well. Whether it’s the fixtures or the home itself, everything compliments the attitude of the man himself. It doesn’t take much to almost want to burst out in song as he would have done when surrounded by all the things that he loved and cherished.

But one can’t help but remember that this is where he relaxed and he finally got time to be by himself. The house reflects the open-air atmosphere that is so indicative of so many Malibu properties, where living isn’t really fully living until the drapes are open and the full panoramic scene of the beach is allowed to breakthrough.

The Sinatras bought the lot situated on the star-studded Broad Beach Road in 1990 and immediately commissioned designer Edward “Ted” Grenzbach to build their dream beach house. In the years since, the house has seen a Hollywood star-studded list of guests, including Bob Newhart, Dick Van Dyke, Don Rickles, Gregory Peck, and many more, according to Barbara Sinatra’s autobiography, “Lady Blue Eyes: My Life with Frank.”

Frank and Barbara Sinatra were married from 1976 until his death in 1998 at age 82; Barbara died in 2017 at age 90. Following her death, the property was transferred to a trust under Robert Marx, Mrs. Sinatra’s son from her first marriage. Only a few months later, the property was sold for $9.55 million.

In July 2019, the house was again put on the market for $12.9 million. The price was later reduced to $11.5 million in January and attracted a buyer within two weeks. The latest price was a 26 percent discount from the original asking price. The latest buyer was reported to be comedian, producer, and actress Mindy Kaling. Fortunately, whatever changes the newest owner might have in mind, there will be plenty of room for it.