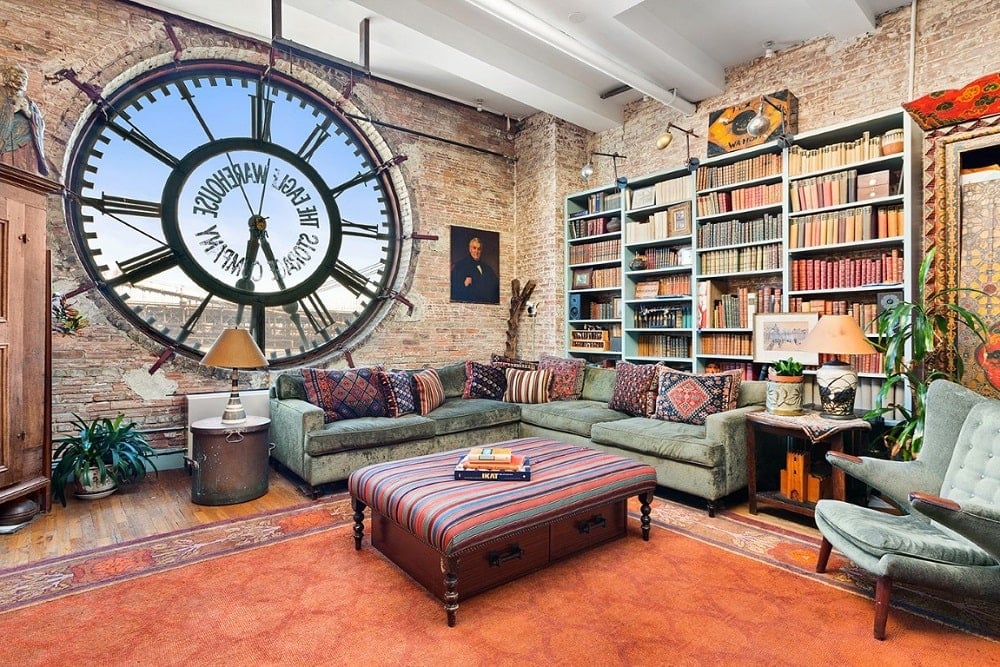 The 1906-era Eagle Warehouse & Storage building in Brooklyn was repurposed into co-op apartments in 1980. The clock tower was converted into a loft and is now on the market priced at $2.35 million.

The loft is measured at 1,260 square feet with one bedroom, one bathroom, the clock apartment living room, and bedroom are large with 16-foot ceilings, hardwood floors, brick walls, and skylights. The loft also boasts of a spa-style bathroom, full kitchen, large walk-in closets, a working clock face with a view of the river and skyline.

The Eagle Warehouse Clock Tower loft in Brooklyn is listed by Nick Gavin and Josh Doyle of Compass Real Estate in Manhattan. 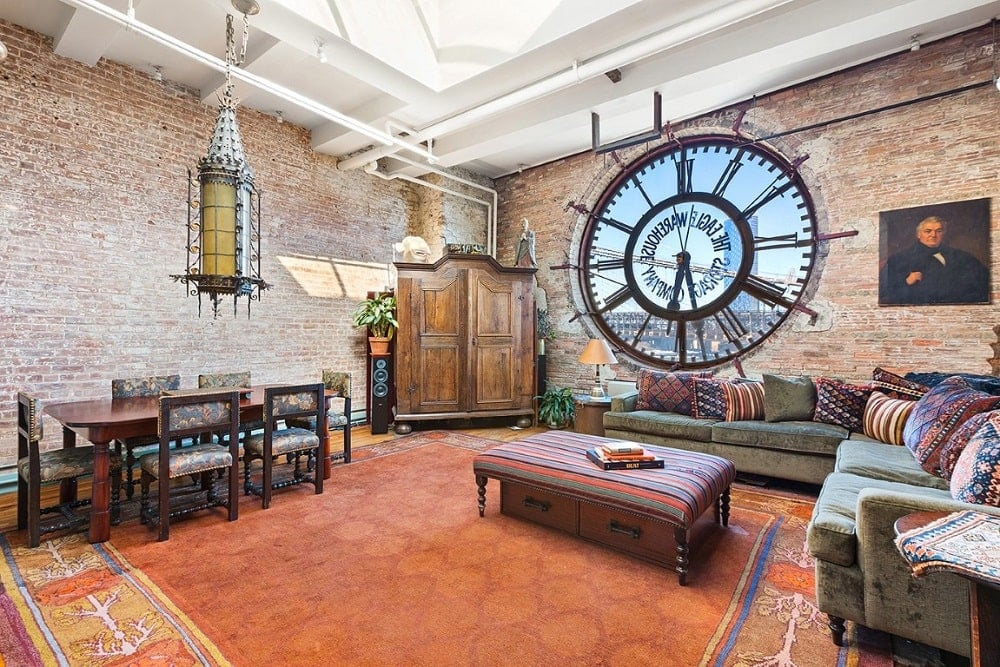 This is the great room of the loft that houses the dining area on the left and the living room area on the right. These are all complemented by the large clock face and the tall red brick walls. Image courtesy of Toptenrealestatedeals.com. 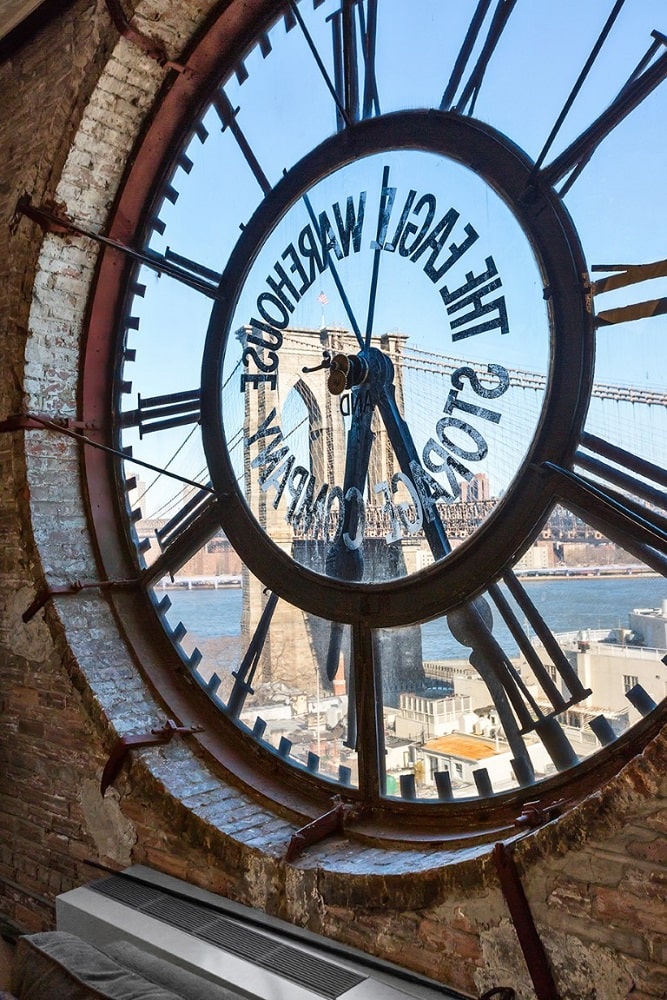 This is a closer look at the clock face of the great room. It also acts as a large glass window that brings in natural lighting and views of the river and skyline. Image courtesy of Toptenrealestatedeals.com. 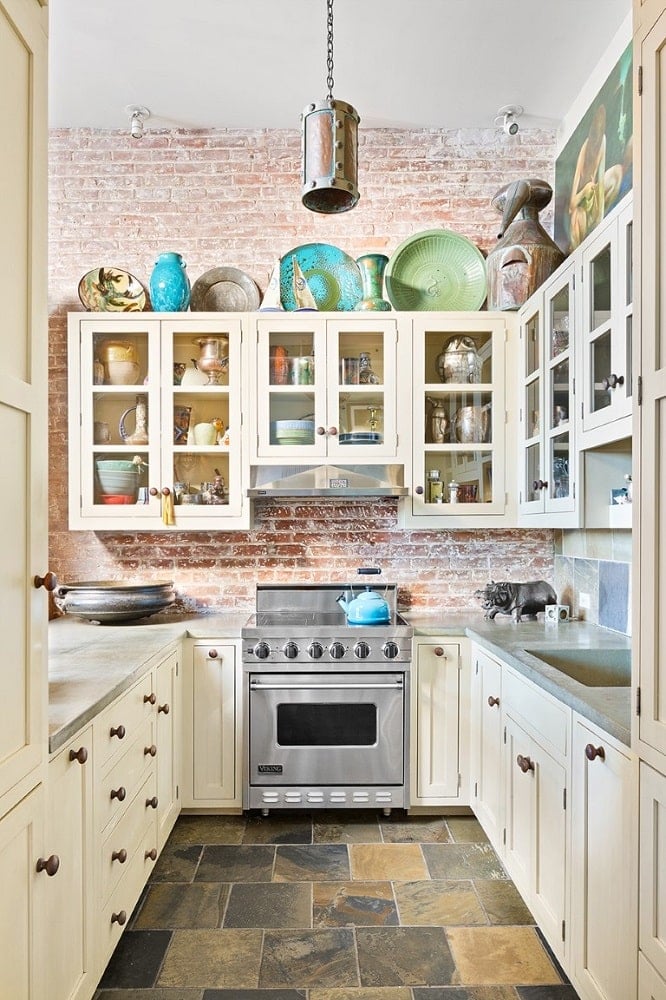 This is a look at the long and narrow kitchen with beige cabinetry to complement the red brick walls. These make the stainless steel appliances stand out. Image courtesy of Toptenrealestatedeals.com. 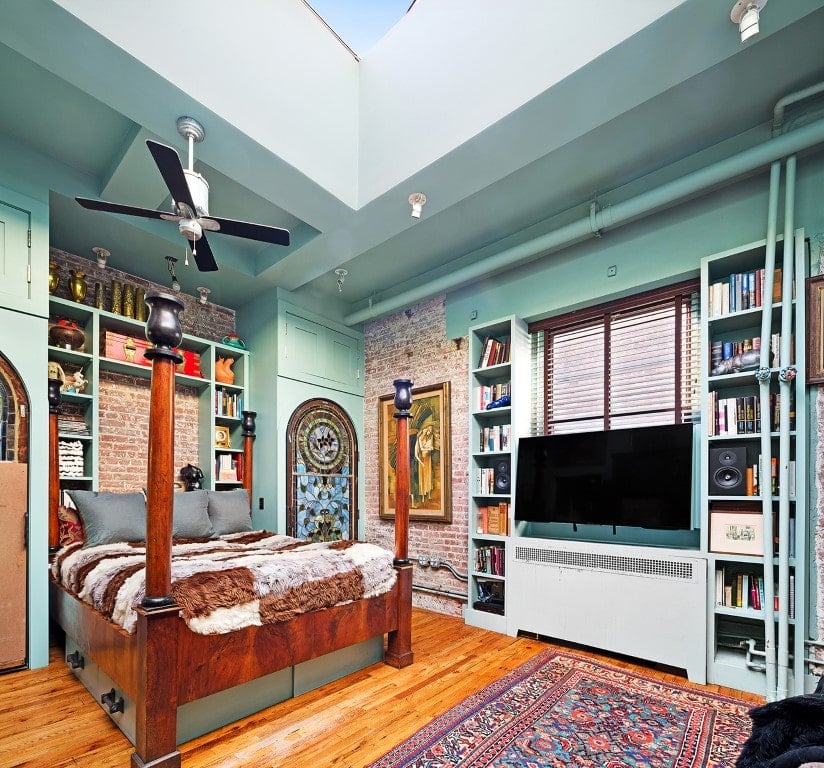 This is the bedroom with a large four-poster wooden bed, green walls with built-in shelves and a skylight that brings in natural lighting. Image courtesy of Toptenrealestatedeals.com. 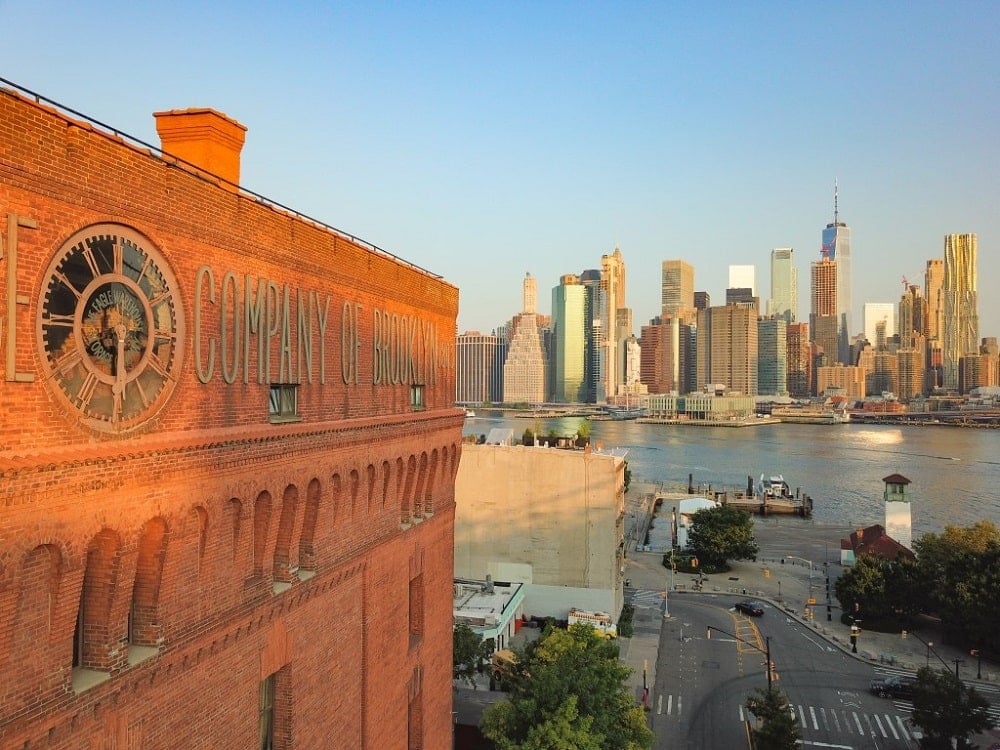 This is the exterior aerial look at the clock face of the loft with vintage signage of the Eagle Company. Image courtesy of Toptenrealestatedeals.com.

Clock towers date back to ancient Greece when the Tower of Winds was built in Athens with eight giant sundials. Famous clock towers include London’s Big Ben, Chicago’s Wrigley Building, and Philadelphia’s City Hall, which was the tallest building in the world from 1894 to 1908.

In the late 1800s and early 1900s, most large towns had one or more businesses that would put clocks near the peak of their buildings or construct clock towers for timekeeping, advertising and prestige. Many of these buildings have been torn down over the years, but some have been maintained and repurposed into condominiums or apartments.

Some of the buildings even have living quarters inside the clocks such as San Francisco’s Schmidt Lithography Company tower that was converted into a penthouse featuring spectacular views through the tower’s four clock faces. Very visible to San Francisco and Oakland commuters on Interstate 80 who have come to depend on the clock as they travel to and from work each day, it was recently for sale at $6 million.

New York City has several prominent clock tower buildings including City Hall and Met Life Tower. One of Brooklyn’s landmark buildings is a clock tower in the 1906-era Eagle Warehouse & Storage building that was repurposed into co-op apartments in 1980. The actual clock tower loft with views of the Brooklyn Bridge, East River, and Empire State Building is now on the market for the first time in 23 years at $2.35 million.

The Eagle Warehouse was one of a number of Brooklyn warehouses close to the riverfront, but it stood out due to its excellent brickwork and simple-but-classic Romanesque Revival style. It was repurposed in 1846 and housed the Brooklyn Eagle, a popular newspaper whose editor was Walt Whitman, one of America’s most important poets, essayists, and journalists.

After the newspaper moved, the building went through multiple tenants and was given city landmark status in 1977 by the New York City Landmarks Preservation Commission. In 1980, it was purchased by a developer who converted it to a luxury co-op of 85 apartments. The clock apartment has always been considered the cherry on the top.

Though only 1,260 square feet with one bedroom and one bath, the clock apartment living room, and bedroom are large with 16-foot ceilings, hardwood floors, brick walls, and massive skylights.

The spa-style bathroom is tiled in Indian slate, the kitchen has top appliances and lots of storage, and there are a plethora of large closets with two being a walk-in. And the crown jewel, a working clock face through which one can see river traffic, a lit Manhattan skyline, or watch the full moon go overhead – from the sofa or from the bed!

The Eagle Warehouse clock tower penthouse has come on the market with full-service amenities that include a doorman, live-in superintendent, on-site manager, bike storage, and a recently renovated fitness center and lobby. Located only a block from a large riverside park and the ferry. Priced at $2.35 million, the listing agents are Nick Gavin and Josh Doyle of Compass, Manhattan office.