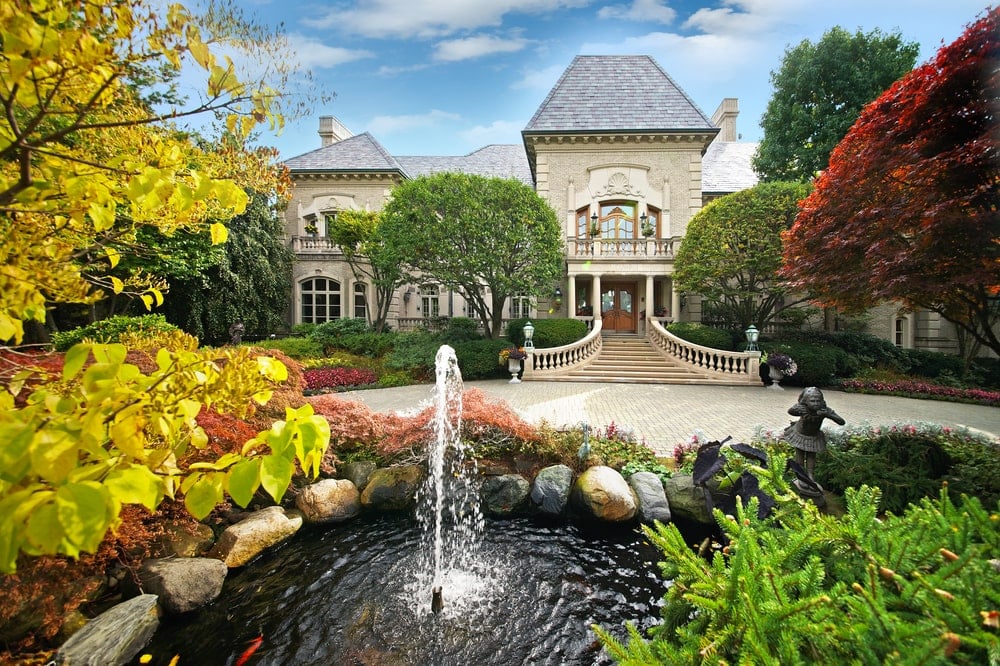 There is a waterfront mansion in Detroit’s blue-blooded neighborhood of Grosse Pointe Shores. It will go to auction on October 28th with no reserve.

The main house has three levels, elevator, two-story foyer with floating staircase, formal rooms, 21-foot ceilings, walls of glass overlooking the lake, a dining room, indoor pool, and spa plus the outdoor pool and spa, a primary bedroom with sitting room, fireplace, balcony, and a huge walk-through closet. It also boasts of a family room with its own kitchen, bar, and media area, and a child’s room and playroom. The property has a total of seven bedrooms and thirteen bathrooms.

The auction on October 28th for this waterfront property inside Detroit’s upscale suburbs is handled by Grand Estates Auction.

The man on the street is still thinking about Detroit as a fallen city; a virtual wasteland reduced to slum and crime. Entrepreneurs and forward thinkers, however, know a good thing when they see it and are scouting around looking to pounce on the good deals because they know their time is limited. As all things in the universe follow an up and down curve, so does the vibrancy of a city.

As is always true, smart people recognize this fact and look to take advantage of the lows so they can enjoy the uphill ride. The other fact they know is that nothing lasts forever, especially the good deals. Two years ago in 2011, former yacht dealer Bill McMachen knew a good thing when he saw it and for $4 million in back tax liens, bought all the foreclosed properties in Detroit’s Macomb County. He knows he can make $2 million selling them to rehabbers and is well on the way.

Just last week, the Wall Street Journal reported that the city had made a deal with its largest creditor. According to the Journal, “Under the plan, the city will knock down its fabled but soon-to-be-vacant Joe Louis Arena, home of the Detroit Red Wings professional hockey team, to make way for redevelopment led by Financial Guarantee Insurance Co., which the city owes about $1 billion.” This move could easily pull the city completely out of bankruptcy.

For some time now, good old fashioned American entrepreneurship led by young visionaries has been rebuilding the city from the inside out. Midtown Detroit, which had practically been a ghost town, is now one of the most successful areas of the city with an increasing number of young professionals moving in at a 96% residential rate enjoying expanding retail and entertainment venues.

Downtown, Midtown, and the New Center areas where 57% are between ages 25 to 34, 45% had bachelor’s degrees and 34% with master’s or professional degrees proves an unheralded upswing. They need places to live and places to shop, so it comes Whole Foods Market and the new $72 million shopping center, Gateway Plaza in Palmer Park, a new light rail system and Michigan billionaire, Mike Ilitch is doing his part by establishing a new arena in the entertainment district.

The trick is to get in now before the boom becomes obvious to everyone else and snap up an elegant mansion in a historically elegant neighborhood so you have a vantage point from which to watch the rebirth while watching your property values skyrocket.

One of the best vantage points seen in a long time is from this fabulous waterfront estate in Grosse Pointe Shores going to no reserve auction on October 28th. Perfect right down to the height of every blade of grass, entry is through a private, gated drive that brings one into the 3.75-acre property with the main house, carriage house with guest apartment, 265 feet of Lake St. Clair shoreline, tennis court, putting green, gazebo and sports court all laid out on professionally landscaped grounds.

The mansion itself is comprised of three levels with elevator and two-story foyer with floating staircase. Formal rooms are palace-sized with a massive formal living room with 21-foot ceilings, walls of glass overlooking Lake St. Clair, and a dining room measuring 36 feet with seating for 26.

Including the guest apartment over the carriage house, there are seven bedrooms and thirteen baths, an indoor pool, and spa plus the outdoor pool and spa, a to-die-for master suite with a sitting room, a fireplace, balcony, and huge walk-through closet. The family room is so large it has its own kitchen, bar, and media area, and one of the unexpected highlights is the over-the-top fantasy child’s room and playroom. All this and so much more, make this auction one of the year’s best.