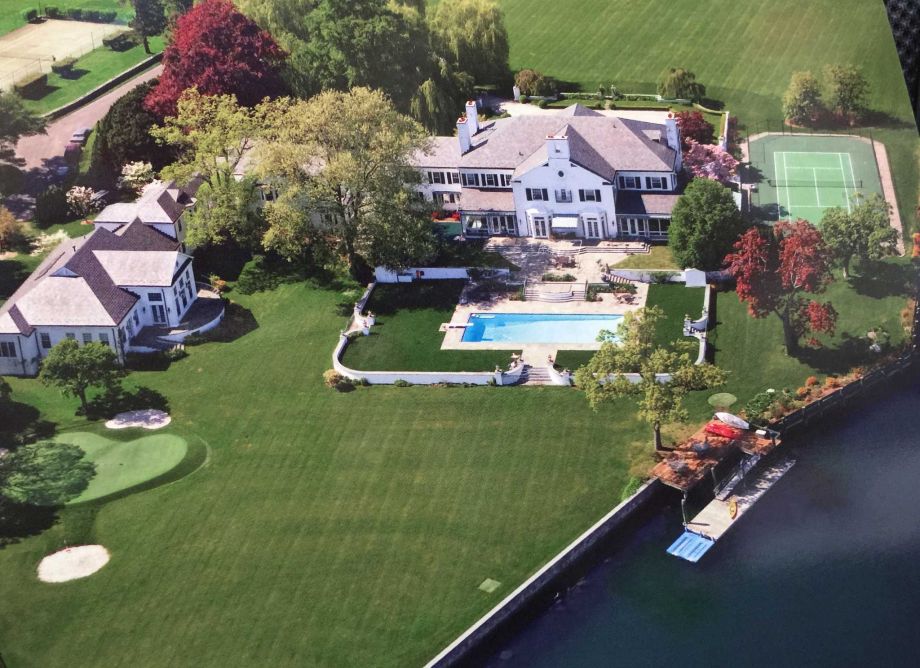 The Greenwich Village, Connecticut mansion that has been owned by President Donald Trump and former wife Ivana is on the market. The home, which was built in 1939 and was purchased by the Trumps $4 million as a “starter” mansion in the early ’80s. It is now on the market for a mere $45 million.

Donald Trump was 35 years old when and Ivana purchased their first mansion. The estate sat on nearly six acres of prime waterfront property. In 1991, Ivana received the home in the couple’s divorce settlement. In 1998, she sold it to financier Robert Steinberg and his wife Suzanne for $15 million. 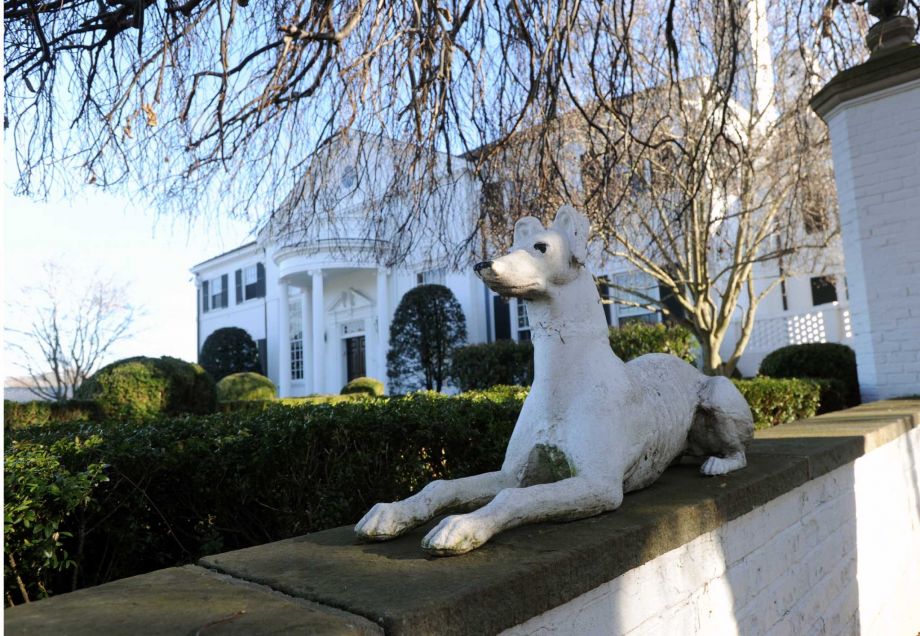 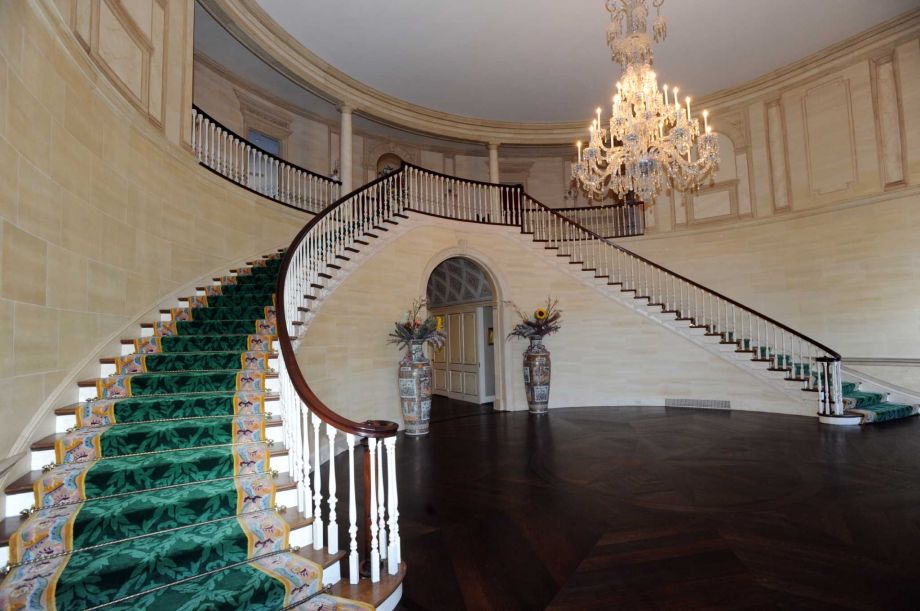 Upon entry of the house, you are welcomed by this grand foyer that has a couple of curved staircases as well as a large chandelier. Image courtesy of Toptenrealestatedeals.com. 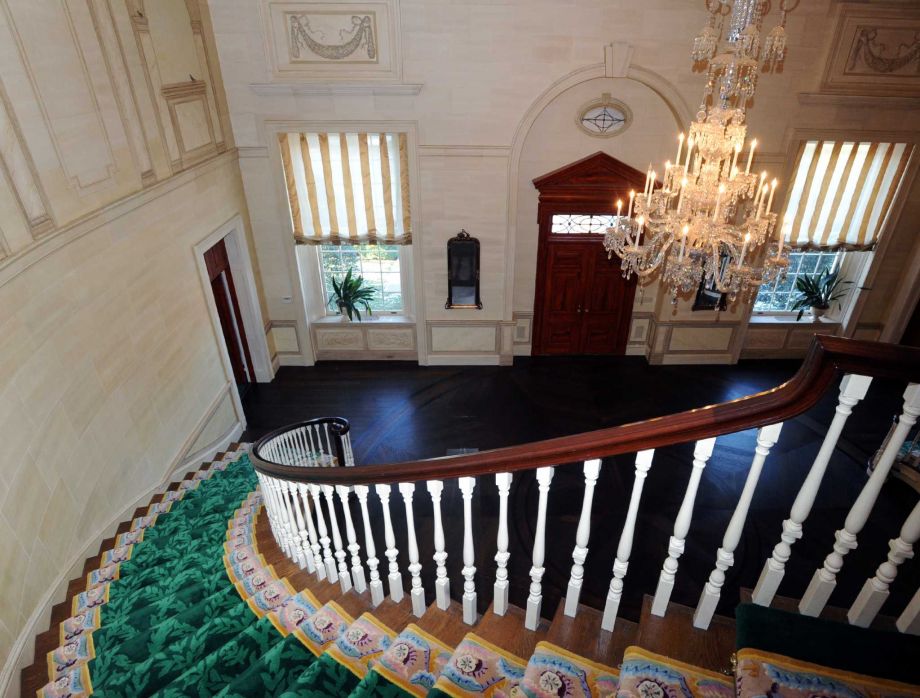 This is a look at the foyer from the vantage of the second-floor landing. Here you can see one of the two curved staircases of the foyer with green carpeting on its steps. Image courtesy of Toptenrealestatedeals.com. 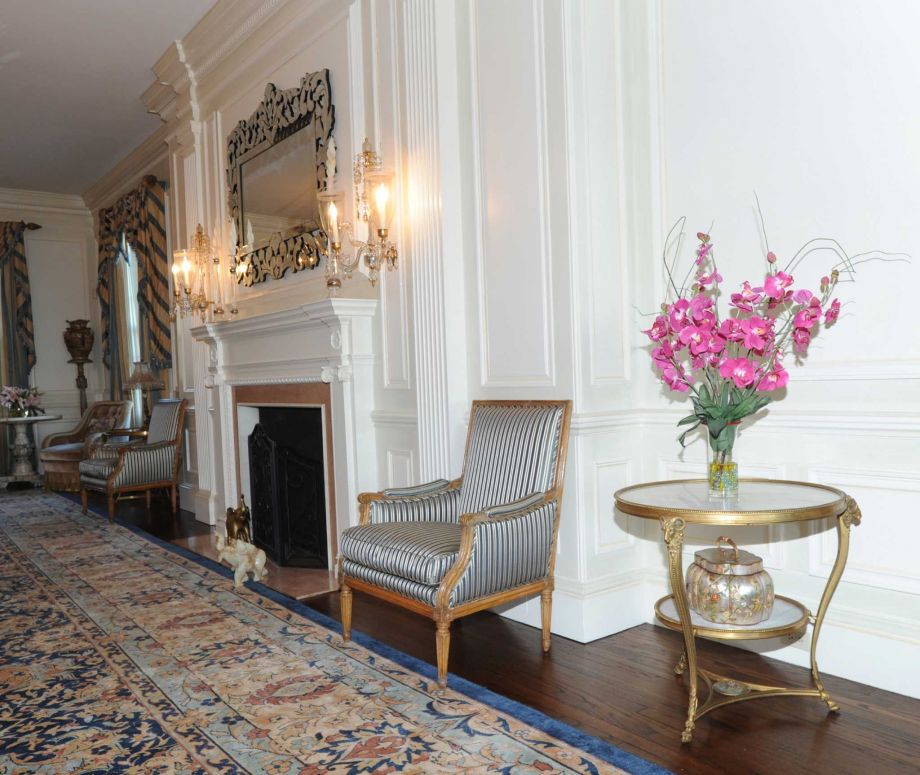 This is a close look at the living room that has a large fireplace with a white mantle topped by a painting and flanked by sconces. Image courtesy of Toptenrealestatedeals.com. 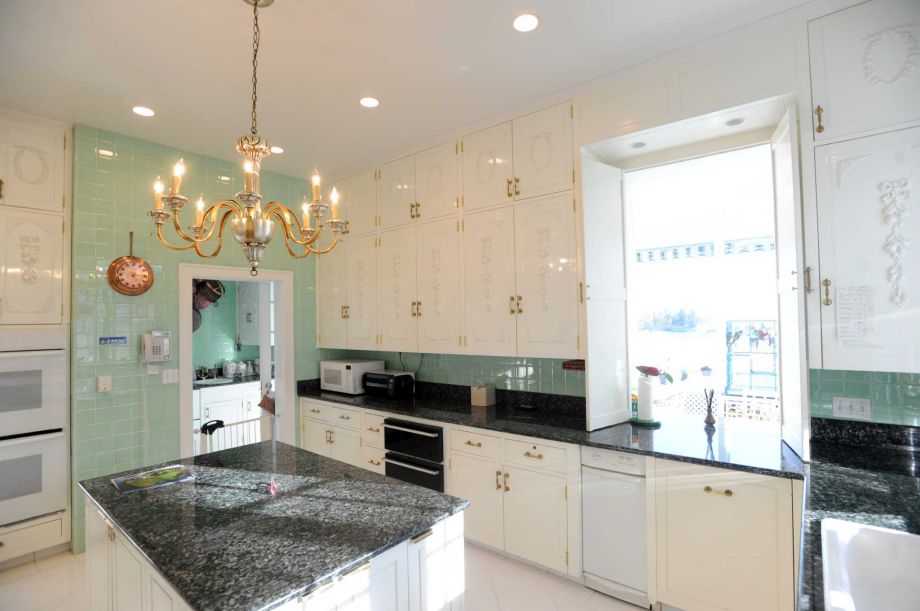 The kitchen has consistent beige tones to its cabinetry and ceiling contrasted by the black countertops and backsplash. Image courtesy of Toptenrealestatedeals.com. 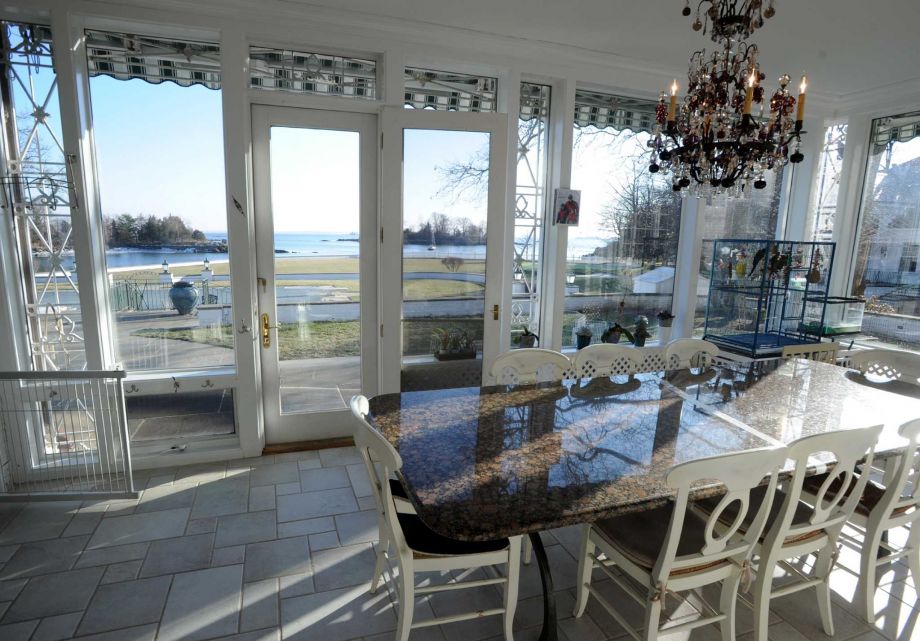 This is the informal dining area just a few steps from the kitchen. This has a dark marble dining table matched by the cushions of the chairs with white wooden frames. These are complemented by the natural lights coming in from the glass walls and doors. Image courtesy of Toptenrealestatedeals.com. 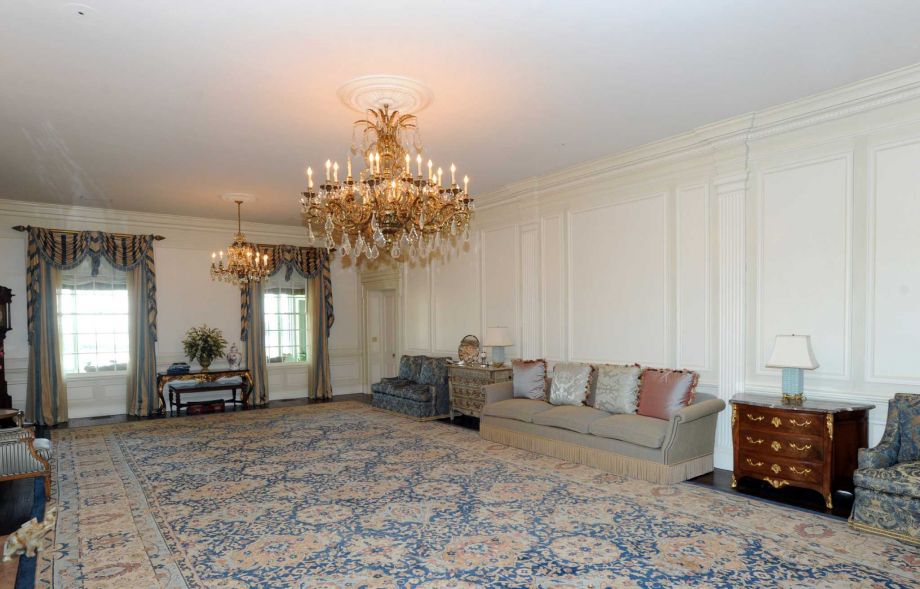 The family room has a spacious open area fitted with a floral patterned area rug that almost covers the whole floor. On the side against the wall is a sofa and in the middle of the room hangs a large chandelier. Image courtesy of Toptenrealestatedeals.com. 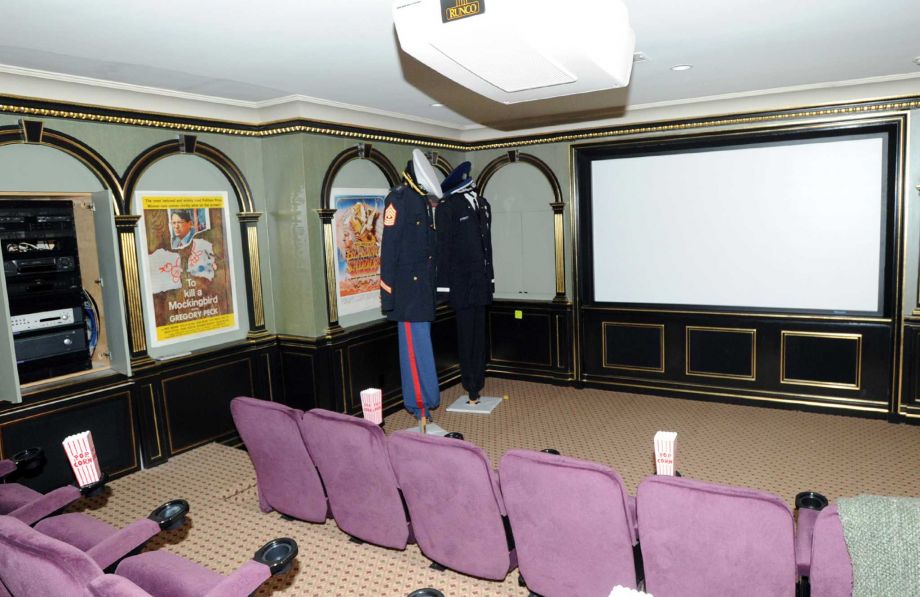 This is the home theater room of the mansion with a large screen at the far end across from rows of pink upholstered theater chairs. Image courtesy of Toptenrealestatedeals.com. 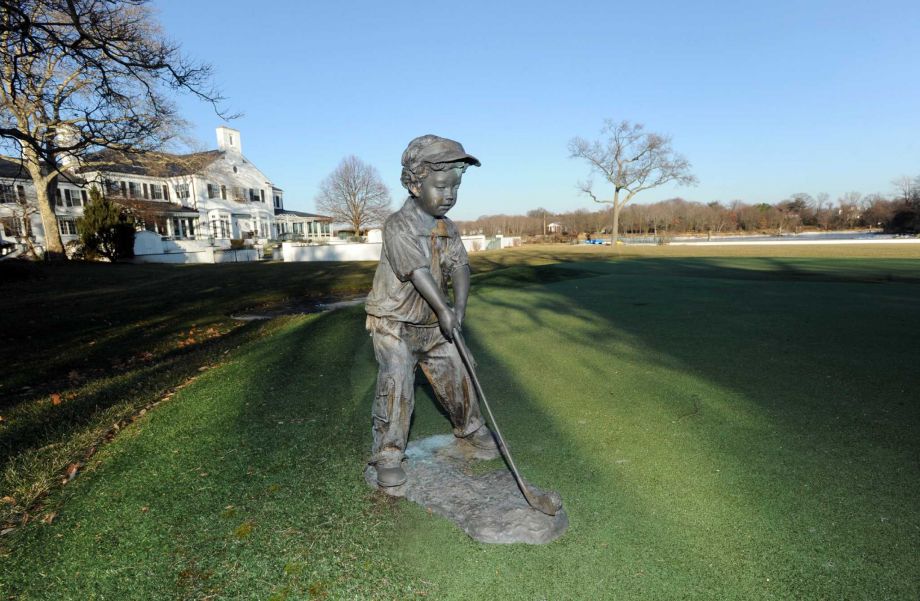 This is a close look at the putting green a few yards from the house. Here you can see that there is a statue of a child playing golf. Image courtesy of Toptenrealestatedeals.com. 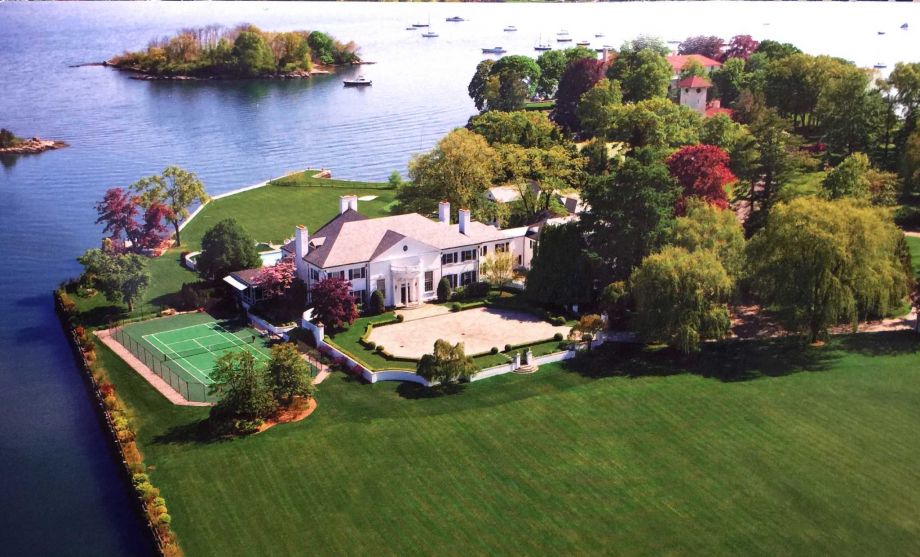 This is an aerial view of the mansion showcasing the light beige tone of the house exteriors making it stand out against the surrounding landscape of trees, shrubs and grass lawns. Image courtesy of Toptenrealestatedeals.com.

The Steinbergs were attracted to the homes’ incredible views of Long Island Sound. They were drawn to the properties’ other outdoor amenities which included a private boat dock on Indian Harbor. It also included a putting green, tennis court, pool, and a myriad of outside terraces perfect for entertaining.

The interior of the 19,773 square foot estate is even more impressive. While living in the mansion the Trumps decorated it in an ornate style with a lot of gold leaf and many of the other decorative products that had been used in the remodeling of Trumps’ Plaza Hotel. The new owners rid the home of many of the lavish décor making it much or livable, but still elegant in a more subtle way.

Upon entering the expansive Georgian Colonial mansion, you are met by a double grand staircase and a three-story rotunda. The mansion has 10 bedrooms, 13 baths, several formal dining, and many entertaining areas throughout the home.

After purchasing the mansion, the Steinberg’s made many additions and renovations to the glitzy property. They expanded the property by adding a tennis court, indoor lap pool, and sauna. They built a 4,000-square-foot addition with guest suites and three fully-equipped staff residences. The home features a subterranean theater room, several terraces, and patios with exquisite views making it perfect for entertaining. The home has an abundance of unique features worthy of a high-end resort.

The Steinberg’s put the house on the market in 2014 with a listing price of $54 million. The property did not sell at that price so decided to relist the home at its current price of $45 million.

Unless you have been living off-planet Earth for the last four years. Entrepreneur Donald Trump is now president of the United States. He owns a number of properties, Albemarle Estate, a Virginia vineyard and winery complete with a 23,00 square foot home. This has been transformed into a B&B. Trump also owns a home on Rodeo Drive in Beverly Hills.

There’s no doubt that his trophy home is his Mar-A-Lago mansion and resort in Palm Beach which he purchased in 1985 for a mere $10 million. This property is considered the southern White House where he holds numerous political events and has entertained many international leaders, heads of state, entertainers, and athletes.