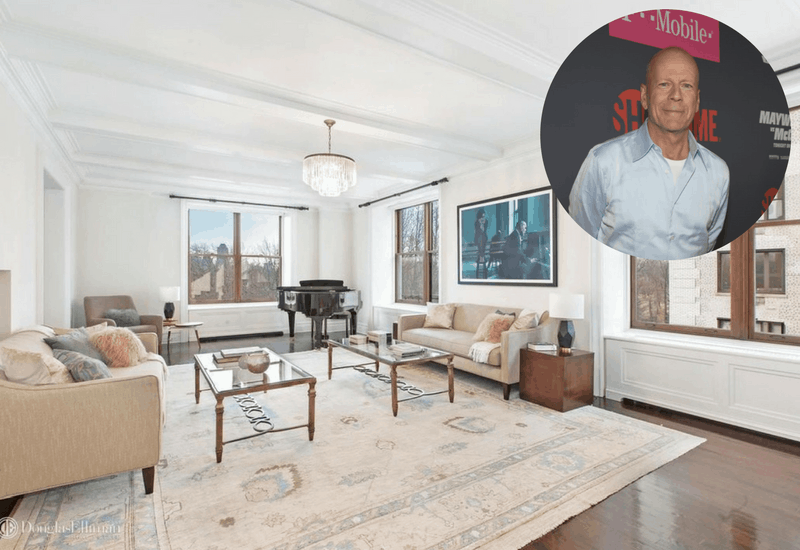 German-born American actor, producer and singer Bruce Willis has a long-running and prolific acting career that took off in the 1980s. He’s appeared in more than 60 films encompassing a broad range of genres that include comedy, drama and action.

The “Die Hard” star began on the small screen and starred in the comedy-drama television series “Moonlighting” (1985-1989). The show garnered Willis an Emmy Award for Outstanding Lead Actor in a Drama Series and a Golden Globe Award for Best Actor – Television Series Musical or Comedy.

Located in the Upper West Side of Manhattan, Willis bought the NYC duplex only a couple of years ago for $16.995 million. The picture-perfect apartment stands in a prewar co-op building originally built in 1913. The spacious Central Park West home encompasses 6000 square feet that boasts of 150 feet of frontage, six bedrooms and four-and-a-half bathrooms. Typical of the NYC co-op, the property also comes with a full-time elevator operator, live-in resident manager and building amenities such as a bike room and an outdoor half-basketball court.

Large picture windows: Each room looks even more elegant because of the breathtaking sceneries of Manhattan and the park brought even closer by the presence of these large picture windows. It’s easier to relax when you’re overlooking an urban green space.

Primary suite: It comes with a sitting room and a luxurious primary bathroom with a steam shower and, of course, Central Park views from a separate soaking tub.

Check out the full photo gallery below of Bruce Willis’ home.

This is a real treat. The home below is one of my all time favorite celebrity houses. It’s a spectacular 8,000 square foot home on 14 acres with incredible views.

Check out this incredible home Bruce Willis purchased for $9 million.